A full day of cross-country was scheduled for Training, Preliminary, Intermediate, and Advanced at The Colorado Horse Park in Parker, Colorado for the second day of competition in the 2018 USEA American Eventing Championships (AEC) presented by Nutrena® Feeds, but the weather had other ideas and lightning and thunder cut the day short. Only Training and three of the four Preliminary divisions had their chance to leave the start box on Tremaine Cooper’s cross-country course.

The Junior/Young Rider Preliminary division saw a new combination rise to the top of the leaderboard as Madelyn Floyd and her own Clementine, a 9-year-old Hanoverian mare (Carrico x La Belle), took over the lead after the second phase of competition and head into show jumping tomorrow on a score of 29.5 after cross-country. “The course rode great,” said Floyd, “My mare was super good, and I was really happy with the overall performance. This is our first year doing the full Preliminary level, so I have been really proud of her. She was super bold and confident to everything, and just gave me a nice overall feel. I just came off of the Intermediate at Woodside which gave me some preparation, it was a bit big but it was a competitive track and I enjoyed it. She and I both love cross-country!”

The 15-year-old Washington native has never competed at the AEC before, and was excited to have it closer to home this year. “I’ve never been here to CHP before,” she explained, “and this is my first AEC. It was really exciting for me, because I couldn’t have made it to the East Coast with school and stuff, so I was very happy to find out it was coming to the Midwest.”

The division will conclude with show jumping tomorrow and Floyd will look to keep her grasp on the lead ahead of Camryn Holcomb and Michaela Holcomb’s Cloud Nine, a 13-year-old Thoroughbred gelding, who are currently in second place with a 32.7 and Callia Englund and her own Xyder, an 8-year-old Cheval Canadien gelding (D D D-Cromwell Prince 2 I x Cosyland Start Kandi) who sit in third place on a 42.3 after cross-country.

“I wasn’t sure how the time was going to run,” commented Smith. “We metered it and it was pretty right on, so I figured that the time wouldn’t be super hard to make, but it actually was hard to make, and the course rode a lot more tough than I had anticipated. That mare is pretty experienced and she had her eyes open. I had to ride. All the questions were fair. I thought it presented itself very well. It’s a championship. It should be at the top of the level. I thought Tremaine [Cooper] did a great job with the design. It was very much a championship course.”

Of her plan for the final phase on the “workman” mount, Smith explained, “She’s a good jumper, I’m really happy to be on her going into day three. I mean, she can occasionally have a rail. She tries really hard and she’s a good jumper, so I’m hoping that it works out great.”

Second place in the division is currently held by Gina Economou and Lauren Rath’s 13-year-old Thoroughbred gelding Syntax (Devil His Due x Synful Maid), who are riding into the show jumping phase on a score of 30.4. Smith also rounds out the top three on the MB Group LLC’s MB MaiBlume, an 8-year-old German Sport Horse/Thoroughbred gelding (Sir Schiwago x Free Lady), jumping double clean around the track to continue forward on their dressage score of 31.9.

Erin Hofmann of Utah and her own Darkwatch, a 2008 Thoroughbred gelding (Royal Academy x Without), climbed to the top of the Preliminary Amateur division, mastering the track and maintaining their dressage score of 32.4 to hold top honors leading into show jumping tomorrow.

“Our cross-country run today was really good,” said Hofmann, “I was a little nervous at the beginning, but my horse is really bold and likes a good galloping course so it was a good fit for him. It was a lot of fun, and it rode really well.”

Hofmann, who is originally from the midwest, has competed in every Area across the United States. Despite that fact, this is her first time competing at the AEC. She continued, “I was at the very first AEC as a volunteer, but this is my first AEC as a competitor. It’s so nice to be here, and to have this in our home court is a dream. We love coming here, it’s a great facility and a great event.”

Julia Spatt piloted her own 5o1 Macintosh, an 8-year-old Belgian Warmblood gelding to second in the standings, collecting an additional 0.8 time penalties for a score of 35.1. Darlene McInnes and her own Speed Bump, an 8-year-old Thoroughbred gelding (Pomeroy x Everdream) secured third place after crossing through the finish to sit on a 35.5.

Washington’s Eva Jacroux held her lead aboard her 12-year-old Zweibrucker gelding (Radikal x When the Worlds Unite), Rubel, in the Junior Training division after cruising around cross-country to remain on their score of 31.4. “Rue was really good today,” Jacroux commented. “We were a little sticky in warm up, but as soon as we got out there it was fun! Today I really went out with the goal to not pick up any time faults, so I worked on going a little more forward than I normally do. He was good and seemed to like being pushed a bit more. All of the jumps seemed friendly, but there were some tricky questions in there, which is what this is all about.”

With potential to hold the lead through tomorrow’s final phase of competition, Jacroux noted her plan for show jumping: “It’s always been the toughest phase for us, so tomorrow I want to make sure that I do my job to the best of my ability, so that he can try his hardest for me too. Hopefully it’ll work out!”

“She’s six this year, and she’s for sale,” noted Jahnke. “We imported her last year with the idea of a resale. We got her out of Ireland and she’s been with me for about a year and a half now. I click well with her. She’s lovely, super sweet, and a really nice horse.”

Of the day’s cross-country course, Jahnke said, “I thought it was a really nice course. Definitely the biggest course this mare has ever jumped – she’s super young. It was a challenge, but fair. It was beautifully decorated, and they made really good use of the terrain. I thought everything rode really well.”

McKenzie Rollins of moved into second place with Excel Star Lord, a 6-year-old Irish Sport Horse gelding (Non-Stop x Korea B), with a 34.9. Third place is currently being held by Marc Grandia aboard Michelle Jones’ Command N’ Rule, a 19-year-old Thoroughbred gelding, on a score of 35.5 penalties.

Colorado native Linda Quist and her 14-year-old Iberian Warmblood mare Belle Gambe (Temerario VII x Mojave) maintained their lead in the Training Amateur division after a solid day of cross-country competition. The pair added no time penalties or faults to their dressage score of 27.3.

“I thought it was a very fun course,” said Quist, “and my horse was a rockstar. It just flowed really nicely, one thing came to you after the next. The big jumps were big, but nothing too hard to handle!”

As for tomorrow, Quist is prepared to go for the win with the hope of capturing top titles in the division. She explained “Going into tomorrow, I’m just going to try really hard to leave all of the rails up. She likes show jumping, but she wants to jump stadium like it’s cross-country, so it’s our tough spot.”

The second and third place positions saw a change as Cherye Huber and her own Sam I Am, a 12-year-old British Sport Horse gelding (Cameo’s Reflection x Castle War Rebel), moved up from fifth to secure second place moving into tomorrow’s show jumping competition with 30.2 penalties. Dawn Robbins and her own Diablo Tejano, a 15-year-old Thoroughbred gelding (Sandpit x Soar Like An Eagle) also jumped up the leaderboard from ninth place and now move into their final phase on a 31.1.

California native Tracy Alves and her own 20-year-old Dutch Warmblood gelding Romulus (Contango x Divottii) overtook the lead in the Training Rider division after dashing around the cross-country track. Looking to secure top honors in the division after the completion of the final phase tomorrow, the pair will move forward on a score of 26.8.

Alves has been riding the gelding for four years now, and commented, “We’ve only had one solid year of showing because we had two years of quarter cracks and other things that we were dealing with. This is our first year back, but it’s also his retirement year so today was our final competitive cross-country together. I’d like him to dabble in some dressage moving forward, but I won’t be doing the cross-country with him, because I’ve just found that the conditioning for it can take a toll on him.”

She continued, “People tend to think that his strongest phase is dressage because he has a good education, but his favorite phase is cross-country. Yesterday he was really quiet in the warm-up, and I thought ‘oh man, he’s behind my leg and I’m in trouble!’ when we got in the ring and started going around, he got way more excited. He turns into quite a showman.”

Rebecca Mortensen and her own Seattle Freckles, a 10-year-old Thoroughbred gelding, are currently placed within striking distance on a 28.8, while Jessica Maranto and Czardus, an 11-year-old American Warmblood gelding (Sweet’s Lucky Moondancer x Cadence) secured third place with a 32.8. 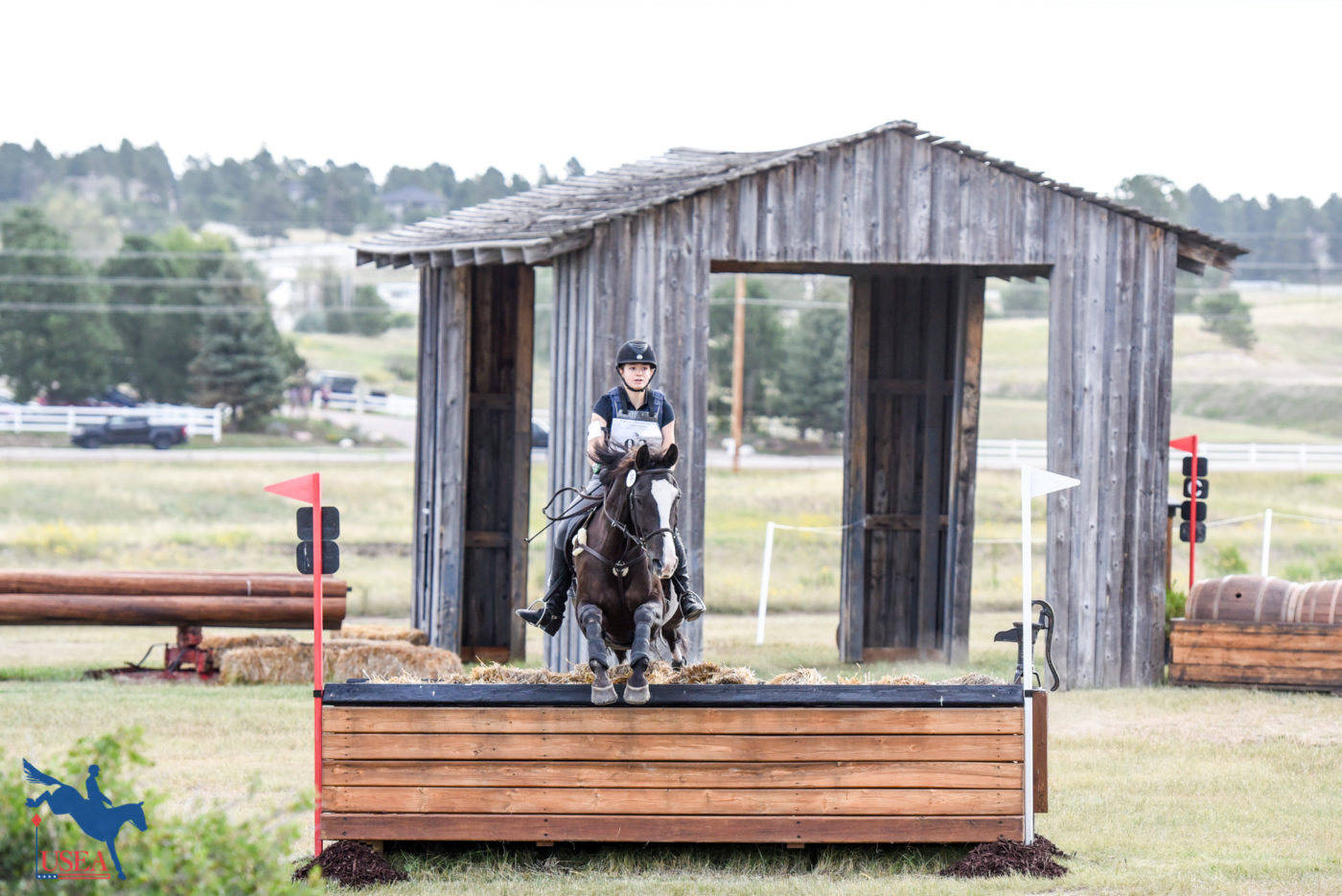 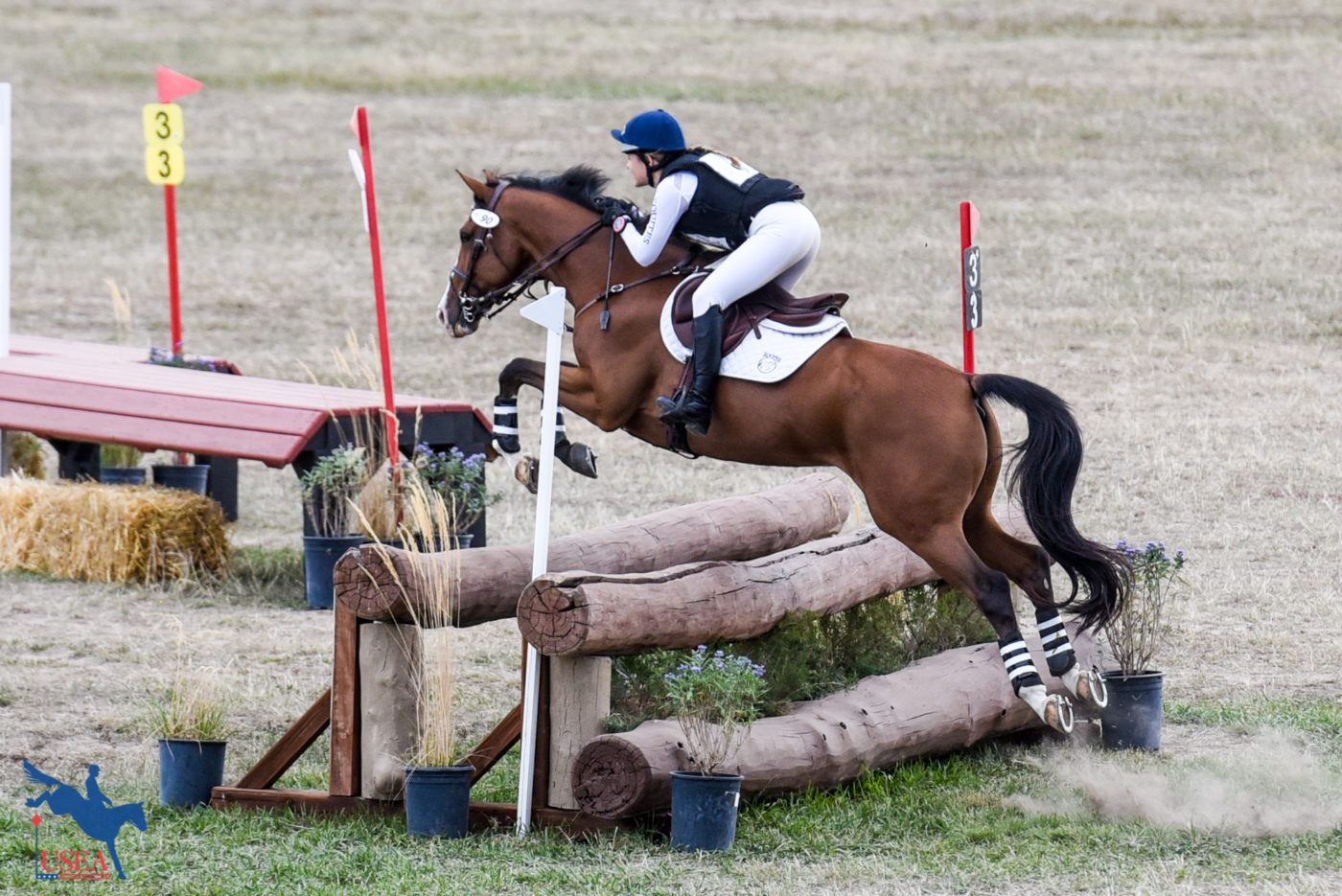 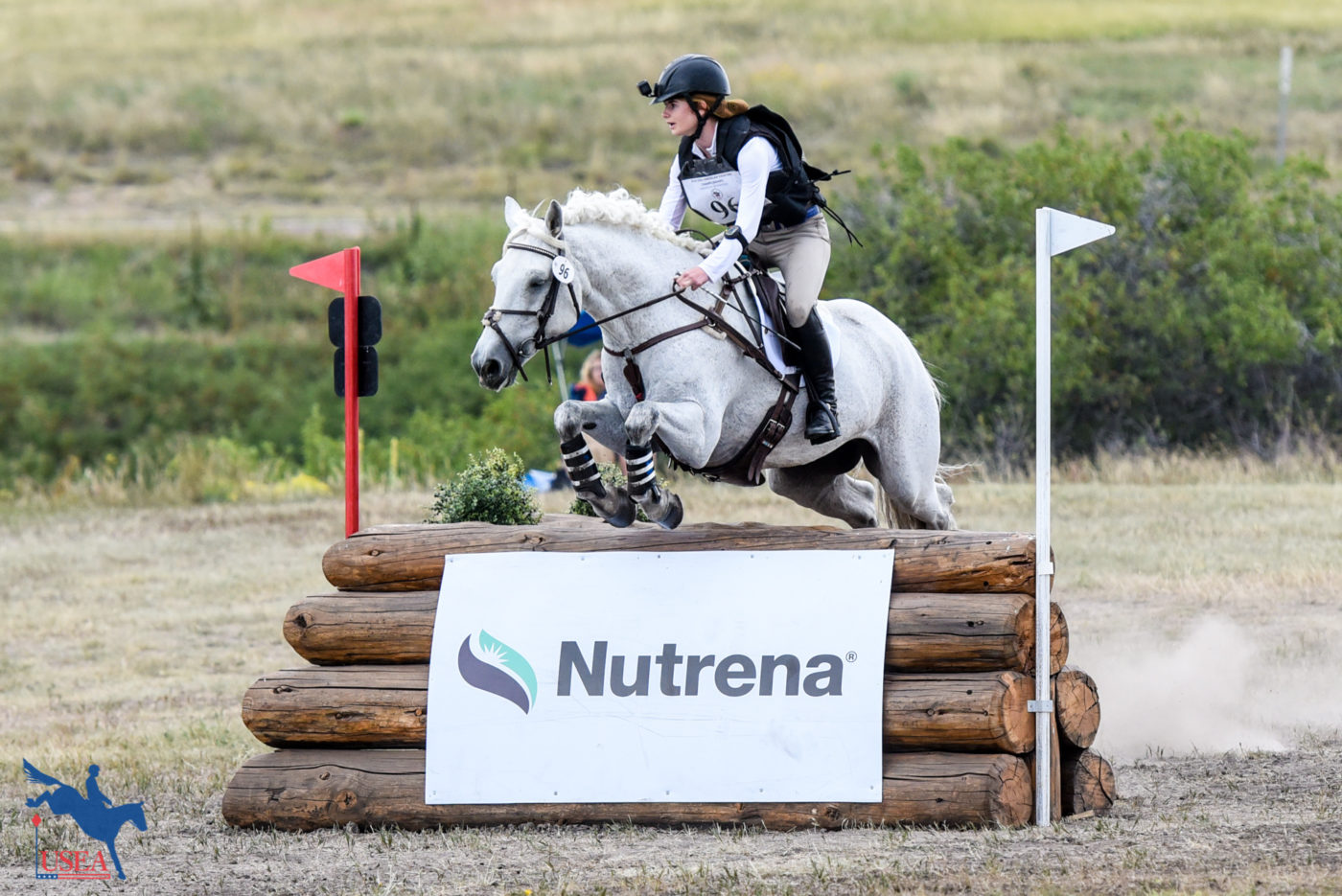 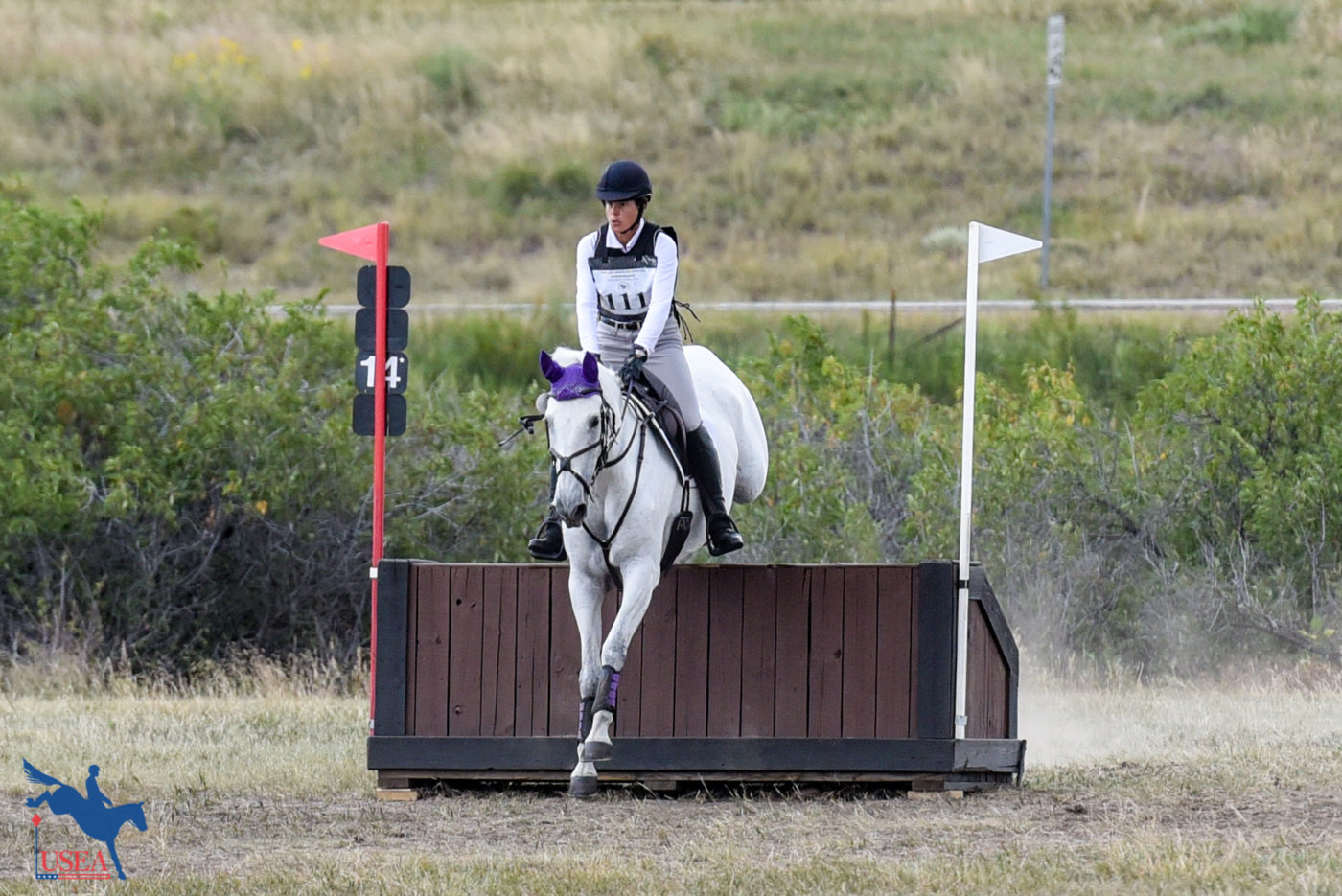 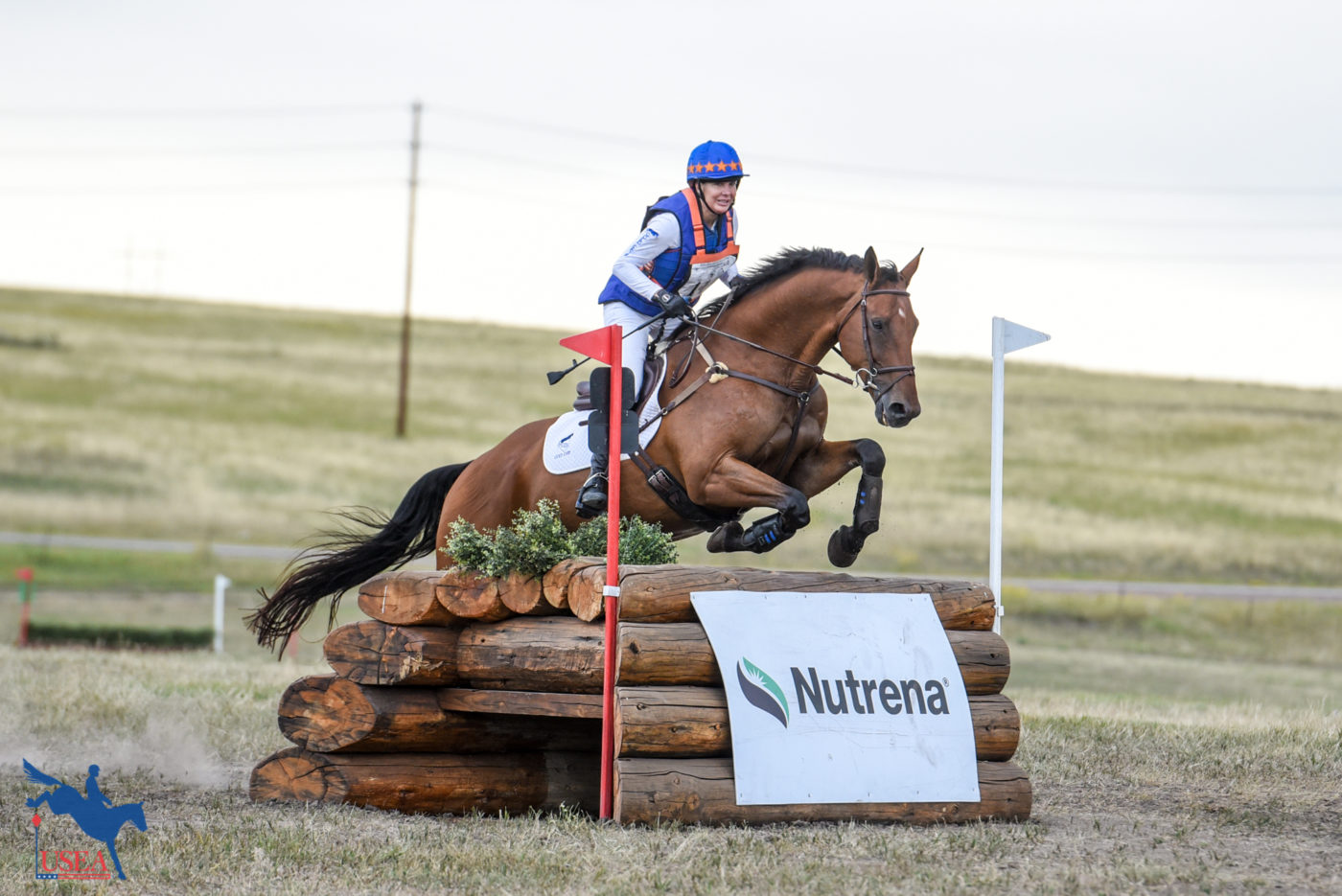 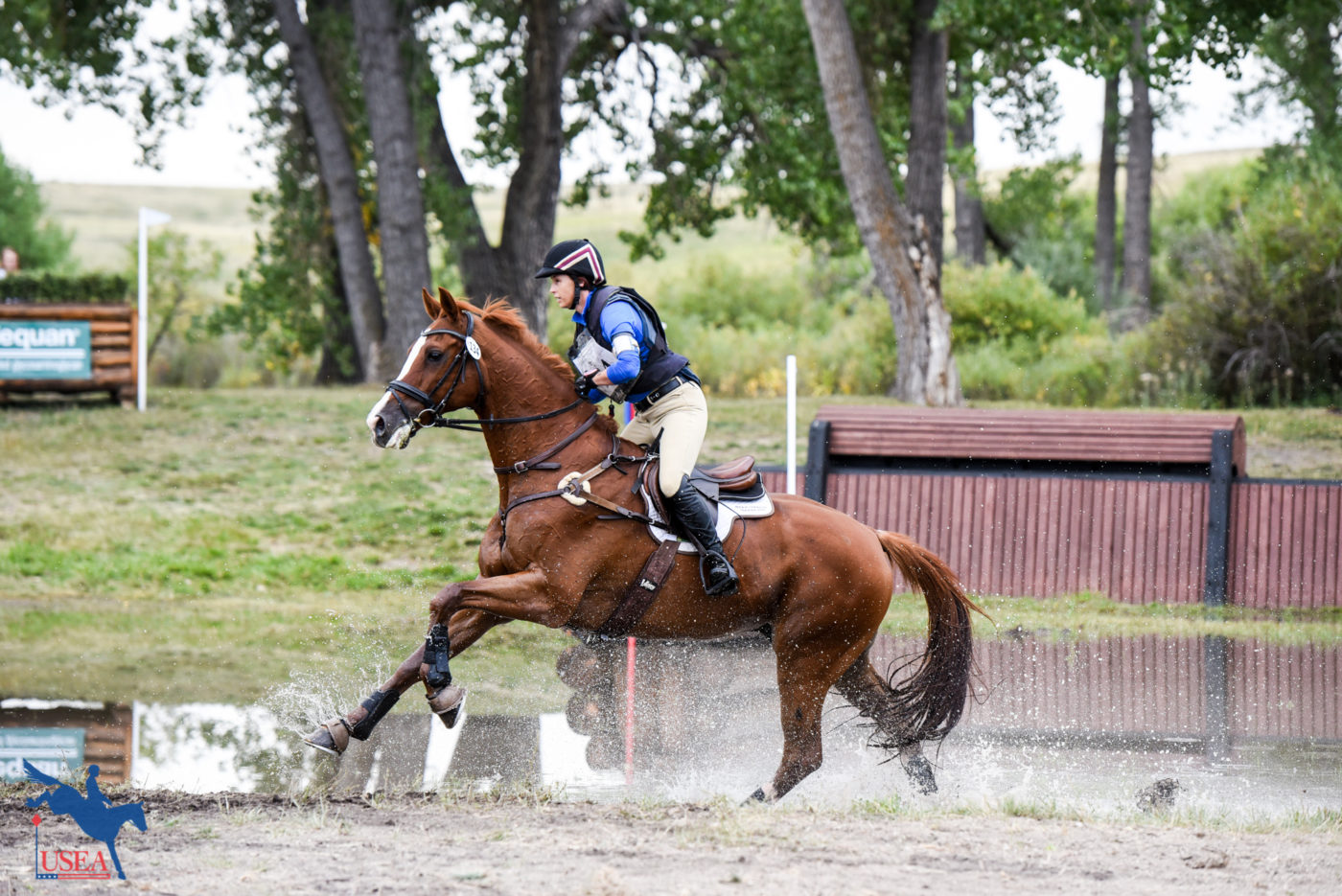 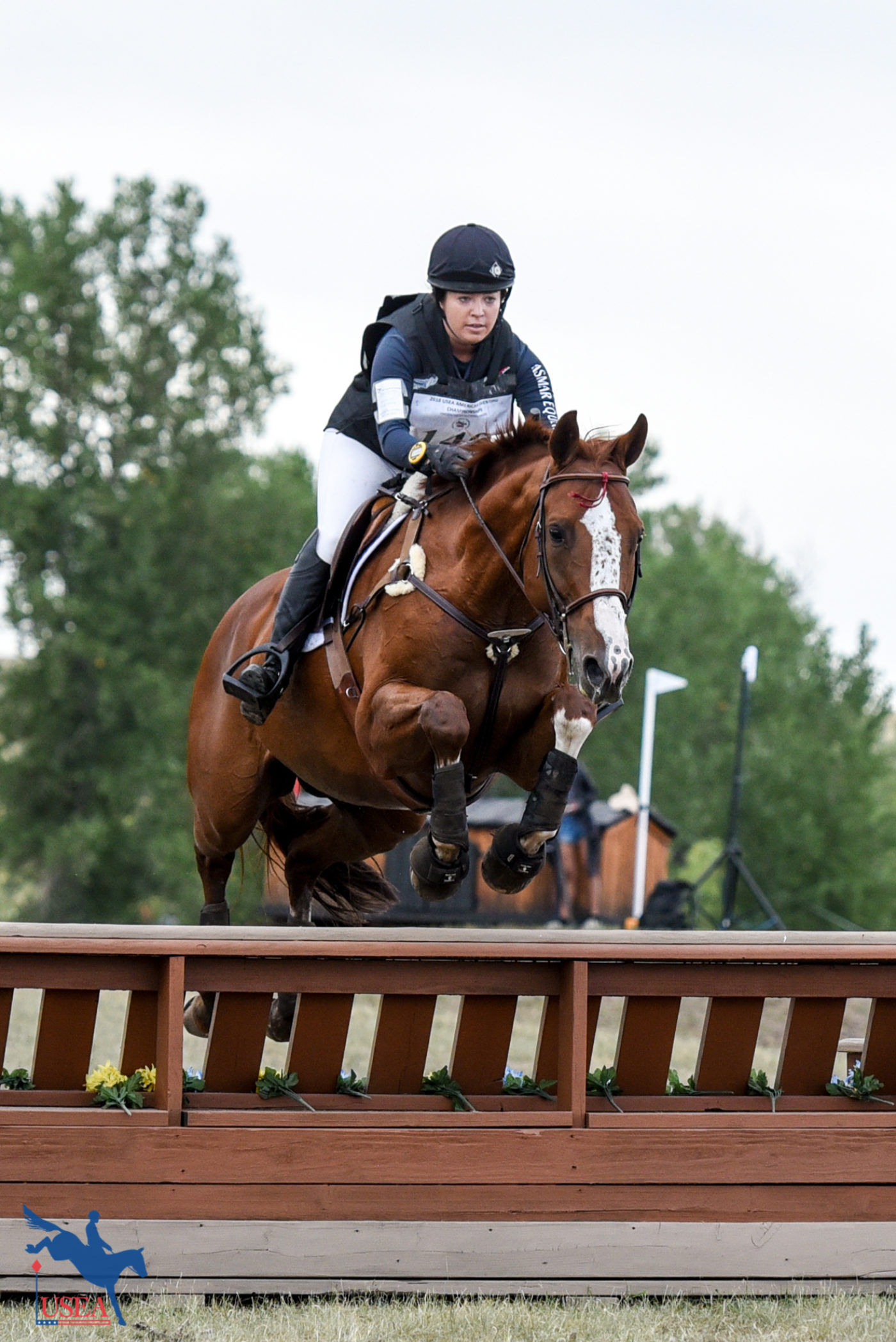 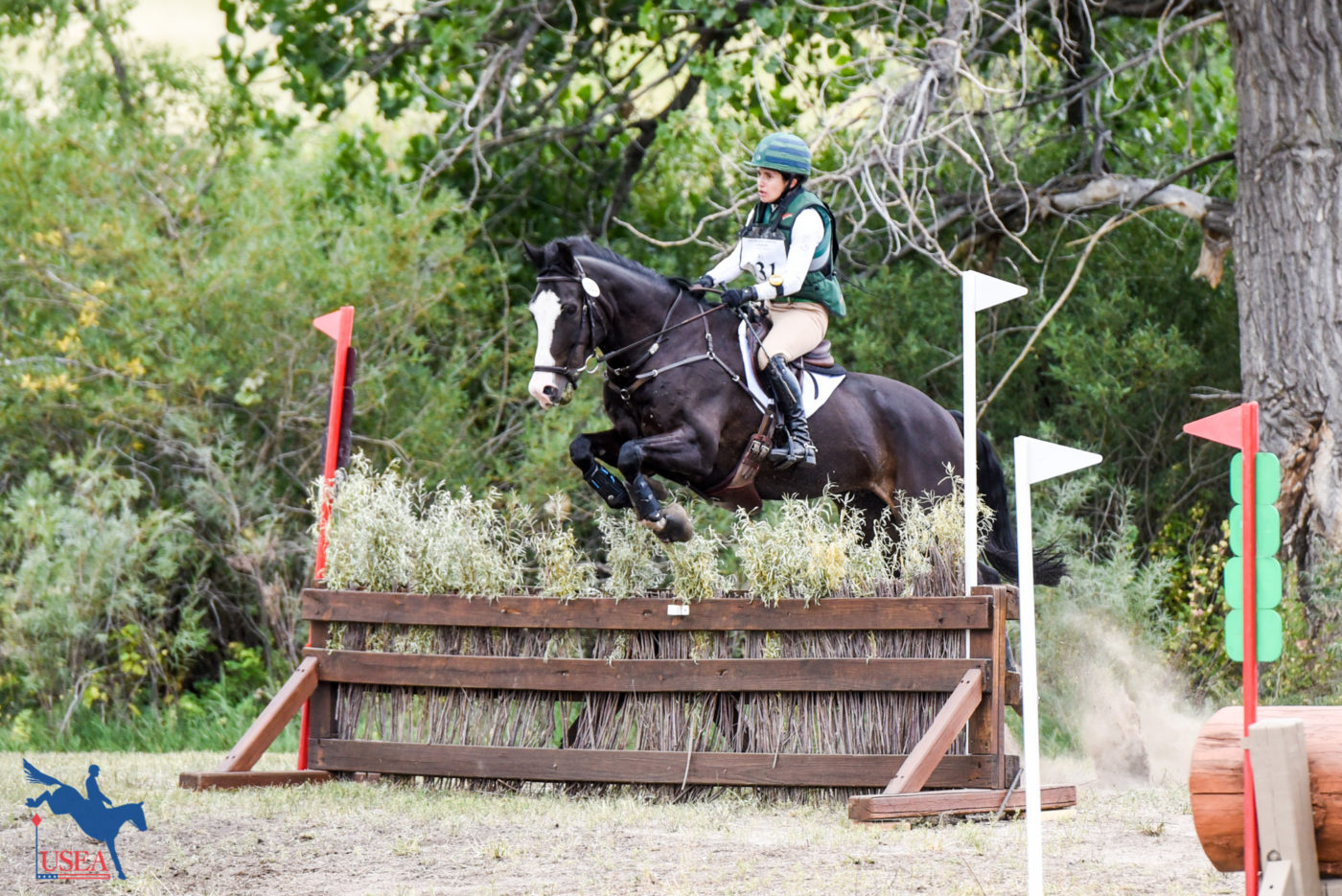 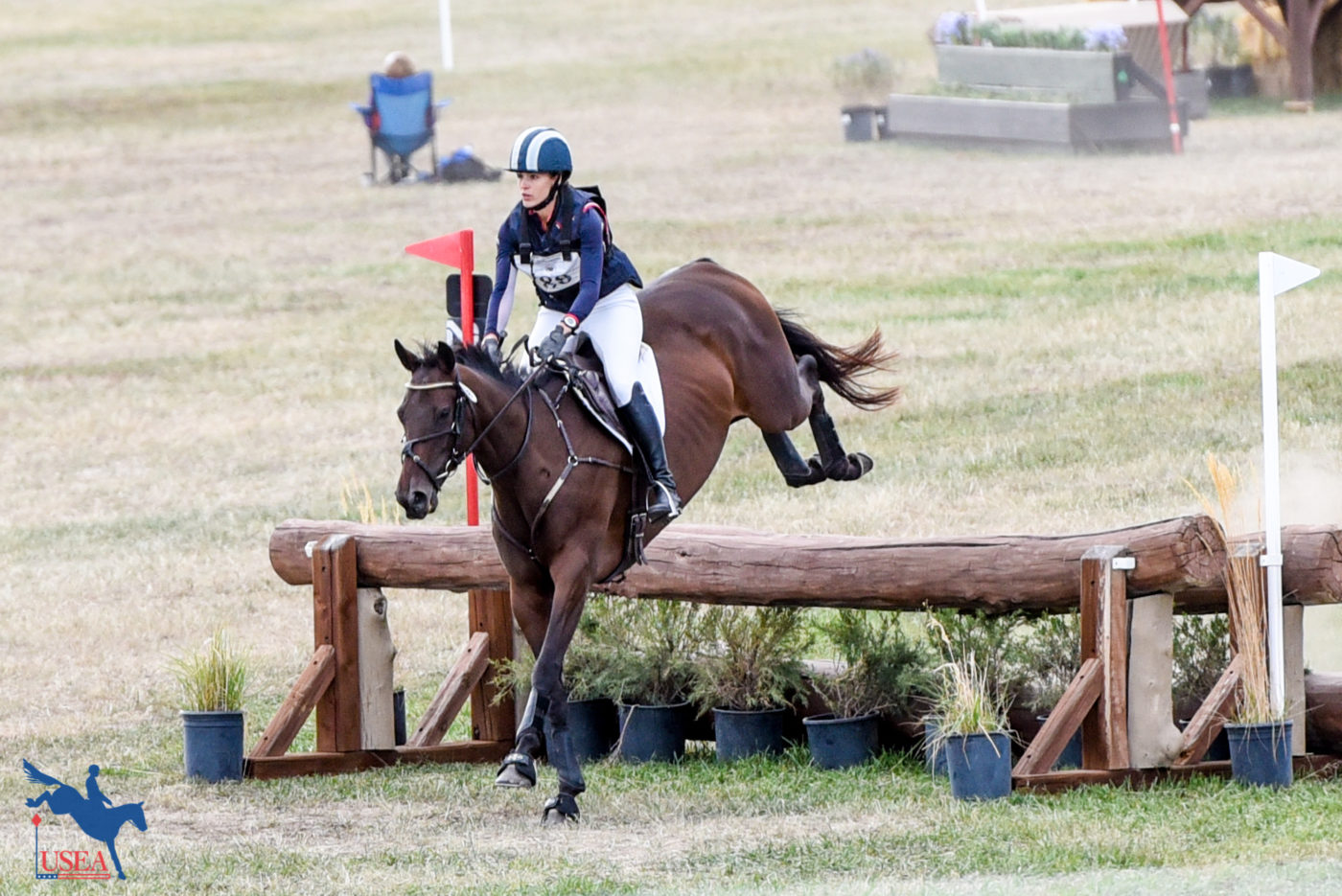 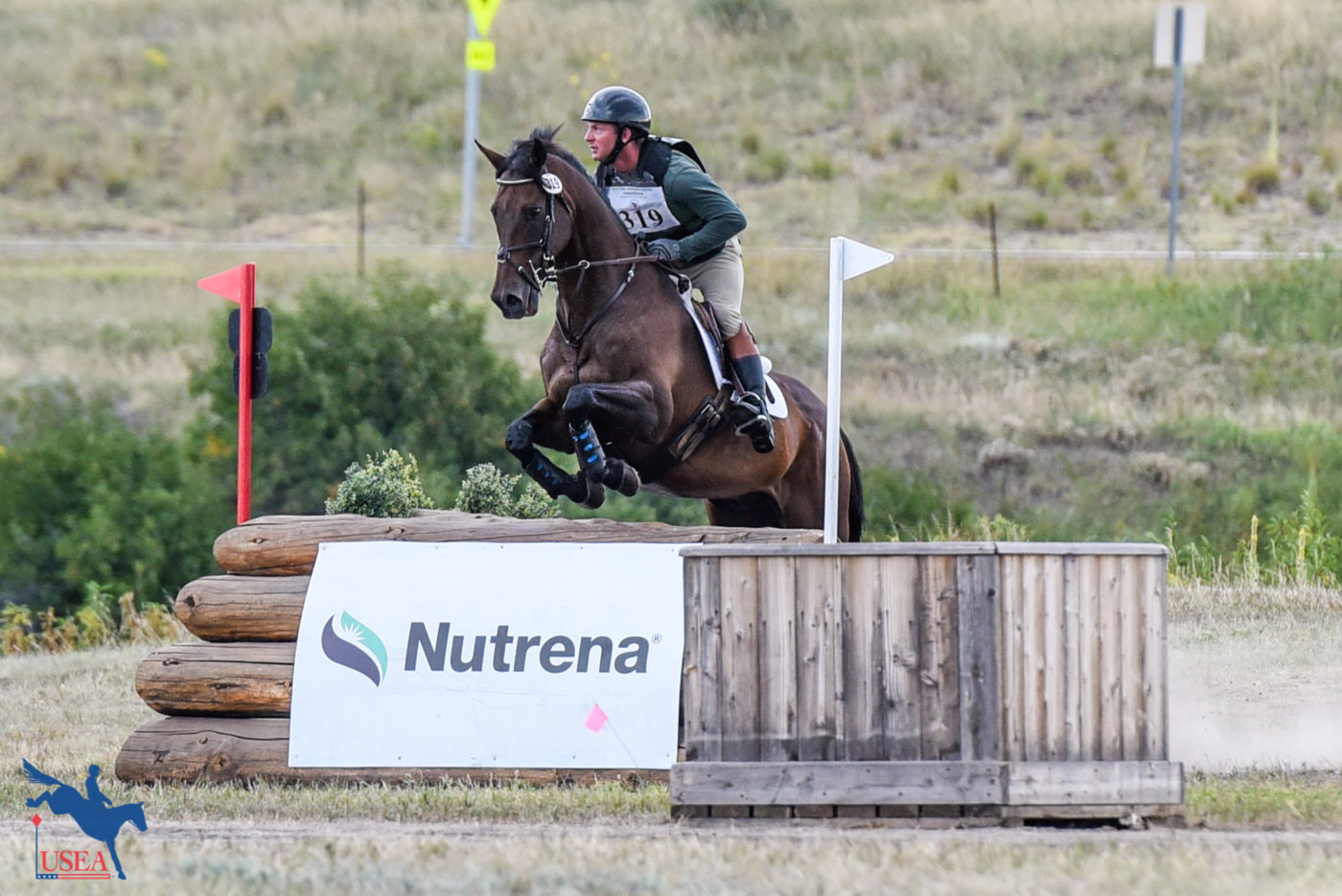 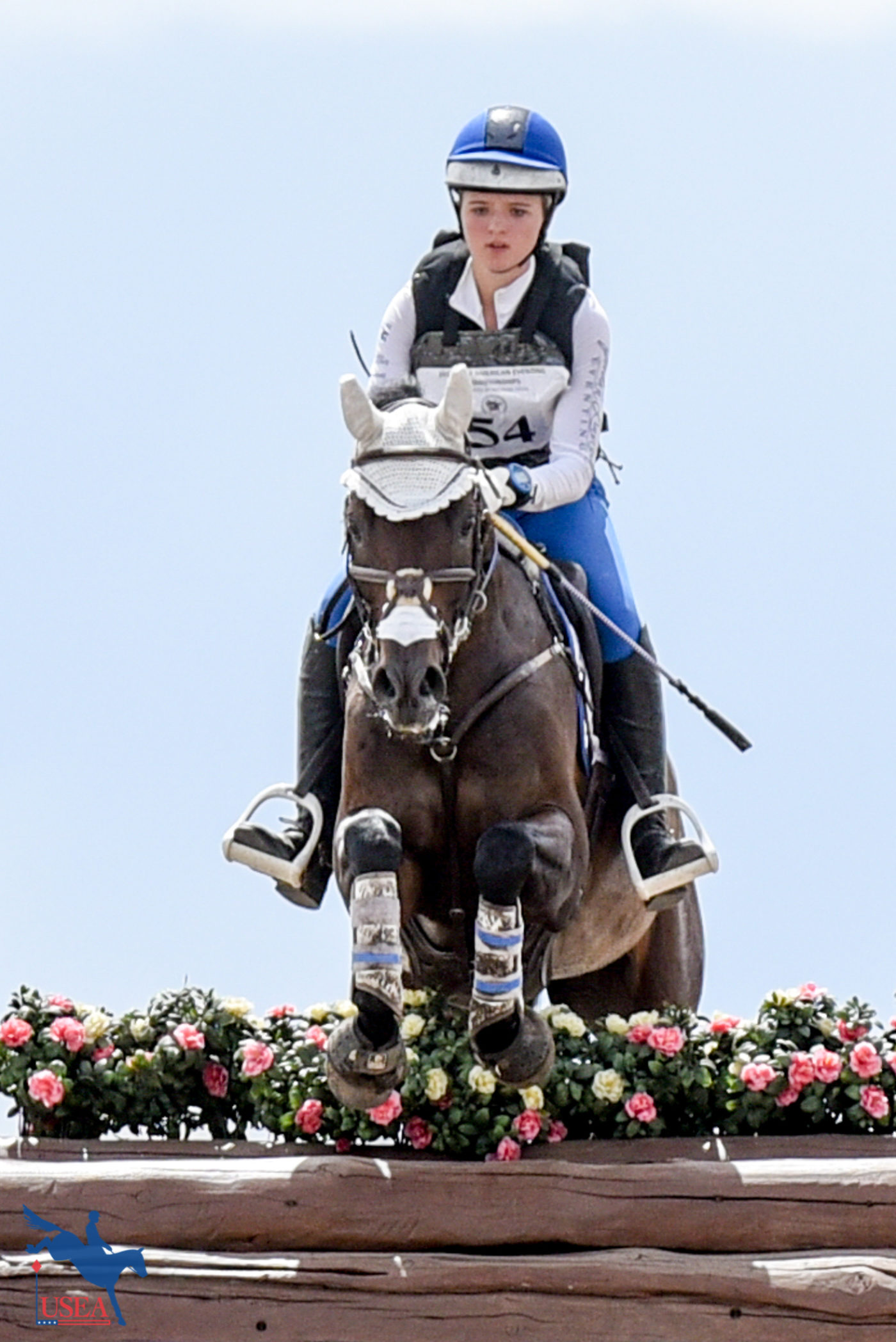 Specifics of the "Fun & Education Formula" were provided to all at the Jim Wofford Clinic held on August 20 & 21 at the Horse Park in Woodside, northern California. Eager riders, auditors, and volunteers gathered for a much anticipated two-day clinic with the master bright and early Saturday morning.

This year a new class will be joining the 47 eventing legends currently in the United States Eventing Association (USEA) Eventing Hall of Fame. Induction into the Hall of Fame is the highest honor awarded within the sport of eventing in the United States. Those invited to join the USEA's Eventing Hall of Fame have truly made a difference in the sport of eventing. Hall of Fame members have included past Association presidents, volunteers, riders, founders, course designers, officials, organizers, horses, horse owners, and coaches.