It was a sweet moment for the eventing community as we were able to come together once again after a one-year gap due to COVID-19 to celebrate the many accomplishments of United States Eventing Association (USEA) members and eventing enthusiasts during the USEA Annual Meeting & Convention Year End Awards Ceremony. The evening’s ceremony was led by Jim Wofford and Jim Wolf and recognized riders, horses, and game-changers in the sport of eventing with over 80 awards and grants.

Wolf next introduced the USEA Leaderboard of Champions presented by Nunn Finer. The leaderboard recognizes many divisions within the levels from Beginner Novice through Advanced. Each winner of the rider categories will receive a beautiful keeper trophy and winners of the horse categories will receive an original champion stall plaque, commissioned by Indian Creek Farm of Spring Branch, Texas. The USEA is always honored to recognize the achievements of these hardworking riders and horses. Click here for the complete leaderboards.

The 2021 Sunsprite Warmbloods Volunteer of the Year is Cynthia Smith (Georgia). Smith is a silver medalist of the USEA Volunteer Incentive Program and has logged a total of 1,045 hours of service in total, with an impressive 536 volunteer hours having been accumulated at USEA recognized events this year. Smith received $1,000, a “2020 Volunteer of the Year'' embroidered jacket, a trophy, and a custom embroidered stadium blanket from Saratoga Horseworks.

The Theodore O’Connor Trophy, $1,000, a SmartPak Pony of the Year fleece blanket, and a custom embroidered Saratoga Horseworks show cooler was awarded to the 2021 SmartPak USEA Pony of the Year, My Valentine, a 17-year-old Welsh mare owned and ridden by Sidnee Milner (Canton, Georgia).

After a remarkable competition year, the 16-year-old Selle Francais mare On Cue (Cabri de Elle x On High) was the recipient of not one, but two top honors during the 2021 Awards Ceremony. Firstly, On Cue was awarded the title of 2021 Standlee Premium Western Forage USEA Horse of the Year. For this recognition, On Cue was presented with the Caser Trophy, $1,000, a $500 Standlee Premium Products certificate, and a custom embroidered Saratoga Horseworks show cooler. On Cue was also the recipient of the Frolicsome Trophy as the 2021 Bates USEA Mare of the Year winner and will receive an additional $1,000, another custom embroidered Saratoga Horseworks show cooler, and a Bates saddle.

One of One Cue’s owners, Christine Turner (San Antonio, Texas), delivered a heartfelt thank you to her husband and silent partners TJ Turner for supporting her passion for horses and making this year possible. Turner also was proud to acknowledge Tommie Turner and Boyd Martin as part-owners of On Cue this evening.

The Essie Perkins Trophy went to the 2021 Bates USEA Lady Rider of the Year, Tamra Smith (Murrieta, California). Smith served as a traveling reserve for the 2020 Tokyo Olympic Olympics team and had over a dozen top-three placings at the Intermediate level and above during the 2021 season. Smith received $1,000, a custom embroidered Saratoga Horseworks show cooler, and a Bates saddle.

This year’s World Equestrian Brands USEA Rider of the Year and recipient of the Windy Acres Farm Trophy was the first rider to break a 13-year-long drought for an American to win a five-star event Boyd Martin (Unionville, Pennsylvania). This is Martin’s fifth time earning this title, and he received $1,000, a pair of Amerigo Safety Stirrups and leathers provided by World Equestrian Brands, and a custom embroidered Saratoga Horseworks show cooler.

Following the presentation of the leaderboard winners, the night turned to awarding of grants. The USET Connaught Grant is designed for a horse competing at the CCI2* or CCI3* level who shows potential to one day be on the U.S. Team and is presented in memory of Bruce Duchossois. This year’s USET Connaught Grant was awarded to Chin Tonic (Chin Champ x Wildera), a 9-year-old Holsteiner gelding owned by Hyperion Stud and ridden by William Coleman.

The Wilton Fair Fund is donated by David and Cheryl Lenaburg with the goal of supporting U.S. developing riders. The Fund allows grants to be given each year for a variety of educational opportunities for riders 29 and under who have not yet ridden for a senior team. This year’s grant recipient is Caroline Martin (Riegisville, Pennsylvania) for a total of $60,000.

The long-standing Worth the Trust Educational Scholarship Program continues to provide financial assistance for young adults and adult amateurs to hone their horsemanship skills training with the country’s top competitors in the sport. This scholarship is generously sponsored by Joan Iversen Goswell, in tribute to her champion horse, “Worth the Trust”. The recipient of the 2022 Adult Amateur Scholarship is Heather Thomas (Lexington, Kentucky).

Wolf had the honors of presenting the five ERAofNA awards this year which included the Above & Beyond Event Personnel Award, the Amateur Impact Award, the As You Like It Owner’s Award, and the Liz Cochran Memorial Grooms Award. Susan Watson (Indian Trail, North Carolina) was the first recipient to be recognized as the winner of the Above & Beyond Event Personnel Award.

The Amateur Impact Award is presented to an Adult Amateur that embodies a dedication to the sport of eventing and shares outstanding sportsmanship. The 2021 recipient of this award is Liz Messaglia from Brownsburg, Indiana.

Presented to outstanding owners who make exceptional influences on the careers of riders and their horses, the As You Like It Owner’s Award was presented to Jacqueline B. Mars (Middleburg, Virginia).

The Courtney C. Reeves Memorial Trophy is awarded to a young individual who exemplifies sportsmanship and the spirit of the sport and who gives back to the sport. This year, that award was presented to Tawnie Anderson (Groveland, Florida) for her dedication to eventing in Area III and her countless volunteer hours and efforts. The full-time working student attends virtual school online and still successfully competes as a C-level Pony Clubber.

Recognizing members 60 years of age and over who are competing at any level in USEA recognized competitions and show great sportsmanship, the Vintage Cup is a unique award. This year’s recipient is Holly Covey of Greenwood, Delaware, who was nominated for her ability to manage a full-time job, care for her multiple horses at home, serve as the Area II Volunteer Coordinator and Young Rider advisor, and provide exceptional care for her husband Brian who is battling cancer.

Similar to the Vintage Cup, the Ironmaster Trophy is awarded to individuals in the sport who exemplify fortitude and courage. This year’s recipient, Mellisa Warden (Williston, South Carolina), wears many hats as wife, mother, groom, technical delegate, and judge. She survived a tragic accident in 2019 which left her leg severely injured, later leading to the difficult decision to pursue amputation. Mellisa never let it hinder her spirit and was back on her horse, judging at events, and cheering everyone on just three months following her operation.

The Sue Hershey Award, in honor of Sue Hershey for her time and dedicated efforts to the development of the USEA Instructor’s Certification Program, recognizes an ICP Instructor who exemplifies the values and commitment of the program as well as inspiring students to achieve their goals. This year’s recipient from Moriarty, New Mexico is Kathleen Russell (Moriarty, New Mexico).

This year's recipient of the Wofford Cup is Jacqueline B, Mars (Middleburg, Virginia). Jim Wofford presents this award to an individual that has made an outstanding contribution to the sport.

Alice Sarno (Phoenix, Arizona) is the recipient of the Andrew H. Popiel Memorial Trophy, which recognizes the role of event organizers and their commitment to the sport. Sarno has been an active part of the equestrian community for over 40 years, is a certified Level III instructor, and assembled a team of committed individuals that work hard to organize the equestrian activities in Area X.

Max Corcoran presented the USEA President's Lifetime Achievement Award to Dougie Hannum. Hannum’s career began as a groom in the 1960’s and later transitioned to the care of horses and opened an equine rehabilitation center. The careers of countless grooms across the country have been impacted by Hannum’s influence. Corcoran closed out her remarks by quoting several individuals who have worked closely with Hannum over the years.

About the USEA Annual Meeting & Convention 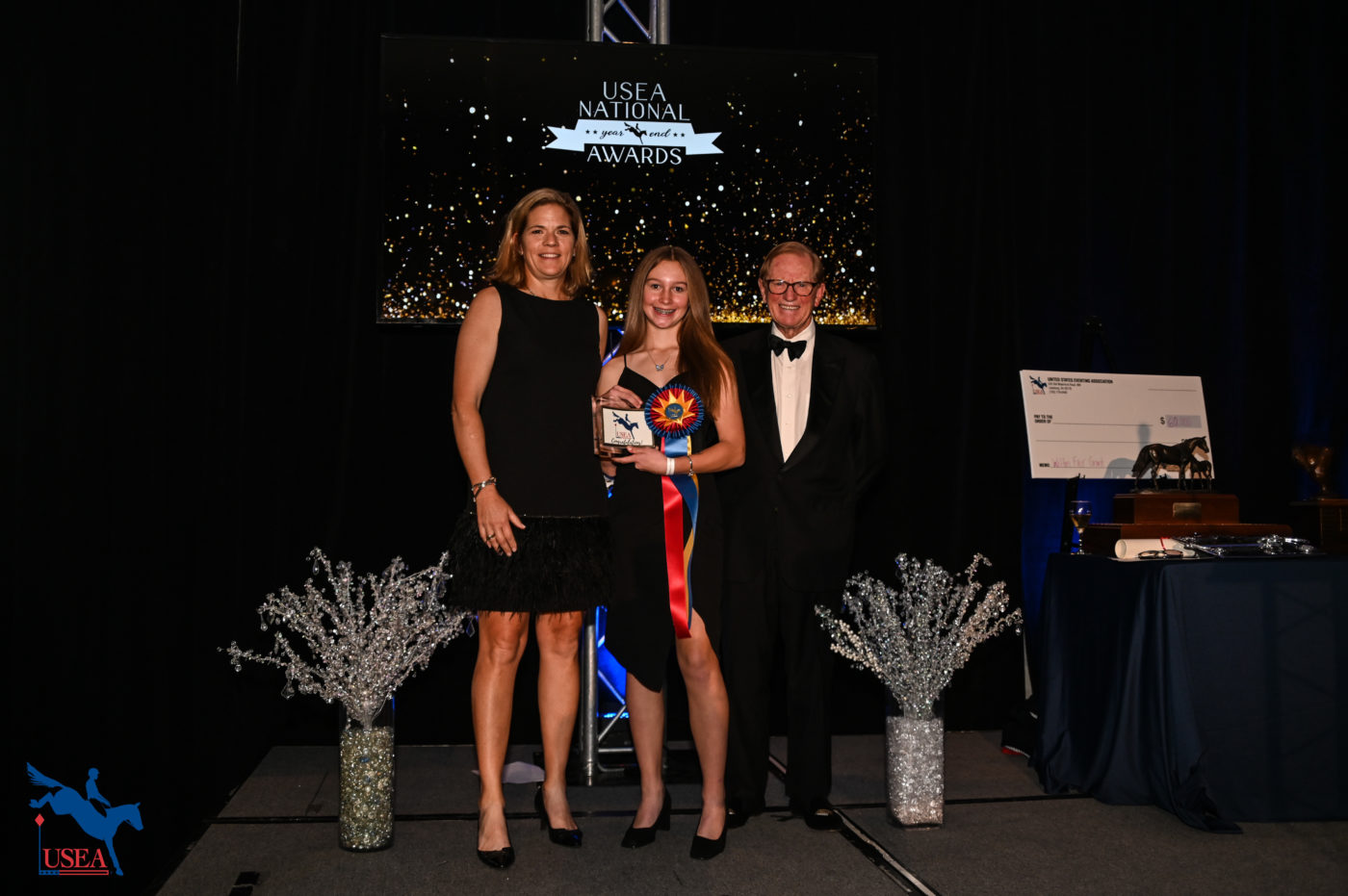 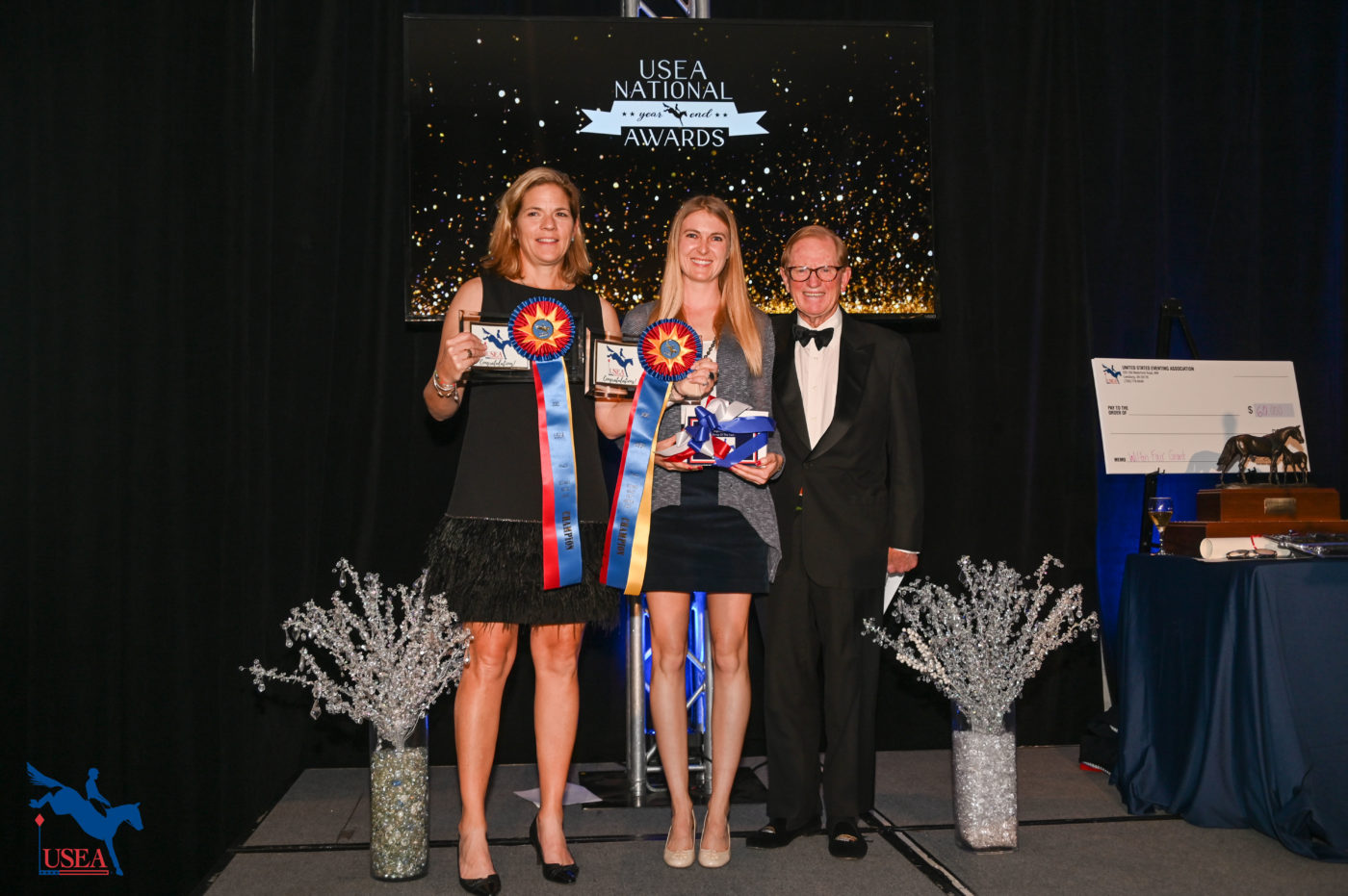 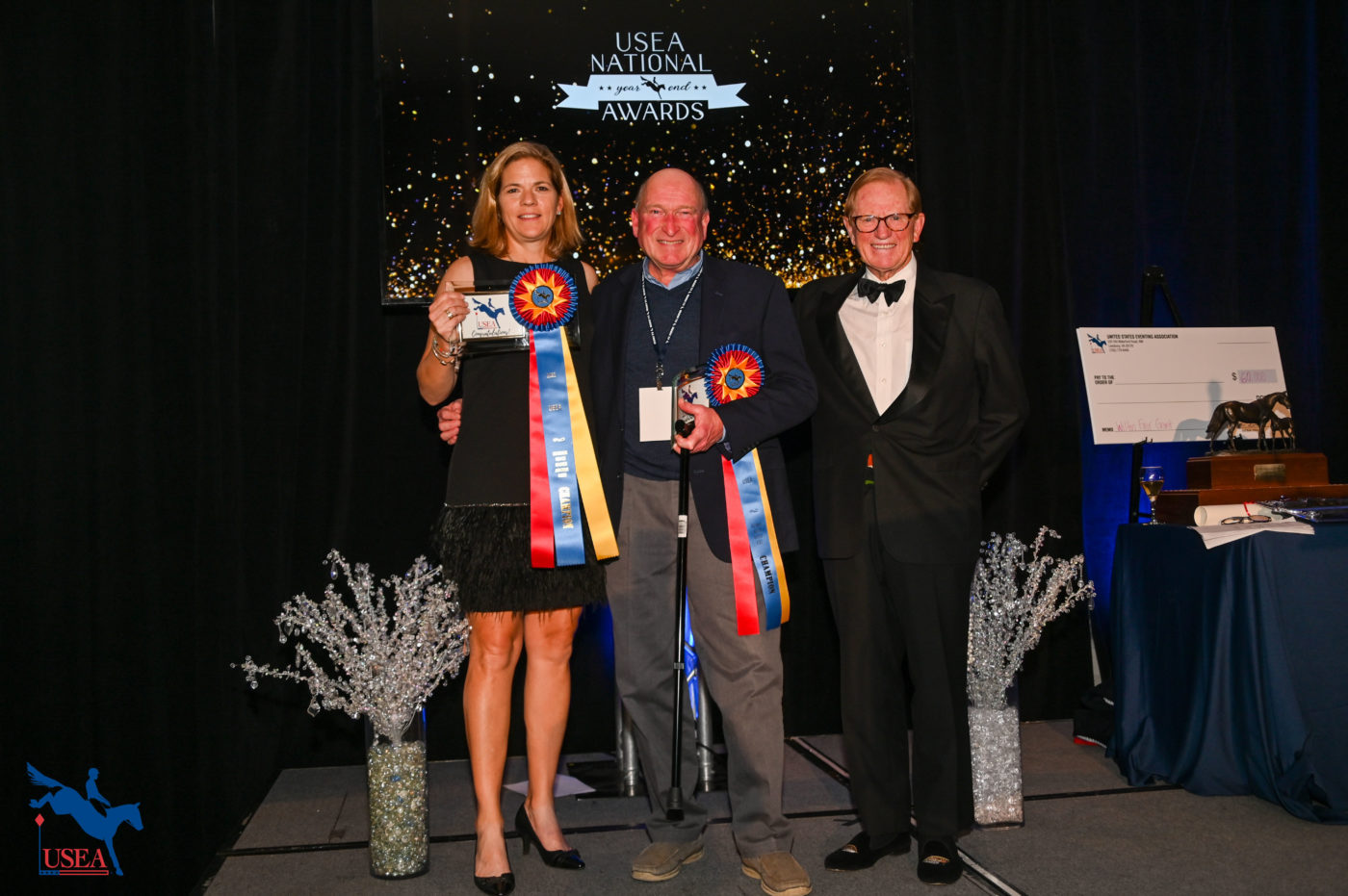 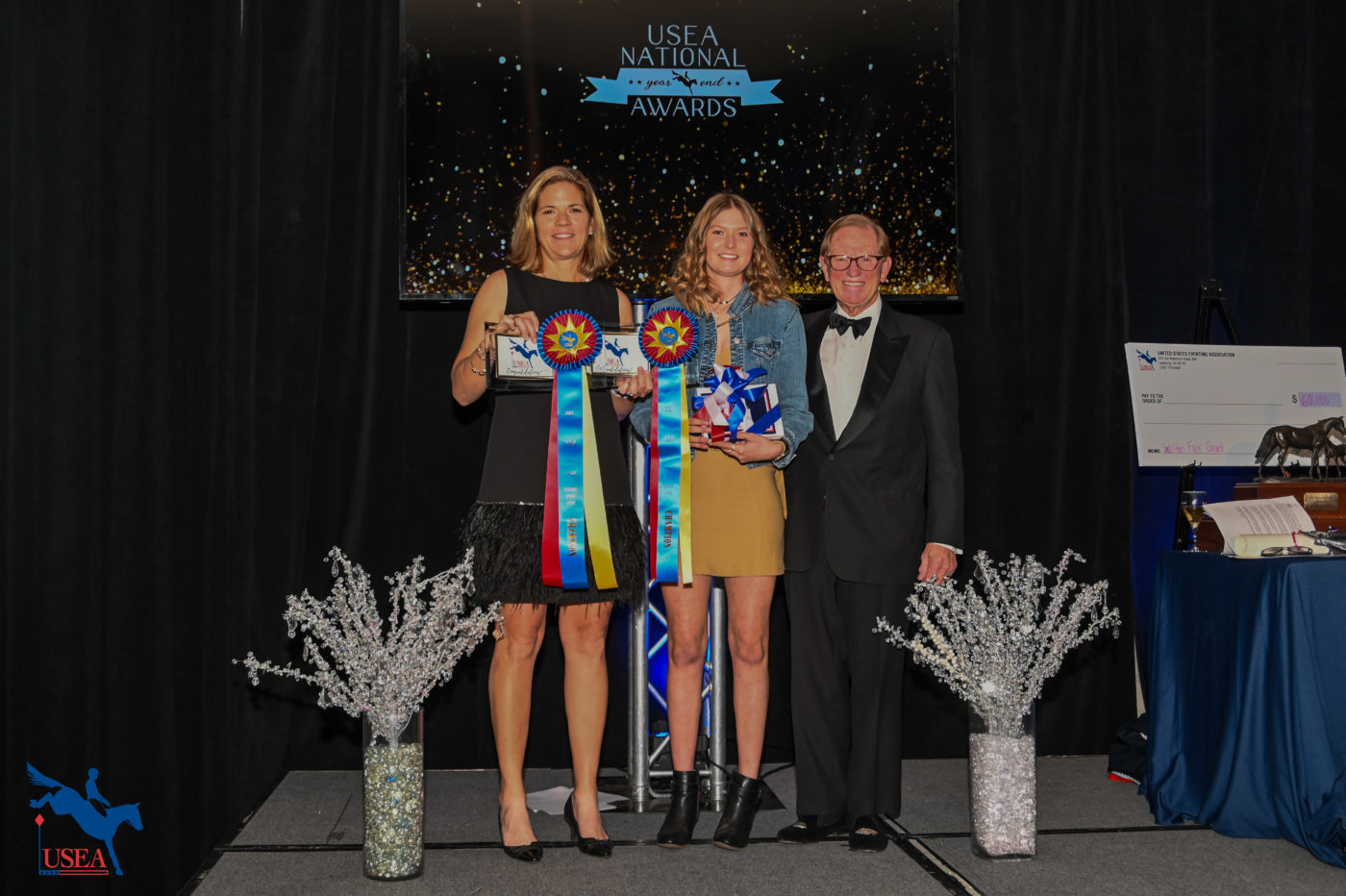 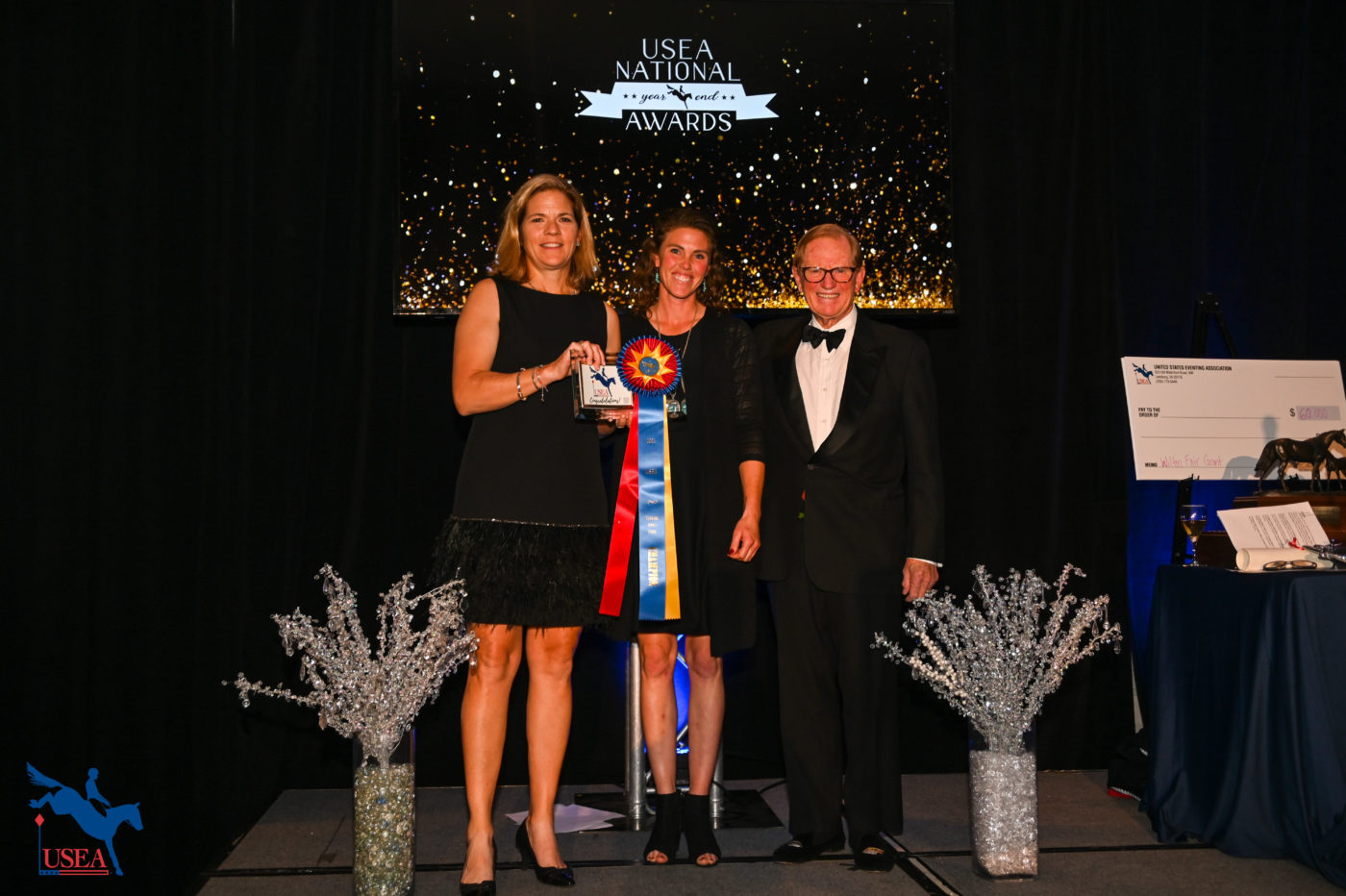 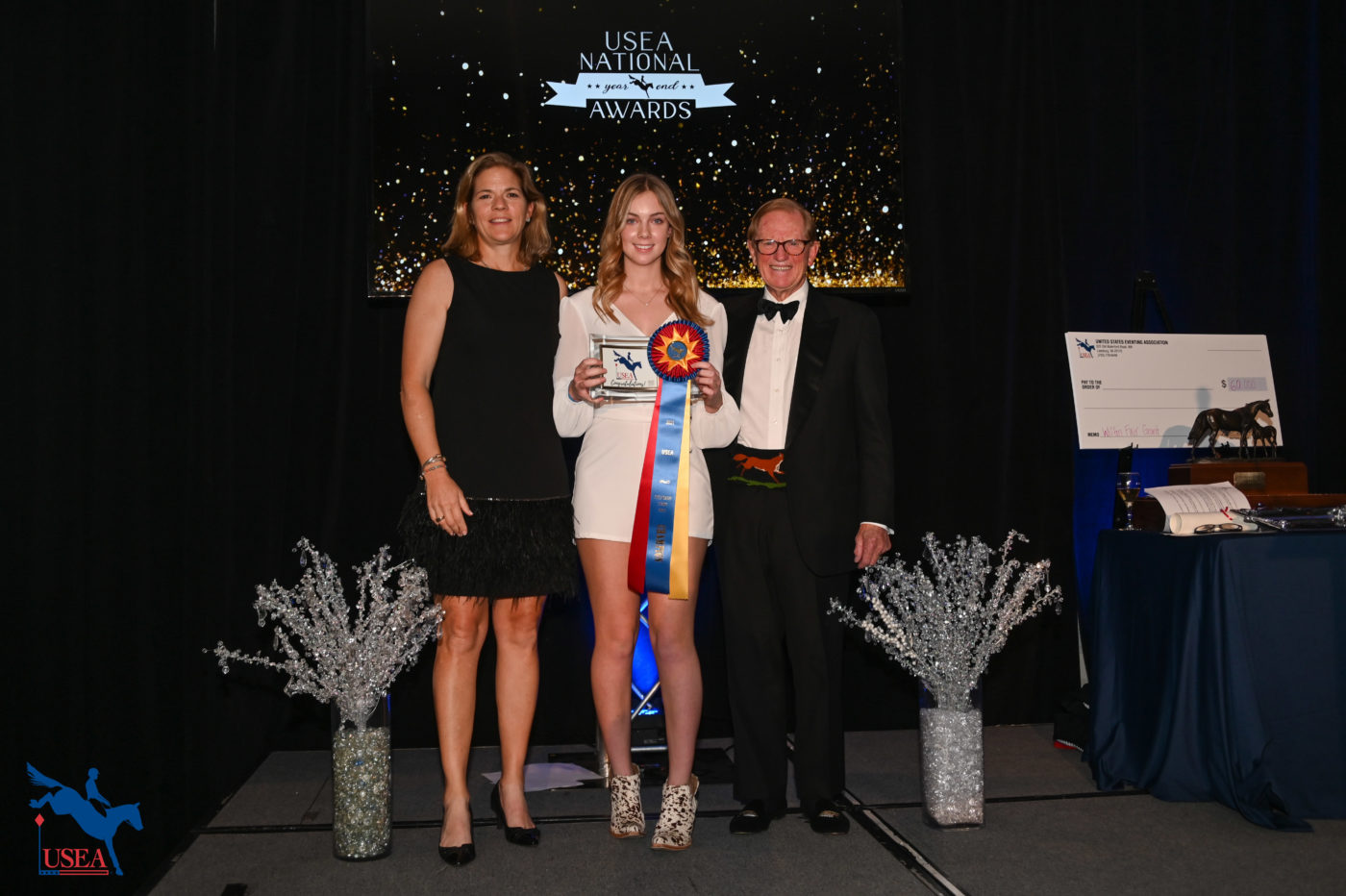 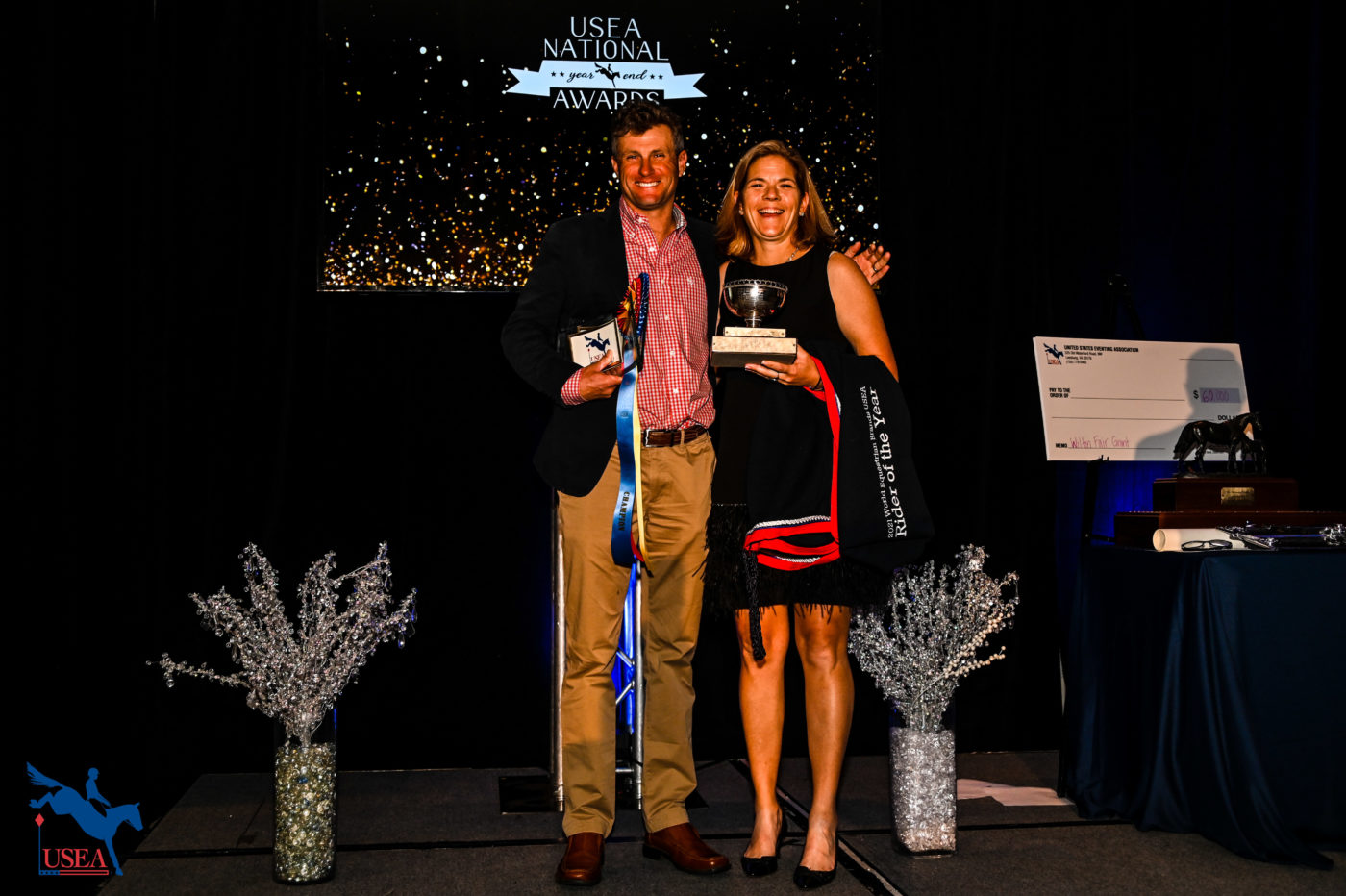 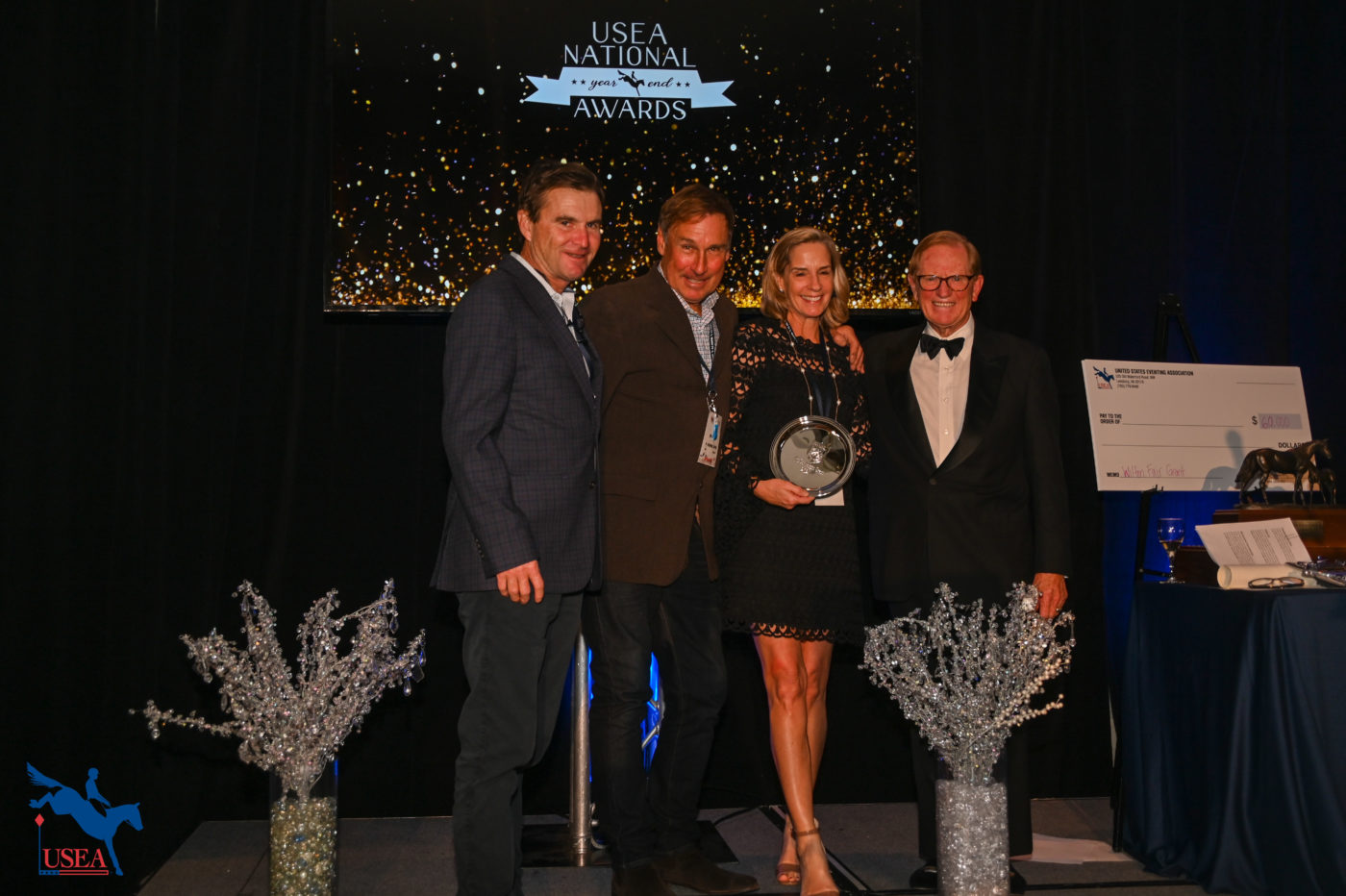 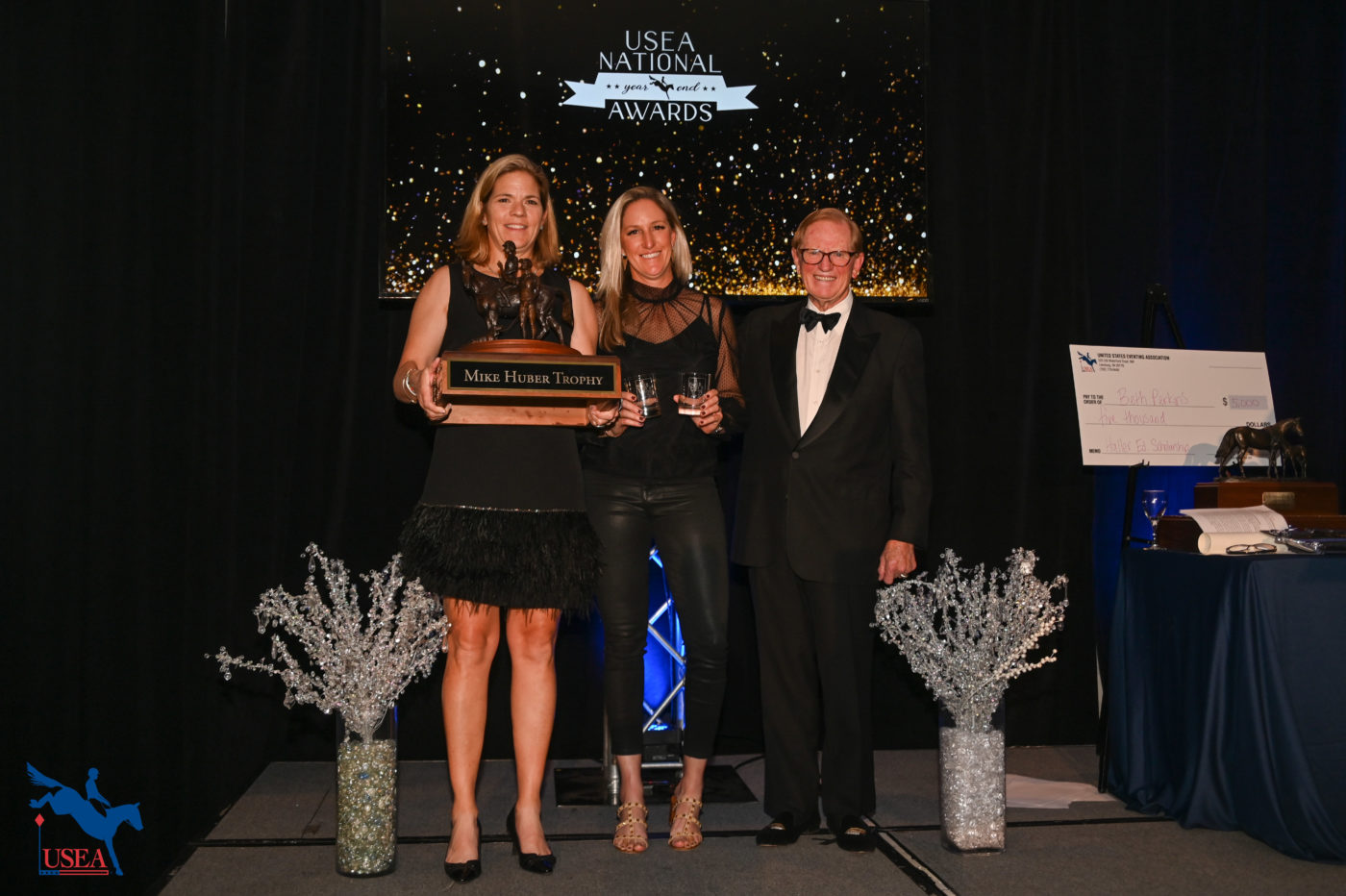 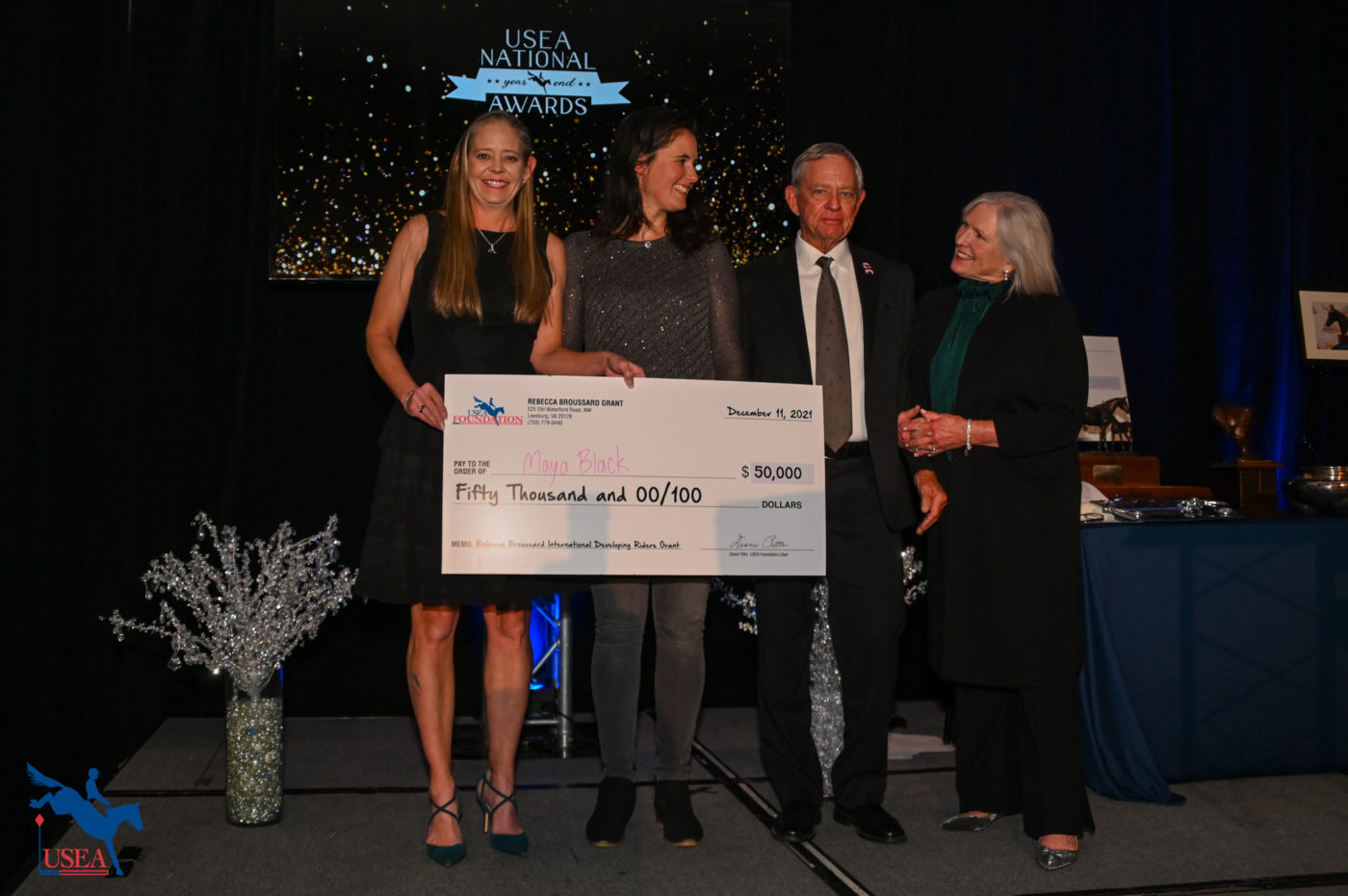 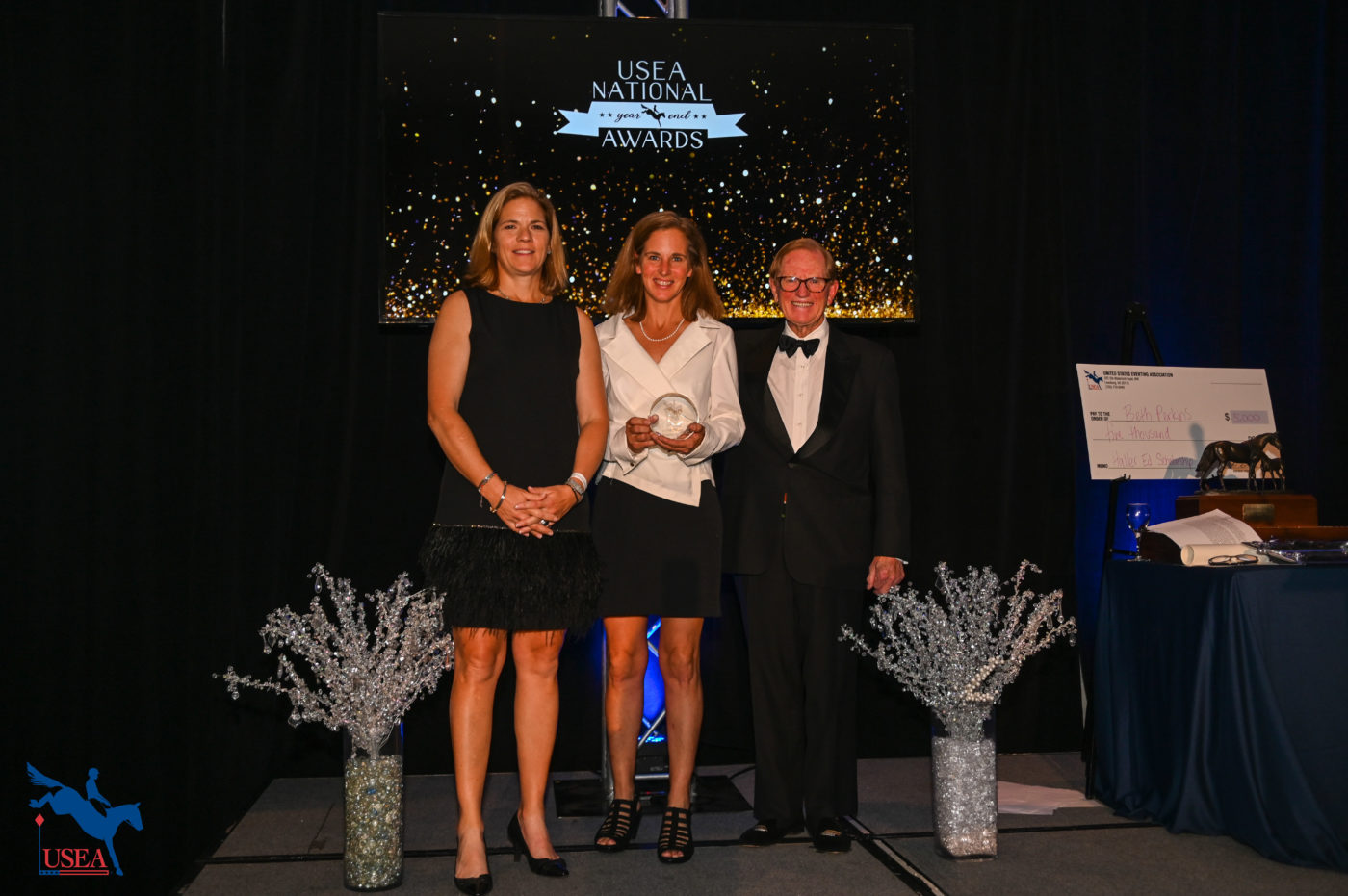 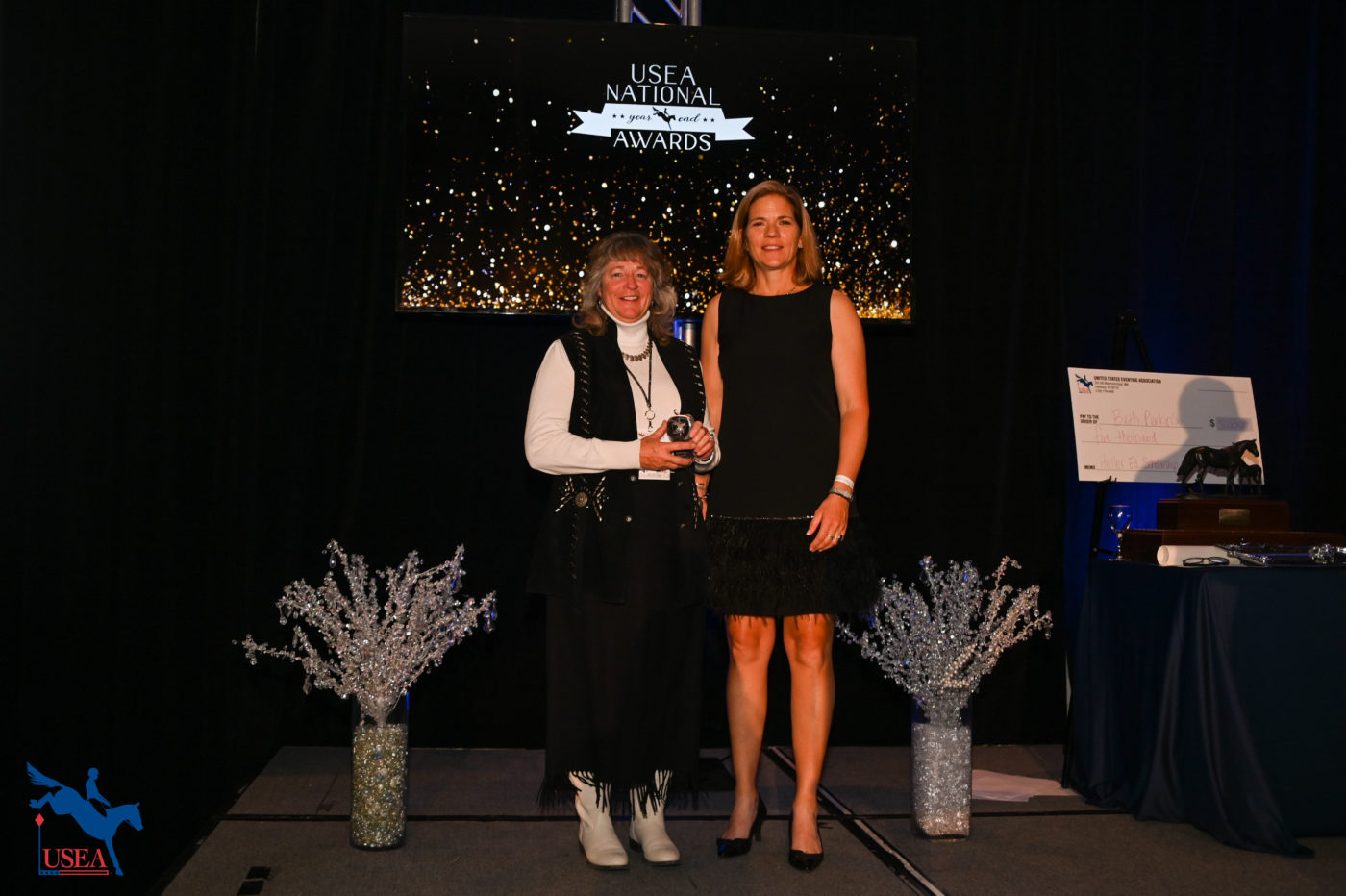 Are you on the hunt for your next farm, ranch or investment property? USEA sponsor, Capital Square, has all of the information that you need to know about the tax advantages for investing in this type of property. Capital Square is an investor-centric firm and leader among tax-advantaged real estate investment sponsors with more than $2 billion in equity raised. Owners of farms, ranches and investment real estate enjoy several tax advantages, include the rules governing Section 1031 that defer taxable gains on the sale of real estate.

Looking Back at the 2022 USEA Classic Series

The USEA is so incredibly proud to allow the thrill of the 'chase to live on for those who want to experience the unforgettable rush of the classic long format three-day event through our USEA Classic Series events. Long-format events from the Beginner Novice to Preliminary levels are still a reality with the USEA Classic Series and include roads and tracks, steeplechase, and cross-country on "endurance day," as well as horse inspections. In addition, educational activities are offered at the USEA Classic Series Events to help prepare competitors, especially those who are contesting their first-ever long format event.

The 2022 United States Eventing Association (USEA) Annual Meeting & Convention in Savannah, Georgia is a time to celebrate the incredible achievements and memories made by our members throughout the year. During the convention, the USEA will shine a spotlight on the national awards winners, grant recipients and eventing legends during three separate events: the USEA Year End Awards Luncheon, the USEA Annual Meeting of Members Luncheon and the 8th edition of the USEA’s Eventing Hall of Fame Gala. With so many celebrations taking place in one packed weekend, it may be hard to decide which you want to attend. Keep reading for all you need to know to on these three uniquely special events!

The United States Eventing Association, Inc. (USEA) is pleased to announce the return of an official USEA Educational Collaborator, Ride iQ. Ride iQ is a mobile app that allows riders to take audio lessons with top coaches while they ride, an opportunity that hasn’t existed before. In 2023, the USEA will partner with the company to offer exclusive content in collaboration with the USEA’s Eventing Coaches Program (ECP) and the EA21 program, as well as creating other unique educational opportunities.