After a stellar day of cross-country performances at the FEI World Championships at Pratoni del Vivaro, Italy, Team USA has leapt into silver medal position and is only 1.3 penalties behind the Germans who go into the final phase of the Championship in gold medal position.

“He’s such a good jumper. The striding kept getting shorter and shorter and I had to wrangle him in a couple of times, but he was right there and was just on it and super. I’m really pleased,” said Smith. “He is 16, but he’s feeling better and stronger each year. I have an unbelievable, magical unicorn in all three phases - he’s a horse of a lifetime and he’s made a lot of dreams come true. He felt great until the end, I will take care of him tonight, and I know his heart is as big as mine and he’ll give me everything he has tomorrow.

“The course rode the way we had planned, and the Slide rode much better than I thought - I had never done anything like that, and it had my heart racing a little bit this morning. What a great thing it is for the Americans to have Ian [Stark, Team USA’s cross-country coach] - he’s a legend. We have confidence, he showed us to ride fast - I thought I was one second over the time but luckily I was one second under!”

Martin was on the same score as Tim Price and the 13-year-old Hanoverian gelding Falco (Cardenio 2 x Witta), who Price co-owns with Sue Benson, when setting out but, with Price one second faster than Martin, and therefore further away from the optimum time, Martin nipped one place ahead of the New Zealander.

Martin said: “I might say I just timed it perfectly, but I was just going as fast as my horse goes - when I heard it announced that I was right on the time I felt a big breath of relief. How you have to ride this track doesn’t suit him. He suits the big five stars that have long gallops and I can get him settled in. Here it was a bit like Tokyo, where it’s turning and stopping and starting, and the sunlight was a bit weird by the end of the day, but I have to give this horse credit - he just tries and tries and tries. He’s a legend.

“When he first came to my barn I hardly rode him - I gave him to the kids to ride because I just thought he was a fluffy little pony, and it goes to show how much I know because you can pick all these fancy, shiny, big-jumping, big-moving expensive horses and this is the guy that just keeps turning up.”

The third counting score for the Americans was that of Will Coleman and the Off the Record Syndicate's 13-year-old Irish Sport Horse gelding Off The Record (VDL Arkansas x Drumogoland Bay), who was just two seconds over the time when first to go for the team and therefore added 0.8 of a time-fault to their dressage of 26.4. They are in 11th place.

Coleman said: “He was really good - I thought he answered all the questions very confidently. He’s a little bit of a bulldog out there - he takes the bit and really wants to go, but I was pleased with just how almost arrogant he was out there. He was telling me to let him at it - it was cool. He’s not the fastest horse; he’s very efficient, and he’s quick, but he doesn’t necessarily have the most tremendous gallop and he loses a bit of step as he tires. He was really fit, and I am super happy with how he ran - he did his absolute best.”

A delighted Grald said: “We killed it! This is my horse’s best phase, and he was just great. He started off a little keen, and I wanted to go quick, and I knew I shouldn’t tug. He rattled a couple of fences because he was just jumping at them as he has been used to me protecting him a little bit. I just had to trust in his carefulness. And then, by the time he did the Slide [fence 7abc, a log drop to two skinnies on the side of a steep hill], I was like, ‘We're good, rock on.’

“Yes, we’ve got one more phase to go, but he's good at showjumping too, so I'm actually looking forward to it. This is my first horse at the Advanced level and four- and five-star. He's gone overseas multiple times, and honestly being here isn't any more pressure than I've ever put on myself before. Obviously, there's the extra support of the US team and all that, but I always come to be competitive.

“I do think being here in the World Championships was an incentive for me to take a risk - because I'm gaining mileage, I go to these big events and tell myself, ‘Jump clear first, then try to be as fast as you can, so I end up being conservative [at the beginning of the course] and then kind of hammering him home at the end. Today, I was like, ‘What are we here for? My dressage isn't the strongest but I’m gonna finish on it.' So that’s the plan.”

Grald’s score is 32.5, and Lauren Nicholson is only one place behind her in 18th on 32.7 with Jacqueline Mars’ 15-year-old Anglo-Arab gelding Vermiculus (Sazeram x Wake Me Gently). They picked up 5.6 cross-country time penalties.

She said: “He was super. We’ve done eight five-stars; we know each other really well. I know I can trust him if we’re in trouble and I knew all the questions were there for him - it was more, for me, trying to hammer the time from the get-go because he doesn’t have a huge gallop. I’m glad to have it done - it’s always a different kind of pressure riding for the team, and you are toeing the line between being gutsy and trying not to do anything stupid that might affect the team.”

The scores are tight going into the final showjumping phase tomorrow. The British team have slipped from first to third after Laura Collett and the 13-year-old Holsteiner gelding London 52 (Landos x Vernante) who Collett co-owns with Keith Scott and Karen Bartlett, ran out at fence 7c and Tom McEwen and Toledo de Kerser (Diamant de Semilly x Ariane Du Prieure Ii), a 15-year-old Selle Francais gelding owned by Fred and Penny Barker, Jane Innis, and Ali McEwen, collected 4.8 time-faults, but they are still only 3.5 marks behind Team USA. Michael Jung has a fence in hand over Yasmin Ingham to win his second World Championship title - to add to his two Olympic individual golds and three European Championship wins - but Ingham has less than one penalty over Tamie Smith and Mai Baum. The USA has a great chance of winning a first team medal at a World or Olympic Championship since 2004. 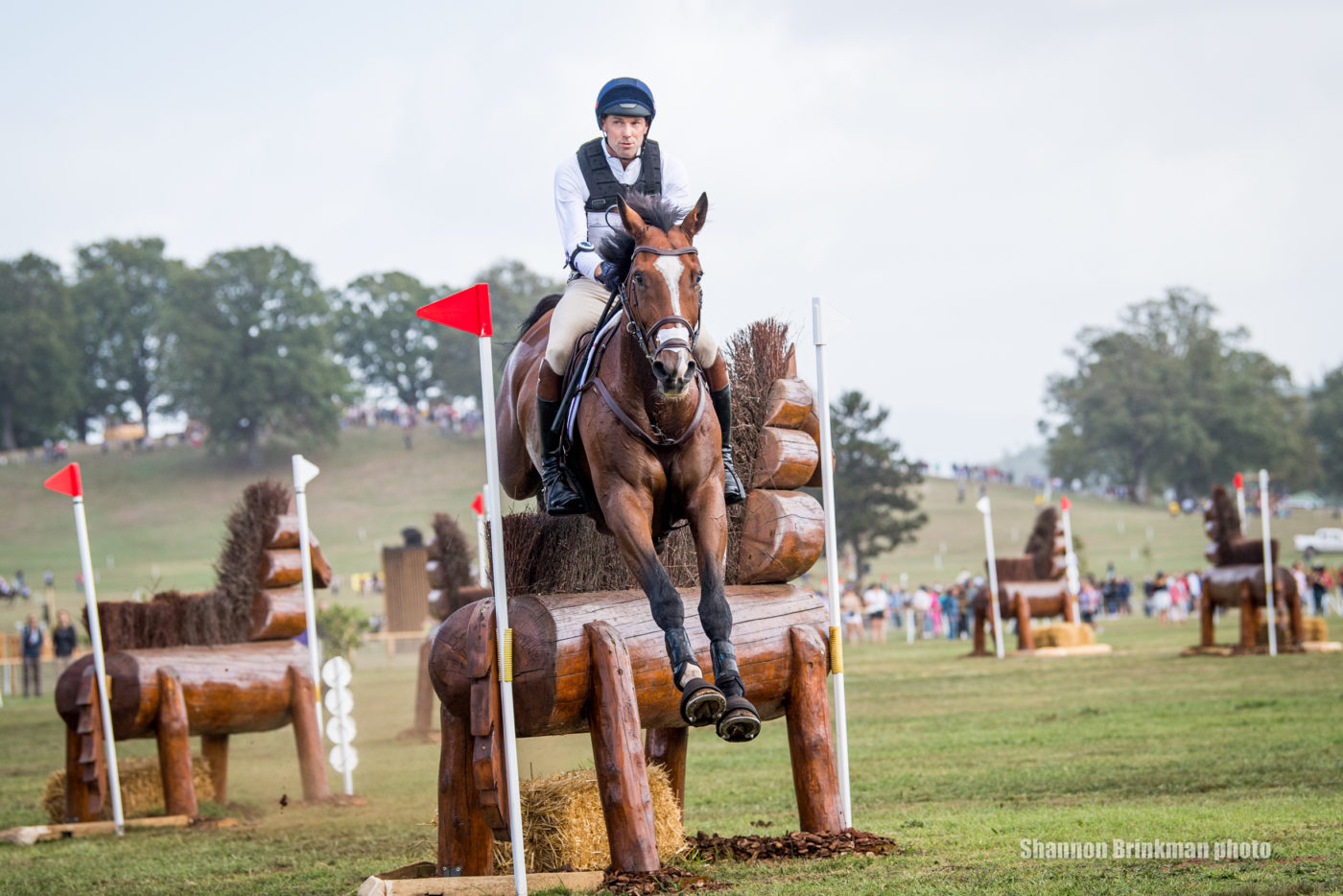 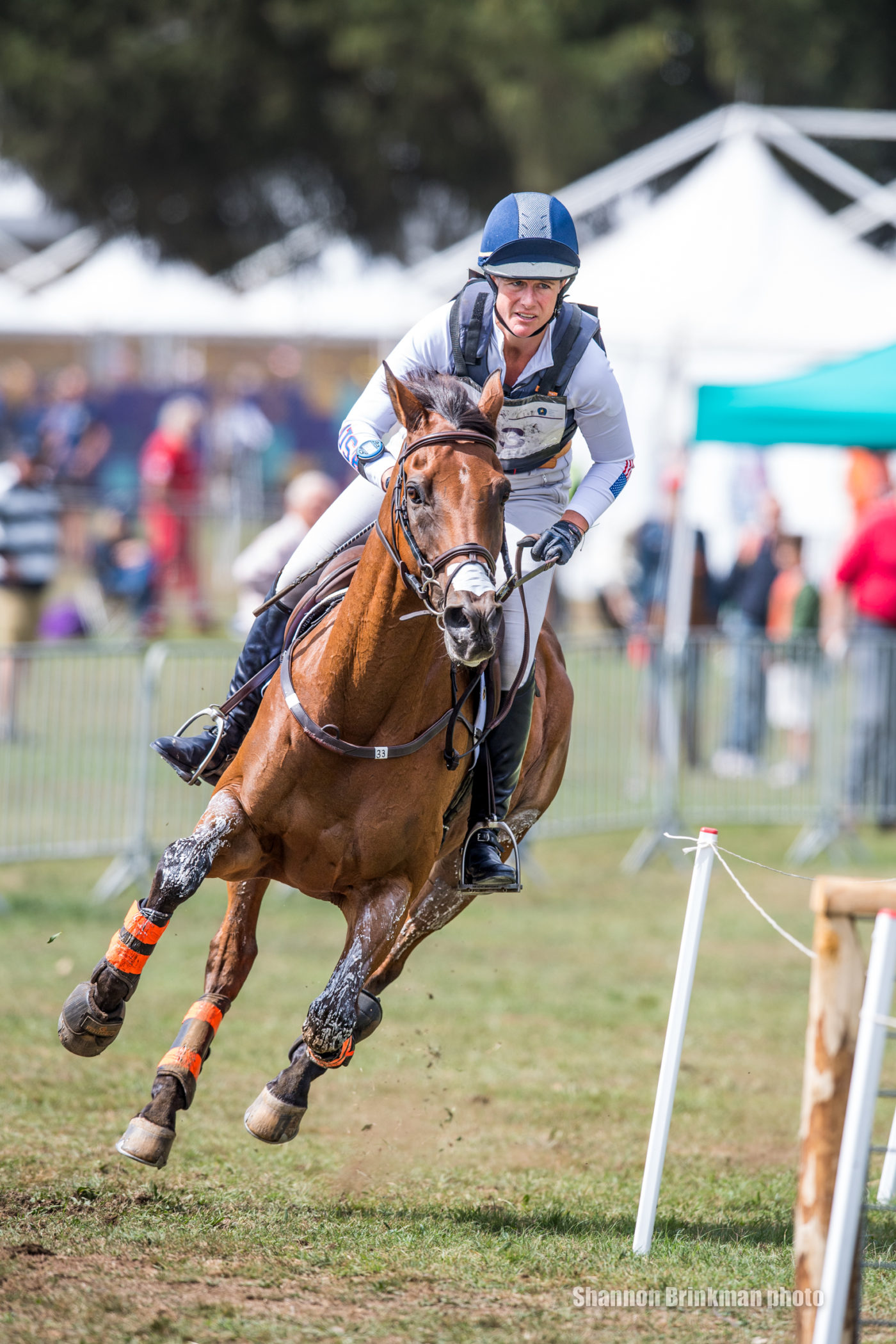 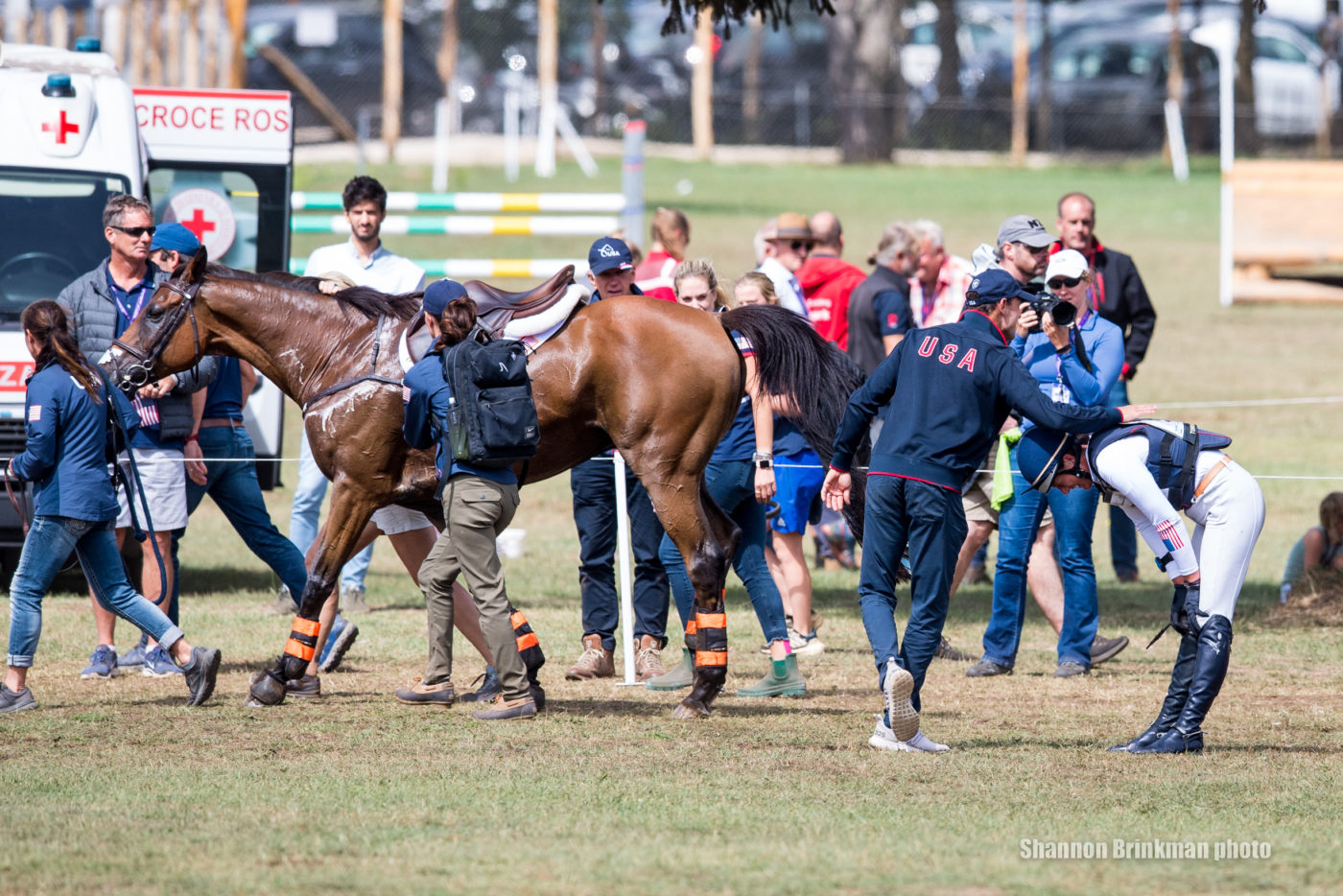 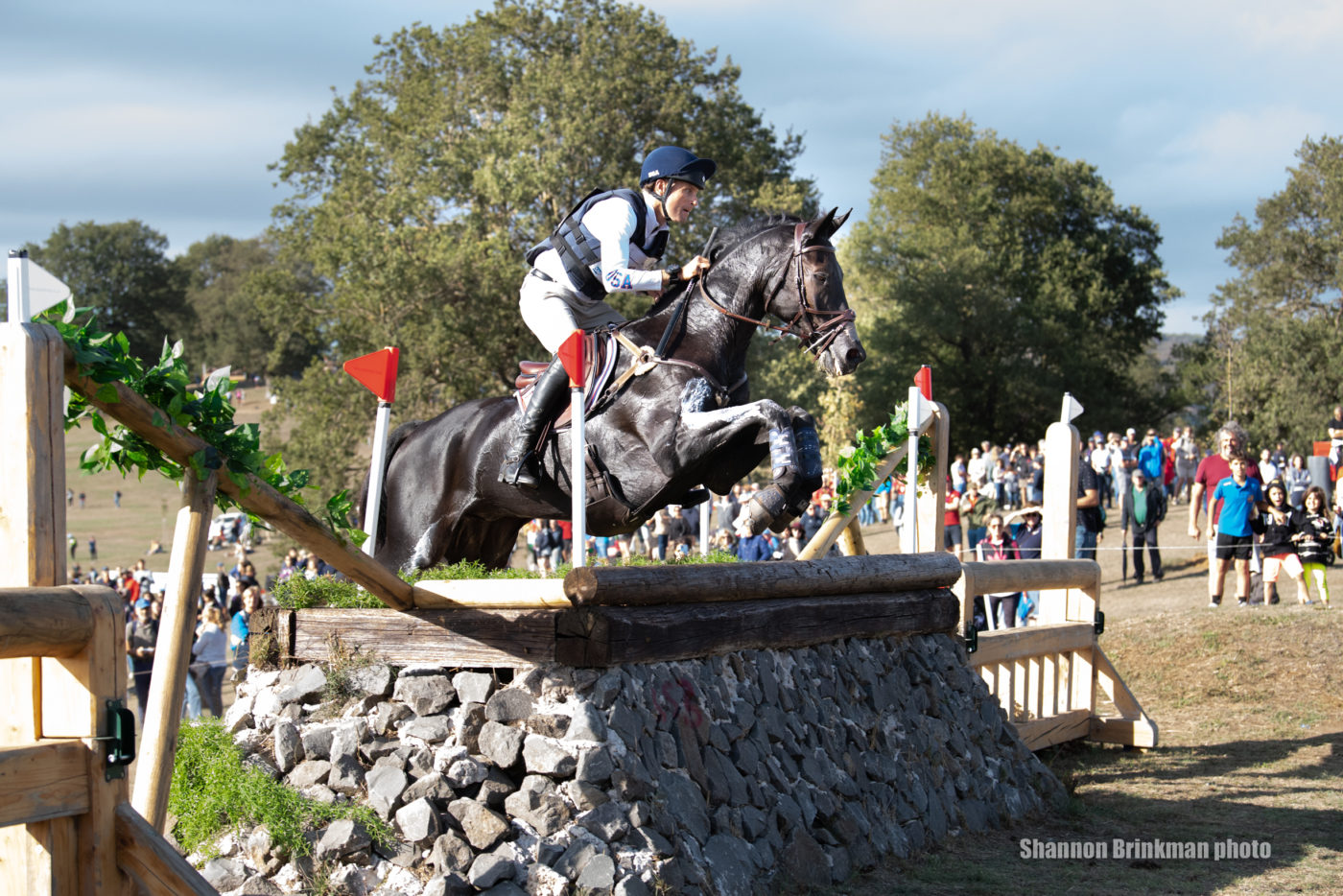 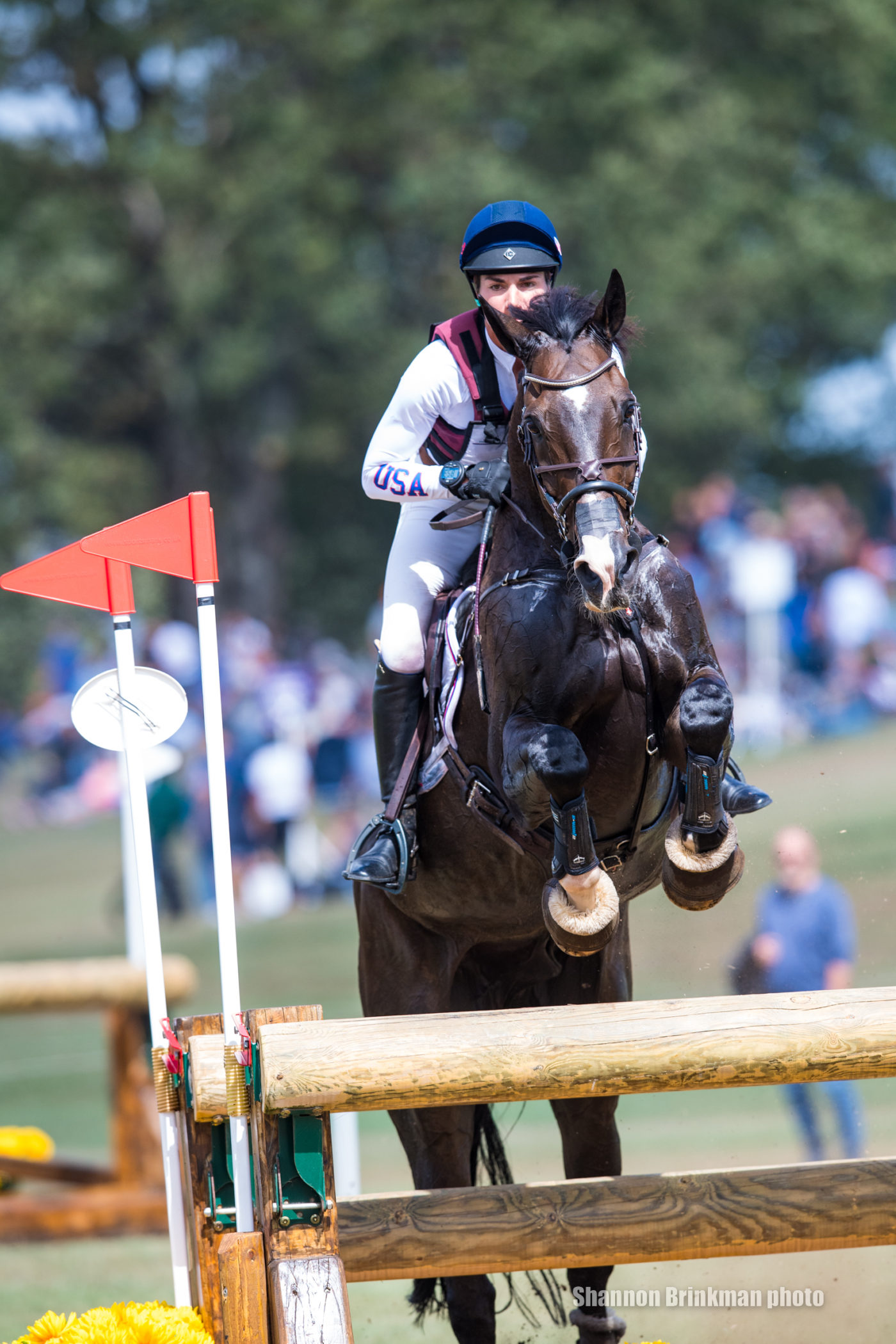 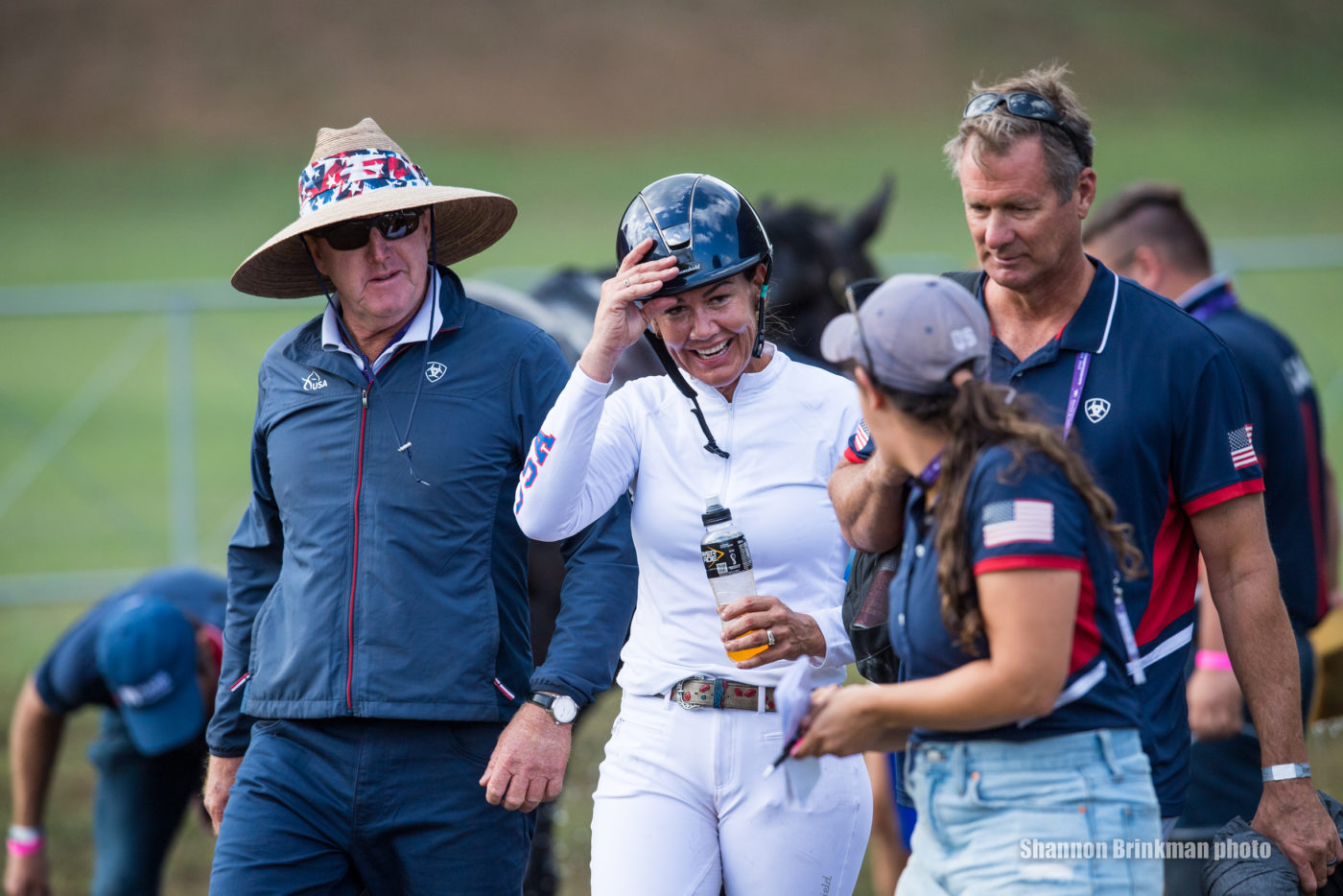