It was a good day for Tamra Smith at the Galway Downs International Event in Temecula, California, as she leads both the CCI3*-L and CCI4*-L divisions.

En Vogue (Earl x Laurena) has only been competing at the four-star level since September, finishing second in her move-up at Twin Rivers, and sits poised for another victory. Smith and Ruth Bley’s 14-year-old Hanoverian mare scored a 28.5 in today’s dressage in front of the ground jury of Jane Hamlin (USA), Robert Stevenson (USA), and Helen Brettell (GBR) to lead the CCI4*-L.

“She’s green at the level,” said Smith, who was nonetheless very pleased with the mare’s test. “I didn’t love my changes – they were really the only things I could say we need improvement on. She had her back just a little bit tighter than I wanted it, so one of my changes was late and the other was clean but it wasn’t great . . . but she’s really trusting me and she was with me the whole time.”

“I’ve been riding her since February, and it’s been a matter of getting her to trust me,” Smith continued. “She’s a mare so you’ve got to slowly finagle your way in there, you can’t just be there. Especially with the atmosphere in that ring, she was so good. I was really proud of her.”

“I’ve been pleasantly surprised,” Smith said of “Evie’s” move-up to the four-star level. “I took her to Kentucky to do the AEC in the Intermediate and the course was quite difficult, hard to make the time, and I went, ‘We’ll see what we’ve got’ and she was amazing around that course . . . so I went, ‘I think she’s ready.’ I did the CCI4*-S at Twin Rivers and she was unbelievable. She’s such a trier and she’s really trusting me. I feel that since Kentucky through to now she’s just really learned to trust what I ask her to do. She’s such an amazing cross-country horse, it’s really fun to ride her cross-country.”

While she hasn’t had a close look at the course for Saturday, Smith said she likes the flow of what she’s seen. “It looks like a typical modern cross-country course where the time looks like it’s going to be hard to make, which is good. I know I’m on a good cross-country horse so I’m excited about it.”

Smith also leads the CCI3*-L aboard another one of Ruth Bley’s horses, the 10-year-old Hanoverian gelding Danito (Danicer x Wie Musik). She and Danito scored a 24.5 to lead the division by a margin of more than 7 points.

“It was his best test to date,” Smith commented. “I am super proud of him. He’s been a tricky horse because he has all this movement and then he get tense because he doesn’t know what to do with it and then he kind of holds himself, but he kept kind of going with it [today] and had expression but relaxation and accuracy – I can’t really ask for him to be better.”

Danito originally came to Smith as a sales horse last year, but she convinced Bley to keep him after she felt how talented he was. “I rode him for a month and then I called Ruth and said, ‘Are you sure you want to sell him?’ and she said, ‘Why?’, and I said, ‘I think he’s got all the ingredients to be a top horse.’”

They got off to a bit of a rocky start, but it’s been all up from there. “He just keeps trying and he’s fancy and jumps great and gallops great. He’s kind of an unassuming type when you see him because he’s built with these shorter legs and bigger body and looks kind of like a Quarter Horse, but when he’s under saddle he doesn’t look like that at all, and he really moves and he’s super powerful.”

Jess Hargrave and Regenmann, her own 12-year-old Trakehner gelding, lie in second place on a score of 31.6.

The CCI4*-L and CCI3*-L will take a break tomorrow while the CCI2*-L has their turn in the sandbox, starting at 8:00 a.m. tomorrow morning.

In the Training Three-Day, Whitney Tucker Billeter and Bill’s Midnight Magic (Espri x Rena Ramzi), John Herich’s 15-year-old Hanoverian gelding, came out on top of the 17-horse field on a dressage score of 25.9.

Tucker Billeter is assistant trainer to Erin Kellerhouse at Swift Ridge Eventing, which is based out of Galway Downs. Kellerhouse and Bill’s Midnight Magic previously competed through the CCI* (now CCI2*-L) level before the ride went to Tucker Billeter. “I’ve just been having fun with him,” she said. “I took him to the AEC last year in Colorado and did the Novice and finished third, and then last year he won the Area VI Training Horse Championship. He’s just really fun, been there and done some stuff and is just giving me really good miles.”

“He’s always a little tricky in the dressage because the longer you’re on him the more amped he gets,” confided Tucker Billeter. “So with him, it’s really trying to time everything right – not doing too much in the warmup, not being on him too long in the warmup, doing enough in a pre-ride earlier in the day. It benefitted him to have the jog today to get him out and doing more and keeping his brain busy without getting his blood up because that tends to be when he gets really spooky.”

“The course looks really good – it looks fun,” Tucker Billeter said. “I think for him the biggest thing is that this is home for us so making sure that he’s paying attention and willing to go out there – he can be a little barn sour sometimes. I’m hoping he’ll want to play the game tomorrow.”

The first Training Three-Day competitor will set out on roads and tracks at 1:30 p.m. tomorrow. 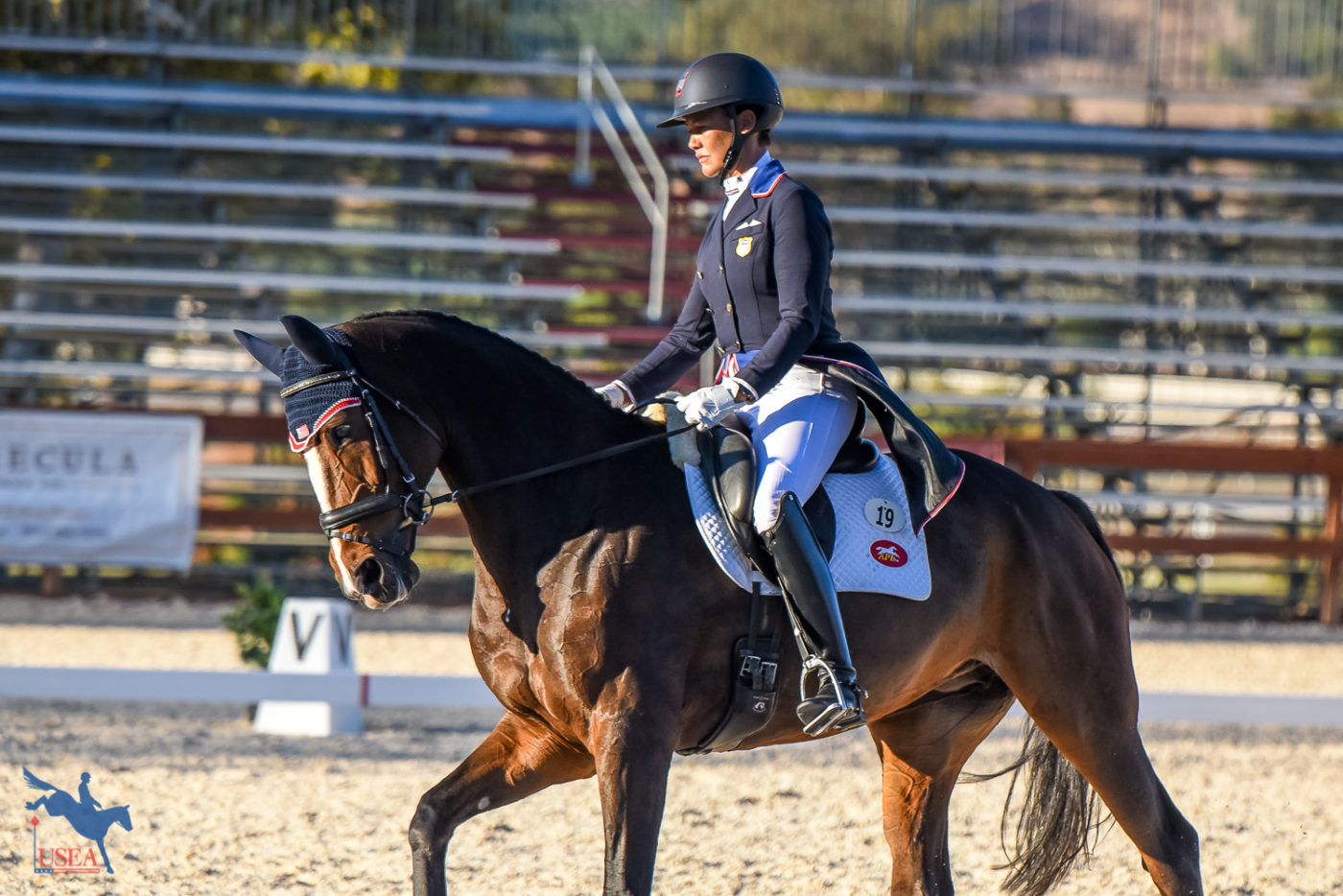 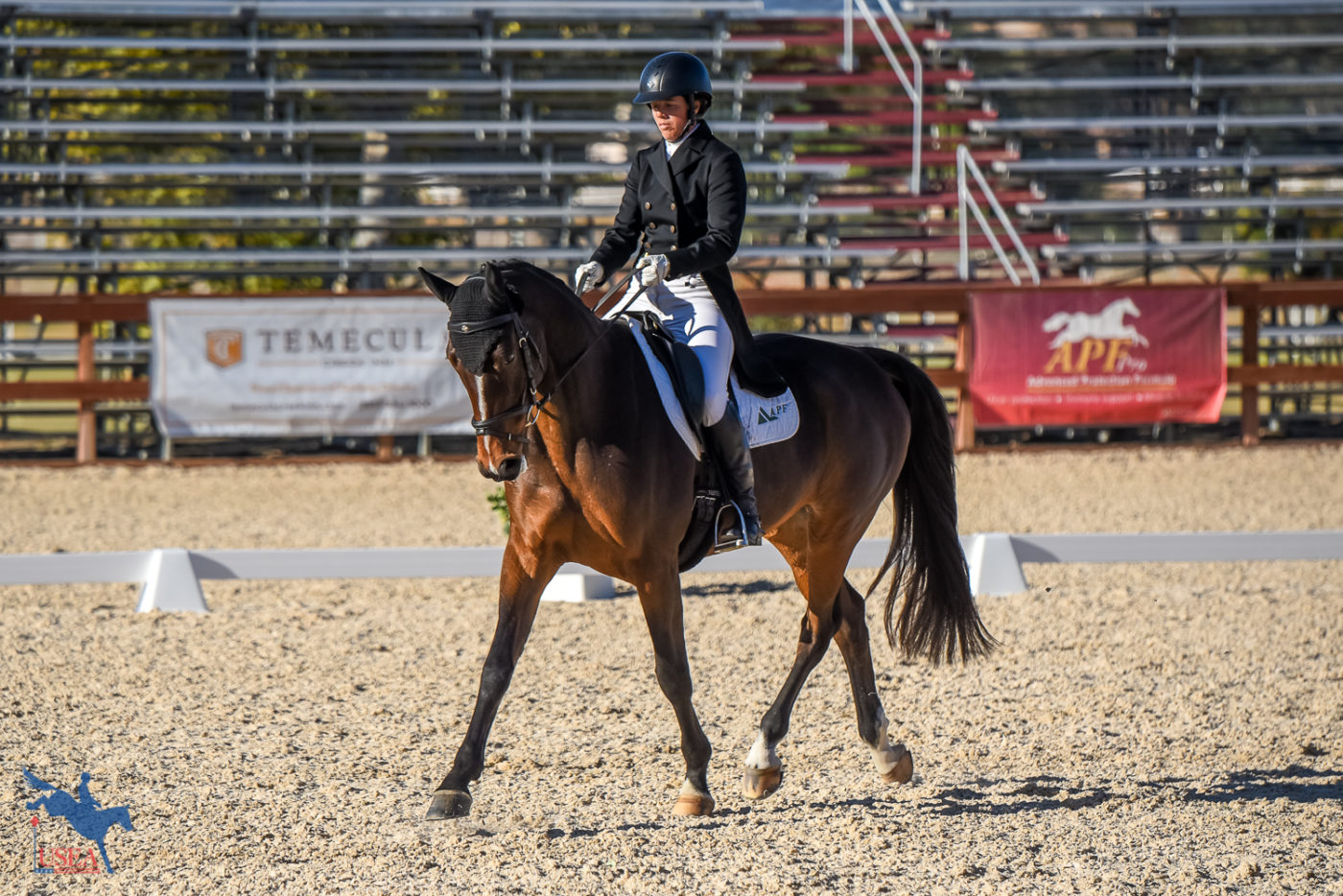 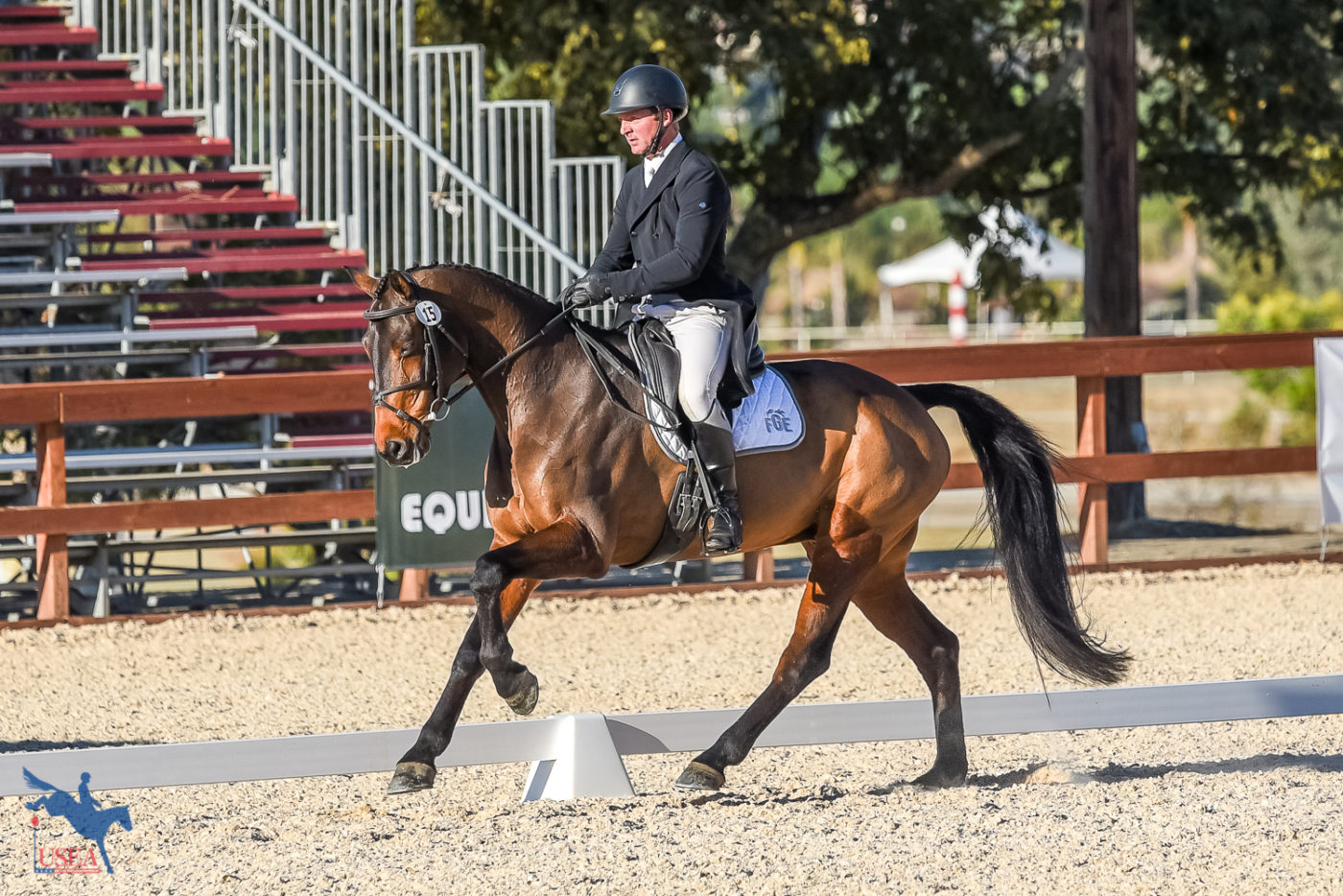 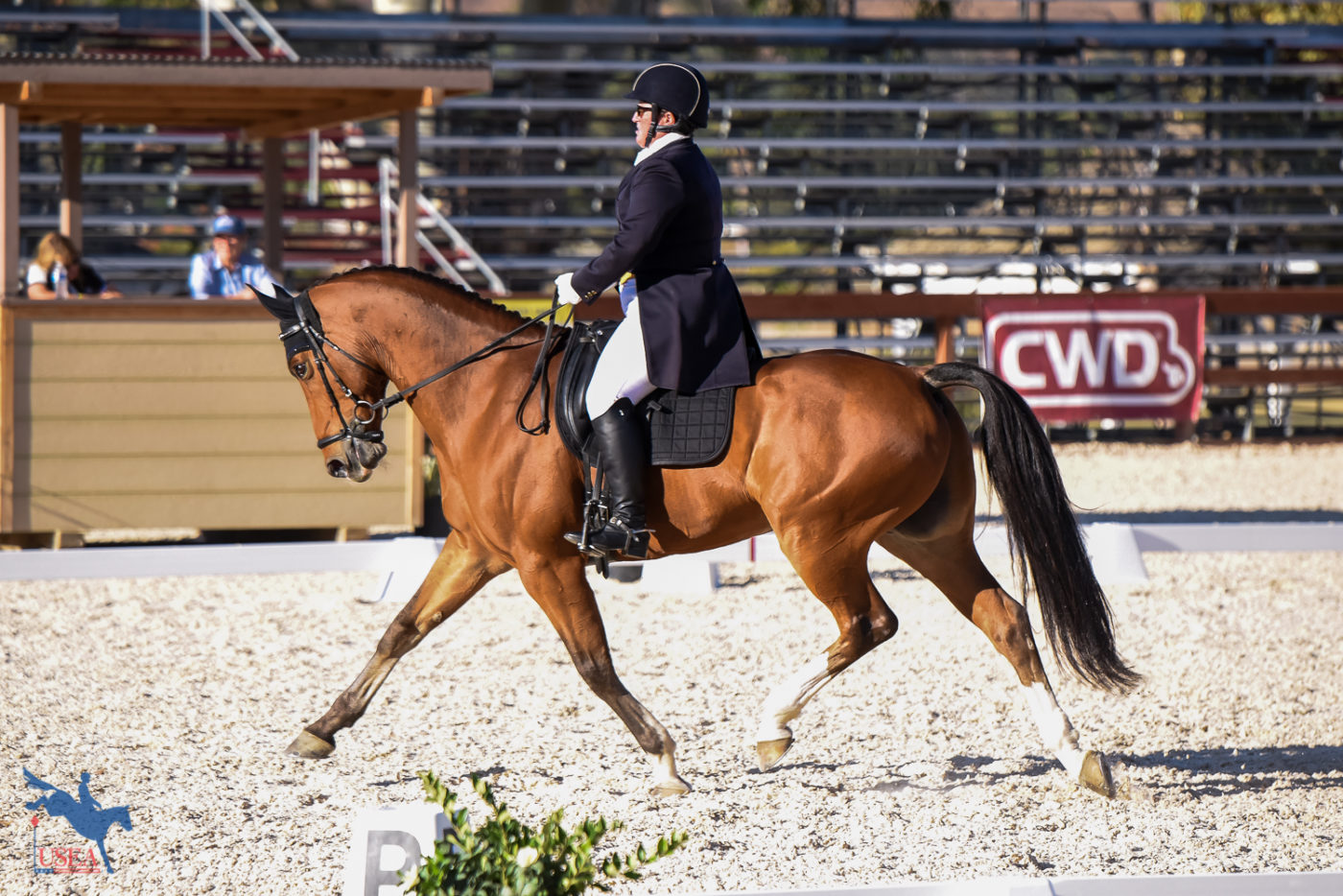 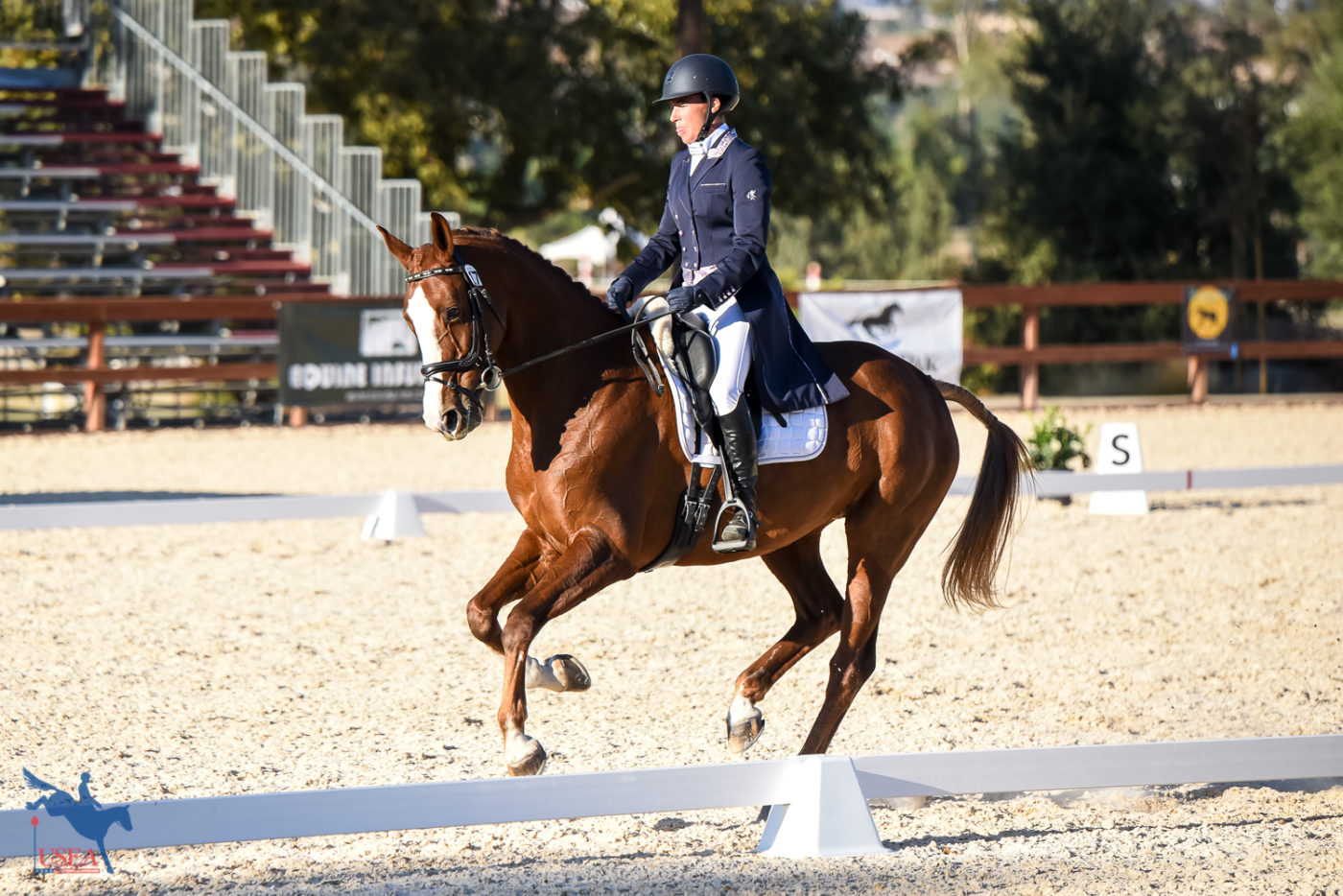 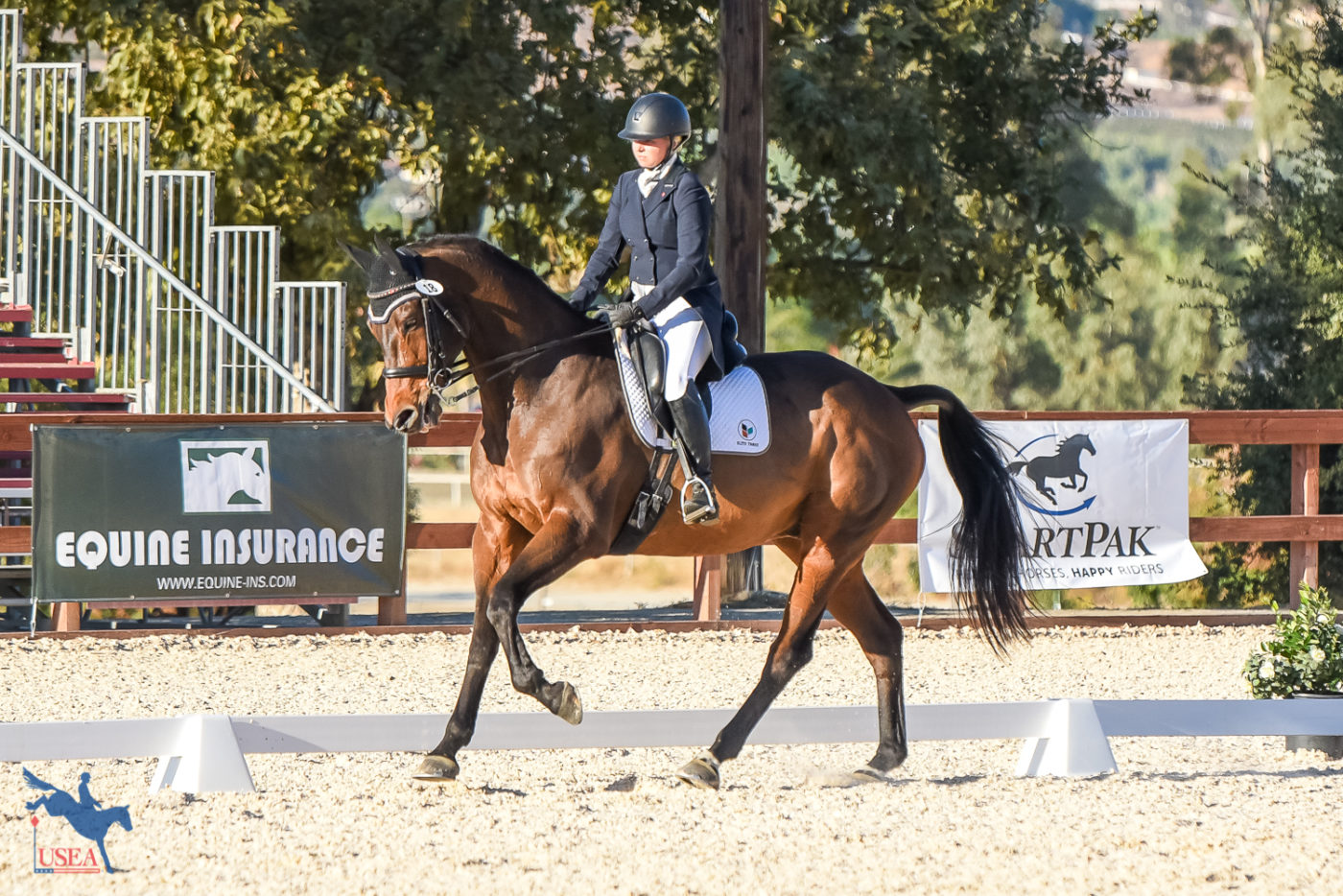 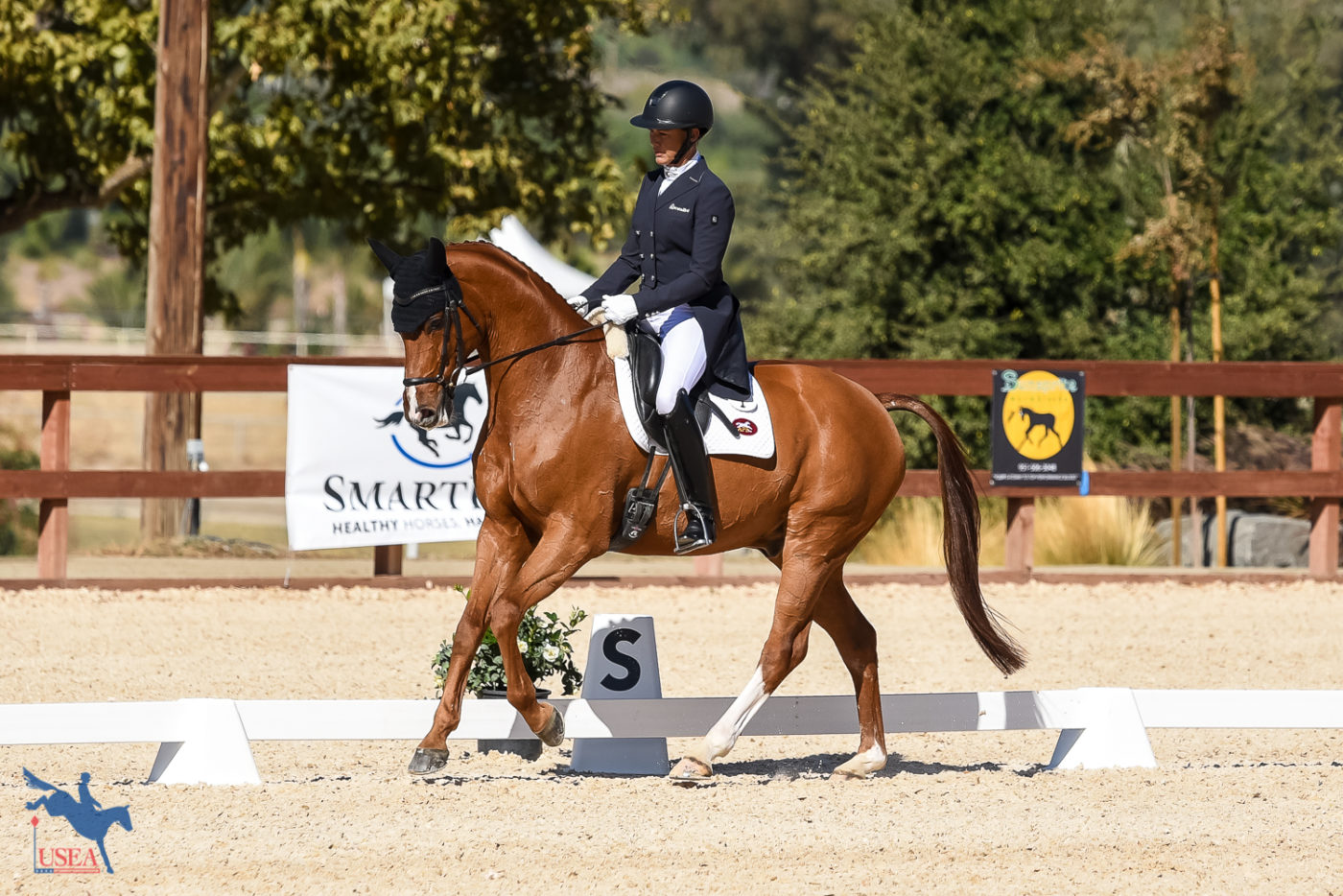 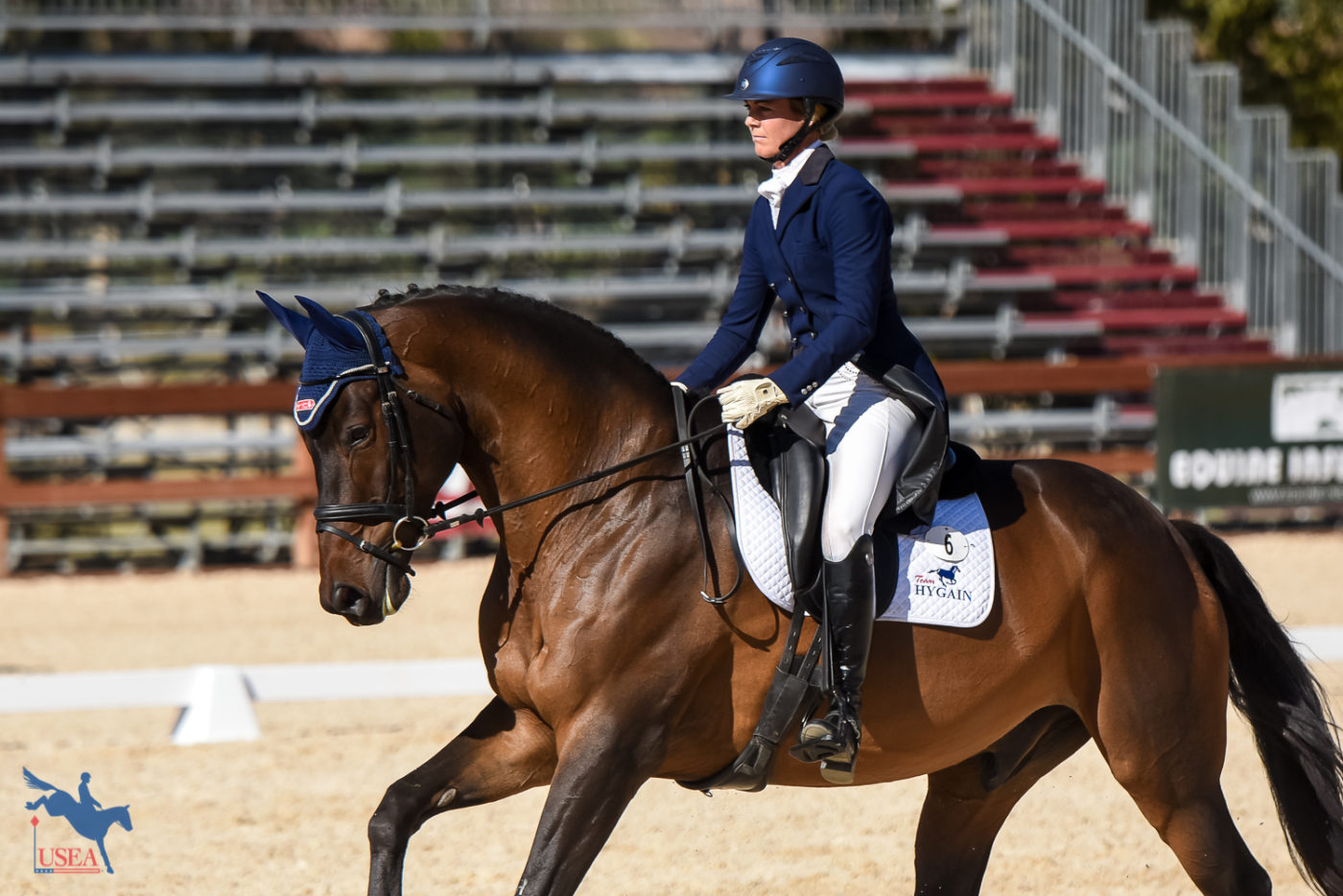 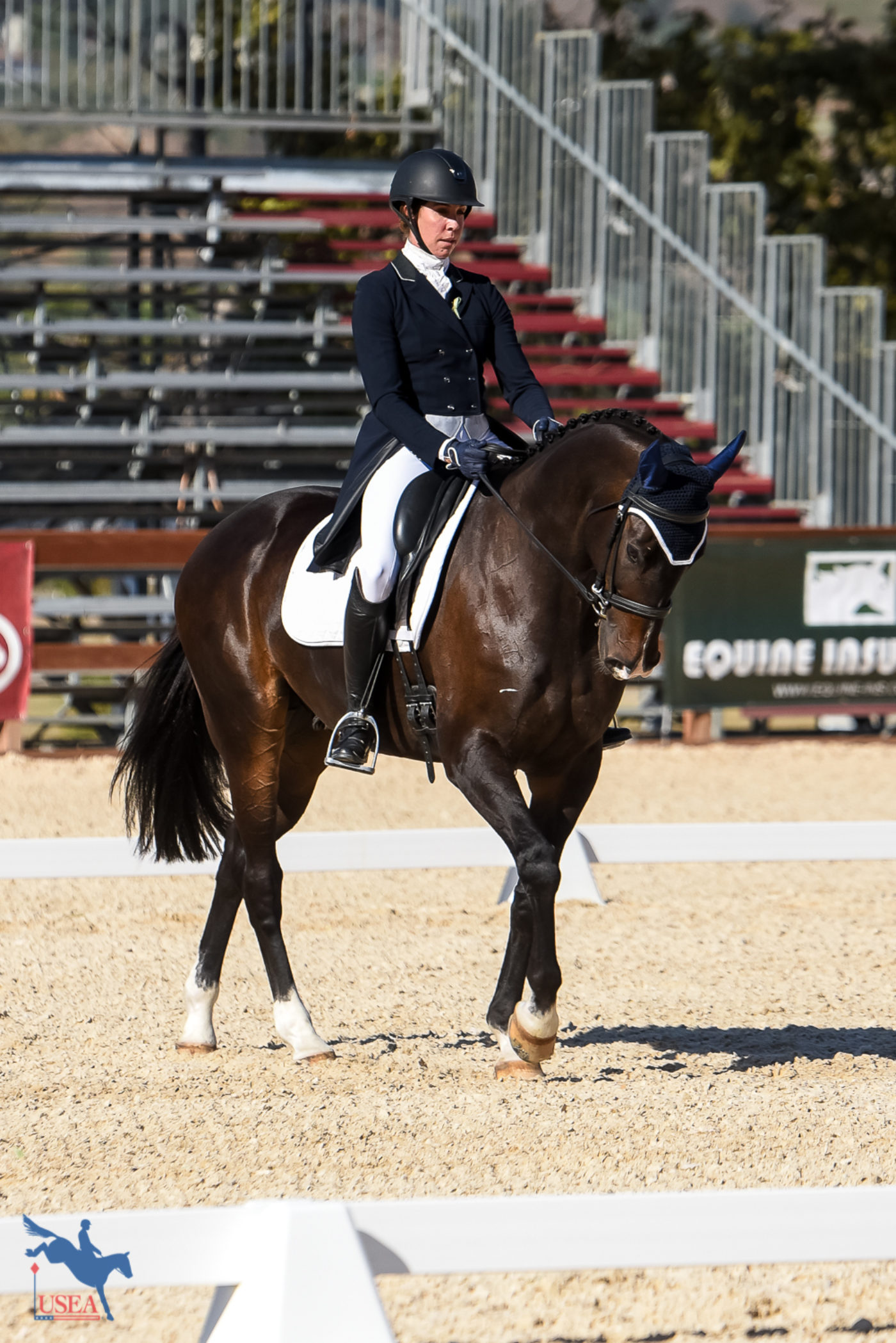 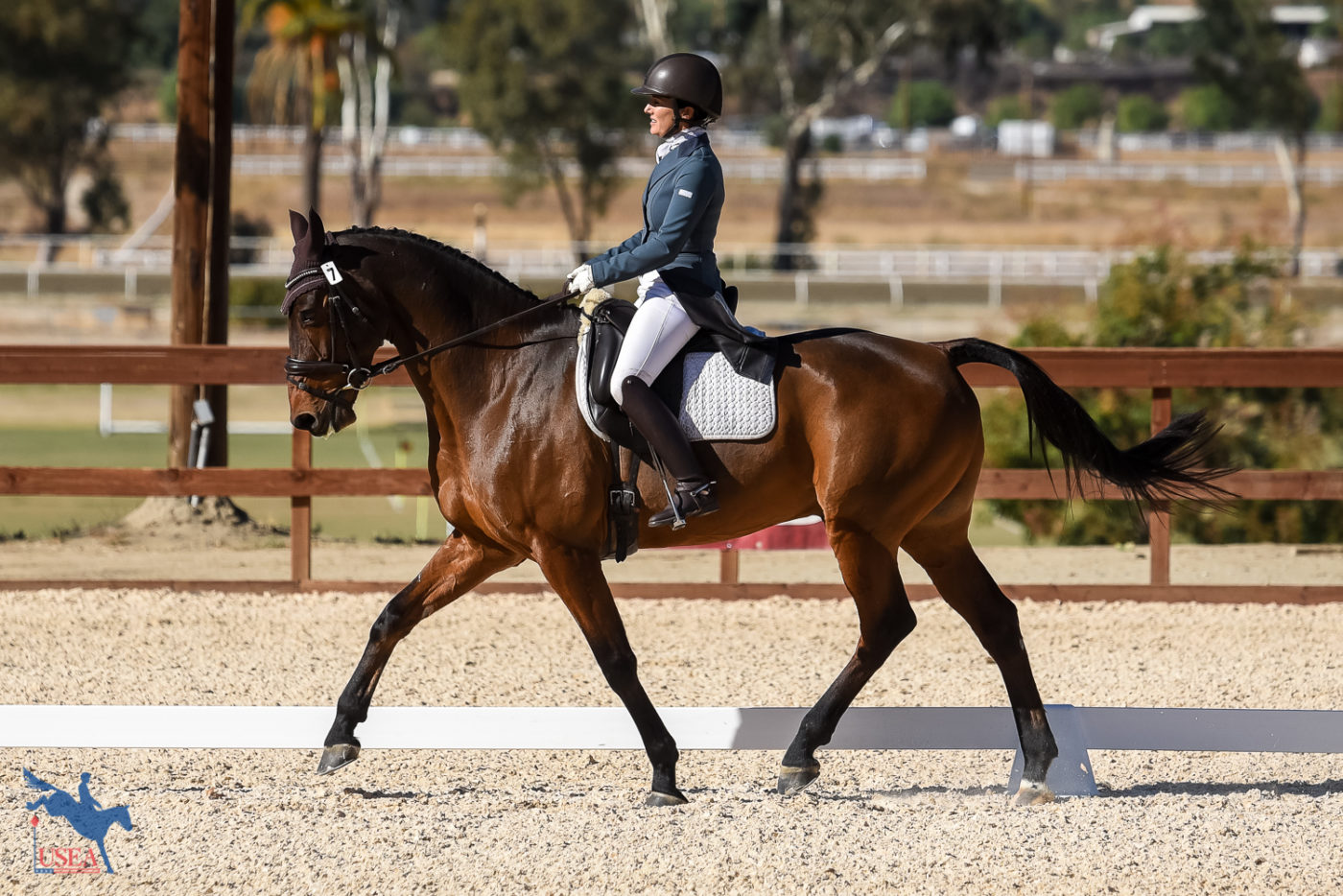 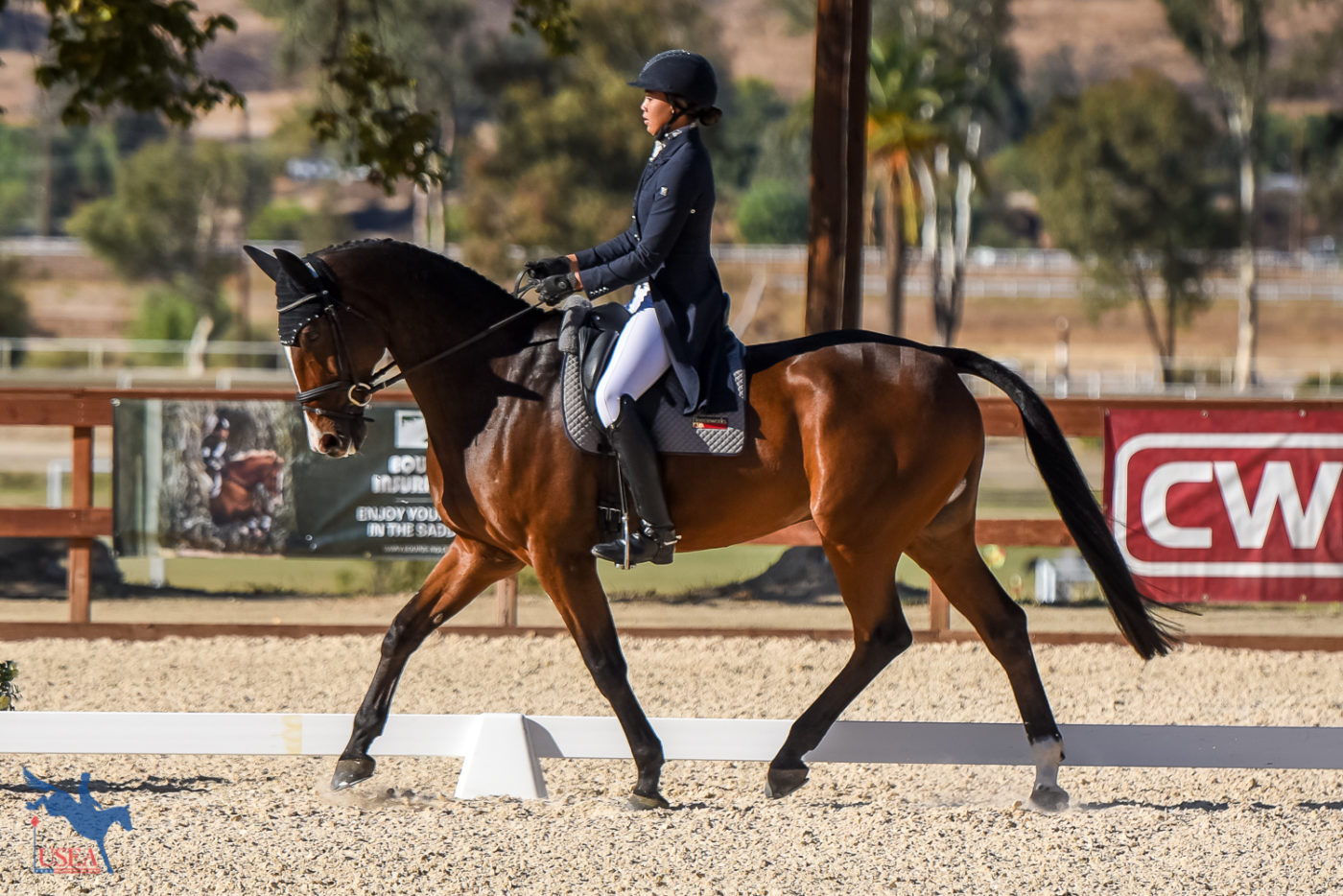