Klimke Gallops to the Lead; Symansky and Donner in Top 10 on Cross-Country Day at WEG

Captain Mark Phillips got it right when he said, “The sport of eventing had a wonderful day." Eighty-one riders representing 23 countries set forth on Phillips’ championship course this morning for the cross-country portion of the eventing world championship at the FEI World Equestrian Games (WEG) at the Tryon International Equestrian Center (TIEC) in Mill Spring, North Carolina. Clean rides inside the time were the ticket to the top of the leaderboard today as tightly-packed dressage scores meant that even a few seconds over the optimum caused a significant shift in the placings.

Ingrid Klimke (GER) and SAP Hale Bob OLD (Helikon xx x Goldige), her own 14-year-old Oldenburg gelding, were the last pair out of the start box for the German team. Performing their role as team anchor admirably, Klimke and “Bobby” came home right on the optimum time of 10 minutes to move up into the top spot on a score of 23.3.

“He was really fit,” Klimke said of Bobby. “He really cantered up the hill and I could ride for time. We had wonderful team spirit, and I’m really happy. It was a good feeling. He is always a fast horse. His favorite is going cross-country, he had [great] energy.”

“Being last and seeing that the others had trouble was really tough because they all gave their best,” Klimke continued. “For me it was good to see because I would have taken the same decision that Julia did, go for four at the corners, but I knew that the five was better so it was really good communication between us riders.”

As Klimke anchored for the German team, so did Rosalind Canter (GBR) and Allstar B (Ephebe For Ever x Narenca B), the 13-year-old KWPN gelding owned by Canter and Caroline Moore, leaving the box last for the British team. Coming home nine seconds under the time, Canter and Allstar B secured silver medal position for themselves heading into the final phase on a score of 24.6.

“It’s my first time at WEG,” said Canter. “Allstar B is just the most fantastic horse. We’ve grown up together, learning together. He really delivered for me. Today was all about the team, as was yesterday. I’m in silver medal position at the moment so it’s really exciting, but I have to thank our whole team and support team because I couldn’t do it without them. We all knew our horses were fit today, so we all just went for it, and we really delivered.”

“He was super,” Ennis said happily. “He flew around, and it felt very easy. Up the hill, he handled it like a racehorse.”

Lynn Symansky and Donner (Gorky Park x Smart Jane), the Donner Syndicate’s 15-year-old Thoroughbred gelding, were the sole U.S. combination to go double-clear across the country in today’s competition. The pair crossed the finish line just four seconds under the optimum time to move from 18th place to ninth place on their dressage score of 28.3.

“My horse is pretty rad out there,” Symansky said with a grin. “I pretty much just soak up every moment. I’ve been with him a long time . . . It’s just so special to be here in front of the home crowd and getting cheered the whole way around, and come through the final – you couldn’t ask for more. He couldn’t have given me any more today.”

“You definitely feed off the crowd,” she continued. “Just to have that much cheering. It’s pretty special to be here in my home country. I have a lot of people that came out to support – it’s a pretty special opportunity.”

Phillip Dutton and Z (Asca x Bellabouche), the 10-year-old Zangersheide gelding owned by Thomas Tierney, Simon Roosevelt, Suzanne Lacy, Caroline Moran, and Ann Jones, jumped clean but were 16 seconds over the optimum time, adding 6.4 time faults to their dressage score to drop down to 21st place on a score of 34.

“We needed a clear round so that was my first priority and going as fast as I could without taking too many risks,” Dutton explained. “I was a little over the time but overall I’m pretty pleased and very proud of my horse.”

Boyd Martin and Tsetserleg (Windfall *PG* x Thabana), Christine Turner’s 11-year-old Trakehner gelding, William Coleman and Tight Lines (Turgeon x Merindole), The Conair Syndicate’s 11-year-old Pur Sang gelding, and Lauren Kieffer and Vemiculus (Sazeram x Wake Me Gently), Jacqueline Mars’ 11-year-old Anglo Arabian gelding, all ran into trouble on course today. Martin and “Thomas” picked up 20 jumping faults at fence 10B, the Mars Sustainability Water, and additional 11.6 time faults to sit in 54th place on 58.7. Coleman and “Phish” picked up two refusals, one at fence 10D and one at fence 14B, plus an additional 11.6 time faults for a two-day score of 87.2 and 68th place overnight. Kieffer, who was competing as an individual for the U.S., fell from “Bug” on the landing from fence 18A and the pair were eliminated.

The four team riders from Great Britain put in four clear rounds inside the time today, securing gold medal position heading into the final phase of competition. They sit on an unchanged score of 80.8, 8.2 points ahead of the silver medal team. All five of the British riders sit inside the top 20. “Every rider had clear rounds – they were class acts.” said Richard Waygood, British Eventing’s Performance Director. “They sat beautifully, they rode beautifully, the horses reacted to them, and it was super.”

The Irish team also had a cracking day with three of their four riders running clear and inside the time to catapult the team from seventh place after dressage to silver medal position following cross-country on a score of 89.0, adding just 1.5 points to their combined dressage score of 87.5. “They did an amazing job,” said Sally Corscadden, High Performance Director of the Irish Eventing Team. “We knew they could do it, and they believed in themselves. the riders had their plans sorted and knew what they needed to do.”

The team from France, which moved from fourth place to bronze medal position, added 8 points to their combined dressage score of 83.8 to sit on 91.8 going into show jumping. Four of the five French riders sit inside the top 20, with all but one of their five riders picking up time faults on cross-country.

Twenty-seven of the 81 rider encountered difficulties on course today, just 33 percent of the field compared to the average 50 percent that typically incur penalties at the world championships. The combinations that caused the most trouble were the Mars Sustainability Water, fence 10ABCDEFG, and the CSX Junction, fence 14ABCD, with problems occurring throughout the numbered elements.

William Levett fell at 10B and an additional three riders had stops. Six riders had trouble at 10C, while three more incurred penalties at 10D, including Sandra Auffarth falling from Viamant du Matz. Fence 10E and 10F caught out one rider each.

Fence 14B of the CXS Junction caused additional issues. Blyth Tait was eliminated for his third refusal on course, Pauliina Swindells fell from Ferro S, and Felix Vogg missed the flag. One rider ran into trouble at 14C and two riders had refusals at 14D.

Lauren Kieffer and Jessica Phoenix both fell at fence 18, Kieffer after the A element and Phoenix after the C element. Fence 18C caused a refusal for one additional rider.

The other issues were scattered throughout the course. Henrique Plombon Pinheiro fell from Land Quenotte Do Feroleto at fence 5A. Fence 9B caused refusals for two riders and Patricia Ryan triggered the frangible pin on the same element. Ryuzo Kitajima activated the frangible device at fence 19, fence 20A caused issues for one rider, Heidi Bratlie Larsen was eliminated for three refusals at fence 22, and Simone Sordi fell at fence 24.

Box Quite, Anna Freskgård’s (SWE) mount, sustained an injury to her right front leg when she tripped after crossing the finish line and was transported to Tryon Equine Hospital by horse ambulance. The 12-year-old mare has been diagnosed with a soft tissue injury and is being treated.

Show jumping competition for the eventing world championship has been rescheduled from Sunday, September 16 to Monday, September 17 due to Hurricane Florence which will pass through the area on Sunday. The final horse inspection has also been postponed. The USEA will release an updated timetable as soon as it becomes available from the FEI. 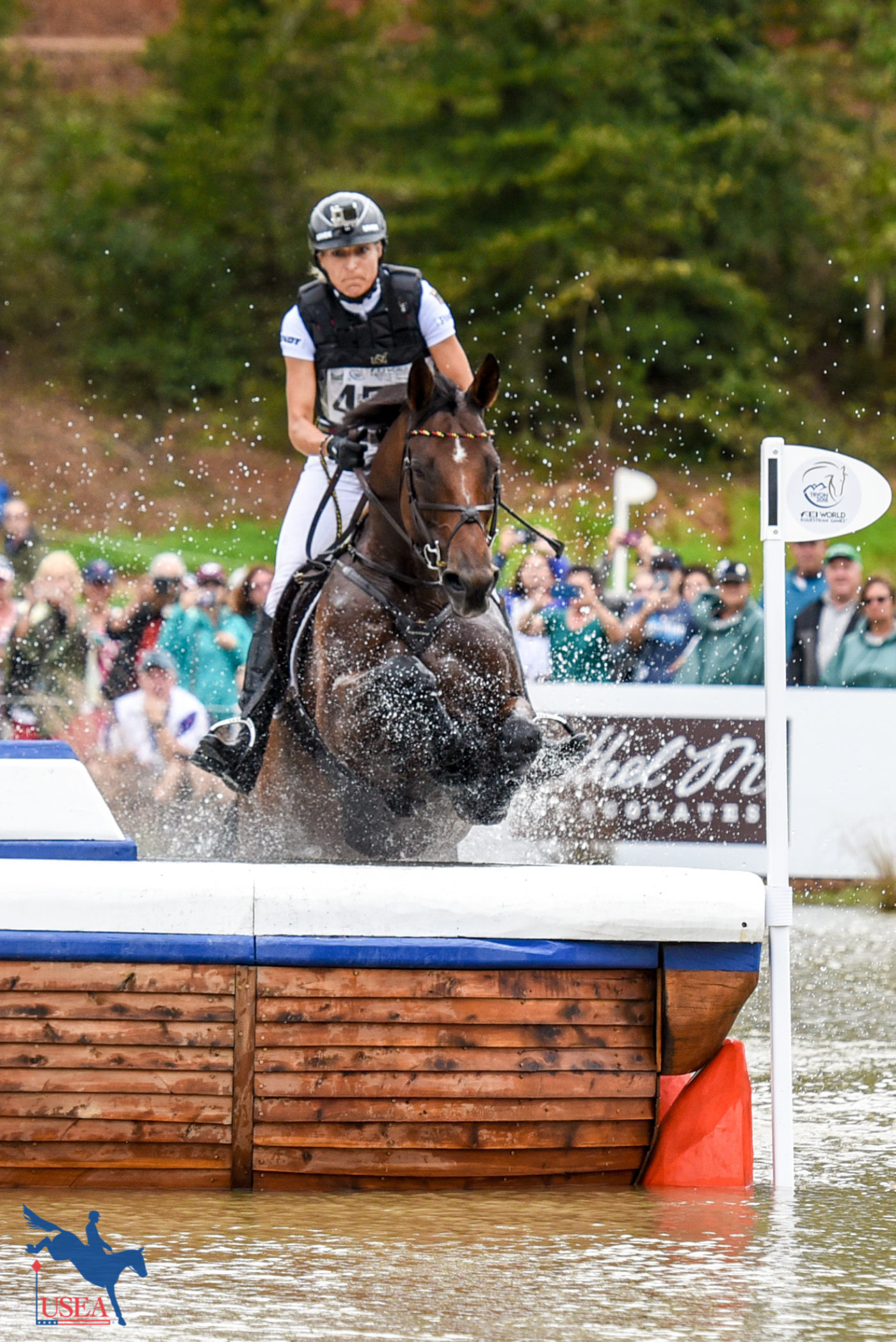 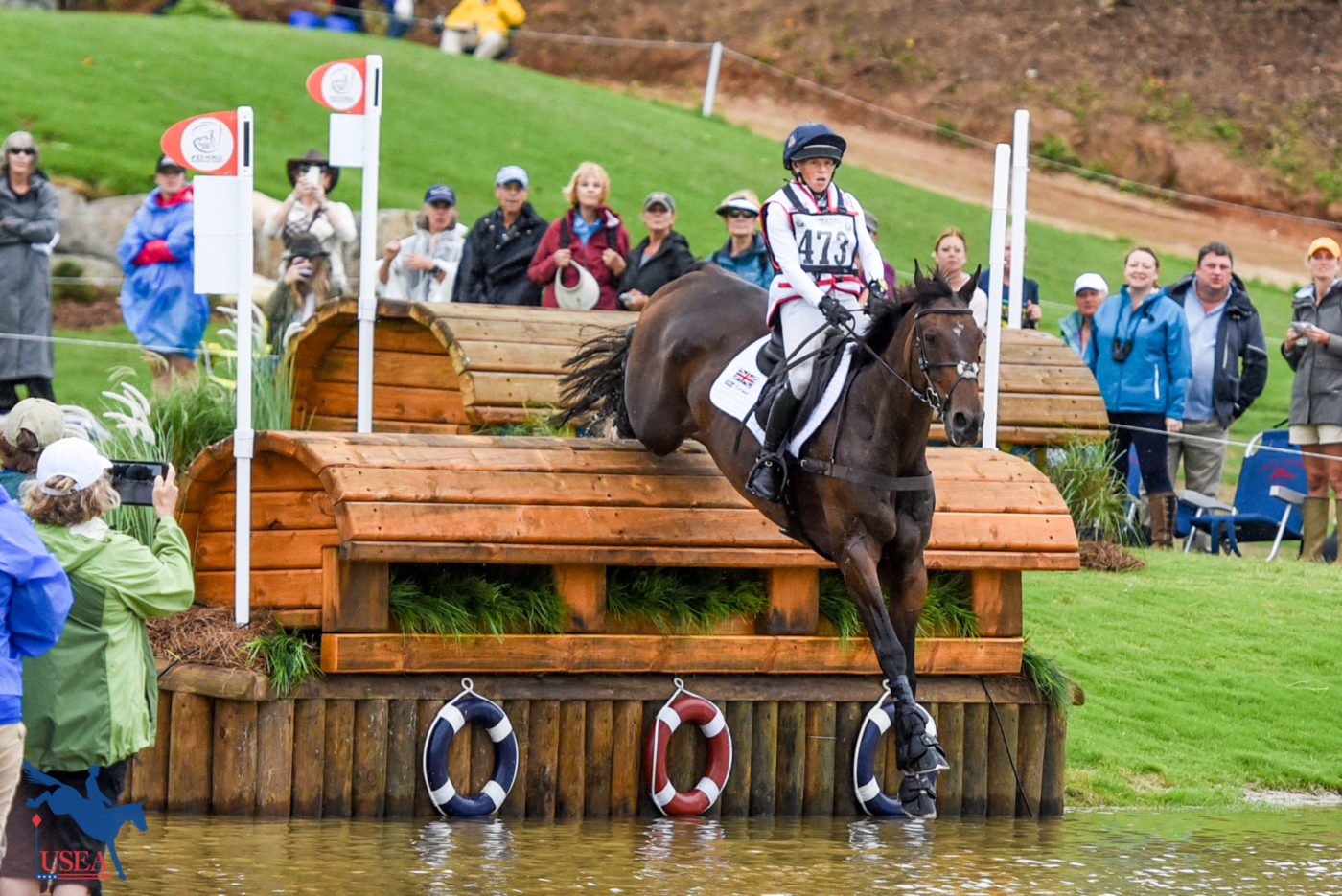 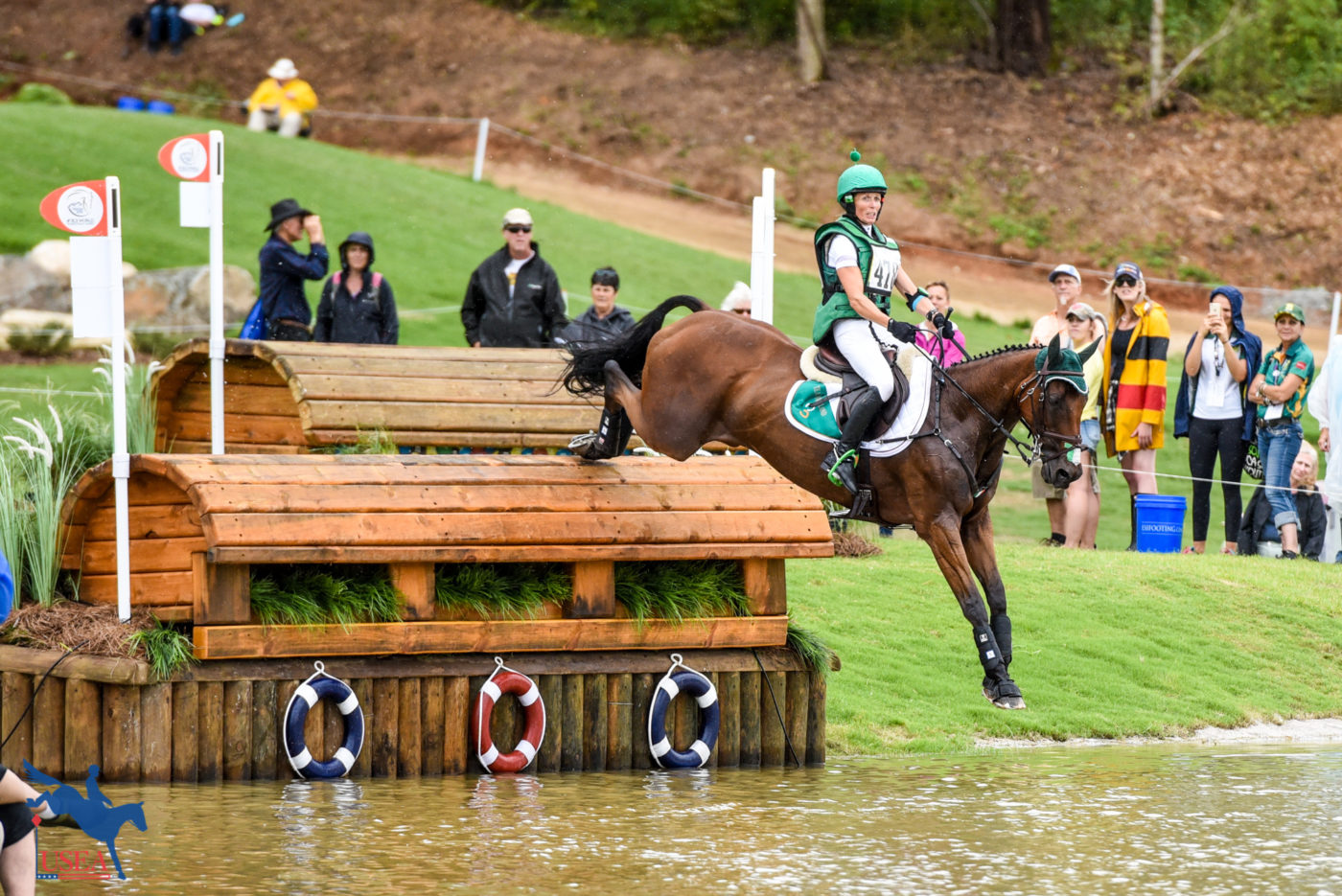 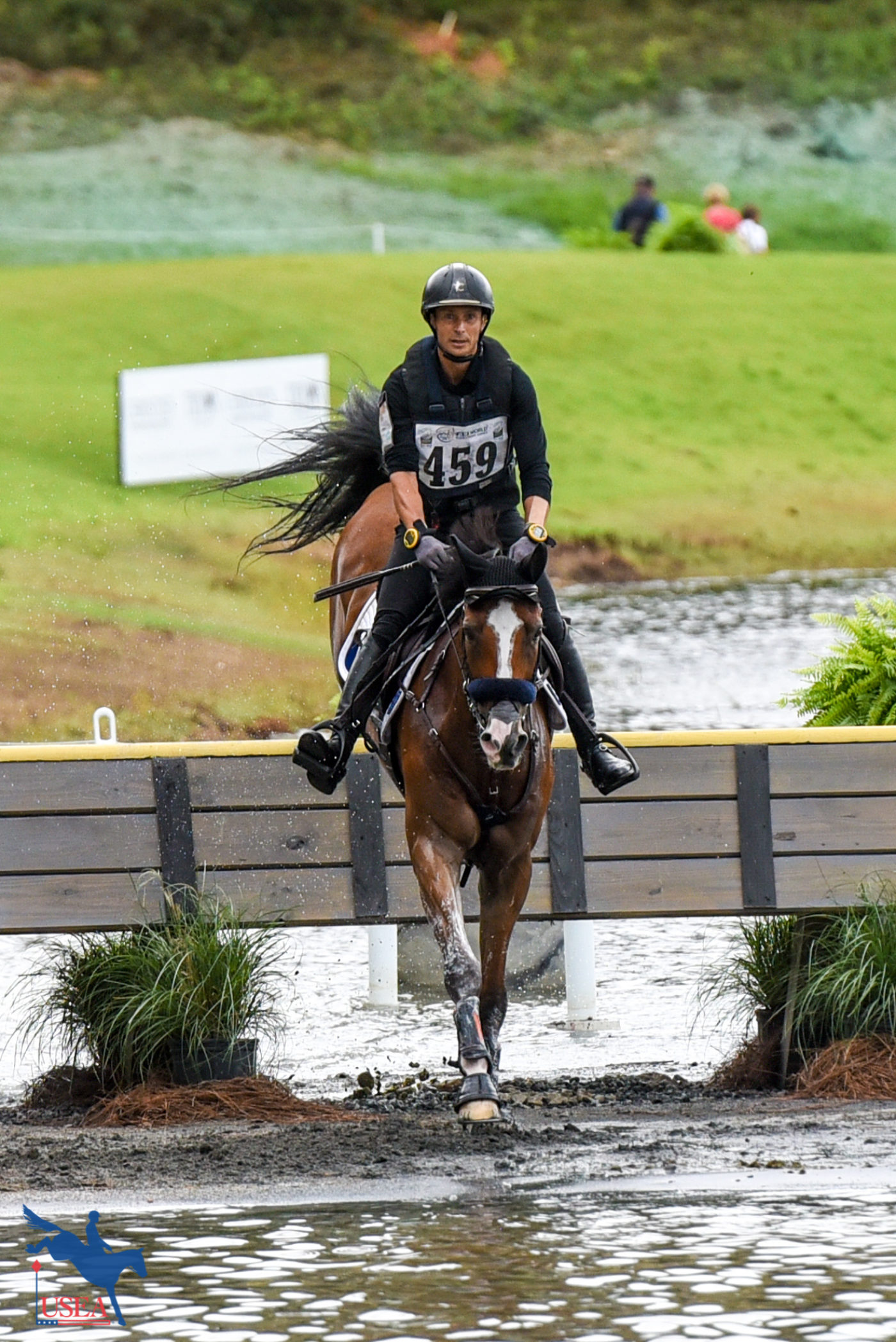 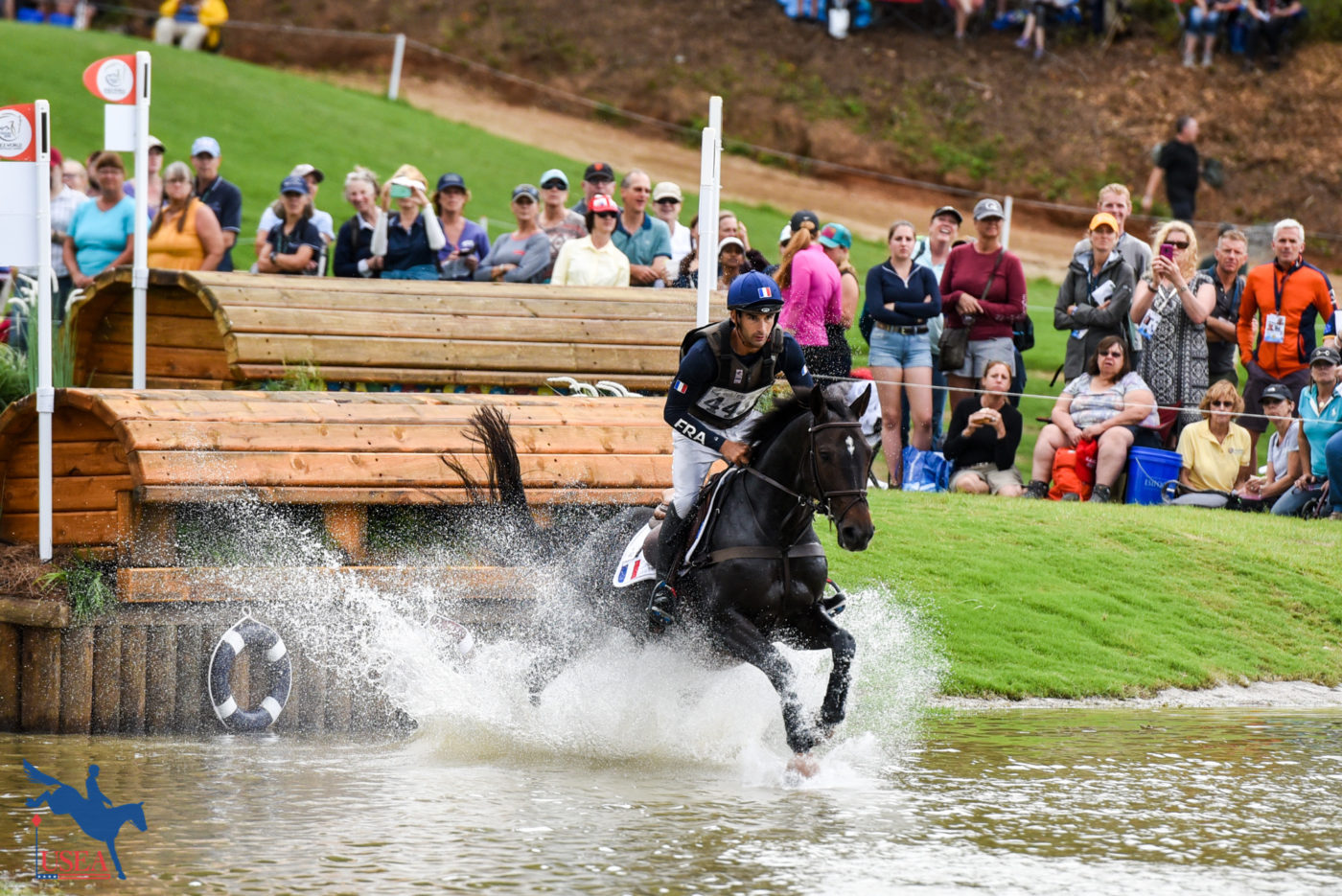 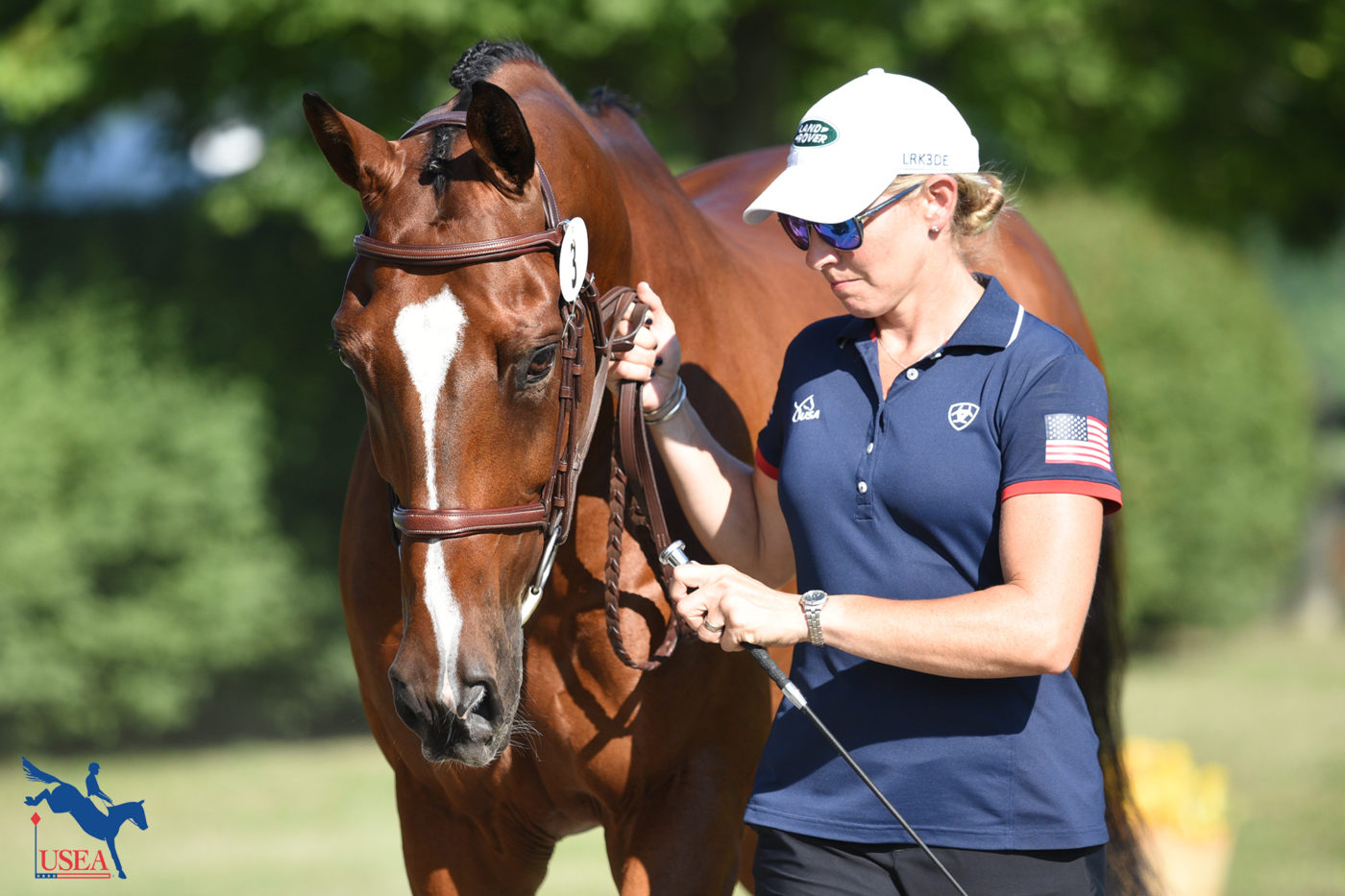 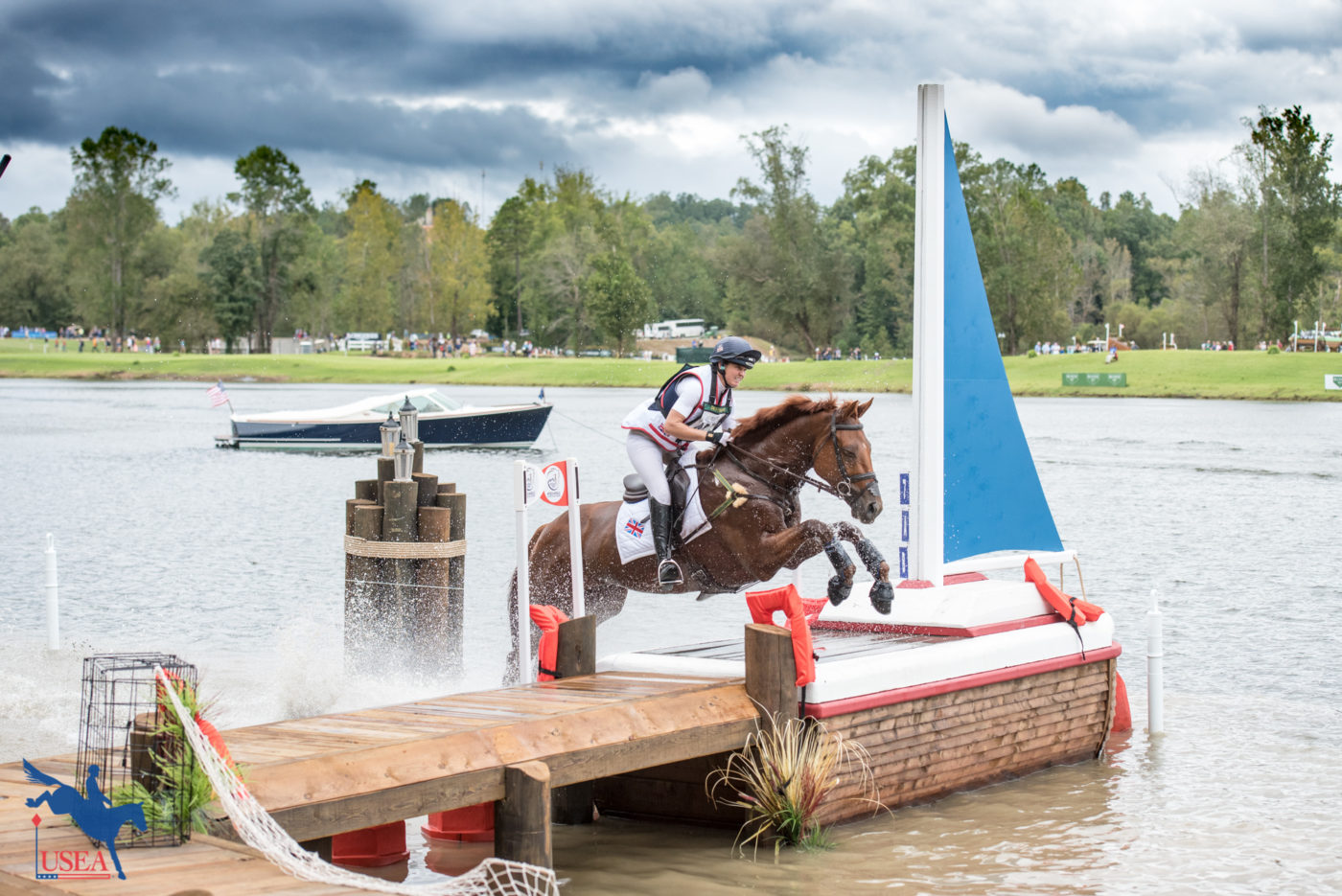 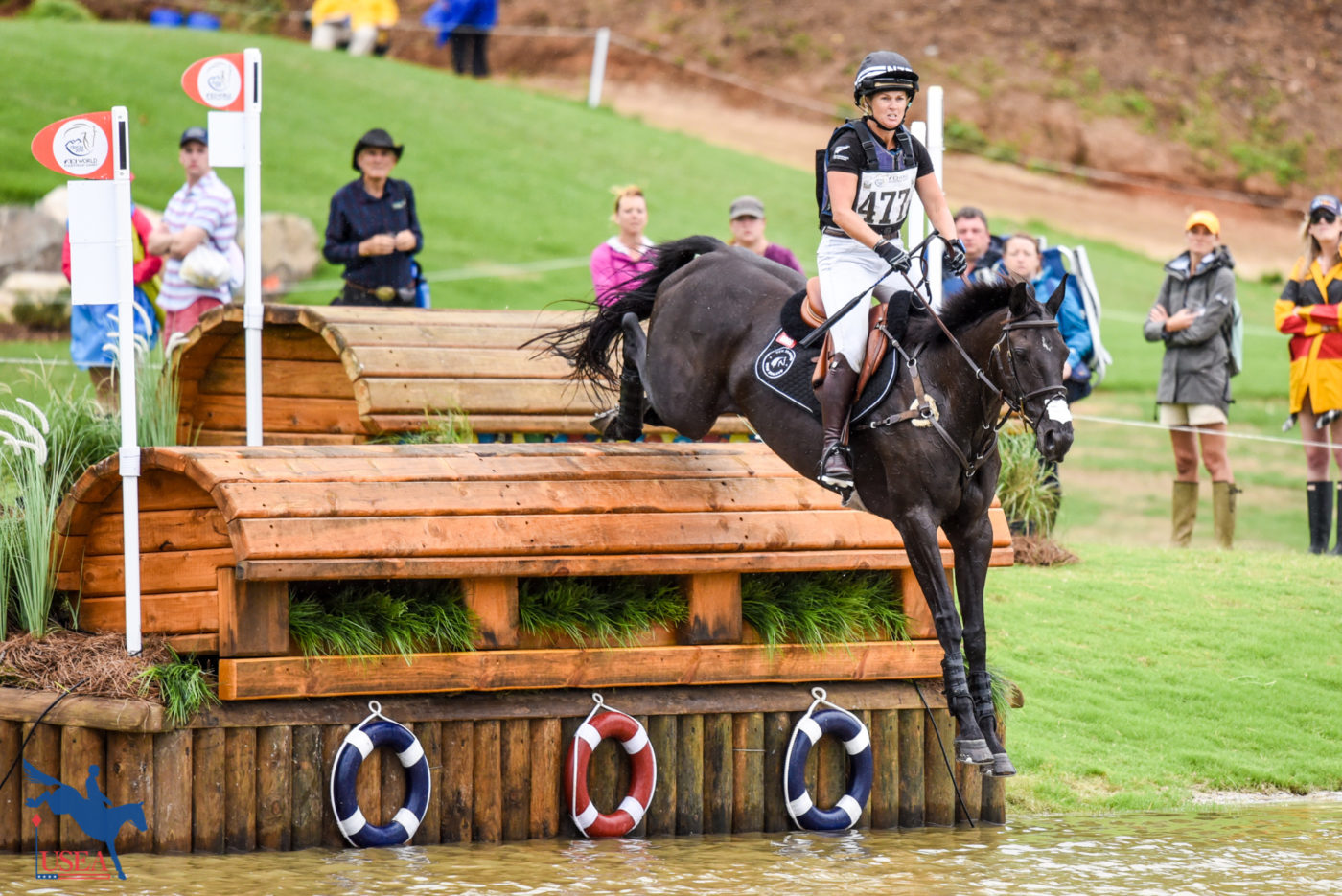