Three five-star first-time horses make up the top three of the CCI5*-L at the Maryland 5 Star at Fair Hill after contesting Ian Stark’s cross-country course on Saturday. It was a successful day with only two pairs retiring and the remaining 22 duos making it home safely. Of the field, 13 pairs made the optimum time of 11 minutes and 30 seconds with only three of the top ten having time penalties. World Number One Tim Price (NZL) moved up from second place to first after issuing a double-clear round aboard Jean-Louis Stauffer’s 10-year-old Selle Français gelding Coup de Cœur Dudevin (Top Gun Semilly x Tiebreak Combehory). They go into the final phase of competition on a score of 27.4, only two points ahead of the second-place pair.

“I was a little bit nervous thinking if it was the right thing to bring a horse halfway across the world with less experience because it kind of puts it all on the line,” shared Price after his round. “I have always believed in the horse and today was the perfect occasion for it with good conditions and a great course that I could just go and try and give him a good education while being competitive. He was exceptional and really jumped beautifully.”

Looking back on their trip as a whole, Price said there was a definite moment where Coup de Cœur Dudevin felt like a proper five-star horse. “There were a few moments in the course that was me or the jumps showing him that it was a five-star because he was a little bit surprised. As a young horse, they go to make a normal jump, and then the back of the jump hasn’t come to them yet. It’s just a bit of fun with that, showing a young horse the ropes. But where he really took it on for me was the white ramps to the corner [at 16ABC] on the big three-strides. He really mowed that down and dealt with the corner on the end nicely.”

Inching up the leaderboard from sixth to second was the U.S.’s own Tamie Smith riding Ruth Bley’s Danito (Dancier x Wie Musik). The 13-year-old Hanoverian gelding was quick on his feet and up for the task at hand while conquering today’s cross-country track adding no penalties to his overnight dressage score of 29.4. Watching him perform today, you would never know that he had recovered from a broken withers just earlier in the year.

“He had kind of a freak accident in the barn,” commented Smith. “I was hoping to actually have him as a contender for the World Championships, but he didn’t have a spring season and it took him four months to get back to being able to ride, and then I was off and away from home. My daughter and my assistant were trekking him back and forth to the pool and the water treadmill hoping that we could get him fit enough. He had done Boekelo the October prior [to his accident] and then his first event was Rebecca Farm this July, where he was really great but not entirely the fittest for that event. He’s been low on the competition miles this year, so to have him go out and do that and step up, but these first-time five-star horses you just never know, and I am super happy with him.”

Making a large leap from tenth to third was eventing legend Oliver Townend (GBR) aboard the 11-year-old Spanish Sport Horse named As Is (Casa de Neves x Paracas) owned by John Peace. “He was lovely,” remarked Townend of his five-star rookie partner. “He started off a bit baby and grew in confidence as he went. He galloped very easy, ears pricked. He is a little bit of a terrier, he knows he is a character, but I enjoyed him a lot and he will definitely come on from the run as well.”

Course designer Ian Stark popped by the press conference to share his overall reflections of the day. He reflected that at home he is known for being a bit gruff, but that he couldn’t help but have a tear in his eyes while watching today’s five-star course unfold. “I think what made my day is the fact that these two [Price and Smith] along with Oliver Townend are riding first-time five-star horses and the horses are incredibly lucky to have three of the best riders in the world, but they were magnificent in how they coped with the young horses and helped them and encouraged them. For me, that sort of highlights why I do this. I am kind of expecting to get a bit of abuse about so many getting inside the time, but for me, it was perfect footing, perfect ground, some great riding, and I would much rather see ten get inside the time than five on the floor. I was kind of concerned about so many getting inside the time, but it was some great riding so I can live with it. And it puts some more pressure on these guys because there is more pressure going into the show jumping tomorrow as well, and I don’t have to worry about that!”

Four horses had jump penalties on course: Astier Nicholas’ ride Babylon de Gamma, Lisa Marie Ferguson’s horse Honor Me, Hayley Frielick’s ride Dunedin Black Watch, and overnight leader following dressage C’est La View 135 ridden by Woods Baughman. Liz Halliday-Sharp retired her ride Cooley Quicksilver at 24B at the Mars Sustainability Bay and Zach Bryant had a refusal at 7b with Direct Advance and later opted to save the horse for another day at fence 9. 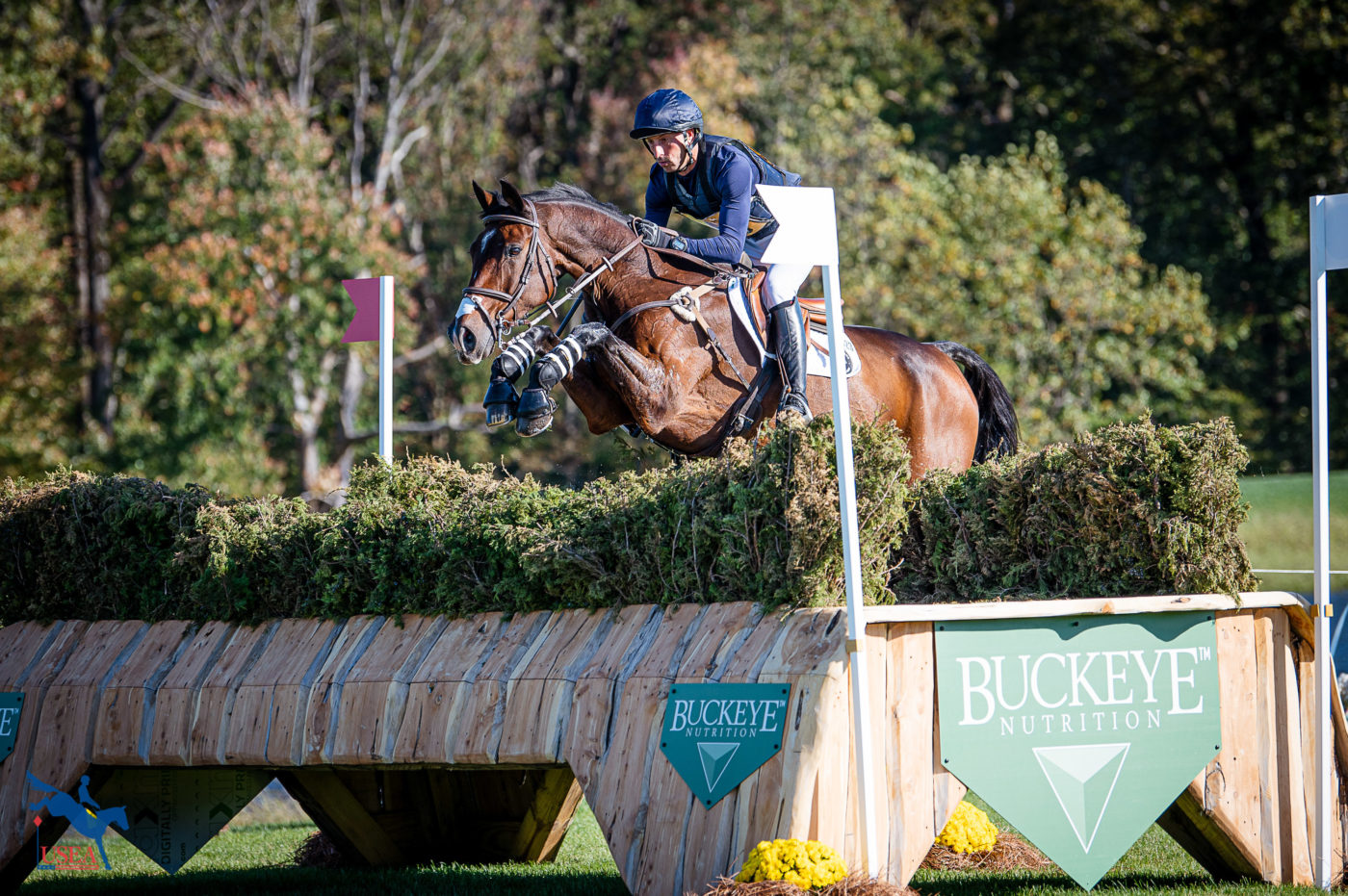 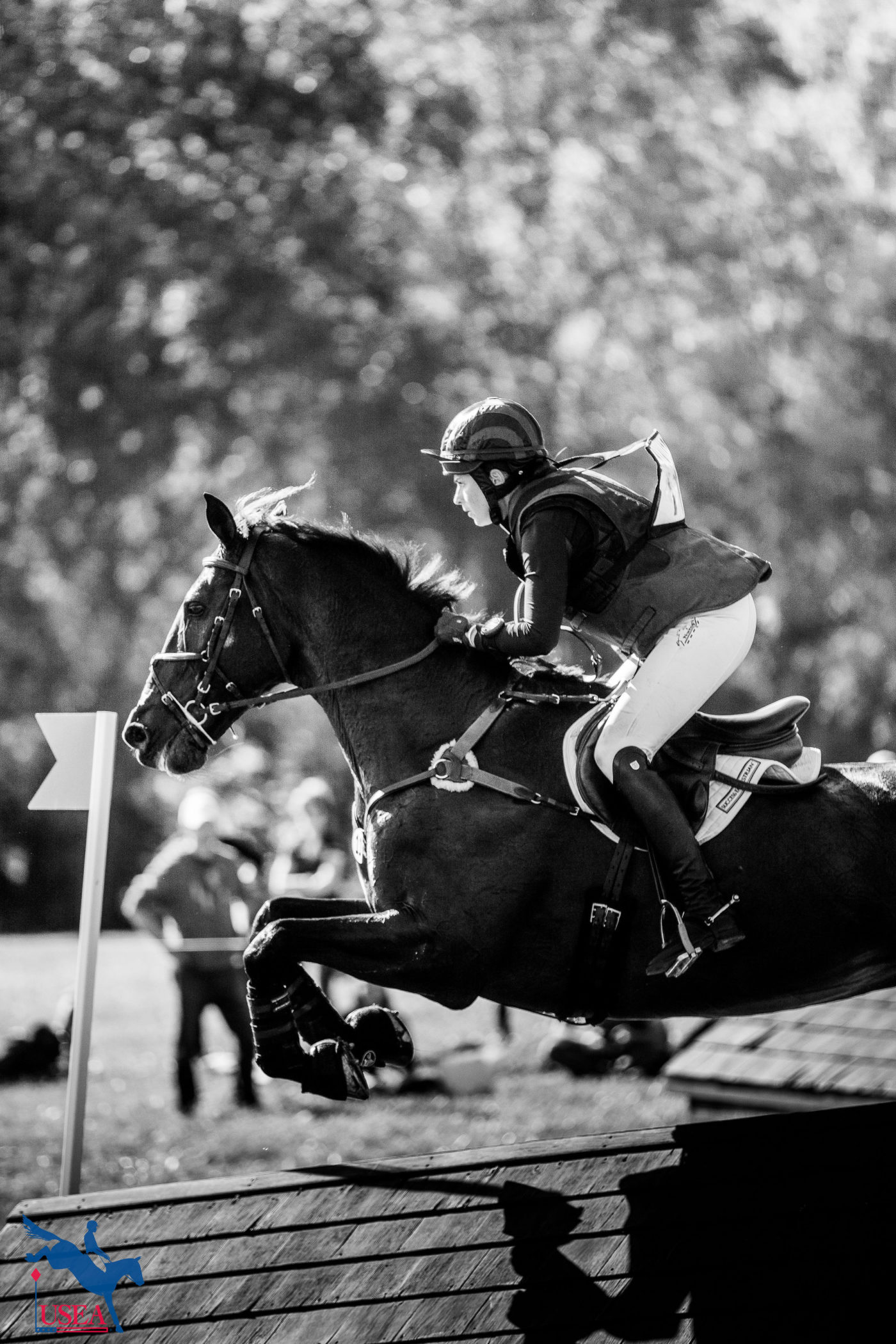 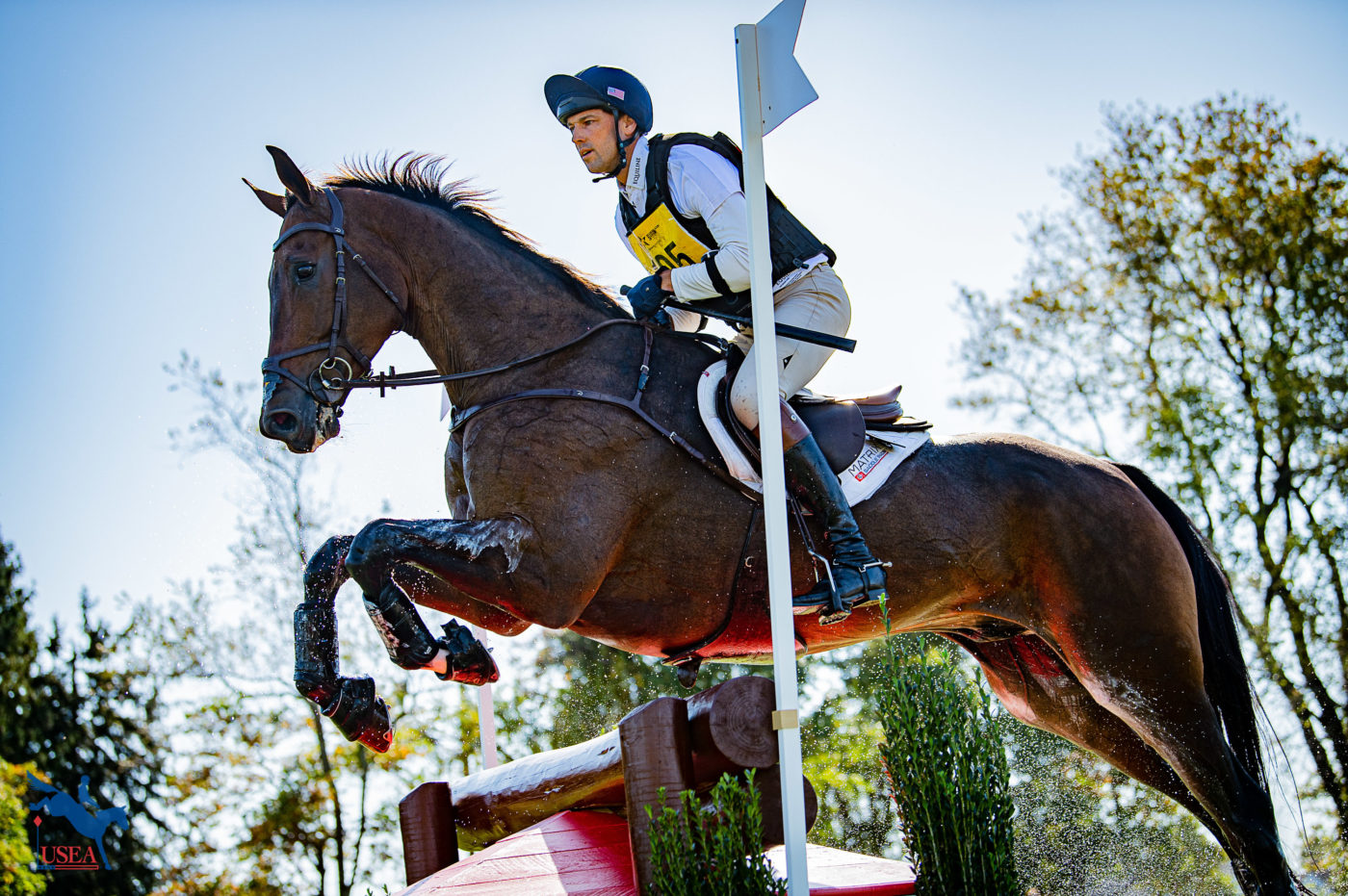 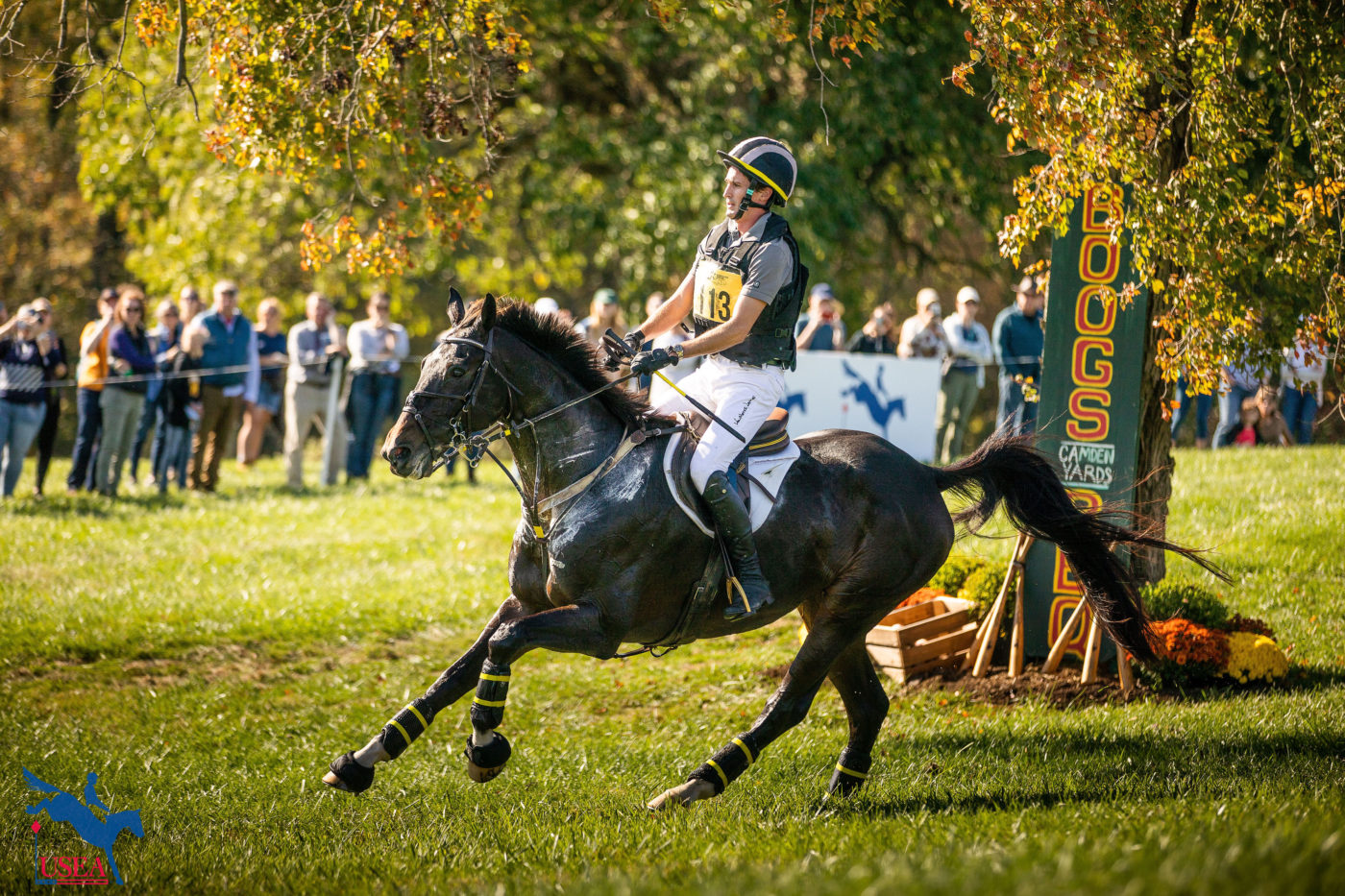 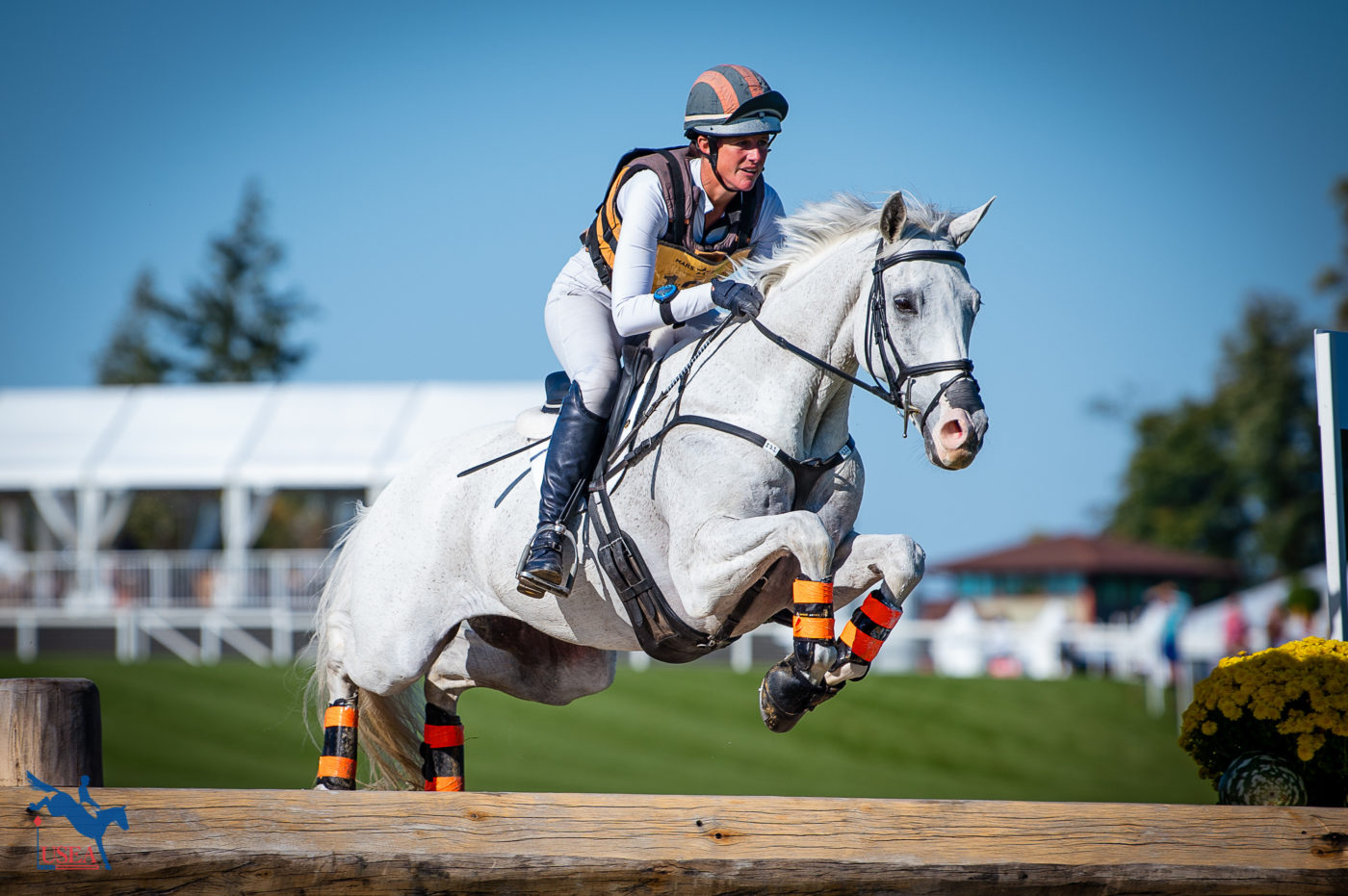 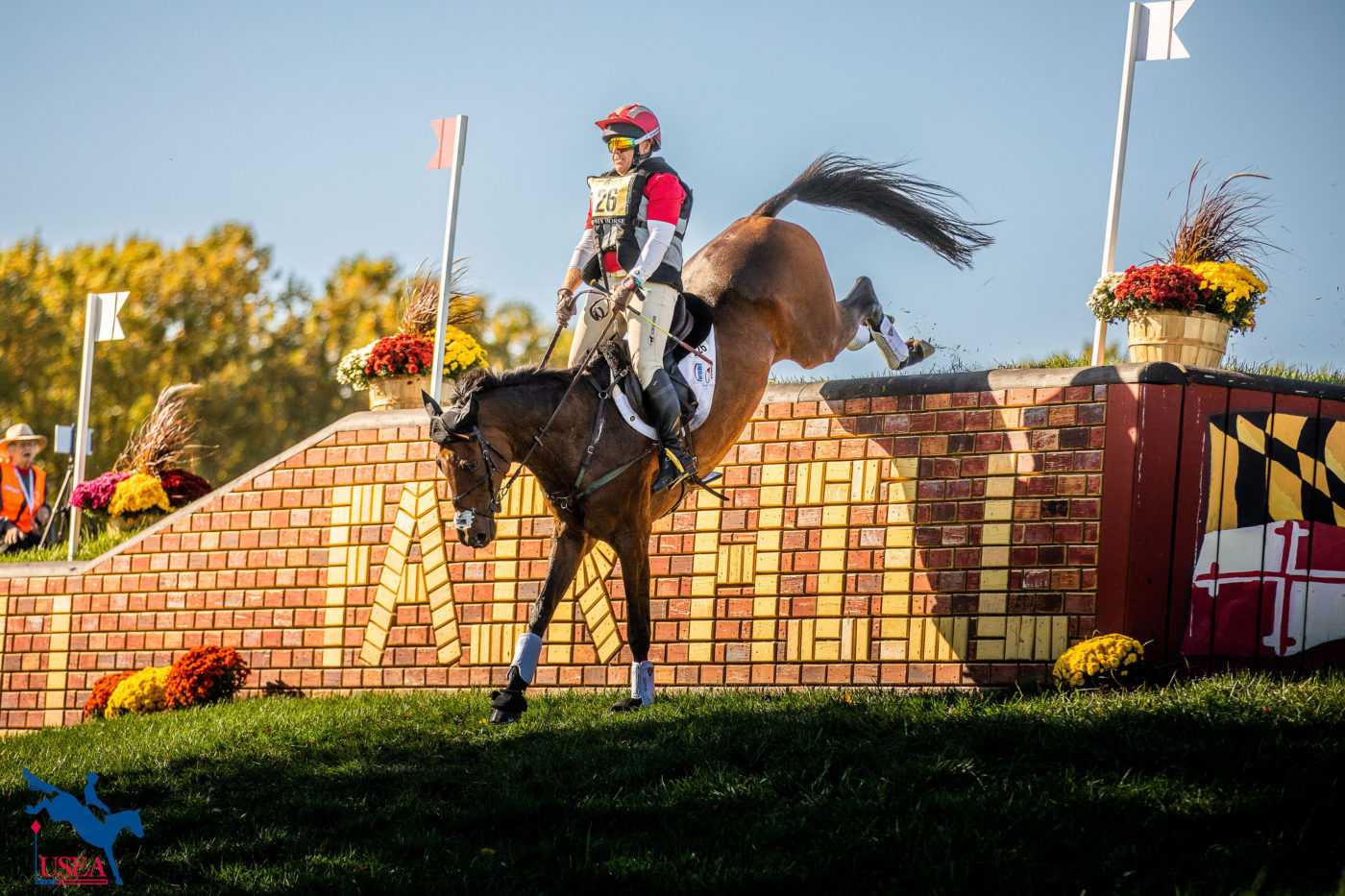 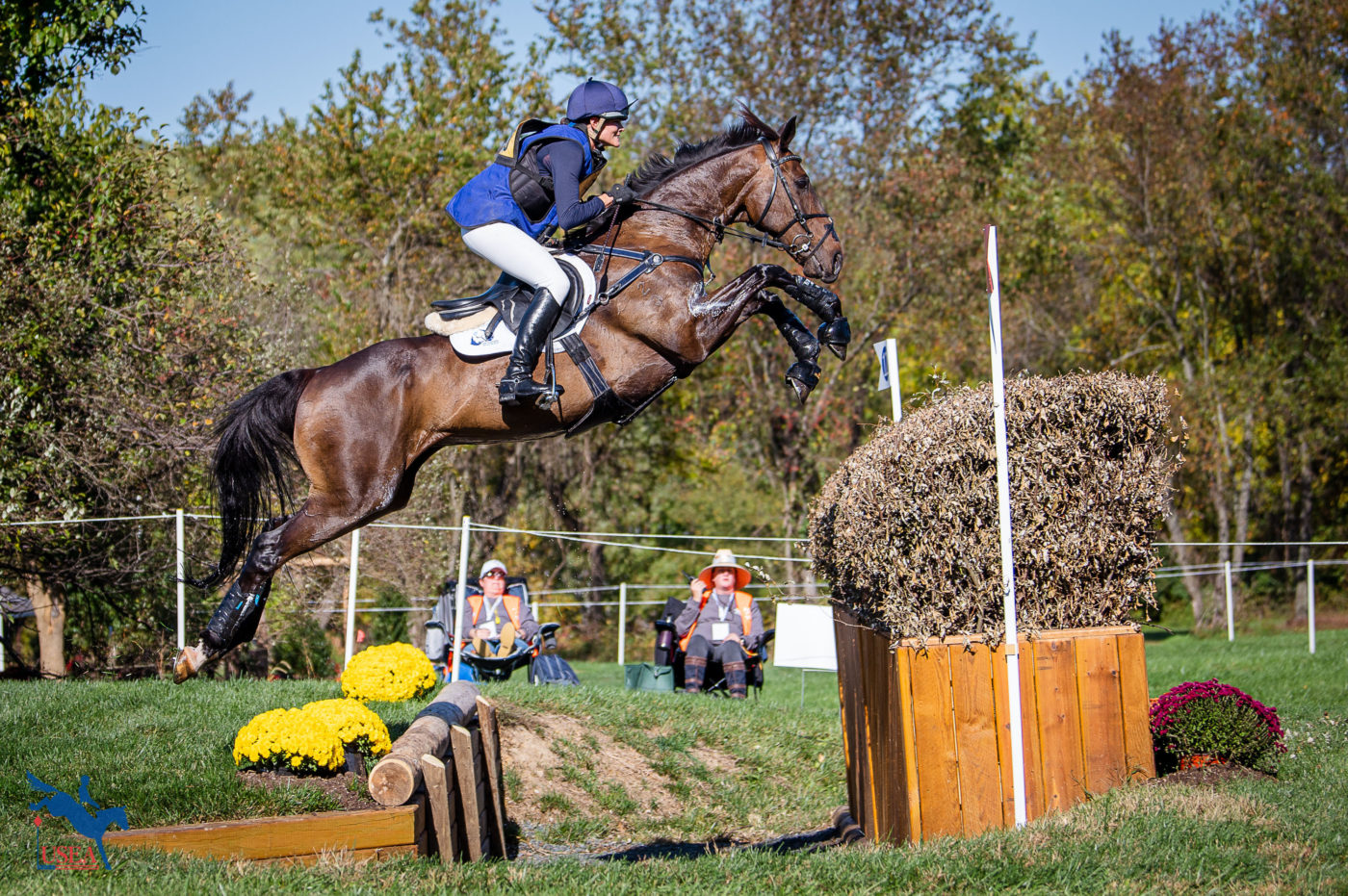 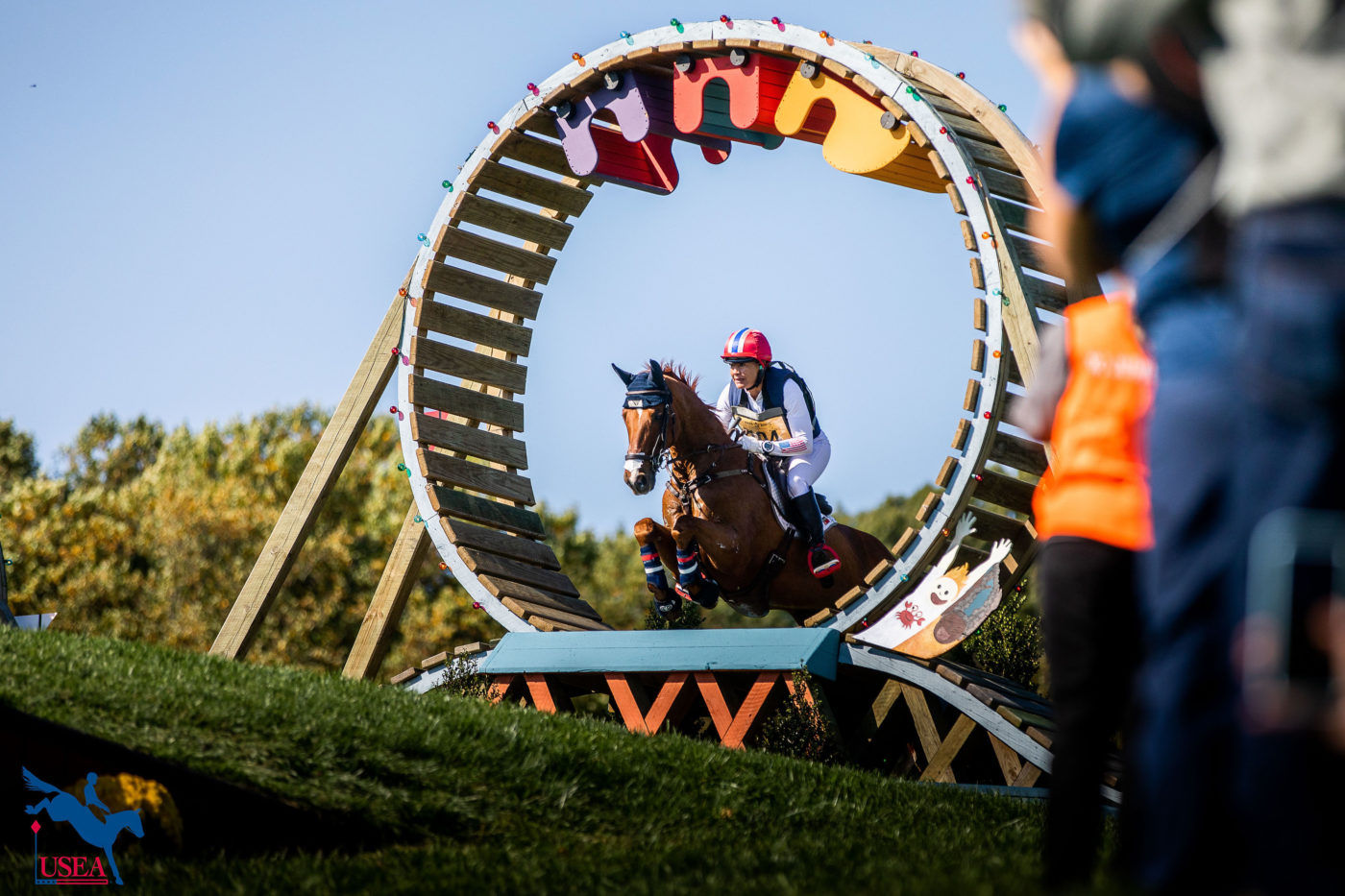 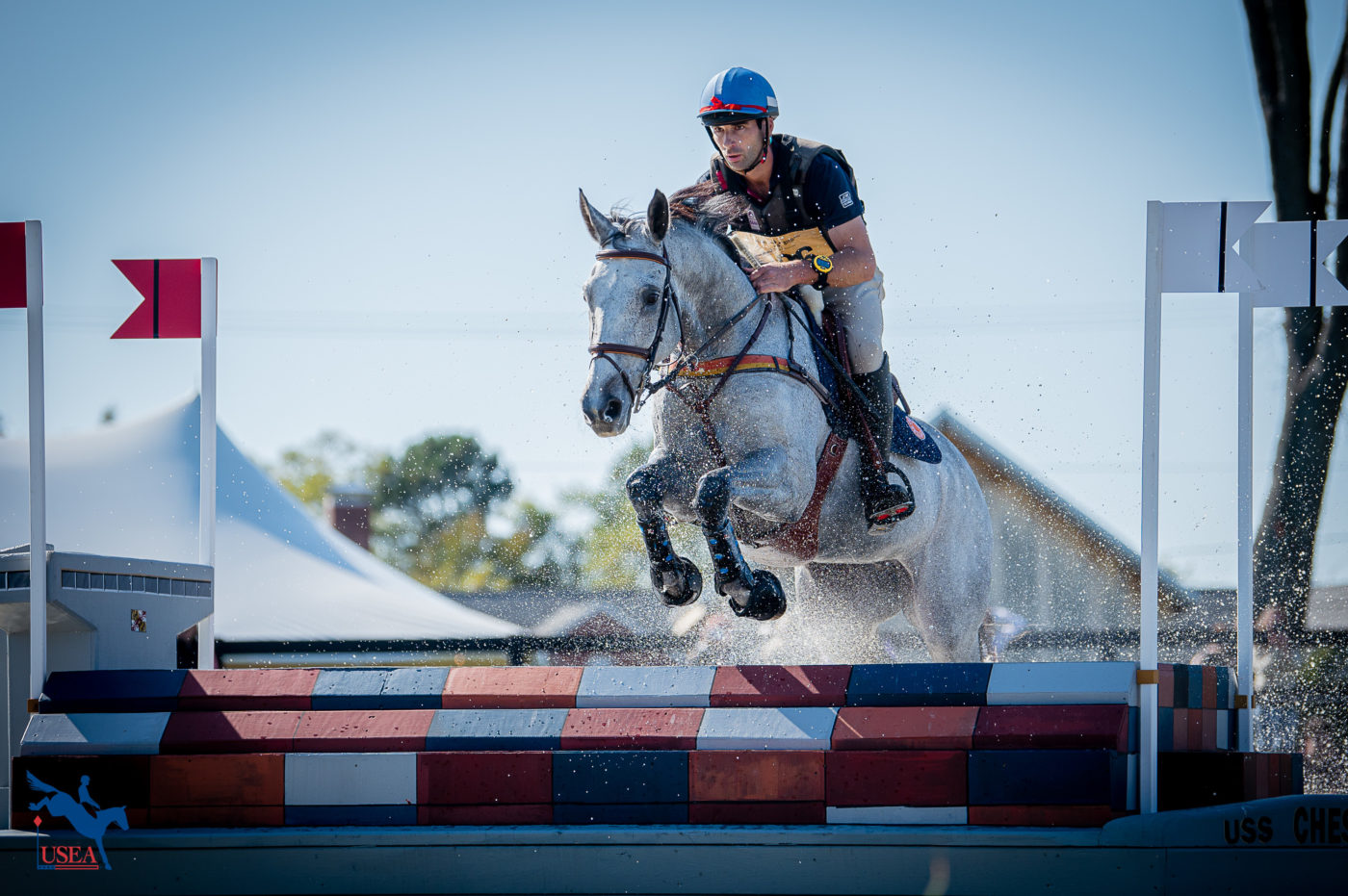 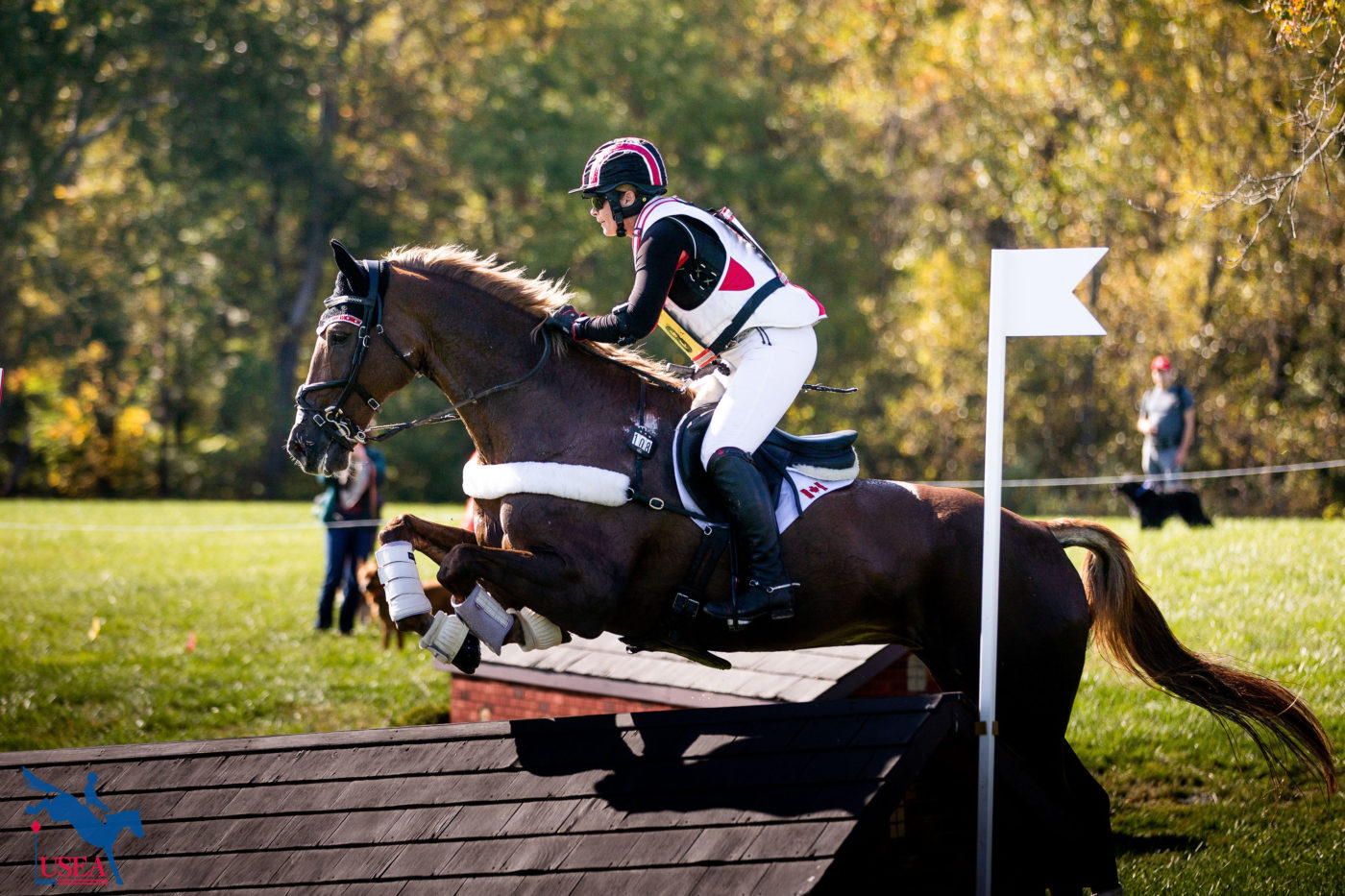