Twelve of the West Coast’s top young athletes descended upon the beautiful Aspen Farms in Yelm, Washington for the first of two USEA Emerging Athlete (EA21) Regional Clinics to be held on the west coast. As the sun rose over the pines and with misty Mt. Rainier in the background, USEA Instructor's Certification Program (ICP) Level IV Certified Instructor and co-founder of the EA21 clinic series, Rebecca Brown, sat down with the eager young riders for the opening discussion that kicked off the two-day clinic.

With the primary goal of the EA21 program aiming to create a pipeline for young athletes to graduate into the highest levels of the sport, Brown, a USDF Bronze and Silver Medallist and Advanced level eventer, started off the dressage day explaining the German Training Scale: rhythm, relaxation, connection, impulsion, straightness, and collection. Upon their initial meeting, Brown noted, “I was not expecting the group to be so young. Though, they seem to be far more talented and experienced than the average riders their age, having unique working student opportunities and some even competing at the two and three-star levels.” Brown, who grew up in an era where there was no pipeline or structured system to make it to the top of the sport, noted that the riders were chosen not only for their abilities in the saddle, but also their projected longevity in the sport and commitment to making the sport of eventing a career.

Following their initial discussion, riders mounted up in groups of three to showcase their skills and “...uncover weaknesses and holes in their training and in their horses training,” stated Brown. Each group was broken up based on each rider’s level, though all of the participants watched each lesson and learned from the ground as well as from the saddle. Madelyn Floyd, Lizzie Hoff, and Willa Laski were the first three to take to the covered arena.

Each group received vastly different instruction after Brown assessed each horse and rider pair and asked each the riders what they believed their horse’s weakness was. Impulsion was the focus of the first group, as Brown emphasized the importance of engaging the hind end and riding the horse from the back to the front. Brown stated that when training horses, instead of working difficult exercises and training techniques in the gait at which they are performed, to begin working on them at the walk. The first group proceeded to experiment with their horses on lightening their shoulders and creating engagement from the hind at the walk before working their way up through the canter by the end of their session.

Brown, who stated that her favorite horse in her own personal string is a five-year-old Thoroughbred she bought off of Facebook, stressed to the girls that they did not have to have the fanciest horse or the most experienced horse to make it in the sport. They had to control what they could control and implement their training and skills to be the best that they could be.

Abigail Cochran, Kayla Dumler, and Ashley Widmer were the next group to follow. With a collectively higher level of experience than the first group, Brown was tougher with her questions and implemented slightly more technical exercises for the riders to follow including haunches in and out in both the trot and canter. Impressed by the group's riding capabilities, Brown shook things up and instructed the riders to dismount and switch horses. “If you are in this for long enough” stated Brown, “you will have to know how to ride each and every type of horse that we see here.”

Brown, who runs a successful training and sales business out of Texas, stressed the importance of self-sufficiency stating that she only has two “real” lessons per year, and growing up she “never had a private lesson. I only ever had group lessons.” While working with each group and each student, she expected the other riders to improve and make corrections on their own so that when she came back to them, they had implemented a technique and retained a skill Brown had showed them.

Lindsay Ann Essex, Kendal Smith, and Kaylee Petticord were the third group to take to the ring. Halfway through the lesson, Brown requested that a volunteer from the side bring her two schooling whips. In an effort to help adjust Petticord and Essex’s positions, she placed the whips behind their back to help open up their chests and set their shoulders back. In doing so, both rider’s horses responded to their deeper seat and stronger, more effective contact by lightning in the shoulders and sitting back on their hind end.

Harper Padgett, Maeson Messmer, and Reese Blinks were the final three to ride for the day. Each of their horses was vastly different from the next,with a long-backed, hot warmblood, a petite, short backed horse, and a quiet and narrow warmblood. Noting that each of their rides could not be more opposite, Brown challenged the riders to swap horses while working their haunches in and out exercises.

Overall, Brown pulled each rider out of their comfort zone and challenged them to confront a weakness in either their horses' training or in their own training, aiding them in solving it for themselves. Throughout the day Brown was buzzing around the grounds giving advice to all of the riders on how to “make it” in the sport, taking every possible opportunity to pass on her knowledge to the eager young riders.

The clinic will resume tomorrow, August 16 at 7:30am PST for the second and final day of instruction with their showjumping portion. The remaining EA21 Regional Clinics are scheduled as follows: 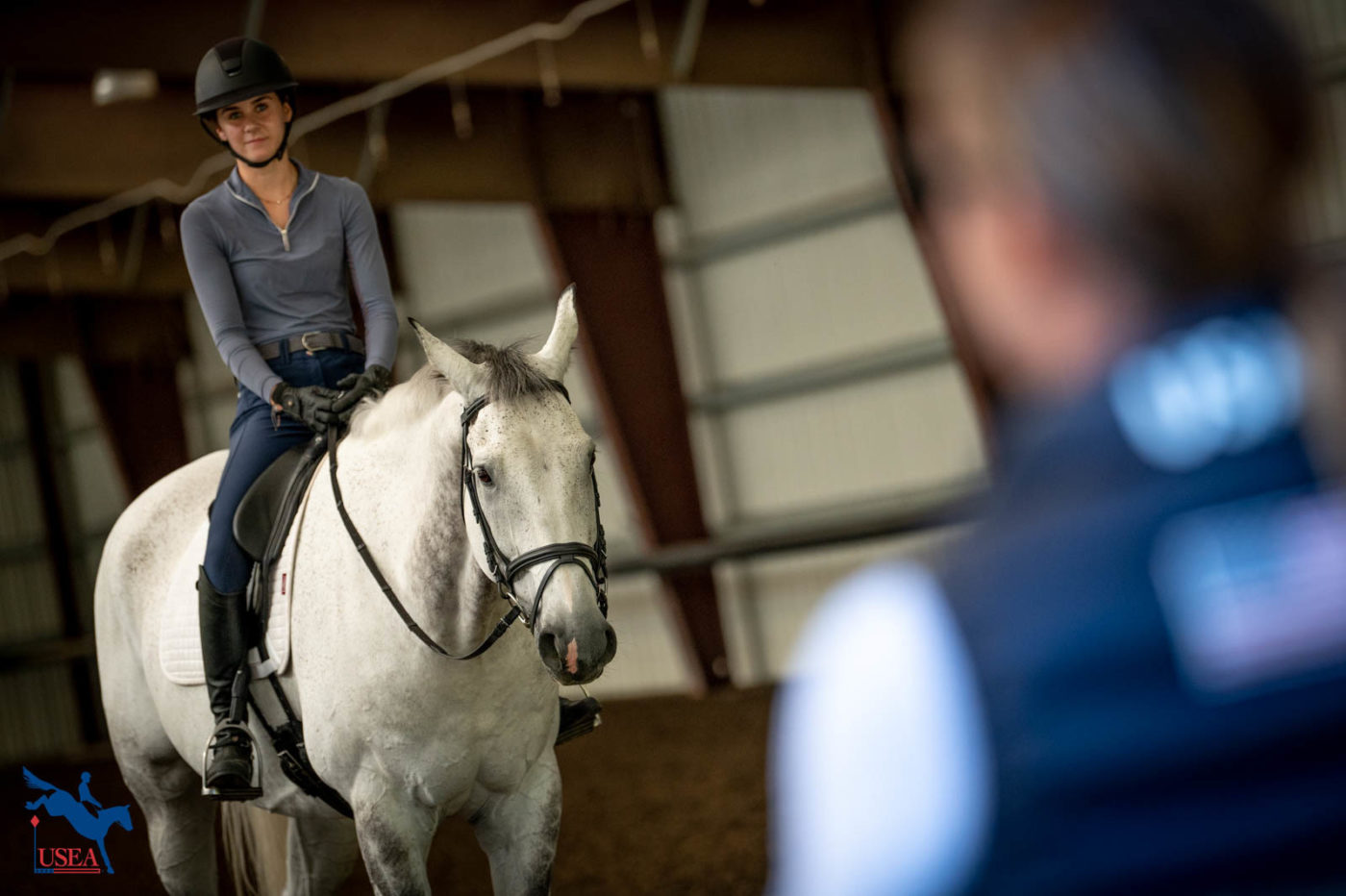 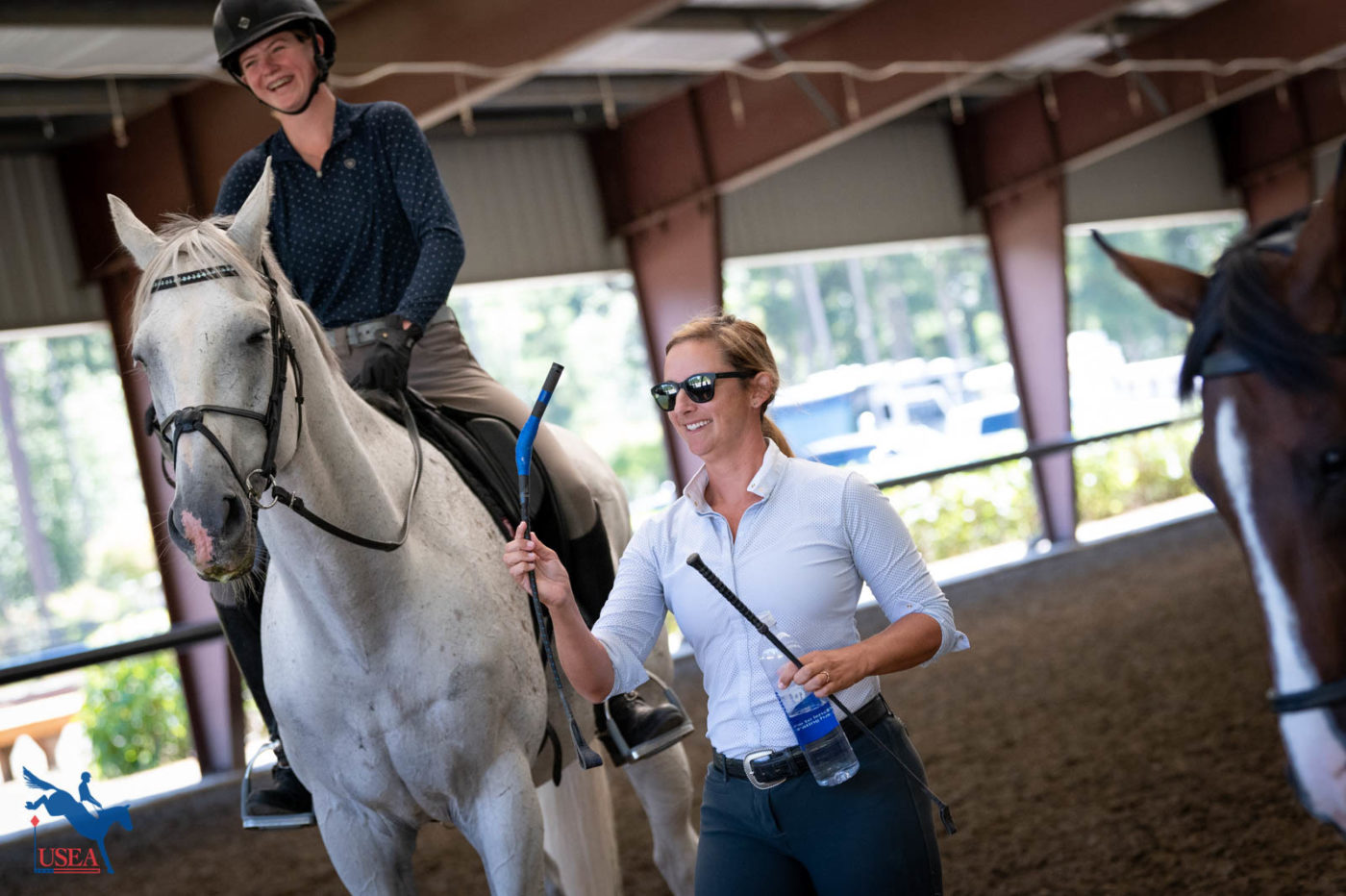 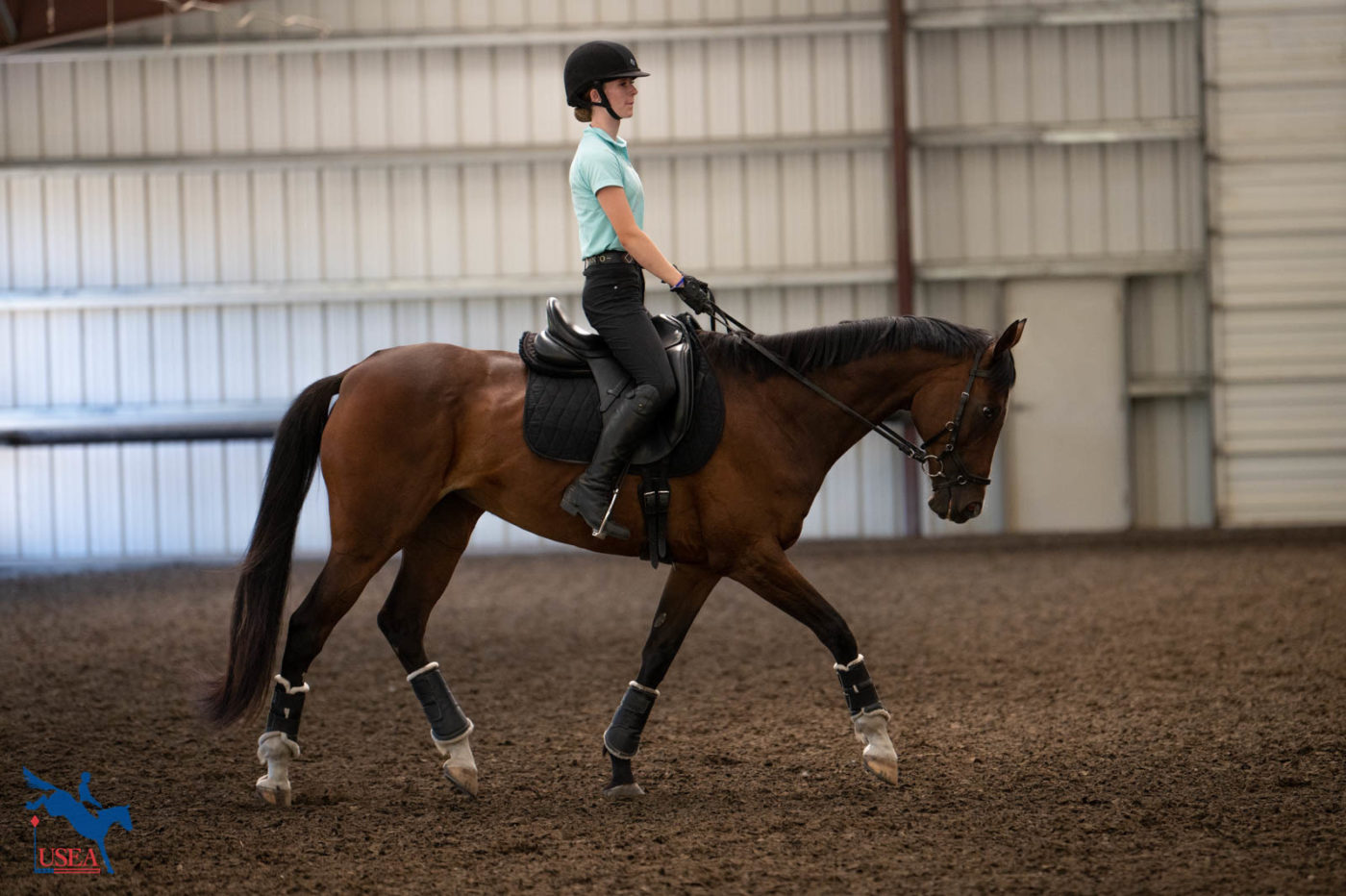 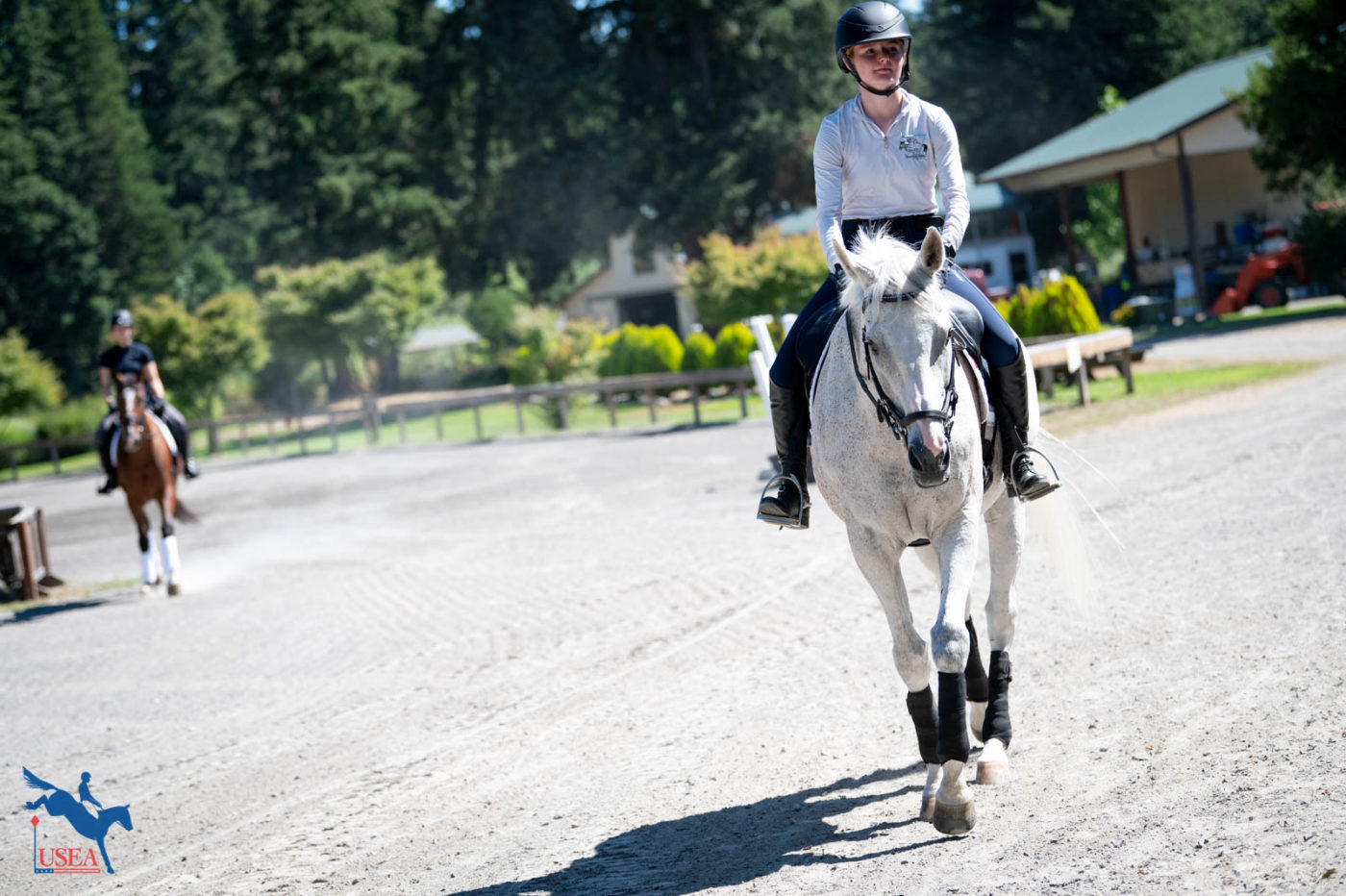 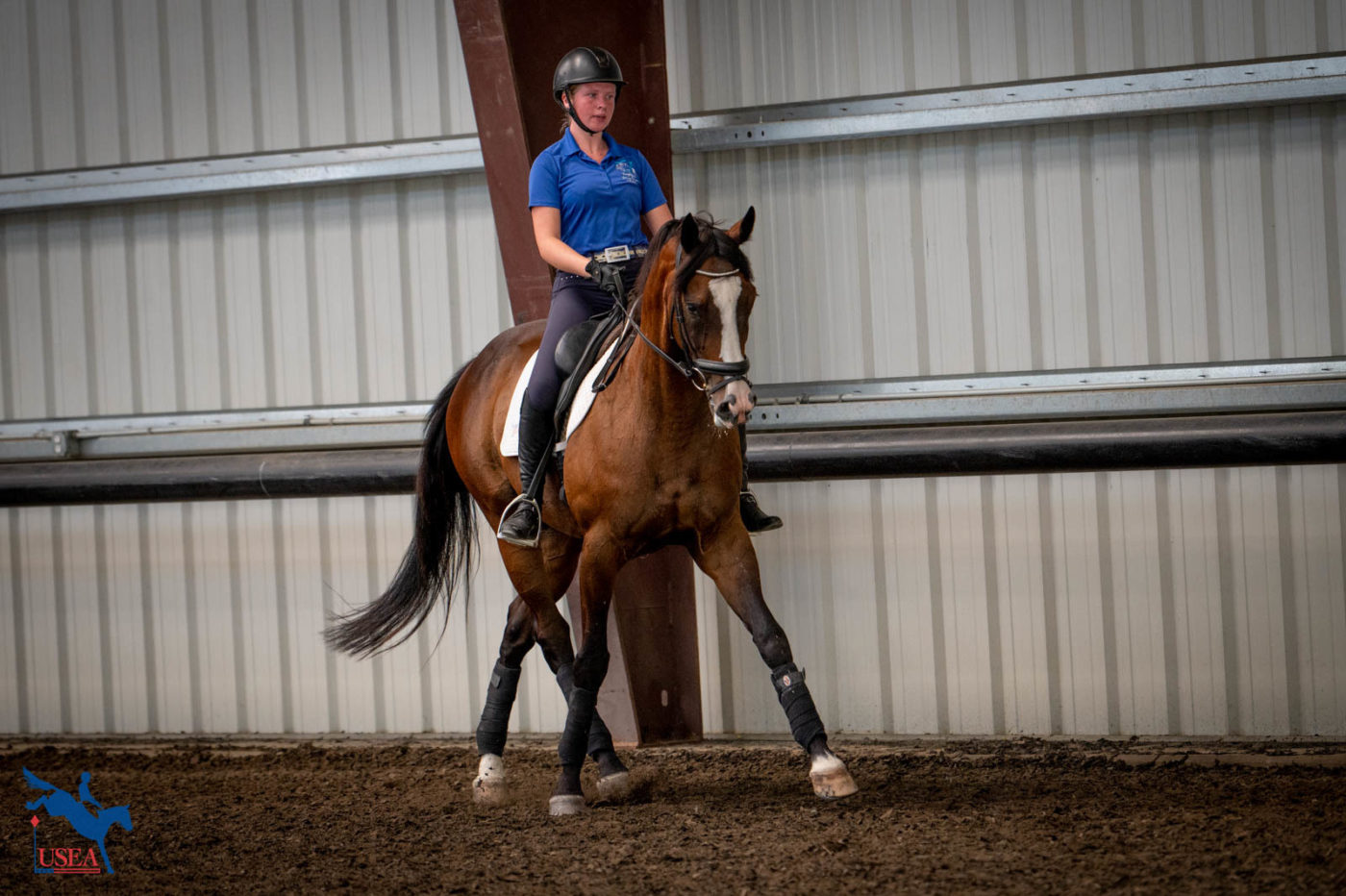 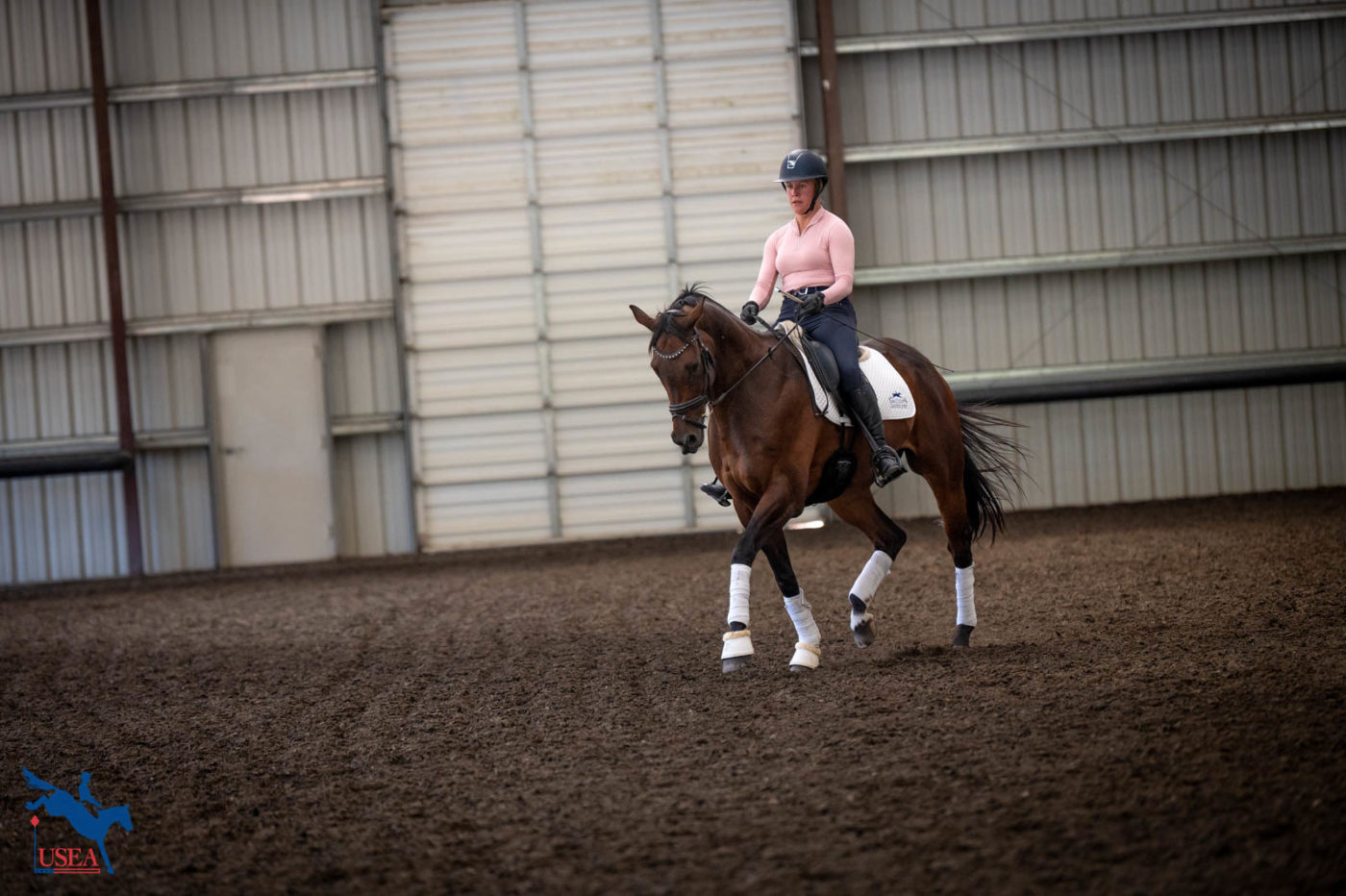 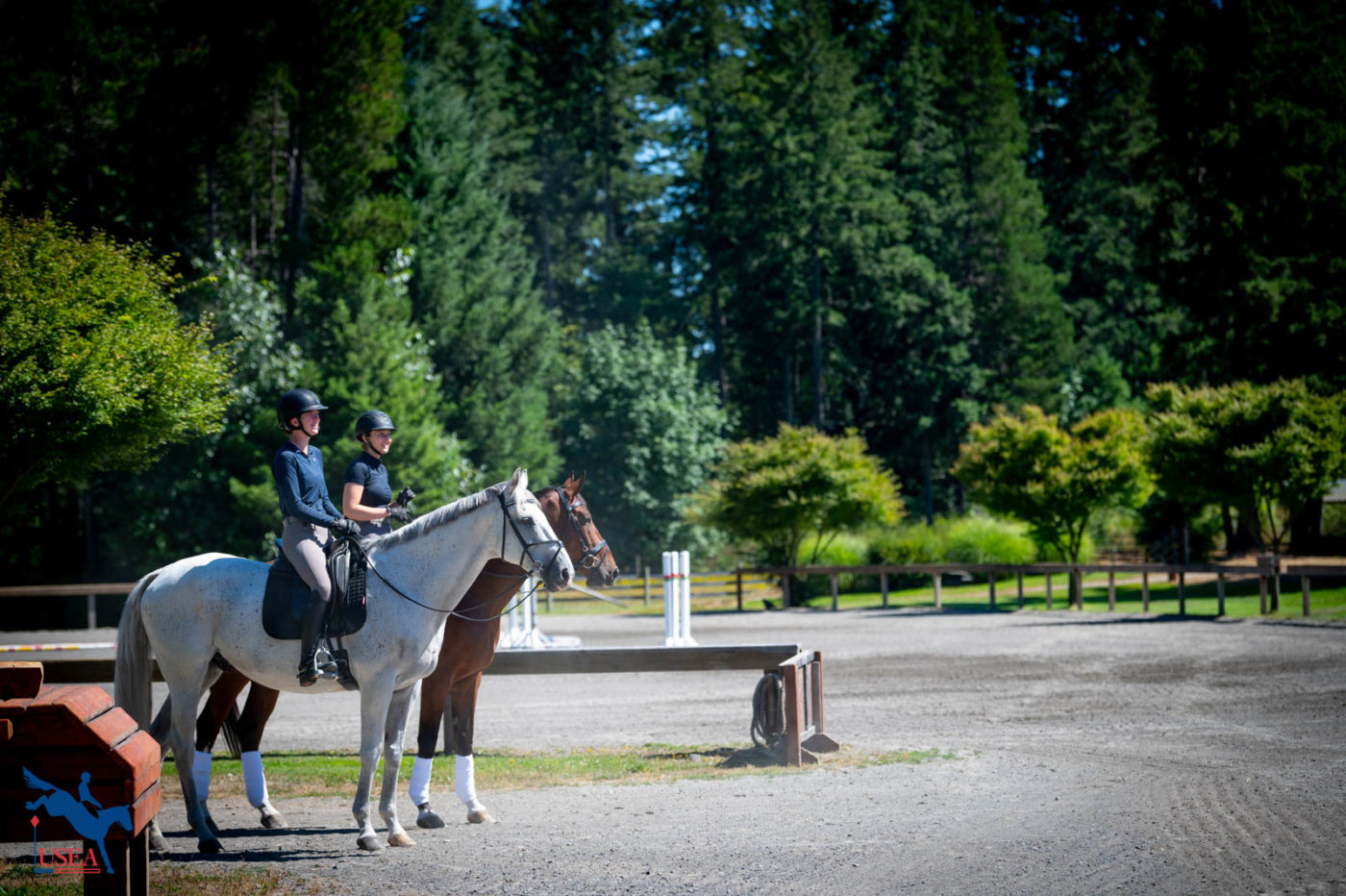 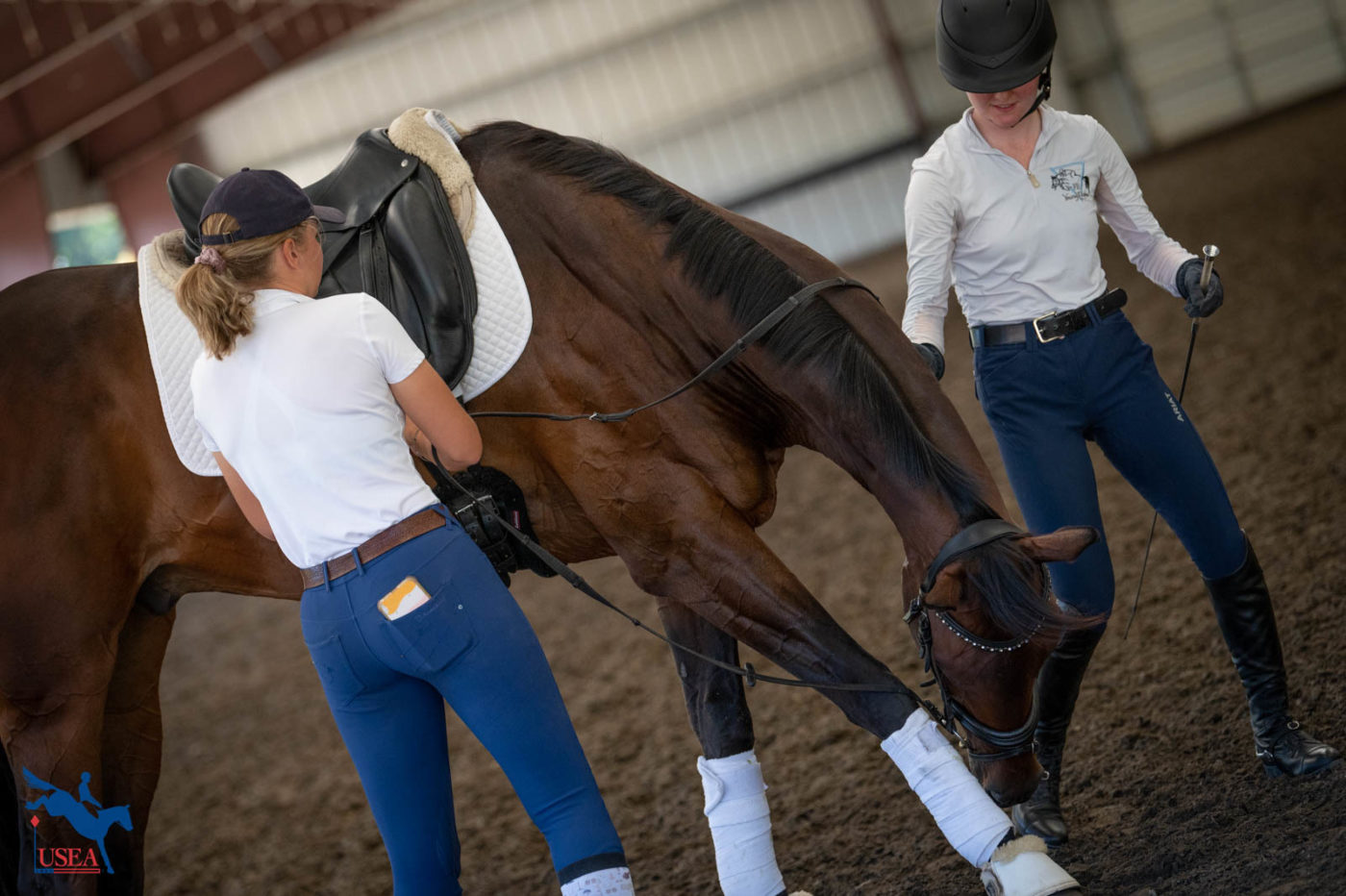