They saved the best for last today in the CCI4*-S at the MARS Great Meadow International in The Plains, Virginia. Lynn Symansky was the 36th rider down the centerline aboard Mary Ann Ghadban’s Under Suspection this afternoon in the Fleming Farm Arena and she laid down an impressive 25.0 to take the lead from Lauren Kieffer and D.A. Duras, who held the lead for most of the day.

“It was probably the best test I have ever had on her,” Symansky said of her ride aboard the 15-year-old Holsteiner mare (Contender x Naomagic I). “The first time I came [to Great Meadow International] she was still Hannah Sue Burnett’s ride and I was just popping on to do a little test ride – I had no idea how to ride the horse and she was really hot.”

Symansky explained that she’s been working with pure dressage trainer Jacquie Brooks and that has been a factor in her flatwork with “Pippy.” “I have been lucky,” she said. “I ran into Jacquie Brooks in Lima and we talked about getting her to Virginia to do a session or two, so Lauren [Kieffer] and I have been doing some dancing lessons. It is a fresh pair of eyes which was a big contributor. . . She has an approach that is universal for each horse, but she tweaks it depending on how you have to ride each test. By this point, you know these horses well and you are trying to pick up things from each person you are working with which helps since she knows us well and knows the horses well.”

Lauren Kieffer aboard Debbie Adams and Jacqueline Mars’s 11-year-old KWPN gelding (Numero Uno x Medoc) went early in the order of go this morning, laying down a 26.0 that no one could touch for the majority of the day. That score will be good enough for second place overnight.

“He had a year off last year which honestly in hindsight was probably the best thing that has ever happened to him,” Kieffer explained. “He’s come back really well. He is a different ride for me – I’ve always had blood horses in the past and it has taken me a little while to figure out how to ride a warmblood, but he was great in there.”

“He has gotten to where I can ride him really forward and really attack the movements and he has great gaits and good baseline,” she continued. “He was produced by Kelly Prather and Debbie Adams who still owns part of him with her husband Tony. I was fortunate enough that Mrs. Mars stepped up and bought the majority of him. He is still pretty young – he hasn’t quite turned 11 and I am pretty excited about him.”

Doug Payne and Vandiver entered the arena directly after Symansky and Under Suspection but couldn’t quite catch them. Still, their score of 27.5 puts Payne and the 15-year-old Trakehner gelding (Windfall II x Visions of Grandeur) in third place for tomorrow’s show jumping competition.

“It is a rewarding process because I think we are finally getting to a place where we can further develop and tweak and approach what his potential would be,” Payne reflected. “For some time there I felt like I was just patching it together rather than being able to actively ride it. Over the past year he has continued to improve and we are finally at a place that it is quite good. He is sensitive for sure, but I have some tools that can deal with it.”

Looking to tomorrow’s show jumping, Payne’s plan is simple: “I plan to leave all the poles up. Quinn is quite good. He is a trier of all triers.”

“Duras is actually really fun to show jump,” Kieffer said. “I have been practicing and doing some mini prixs on him so hopefully he will be good here tomorrow and if he’s not then I probably did something wrong.”

“To have this much atmosphere and to show jump later in the evening - it gets us in that more pressure situation where you have people around and the horses come down from the warm-up and a lot of them do change so I think it is good practice for us too,” Symansky said. “My horse didn’t have the spring she we are hoping for so I am lighter on practice at this level with her, but the horse knows her job and I know her more her now so it is just doing what you have been doing at home and hoping you produce a clear round."

“This venue is so great to have around the corner and they have done so much work on the footing – we have had a proper drought here in Virginia and with the irrigation and everything the footing would have still been good to run on even without the rain we just got,” Kieffer added.

Symansky is also leading the CCI2*-S aboard Global Cassero 3, known around the barn as “Jerry.” Owned by Katherine Coleman, the 8-year-old Hanoverian scored an impressive 21.4 to lead the CCI2*-S by nearly three points.

“The last event I did with him was Red Hills – he had a little bit of time off to fix a breathing issue and he has come back and is feeling even better, so this will be his first run back,” Symansky said. “[Katherine] saw him and thought he was just a really lovely horse and she knew that I needed some more horses coming up and thought it would be a good match.”

Symansky is taking this opportunity to prep Jerry for a move up to the Intermediate/three-star level this fall. “It is an opportunity to get some people together to buy him,” she stated. “To be honest, it was not an amazing test for him – there is so much more quality in there. He is such a looker. The horse is just stunning, it is like when you walk into a room with a beautiful man on your arm, like my husband. He just turns heads every day.”

Lauren Kieffer and Jacqueline Mars’s Get Gaudi, an 8-year-old Dutch Warmblood mare (Alicante HBC x Second Floor) were the overnight leaders in the CCI2*-S on a score of 24.1, which they will carry forward to show jumping. Will Coleman and the 7-year-old Holsteiner gelding Chin Tonic HS (Chin Champ x Wildera), owned by Hyperion Stud, round out the top three on a score of 25.

Show jumping competition for all three divisions takes place tomorrow beginning at 8:00 a.m. and continuing all day. The CCI2*-S will also do cross-country starting at 1:00 p.m. 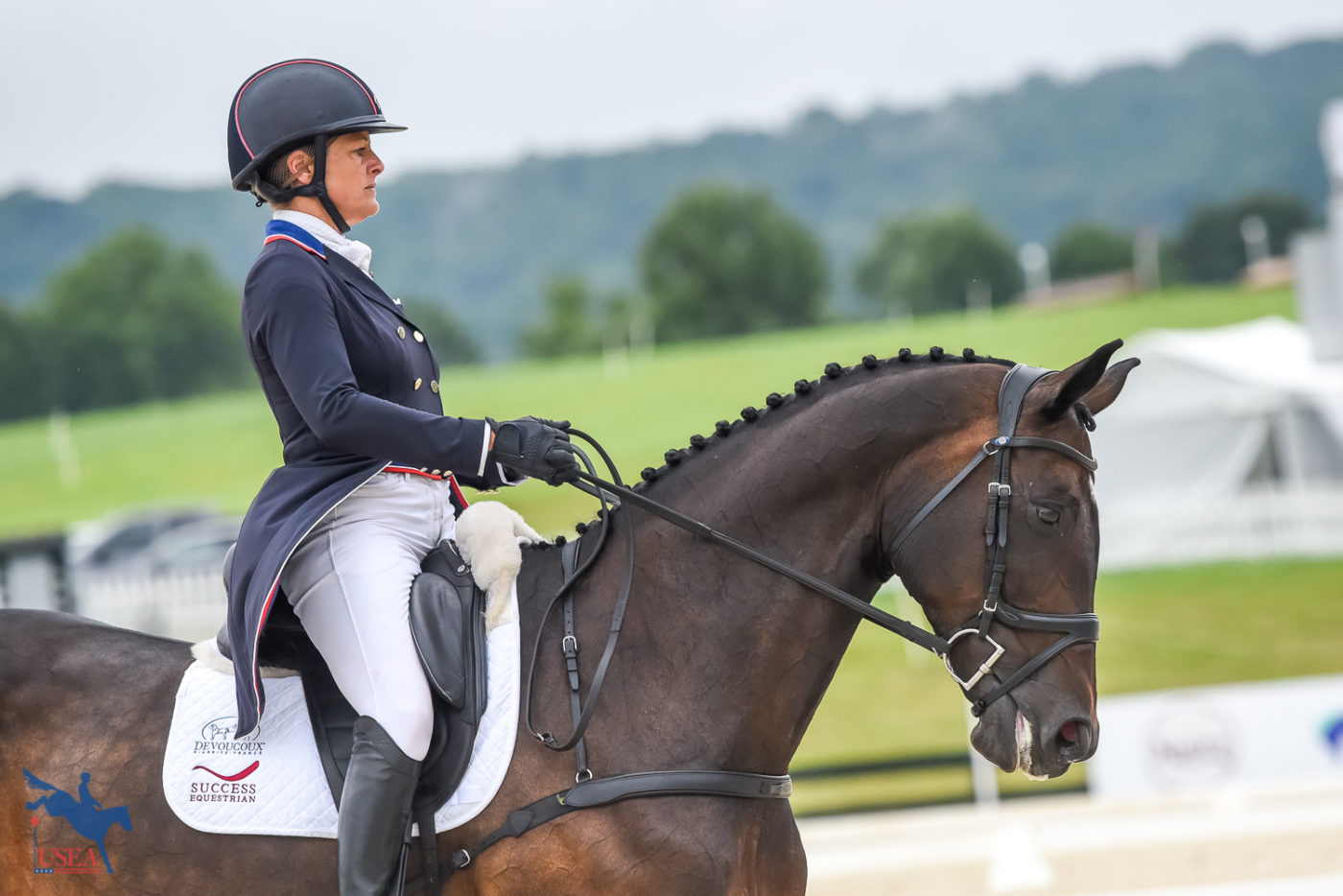 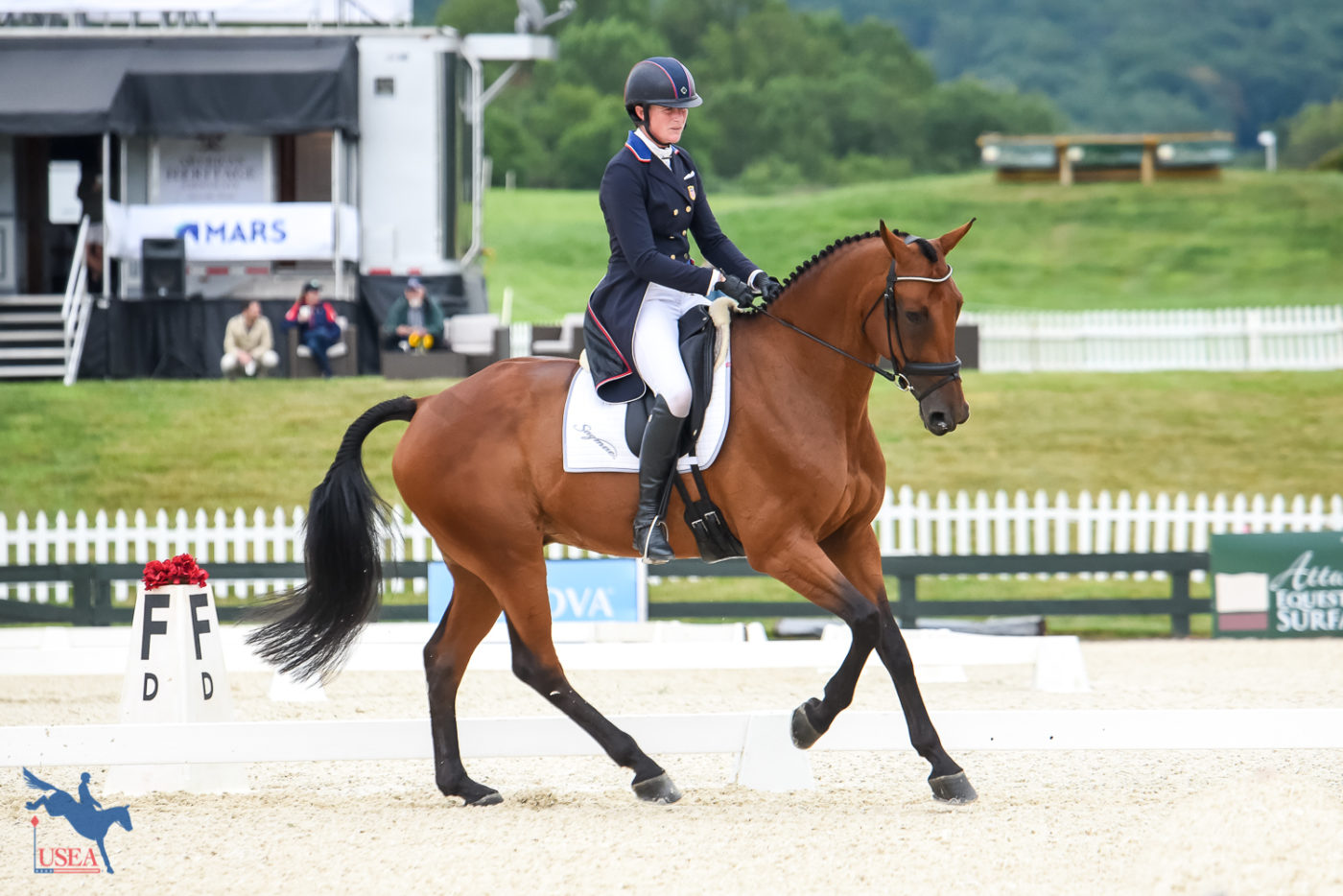 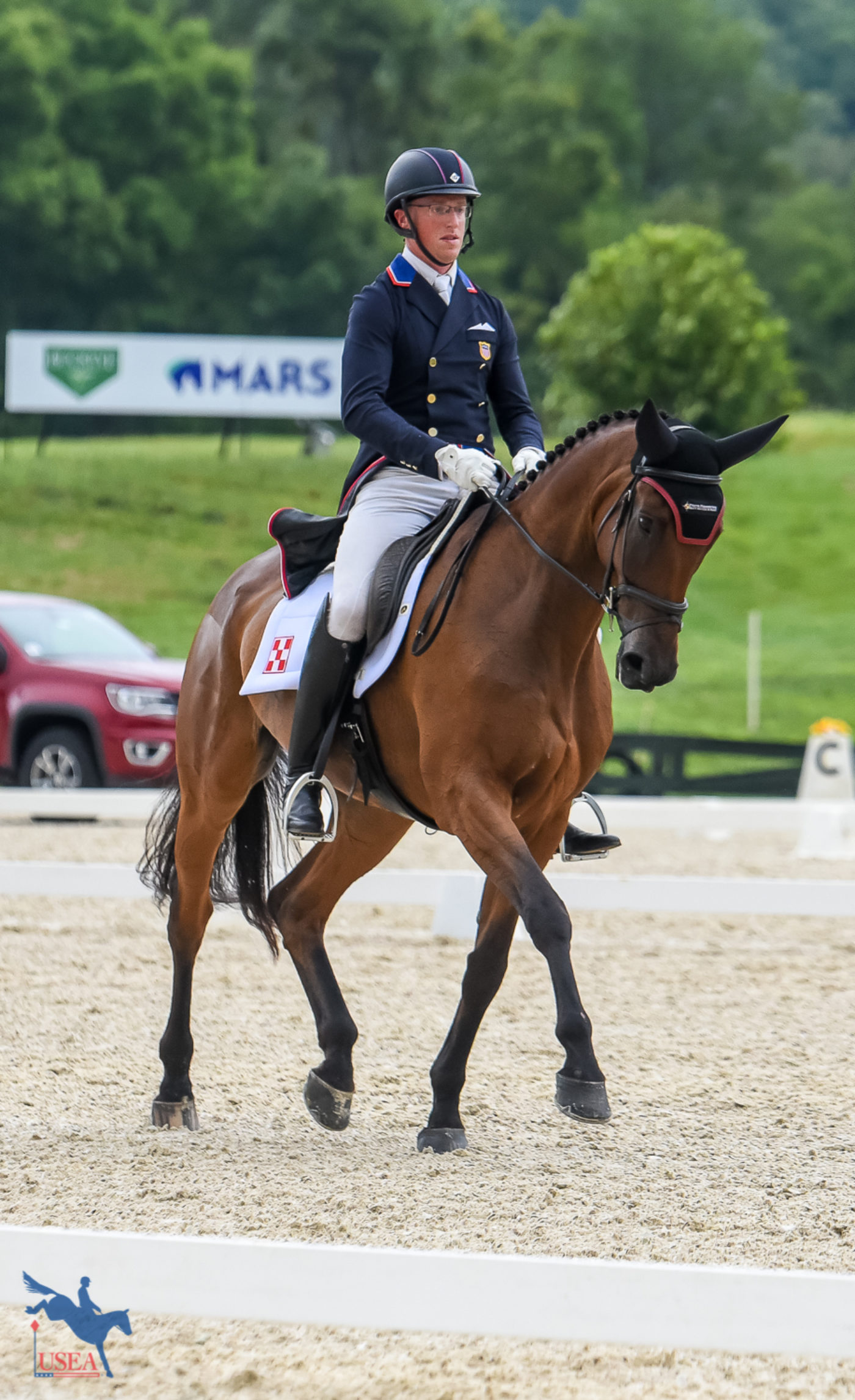 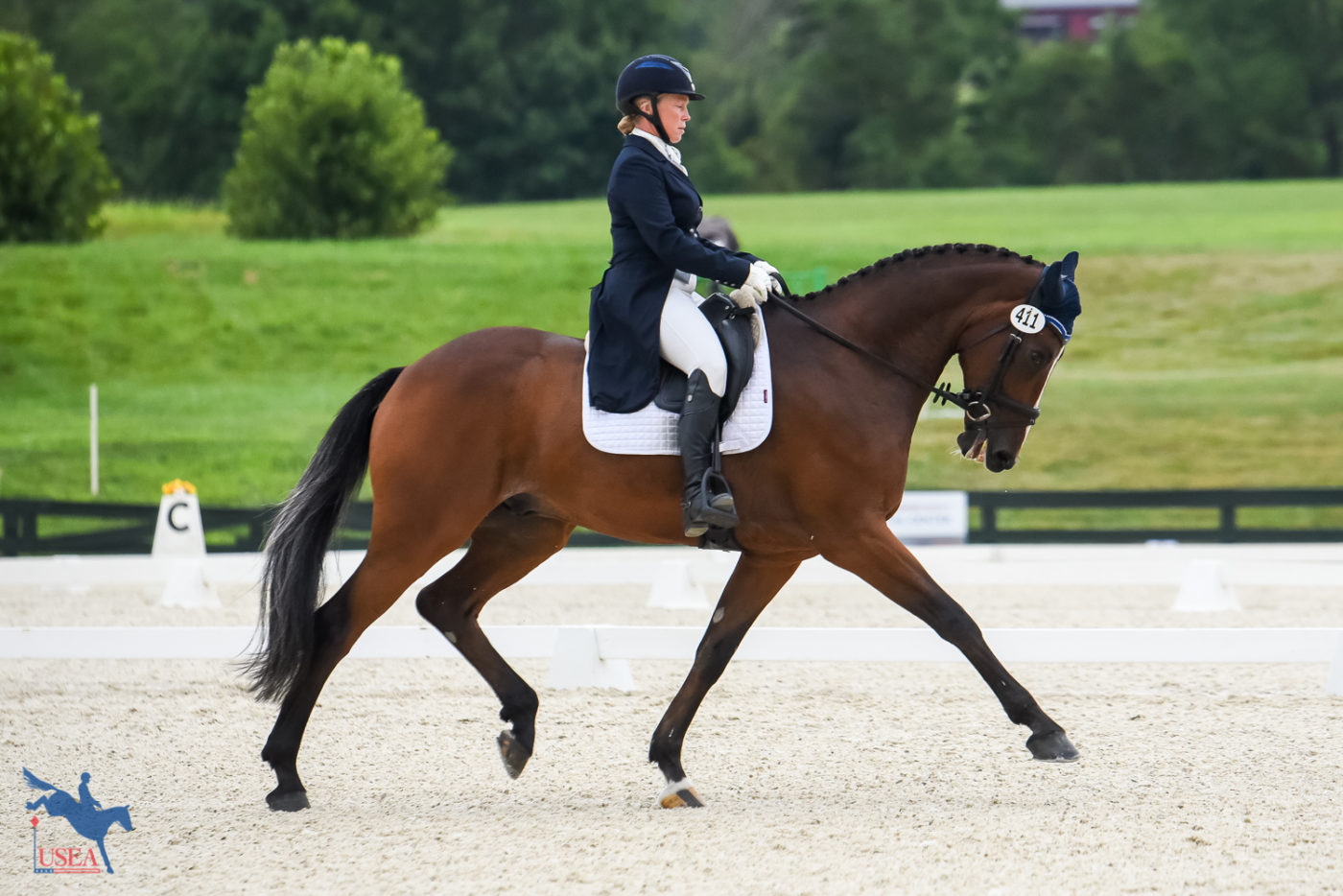 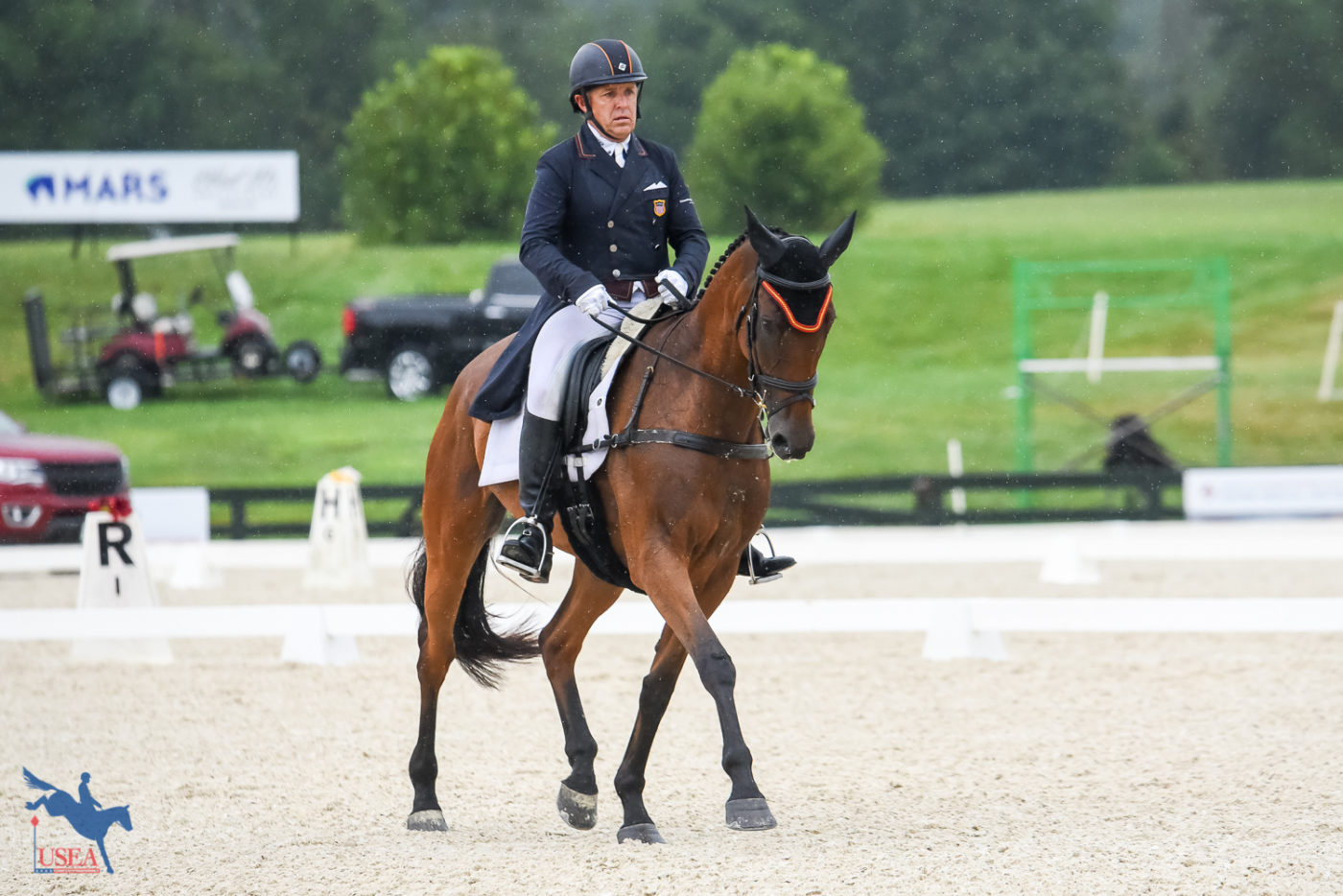 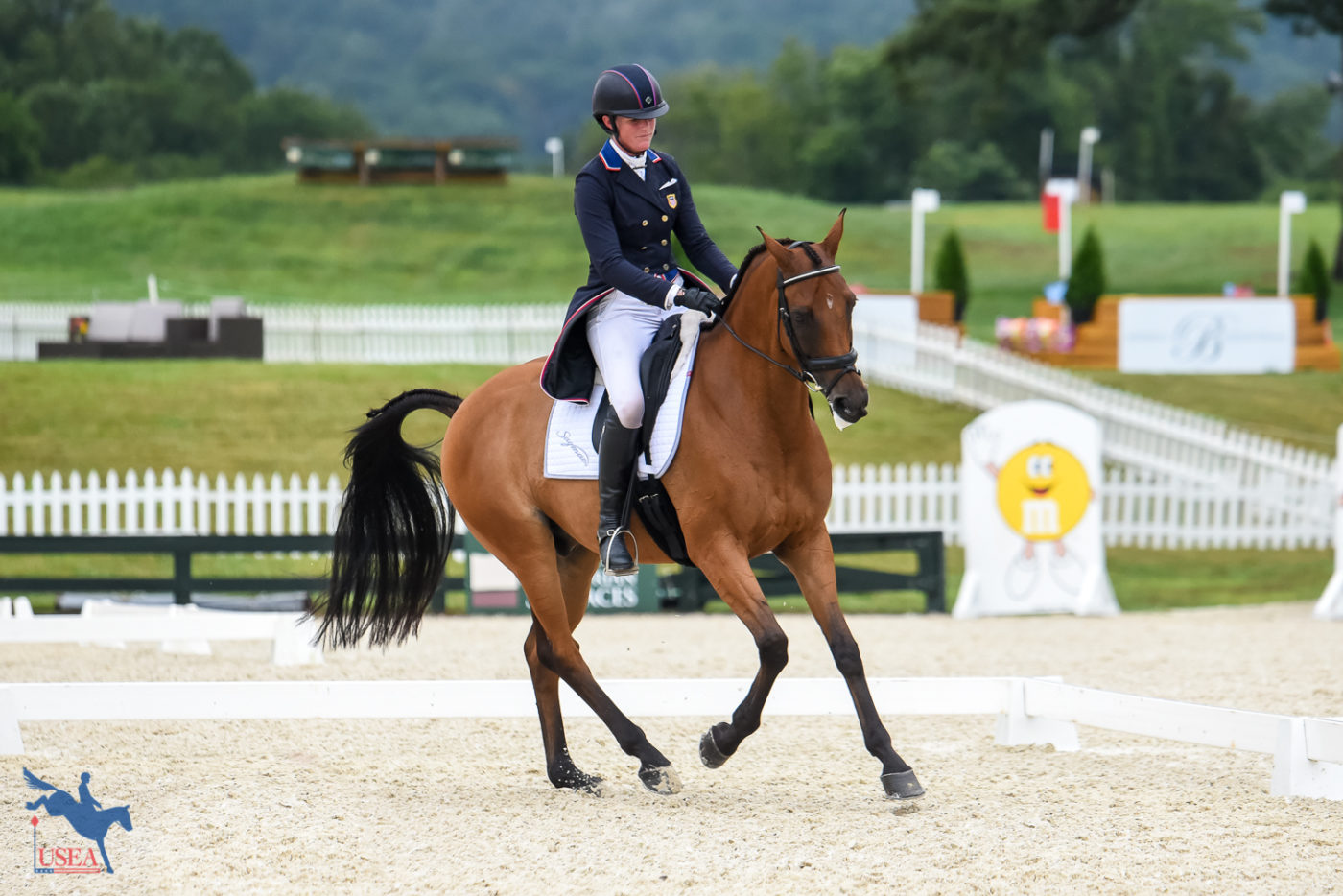 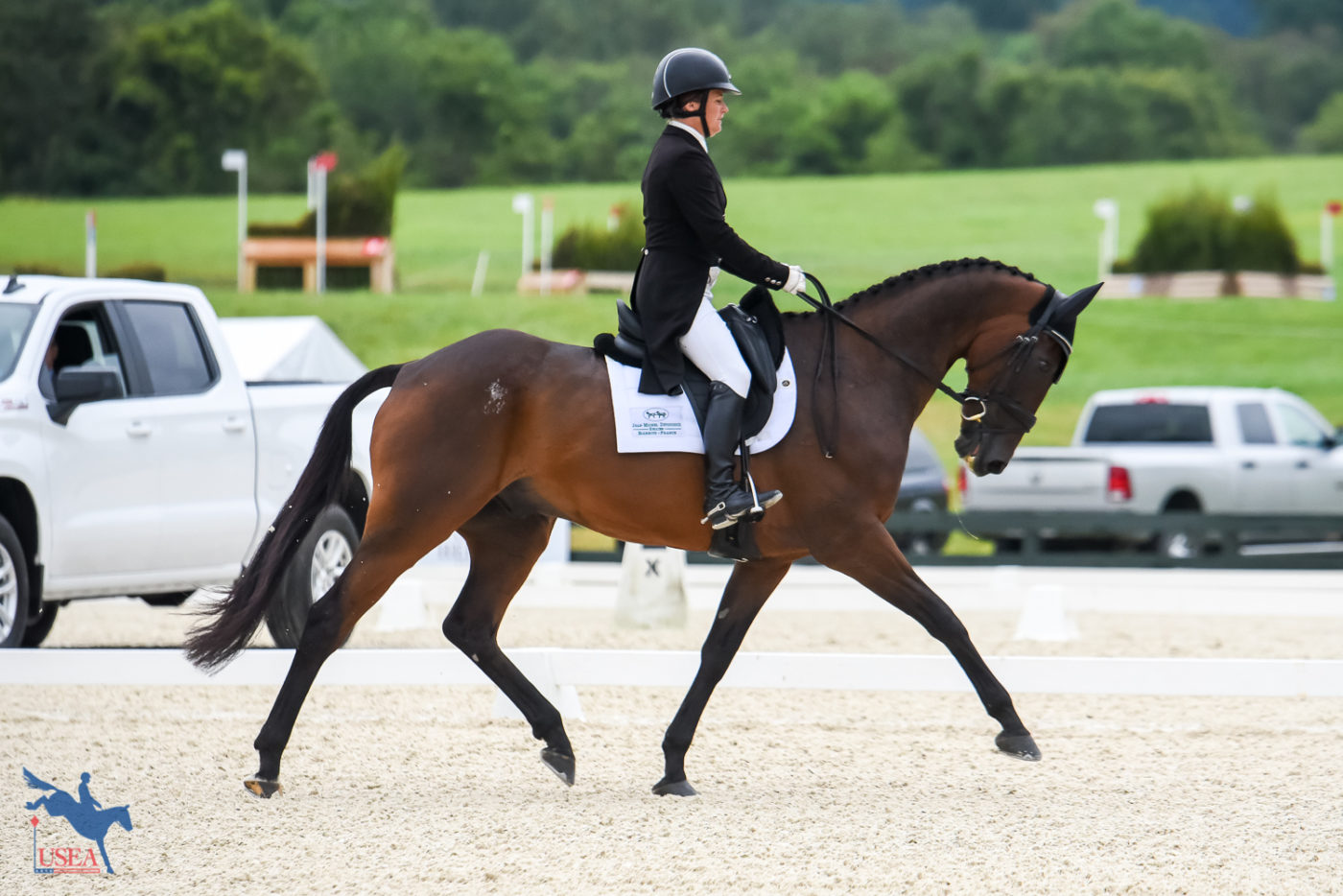 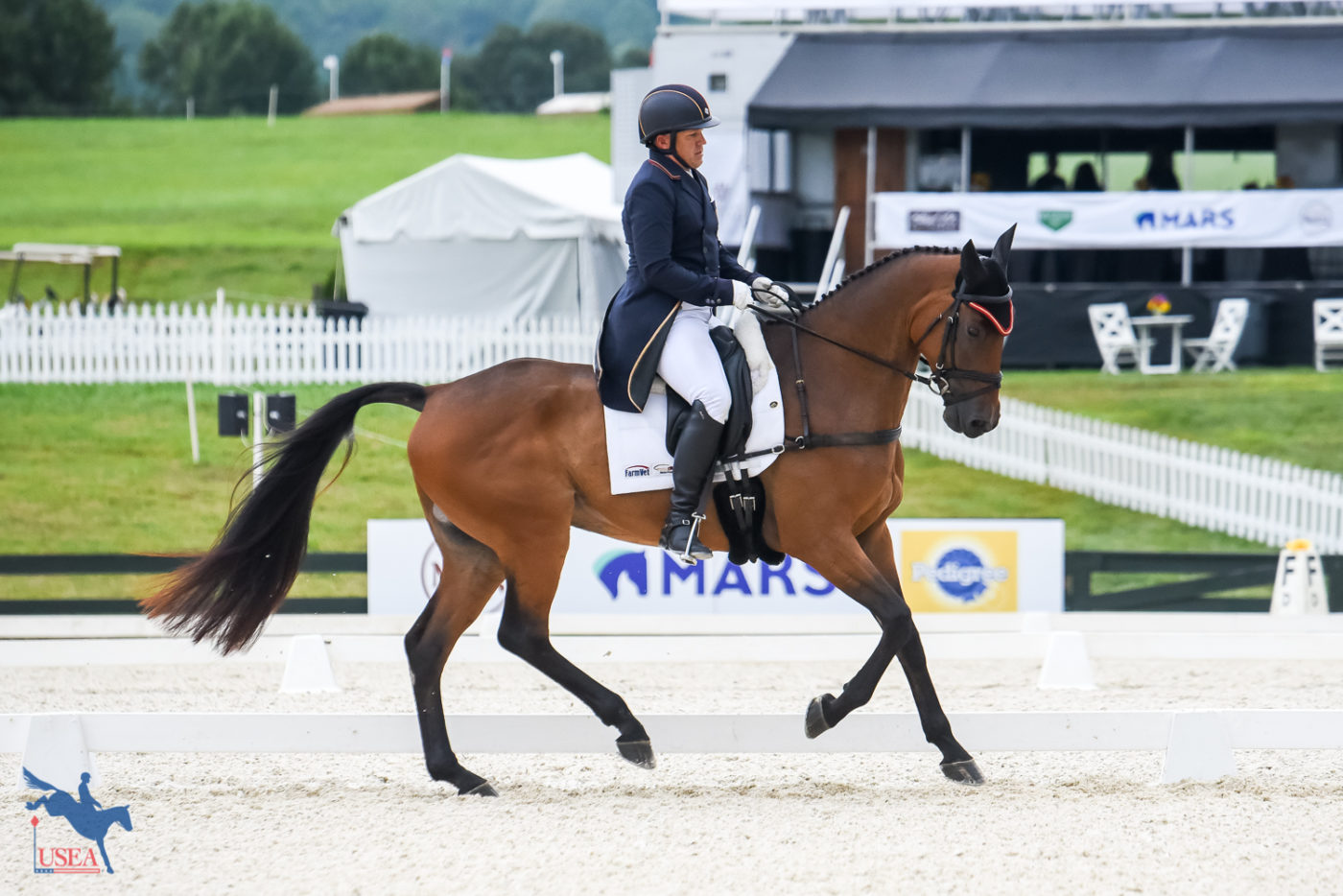 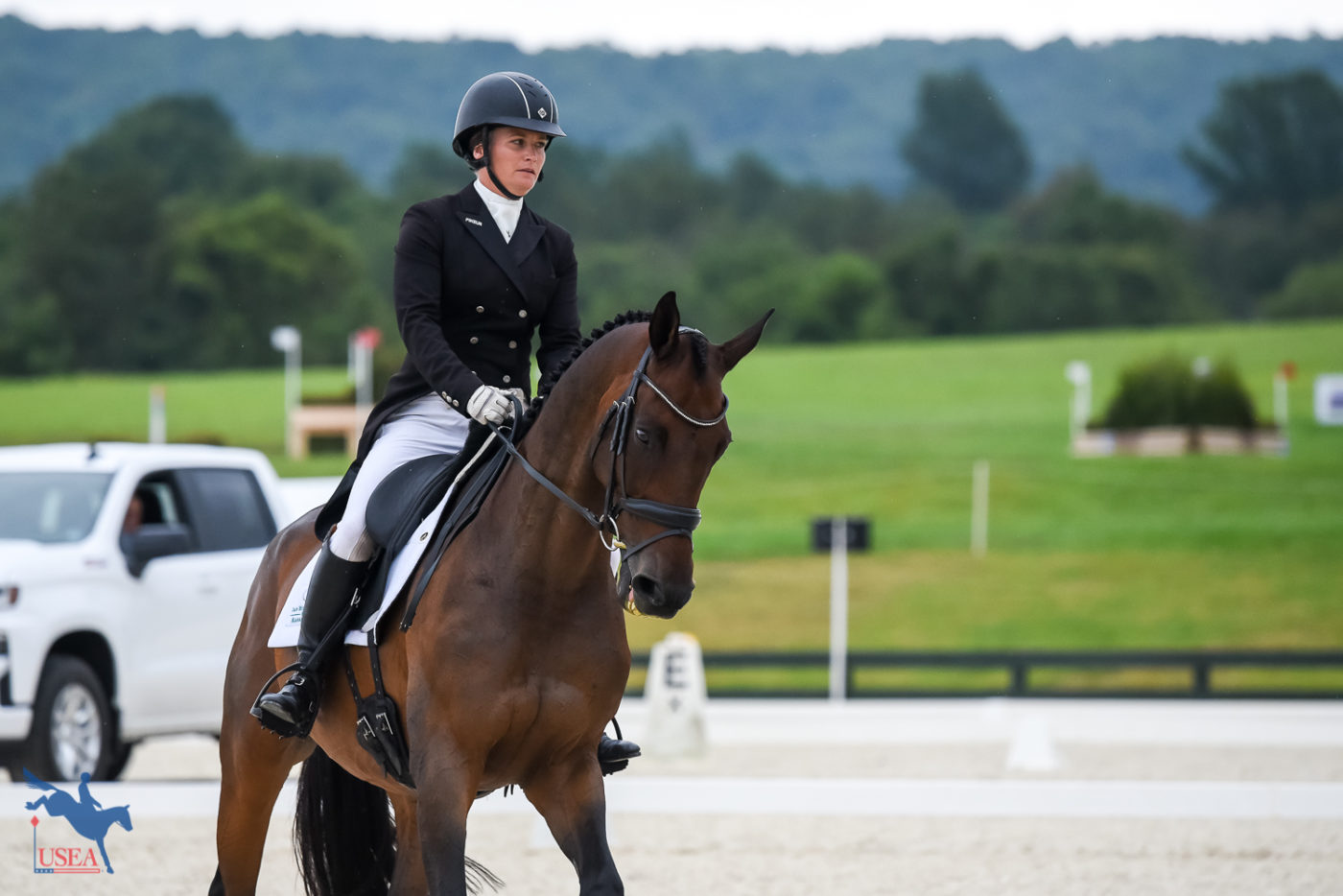 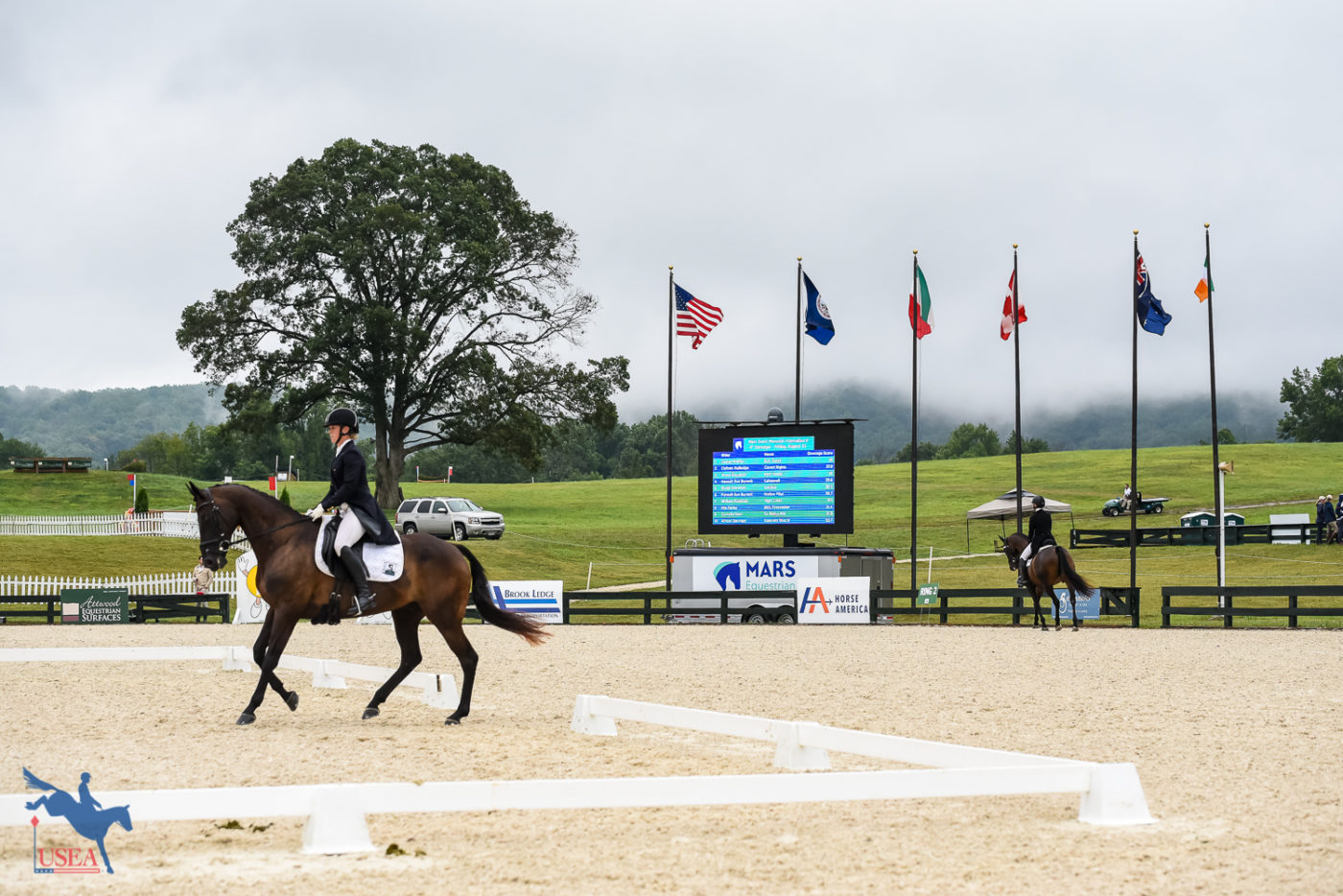 Introducing the New Modified Rider Division at the 2023 AEC Get a Taste of Eventing with the New Event Horse Program The VIP Volunteer: Julie Murray Announcing the 2023 Intercollegiate Eventing Program Team Challenge Calendar Believing In Your Program and Yourself with 2022 RevitaVet USEA Young Rider of the Year Cassie Sanger New Membership Opportunity for Participants of the Volunteer Incentive Program 2023 Interscholastic Eventing League Team Challenge Calendar Now Available Volunteering in the Vet Box with Lauren Nethery Leading YEH Horses of 2022 USEA Podcast #324: What a Year it Has Been!
Show More
Jan 31, 2023 Educational Activities