Tamra Smith thinks that no one has ever made time on the cross-country course in the Adequan USEA Gold Cup CIC3* at The Event at Rebecca Farm, and this year proved no different. Twelve pairs set off on Ian Stark’s cross-country course, half crossed the finish line with no jump faults, but everyone added some time to their dressage scores. Smith was able to move up from second to first when overnight leaders, Chris Talley and Sandro’s Star, Hannah Salazar’s 10-year-old Oldenburg stallion (Sagnol x Poetic Patter) added 11.6 time penalties.

“She was super,” said Smith of Fleeceworks Royal, a 9-year-old Holsteiner mare (Riverman x Marisol) owned by Judith McSwain. “She is young and a little bit full of herself. It has been a struggle since she was 3 to get her to respect the jumps. This year I really turned a corner. I have been working on my cross-country riding with Phillip [Dutton] and not trying to not pull on the reins and it has really paid off.”

Smith is defending her title in this division having won it with Fleeceworks Royal in 2017 despite adding 10.4 time on cross-country. “The CIC is just really hard to make the time because of all of the twisty-turny stuff. I improved on her time from last year. I couldn’t have gone faster. I probably lost a few seconds with that ditch brush, but she was super rideable. I couldn’t have asked her to be any better; she was really great.”

Hawley Bennett-Awad and Jollybo jumped all the way up from sixth to second with the fastest round of the day – adding just 3.2 time. Bennett-Awad and her own 14-year-old British Sport Horse Mare (Jumbo x Polly Coldunnell) are hoping for a spot on the Canadian team for the upcoming World Equestrian Games in Tryon, N.C. so this event held even more importance for the pair.

“I had to jump around clean to prove Jolly and I are still good to go [after retiring on course at the Kentucky Three-Day Event],” said Bennett-Awad. “She couldn’t have put a foot wrong – actually, she didn’t put a foot wrong. I think it was one of my best rides I’ve ever had on her. I didn’t try to make time in the first few minutes because I thought the footing was a little bit hard, and naturally she’s quite fast, but it was great. She was super and after the combination at the end I kind of kicked her a tiny bit, and her ears went forward and she flew along. For her to come in feeling that good at the finish was great. She finished like King Kong.”

Problems were spread out on the course, but both Katherine Rivera and Andrea Nielsen’s days ended at the 14A – the coffin, while Helen Bouscaren retired at the last water complex at 16abcd.

Two pairs did manage to go double clear, and while Thieriot-Stutes had 1.2 time penalties she still praised Chatwin’s speed and cross-country prowess. “He is a magician cross-country. He is unreal. When you stand up to gallop him it is like nothing I have ever encountered and my old Advanced horse was so fast. But he just has this gear box that I can’t explain. I never kicked a single time – he is just so fast.”

This is the pair's second CCI3* – they finished fourth at the Bromont CCI3* last summer before Thieriot Stutes took some time off to have her second son. “I think Bromont [Chatwin] was a little easier to ride there because there is terrain initially,” explained Thieriot Stutes. He was really good like the last three minutes because he finally settled in a little. I think my first two minutes weren’t looking ideal.”

It was her coach (and CIC3* leader), Tamra Smith who motivated Thieriot-Stutes to keep her lead. “I kept hearing T. Smith in the back of my head ‘if you ride bad [Heather Morris and I] aren’t going to be your friends anymore.’"

Thieriot Stutes and Chatwin trekked to Montana from California, but the second placed pair hail from the complete opposite side of the country. Caroline Martin and Islandwood Captain Jack traveled from Pennsylvania to contest the CCI3* and put in a double clear round to move up two spots on the leaderboard.

Islandwood Captain Jack is a 9-year-old Irish Sport Horse gelding (Jack of Diamonds x Suir Touch) who Martin brought up from a 4-year-old and has a methodical plan for his education which included a journey to Rebecca Farm.

“This is his sixth Advanced,” said Martin. “I took my time producing him. I got him as a 4-year-old and did all the work on him. I just want to take my time and I think he it is paying off now. He never did well at the one-star or the two-star levels, but I always said that this horse is a real cross-country horse and a real trier and I think this is his level (and hopefully four-star as well).”

Thieriot-Stutes has a rail in hand heading into show jumping, but hasn’t had the best luck in that phase this year while Martin and Islandwood Captain Jack have only had one rail down this entire year.

“I show jumped pretty bad this year,” said Thieriot-Stutes as she looks ahead to tomorrow. “I was leading at Woodside by 10 points and I didn’t hold on to that, but show jumping has notoriously been what I am so bad at. I don’t know – I know that we have it in us and that we have done it before.”

“This is the longest course he has ever done,” said Martin. “He has never reached a point where he has been body sore and mentally tired and everything. I don’t know how he will show jump tomorrow. The big thing with this horse is that I hope he will be a possible team horse or a four-star horse, so it is just about his education than anything. That part is more important me.”

With two horses retiring on course – Maya Black retired Mowgli after problems at the last water and Jennifer McFall retired High Times after a stop at the coffin – only eight horses will be presented tomorrow.

For all live scores at The Event at Rebecca Farm, go here. Find the live scoring for the NAYC here.

Live Streaming for The Event at Rebecca Farm may be watched here. 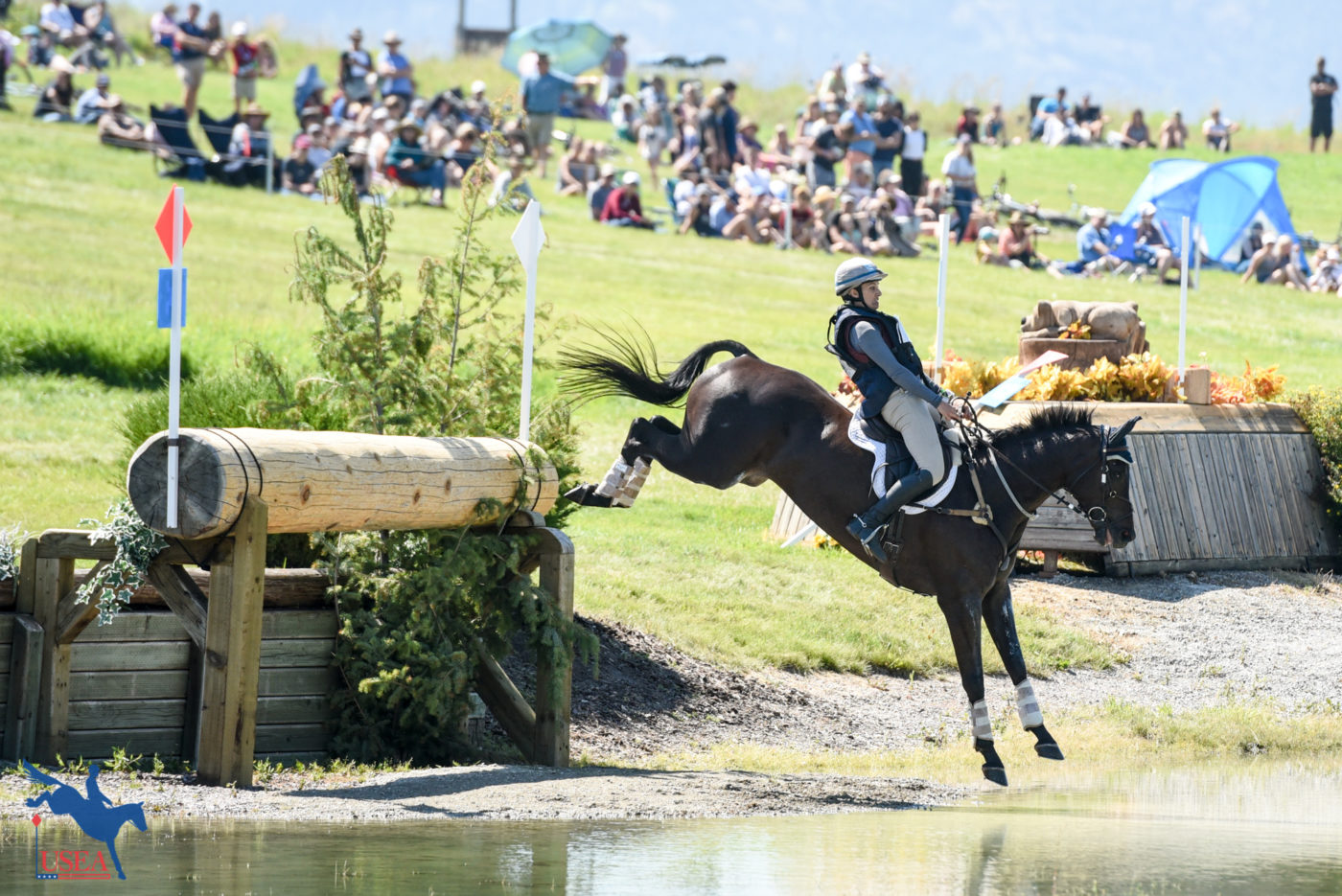 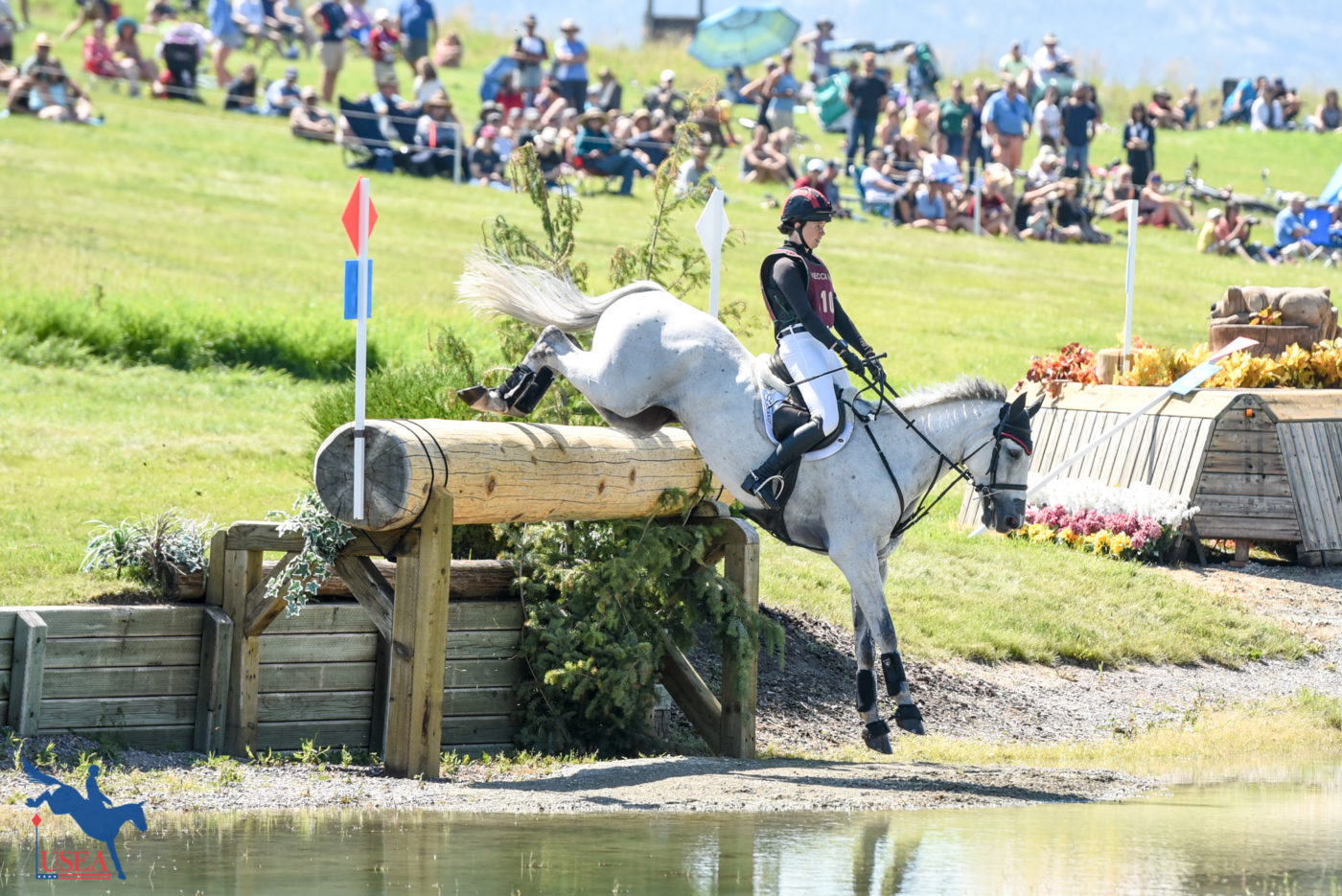 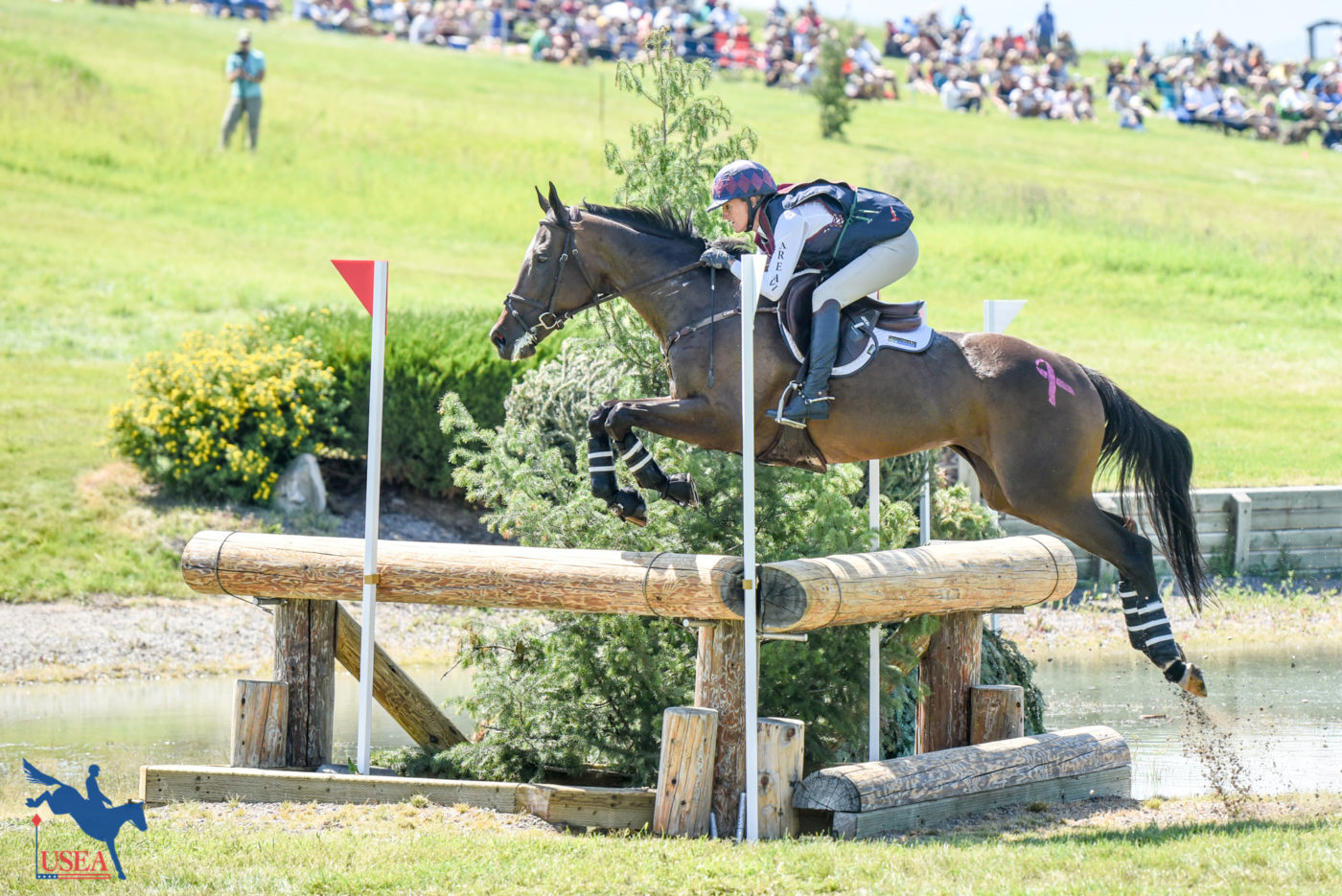 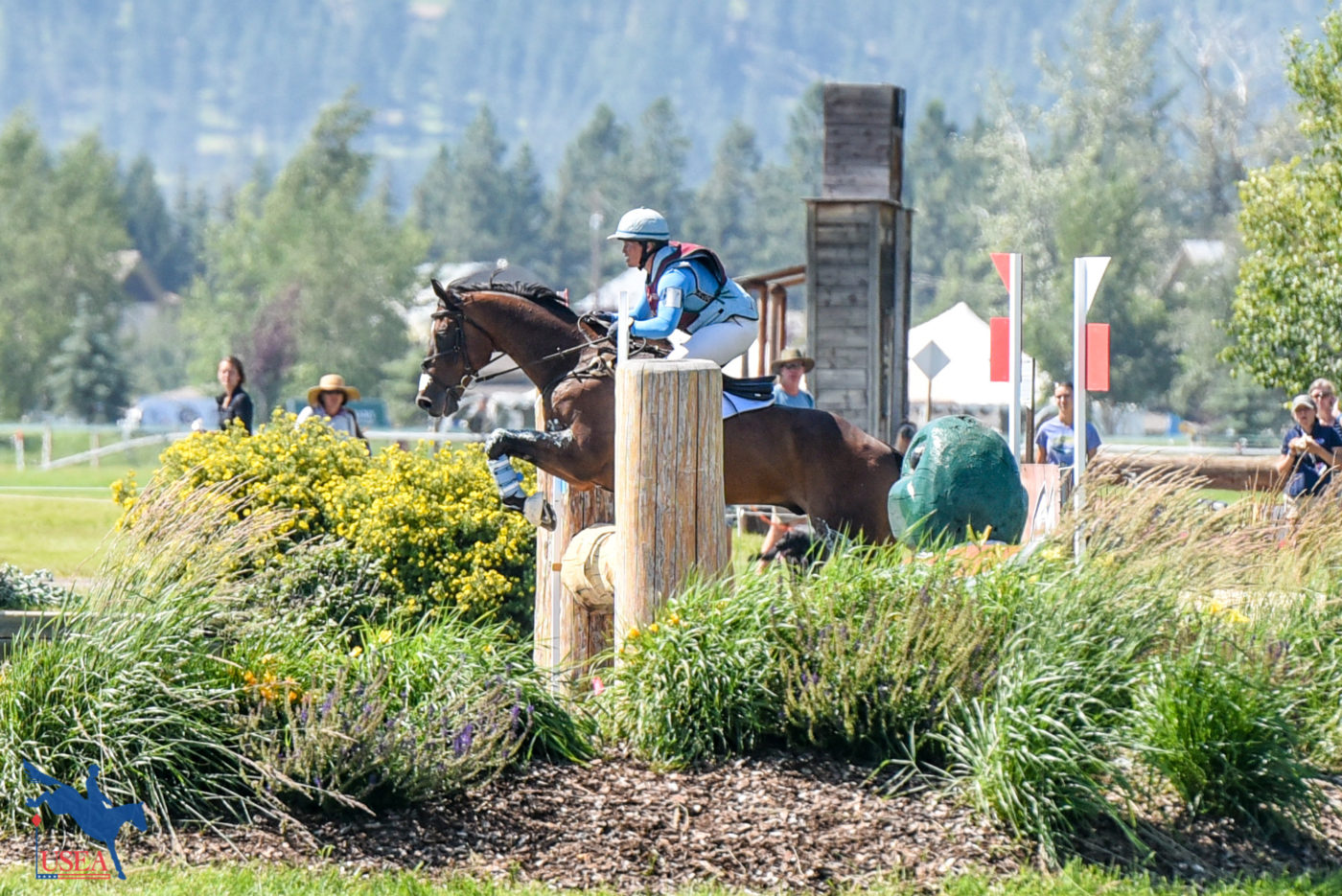 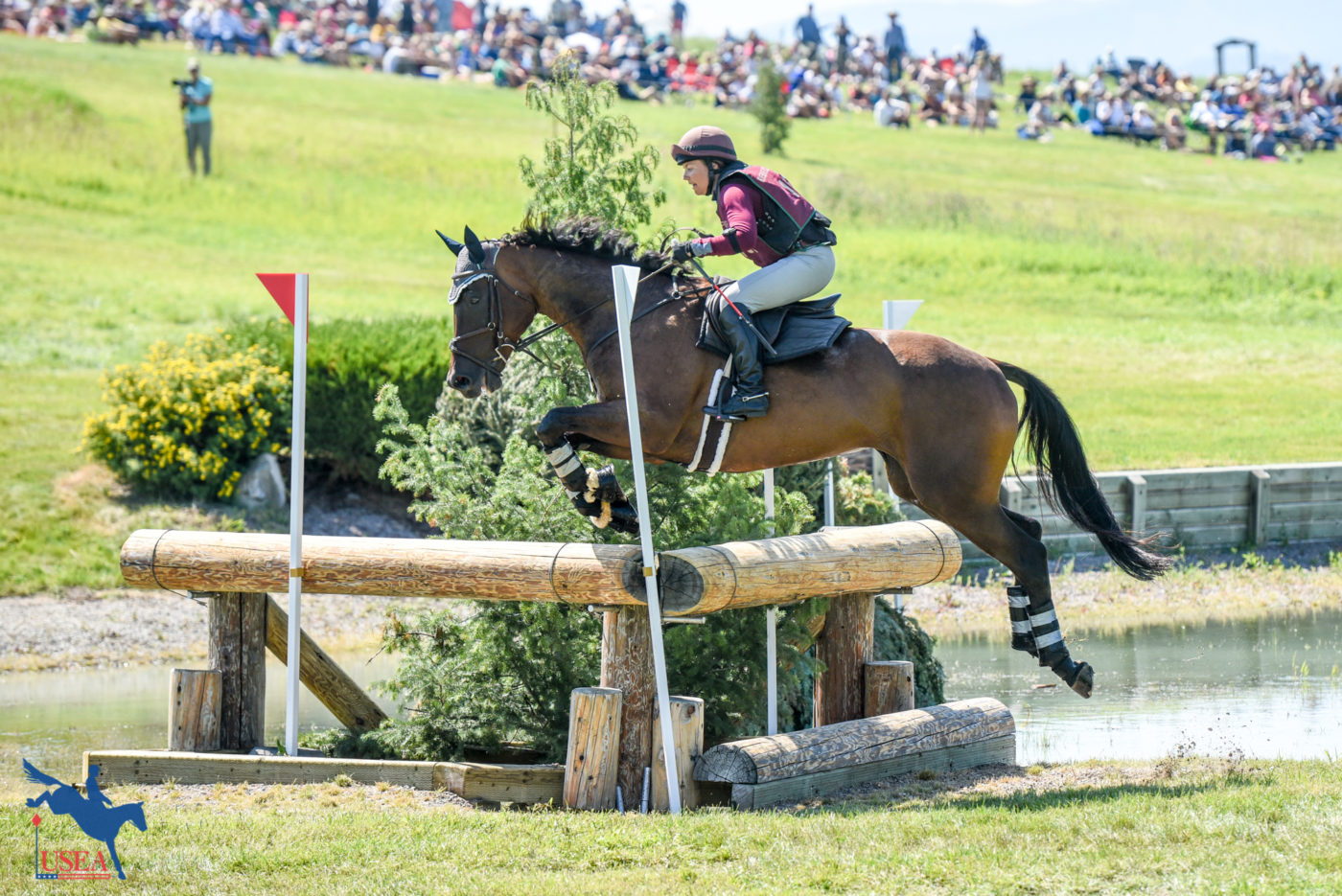 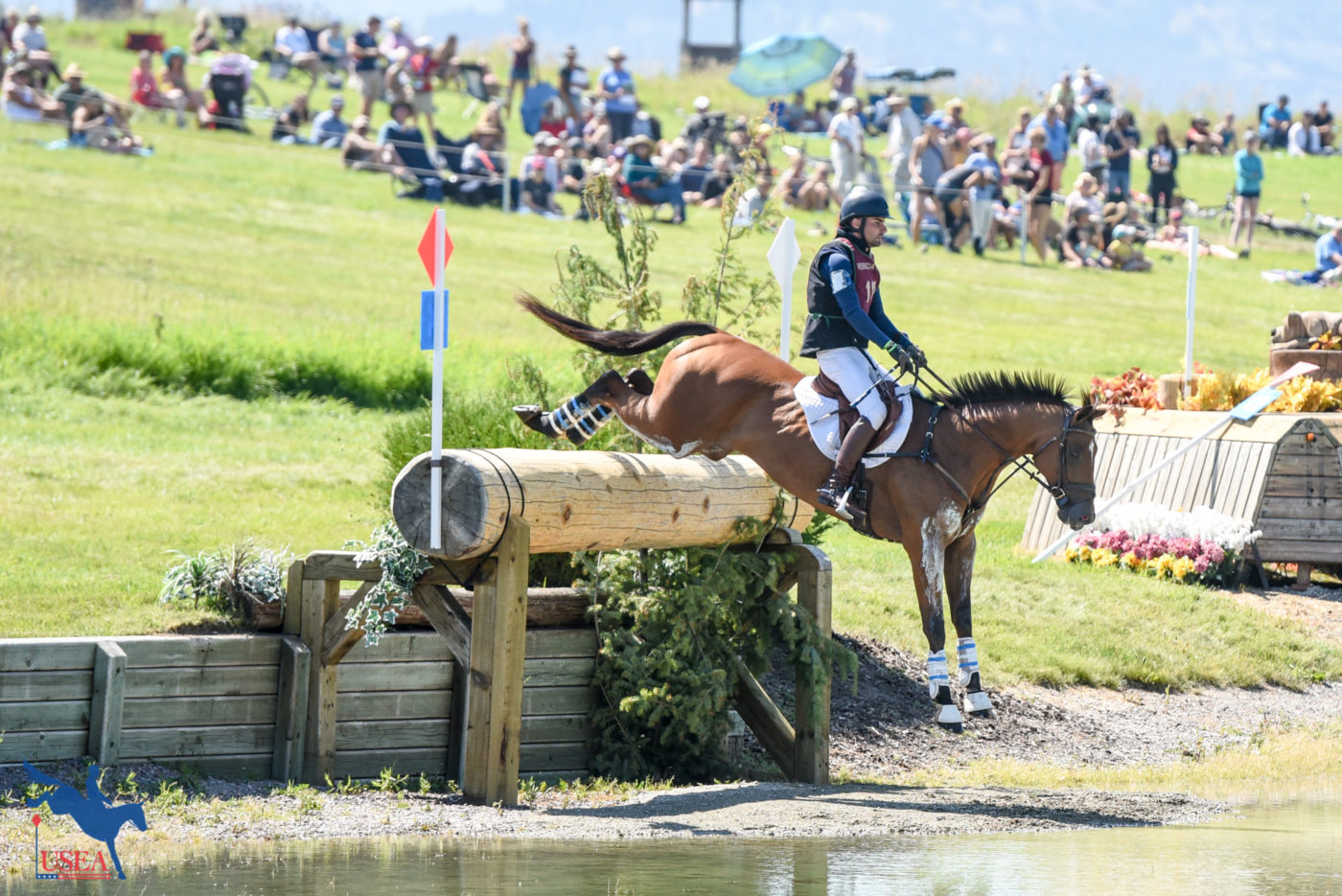 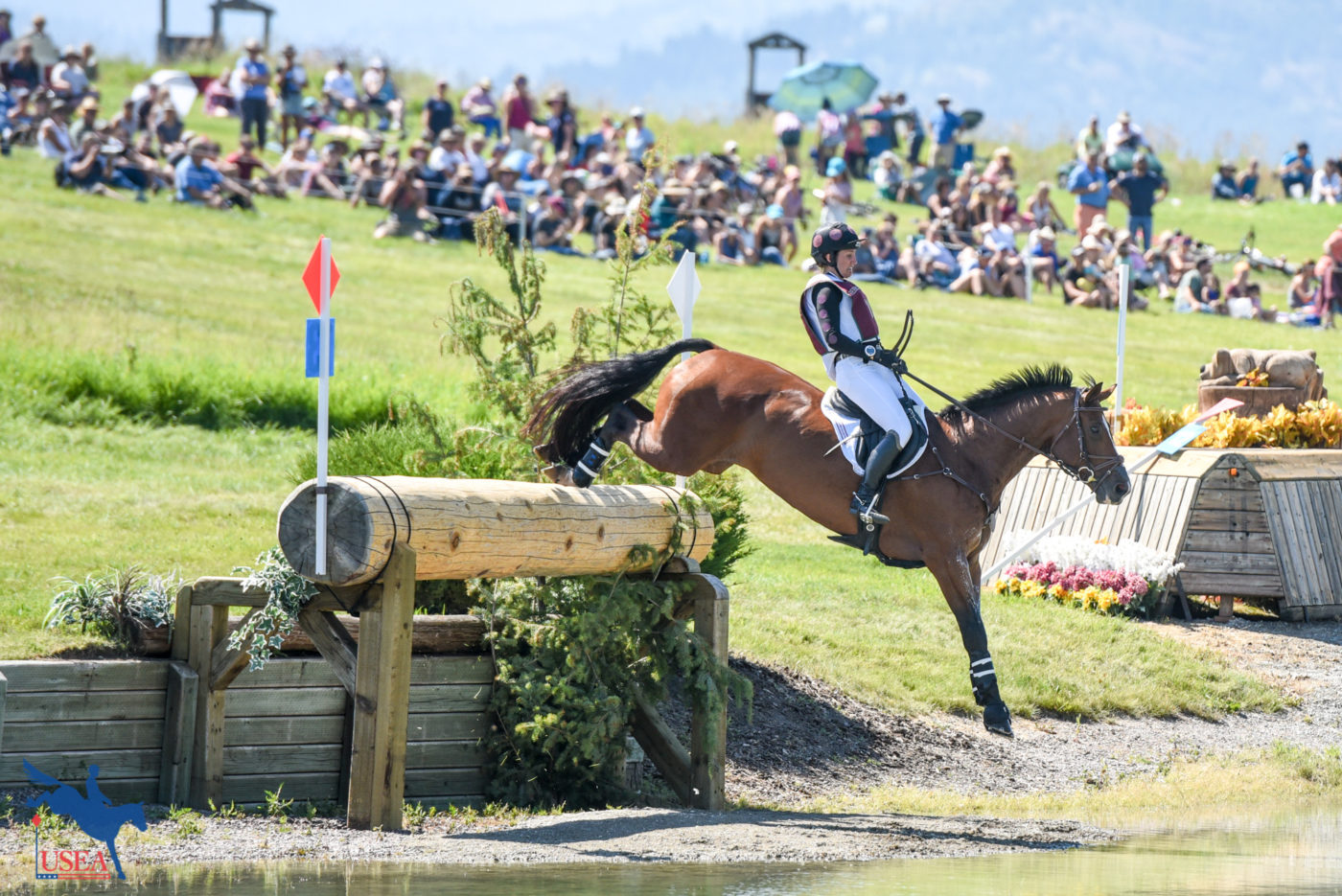 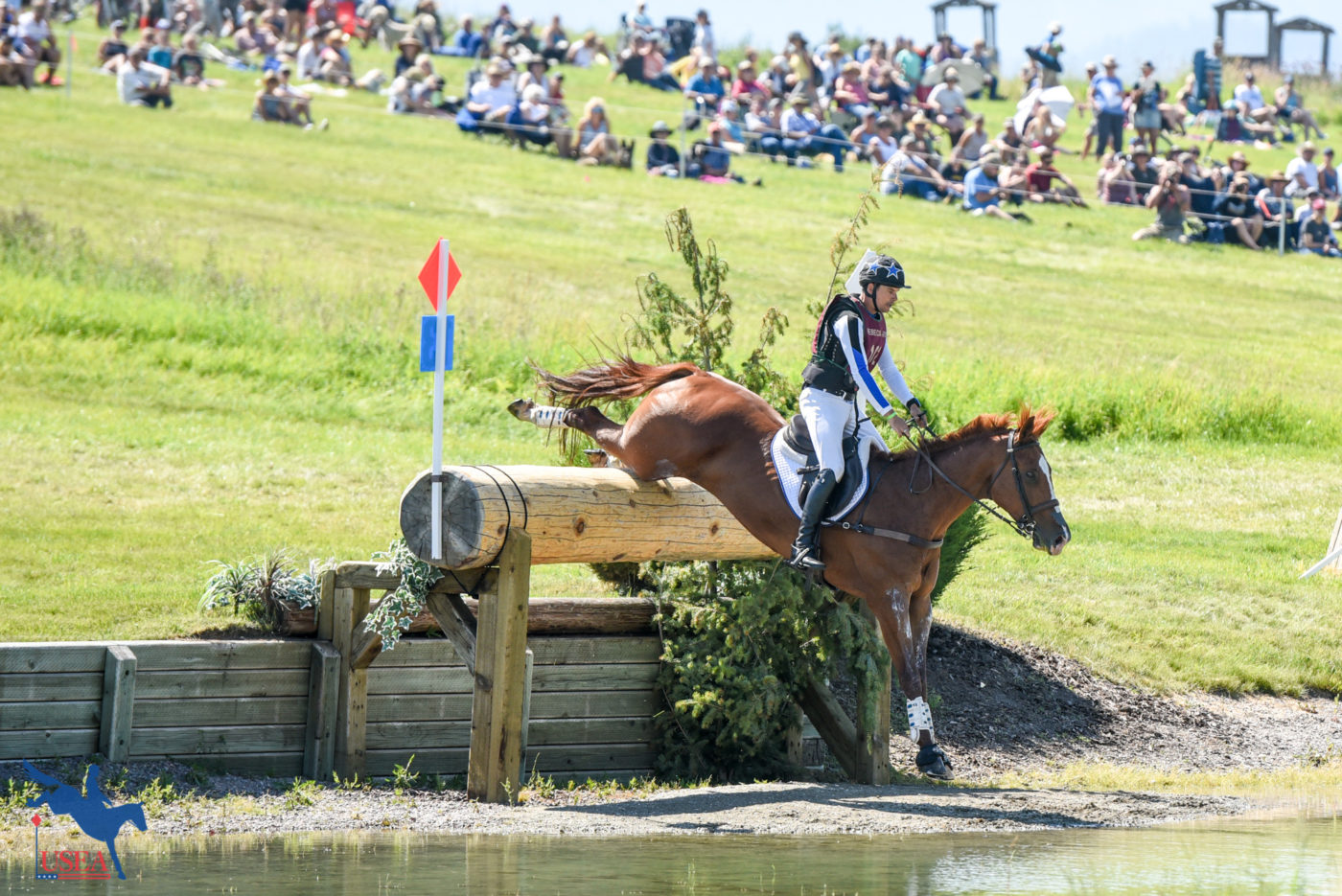 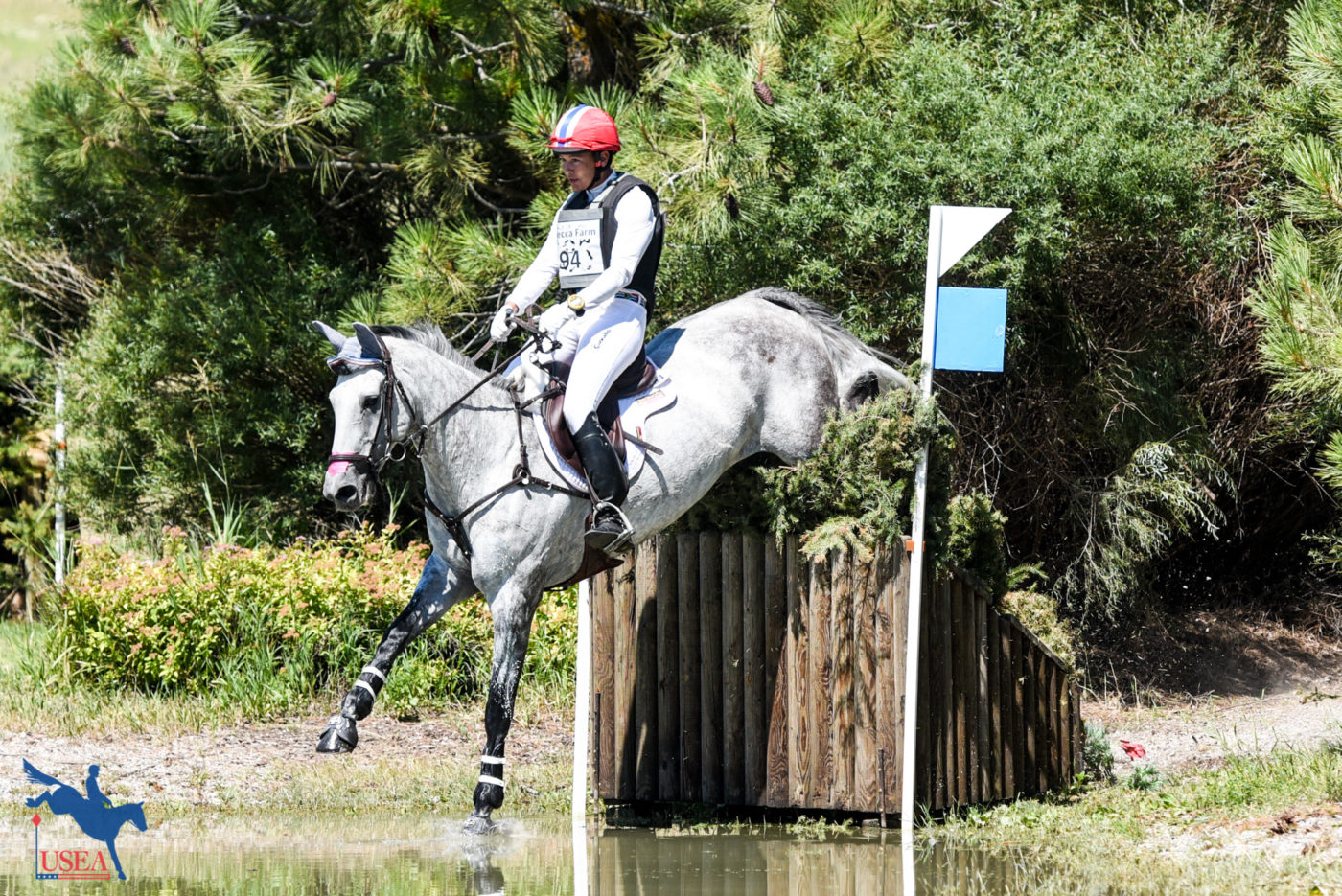 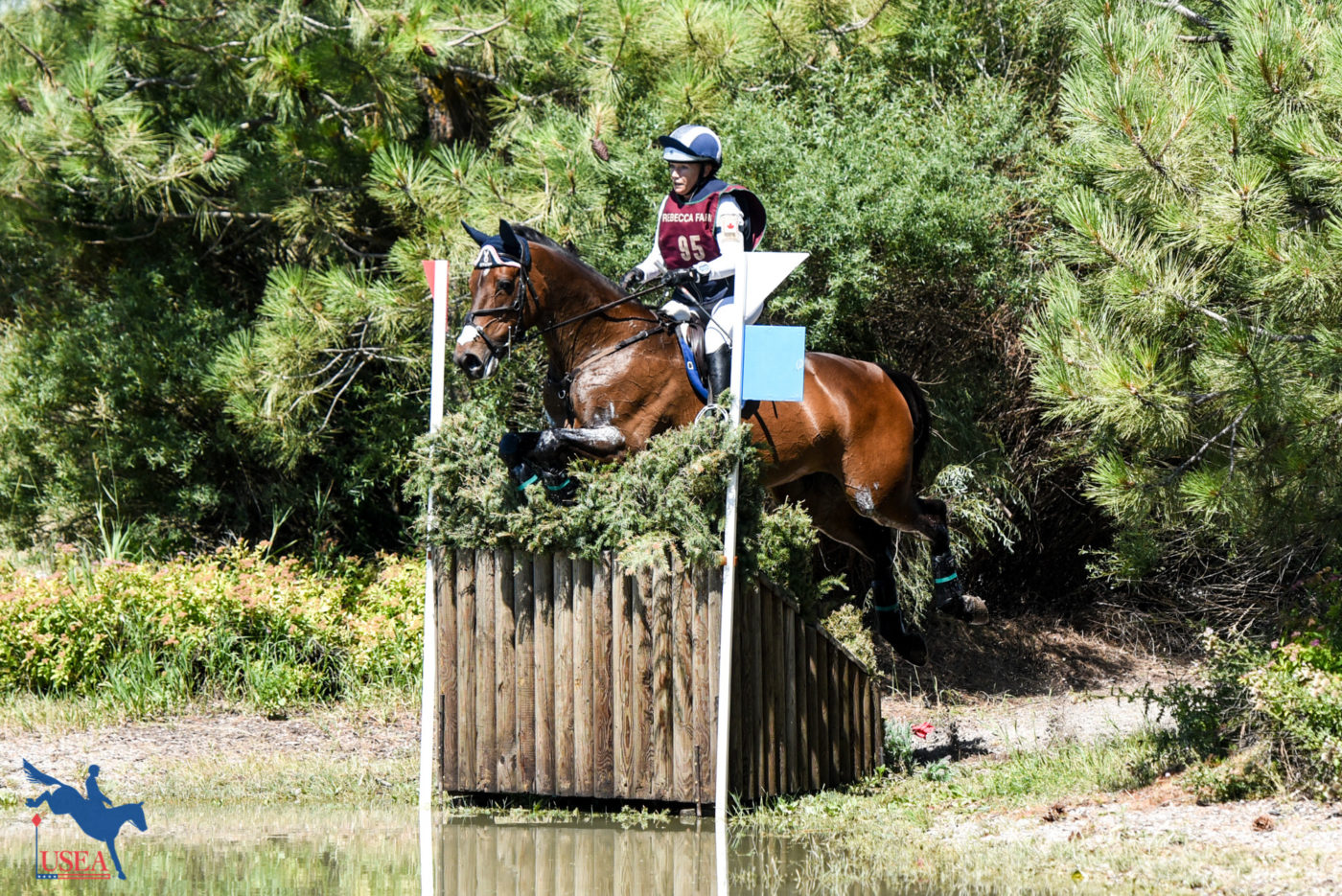 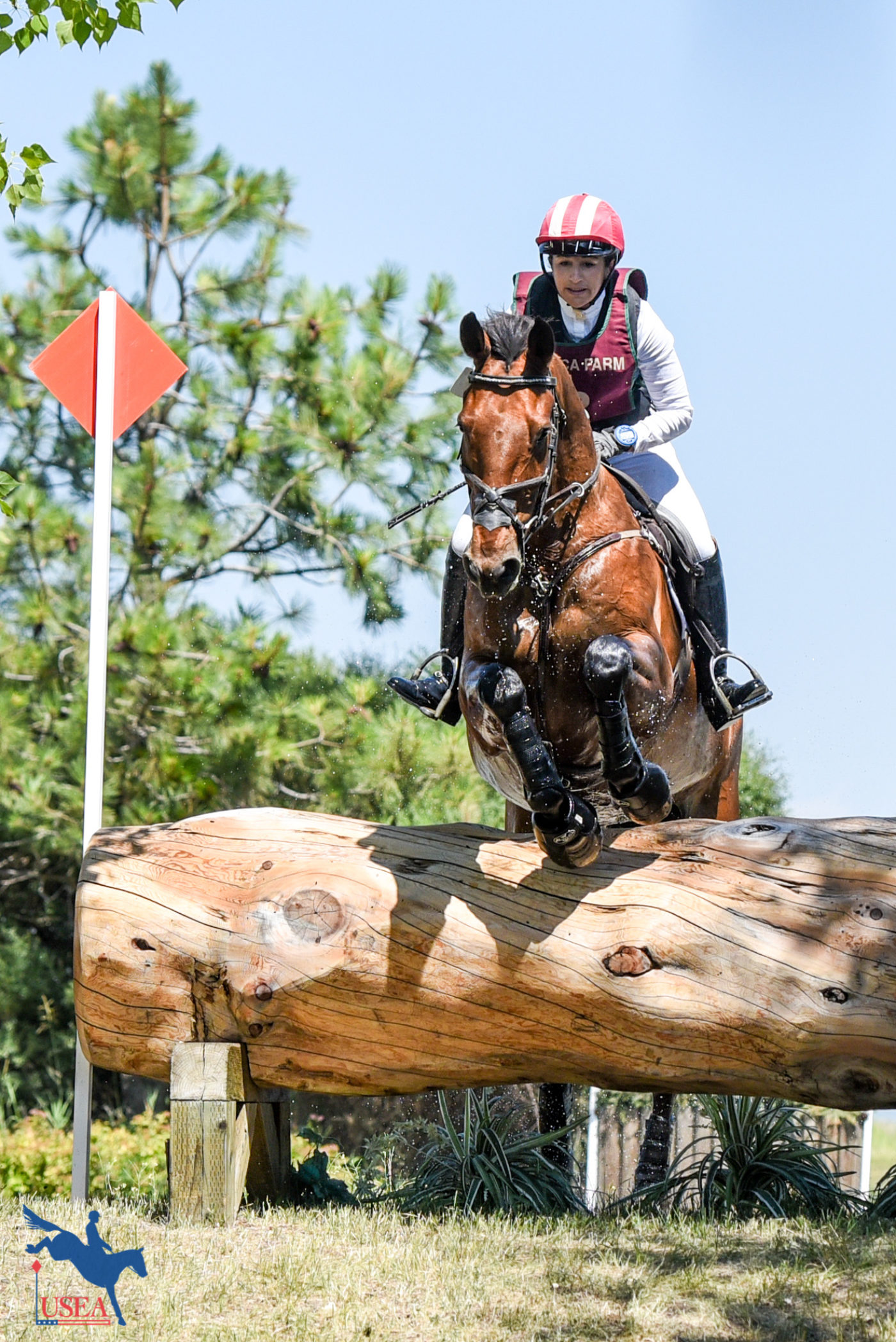