Other than a mid-afternoon one-hour delay for a thunderstorm that looked to be headed straight for The Colorado Horse Park in Parker, Colorado, Novice and Beginner Novice cross-country at the 2018 USEA American Eventing Championships (AEC) presented by Nutrena® Feeds went off without a hitch. Three of the four Novice dressage leaders held onto the top stop after the second day of competition, while all but one of the Beginner Novice frontrunners following dressage managed to stay at the top of the leaderboard.

The Novice Rider division watched a new combination rise to the top of the leaderboard as Colorado’s Chris Kawcak and his own Maggie Belle, a 15-year-old Canadian Warmblood mare, took over the lead after the second phase of competition and head into the final phase tomorrow on a score of 25.0.

“I grew up riding team roping horses and I just started riding her about three years ago,” said Kawcak, whose wife, Erin Contino, is currently sitting atop the Novice Amateur division.

He continued, “Because Erin had evented for years, we just started competing too. We’ve had some pretty good success over a period of time. The mare has been great, she’s really good at dressage, she’d never done cross-country until just a few years ago, so she’s very ‘lookie’ but as long as it’s a confident ride, she’s great. She’s fun, she’ll never owe me anything.”

“We’ve competed here for the past few years, and around the Midwest as well. I thought the course today was good. It was a little different because it had a lot of turns on it and a great set-up, but the mare went out and was awesome. I was really proud of her - there was a lot of things to look at.”

Anna Howell piloted her own 15-year-old Thoroughbred/Shire gelding Bodacious Affair (Kaeson’s Tuxedo Affair x Exclusive Ballerina) to second in the standings with a score of 25.2. Julie Kuhle and her own Orion (JS Ebony N Ivory x Lucinda), a 10-year-old Appaloosa Sport Horse gelding, secured third place after crossing through the finish to sit on a 26.0.

In the Novice Amateur division, the top three riders held on to their placings. Erin Contino of and her 6-year-old Thoroughbred gelding Handsome Ransom (Desert Warrior x St. Casmir’s Secret) earned a score of 25.8 yesterday in dressage to lead the division. Contino said she felt very pleased with her steady mount as she guided him faultlessly around the cross-country course.

“When I walked the course,” said Contino, “I thought it had a lot of turns, so I thought it might not ride as fluidly as I wanted, but it actually rolled really well. He hit a rhythm right out of the gate, and we didn’t really have any issues. He’s a really honest horse so I’m very lucky in that he tends to just know that his job is to get to the other side. He does that without questioning me, and he stays very straight, very honest.”

Moving into the final show jumping phase tomorrow, Contino has one plan, and she’s sticking to it. “I am really going to work on keeping my nerves in check and not get impatient,” she concluded.

Michelle Meghrouni and Swizzle (Blauer Vogel x Swiss Detail), a 7-year-old Holsteiner mare, sit in second place on a score of 27.0 and the third-place pair, Lorilee Hanson and her own 7-year-old Warmblood/Thoroughbred gelding Hypnotik (Montego Bay x Trelawny) are half a point behind on a 27.5.

Yesterday, Julia Brittain aboard her own Haiku, a 6-year-old Dutch Warmblood gelding by Sir Donnerhall, earned the lowest score of the Junior Novice division, a 29.2, for first place. They jumped clear and inside the time today on cross-country to maintain their impressive lead.

“I didn’t think much about the cross-country course when I walked it,” commented Brittain, “but riding was much different than what I expected. It was a lot more tough than I had originally anticipated, and was a harder ride than what I’m used to. My horse is young, but he hasn’t felt that green in a while, so I was a little unprepared for how he ended up acting to things like the ditch and a few of the combinations. I felt like I had to ride it a lot harder than I had initially expected to.”

Brittain also noted that show jumping is her hardest phase, so tomorrow will be the ultimate test for her. “Show jumping is definitely the phase that makes me the most nervous,” she said. “When I get nervous it hinders his performance, so I think that I just have to stay calm and keep him energetic while moving forward.”

Amanda Boyce and her own 12-year-old Welsh Cob gelding Mercury (Machno x Carwyn) sit in second place on a score of 32.3. Madison Boesch and her own Seamless, a 9-year-old Warmblood mare, moved into third on 33.3 with a clear round.

Tamra Smith sits in yet another top place position moving into Sunday’s show jumping phase in the Novice Horse division, this time aboard the MB Group LLC’s 5-year-old Oldenburg gelding MB MaiStein, after riding across the cross-country track to a score of 28.1.

“He’s ready to go Training and he’s looking to go to the Young Event Horse Championships,” said Smith of her young mount. “He’s such a bright talent for the future. He’s 80% Thoroughbred and is an unbelievable horse. His gallop is tremendous and he just has a great mind. He put a perfect test out, and came out to cross-country and jumped beautifully. It’s just so fun to produce them from 3-year-olds. He used to be really nervous about ditches, so we came to the ditch and didn’t know what was going to happen. He just popped over it, and that is so fulfilling to see him grow up and do his job perfectly. I’m just so proud of him.”

Beginner Novice Rider was one of five divisions that were not able to complete yesterday due to the weather, so the riders performed their dressage tests this morning before setting out on cross-country this afternoon. Tricia Leslie of Colorado and her own Inate Dignity (Subordination x Indygo), a 12-year-old Thoroughbred gelding, held the lead following dressage on 23.3 and added nothing to their score on cross-country to maintain first place heading into show jumping tomorrow.

“You never know [how your test is going to to],” said Leslie, “so when I came out I was like, ‘Gosh, that felt very good.’ It went better than I expected. Going into cross-country, I didn’t want to get it over with, so I was totally ready to go. The course was pretty straightforward, so there weren’t any big surprises.”

As show jumping is their toughest phase, Leslie has a plan for success for tomorrow. “Our Achilles heel is stadium!” she confided. “The plan is to just make sure that he’s really in front of my leg and to give him as much support as he needs. It’s kind of a fine line, so I hope we are able to find that for him so I’m not pushing too hard. He’s a good boy.”

Fifth-placed Liz Reilman and her own 14-year-old Thoroughbred gelding Diamondexpectation (Valid Expectations x Appeasement) moved up to second place on their dressage score of 29.8 following cross-country, and sixth-placed Sarah Sousa and Black Tye Affair (Haymarket x Gone Lady), her own 16-year-old Thoroughbred gelding, also jumped up the leaderboard into third place on 31.5 after putting in a double clear round.

Washington D.C.’s Cami Pease and her own Vibrant, an 18-year-old Belgian Warmblood gelding, dominated the Beginner Novice Amateur division today, as the pair scored a 24.5 to take a handy lead. The pair currently lead by over four points as the group will look to contest show jumping tomorrow.

“Cross-country was really good,” noted Pease, “really fun, big, open, nicely set up and well-designed [with] gorgeous scenery. He was bold, confident, and positive. That's what I wanted.”

Looking to the final phase of competition, Pease just hopes to successfully maneuver the track. “Show jumping is actually my favorite phase,” she said. “That’s where I’m most comfortable and cross-country is where I’m most nervous. I’m the opposite of most eventers. So now I feel like the hard part is over. Tomorrow I’ll go in the ring and just go around. Sit up and put your leg on, that’s all you have to do.”

When the dressage leader of the Junior Beginner Novice division ran into some trouble on cross-country, Haley Miller and Mr. Melvin (Compromise x Leona's Hope) were ready to step into the lead with a double clear round. Miller and her own 7-year-old Thoroughbred gelding sit on a score of 29.1 heading into show jumping.

“Both the Horse Park and the AEC are amazing!” said Miller, who is from Texas. “My dressage test was okay, I didn’t think that it was the greatest, but, he’s just Melvin. He’s a good boy! I liked the cross-country course, I thought it was pretty straightforward. It rode like it walked. There were some spots where he was green, but I just gave him a push and we got over it.”

Miller does not have a rail in hand tomorrow, so has a lot on the line in the final phase. “Going into show jumping tomorrow my goal is just to trust him; he’s going to do great!” concluded Miller.

Sitting on a 30.3 and in a tie for second place are Maya Pessin and This Bird, her own 9-year-old Thoroughbred gelding, and Ella Robinson and Fernhill Fearless des Terdrix (Nabab de Reve x Untouchable), her own 8-year-old Dutch Warmblood gelding.

Alexa Ehlers of Kentucky and her own 12-year-old Hanoverian gelding Clear Laveer (Rascalino x Hauptstutbuch Wincenta 2) cruised around clear out on cross-country to lead the Beginner Novice Horse division on their dressage score of 27.4.

“It was fun!” said Ehlers. “It was good, he came out not 100 percent focused and understanding what his job was, but then as he went along he figured out the game and he became way more confident. That was the goal. I was pleased. By the end he was cantering up to everything, not even looking at them. He had a big peek at the ditch and the gully. I was really proud of him. It’s cool to have that kind of a relationship built up now. He tried really hard!”

Click here to view complete results from the day. 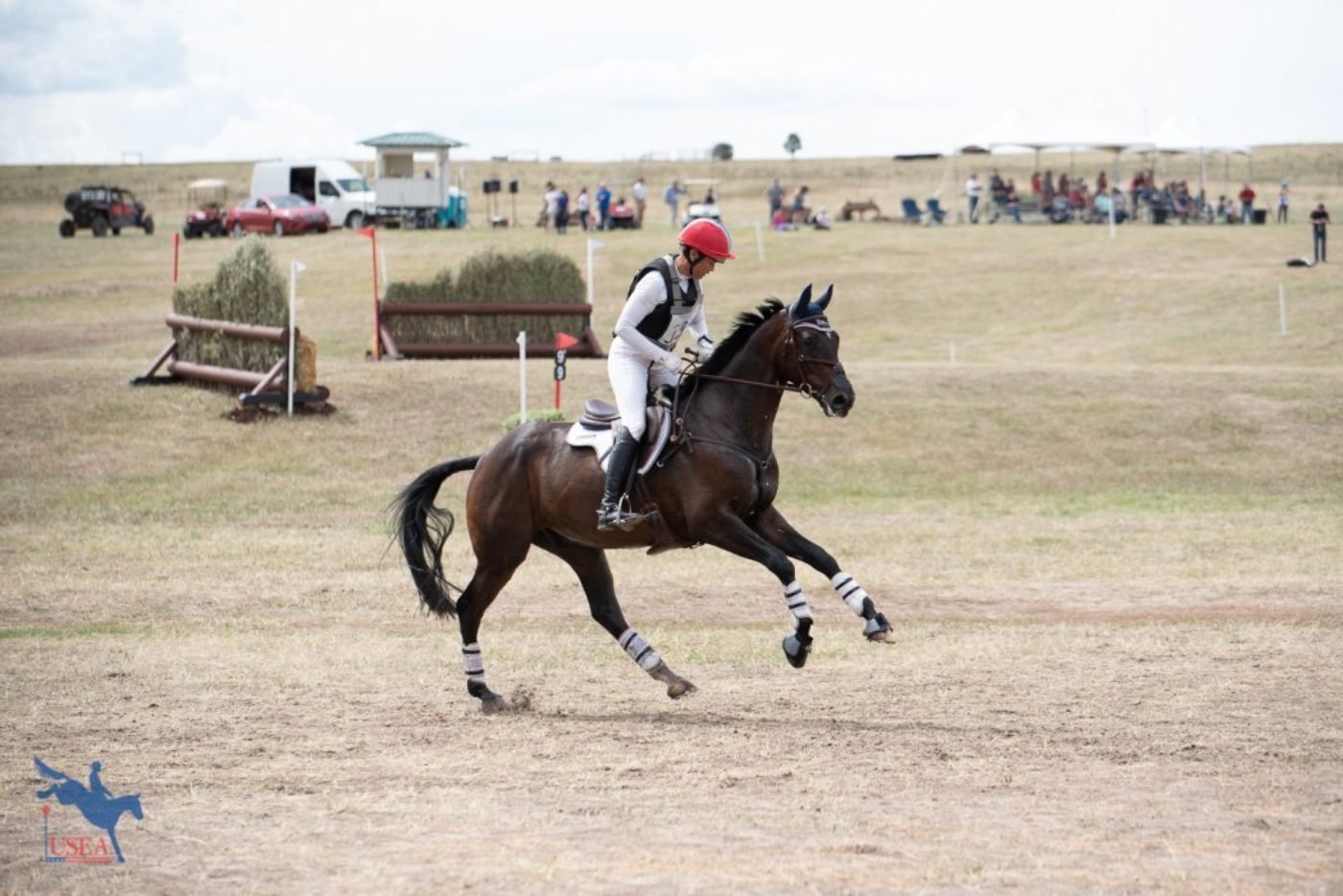 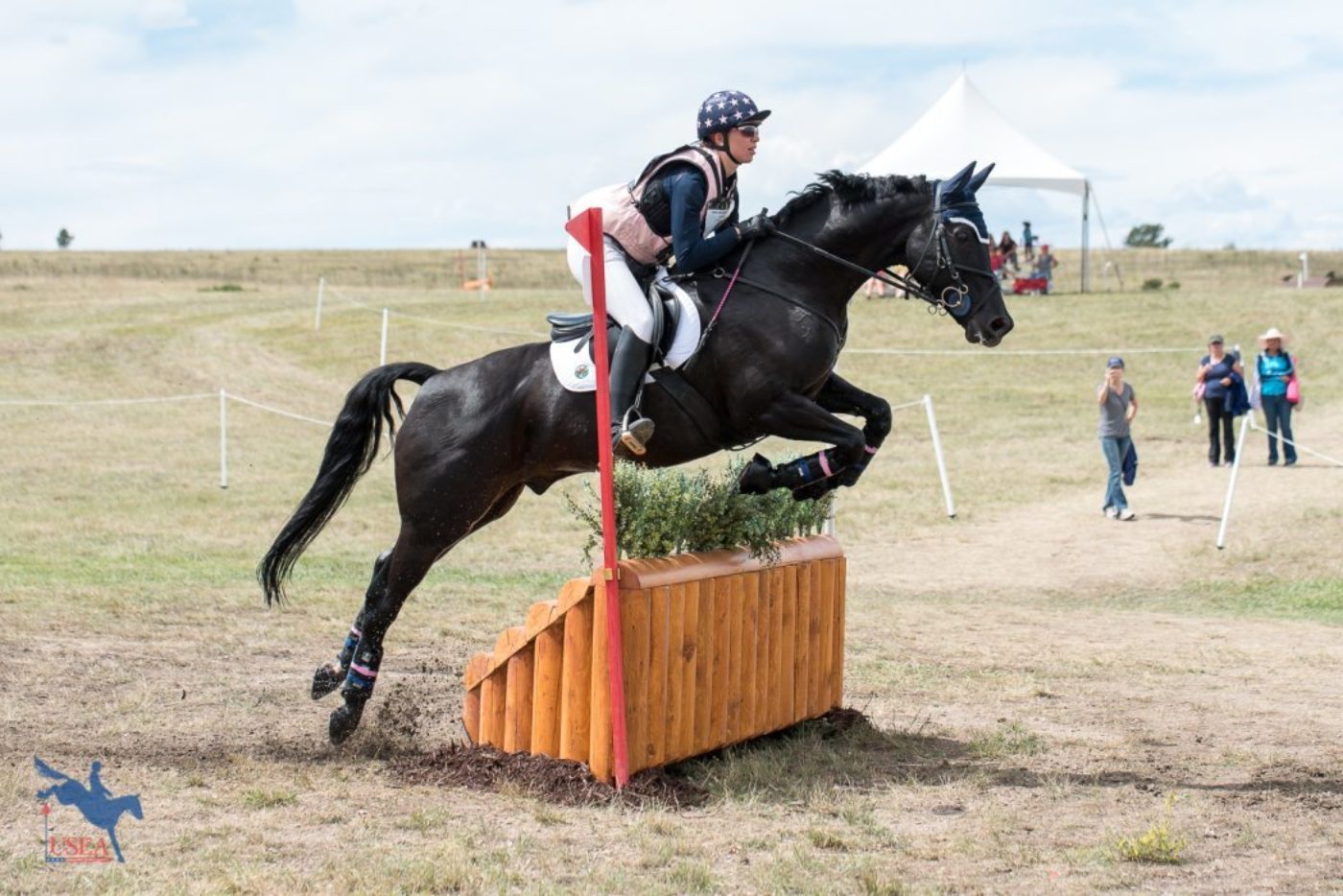 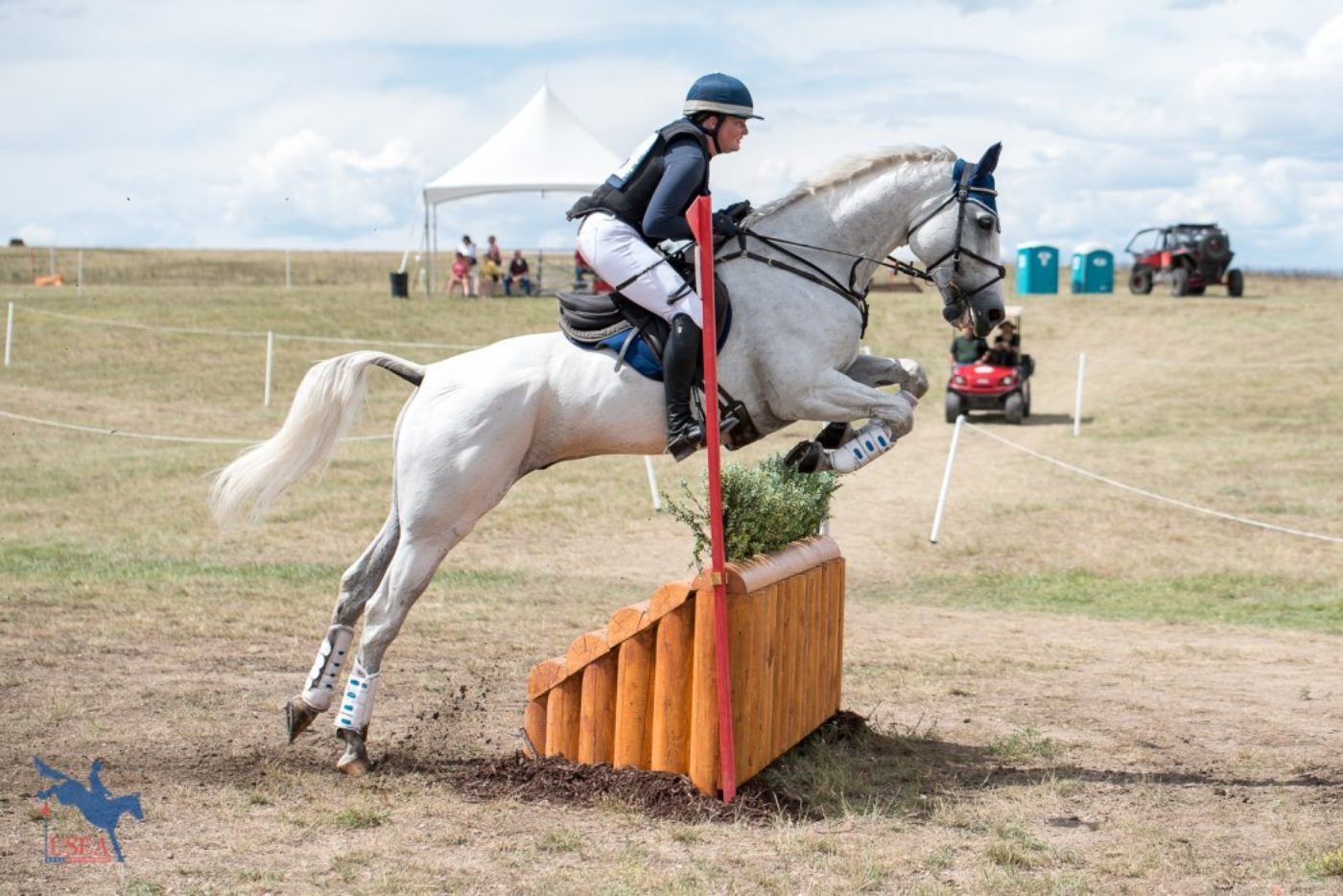 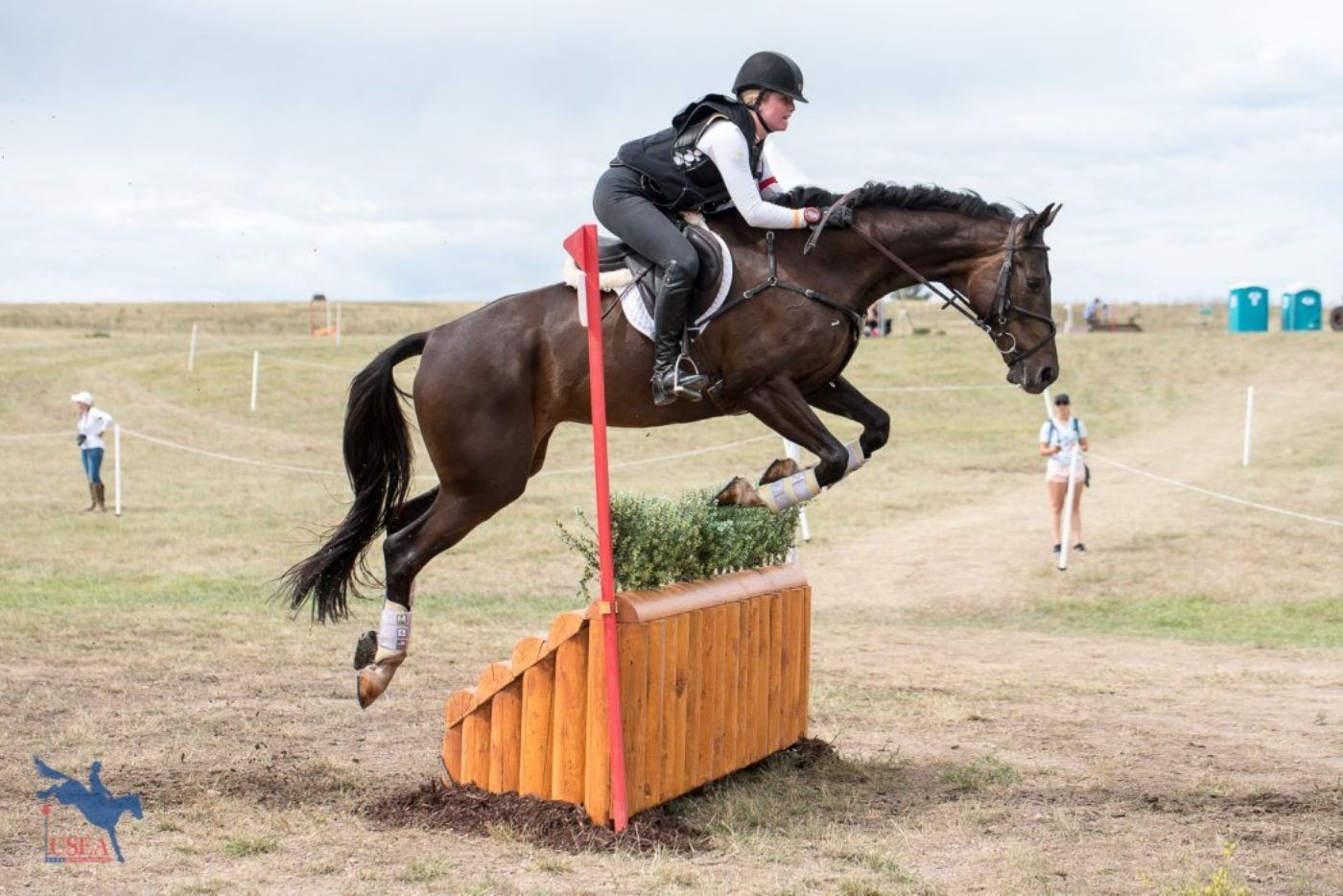 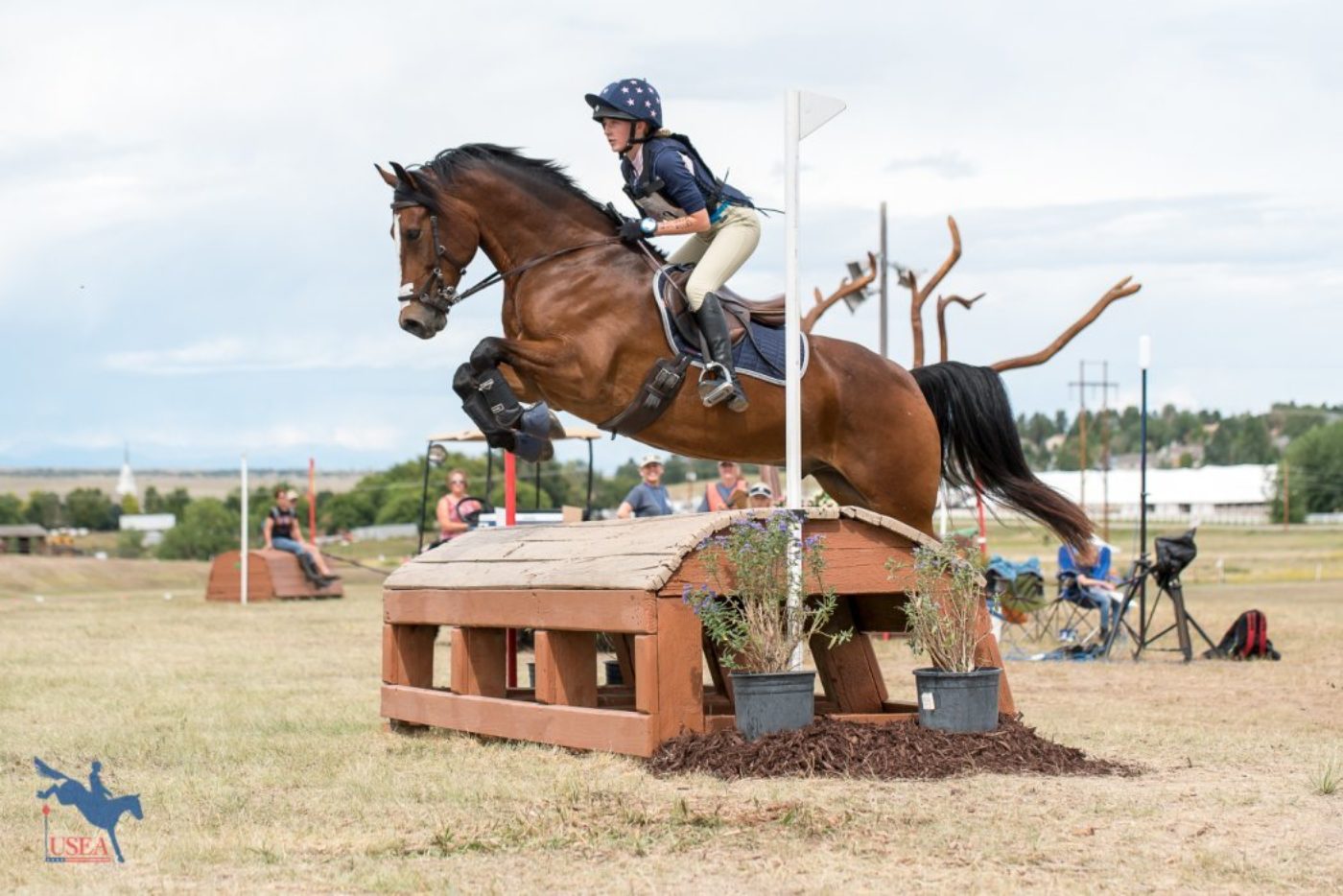 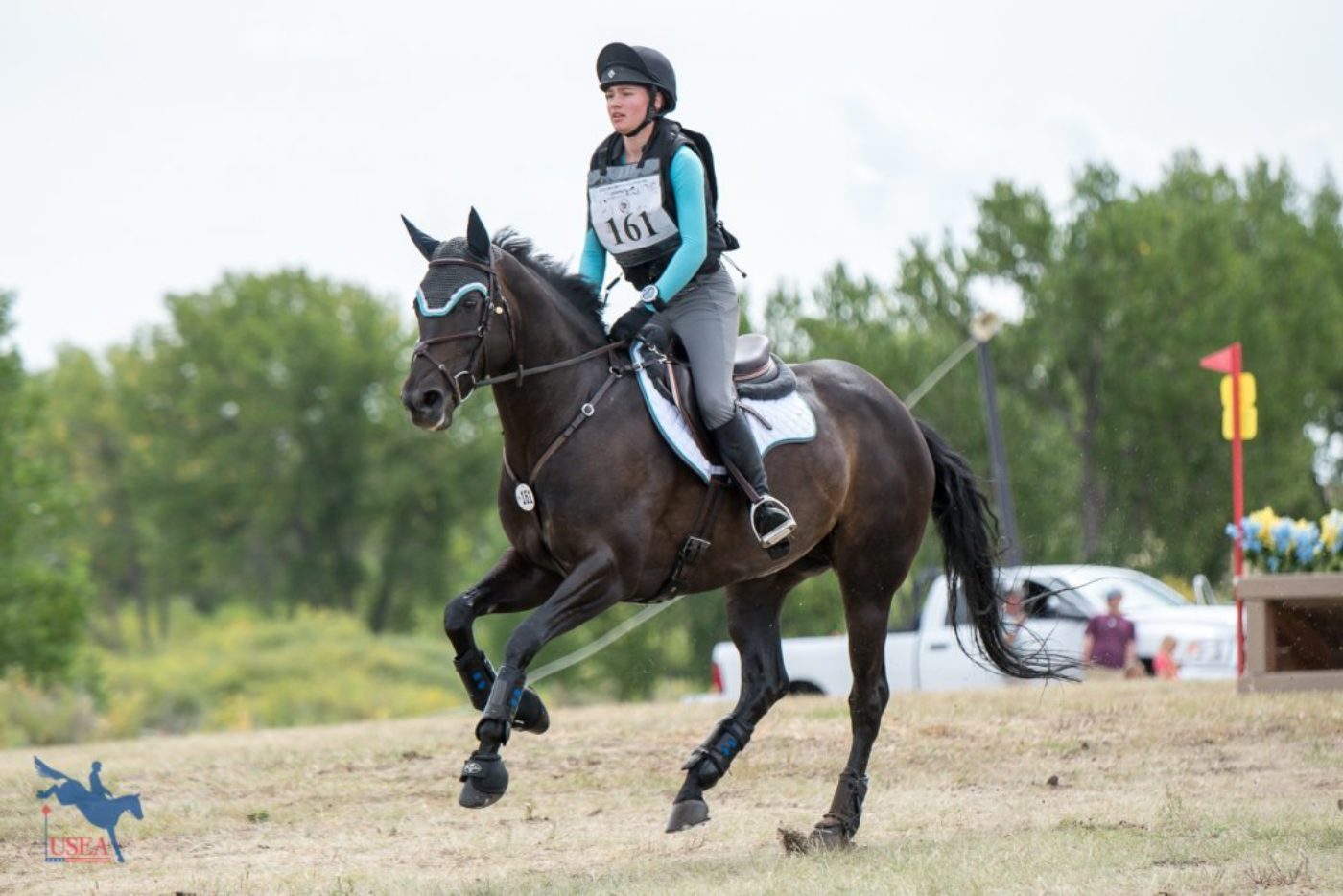 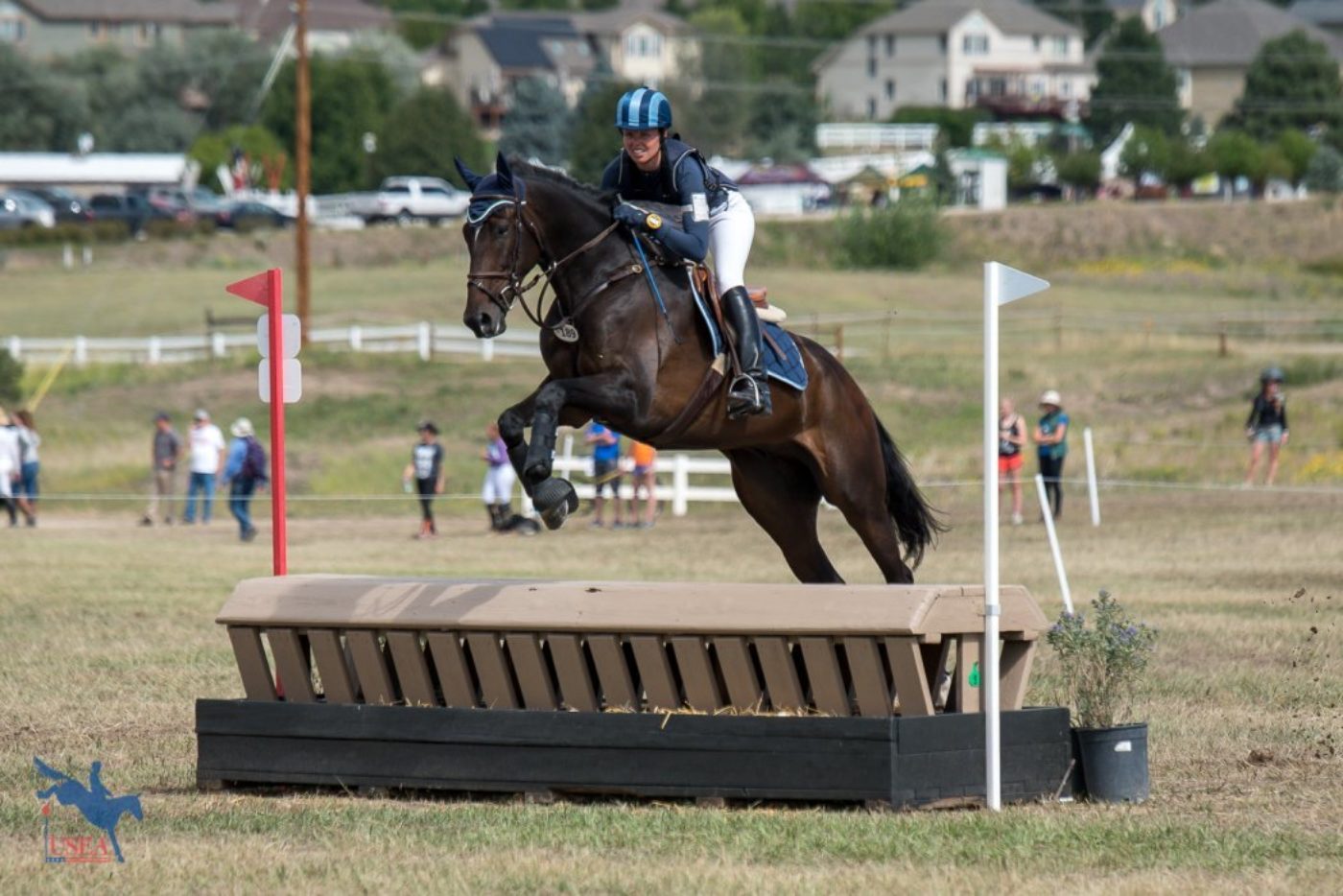 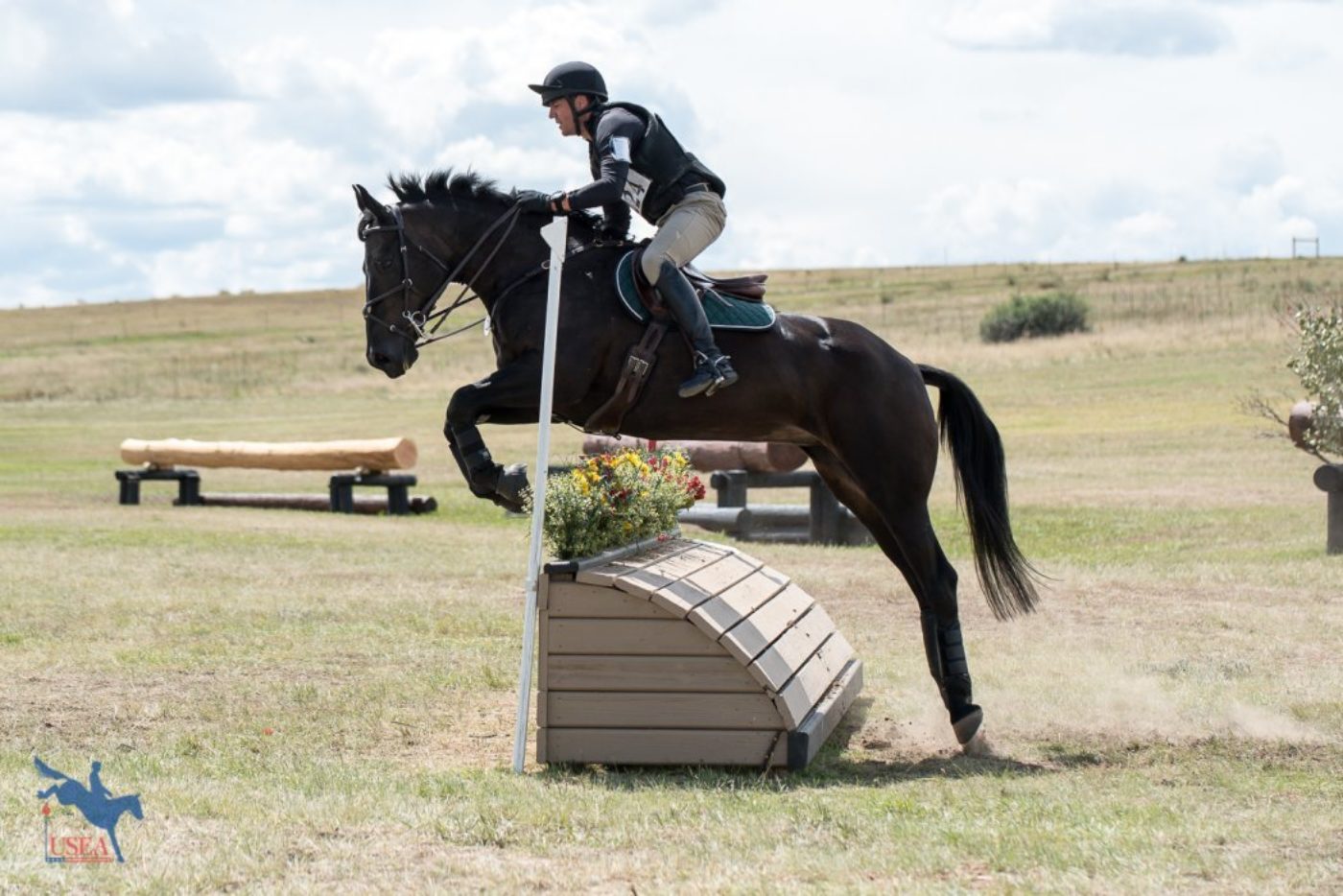 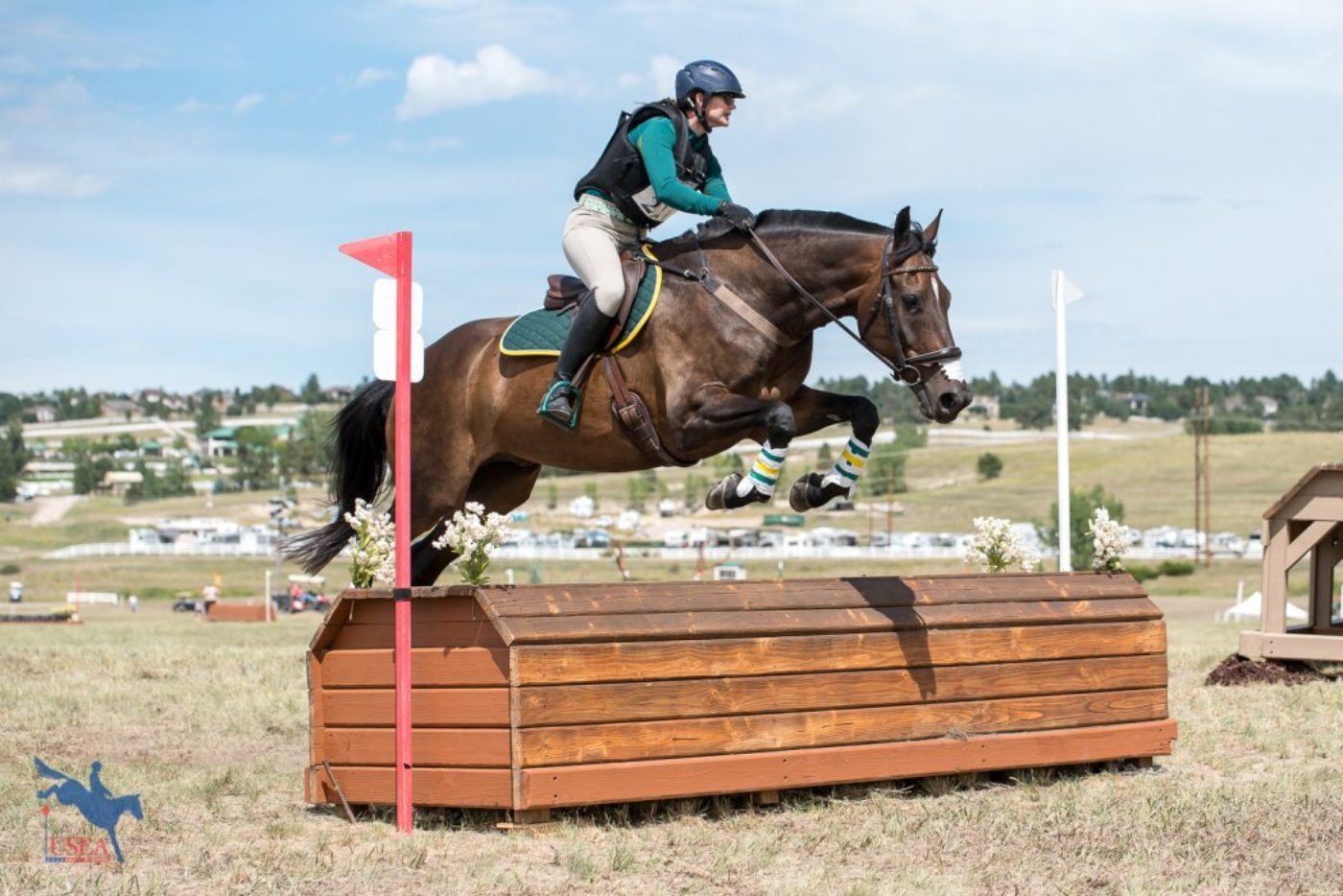 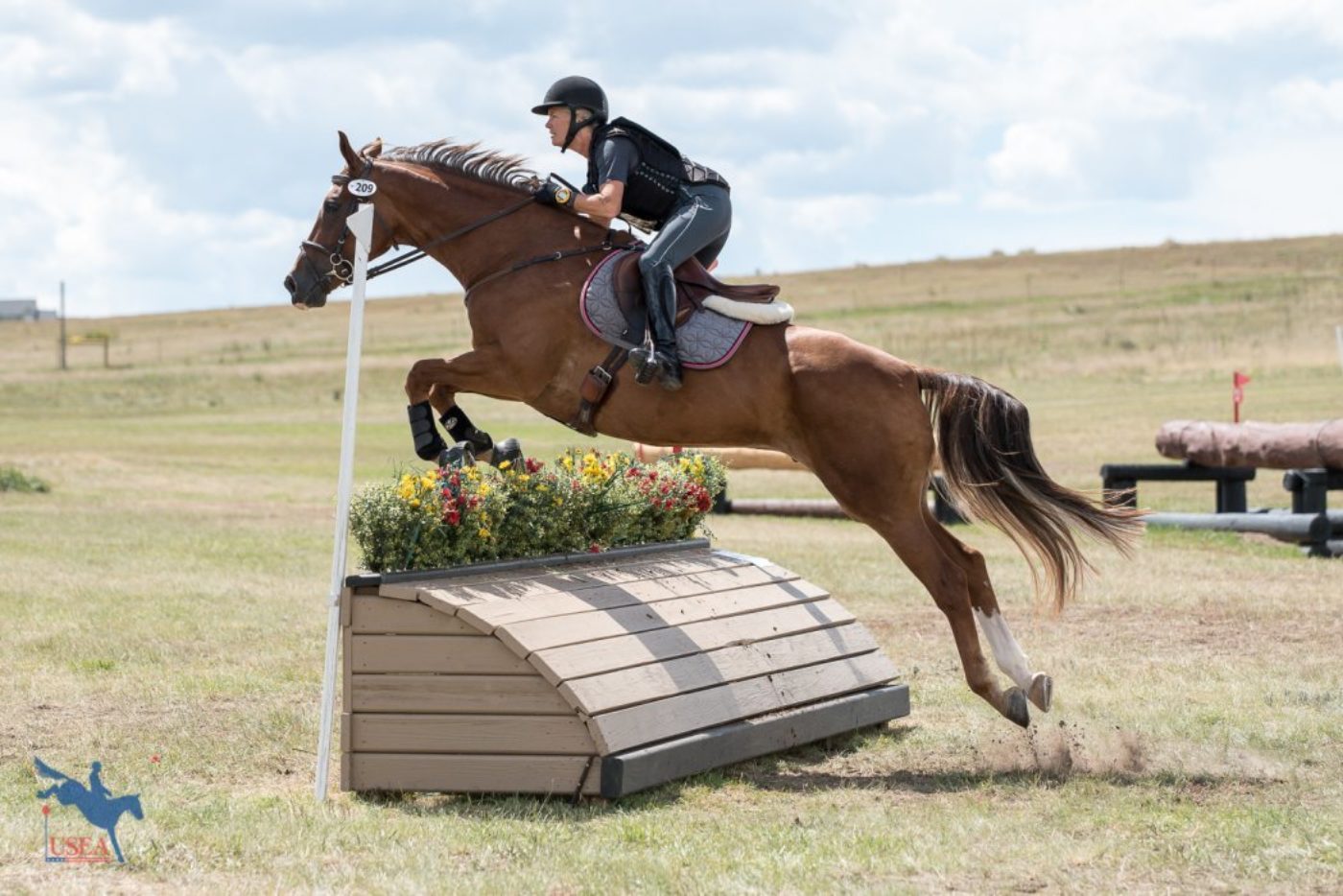 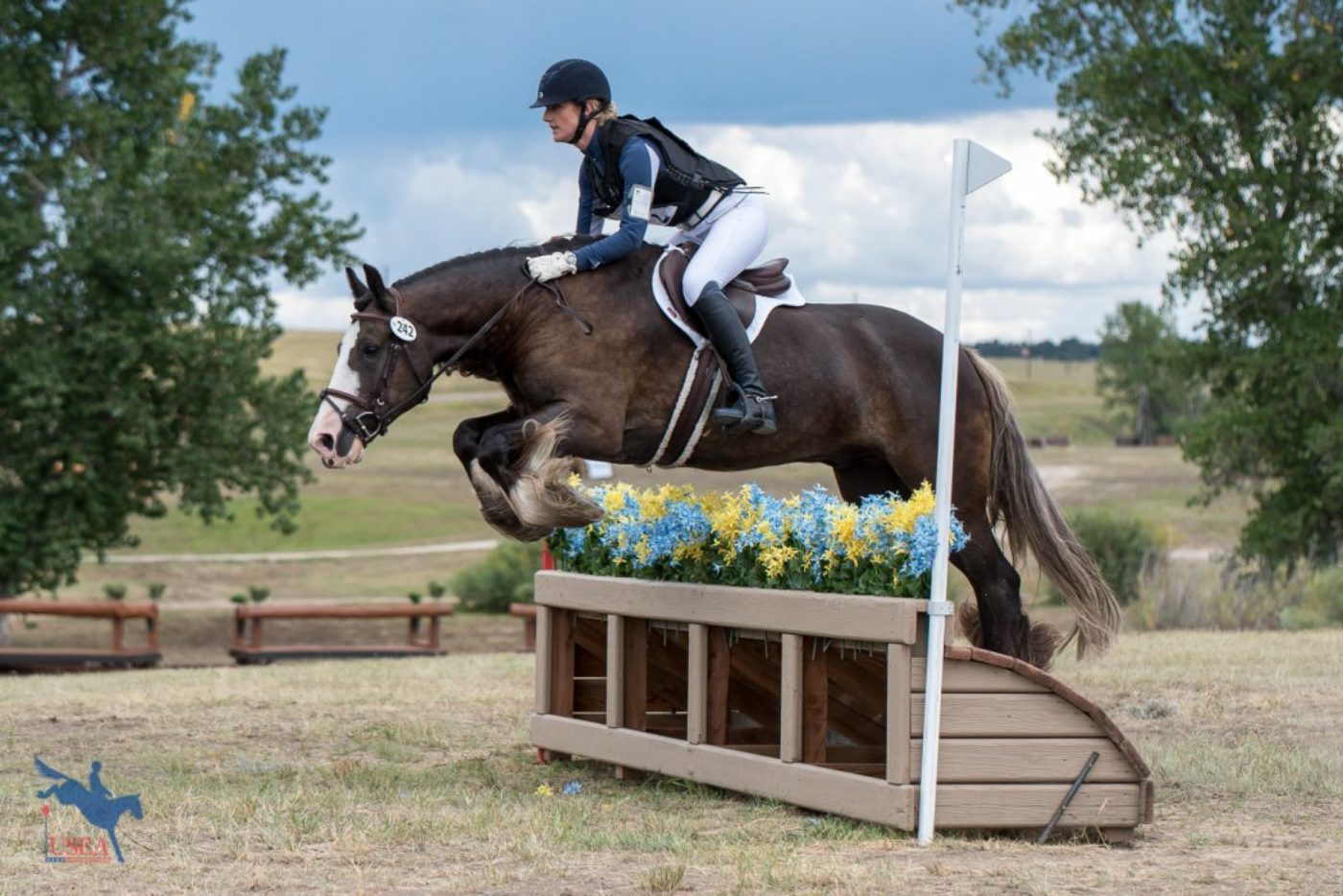