Only one rail separates the top 13 pairs in the Adequan USEA Gold Cup CIC3* at the Carolina International CIC and Horse Trials in Raeford, N.C., but overnight leader, Liz Halliday-Sharp thinks it should be more. “I actually thought that Blackie deserved a better score,” said Halliday-Sharp of her 15-year-old Irish Sport Horse gelding, Fernhill By Night (Radolin x Argentina XII), "but I am just being very greedy.”

The FEI removed the coefficient for dressage this year “to address risk management issues through rebalancing the importance of cross-country skills.” The new system lessens the emphasis on the phase, but it increases the competition as evidenced by the tight bunch of scores today. Eighty-five percent of the field scored between 27.0 and 37.0.

Fernhill By Night may just have a .60 lead over second, but Halliday-Sharp thought he felt great today. “He felt amazing yesterday and I thought ‘oh my gosh this horse is going to be flying.’ He is notoriously a bit lazy and he was lazy in the trot work, normally it is the canter. To be fair to him he was still great. I think that the first medium trot could have been a bit better, but I was really pleased with the rest of it.”

The CIC3* riders don’t head out on cross-country until Saturday, but riders can expect a new feel as Ian Stark’s cross-country track has been reversed this year after several years of running in the same direction. “I am glad it has been flipped around,” said Halliday-Sharp. “I think we sort of all knew our way around and it’s nice that it is the other direction.” For Halliday-Sharp she returns to Carolina year after year partly because of the cross-country. “It is a proper three-star competition,” she continued. “It is challenging to stay up in front. I think the cross-country is a proper track. The time is always tight. The course is always tough and big. I think it is a good event to see where you are at in the season.”

While Fernhill By Night still has two phases ahead of him, Halliday-Sharp is already looking to the rest of the year. “I think he is hitting his prime this year. He feels the best he has ever felt, so hopefully 15 will his year. I don’t have any CCI plans for him – he is just going to do what he is good at (CICs).”

Buck Davidson headed down the CIC3* centerline three times today, and it was Carlevo who came out on top of the trio. Carlevo LLC’s 11-year-old Holsteiner gelding (Eurocommerce Caresino x Ramatuelle) scored a 27.6 for overnight second.

“He’s always pretty consistent,” said Davidson. “I was really happy with him. I feel like he’s a stronger, better horse this year. He’s always been very rideable and quiet, but he’s got a bit more expression now, and he’s much stronger now carrying me through the test.”

Produced through the CIC2* level by Dirk Schrade in Germany, this is the fourth year of Davidson and Carlevo’s partnership. “It always takes more time (to produce a horse) than everybody wants. He’s been in the 30s before in the old scoring system a bunch, so it’s all in there. He’s been doing it for a few years, so now it’s about making everything better rather than just doing it.”

With no rails in hand over third-placed Elinor MacPhail O’Neal and RF Eloquence, Davidson is hoping to improve on last year’s Carolina International CIC3* where Carlevo pulled three rails.

Today was freezing, windy, the nearby Fort Bragg was practicing drills, but that didn’t phase RF Eloquence, Sally Crane’s 13-year-old Holsteiner gelding (Contender x D-Ginger) “I was really happy with [my test],” said O’Neal. “He went to Red Hills, and he was really fresh there, so today I was really happy with him – he kept his cool in the ring. He has always been very good on the flat, so it is just showing him off and getting him to relax.”

O’Neal broke her collarbone last August and RF Eloquence was suffering from some confidence issues, so O’Neal’s husband, Alex, took over the reins and ran him at some two-stars last fall. “He came out this year more confident than ever.” 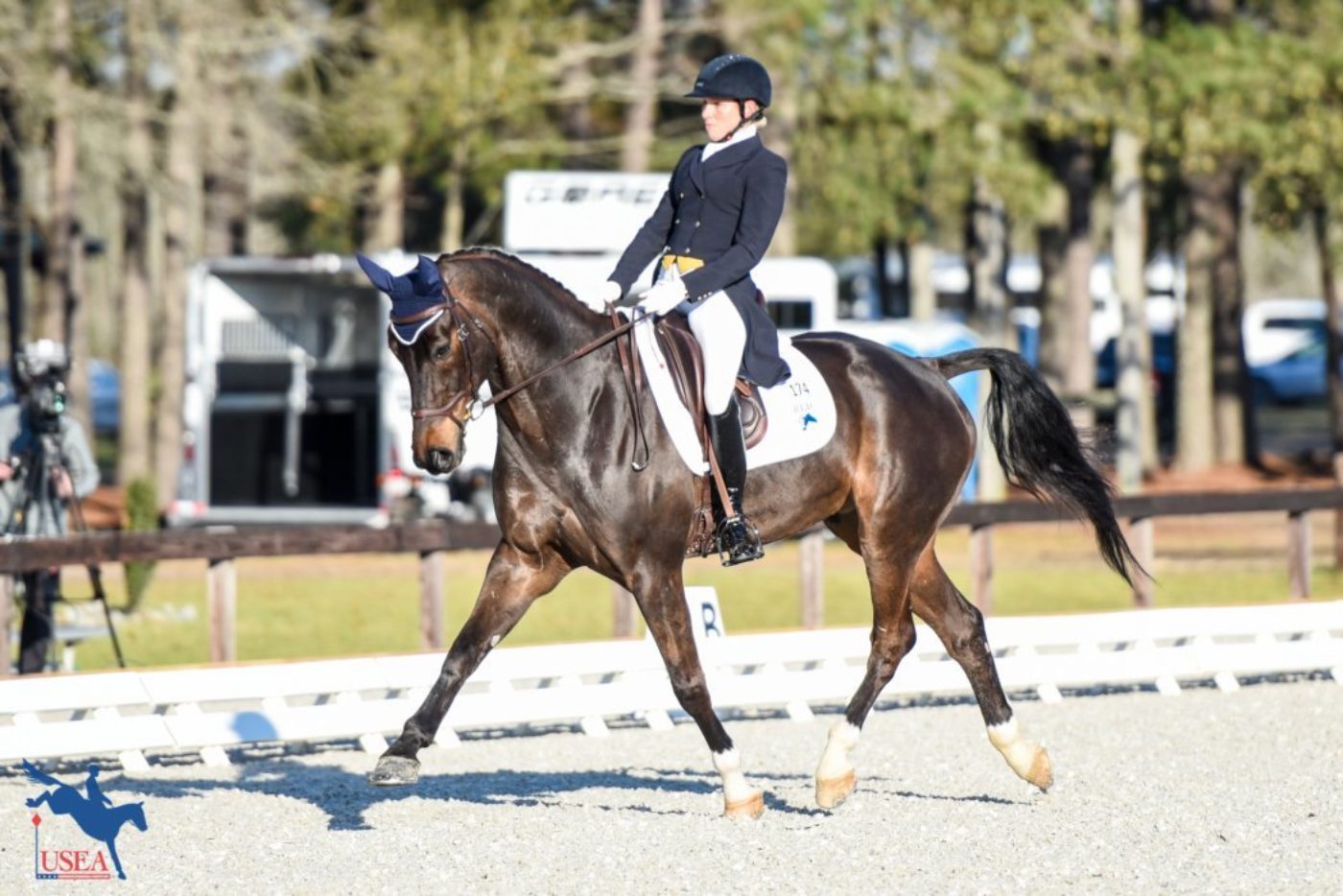 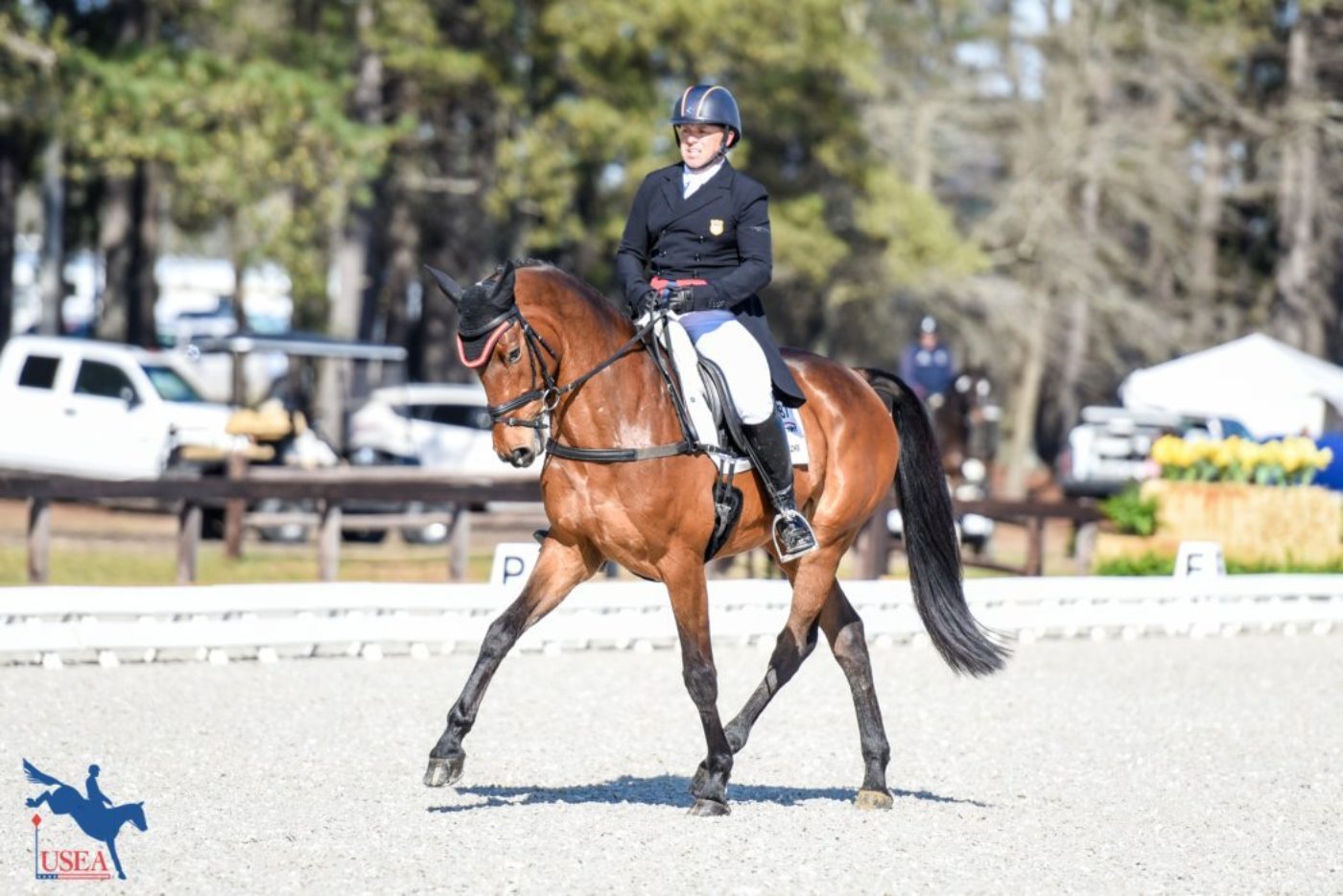 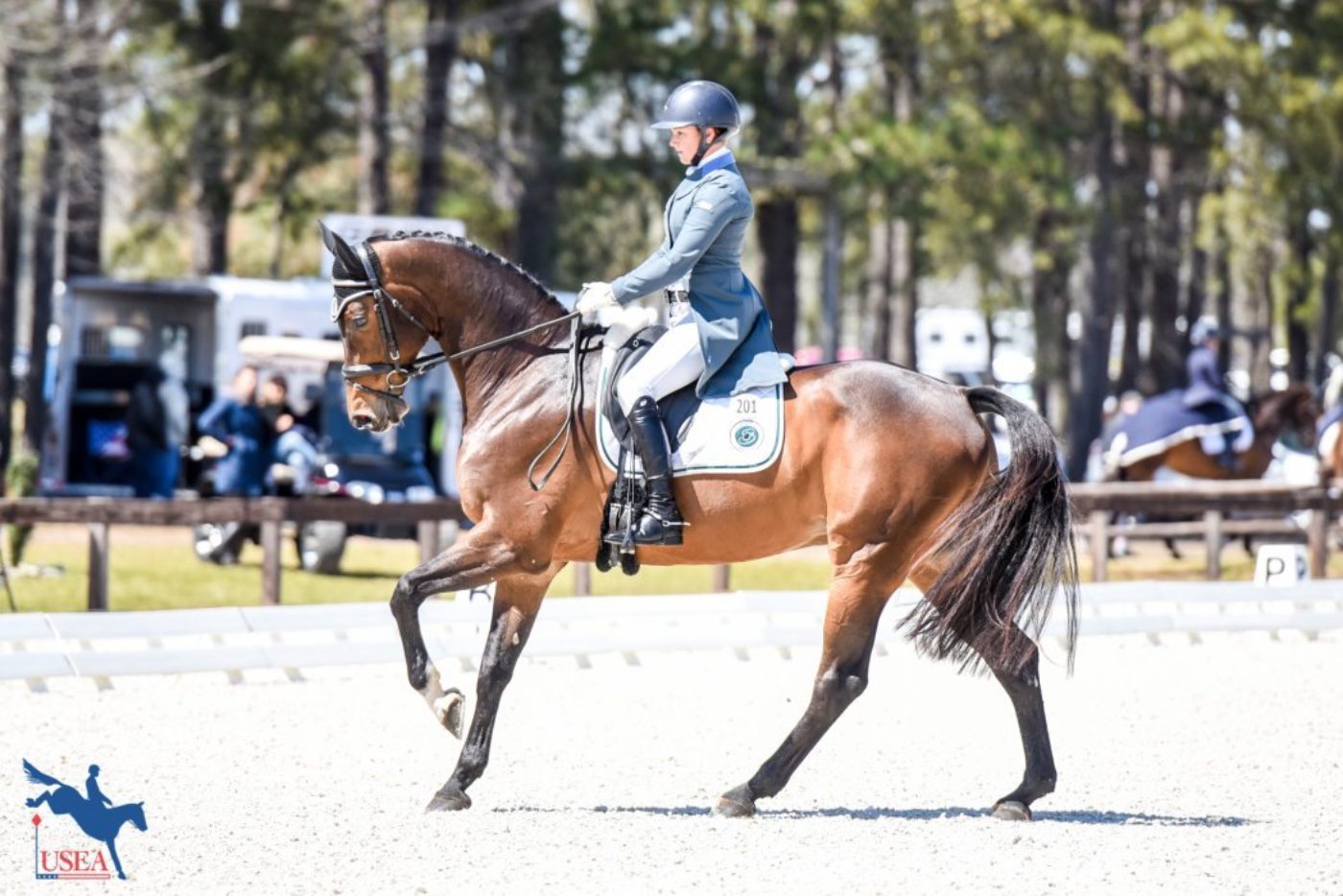 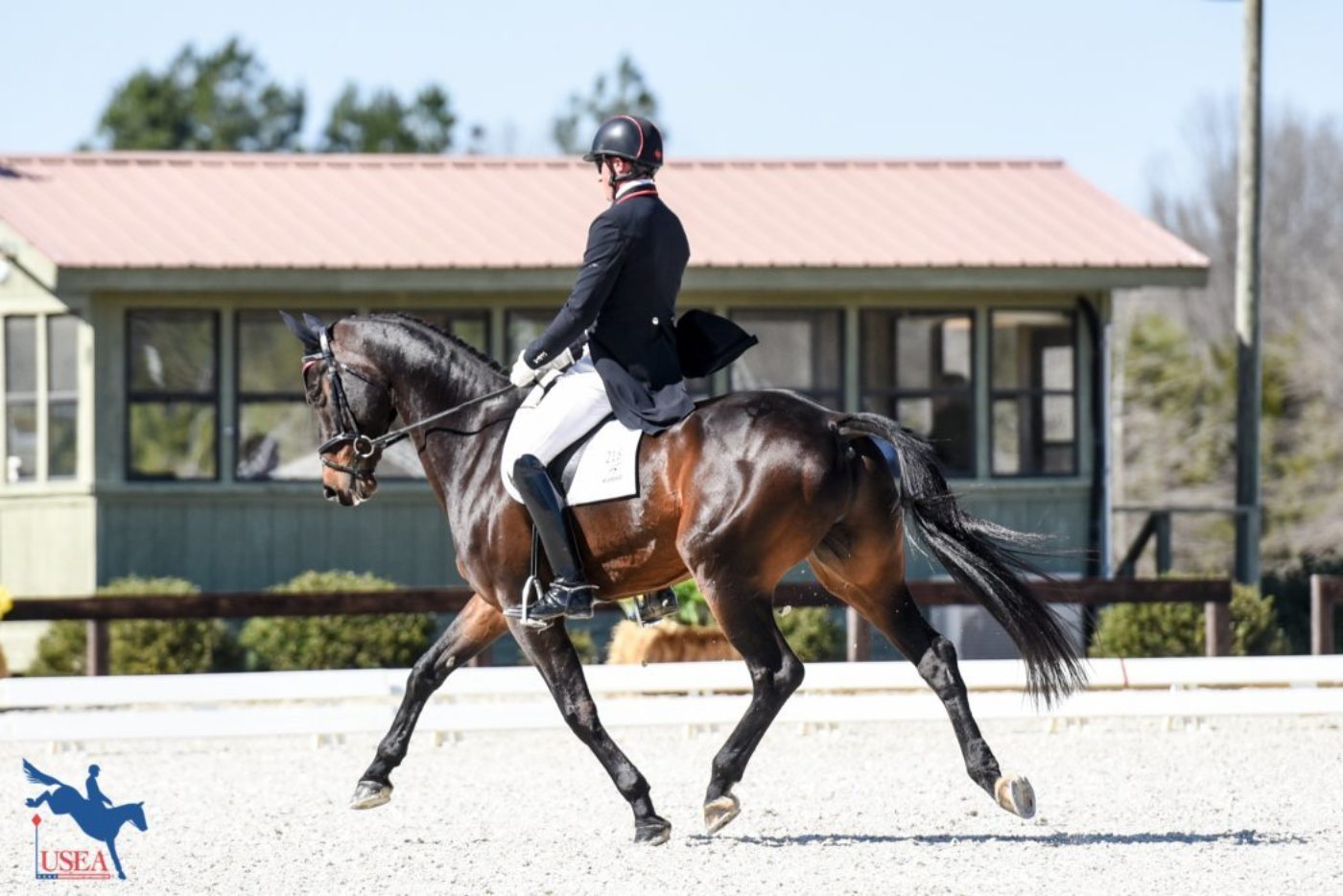 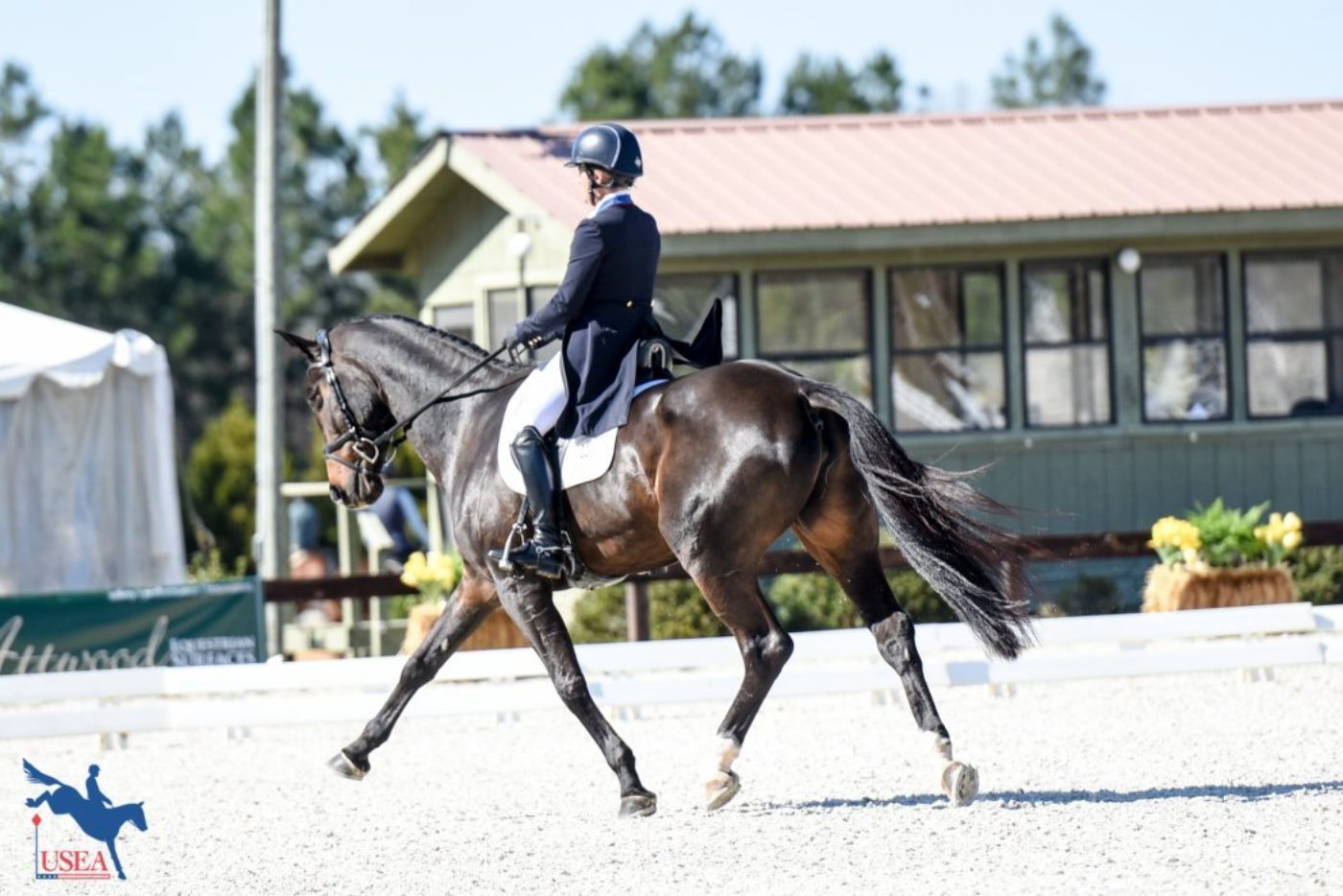 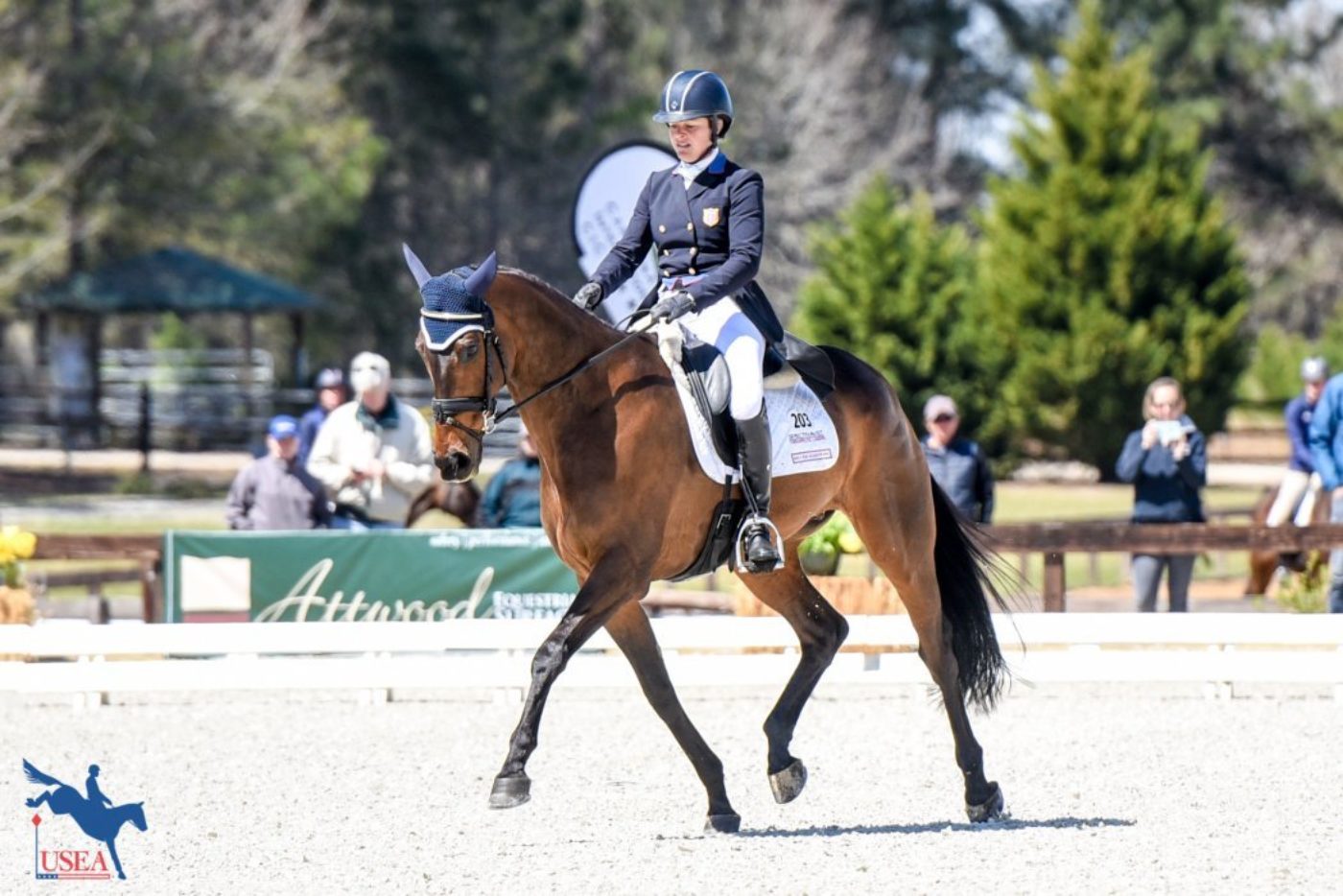 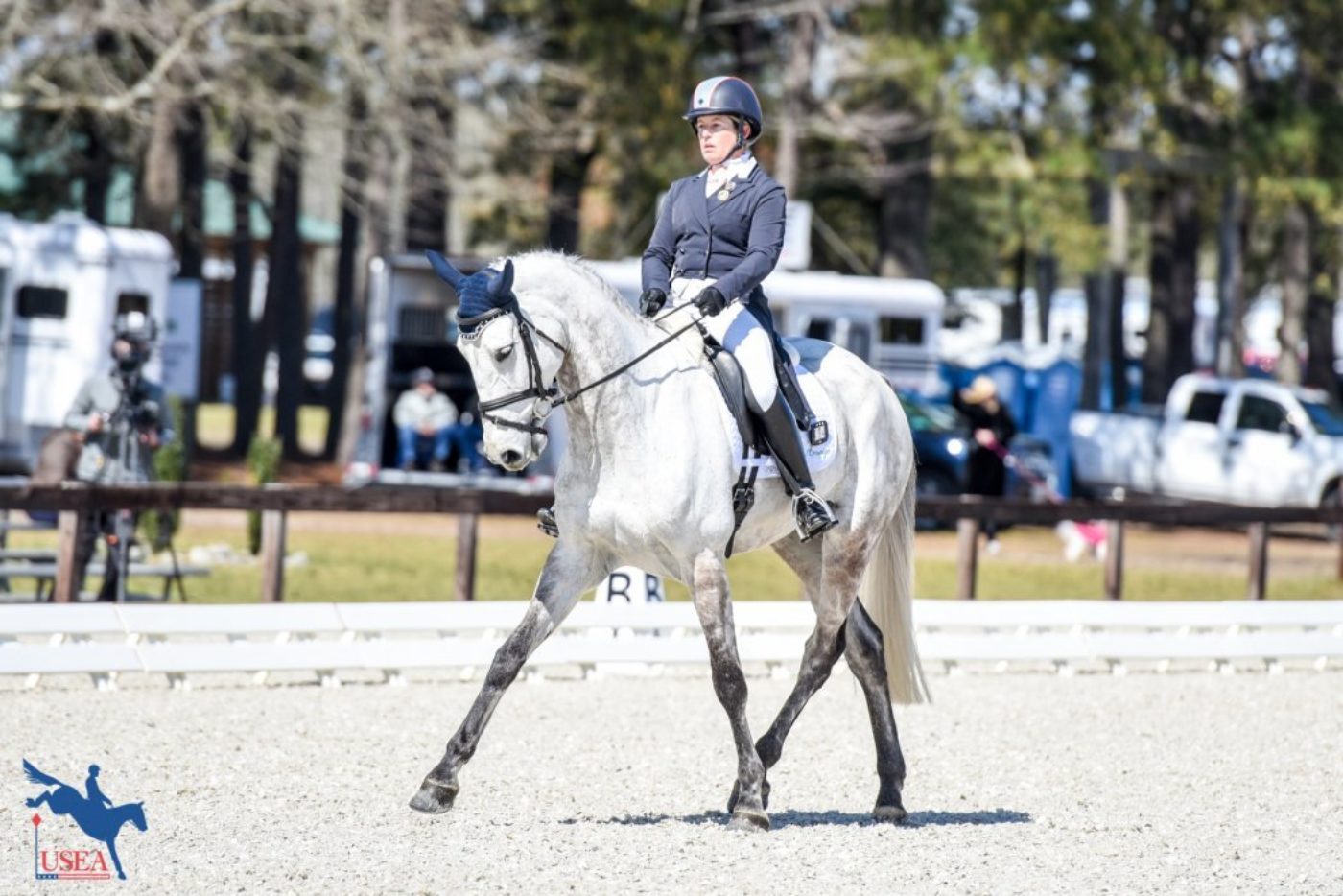 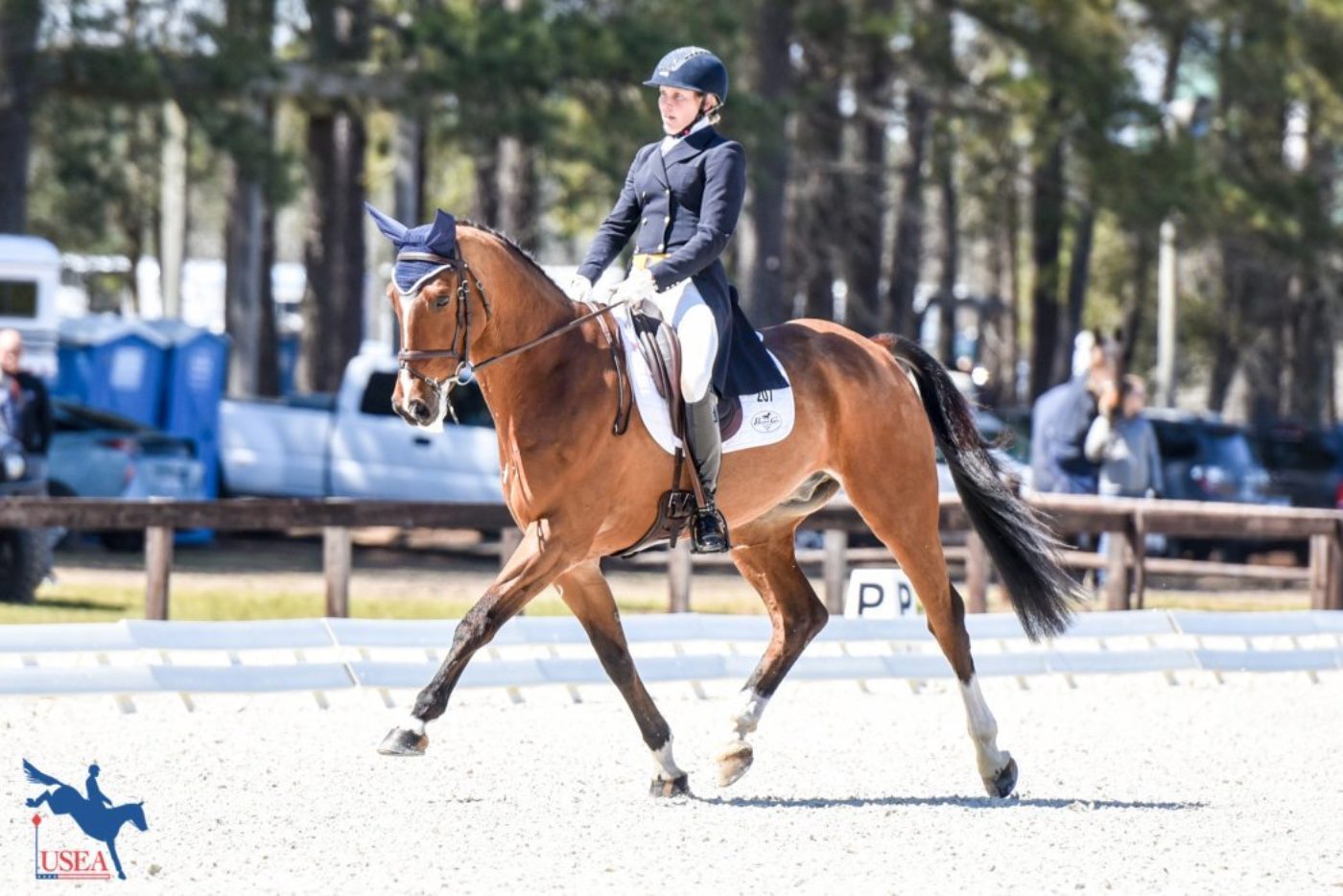 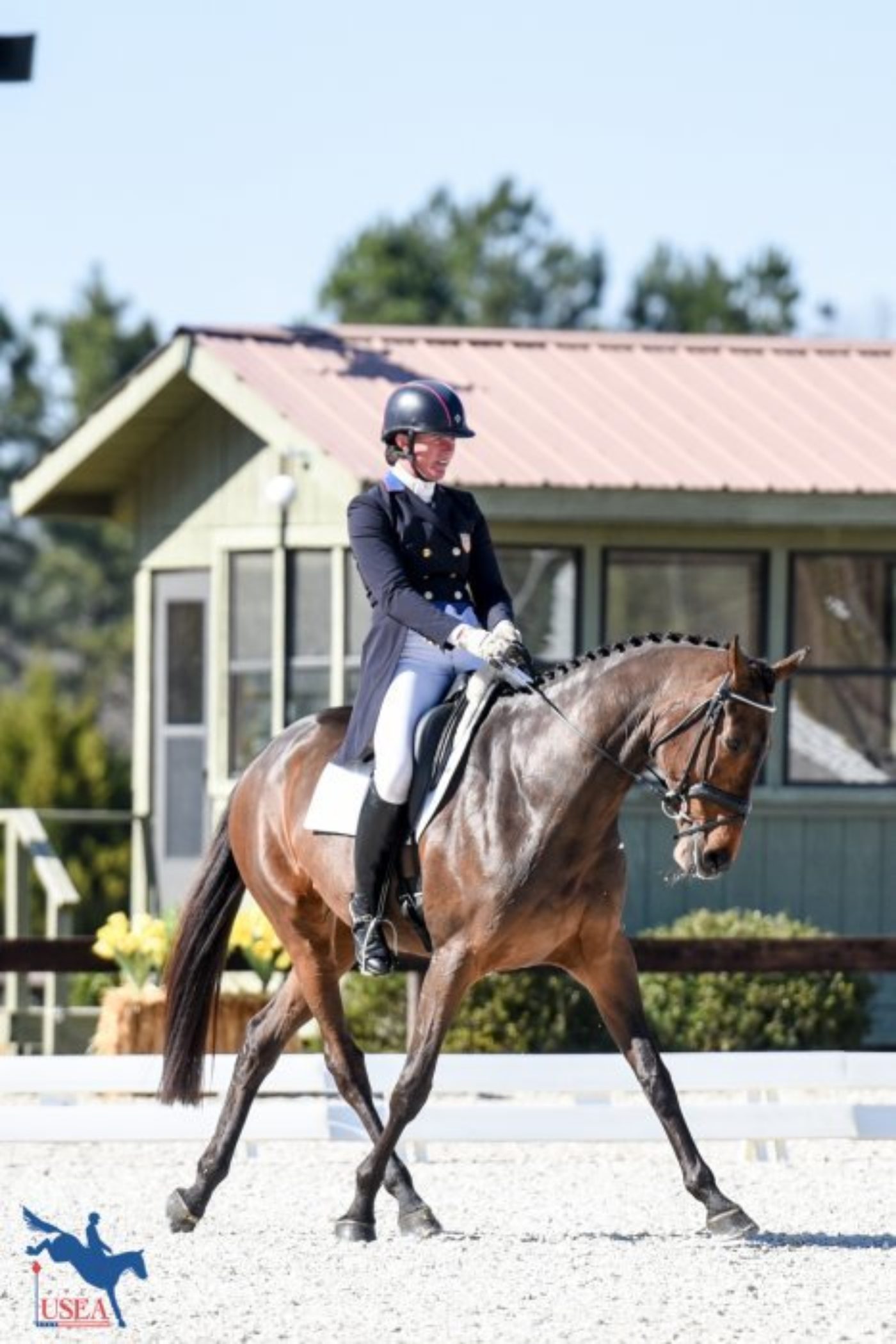 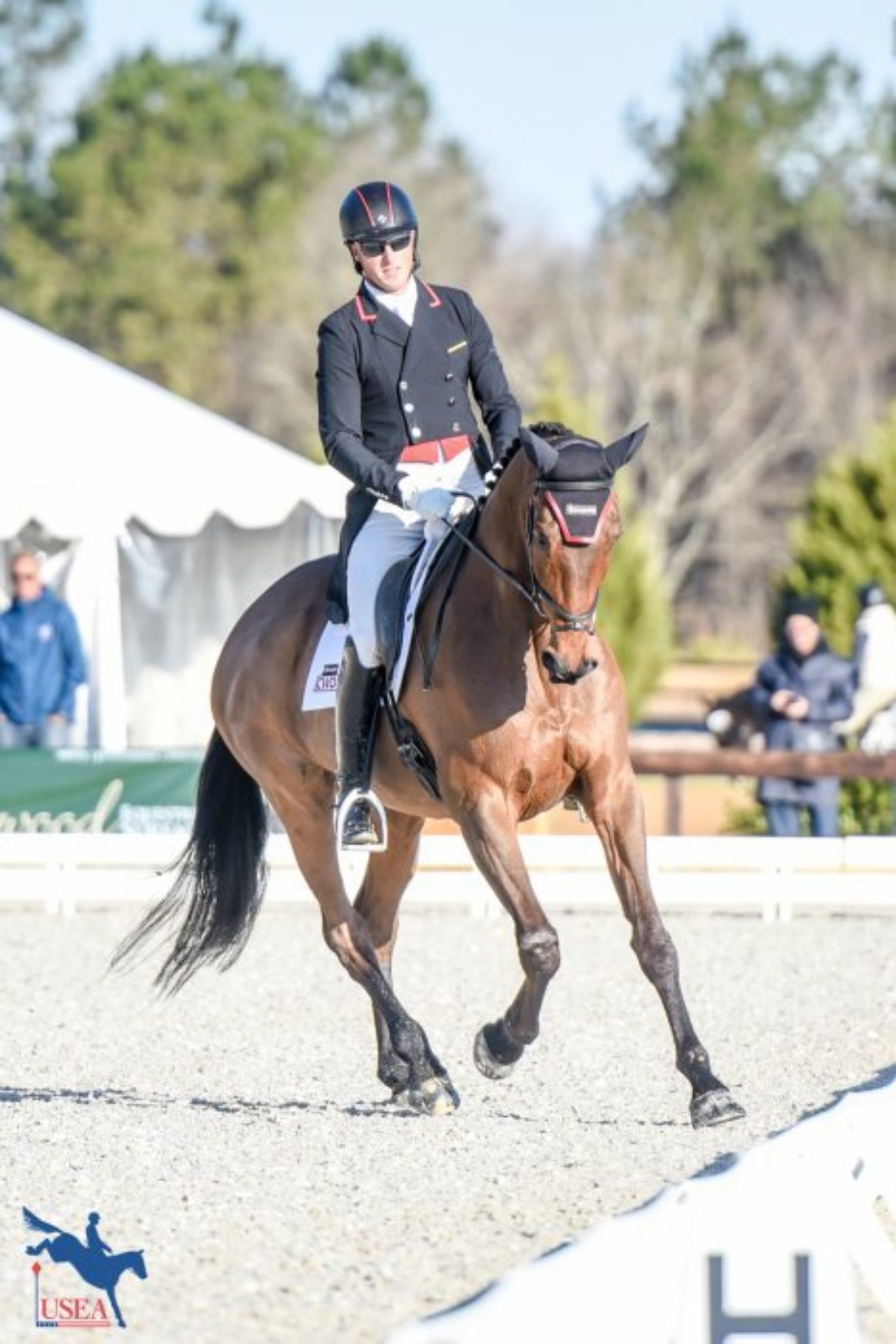 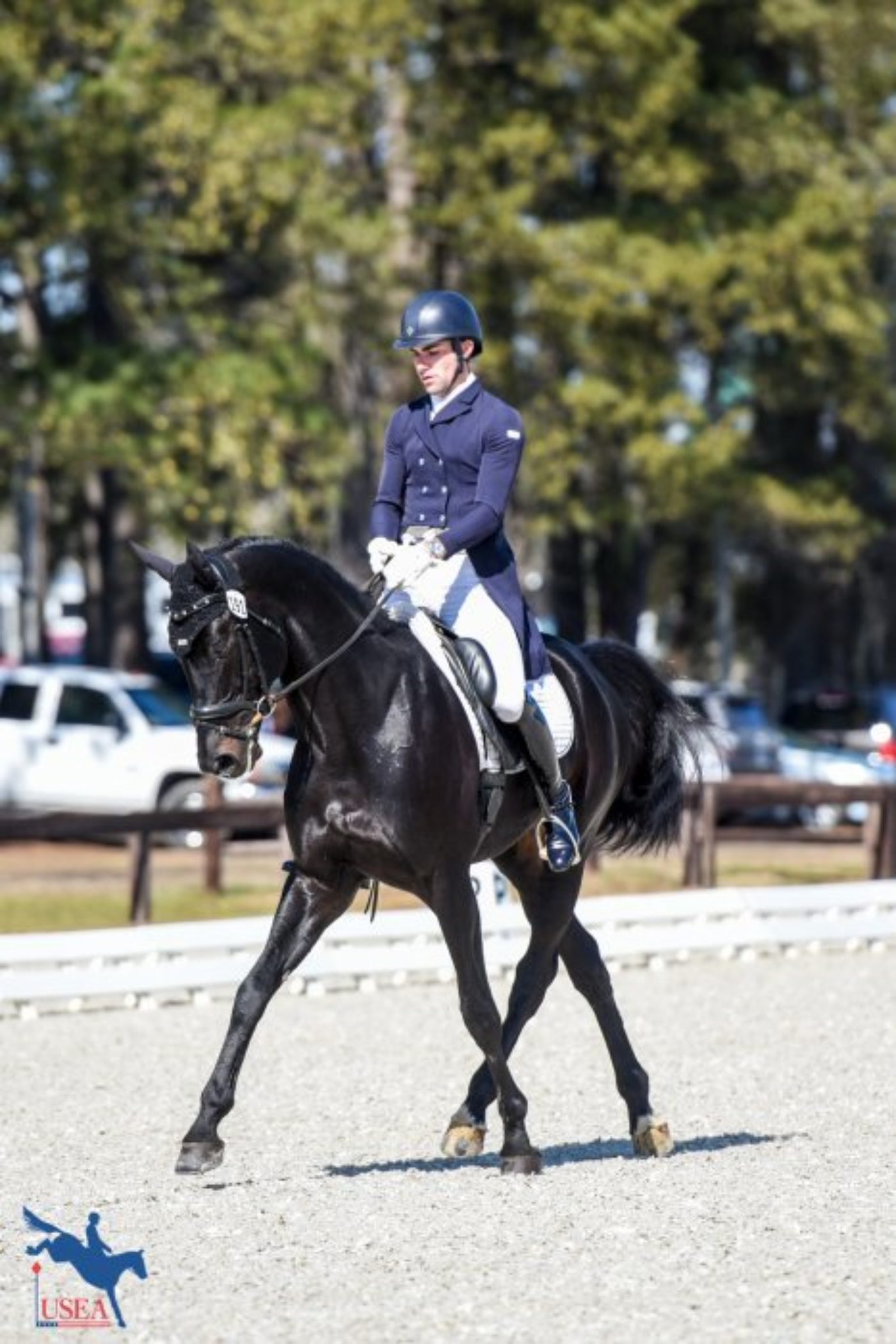