2021 LRK3DE Cross-Country Day Delivers Same Result as 2019 with Townend, Martin, and Price in the Top Three

From snow to sun to rain, this year at Kentucky has featured all four seasons but one thing that remains the same to previous years is the top results. The top three after today are the same three riders who held the exact spots in 2019. Oliver Townend is leading overnight and won in 2019, Boyd Martin is sitting second with On Cue and he finished second in 2019, and Tim Price is third with Xavier Faer, and he finished third with the same horse in 2019.

In a day filled with challenging weather conditions, Derek di Grazia’s five-star track proved to be difficult. There were 45 pairs who crossed the finish line and only four made the time. Kevin McNab and Scuderia 1918 Don Quidam from Australia were the first to do so by finishing bang on the optimum time of 11 minutes. Then Harry Meade and Superstition from Great Britain crossed at 10 minutes and 54 seconds which was the exact same time as the third pair Price and Xavier Faer. Jonelle Price also joined the double clear club with Classic Moet finishing in 10 minutes and 55 seconds.

Townend said of the course, “It’s right up there with one of the toughest five-stars in the world. From a technicality point of view, this is the toughest you are going to get.” Boyd Martin added, “I’ve been competing here for over a decade and this is one of the hardest cross-country courses designed here.” However, as difficult as it proved to be, the percentage of horses that jumped clear was 66 percent. The typical worldwide average of horses jumping clear in a five-star is 55 percent, which means making time was the deciding factor.

“We often think in England, that Kentucky is a flat track but that is completely wrong. Today was one of the toughest cross-country courses,” said Townend. Despite the difficulty, Townend proved today why he’s ranked the number one event rider in the world on the FEI rankings. He had two horses come through the finish flags - the defending two-time Kentucky champion, Cooley Master Class added 6.4 time penalties, and Ballaghmor Class (Courage II x Kilderry Place) a 14-year-old Irish Sport Horse gelding owned by Karyn Shuter, Angela Hislop, and Val Ryan added only 0.8 time penalties to take over the lead going into tomorrow.

“They gave me their heart and soul today. I was surprised by the ground on my first ride. I thought it rode more testing than it walked. He lost a back shoe early on, he slipped and slid, but at the same time he did what good horses do and dug deep,” said Townend of his first ride with Cooley Master Class who dropped a couple of spots down to eighth.

Townend’s second ride, Ballaghmor Class also lost a shoe early on course. “The shoes were welded on before we left the barn, but we lost a front shoe at the third part of fence 7. But, he is an unbelievable cross-country machine. I thought he showed his tenacity, his strength, and complete robustness for the sport. With a shoe, he could have been 15-20 seconds within the time. Every stride we slipped. It was rough and tumble, and I was just trying to keep him on his feet,” said Townend.

“I didn’t have the most confident start to the day. I had to go back to the stable and regroup, but she’s a lovely horse,” said Martin when reflecting on his day that had both success and heartbreak. While two of Martin’s rides didn’t go according to plan it was On Cue (Cabri de Elle x On High) a 16-year-old Anglo European mare owned by the Turner family who pulled through.

It was the mare’s first five-star and she only added 0.8 time penalties to her dressage score to move up from seventh to second. “On Cue is such a class animal, she’s a real trier, she’s a great galloper and she’s got a heart of gold, so I was just thrilled with her round. I was surprised she got a little bit tired early, but she’s just a fighter and she kept digging deep, and she sort of got a second wind after the quarry. I think I was pretty close to the time, but just missed it,” said Martin

“One thing I’ve learned by watching guys like Tim and Oliver is that you’ve got to go for it,” said Martin - and Martin who placed second at Kentucky in 2019 is primed to finish again in a top spot this year.

The number two event rider in the world in the FEI rankings, Price has two horses in the top 10 going into tomorrow’s show jumping. His first ride out of the start box was Bango who only added 1.2 time penalties to his dressage score, and Price’s second ride, Xavier Faer came in at 10 minutes and 54 seconds to be only one of four pairs to finish double clear. Price shared the day of double clear rounds with his wife Jonelle Price who added nothing to her dressage score with her Badminton champion, Classic Moet.

“I had the advantage of seeing quite a few go before [my third-placed ride on Xavier Faer],” said Price of the 14-year-old British Sport Horse gelding (Catherston Liberator x Faerie Dazzler) owned and bred by Trisha Rickards. “The ride was very smooth. He has a few skeletons in his closet such as ditches so normally, he would lose focus but today he wasn’t like that. He was really on his job, making my job easier. He’s a great galloping horse.”

“It’s good to be back,” said Price when talking about his return to Kentucky. Team Price brought five horses to Kentucky (three for Jonelle and two for Tim) and they all jumped clear - two had double clear round and the three others added a combined total of only 9.6 time penalties.

The inaugural CCI4*S took place in the afternoon while the rain was at its worst. The first ride was at 1:45 p.m. and the last ride of the day was Tamra Smith and En Vogue who hold onto their lead going into tomorrow’s show jumping. “It rode very tough and big but with En Vogue, it was a blast,” said Smith.

The CCI4*-S had a total of 41 horses leave the start box and only 22 came through the finish flags. Out of the 22 that finished, no one made the time, and eight had at least one runout or refusal on course.

Smith and En Vogue (Earl x Laurena) a 16-year old Hanoverian mare owned by Ruth Bley made light work of the challenging course and only added 9.6 time penalties to secure her lead with a score of 35.0. “En Vogue was a star. She came out like a beast. She was so quick on her feet, and it was really fun. I’m hoping to have a good result at Jersey [in the CCI4*-L] and then take her on to the Maryland 5-star,” said Smith.

Sitting second overnight in the CCI4*-S is Alyssa Phillips and her 12-year-old Holsteiner gelding, Oskar (Coriando x Nicole) who came in on the fastest time and only added 5.6 time penalties to their dressage score. Phillips said, "he fought really hard for me. It's the hardest course I personally have ridden. (Oskar) is not all that experienced at the level. He's gone around a couple of four-stars but this is the toughest he's ever seen. He really fought for me at all those combinations. It wasn't easy, it rode super hard. Jennie Brannigan, my trainer, gave me some words of wisdom out of the start box so I just rode aggressively, and I didn't pull.”

Phillips credited her successful round to Brannigan. "I couldn't do it without her," said Phillips.

Rounding out the top three after cross-country in the CCI4*-S is Colleen Loach on Vermont, a 9-year-old Hanoverian gelding (Van Helsing x Hauptstutbuch Hollywood) owned by Peter Barry. The pair jumped clear and added 14.8 time penalties to their dressage score to have a score of 41.8 going into tomorrow’s show jumping. 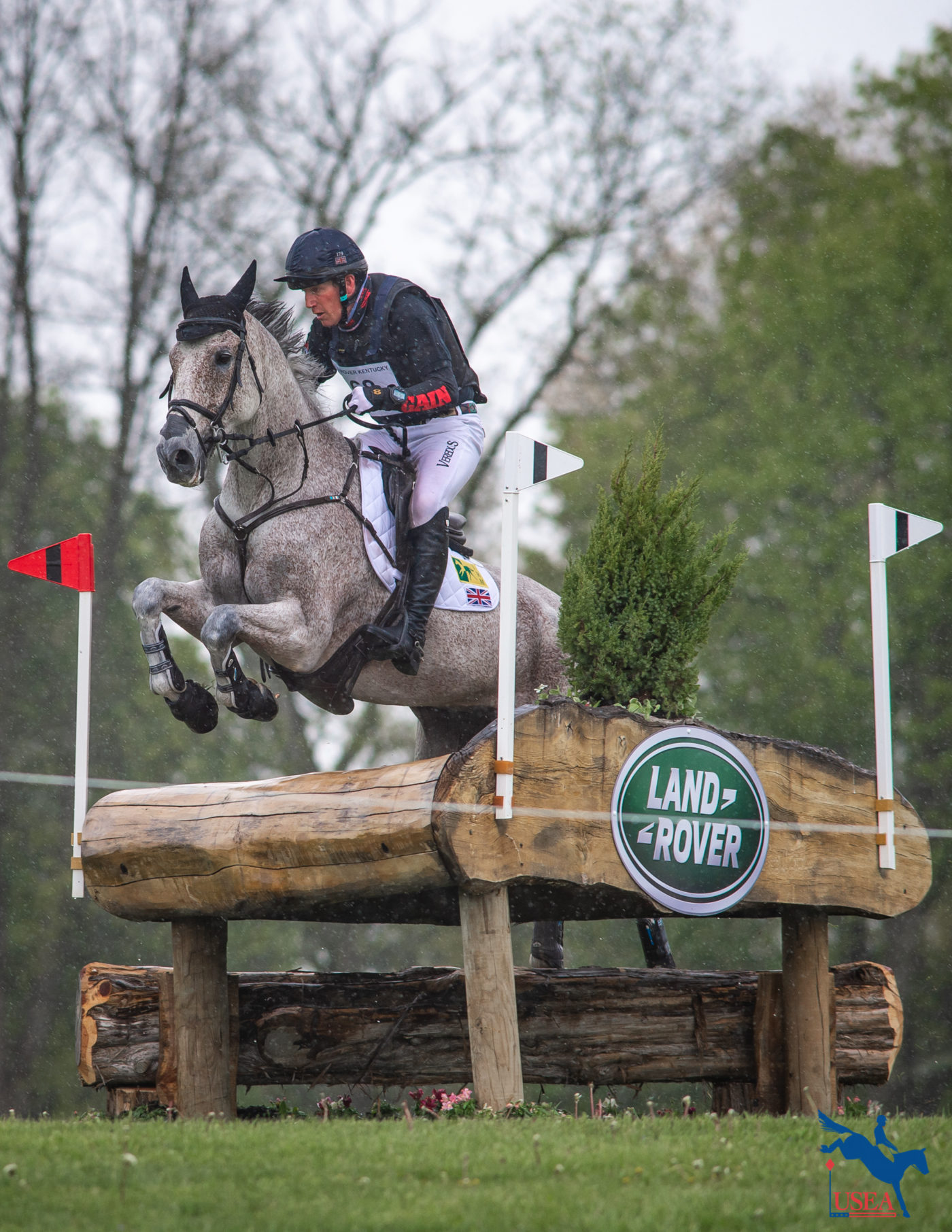 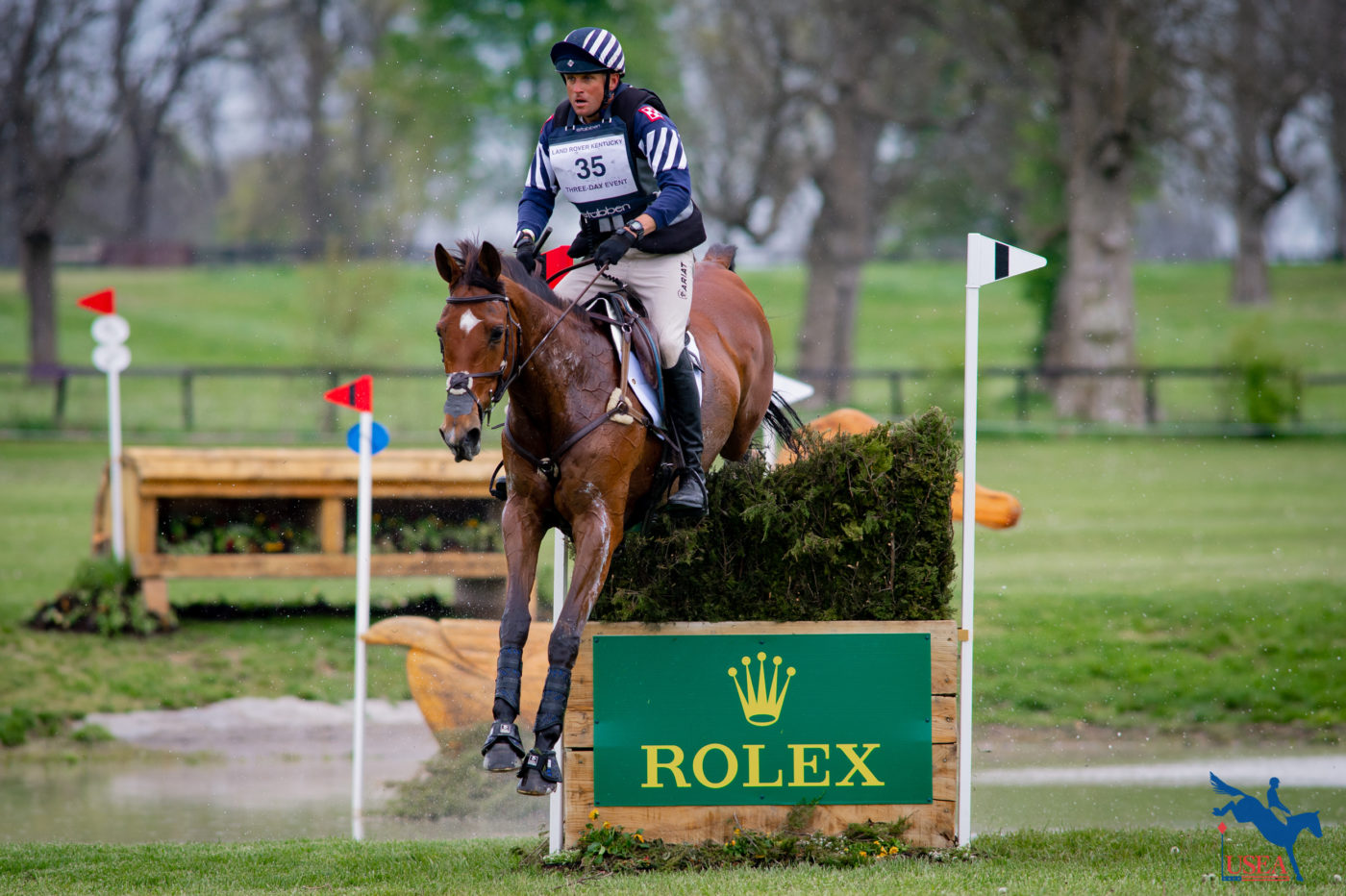 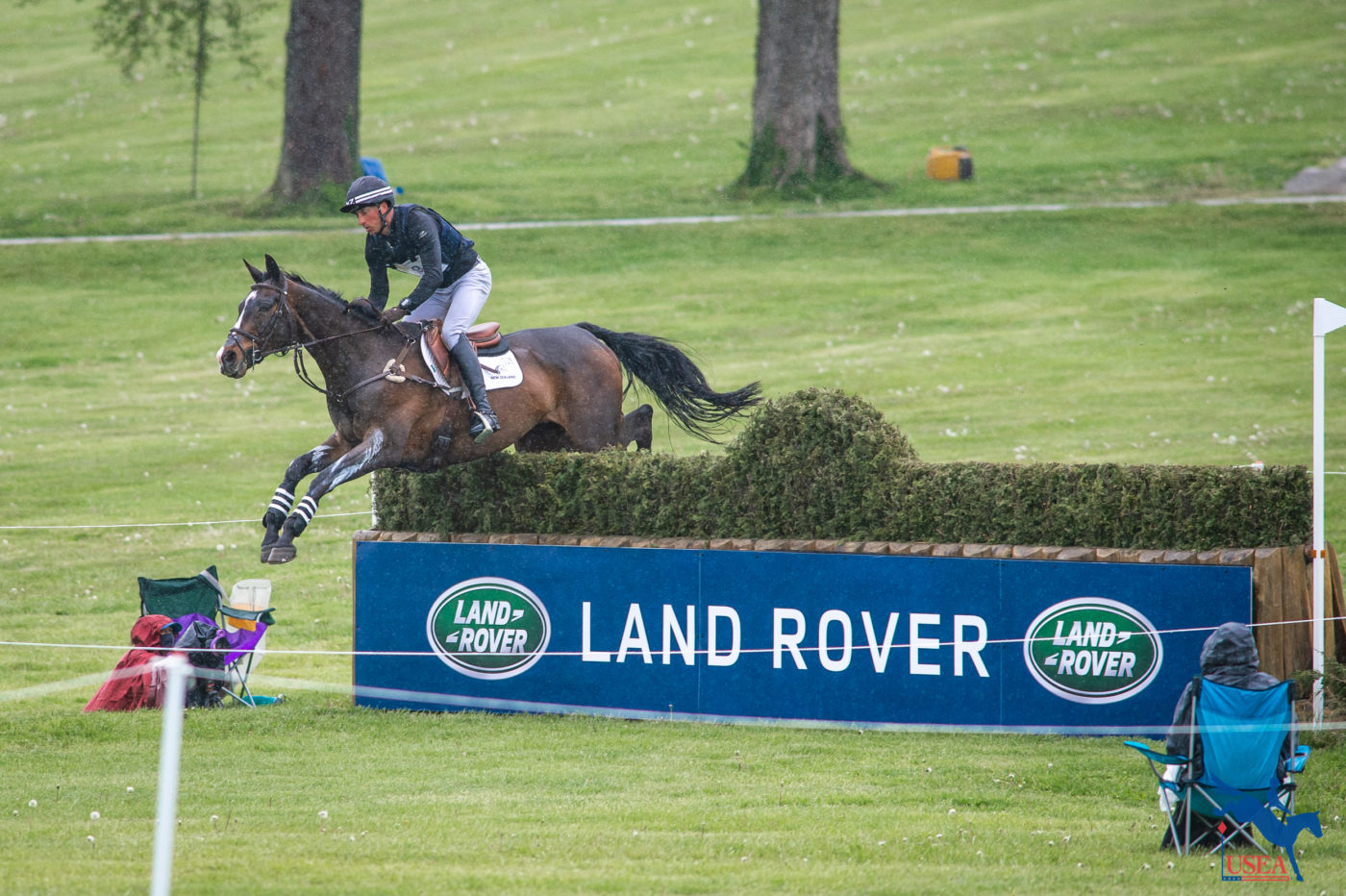 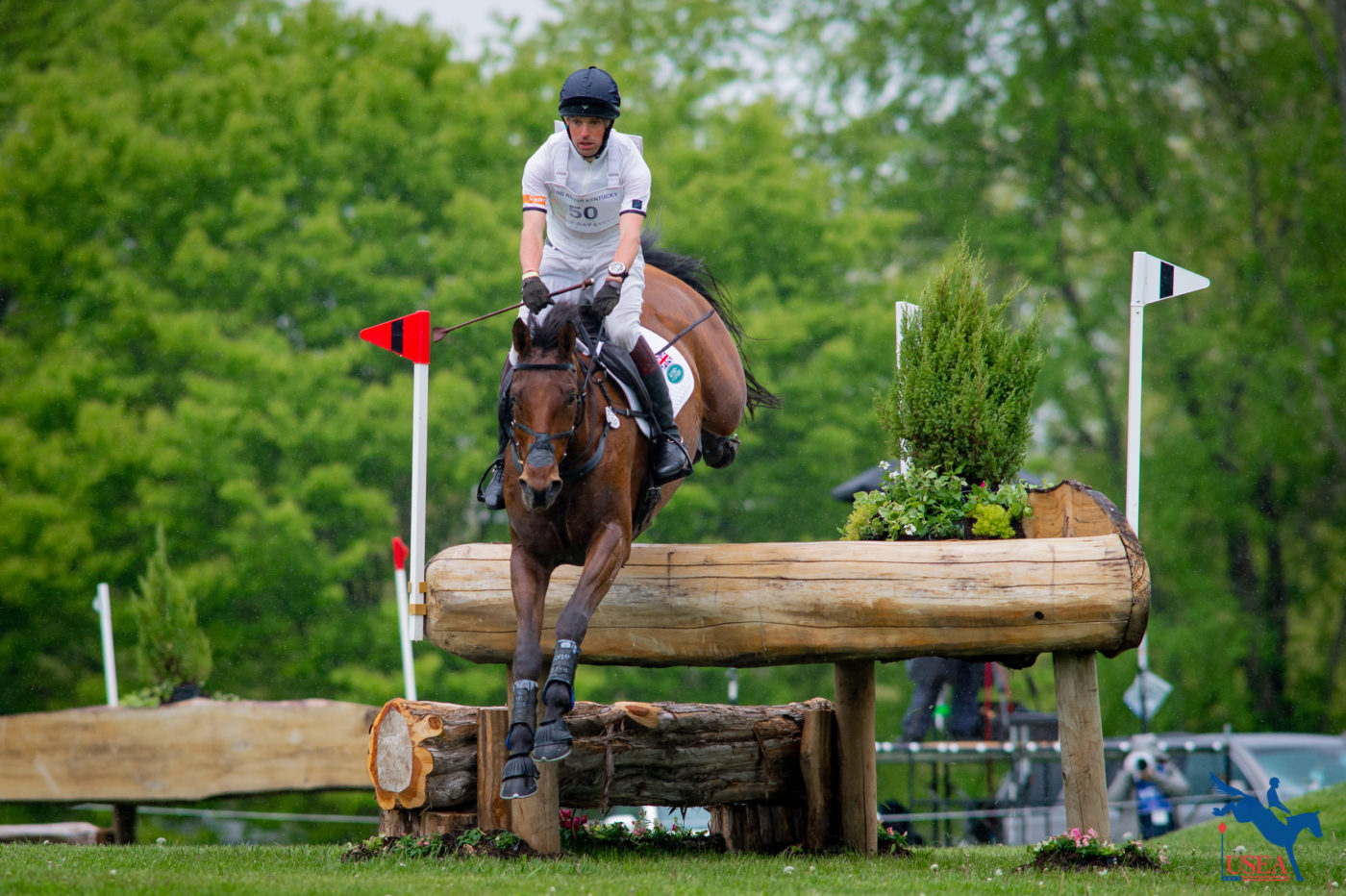 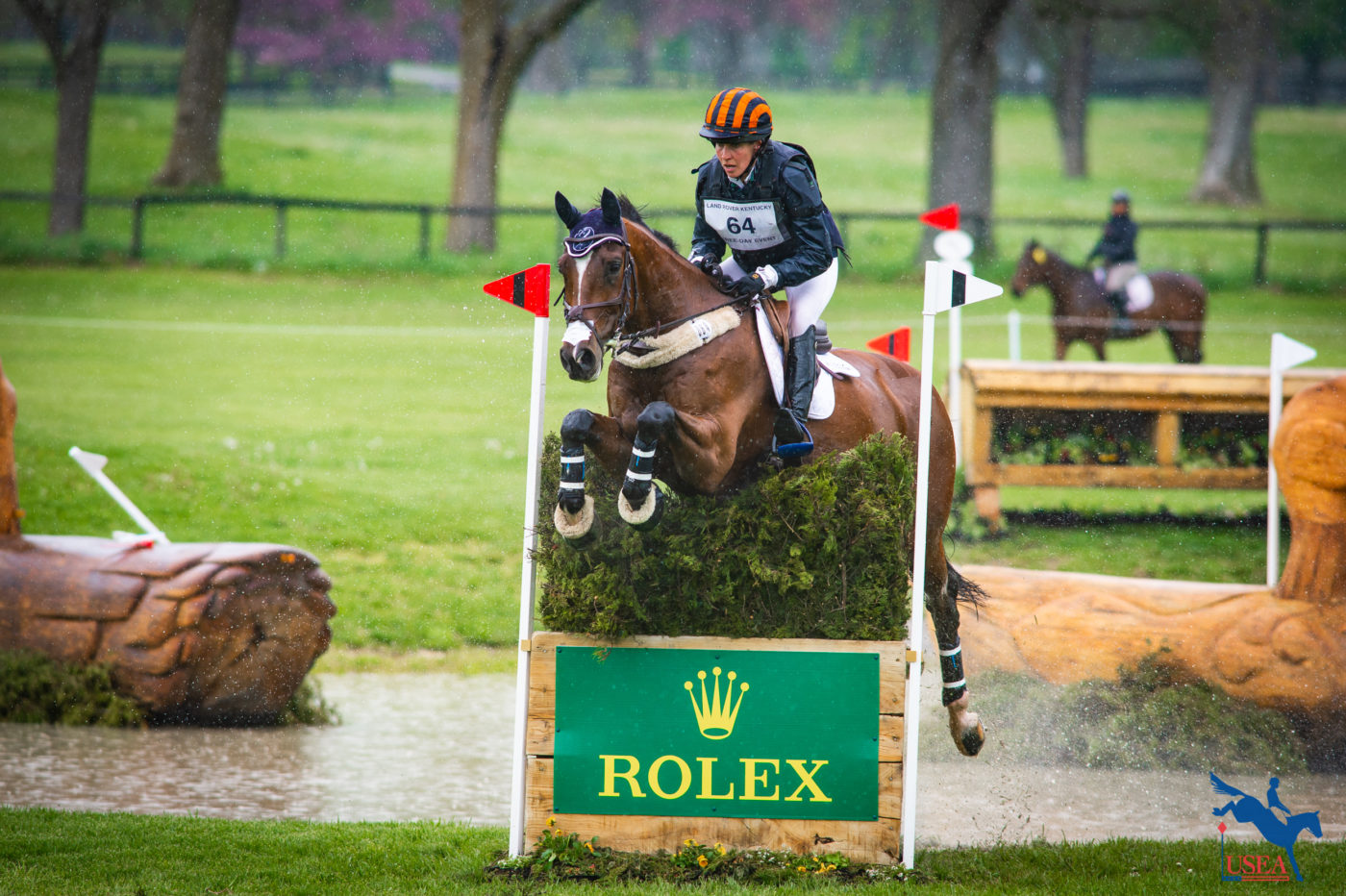 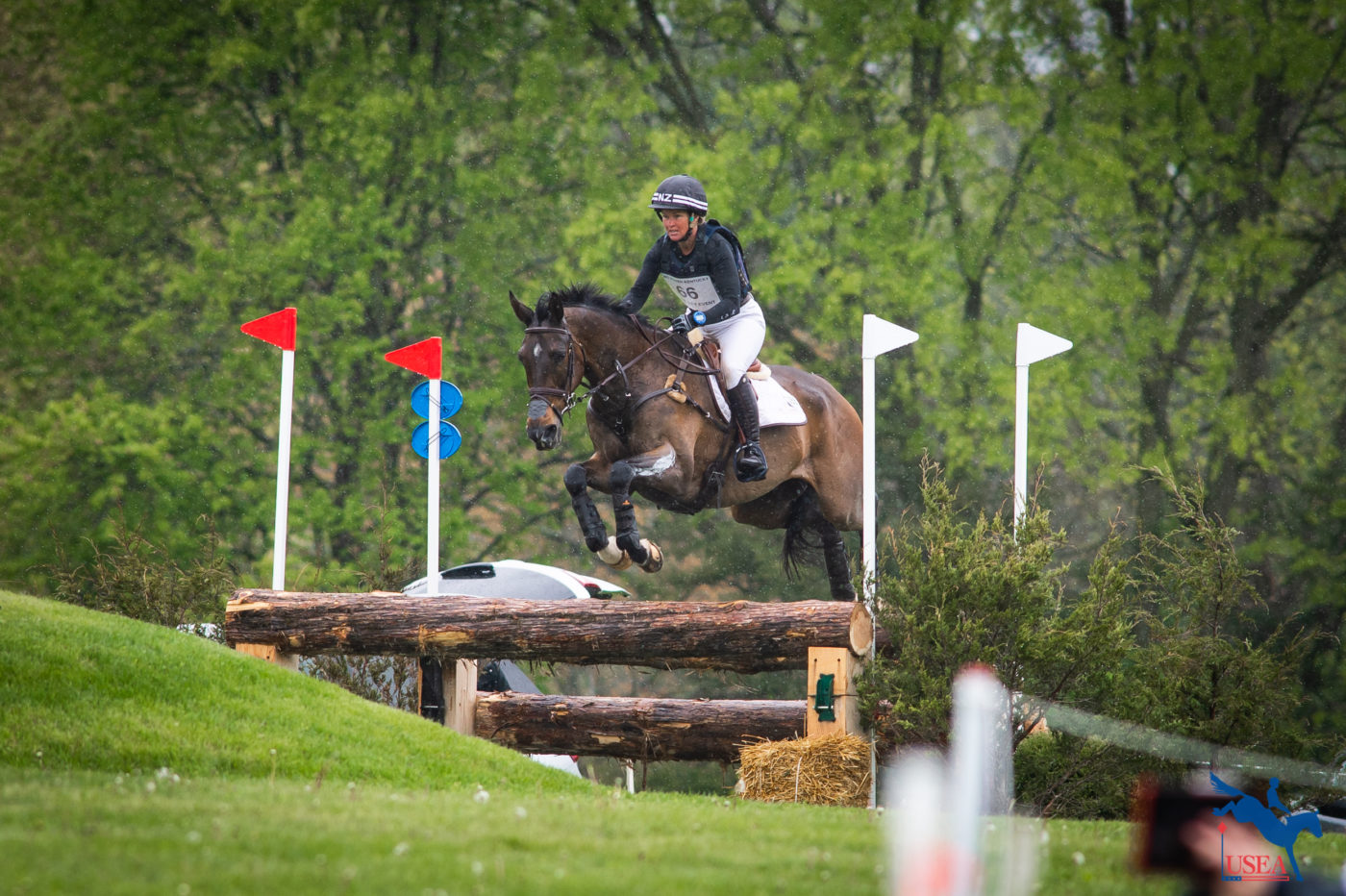 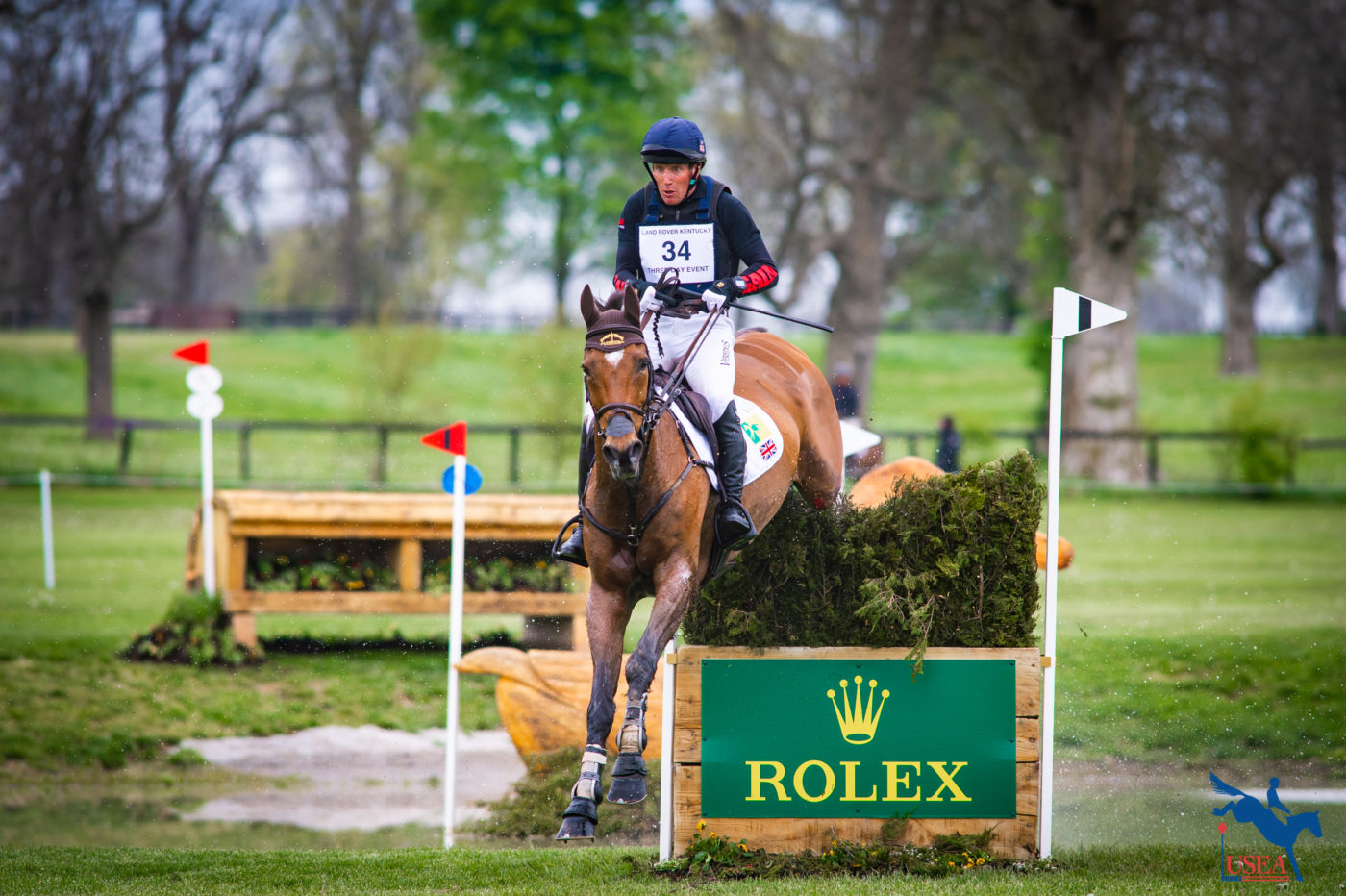 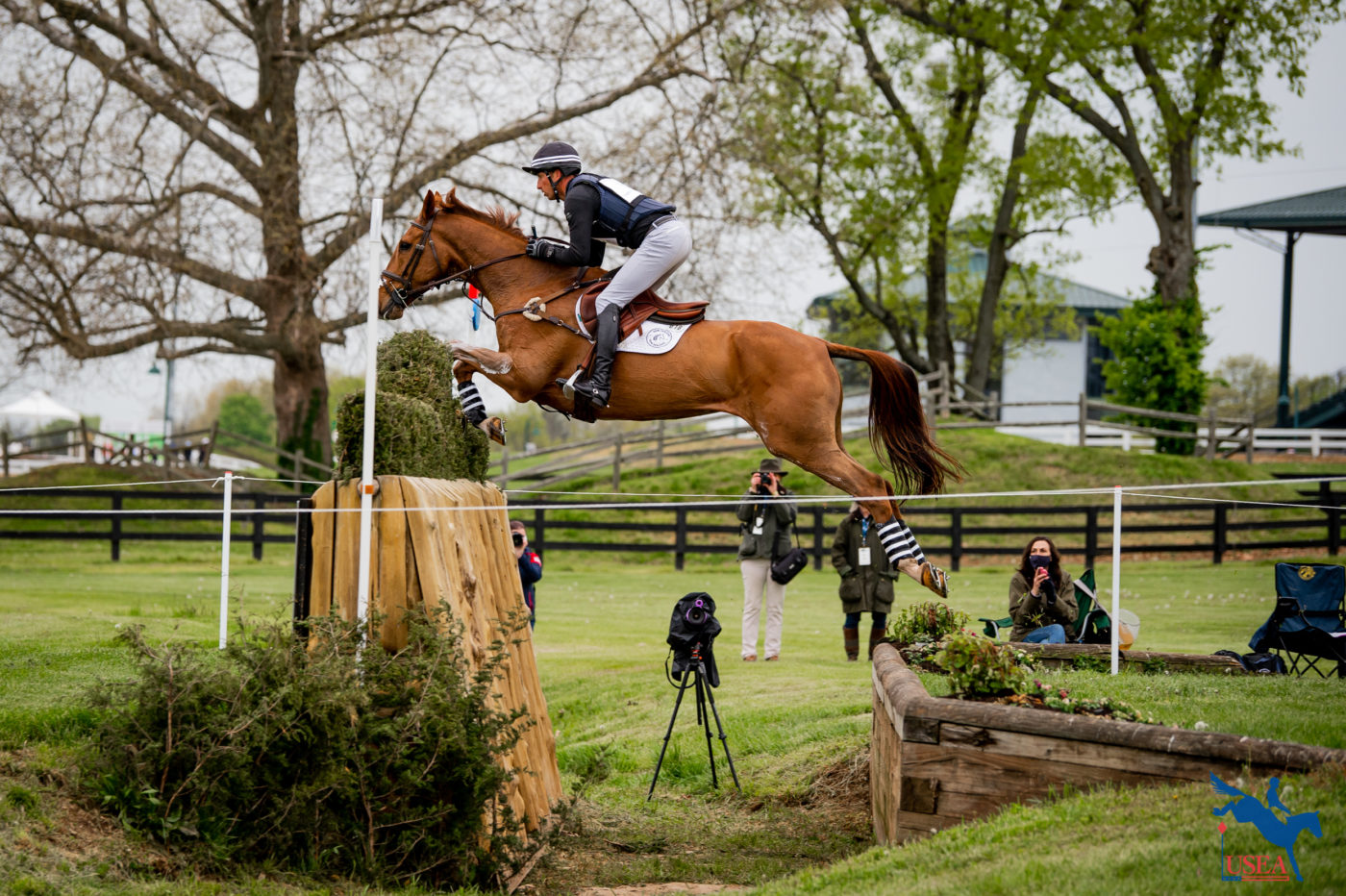 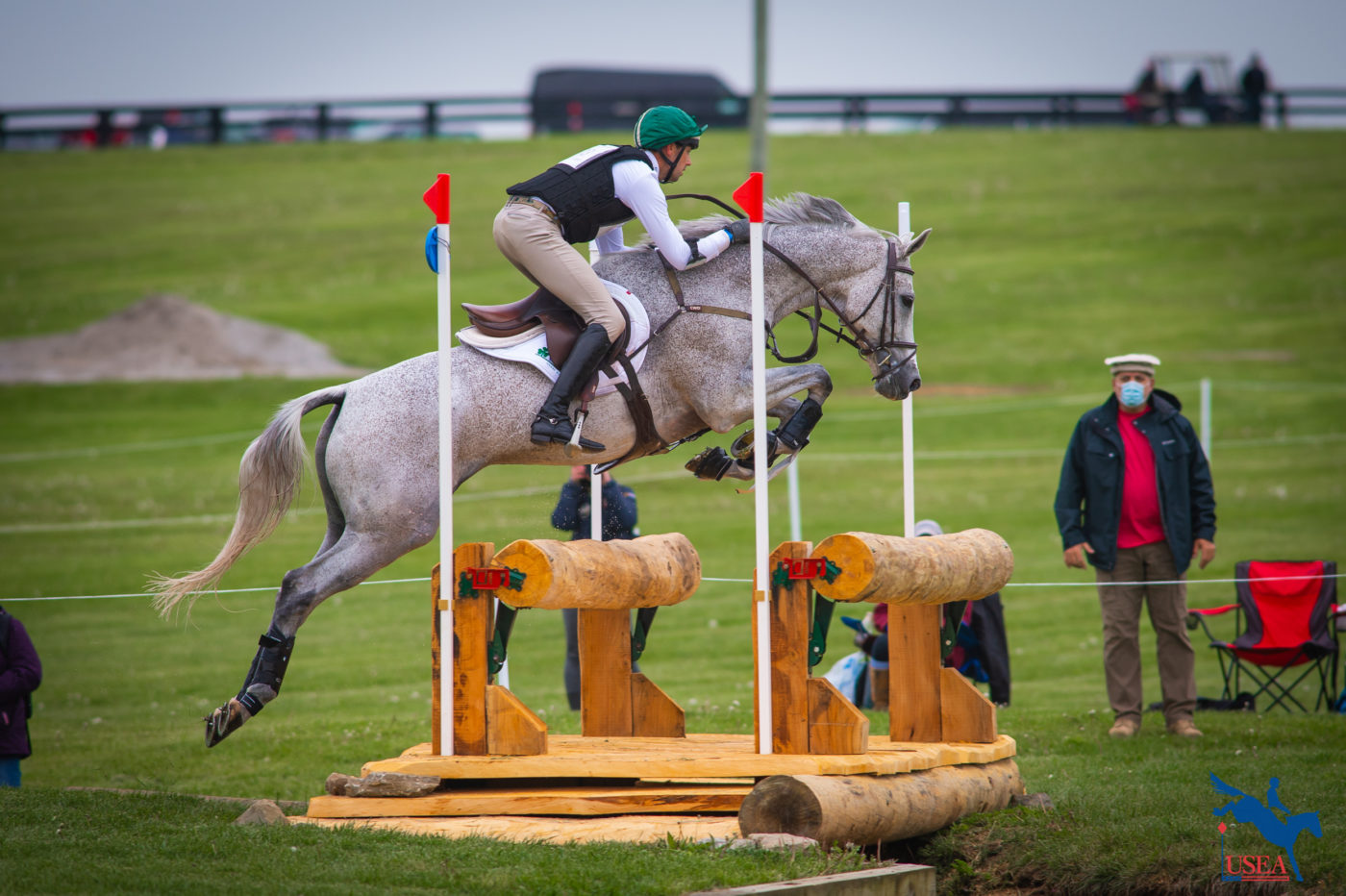 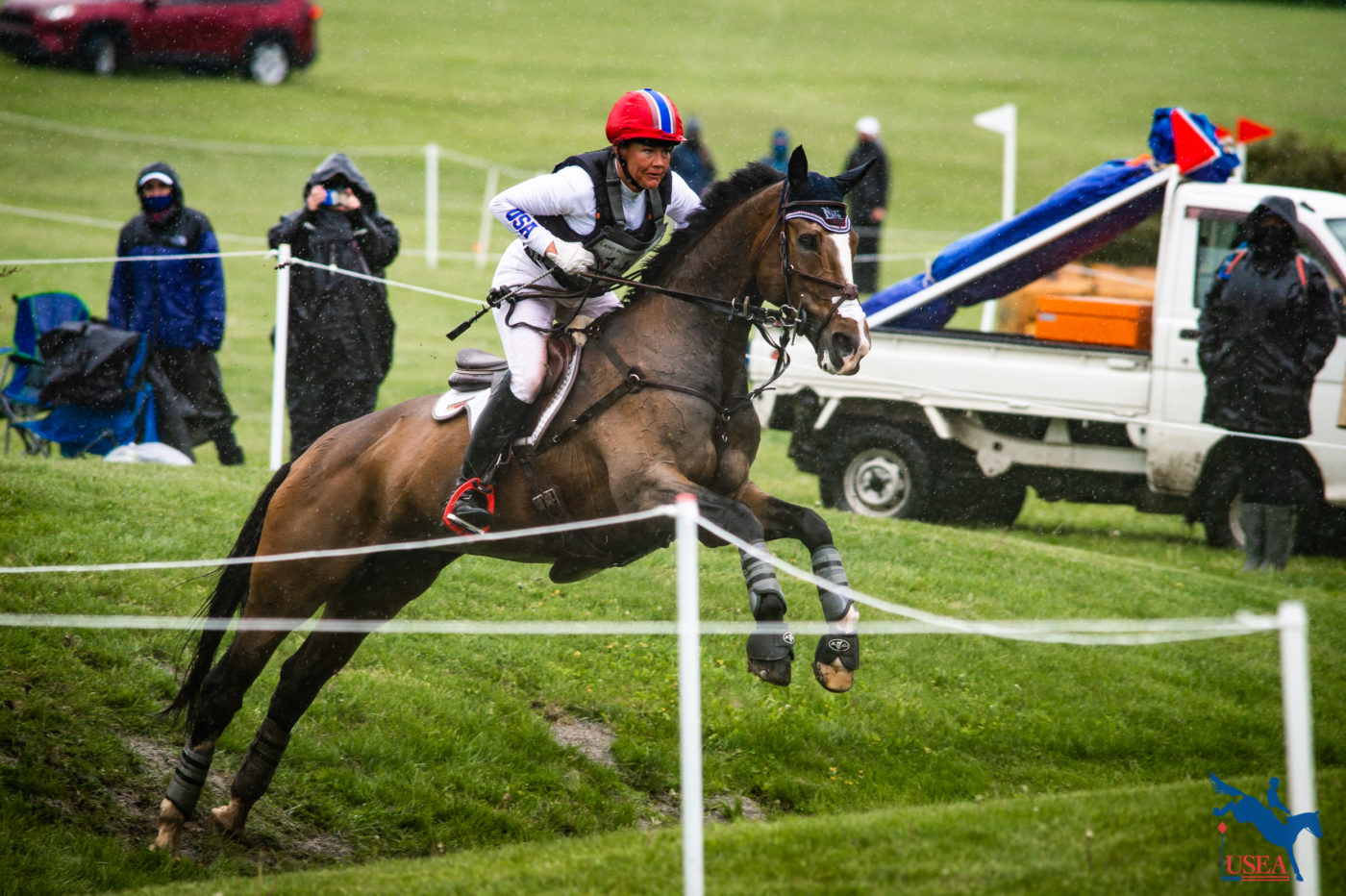 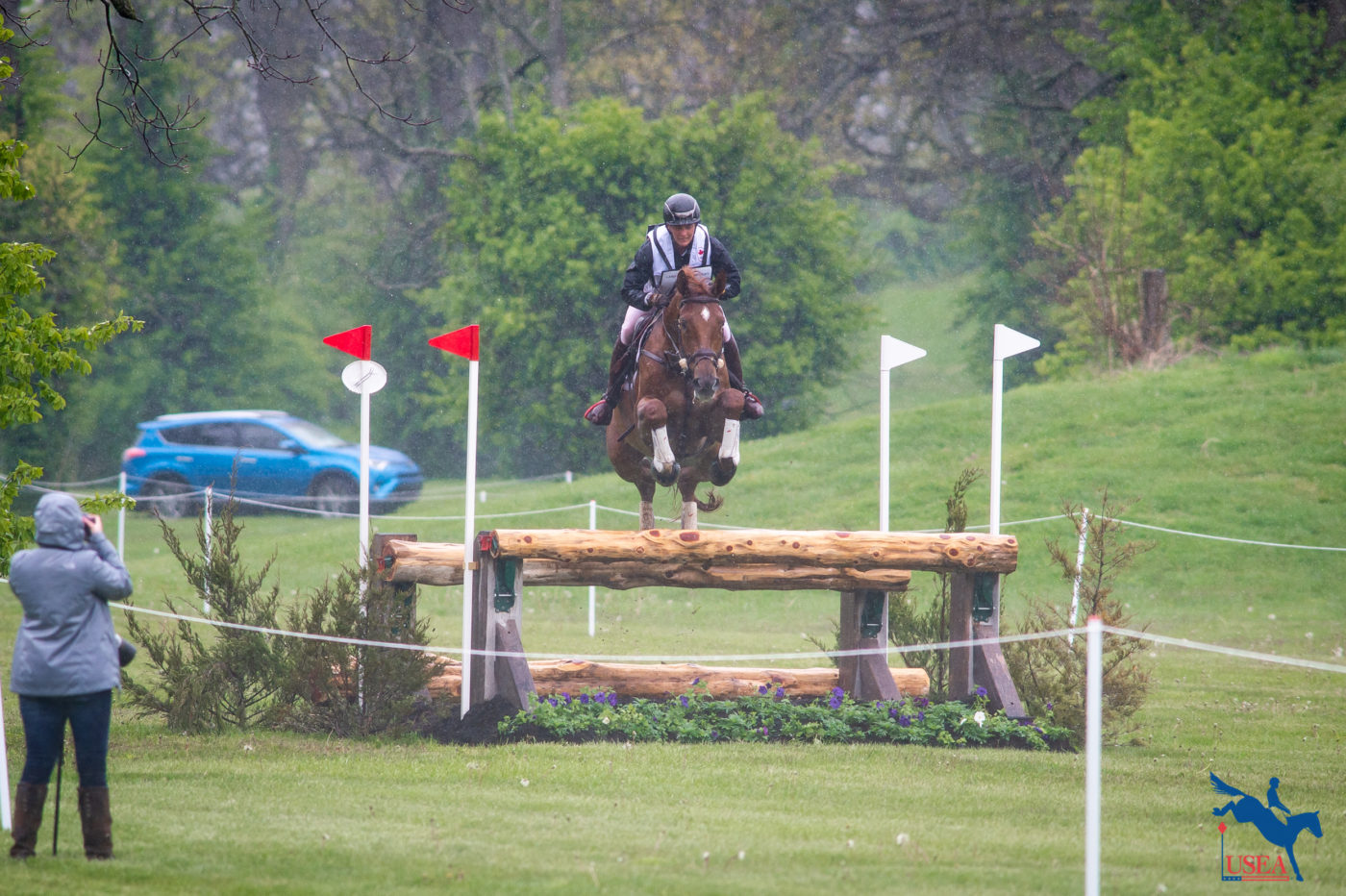