The long road to Montana was conquered, jogs were passed and teams were selected so competition could officially get underway at the 2017 Adequan/FEI North American Junior & Young Rider Championships (NAJYRC) with dressage. Thirty-five horses entered the arena today, representing seven teams from the United States and Canada in the CH-J* at Rebecca Farm in Kalispell, Mont.

Area V came out on top of the leaderboard at the end of the day, with a cumulative score of 140.0. McKinsey Wickman claimed the best individual score of 43.1 with her own 9-year-old Irish Sport Horse gelding, Dassett Profile. Arden Stephens and her own Dutch Warmblood gelding Ultra T (Ustinov x Wiriomf) also claimed a top three individual score with a 45.1, helping Area V clinch the top spot heading into the cross-country phase. Adriana Beruvides and Julie Norman’s Consensus (Contucci x Miss Me Not), a 17-year-old Thoroughbred gelding scored a respectable 51.8 and Kit Ferguson and Yoshi (Chant de Parx x Destiny), her own 19-year-old Holsteiner mare rounded out the Area V Team on a 59.6.

Today’s leader, Wickman, stated that it has been a dream of hers to compete in the NAJYRC for about nine years. “Last year I was riding Training level, so I’m very proud of where myself and Pro (Dassett Profile) are today, and how hard we’ve worked to get here. I’ve had him for two and a half years, and I brought him up to this level. He was doing Training level with Lillian Heard when I bought him, and I had never competed at the Preliminary level either. It was a lot of tough learning, but it was fun moving up to this level together.”

“Going into the arena today, I was extremely nervous, but he [Dassett Pofile] was super soft and supple, and everything I asked of him he gave to me, which I’m extremely grateful for. I could not be more proud of my horse,” Wickman said.

An individual rider from Area II, Megan Loughnane and Linford earned an even 45.0 to sit in second place heading into cross-country. Linford (Landos x Napoline) is an 8-year-old Holsteiner gelding owned by Loughnane.

Its been over a decade since Will Faudree coached Young Riders - he worked alongside Bobby Costello coaching Area I in 2005 - but Faudree is excited to be at the helm of his home Area V now. “When I was asked about applying for this job this year, I admit I had to think about it for a while, but now I’m really glad I applied, and I’m very grateful I got it. I’m very proud of these six girls today and all the hard work they’ve put in for this first place position. This is the right foot to start out on for the rest of the weekend, and we hope to be in this same standing on Sunday,” Faudree said.

Coach Faudree and Area V Young Rider Coordinator Tayler Owen instilled a few rules for the Area V team in order to have them focus on the Championship atmosphere this week, such as a no cell-phone rule. “We’ve asked the kids to put their cell phones into a cubby or a box during the day and only use them for emergencies,” stated Faudree. “The kids and all the parents have mine and Tayler’s contact information, so we’re reachable at all times, but this helps the kids stay off social media and forces them to interact with each other, stay involved, and enjoy this competition and Championship they’re at. I’m trying to put forward that team experience and along with that, the honor and experience of representing your country and yourself. The greatest honor any athlete can have is to represent their country.”

Sloane Pierpont and her family’s a 12-year-old Warmblood gelding Indie (Vechta x Indulga) scored a 45.5, the best score for second-placed team, Area I. Erica Jarrell and her own and Brenda H. Jarrell’s Uni Sprite (Brynarian Brenin AP Maldwyn x Better B’ Leavin), a 12-year-old Welsh gelding also helped push the team up into second place, scoring a 49.8, followed by her brother William Jarrell and Gray Area (Accondy x Merry Gypsy), an 11-year-old Irish Sport Horse gelding on a 51.1. Natasha Knight and her own 9-year-old Thoroughbred gelding Harbour the Truth follow closely behind on a 52.7 for second placed Area I, finishing dressage day on a cumulative team score of 146.4.

Area III rounds out the top three with a cumulative score of 150.1 and Canada follows closely behind on a 153.2 heading into the cross-country phase.

Thirty-four of the 35 CH-J* pairs will move onto cross-country, after Elizabeth Ragan was unfortunately eliminated for using an illegal bit in dressage.

The Area V Team exclaimed that they were excited to be competing up in Montana where there’s green grass and “squishy footing,” a much different feel than their Texas and greater Area V homeland. Area V individual rider Ryan Hall also noted that the decorations on the cross-country fences were much more impressive and exciting than back at home, and that the course has a true Championship feel. Jane Cook thought Ian Stark's course looked like a true championship test and is excited to ride it on Saturday.

The NAJYRC CICOY2* division begins dressage tomorrow at 8:30 a.m. (MST), and then all the NAJYRC riders will tackle Ian Stark’s cross-country courses on Saturday. 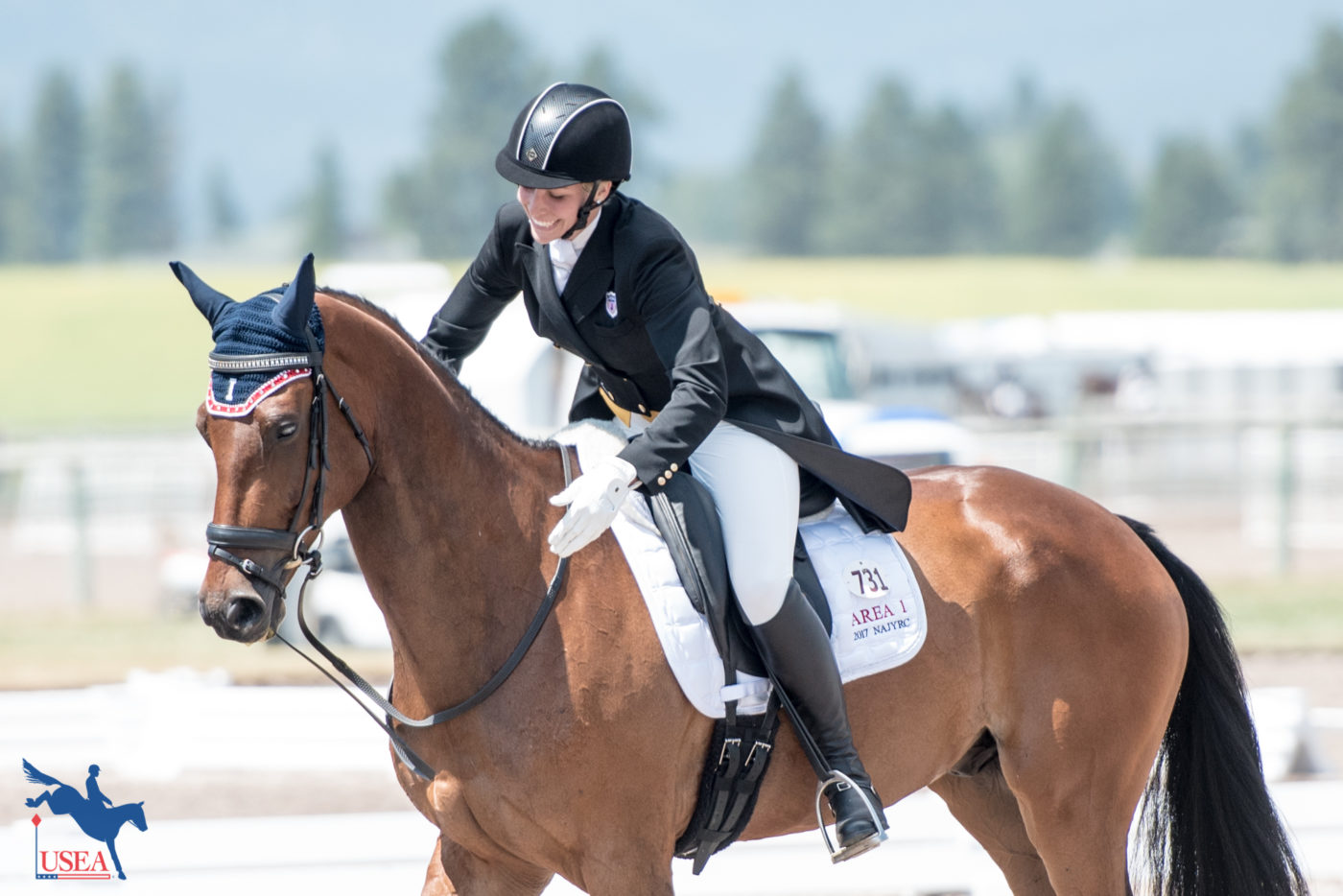