Frankie Thieriot Stutes and The Chatwin Group’s 10-year-old Oldenburg gelding Chatwin (Contendro I x Oktav) were the winners of the 2017 Galway Downs International CIC3* last spring, and after the first two phases of competition are well on their way to securing the title for a second year in row. Thieriot Stutes gave birth to her second child in December, and this is her and Chatwin’s first FEI competition since they won the Bromont CCI3* last June.

“I thought the trot work was honestly the best that he’s been in the trot work, I was really happy with it,” commented Thieriot Stutes of her dressage test with Chatwin from this afternoon, which scored a 28.8 for the lead heading into show jumping. “In my canter work he actually got quite strong. He swapped on me in the second counter canter, but I think he was really quiet in the warm up and going into that ring it was a little more electric than I thought, and I might have pushed too much early on in the canter and he kept going at the end of it."

“Overall it’s just so fun to ride him on the flat,” said Thieriot Stutes. “Tamie [Smith] keeps telling me , ‘go enjoy your horse,’ because I want to make it all really good and kind of bother him the whole time, but I’m trying to do that and just enjoy him through the process.”

Thieriot Stutes and Chatwin had just one rail down but still managed to hang onto the lead headed into cross-country tomorrow morning. She commented that she has been working with her friend and coach Tamie Smith to improve their show jumping, particularly their rhythm. “for me, that’s been our biggest obstacle in our partnership together. I came in a little hot to the one stride, but other than that I did feel that my rhythm was better so I was happy with that today.”

Tamie Smith is right on Thieriot Stutes’ heels with Sunsprite Syrius (Titulus x Slytely Cinnamon xx), Sunsprite Warmbloods’ 10-year-old Trakehner gelding after adding four time penalties to their dressage score of 31.2 to sit on an overnight score of 35.2 heading into cross-country tomorrow. The pair are coming off a great year last year, which culminated in winning the CCI2* at Fair Hill International, and are attempting the gelding’s first CIC3* this weekend.

“[He feels] completely out of control,” joked Smith when asked how Sunsprite Syrius has been stepping up to the three-star level. “He’s been a complete wild indian since he came back from Fair Hill. He was like this as a 5-year-old and then he settled in and has been a perfect gentleman since and now he’s a complete wild crazy lunatic. But he tries so hard, and he was good on the flat. He’s green at the level – I didn’t get my changes – but everything else I felt was really good and he show jumped beautifully.”

Two rails in show jumping dropped Helen Bouscaren and Ebay (Escudo x Contessa), her 9-year-old Oldenburg gelding, from second to third place overnight in the gelding’s first CIC3* attempt. “He was really good on the flat,” praised Bouscaren. “He was the most rideable he’s ever been and so at times I kind of needed to go for it a little bit more. He broke into the trot out of the canter twice so that was a new one for us, normally I’m just holding on for dear life, but that was great. I was really happy with how he behaved and I was able to show him off in the trot, which was nice.”

“He jumped really well,” Bouscaren continued. “I felt like he didn’t deserve [to have] two down, I kind of robbed him there. But that’s okay, we’re both kind of building a partnership still. He jumped the majority of the course perfectly, I just needed to either add one or not add one at the upright . . . but he was great, I was thrilled.”

All three riders agree that the track Eric Winter has laid out for them is going to be challenging, not least because of how he has employed the terrain. “In a long time, I haven’t seen a three-star [at Galway] be tough,” remarked Smith. “They’d have a couple tough combinations on the course, but everything is a three-star combination, and I think it’s great. I think that’s what we need, and I think that Eric’s done a really good job with creating a lot of terrain on a piece of property that has no terrain.”

“It’s a cool course,” chimed in Bouscaren. “It’s so different, it’s nice that he changes it so much every time, like it’s totally different from the fall.”

Thieriot Stutes quipped that her goal for tomorrow is to stay on after parting ways with Chatwin on cross-country at Twin Rivers earlier this month. Chatwin hasn’t run a track at this level since Bromont last summer and he spent the fall and winter in training with Smith but didn’t set foot on a cross-country course during that time. “I do feel that last year at Bromont was a big step for us in our partnership and he is such a trier, so tomorrow I’d just like to do right by him. I don’t think Chat enjoys walking back, so my plan will just be to go out and try to have a smooth ride.”

The CIC2* division saw quite a shuffle on the leaderboard and those that put in clean rounds were rewarded with a significant jump up the leaderboard. Gina Miles and Tara Verkuil’s 13-year-old Irish Sport Horse gelding Greenfort Othello (Radolin x Sevarine) were sixth after dressage on a score of 37.5 but rocketed up to first place after putting in a double clean round. Miles and Greenfort Othello have been partnered together for a little over two years, and she explained she’s put a lot of work into his training during that time. “It’s been a whole process of getting the dressage more correct and working through him here so that was nice to be able to have him start to kind of put it together in the ring and start to have the balance and the suppleness to be able to put together a test. There’s a lot more in there.”

“Show jumping has been his worst phase, for sure. He had a lot of rails at the last couple of shows and so it was super rewarding to be able to jump a clear round on him because that’s something we’ve been really hard on. I’m thrilled.”

Harper Click and Amy Click’s 9-year-old Oldenburg mare Rubia (Romantic Star x Pik Abou) have only been partnered together since last fall, but in that short time have won two of their four starts at the Preliminary level. The pair laid down a score of 27.5 early in the going this morning and then added just a single time fault in show jumping to hold their position overnight. “It was all really good,” said Click of how her day went. “I couldn’t really ask for any better. Our test was really steady and she’s always really good in the dressage so that wasn’t too difficult. She put in her best effort; I don’t think I was super accurate in my test but she always there with me.”

“Our warmup [for stadium] wasn’t exactly what I think is great [and] going in I was a bit nervous but she just went in and knew her job and was great. It was a tough course and I didn’t go as fast as I wanted but she was great.” 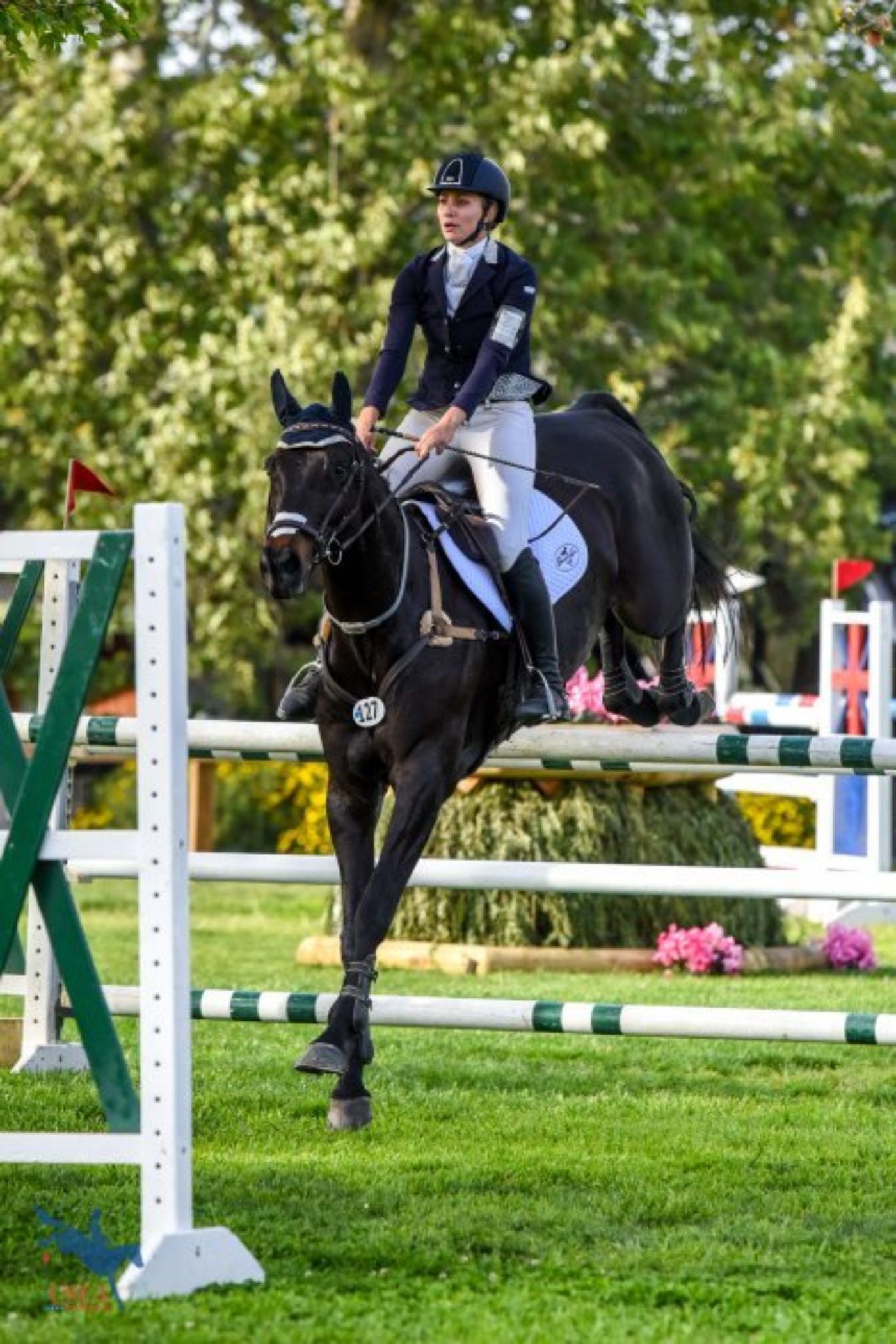 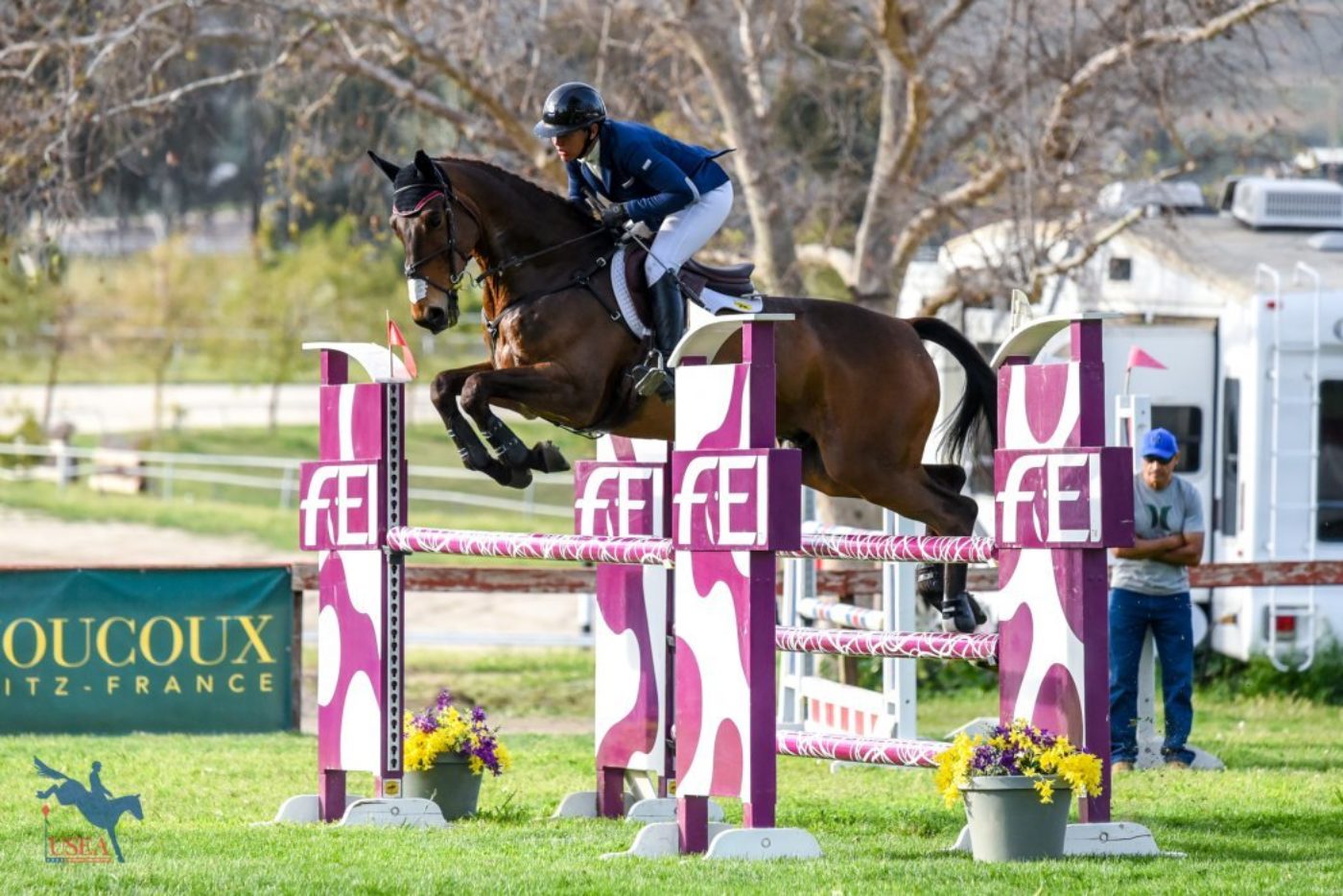 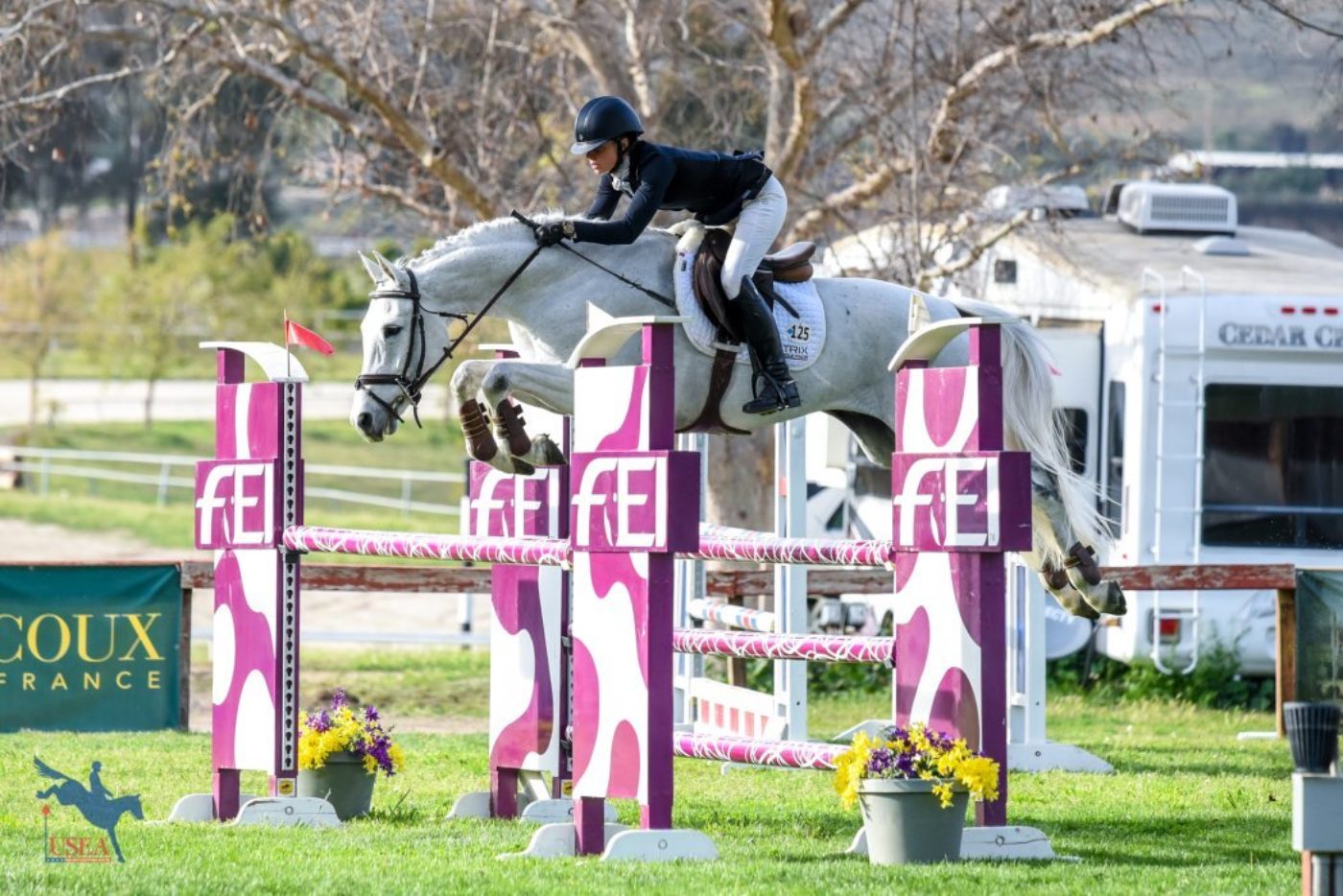 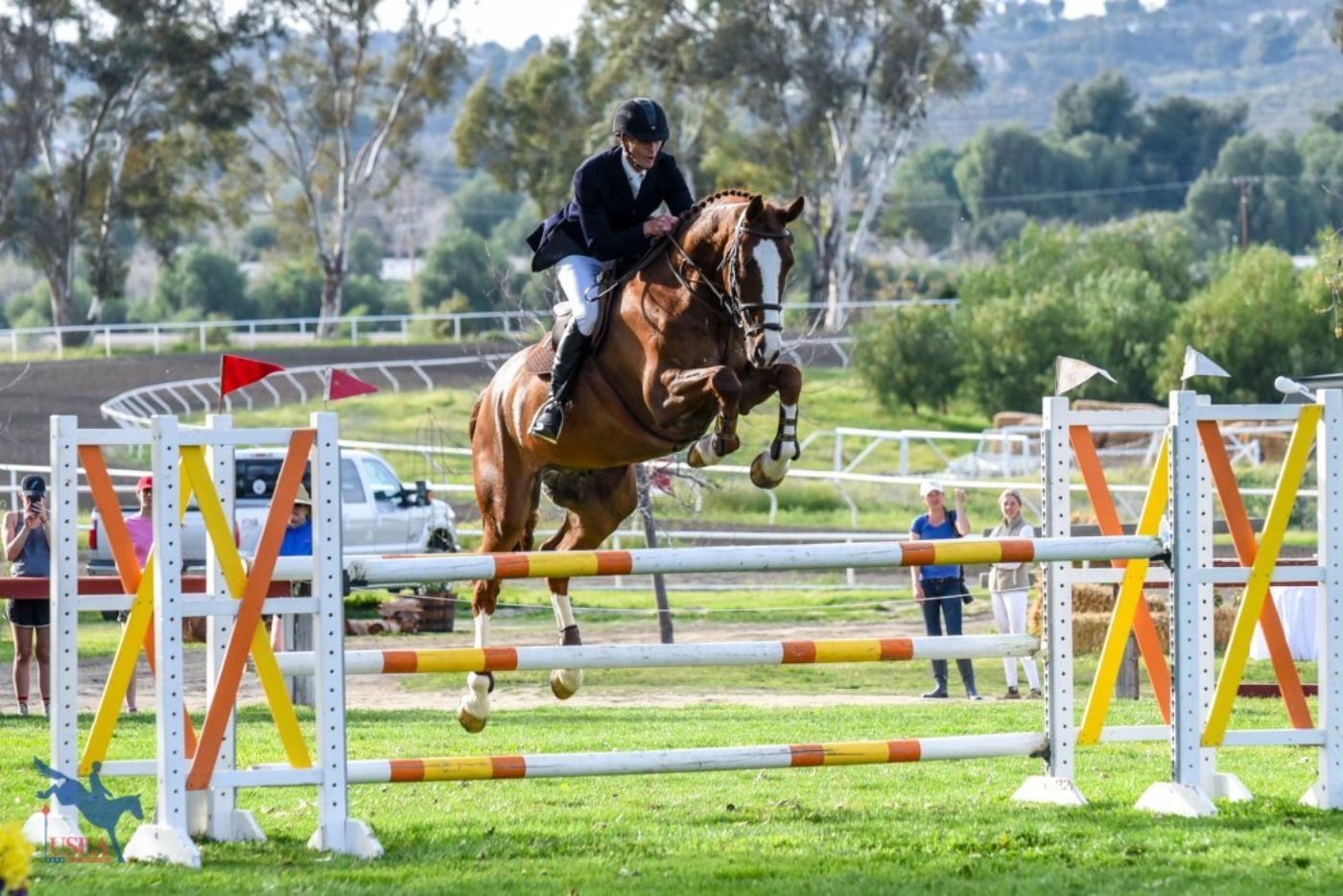 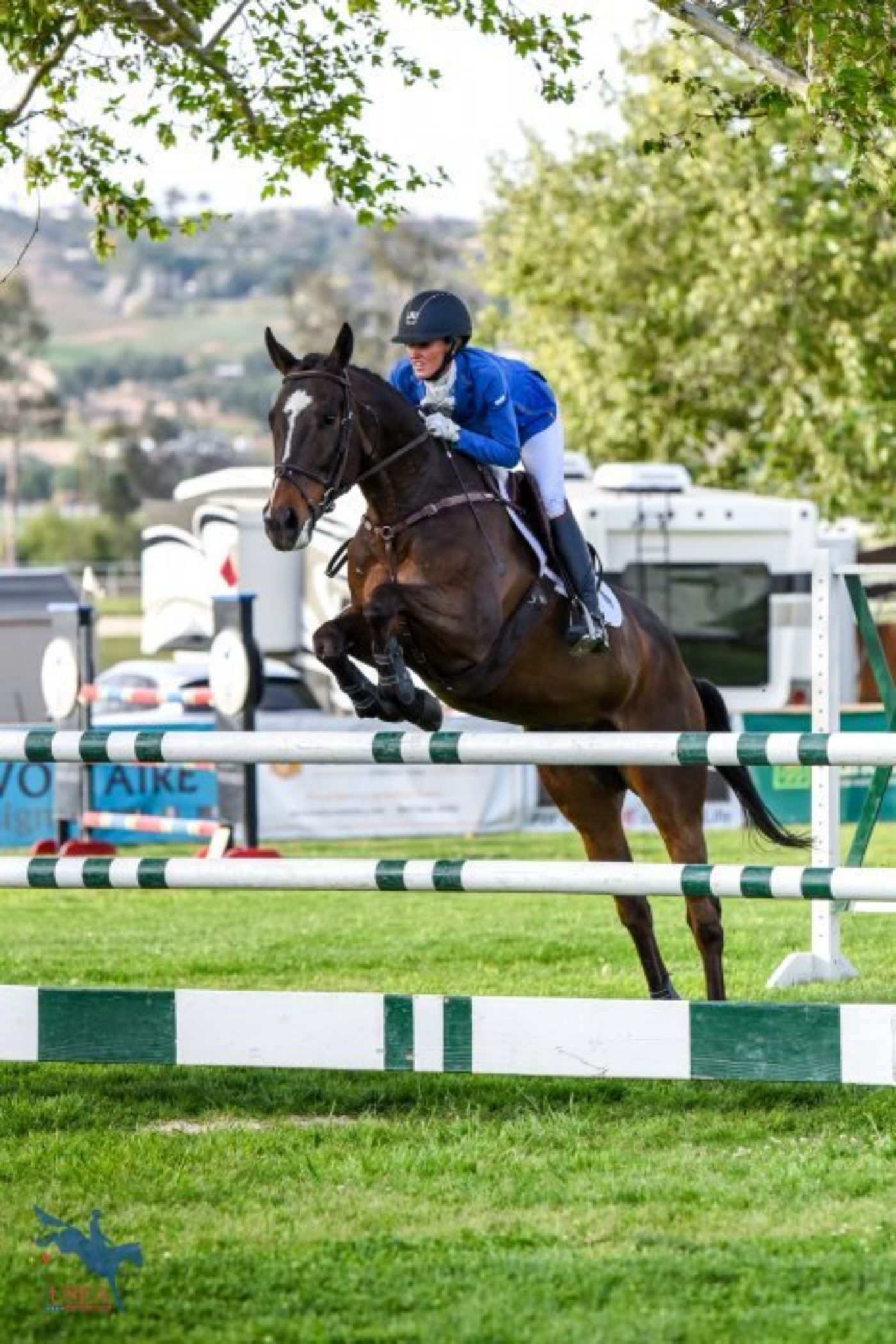 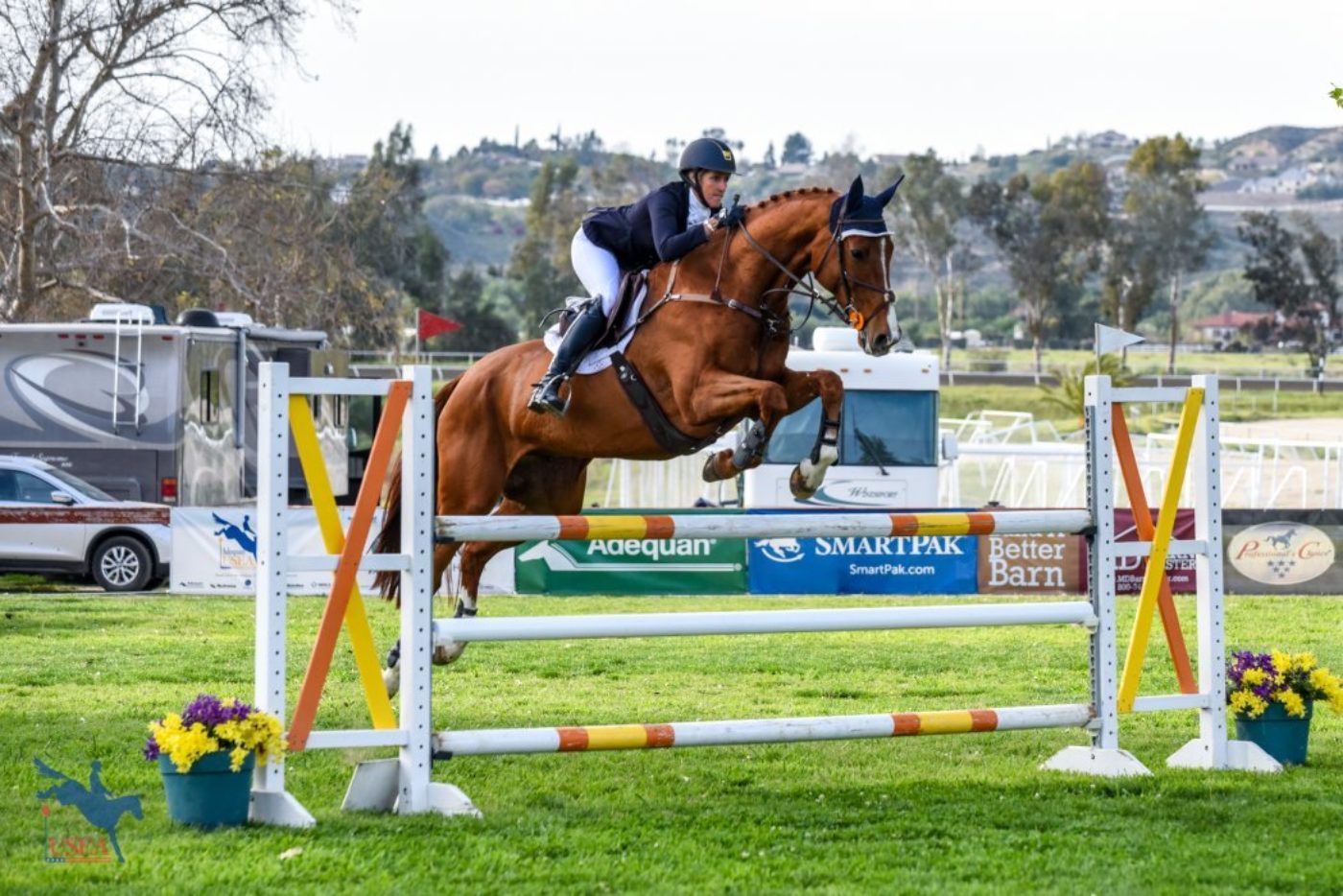 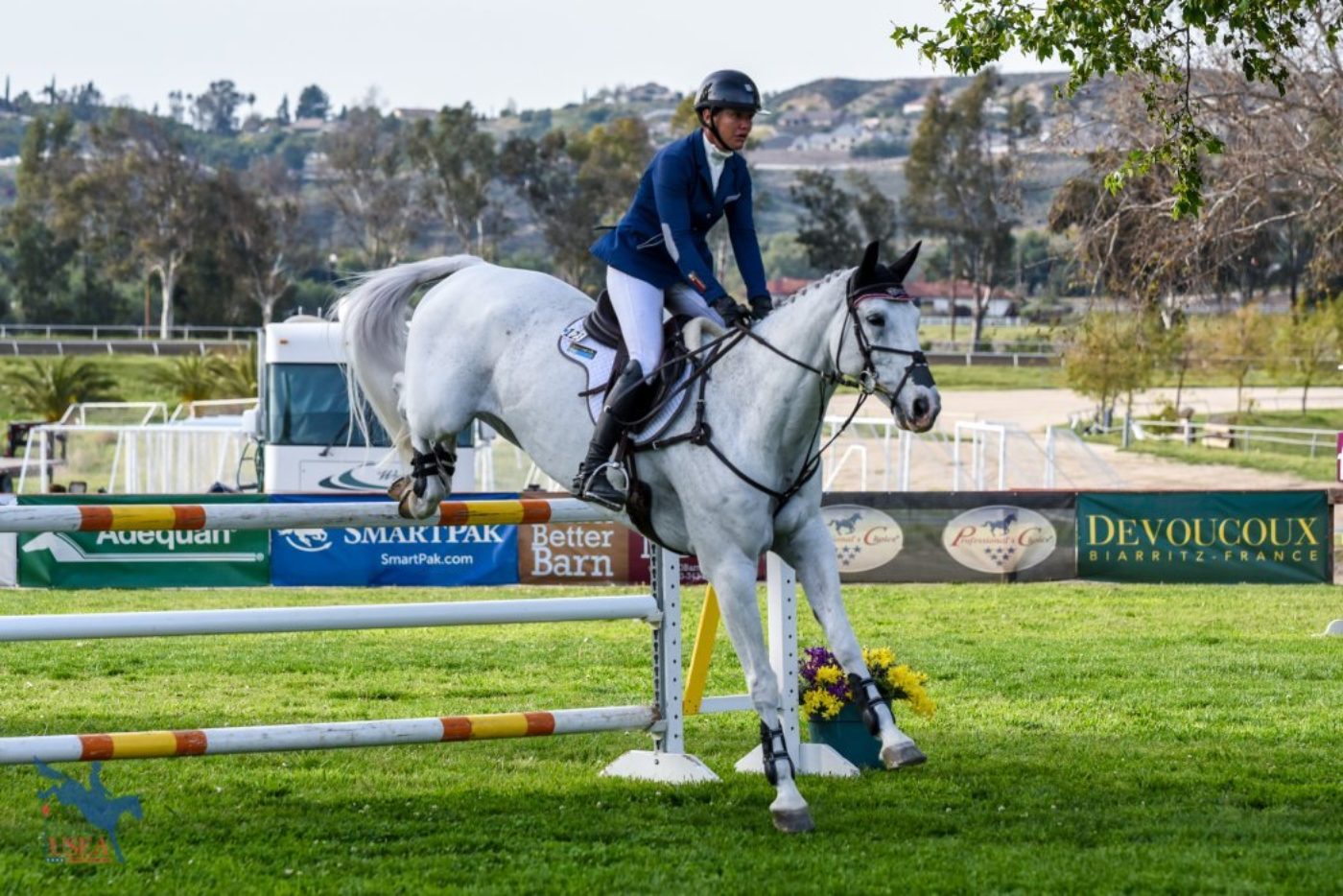