This weekend's USEA Future Event Horse (FEH) Central Championships, which took place at Haras Hacienda in Magnolia, Texas, brought forth 24 promising young horses for presentation to judges Christel Carlson and Karen Winn. Carlson & Winn applauded the beautiful facility and how well the event was run. When asked how the quality of horses in the Central Championships compared to the East and West coasts, Carlson commented, "there are good horses in all areas. There are average horses and good horses that have average days, but there are good horses in every area." Winn furthered the sentiment by remarking, “many of these horses in the Central Championships came from a very long way to be here, and many of them are returning horses as well. We appreciate seeing that for the program.”

Beatrice MRF (Barbarossa x Bayadere), a yearling Trakehner filly, owned and bred by Liz & Malcolm Mulroney of Prosper, Texas, earned the highest qualifying score for the USEA FEH Central Championships and continued that trend this weekend, winning the Champion Yearling Filly & Overall Champion Yearling titles with a score of 79.125. Owners Liz & Malcolm were thrilled with the results of their first homebred, who is also the first foal for Trakehner stallion Barbarossa and OTTB dam Bayadere.

“I have been in love with the Trakehner breed since middle school,” said Liz. “The history of the breed having to evacuate Russia during WWII just captured me, and I knew I wanted to have a Trakehner breeding farm.” Beatrice, as she is known at home, was certainly meant to “B.” Her sire was standing just a short drive down the road from their home at Double B Stables, which coincidentally was the first barn at which the couple boarded after moving to Texas. The sire and dam names both started with a B, leading to the name Beatrice MRF.

Placing Reserve Overall Yearling and Champion Yearling Colt with a 76.9, was Paige Clement's Irish Draught Sport Horse gelding, Summerhill Falkor Draconus (T F Classic Twist x Tully Macs Lady Hawk), bred by Cristi & Tommy Flynn of Summerhill Farm in Belton, Texas. Clements and her wife Bobbie purchased “William” in-utero two months prior to his due date. William earned his namesake as he was born on the day that both Paige and Bobbie had the once-in-a-lifetime opportunity to clinic with William Fox-Pitt.

"With a pedigree that includes the likes of Chapot’s stallion Good Twist, and Irish Draught sire Skippy the sire of Jumbo, William is the culmination of so many owners, riders, and breeders' dreams and faith in their horses," shared Paige. "We are so proud to be continuing those dreams with this horse."

The judges then scored the Two-Year-Old Championship and TGS Alls Well Mr. Perry (Rather Well x Windfield All Sunshine) achieved the Overall Two-Year-Old Champion as well as the Champion Two-Year-Old Colt on a 76.5. Owned and bred by Ann O’Donnell of Argyle, Texas, the Irish Draught Sport Horse gelding recently passed his inspections for the Irish Draught Horse Society of North America in Weatherford, Texas, with high praise from the inspectors. Ann O’Donnell is familiar with blue ribbons in the FEH program. In 2020 her Irish Draught Sport Horse mare, TGS Lions Sunshine, a half-sister to TGS Alls Well Mr. Perry, was the Overall Yearling Champion. This year “Perry,” lovingly named after her longtime ranch manager, Gene Perry, continued the tradition.

O’Donnell remarked that Perry is a “sensitive and more cautious” horse, often taking a while to warm up to new ideas, but overall has that “agreeable Irish Draught personality.” It was the personality that induced O’Donnell to begin breeding the endangered breed in 2007, starting with the purchase of Perry’s mother.

The Reserve Champion Two-Year-Old and Reserve Champion Two-Year-Old Colt, with a 75.825 score, was Deanfield Dubhlainn (Braveheart RID x Jaddabreathe), an Irish Draught Sport Horse gelding owned by Christine McCarter and bred by Debbie Fullilove of Houston, Texas. Christine purchased “Jack” very shortly after he was born. Next year McCarter plans to start Jack under saddle and continue with the Three-Year-Old FEH classes. “He has been wanting to be a ‘big horse’ for a long time,” McCarter said, explaining that he enjoys having something to do and interacting with people.

Coming out on top to be crowned the Three-Year-Old Overall and Three-Year-old Colt Champion was the Irish Draught Sport Horse gelding Gatsby’s Touch of Chrome (Gatsby x MFF Touch of Dutch), owned and bred by Amy Clemmons, DVM. “Guinness” is no stranger to the USEA FEH Central Championships, having won the Two-Year-Old Championship in 2021 and been dubbed the Reserve Overall Champion the same year. Guinness also recently passed his inspection for the Irish Draught Horse Society of North America, with praise from the inspectors who flew in from Ireland to host an inspection tour in the U.S. last month. Quite the cheeky boy, Guinness spent the entire liberty session of his arena time trying to break into the jump chute, where he then excelled once the chute was officially opened. Owner Clemmons says she plans to take “Guinness the Menace” on the Young Event Horse route in 2023 since she has already been lightly trail riding him and introducing him to many things on the ground in order to keep his busy mind occupied.

“He’s just a puppy dog,” owner Littrell says. “I won the breeding to his sire in a raffle and intended to sell the resulting foal, but was too attached to let him go when the time came.” Littrell says her plans for next year will be to qualify him for both the FEH four-year-olds and the Young Event Horse Championships and then decide which path to continue on based on how he develops over the year.

The Champion Three-Year-Old Filly was a Thoroughbred filly, Queen Kinley (Lookin at Lucky x Queen Cleopatra), scoring a 75.135. Queen Kinley was bred by Tiger Tail Ranch and is owned by Bernadette Britt, who gushed about how sweet this off-the-track mare is.

“She came off the track a year ago because she was very claustrophobic in the gate,” Britt explained. “I won’t start riding her until next year, I just think she needs a little more time.”

Finally, the Four-Year-Old Champion was a homebred Holsteiner stallion, Roulette OHF (Riverman x Malvern Hill). Owner Kristen Wallace, of Pilot Point, Texas, showed the bay stallion herself, earning top scores both under saddle and in the jump chute. Her plans for next year are to prepare him for his AHHA Stallion Licensing.

“We certainly plan to stand him to the public in the future, pending he maintains his easy-to-handle personality and does well in his licensing,” Wallace stated. Roulette OHF has his first over fences jumper show next month, and Wallace plans to show jump him primarily next year while preparing for licensing.

Reserve Champion Four-Year-Old, Westfalen mare Fly By, also a homebred by owner Alayna Joseph, was last year's Overall Three-Year-Old Champion. This year, Joseph piloted the flashy mare herself. “At home, Fly By is so laid back, but on the road, she is more of a handful,” said Joseph, “but we use that to our advantage in the ring.”

Despite the very diverse field of horses, it was true Irish luck that prevailed, with Irish Draught Sport Horses representing the breed well this weekend, winning blues in all but the Four-Year-Old division.

Many thanks to Haras Hacienda Show Manger Rob Moyar and staff; Fox Village show secretary Marilyn Kulifay and assistant Sue Williams; Joe DeSantis for handling horses and running the jump chute; the many volunteers who dedicated long hours this weekend making sure everything went off without a hitch; to organizer Jayne Lloyd for her never-ending dedication to promoting these young horse programs; and to our wonderful judges, Christel Carlson, and Karen Winn, for lending their expertise and time to help shape the next generations of the sport. 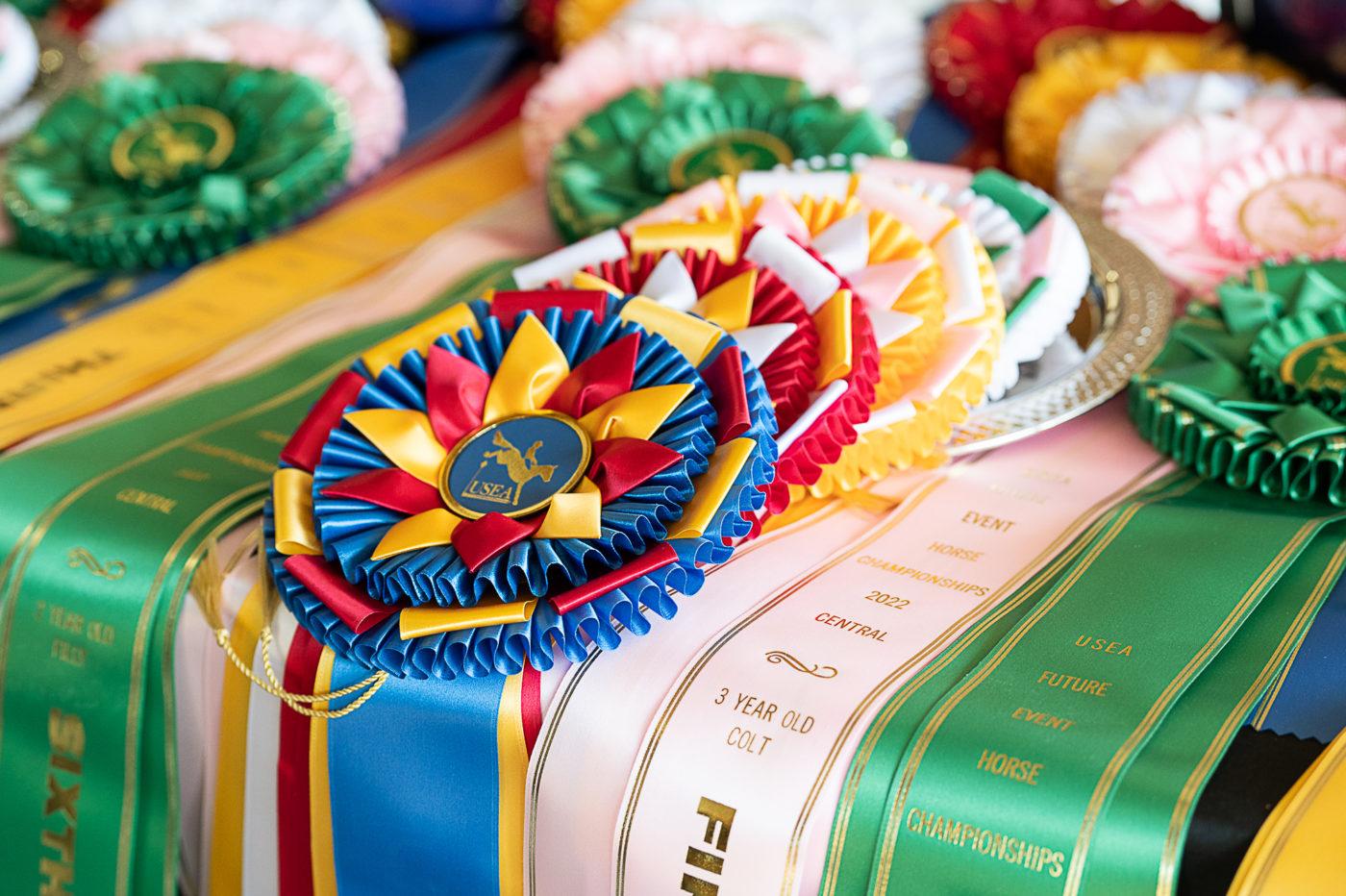 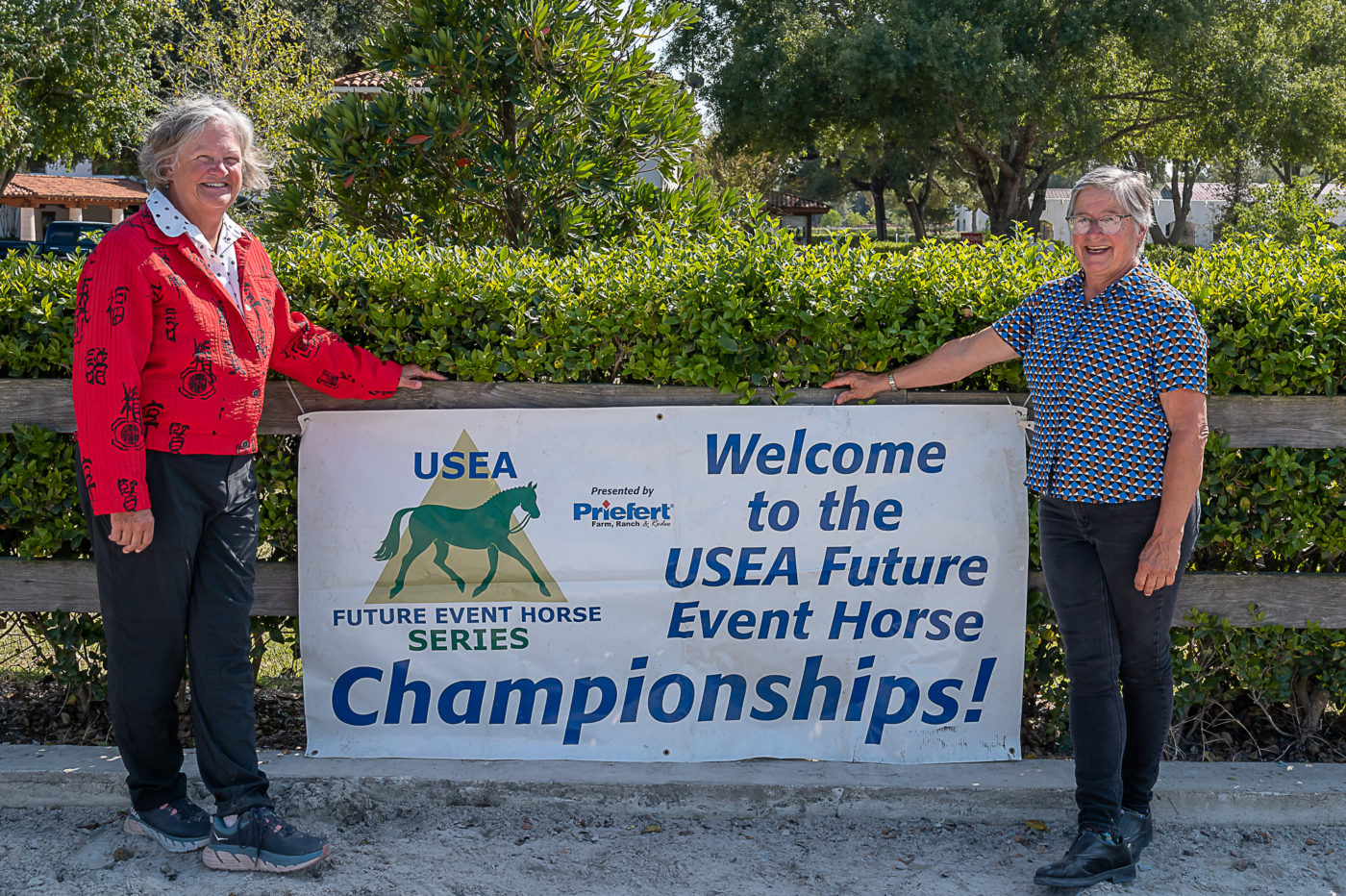 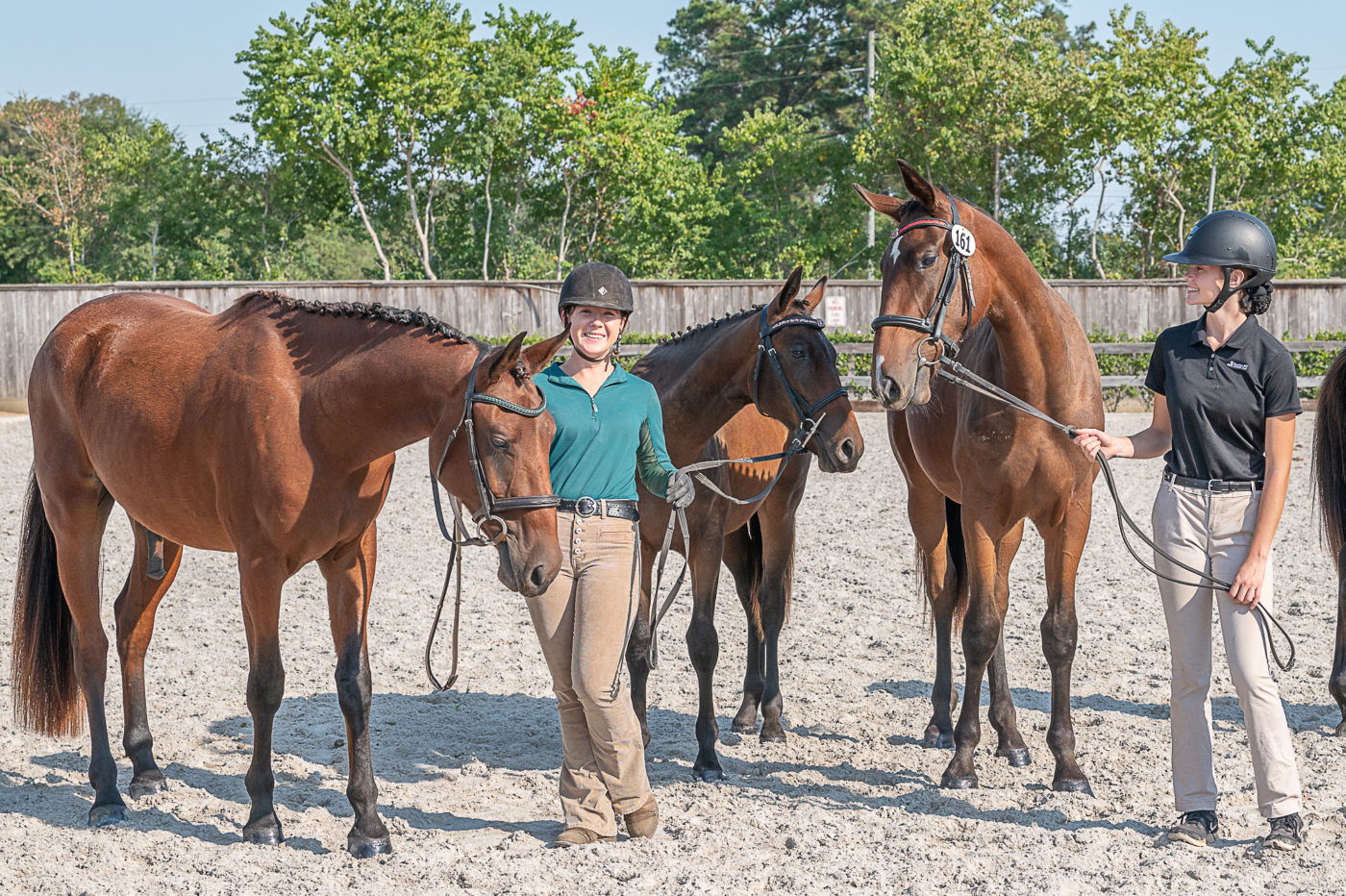 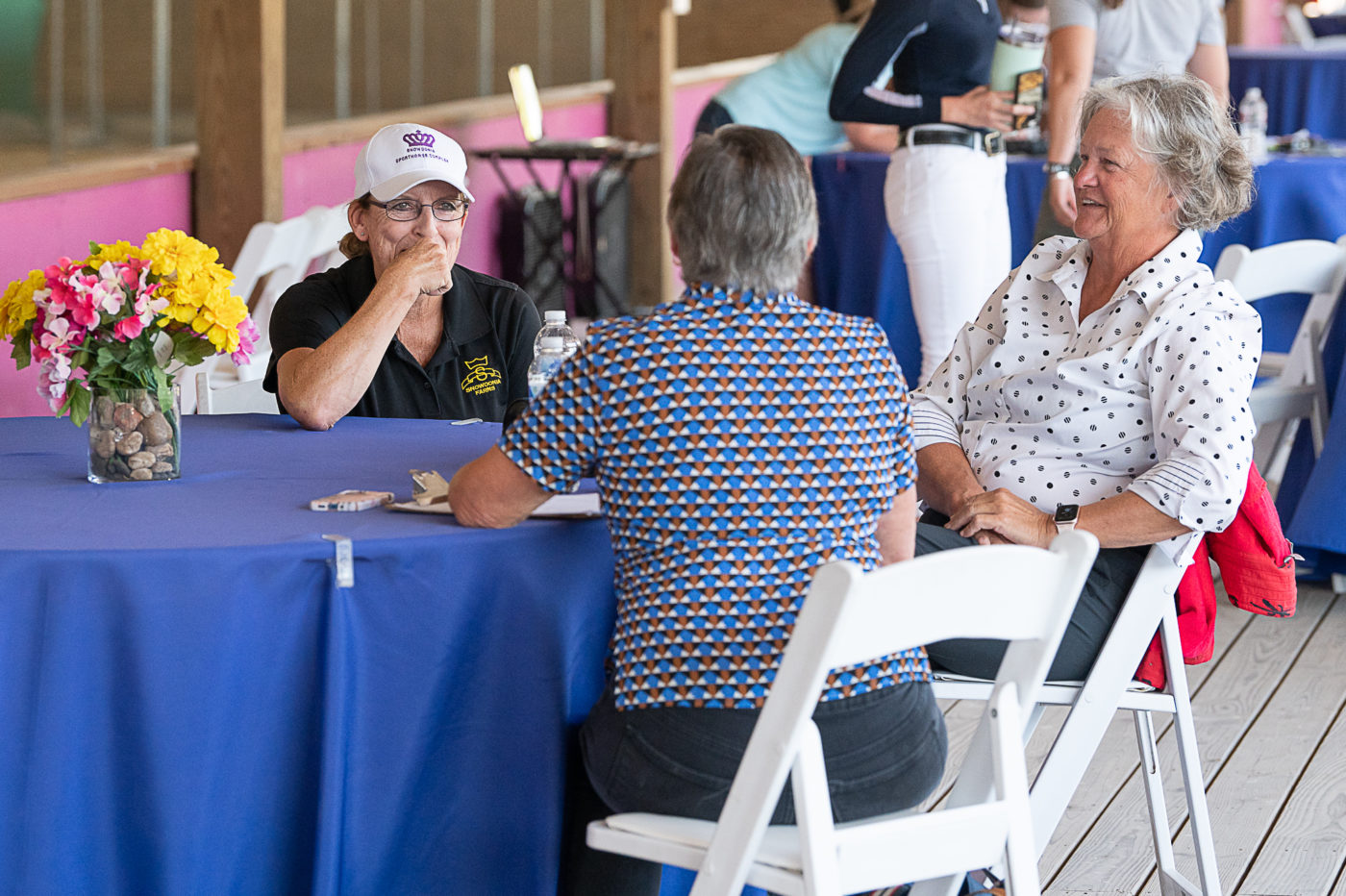 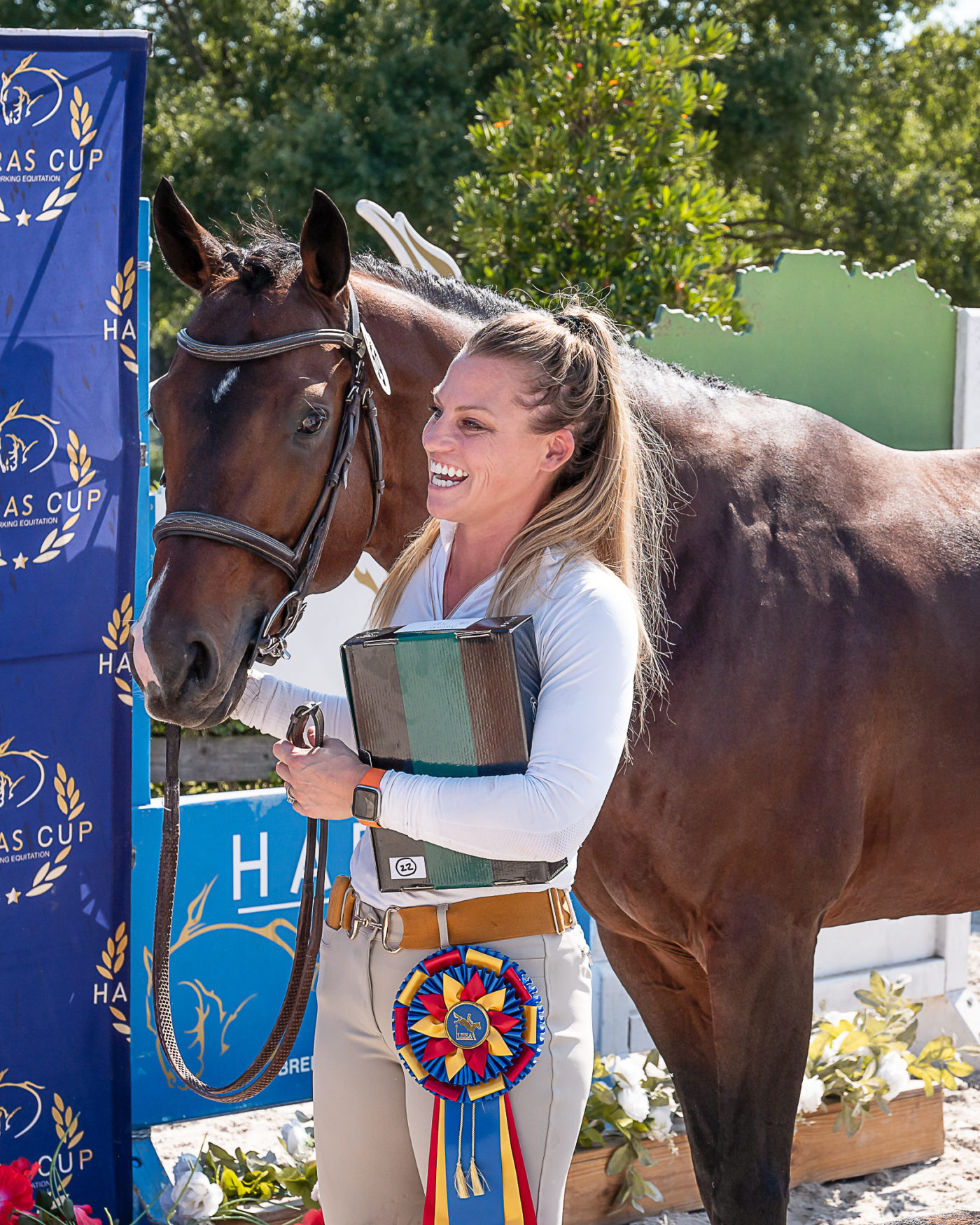 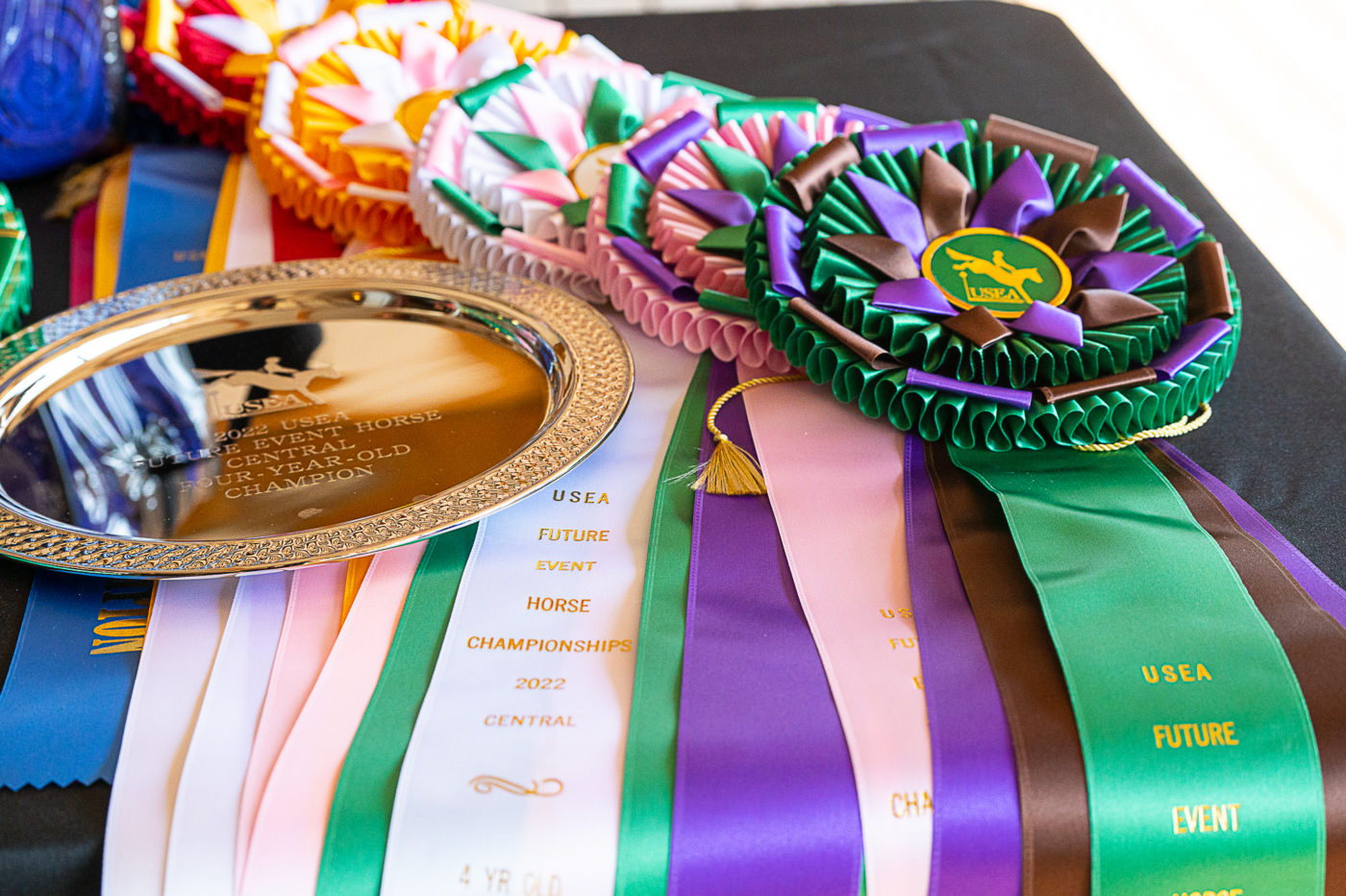 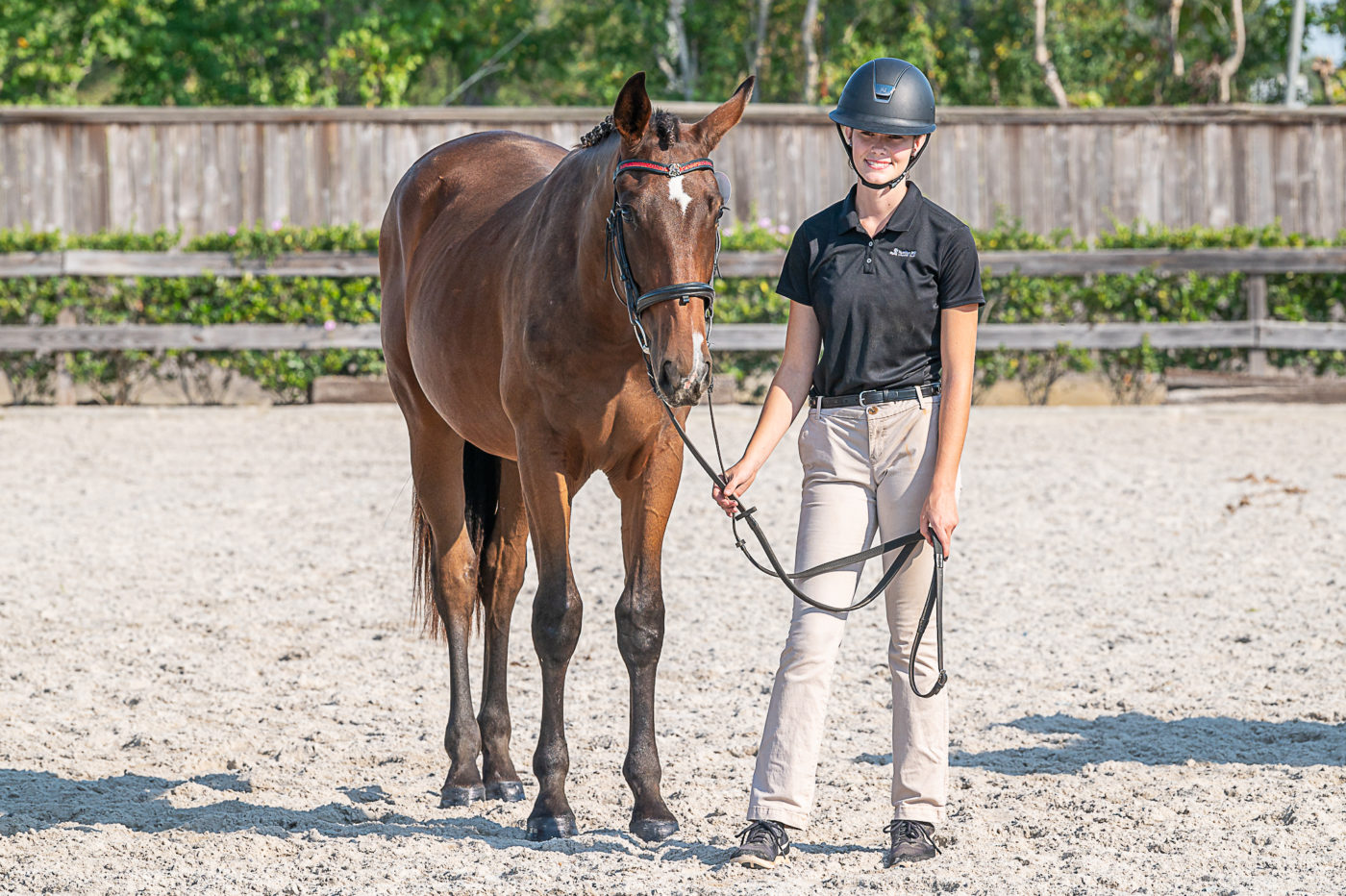 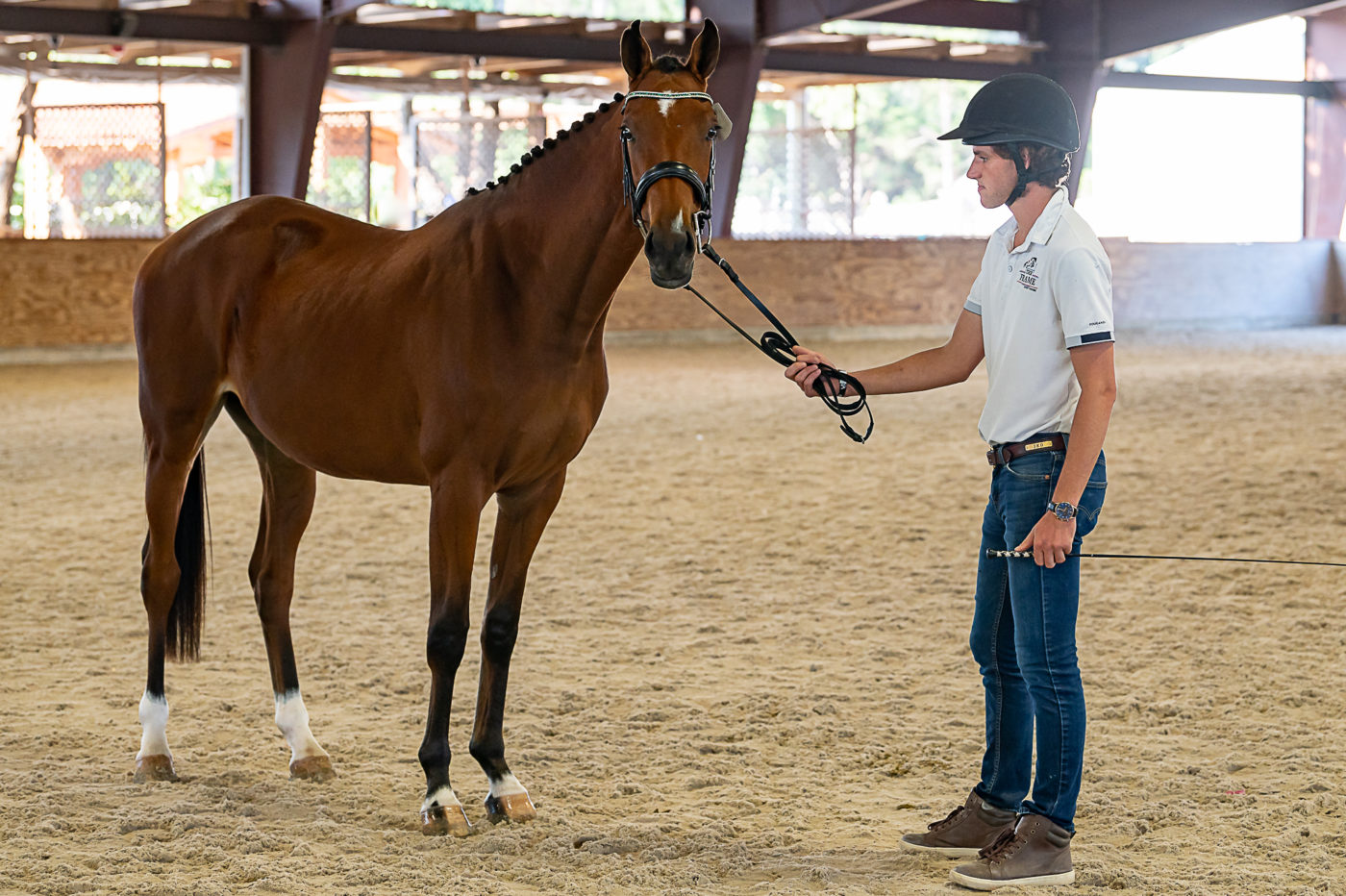 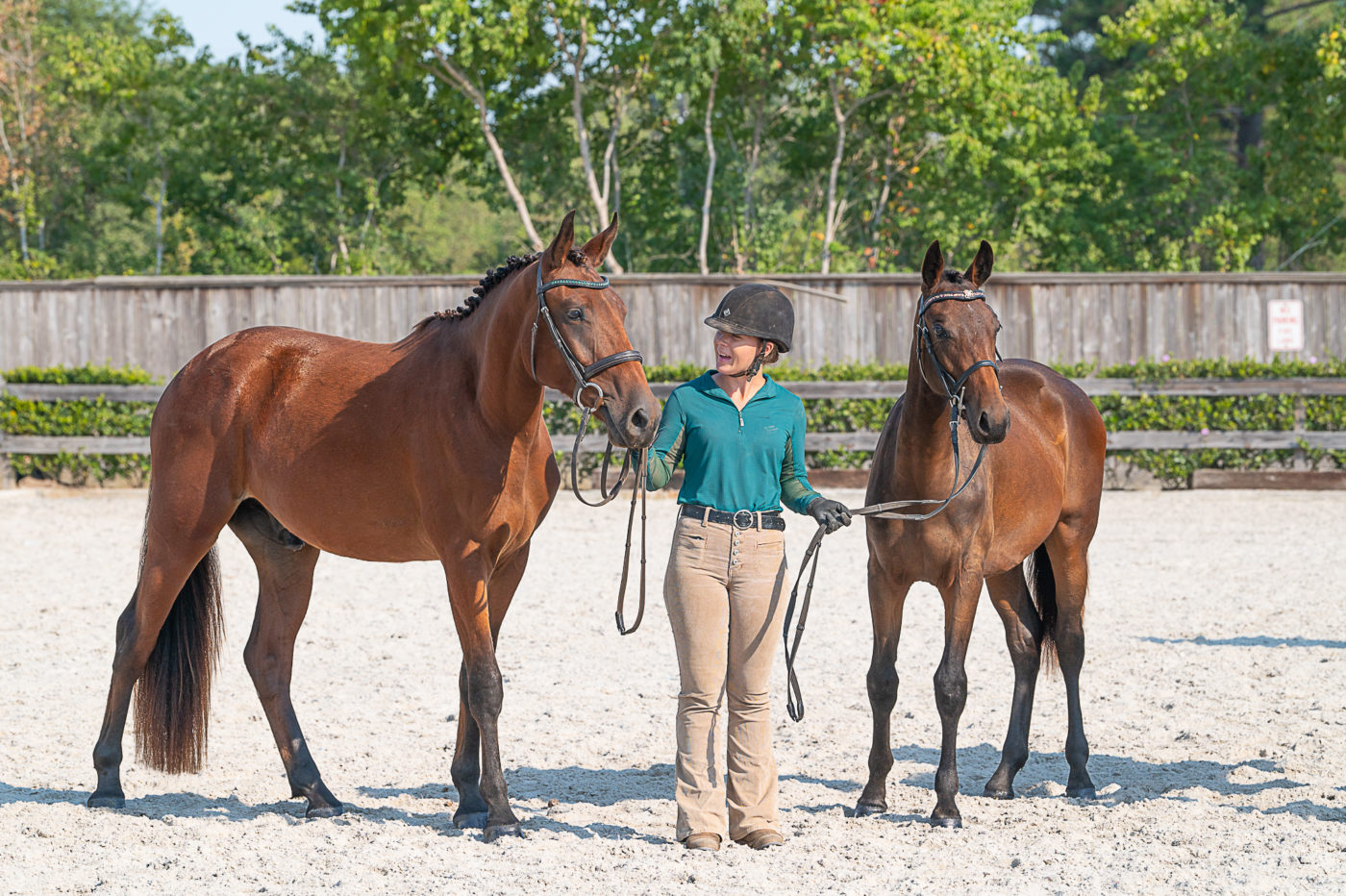 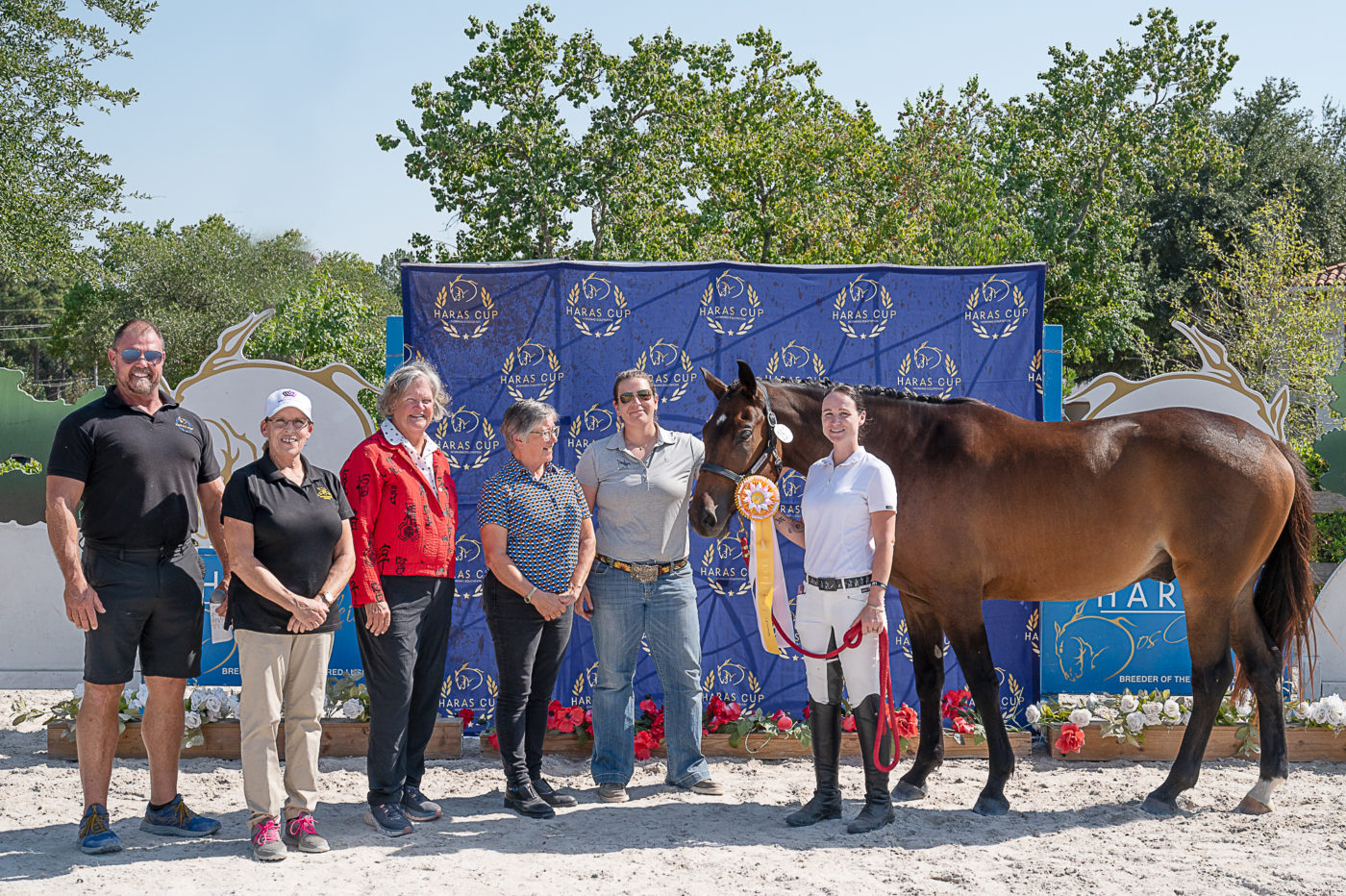