Tamie Smith and Sunsprite Syrius put in the only double clean cross-country round in the Adequan USEA Gold Cup CIC3* this morning at the Galway Downs International Horse Trials to slide into the lead ahead of overnight leaders Frankie Thieriot Stutes and Chatwin, finishing the weekend on their overnight score of 35.2.

“He felt great,” said Smith of her trip around Eric Winter’s track aboard Sunsprite Syrius. “It was a really tough track and I wasn’t sure how he’d read things. I figured I’d go out of the box feeling like he was ready, and he didn't look at one thing; he was super good. I’d already been around it on Wembley and he was crazy - so fit I couldn't even get him focused, barely got to the start box - so I was able to know how everything already rode. I was really proud of him. It’s good too, I’ve been producing him since he was five and we have a great partnership. It was really fun.”

When asked what’s next for Syrius, Smith said they’re just doing one thing at a time for now. “I don't know that we’ll do a CCI this year,” she explained. “He’s going to do this season at Advanced and CICs. We’re just trying to produce him to get really confident . . . I know he’s a competitive horse; he just zipped around [the course] like it’s nothing, which is just a testament to having a partnership with the horse. We will just take it one day at a time and figure out what’s next.”

Owners Don Trotter and Pam Duffy of Sunsprite Warmbloods were on the grounds this weekend, and Smith explained how supportive they have been throughout her partnership with Syrius. “It’s so good having them right at the finish flags. Pam and Don are good horse people; they get that eventing has its ups and downs and I don’t think they had any expectations of Syrius doing anything. We were just going to go out of the box and see how it went . . . I’ve never ridden Eric Winter’s courses before, I didn’t know if it would be a confidence building, learning track. I knew Wembley was up for the challenge, but I wasn’t certain that mentally Syrius would be, he only did his first Advanced at Twin [Rivers] a month ago. It’s fun because there’s never any expectations from them and that horse is just a great horse . . . It’s fun and it’s really rewarding. He’s such a special horse.”

Thieriot Stutes and The Chatwin Group’s 10-year-old Oldenburg gelding Chatwin (Contendro I x Oktav) added 9.2 time penalties to their overnight score of 32.8 to finish second on a final score of 42.0.

The two parted ways at Twin Rivers earlier this month, and Thieriot Stutes explained that Chatwin felt a bit more unsure than he usually does on cross-country. “I definitely had to dig in on him a little bit more today than I typically do,” she explained. “The nice thing is that we know each other so well that in the moments when I said, ‘No, it is right here,’ he did trust me every time and left the ground but I think because of what happened at Twin Rivers he needed me a little bit more today than he sometimes does.”

“I’m always nervous, even jumping the last fence,” laughed Thieriot Stutes, “but it felt good [to put it all together today.] I did feel a little bit tentative in my gallop; usually I’m pretty quick in the gallop but today I stood up in my stirrups and he wasn’t quite as fast. He hasn’t been doing the big ones for a few months . . . Instead of putting the pedal down in the beginning I was kind of feeling myself out and feeling him out, I probably took too many in a few places but overall I was happy with him. I think we both needed today and we both just needed to get back in the swing of things. I still have my 'mom bod' and I’m not quite as strong as usual but I felt like today that when the questions were there and Chat needed me I was able to do my job. You always want to feel like you’re doing right by your horse, especially with a horse like Chatwin who takes such good care of me.”

Andrea Baxter and her 13-year-old Thoroughbred mare Indy 500 (Cromwell x Tens of Thousands) were lying in fifth place overnight after jumping double clean in stadium and adding nothing to their dressage score of 40.0, but a clean round with 8.8 time faults across the country this morning was good enough to boost them into the top three.

“She was amazing,” said Baxter of how her longtime partner felt on cross-country today. “I was a little nervous because I haven’t done much since Blenheim and she hasn’t evented at all. I took her to Thermal and jumped some 1.30m rounds and she was super there, but she hasn’t really schooled [cross-country] . . . I was just looking for a good solid round before Kentucky and she was awesome. I wasn’t planning on going fast, I just went around in a nice rhythm, didn’t wear a watch and just cantered around.”

Smith commented that she hadn’t seen a course design like Winter’s at Galway Downs in quite some time. “I thought Eric did a super job with incorporating terrain and technical questions; you had to ride for every combination . . . I’m ecstatic that Eric’s been able to be so creative and give us a challenge. The results across the board made it obvious that it was hard.” Of the seven-horse field in the CIC3*, two horses picked up a single refusal, both at the final element of the downbank combination on the backside of the course: Helen Bouscaren and Ebay and Tamie Smith and Wembley. Derek di Grazia and Ringwood Justice elected to retire after two refusals at fence 7A, the first of two brush corners. Only Smith made the time.

The overnight leaders in both the CIC2* and CIC* remain unchanged after cross-country with both division leaders jumping double clean to take home wins in their respective divisions.

“He is a fantastic cross-country horse, I mean that certainly is his strength,” said Miles of Greenfort Othello (Radolin x Sevarine), Tara Verkuil’s 13-year-old Irish Sport Horse gelding. “When I first started riding him I knew that the dressage and the show jumping were going to be a lot of work but I felt like he had the potential to go four-star. But you never know, on cross-country something can always happen, you never take anything for granted. But he felt fantastic, really good, really fun. It was a tough time to make on the course, I think there’s a lot of great gallop stretches here but by adding in a few little twists and turns, coming up into the arena, stuff like that, that takes time. You had to really stay on top of it to get the time done. When I first started riding him, he had a big stride but he wasn’t super maneuverable, so he’s improved his ability to make time.”

Miles explained that her tentative goal with Greenfort Othello for the spring season is to compete at the CIC3* at Rebecca Farm in July. “We had originally been planning for the CCI3* at Rebecca but we backed off on that, just trying to give him more time to get strong and get that clear show jumping down and get that solid. It’s great to run around Advanced but if you’re knocking a bunch of rails down, why [would you?] So, we pushed that back for maybe the CIC3* there instead of the CCI3* and just give him a little bit more time for his strength to catch up. For me, I’m just so pleased for him to be able to finish on the clean show jumping. To me, of all the wins I’ve had, that means a lot to me because it didn’t just come easy. It really was two years in the making to make that happen.”

The Galway Downs International Horse Trials will wrap up tomorrow with the Intermediate, Preliminary, Open Training, and Training Horse divisions completing their show jumping phase while the remaining Training divisions and all Novice divisions ride cross-country. 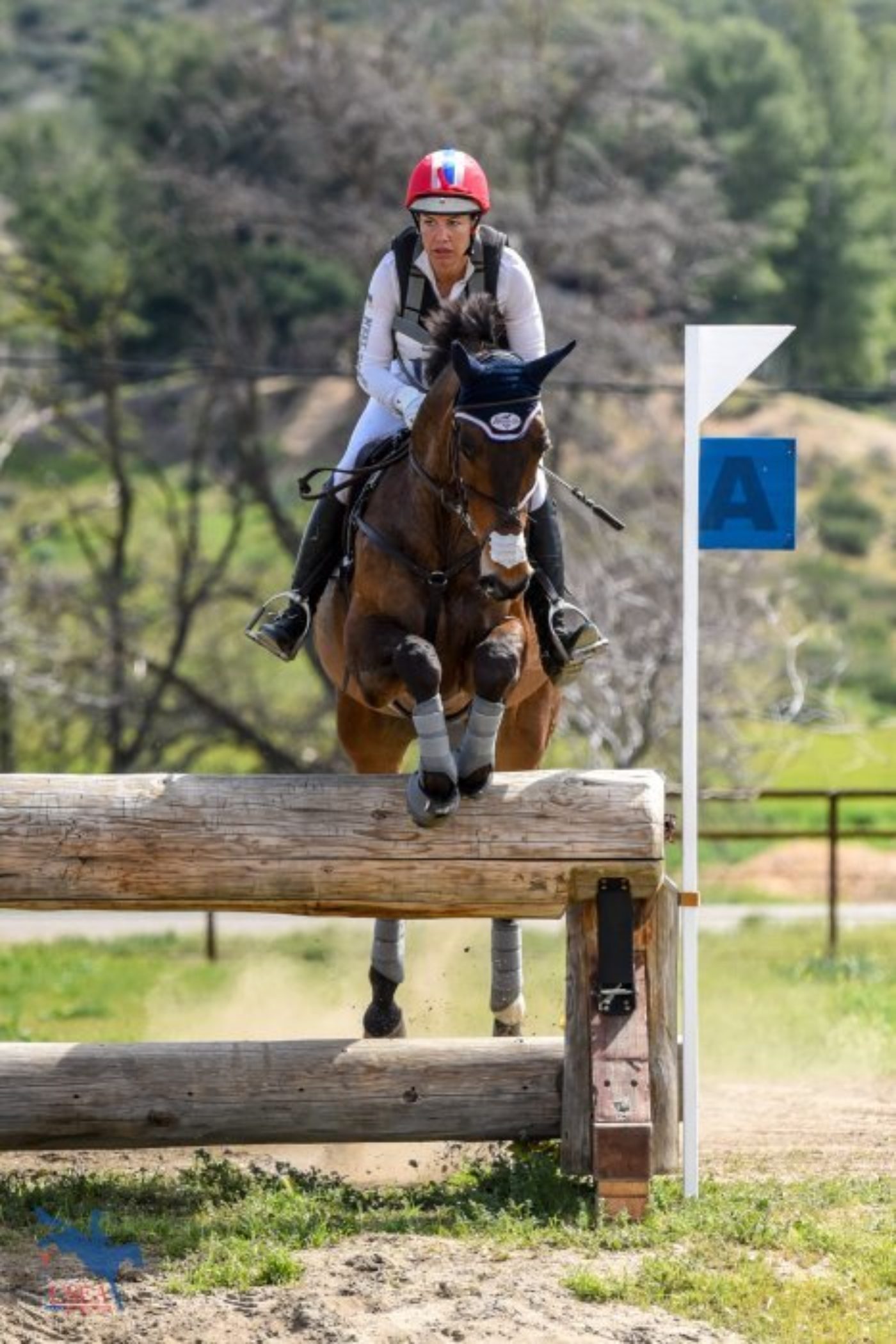 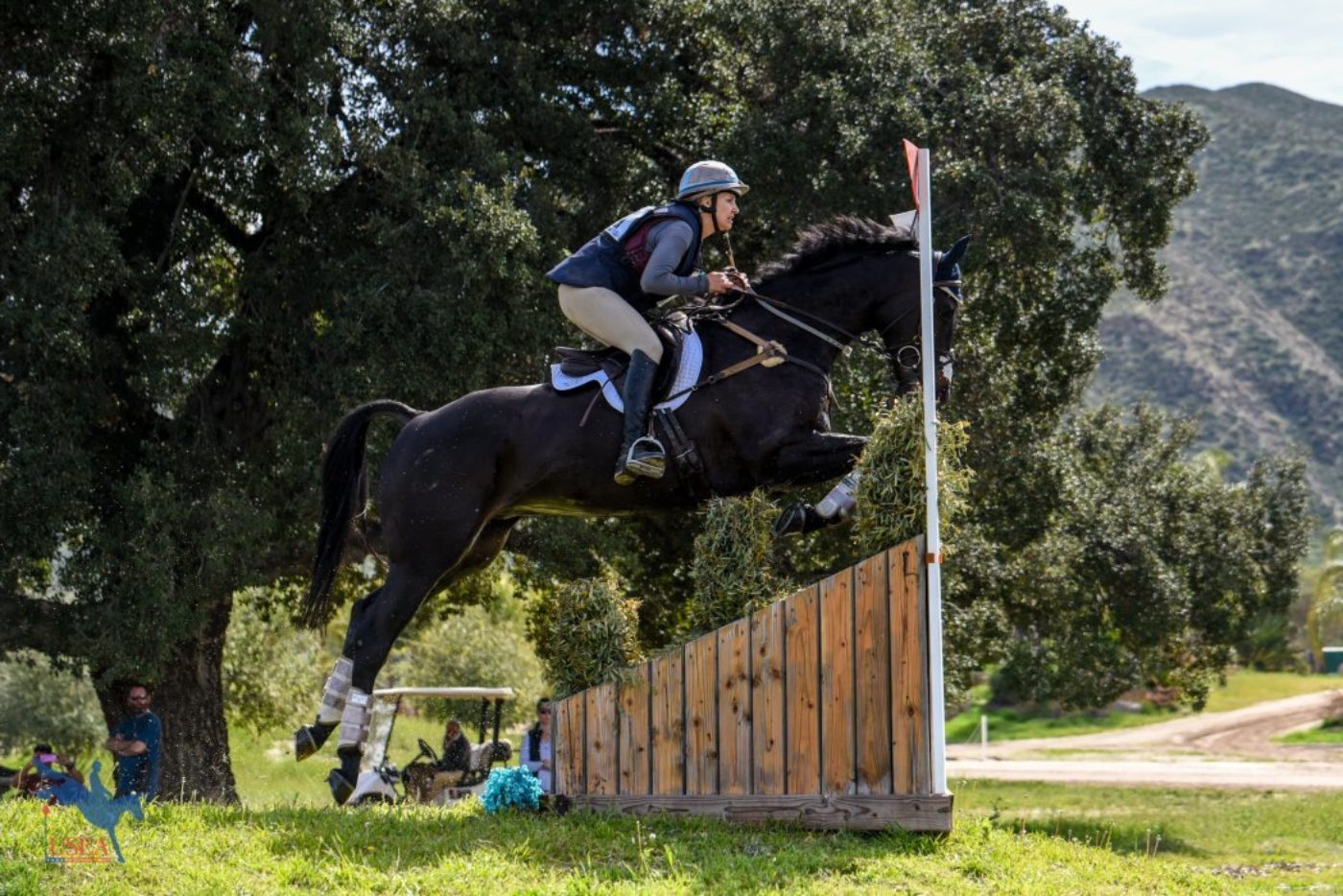 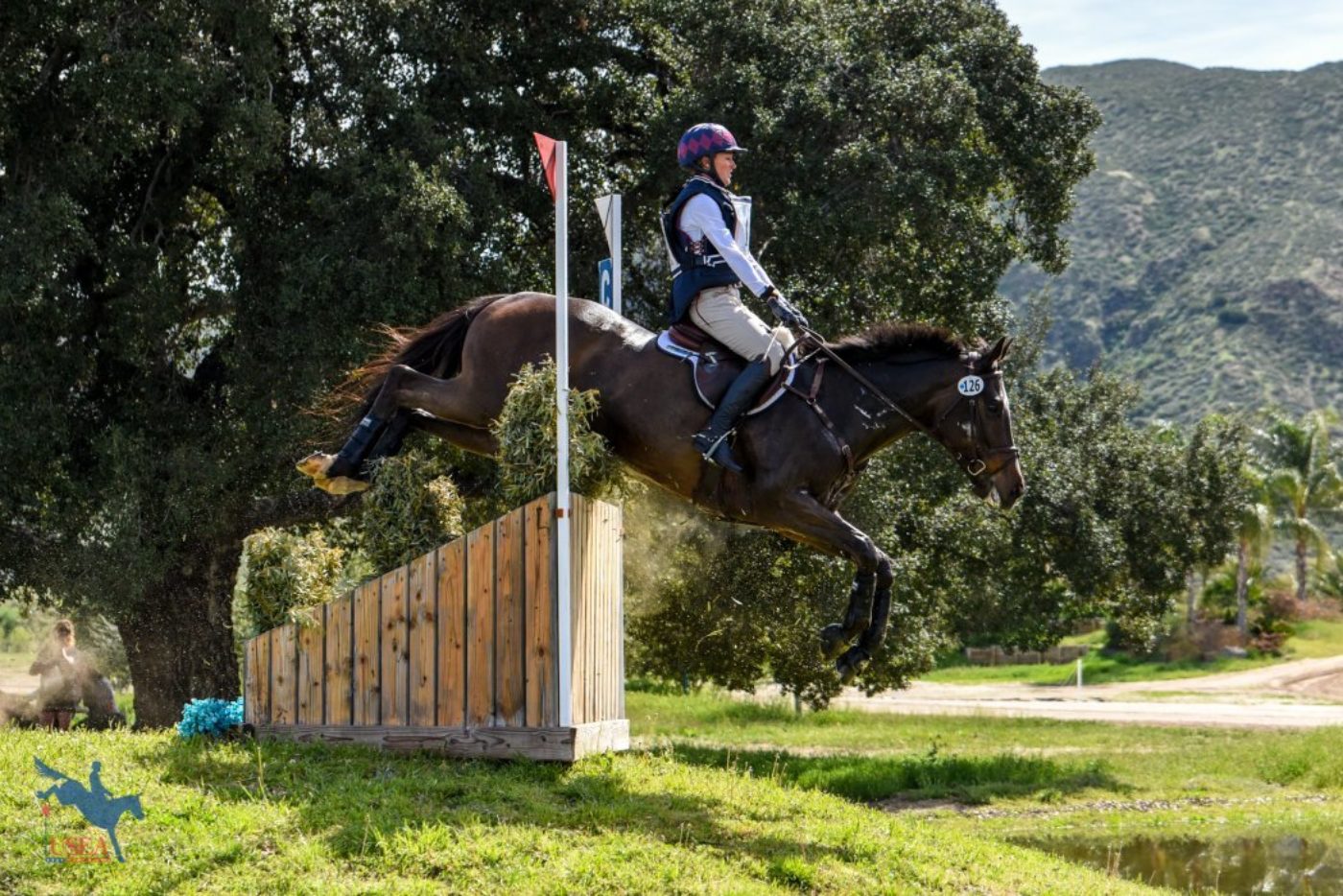 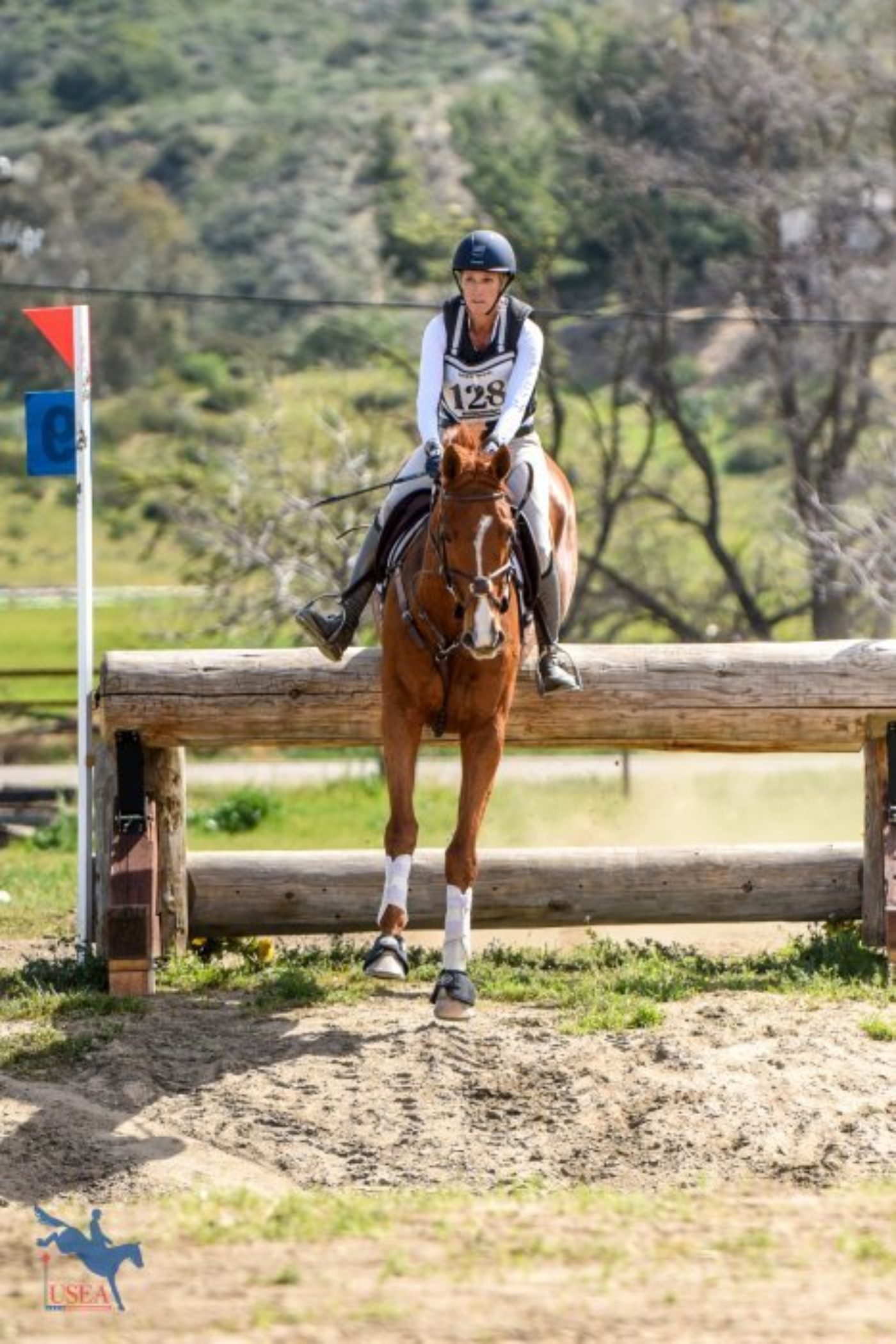 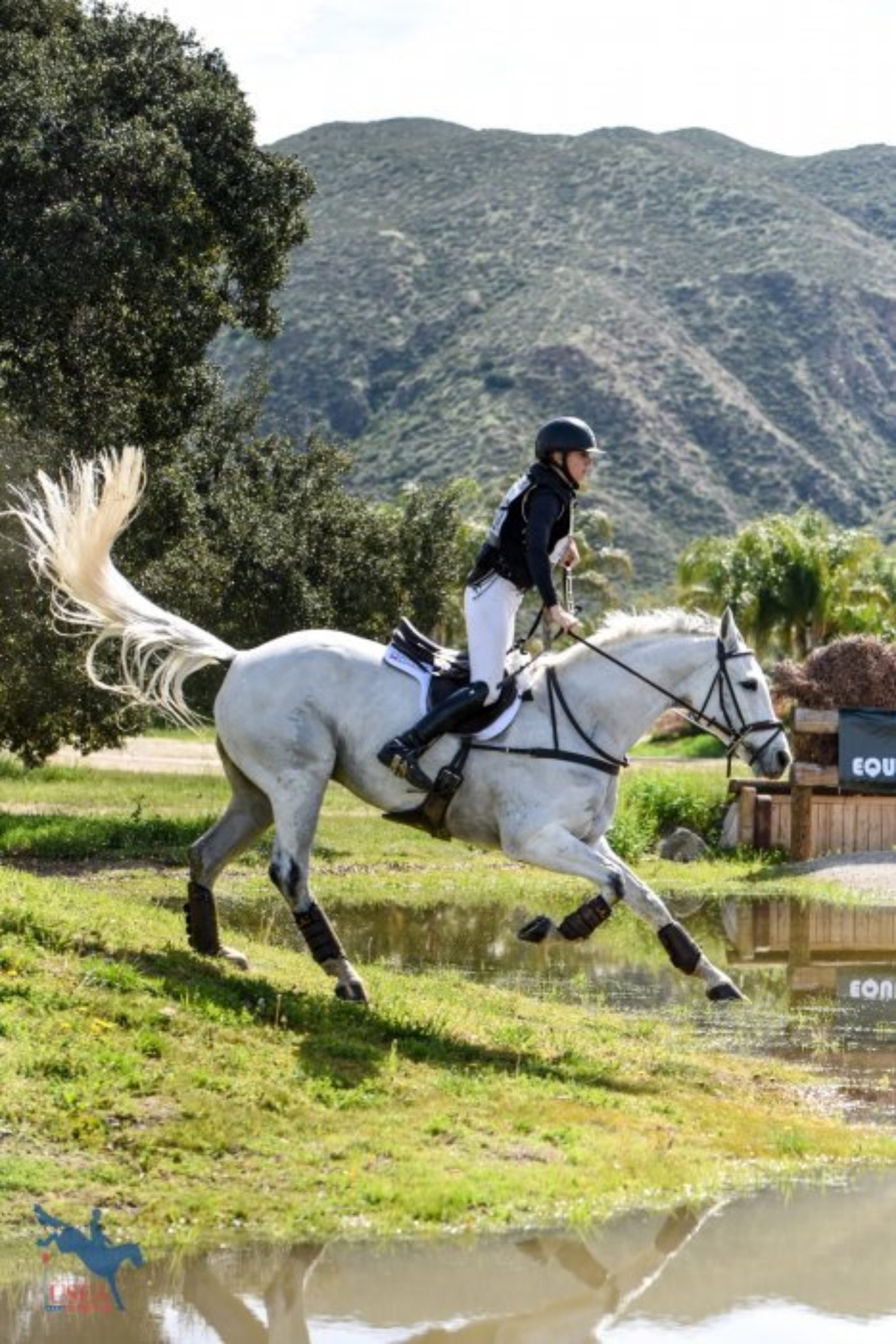 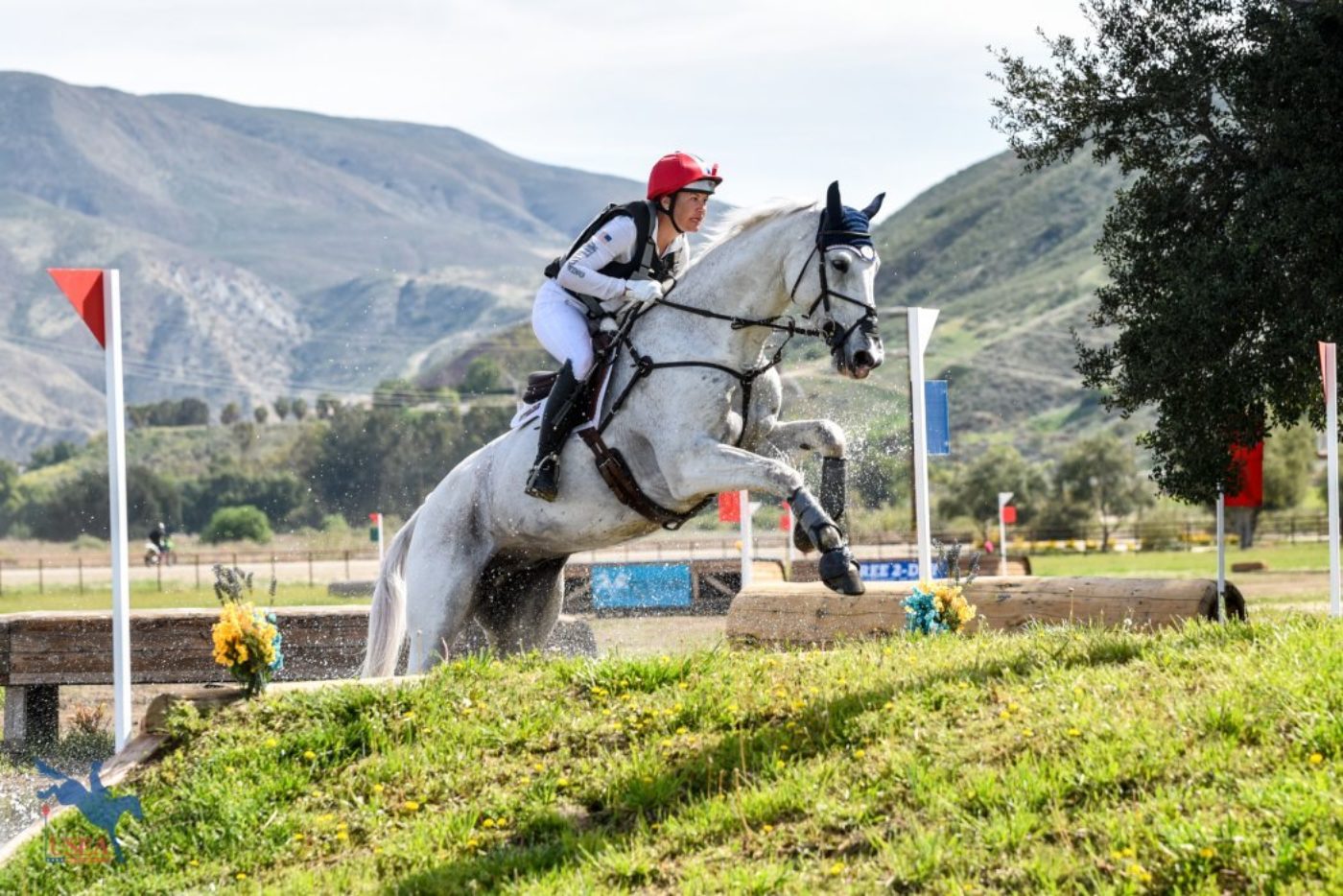