The USEA Emerging Athlete (EA21) Regional Clinics continued farther down the West Coast yesterday to the picturesque town of Paso Robles, California. Nestled in the countryside between rolling hills and vineyards, the beautiful Twin Rivers Ranch played host to this invitational event.

The very accomplished four-star rider Rebecca Brown, who also taught the EA21 Regional Clinic in Yelm, Washington earlier this week, made the journey south to take twelve selected riders under her wing for the two-day clinic.

Light showers fell on the sunburnt valley as the group had their first meeting to discuss the principles of dressage: Brown placed a strong emphasis on knowing the German training pyramid, “If you are going to be an expert, you need to be as educated as you can be on each step in the pyramid," said Brown, who is the daughter of a dressage judge. “Dressage equals shaping the energy.”

She continually impressed upon the riders that dressage is more of a mental game than a physical game. She also emphasized that to be efficient on cross-country it comes down to having a ridable horse. “It’s oftentimes not even the most talented horse that wins, it’s the most trained horse that wins,” insisted Brown.

The first group consisted of Maddie Smith, Lizzie Lynch, and Elsa Warble. As they warmed up Brown urged the riders to keep the basics in mind. She also encouraged them to watch the other riders in their group and mentally note what they thought each horse needed to improve.

The basics, for Brown, include the rider's position and how it influences the horse. The upper body is for controlling the hind end, the seat and legs are for controlling the middle of the horse, and finally and most importantly are the arms and hands which are the guides.

To prove this theory, Brown made minor adjustments to each rider's position. With these adjustments of just having the rider sit up an extra few inches, each horse visibly became lighter. The riders were able to ask for more forward and get their horses to move from behind.

For one rider needing help controlling her position, Brown took a piece of bailing twine and made a strap across the dee rings for the rider to hold onto. The idea was to freeze the hands so the rider could concentrate on the rest of her body, which enabled the rider the ability to make subtle adjustments in her body that were extremely helpful to her horse's balance.

With a continued emphasis on the basics, the second group of riders included Taylor McFall, Julia Beauchamp Crandon, and Amanda Boyce; they worked on position as well as straightness.

Taylor Mcfall who rode her OTTB, was quite pleased, “He’s not the fanciest so we have to go the extra mile to show well,” says McFall, “She (Brown) was able to see we weren’t straight and after improving some really basic stuff everything seemed to get better.”

Brown confidently reassured the riders that it isn’t the fanciest horse, it is the one who is consistently straight and rhythmical that leads after dressage.

Brown was able to make quick evaluations of each horse and rider. The third group of riders, Annabell Nieman, Emma Weber, and Sarah Ross came into the warm-up and after only a few minutes, Brown had Weber and Ross switch horses.

“I did this because the riders and horses are similar enough but are at different places,” said Brown. “It can be like a marriage when you have been riding a horse for a long time, you can get talked into and out of things you don’t want to do”.

The assignment proved to be a success. “It was beneficial for me to ride a horse that naturally has what my horse lacks,” said Weber, “It helped me create the feeling that I needed to implement into my own ride.”

It was onto the final group of protégés as Ella Garcia, Natalie Kraus, and Audrey Sanborn made their way into the indoor arena for the hottest lesson of the day.

It was instantly pointed out that Kraus's horse had a much better gait at the canter than the trot. “All professionals evaluate a horse's walk and canter when they are looking for a prospect,” said Brown, “the trot can be fixed.” And with that she had Krause do a series of leg yielding in and out on a circle paying very close attention to maintaining the straightness on the circle. It wasn’t long before her mount was tracking up beautifully at the trot.

The other two riders did leg yields in a straight line with small circles to help create the desired straightness. Once straightness was established she had the riders abandon the circles and take more straight steps on a line.

As each set of riders came in for their lesson the theme was quite clear: basics, basic, basics.

With marked improvements in every group, it was clear how important it is to continually work on the fundamentals. “Today we worked on the basics, we are trying to create a standardized curriculum across the United States at all these clinics”, said Brown, “I’ve always been impressed by the California riders…the riders here all seem to have a very good understanding of dressage”.

Brown credits her mother for a lot of her success in the sandbox. She states the formula is simple, B + C +/- M = S. The B is for Basics, the first thing a judge looks for. The C is for the Carrying out of the directives, and the M is all the rest: is your rhythm exceptional, did you have a crisp transition, and other variables? The S is the sum of all of that put together.

Riders are looking forward to day two of the EA21 clinic with Brown where they will be put through their paces in the jumping ring. 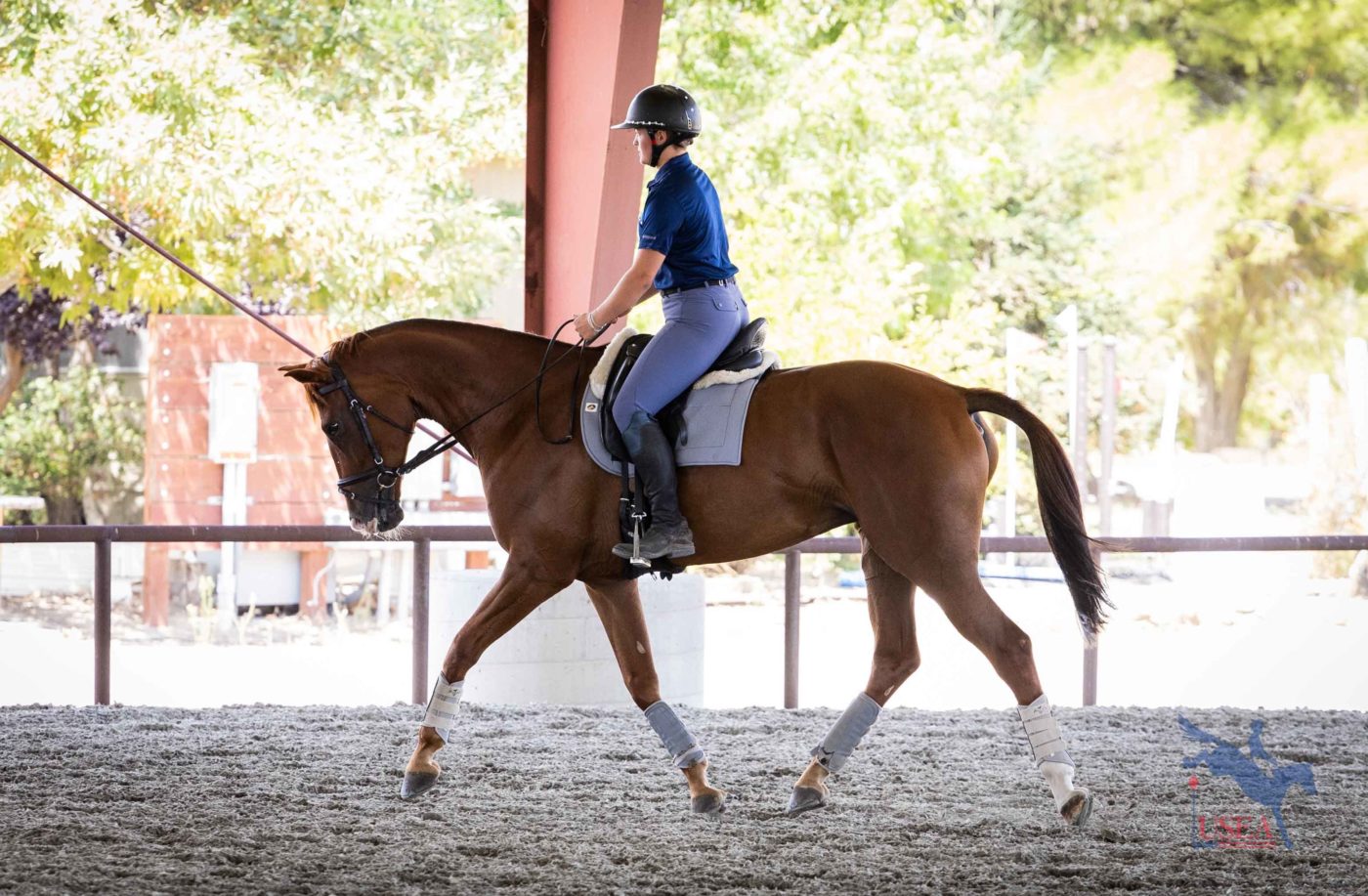 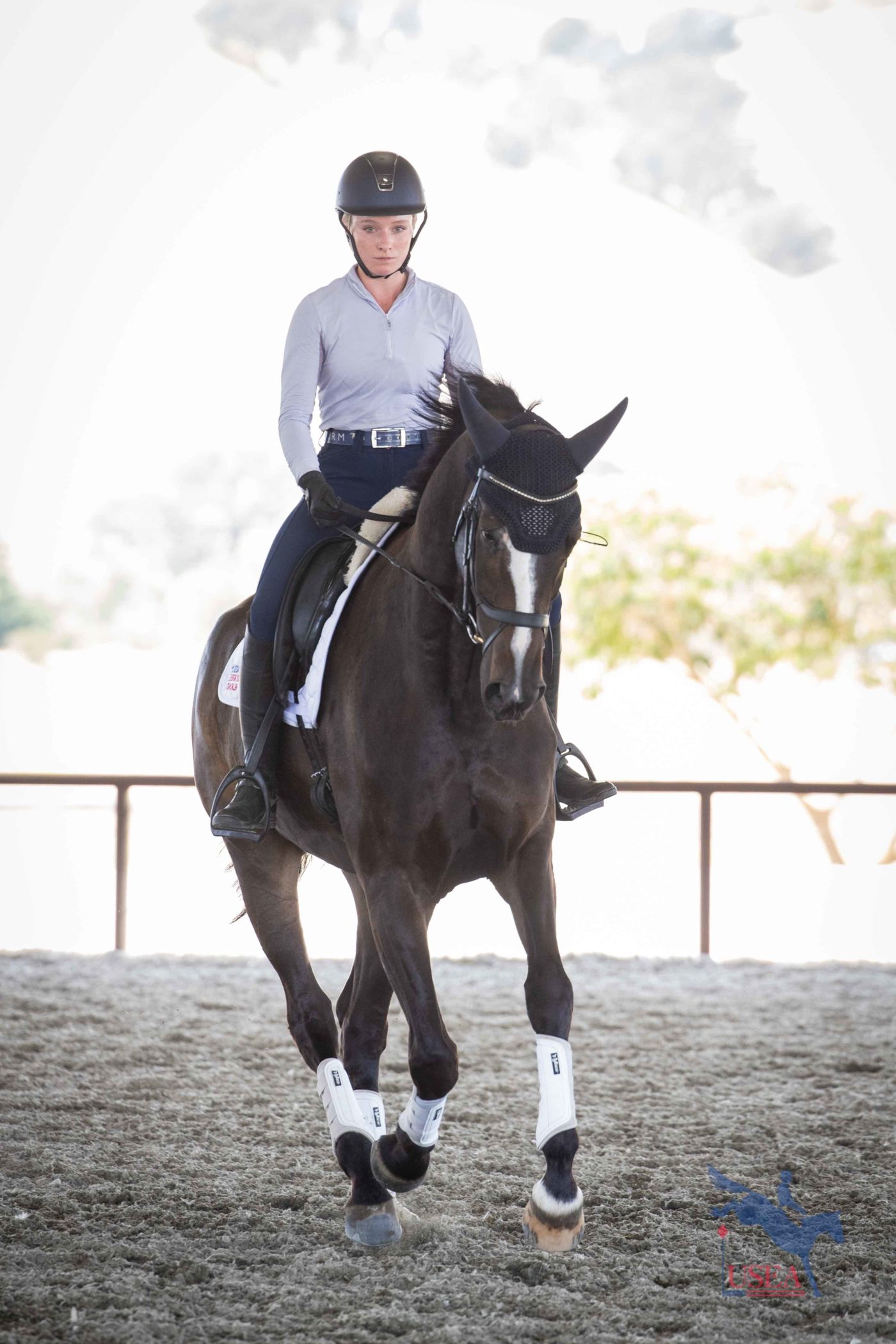 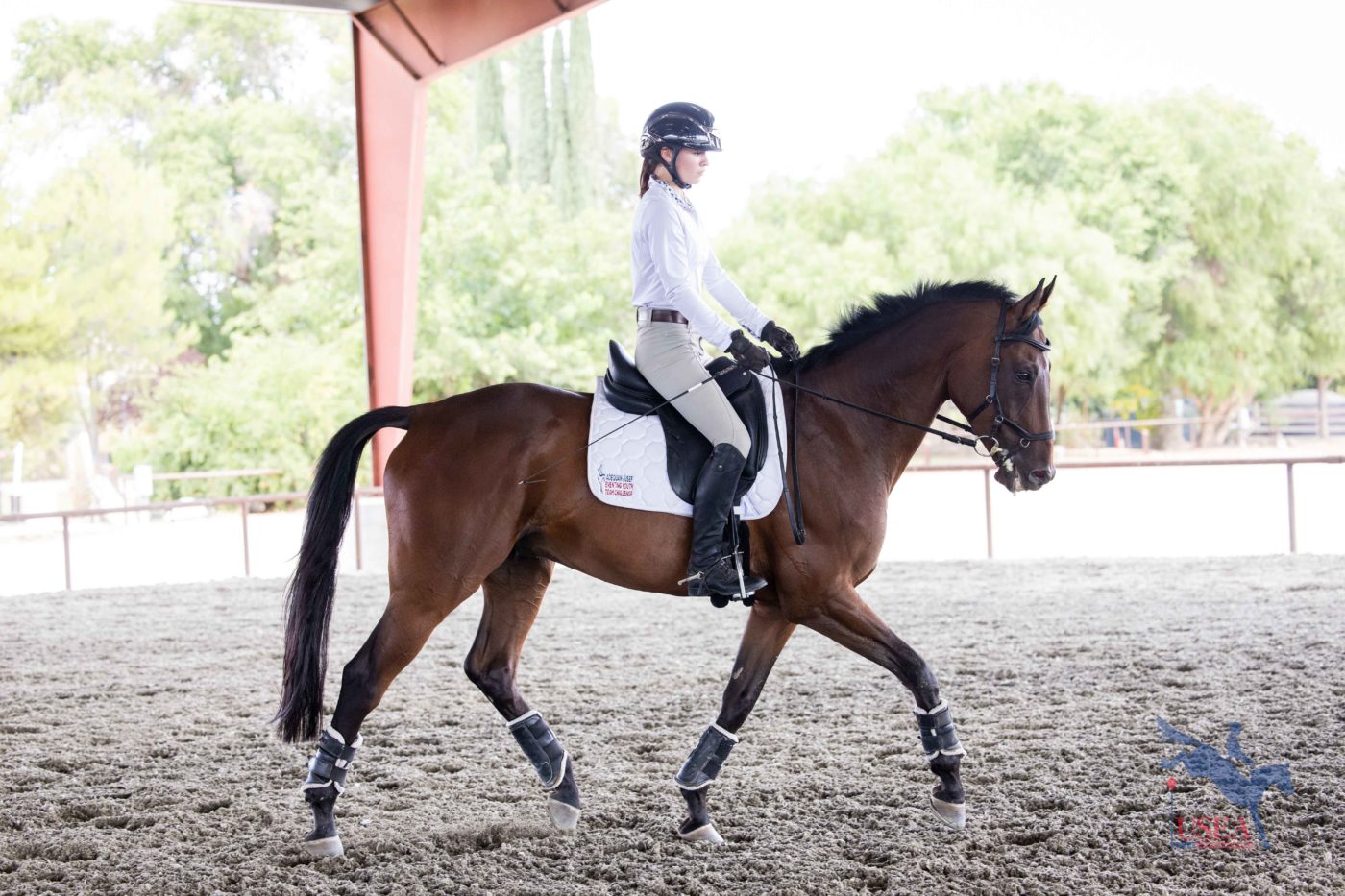 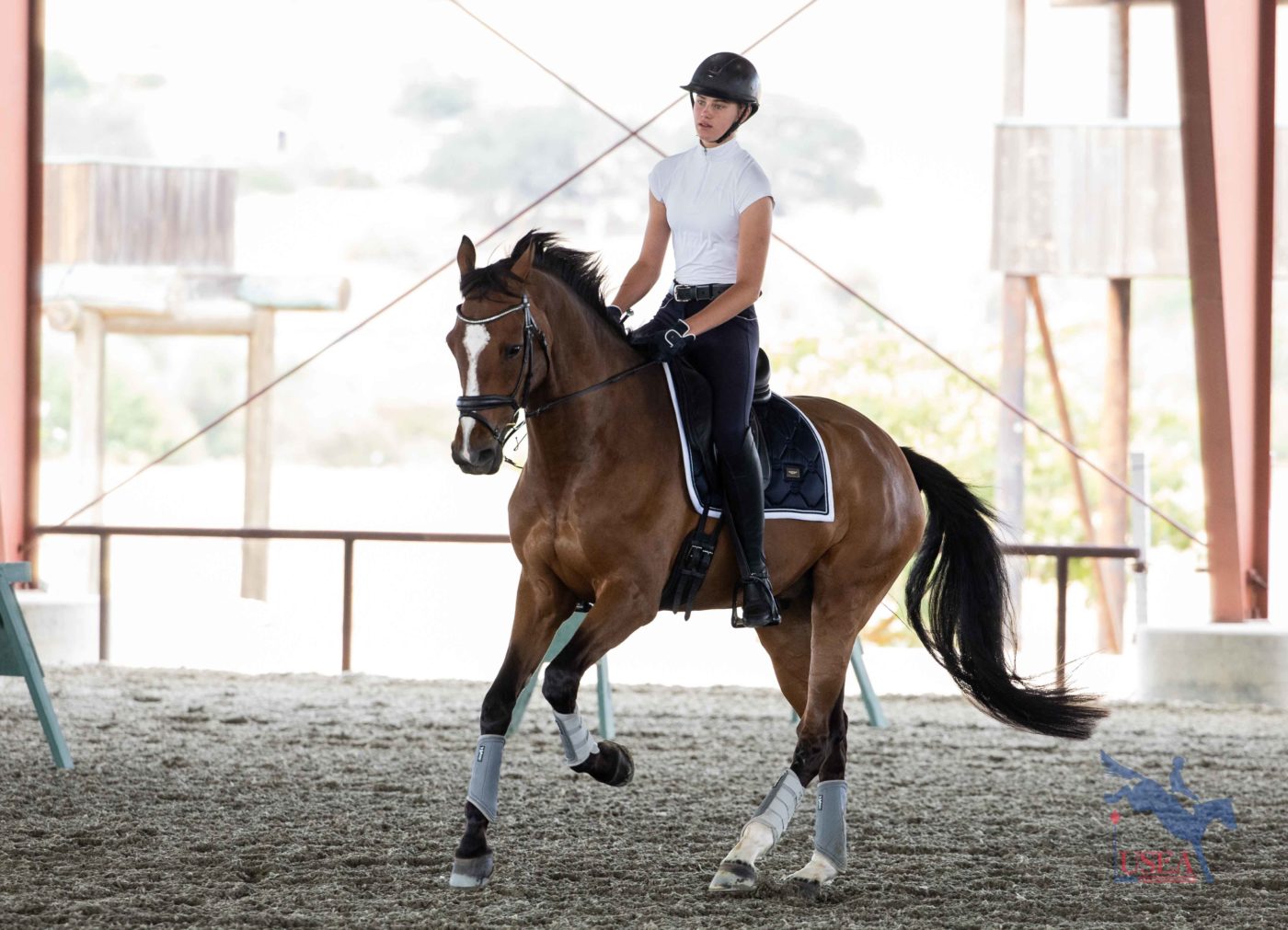 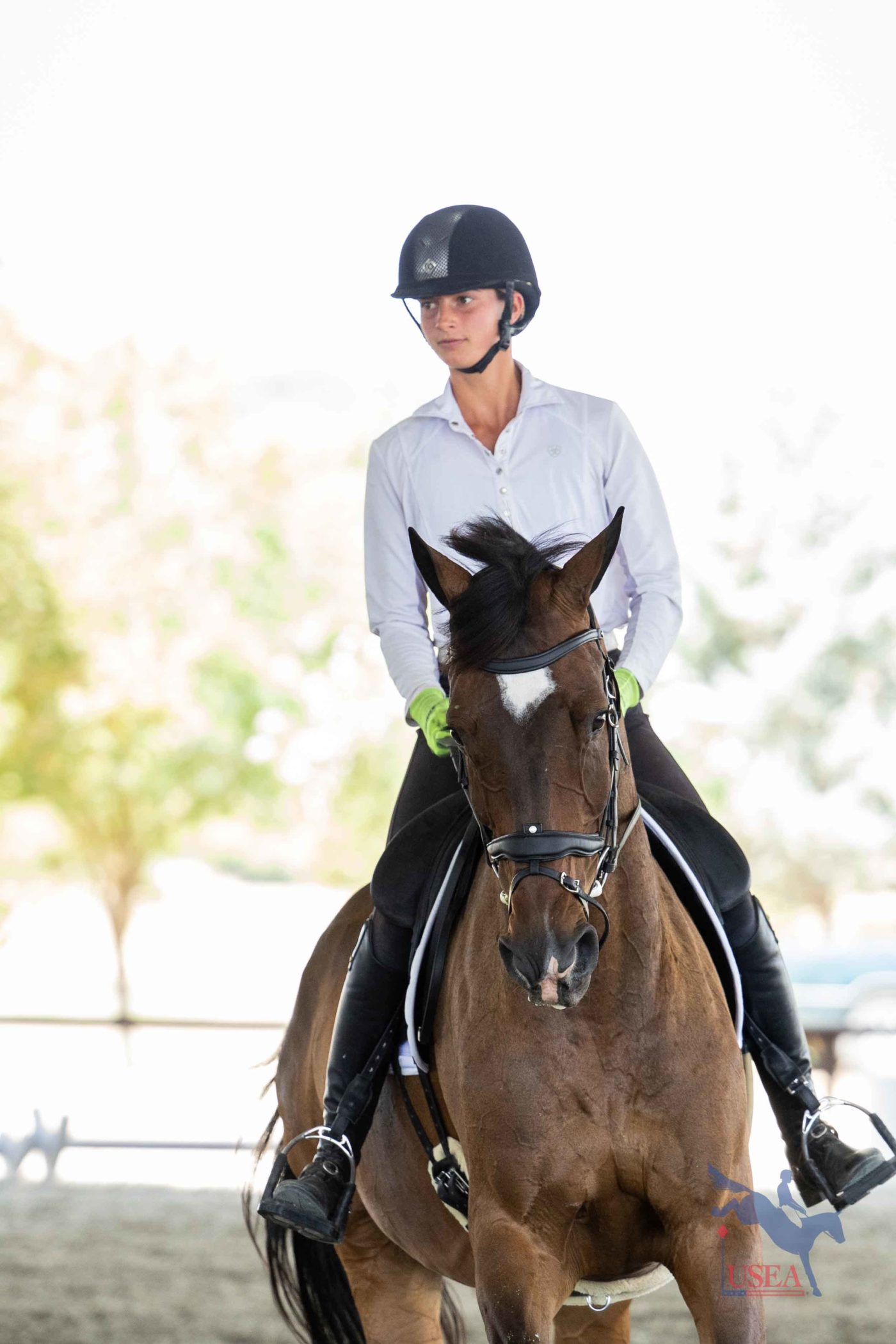 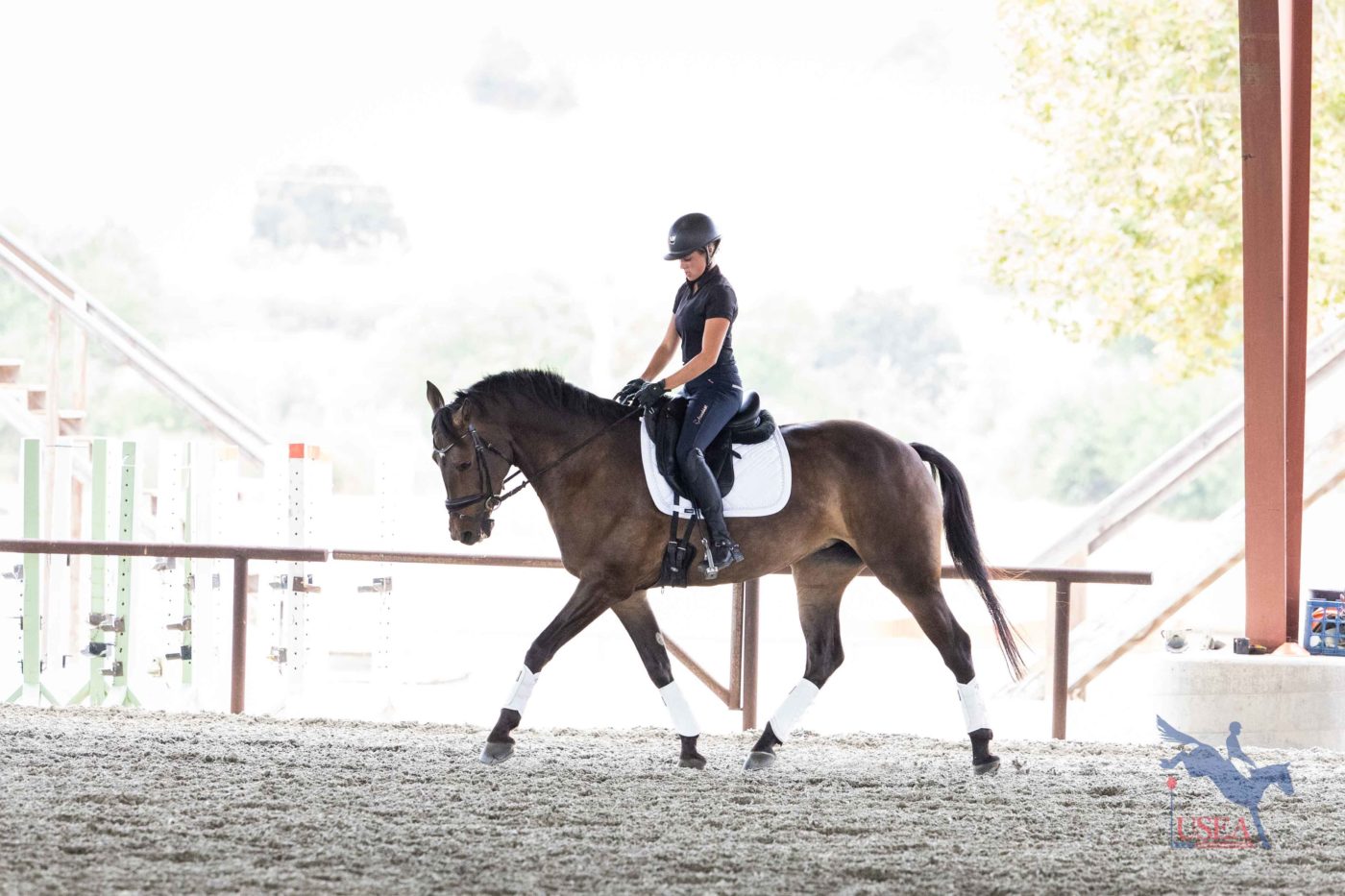 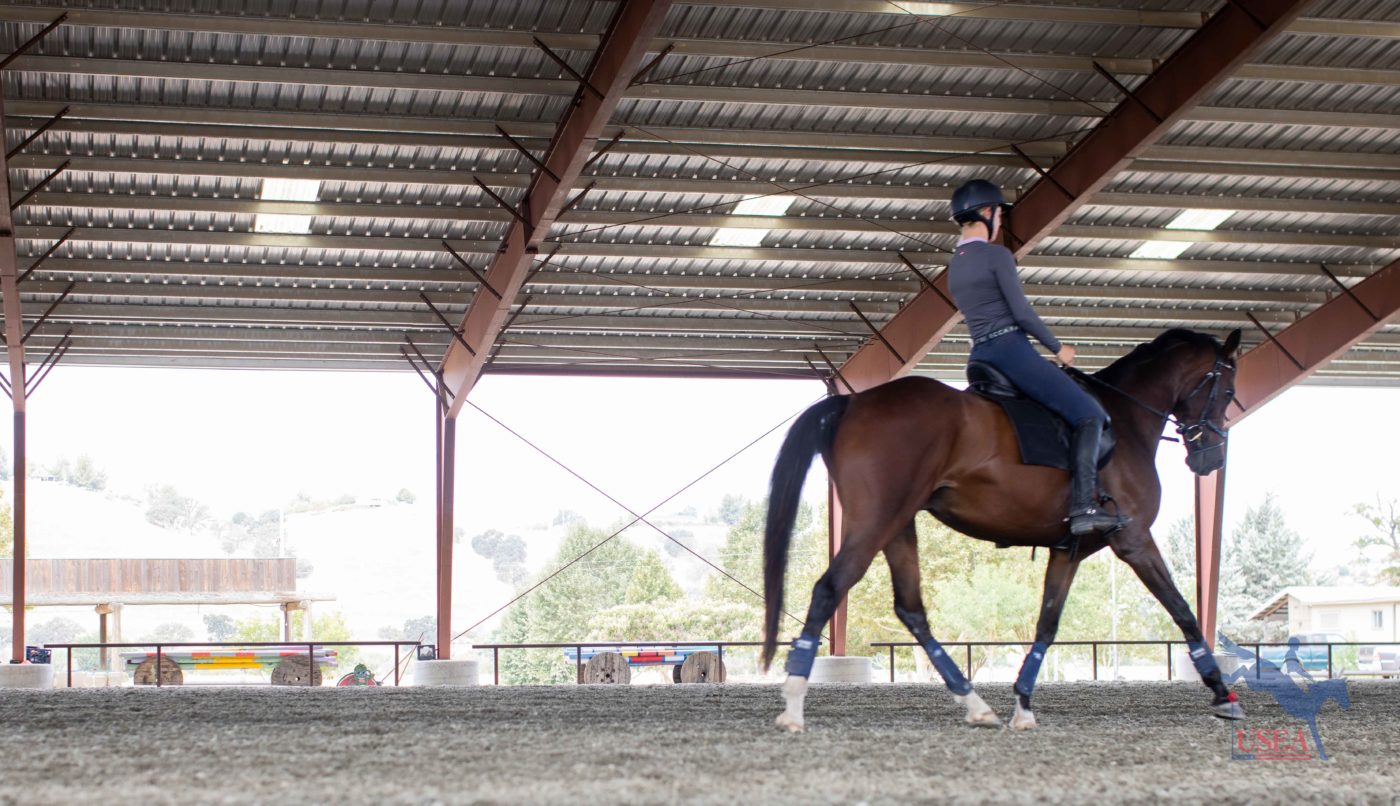 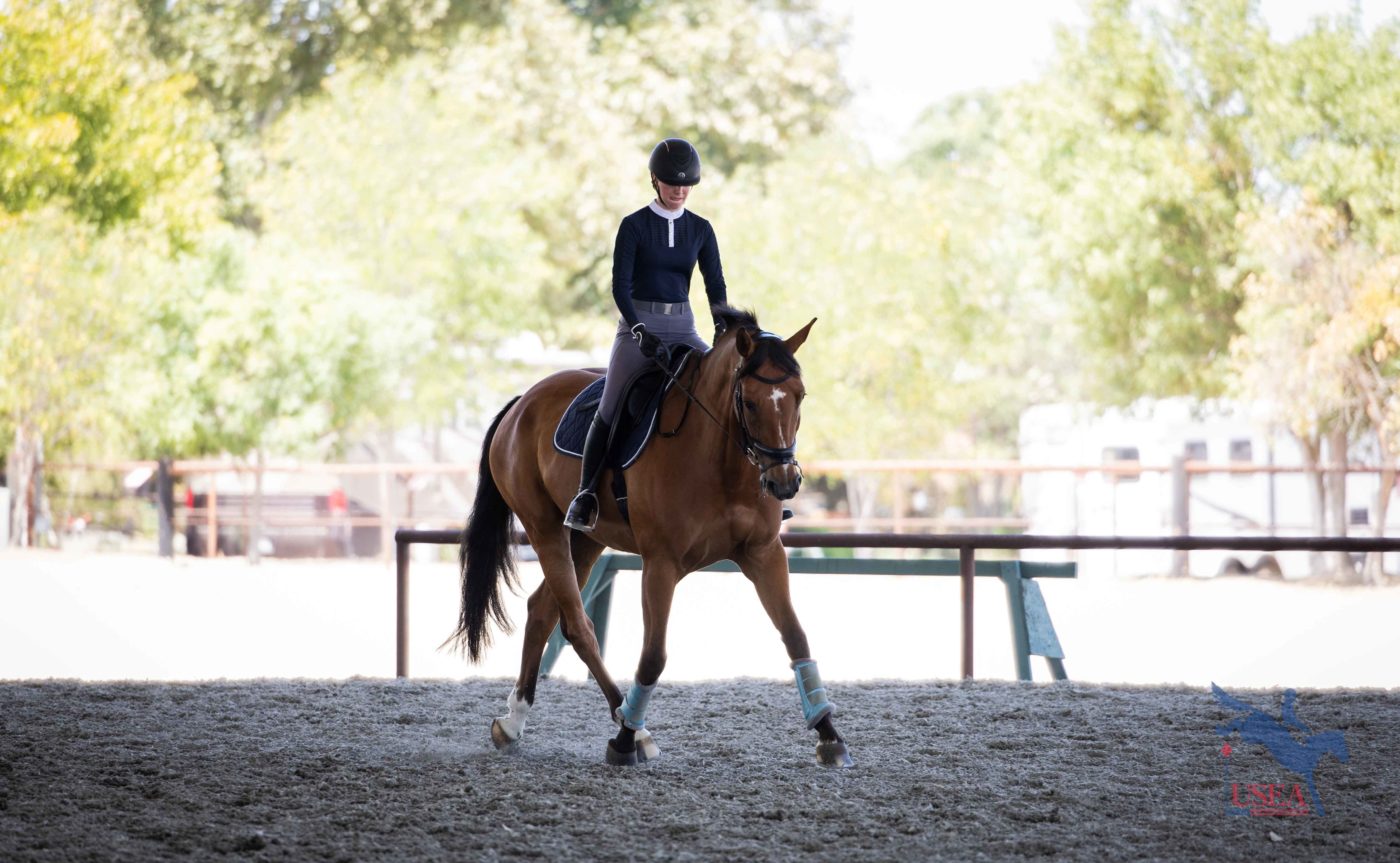 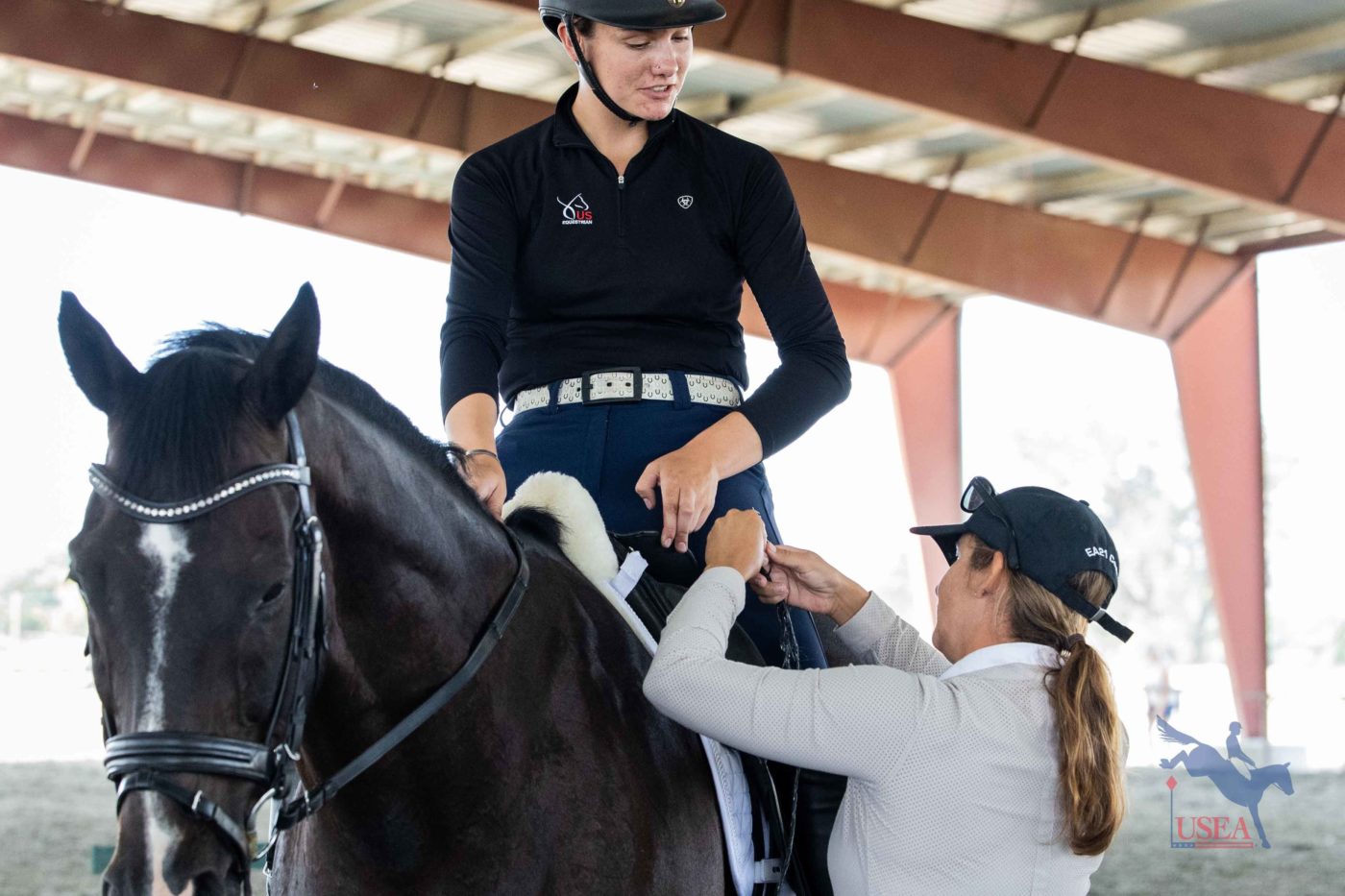 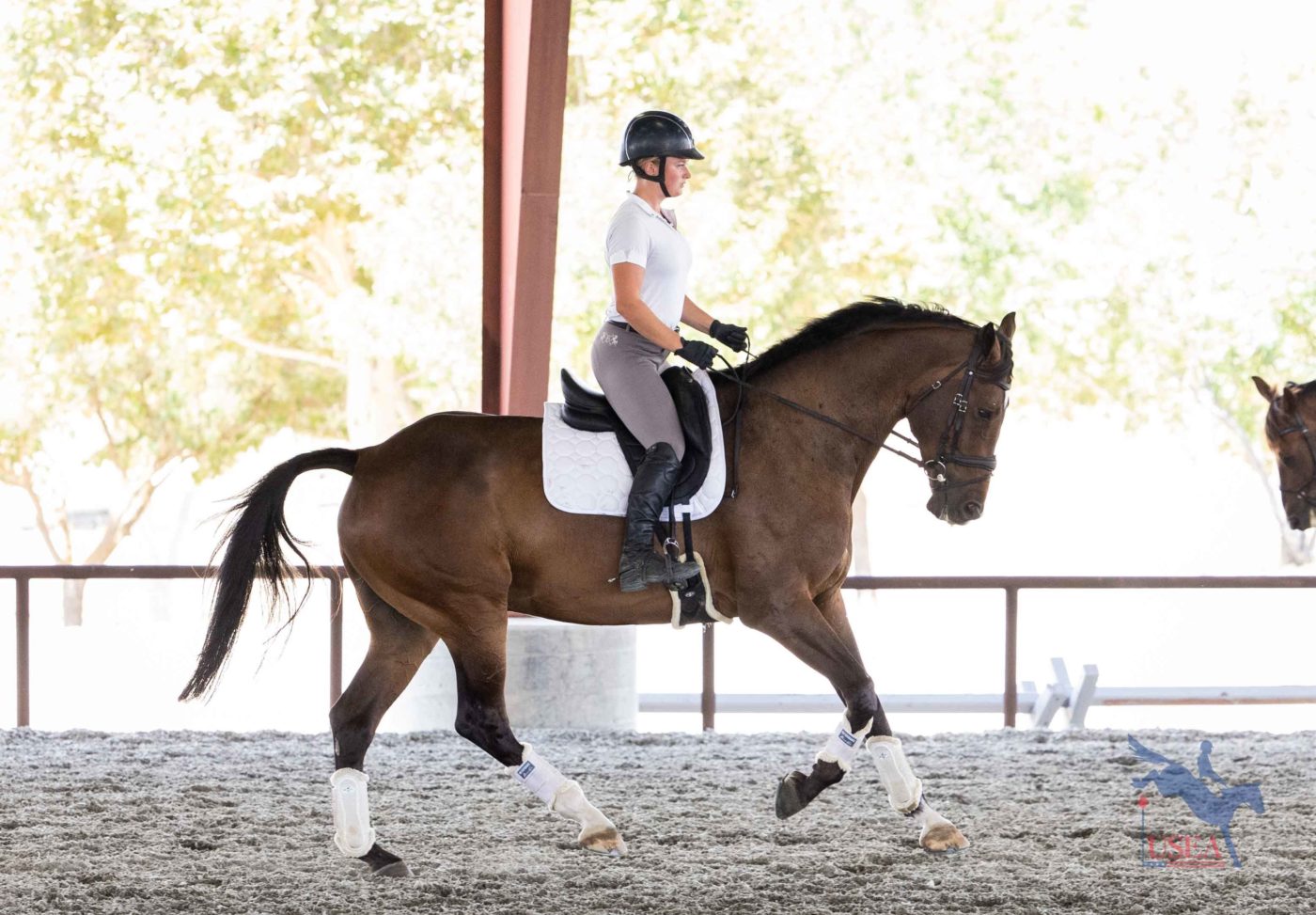 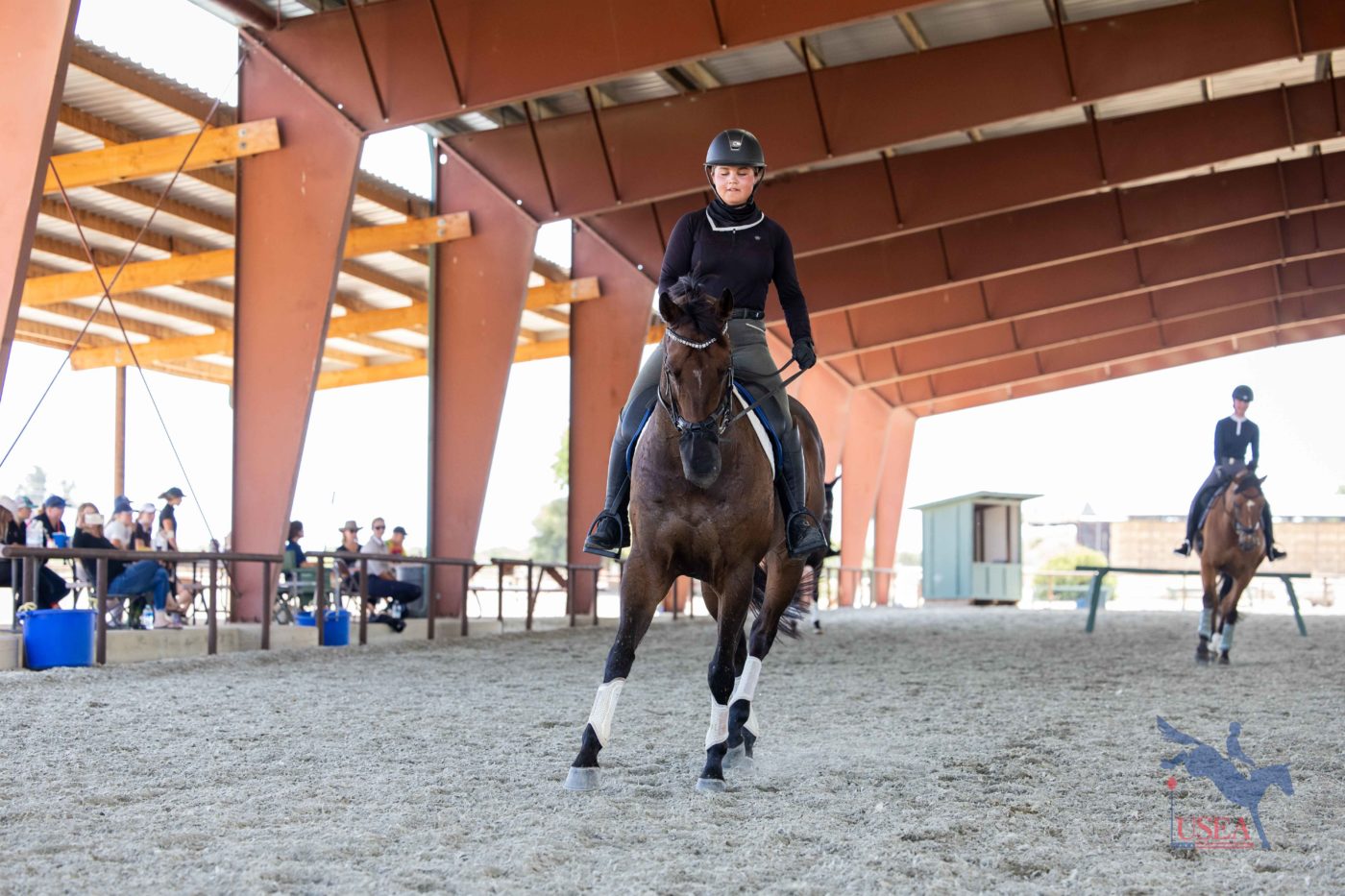 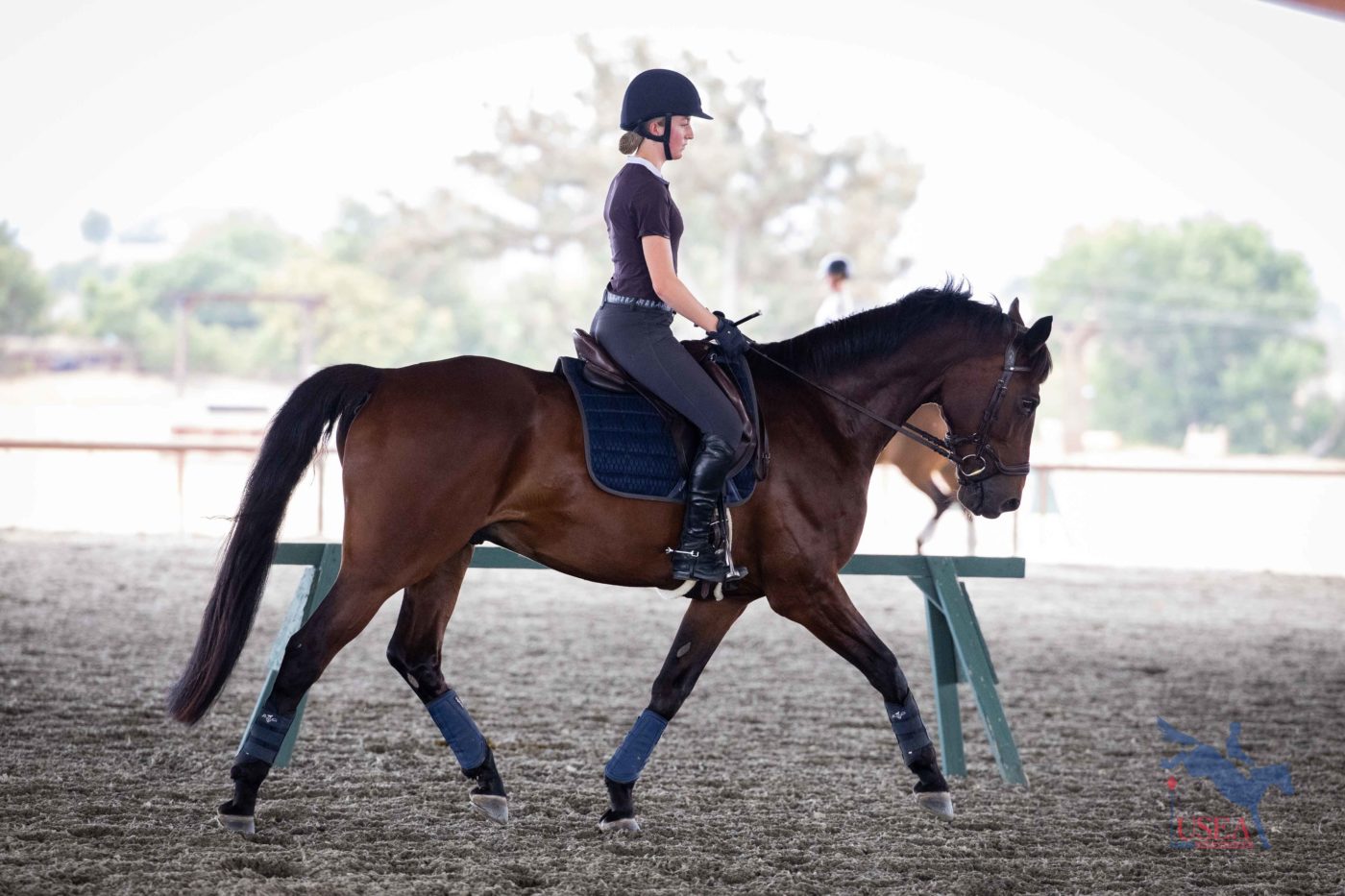 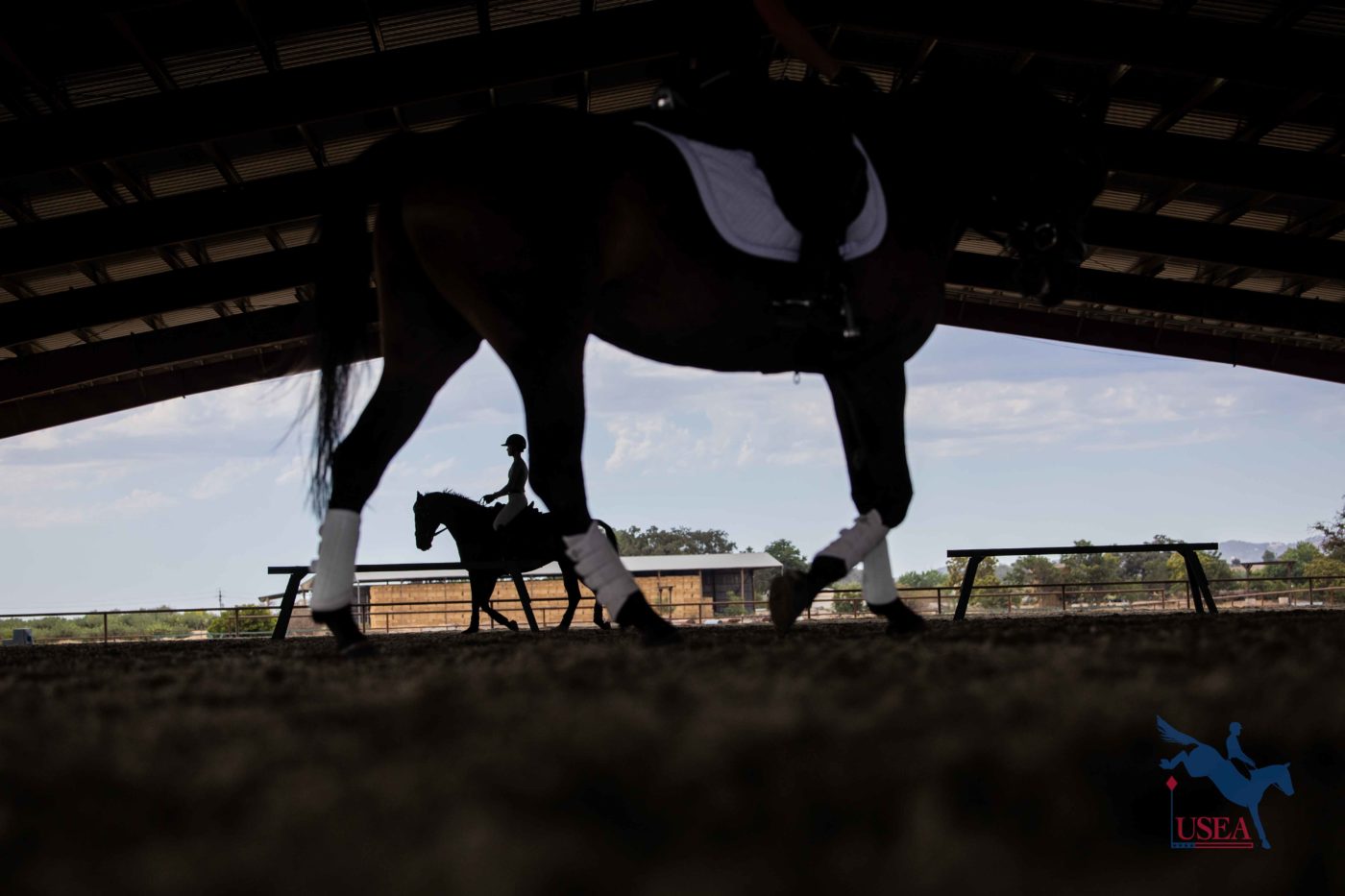