Sandro’s Star Shoots to the Lead in Big Sky Montana

The scores are tight at the top in the 2018 Adequan USEA Gold Cup CIC3* division at Rebecca Farm, but it’s Sandro’s Star and Chris Talley who came out in the pole position after the dressage phase. Scoring a 29.3, Talley was able to put himself and Hannah Salazar’s 10-year-old Oldenburg stallion (Sagnol x Poetic Patter) in first place position heading into tomorrow’s cross-country phase.

“I actually started out in the CCI3*, and I got a call yesterday saying that we weren’t actually qualified for the CCI. Fortunately, they had room and they put me in the CIC3* so I was still able to compete,” explained Talley. “Sandro was really good and put in a really good test. I struggle the most in the flat, but I work with his owner, Hannah Salazar on the flat, which has been great. There were really good moments in his test today, and I was really happy with him throughout the whole test.”

“Getting to Montana is a journey, but the [Rebecca Broussard Travel Grant] helped an enormous amount. We fundraised at home, and we had a good win at Devon which helped, but the Broussard’s grant helped make it all possible, so I have to thank them.”

Tamra Smith rode a quality test aboard Judith McSwain’s Fleeceworks Royal (Riverman x Marisol), scoring a 31.0 to sit in second place. The 9-year-old Holsteiner mare is a USEA Young Event Horse (YEH) graduate, who won the Holekamp/Turner Grant that enabled the pair to compete at Le Lion d’Angers, the World Young Horse Championships, in France two years ago during “Rory’s” 7-year-old season. Smith and Rory also won the CIC3* division here at Rebecca Farm last year, so returned to defend their title in 2018.

“Rory is 9 this year and normally I have to work her down quite a bit to get her rideable in the test. She’s just gotten stronger and better, said Smith. “During warmup, I went to the ring that was near cross-country, and that lit her up. We had some tense moments in our test. She tried to halt at X, but we needed to halt at I – we just had little mistakes – she cantered in her shoulder-in, was late in a change, but overall the suppleness was really there, and I was really happy with the overall quality. So since the overall quality was so good, I was really pleased. It was a really good educational test and she’s just such a great horse for the future.”

Rounding out the top three in the Adequan USEA Gold Cup CIC3* is Jordan Linstedt and her own 15-year-old Hanoverian gelding, Revitavet Capato (Contendro x Annabelle). The pair earned a 31.7 to sit closely behind Smith.

In the CCI3* division, Frankie Thieriot Stutes and the Chatwin Group’s German Warmblood, Chatwin (by Contendro) effortlessly took the top ranking in dressage, scoring an inspiring 26.9. “I thought Chatwin was so good. Tamie [Smith] has helped me so much this weekend, as has my friend Kelly [Prather]. Chatwin is just so fun to ride, and it’s such a fun thing to get to sit up there on him,” said Thieriot Stutes.

Thieriot Stutes is one of the many people here at Rebecca Farm that’s wearing many hats, as she’s both working and riding. Thieriot Stutes is an on-camera personality working in broadcasting for the event, as well as riding in the highest level offered at the competition. “This is such a special place in general. I haven’t ridden here since 2013, since it’s so important to me to work this event, and I haven’t wanted to give up. This year, I really wanted to ride, so I approached my team and said I wanted to ride, but that I’d still take care of my job as well. I wanted to be able to come and do both, and I have an amazing team helping me. I couldn’t do it without them. Kelly Prather flew in to see my boys and help me, and as I said, Tamie is coaching me this weekend. This is such a family show – my mom and my husband are here, as are both of my boys. It’s really fun to have everyone here and be able to do it.”

Kristen Bond and Liz Bond’s 10-year-old Dutch Warmblood gelding, Enough Already sits 3.6 points behind Thieriot Stutes and Chatwin on a 30.5 to position themselves in second place heading into tomorrow’s cross-country phase. Bond hasn’t competed at The Event at Rebecca Farm in 12 or more years, and she is impressed to see how large it has gotten. “It’s insane. This has been so fun to come back and see how it’s grown. My horse was super today, and the cross-country course looks great. Obviously there’s some really big stuff out there, and it’s really long, so that’ll be a test as well. It looks like a typical Ian [Stark] track. Being here for multiple years, he’s taken the more tight turning, technical piece out of it and made it more of an open, galloping test which so far looks like his best track here, in my opinion.”

For all live scores at The Event at Rebecca Farm, go here. Find the live scoring for the NAYC here.

Live Streaming for The Event at Rebecca Farm may be watched here. 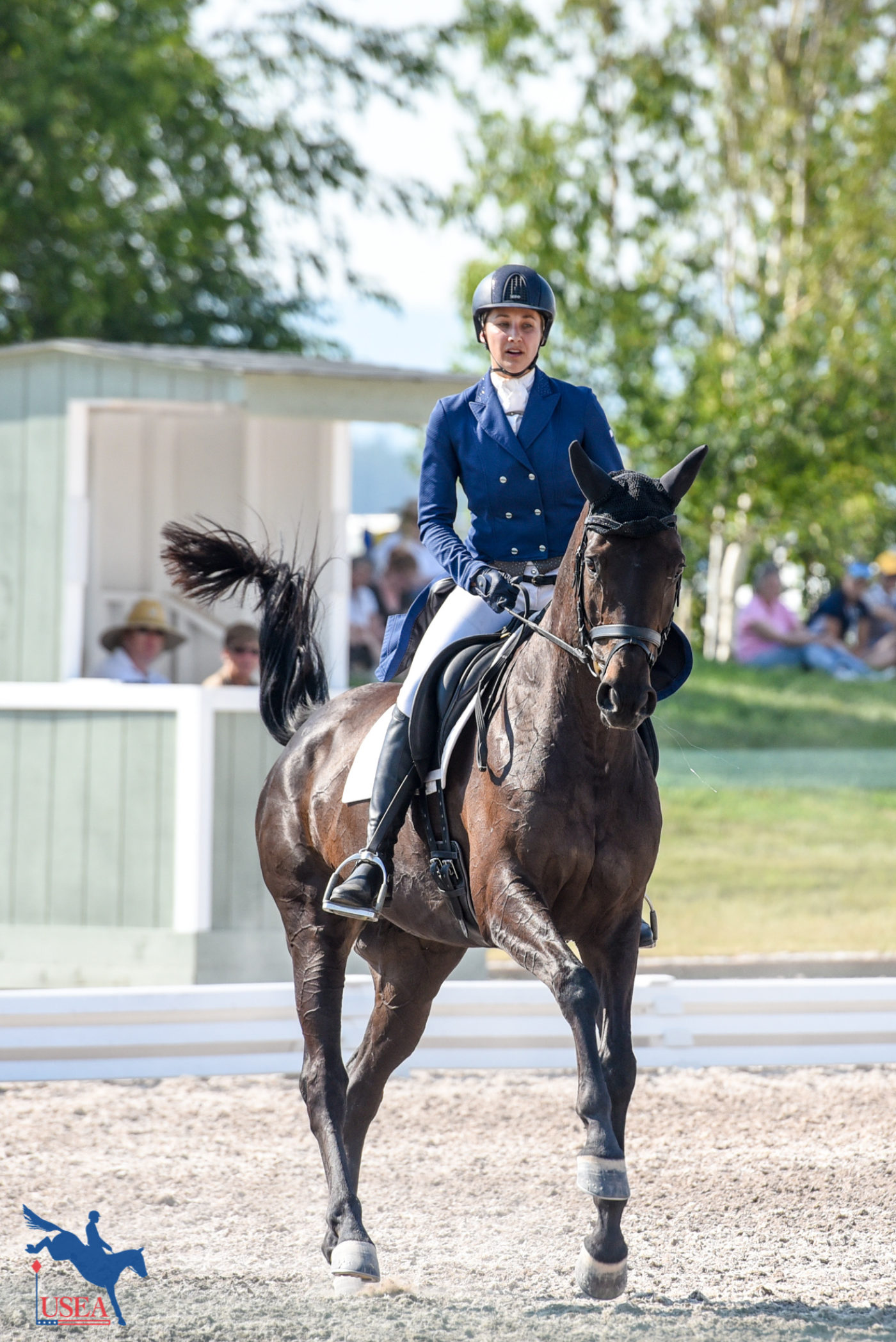 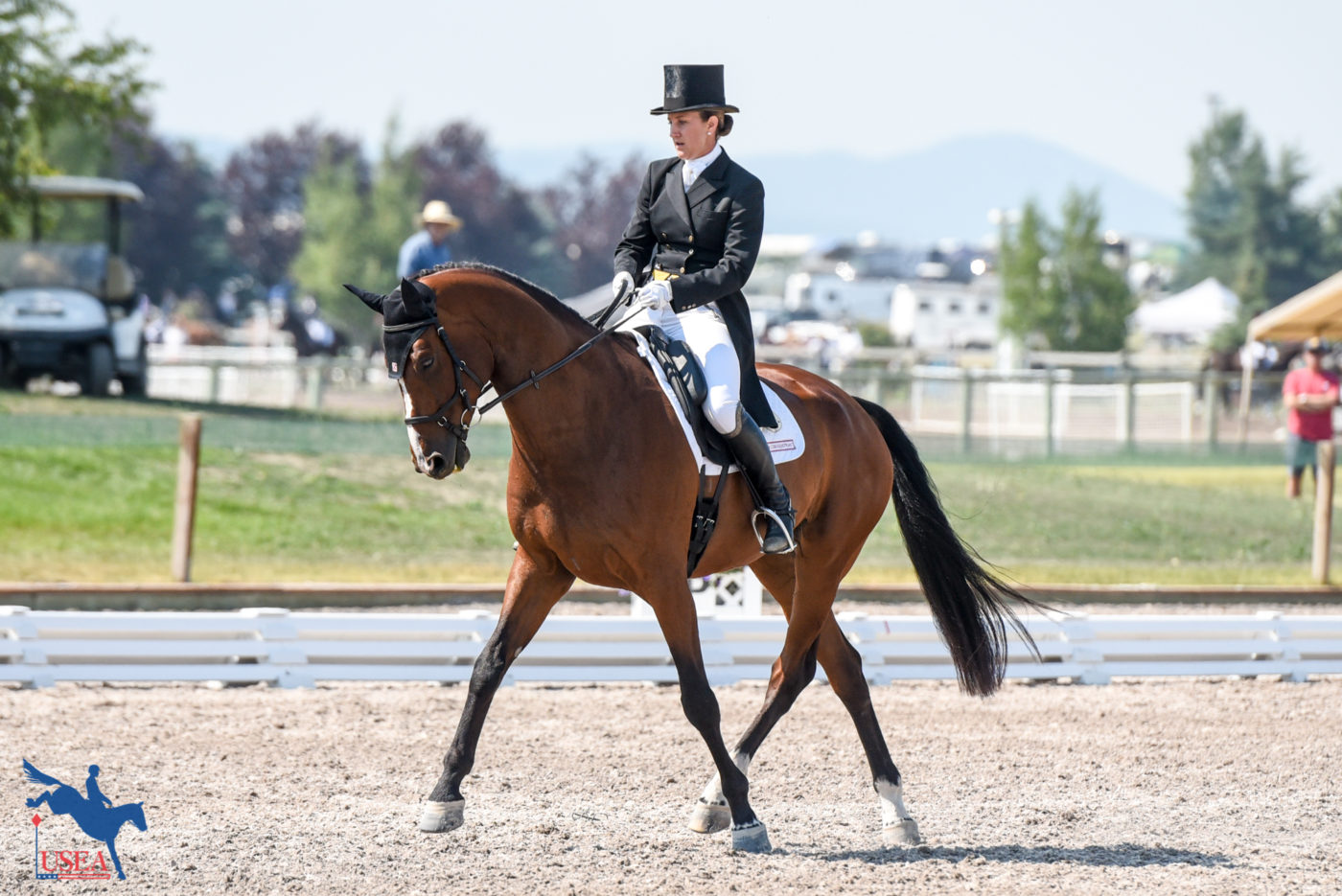 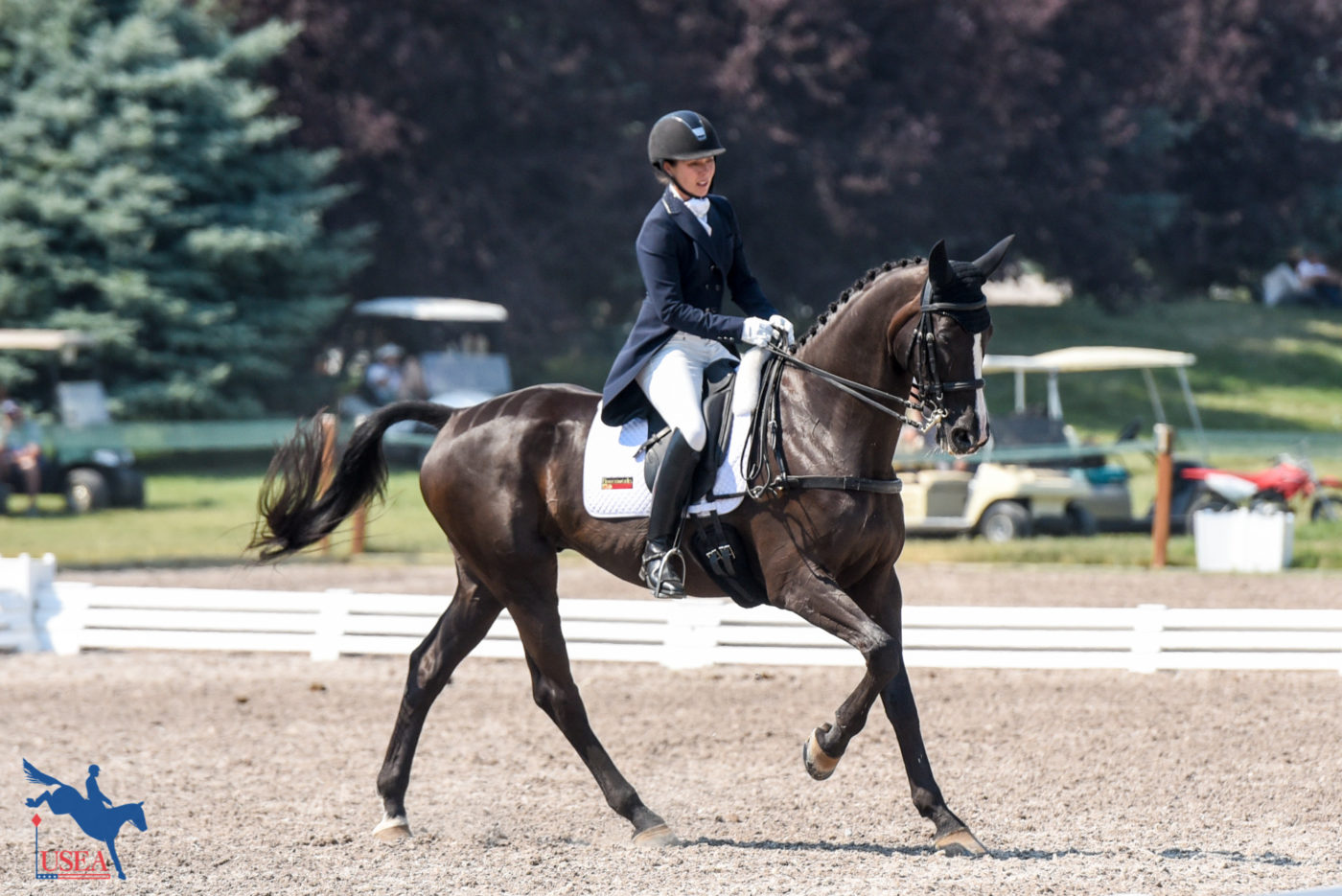 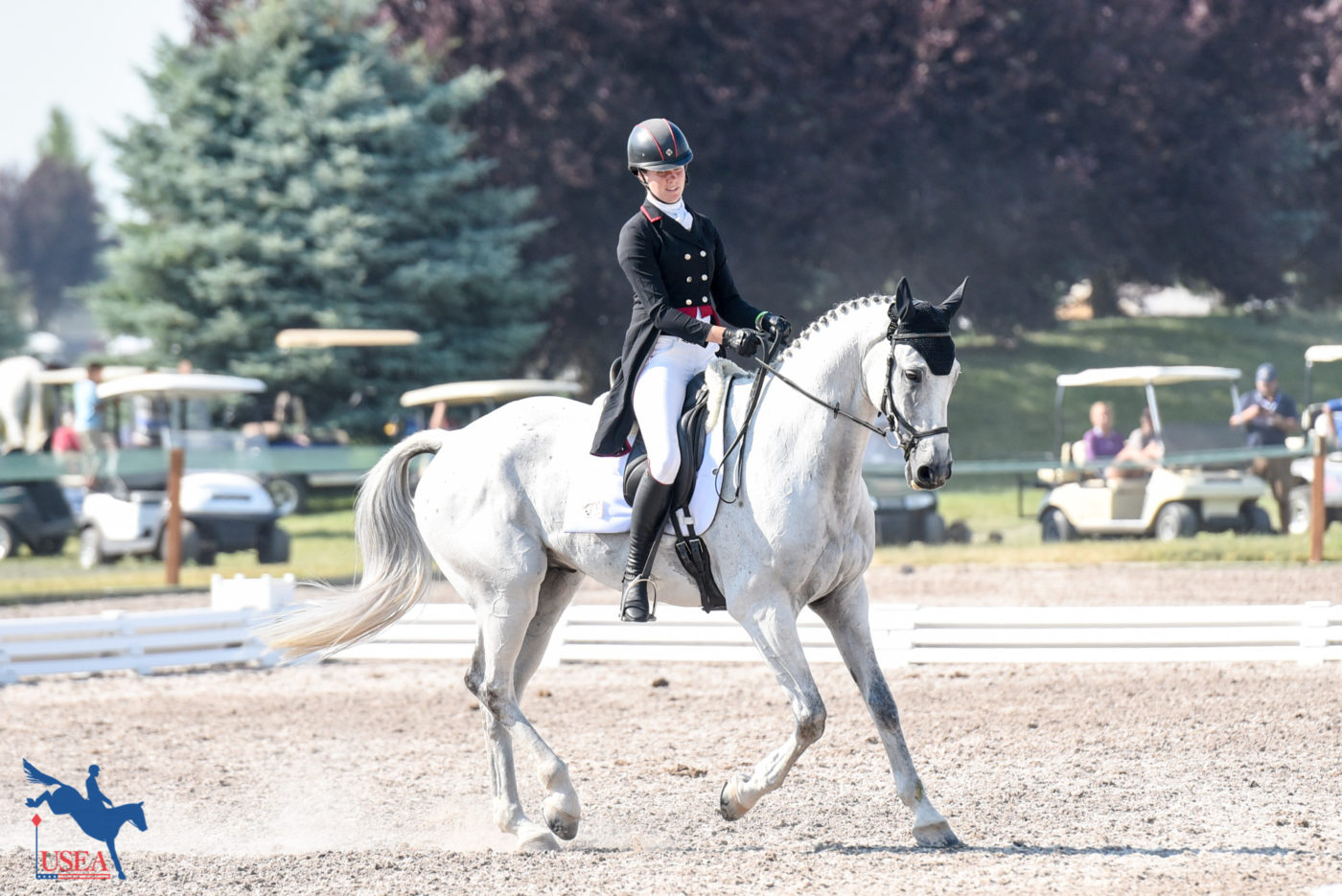 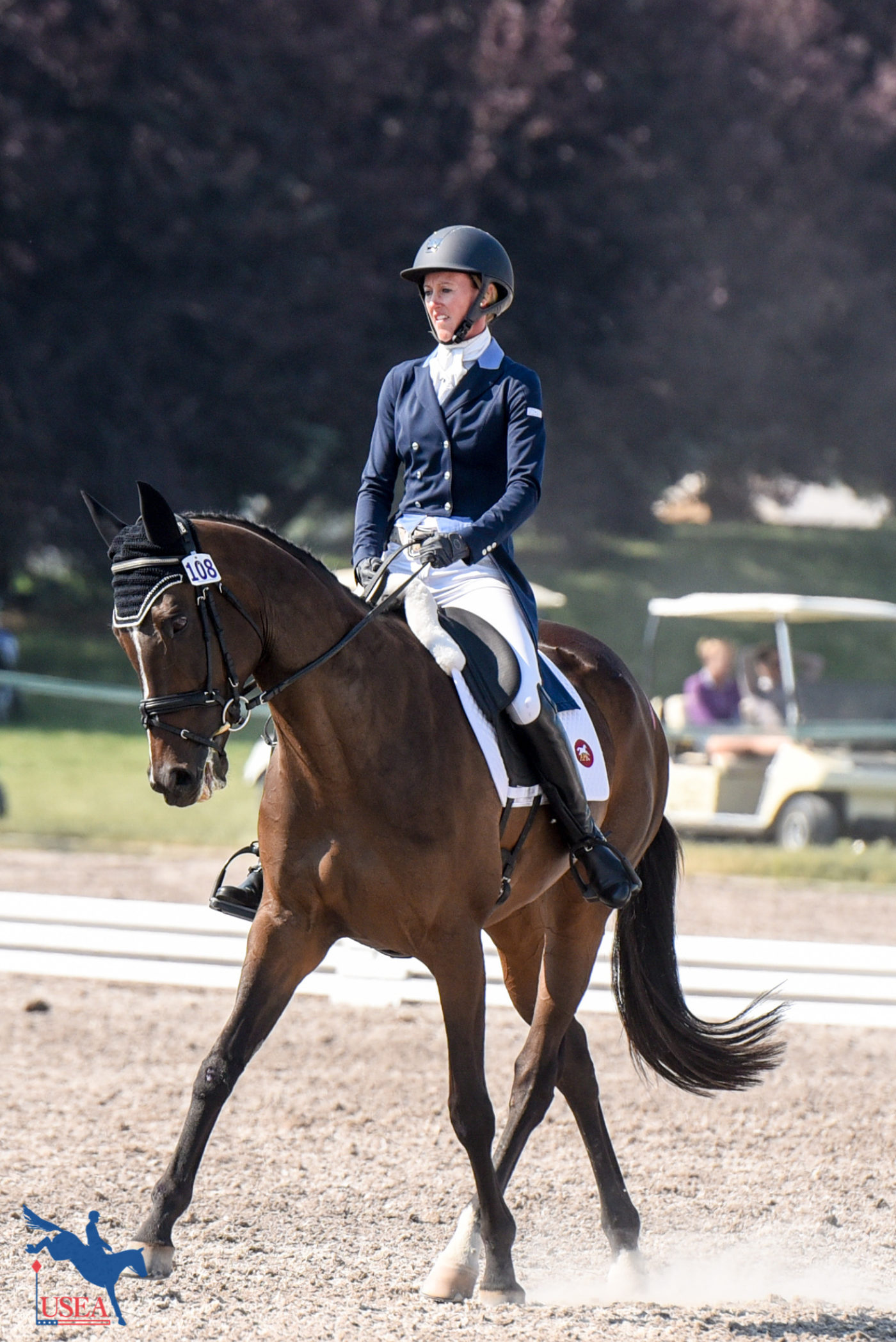 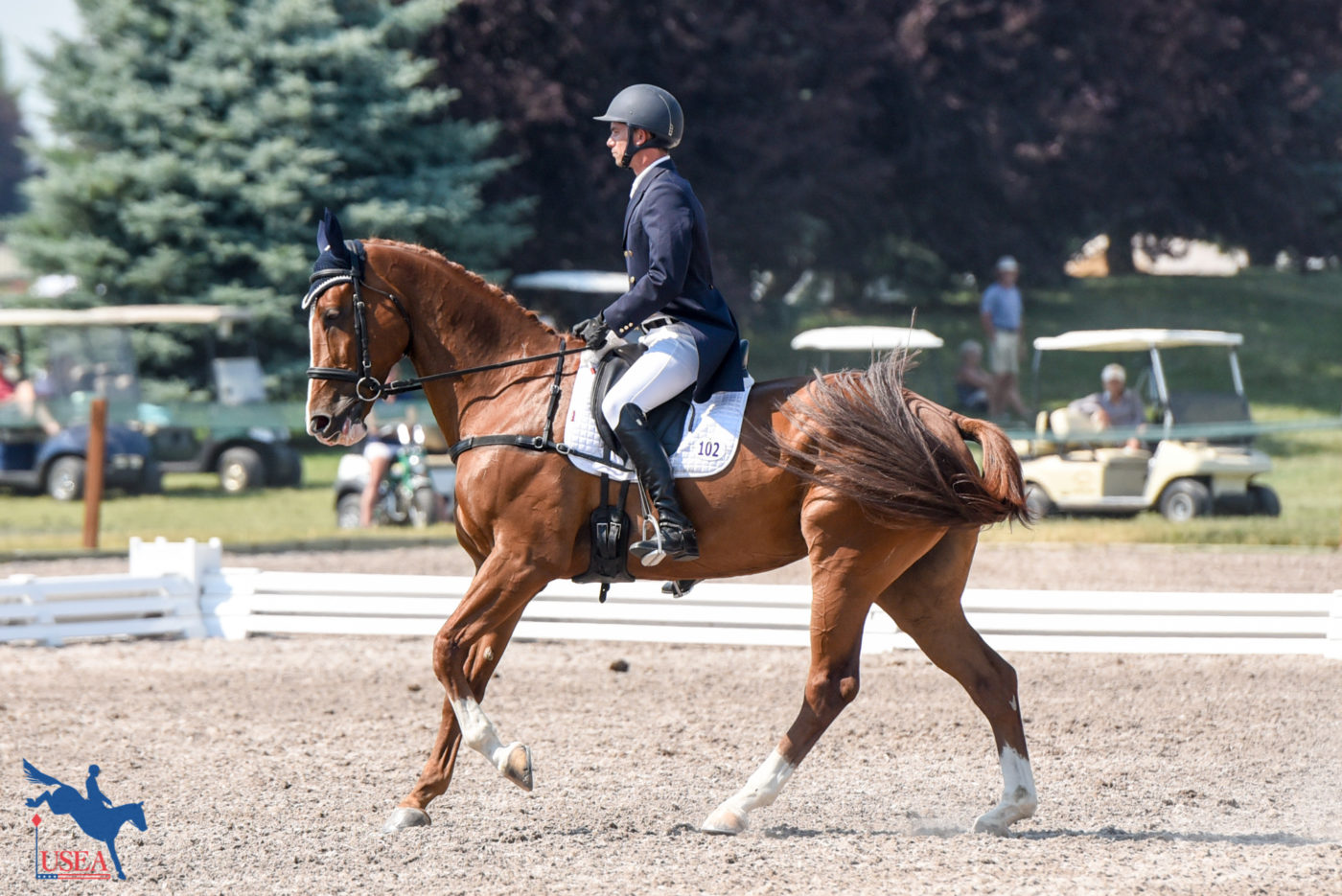 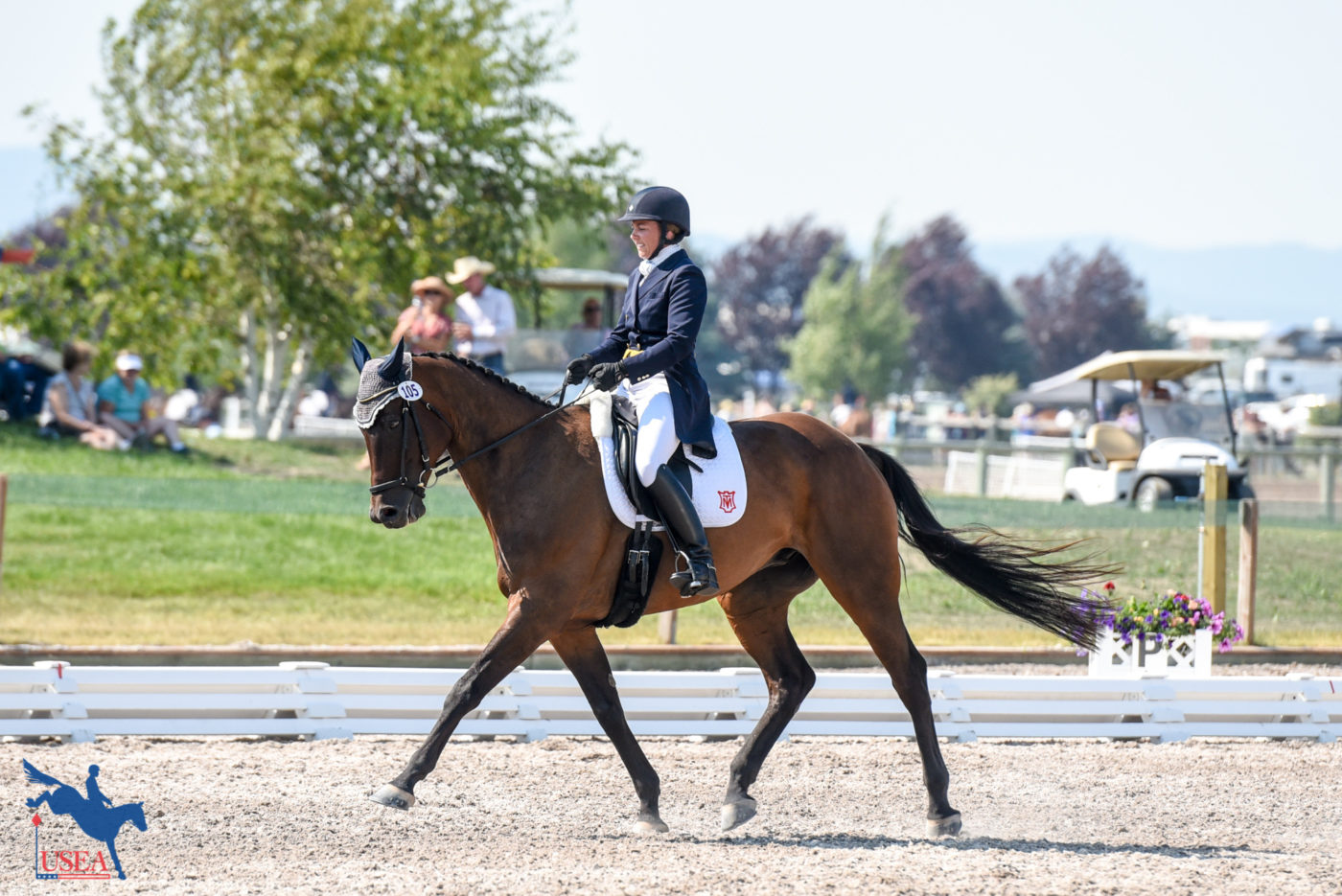 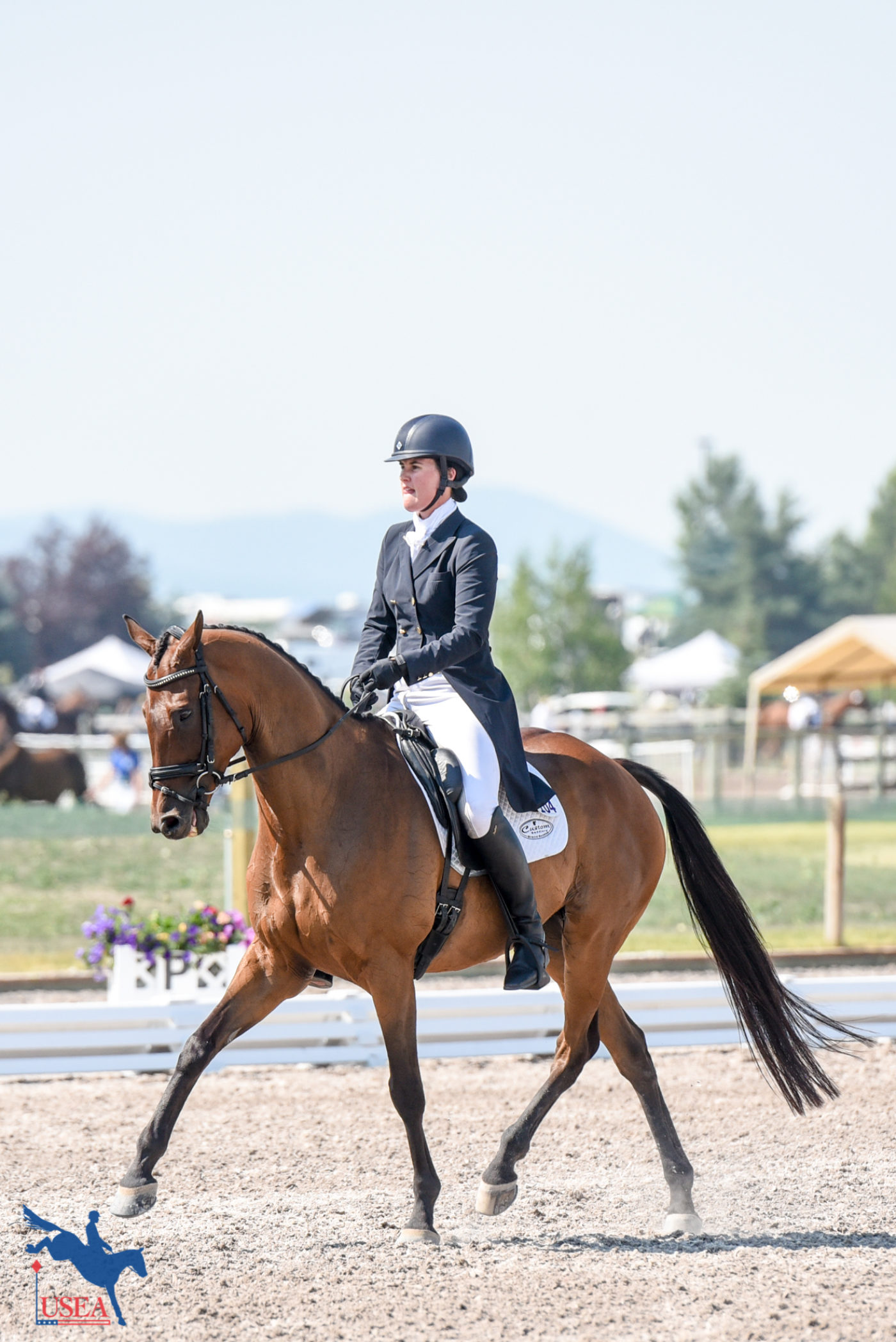 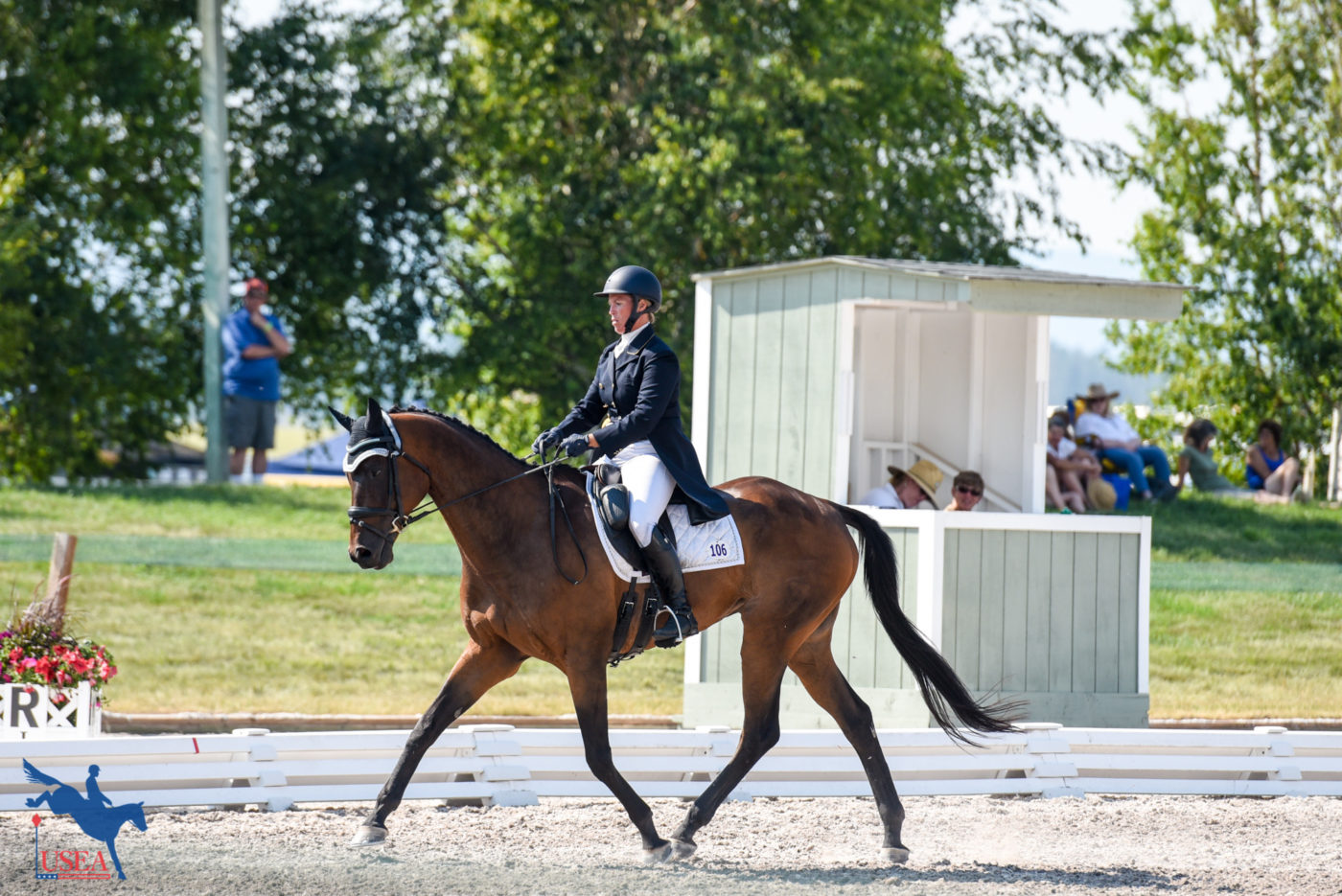 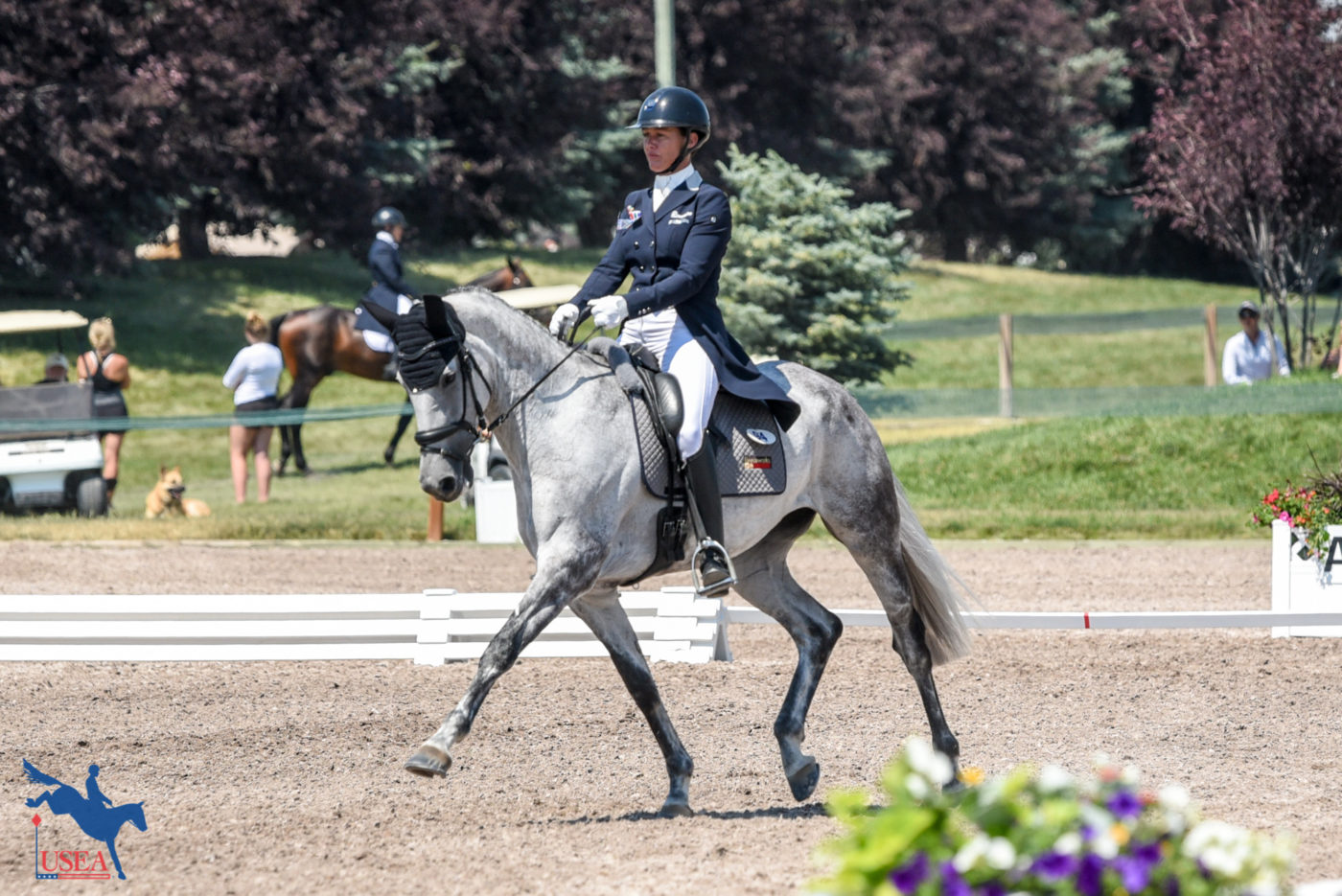