Three ladies sit at the top of the leaderboard after the first day of competition in the Adequan USEA Gold Cup CIC3* at the Red Hills International Horse Trials. Marilyn Little and RF Scandalous (Carry Gold x Richardia), Jacqueline Mars, Robin Parsky, and Phoebe and Michael Manders’ 13-year-old Oldenburg mare, laid down a commanding test shortly before the lunch break to take the lead on a score of 25.6.

“She gave me a great feeling,” Little said of her test this afternoon with “Kitty,” as RF Scandalous is known in the barn. “She’s been super happy since she arrived here. How could you not be happy here? It’s such a beautiful event.” Little said that the last time she had Kitty here was in 2015 leading up to the trials for the Pan American Games. “It feels great to come back here with her now a much more experienced, seasoned horse.”

“She was very good today on the flat; [it was] a bit of a conservative test,” continued Little. “She was very excited at Ocala, which was just an abnormal week for us really from A to Z. I was hoping to have a quiet, calm, conservative test where she left feeling very zen, so it probably lacked a little bit of the brilliance that she can have because she’s such a spectacular mover, but we traded on the discipline side of it and she gave me everything I was looking for. I’m really happy with her.”

Little appeared at the press conference with her left foot in a walking cast, remnant of the broken foot she sustained on fence 8B on the CIC3* at the Ocala Jockey Club Three-Day Event last fall. “It’s healing, but the choices were surgery or healing this way and it’s been slow. I’m trying to be very diligent about it, so I get off the horse and I’m right into [the walking cast,]” she explained. Little plans to have surgery to repair the damage to her metatarsals this fall.

“I’m aiming her towards [Kentucky],” said Little of her plans with Kitty for the spring season. “She’s been competing endlessly in Wellington in the 1.35 meter [classes] and doing dressage, so she’s really been taking advantage of everything that I can get her into there. We’ve done one prep run at Ocala which was nice and slow, and the plan for the balance of this spring will be made after this weekend. We’ll just see how she does.”

Jordan Linstedt and her own and Barbara Linstedt’s 15-year-old Hanoverian gelding Revitavet Capato (Contendro I x Annabelle) scored a 29.5 this afternoon to secure second place leading into the second and final day of competition in the CIC3* tomorrow. “He was very good,” she said. “The only run I’ve had [this year] was at Rocking Horse and he put in a really nice test there. Obviously it’s a lot of atmosphere, there’s a lot going on so he got a little bit up and spooky for me, which he hasn’t done quite as much. Last year I thought I’d kind of gotten over that with him because he used to be very, very spooky and get kind of tense and goofy in the ring. I think I trust him so much more now, I didn’t panic when he [did] that. I used to kind of take a hold of him and [today] I tried to just be soft and keep riding forward and he put in a really nice test. Once he got in the ring that kind of subsided quickly and then he was very much everything I asked for. I don’t feel like I went all out, but I wasn’t conservative either.”

Linstedt, a Washington State native, has been in Ocala since mid-February. Last year she made two trips to the east coast, one in the spring to compete at the Rolex Kentucky Three-Day Event where she ended up rerouting to the Bromont CCI3* and another in the fall to compete at the American Eventing Championships, Plantation Field International, and Fair Hill International before heading back to Washington for the winter. Her plan this spring is to head next to Carolina International and The Fork before making a decision about whether or not their next stop will be Kentucky or Badminton.

Jessica Phoenix and Pavarotti (Pavarotti Van de Helle x Fidelia), Don Good’s 16-year-old Westfalian gelding, led off the final group of the CIC3* competitors today by scoring a 29.8, which was good enough for third place overnight. “It’s always so much fun competing that horse at this level,” she said. “He went in and he was so relaxed and I was just so excited to get in the ring today on him. His changes were beautiful; they were the best they’ve ever been in the ring. And his trot work was awesome as per usual. We’re really looking forward to tomorrow getting out on course.”

Dutton and Roberts Tie for the Top Spot in the Advanced

Phillip Dutton rode Sue Foley, Ann Jones, and Tom Tierney’s Fernhill Singapore (Singapore x Riedellia) to the lead in the 9-year-old KWPN gelding’s debut at the Advanced level, scoring a 29.8 to tie for first with Waylon Roberts and Kelecyn Cognac (Fusaichi Pegasus x Dreamland) heading into the cross-country phase of the Adequan USEA Gold Cup Advanced division tomorrow afternoon. Dutton has had the ride on Fernhill Singapore since the gelding was 5 years old and has never incurred a single cross-country jumping penalty.

Roberts and Anthony Connolly and L. Skey Levely’s 15-year-old Thoroughbred gelding scored a personal best at the level today. “I was really pleased,” said Roberts. “We kept him really quiet in the warmup and that seemed to help a lot. He was a bit unrideable the last test I did with him, so I tried to just ease him into the test and I was really happy with how he went. He was listening to me the whole time.” Waylon and “Dan” are entered in the CIC3* at Carolina International later this month with their eyes on Kentucky later this spring.

Twenty-three-year-old Lindsay Beer and her longtime partner El Paso secured third place in the Advanced division this afternoon with a score of 32.9. The 16-year-old Roan/Trakehner gelding owned by Penny Beer has been partnered with Lindsay for eight years now, five of those have been spent at the Advanced/three-star level.

“He was really good today,” Lindsay said of her test with El Paso. “He was very obedient, normally we struggle with him getting a little bit lazy in the ring, but he kept his energy level up which was great without getting too feisty.” As it’s their first run at the level this spring, Lindsay’s plan for tomorrow is to go at a steady pace and see how things go.

The riders agreed that they’re looking forward to running Mike Etherington-Smith's cross-country course tomorrow. “Whenever you’re walking around a course and you just feel like you can’t wait to get out there and jump it, it’s really exciting,” commented Little. “I think everything is very well presented. It’s got a great flow to it, which for many years was always a concern here, but they’ve done such a beautiful job maximizing everything that the property has to offer.”

“It looks like [Mike Etherington-Smith] has used the land really well,” noted Roberts. “It’s a really big track and it’s going to require a lot of bold riding but I’m looking forward to it with Dan. I think it’s going to suit him really well.”

“I think it’s big and bold,” commented Linstedt. “There’s a quite a bit of terrain in the beginning, with a big pull up the hill and then we come up to some bounce upbanks to a log. Then it starts to even out a little bit and we get a galloping chance in the middle of the course out and back on a loop, but everywhere there’s a lot of questions and a lot to see . . . I’m excited to get out there and ride it.”

Riders in the CIC3* will show jump tomorrow morning at 9:00 a.m. before continuing on to cross-country beginning at 10:50 a.m. The Advanced division will run cross-country immediately after the CIC3*, starting at 12:31 p.m. 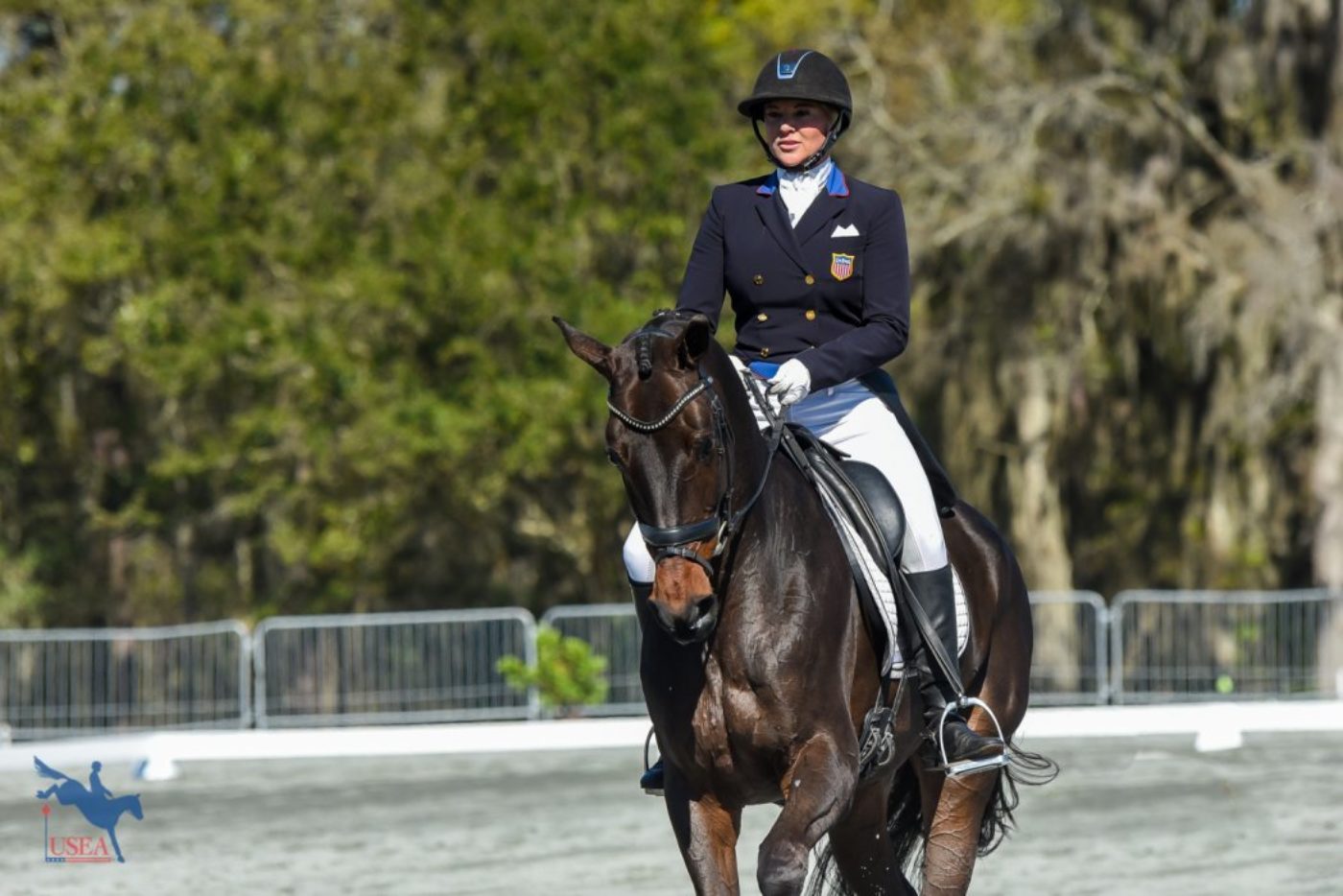 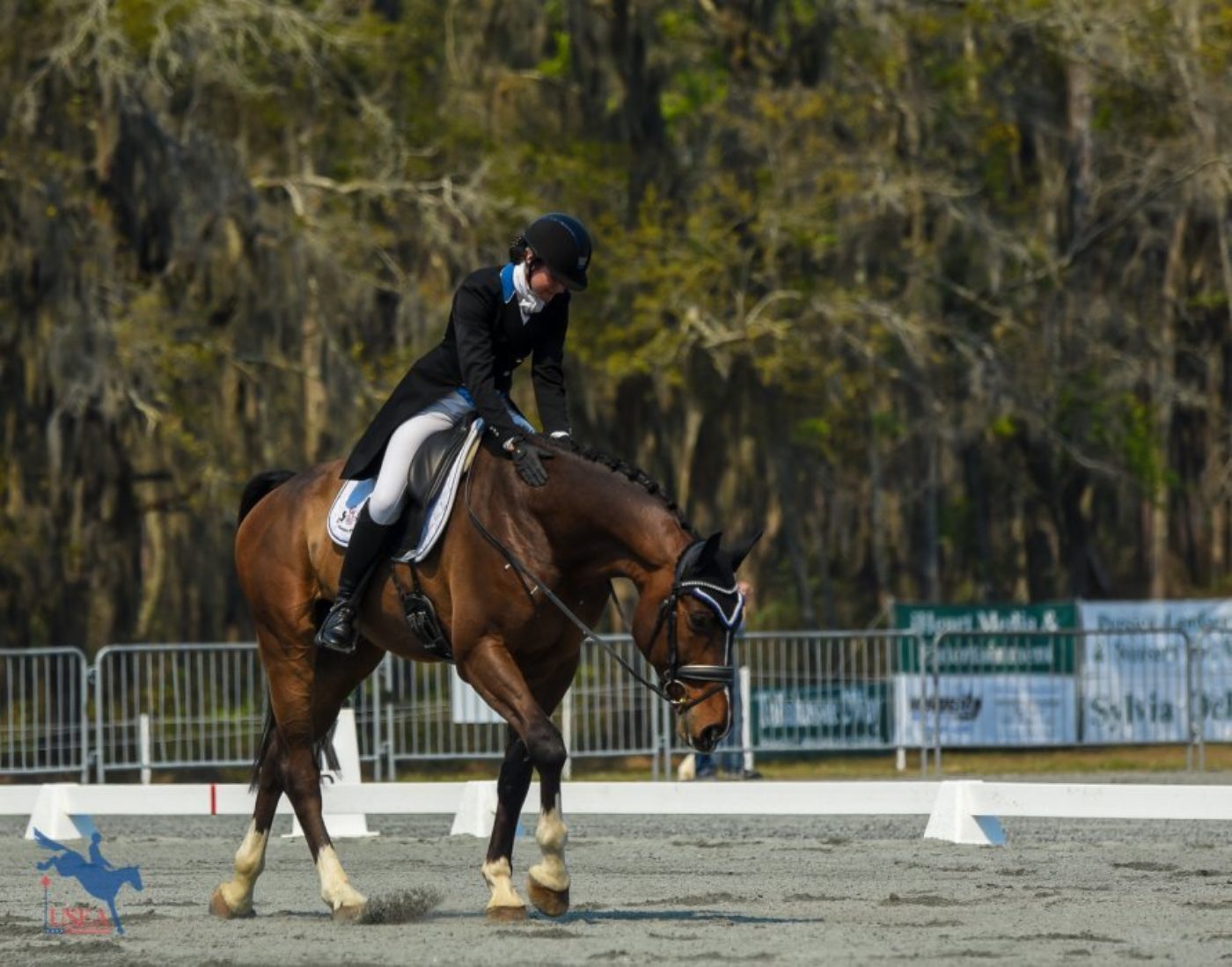 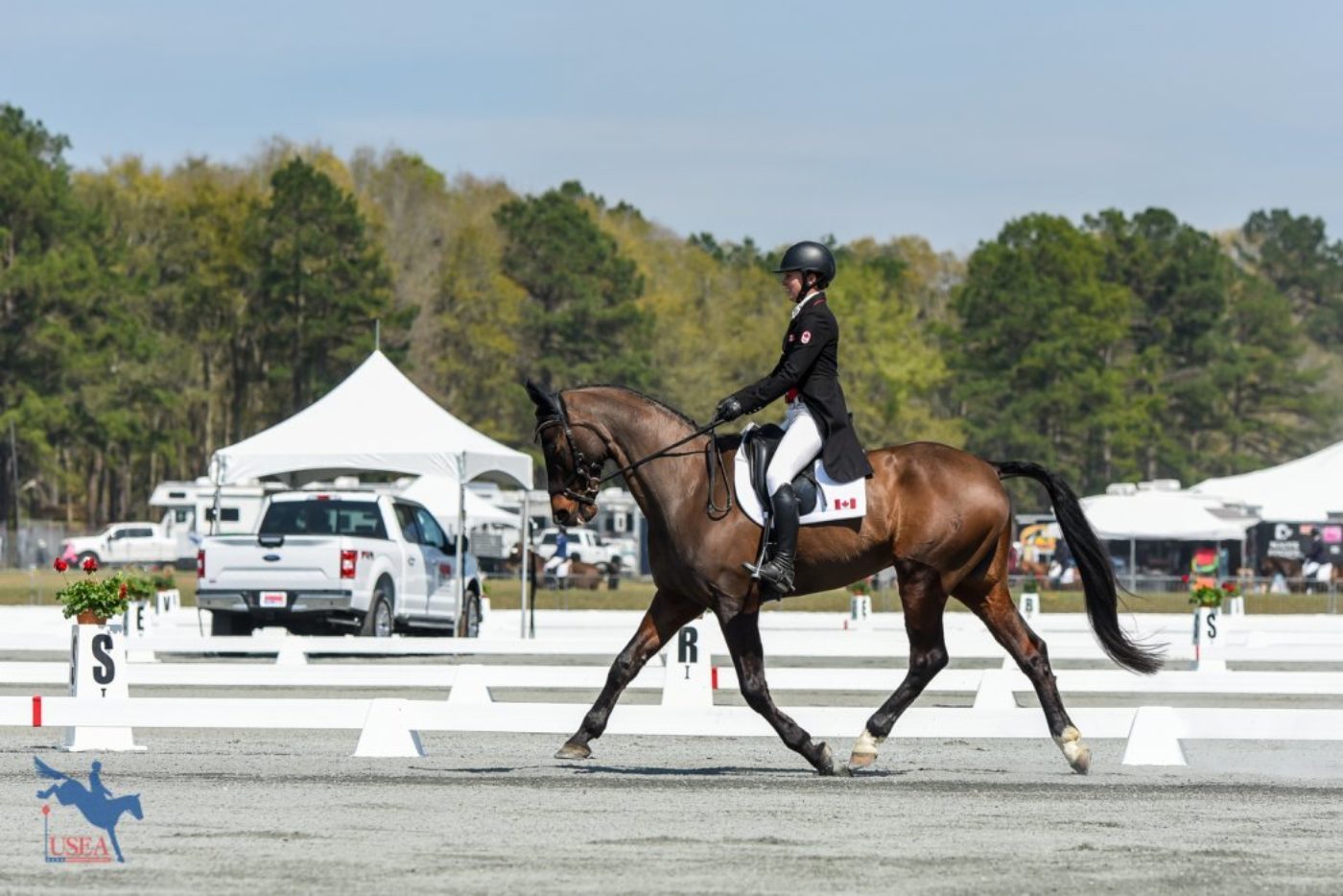 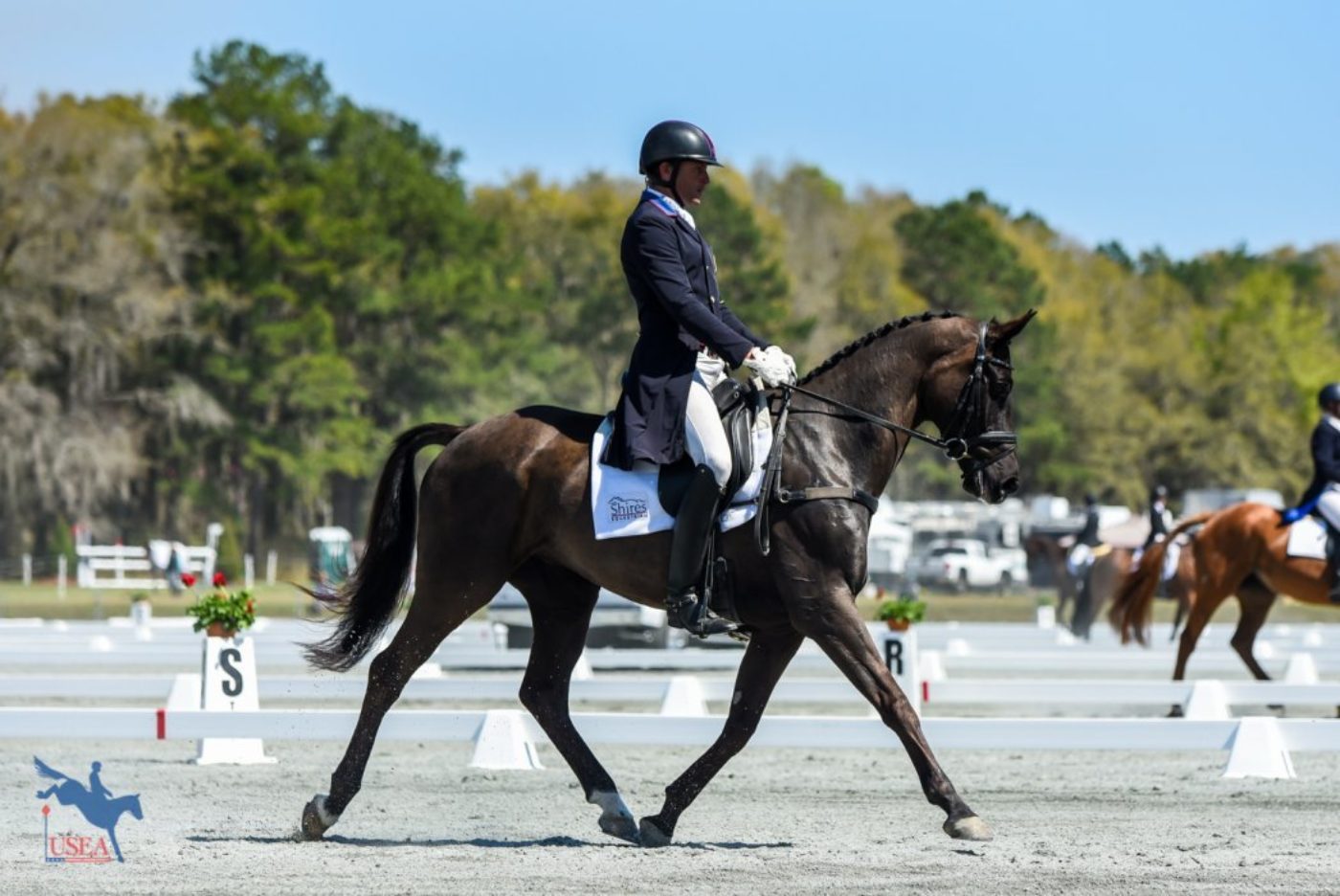 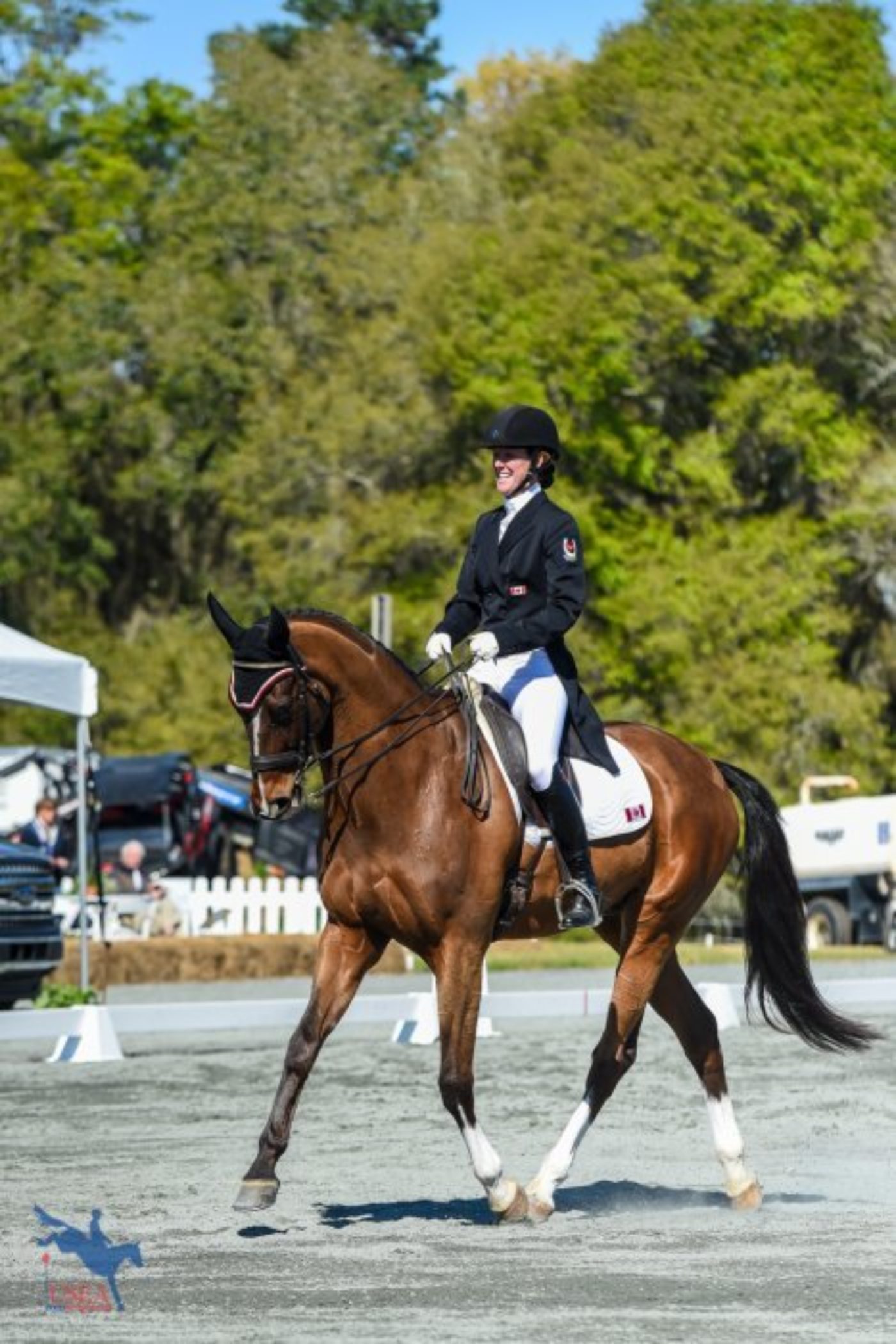 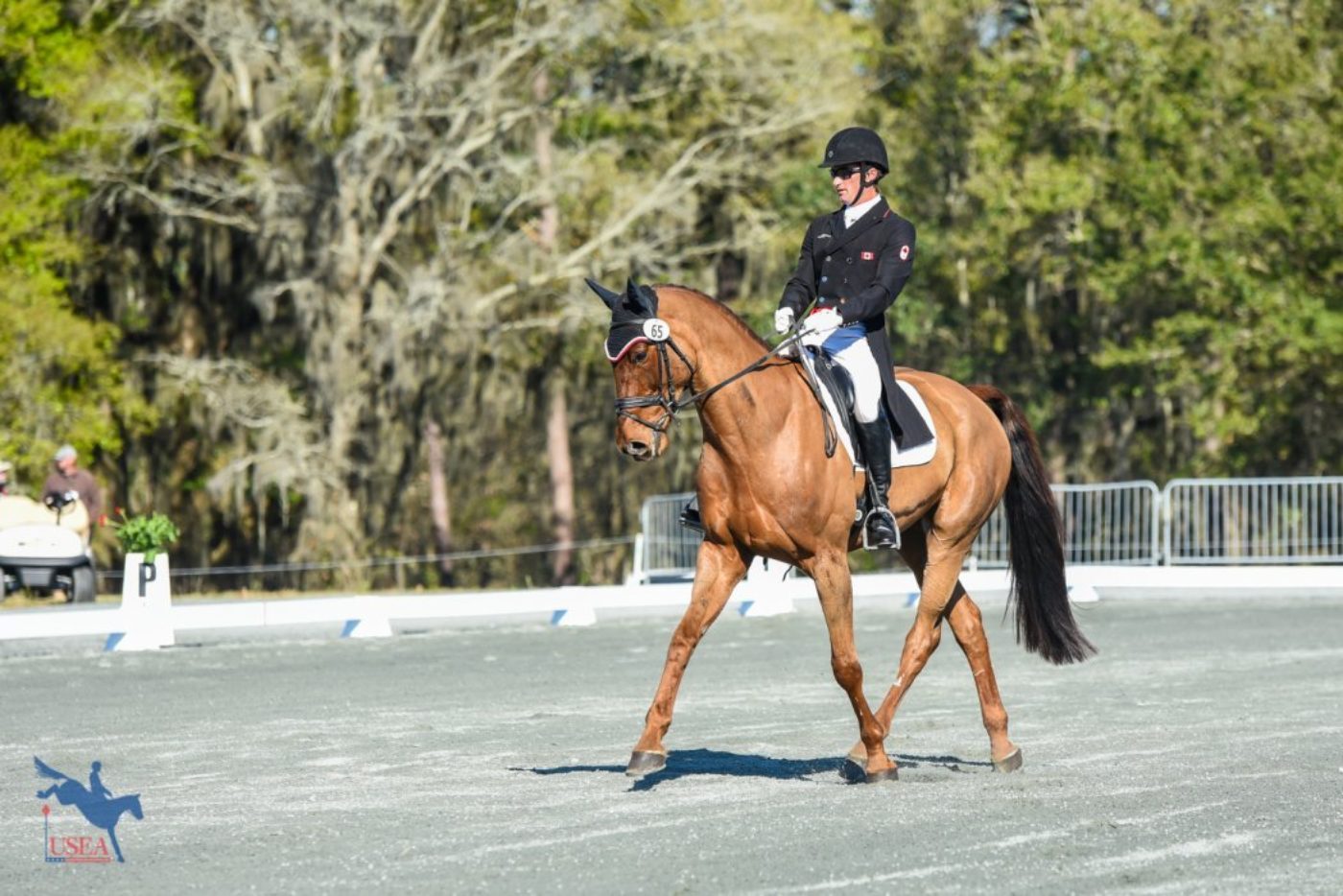 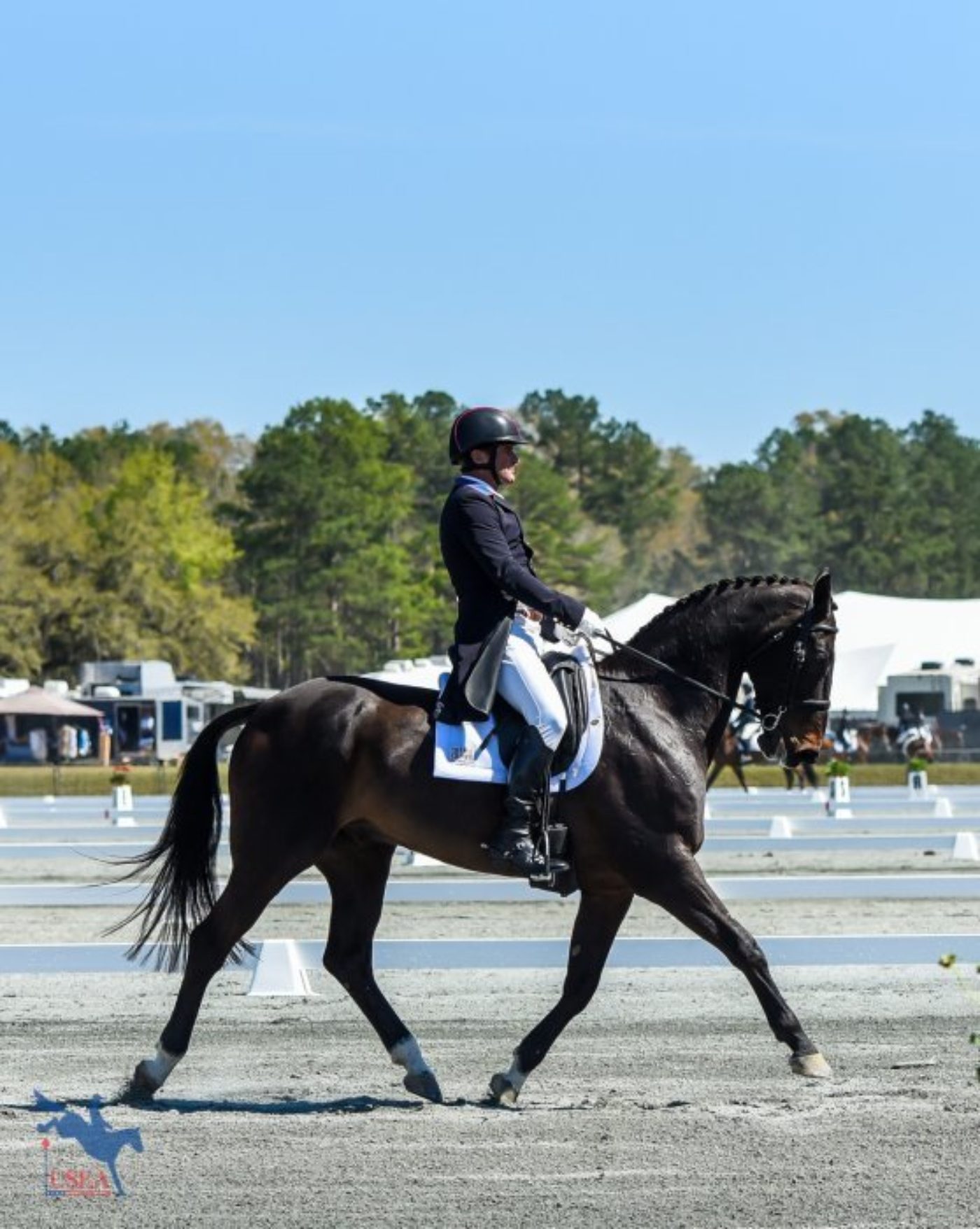 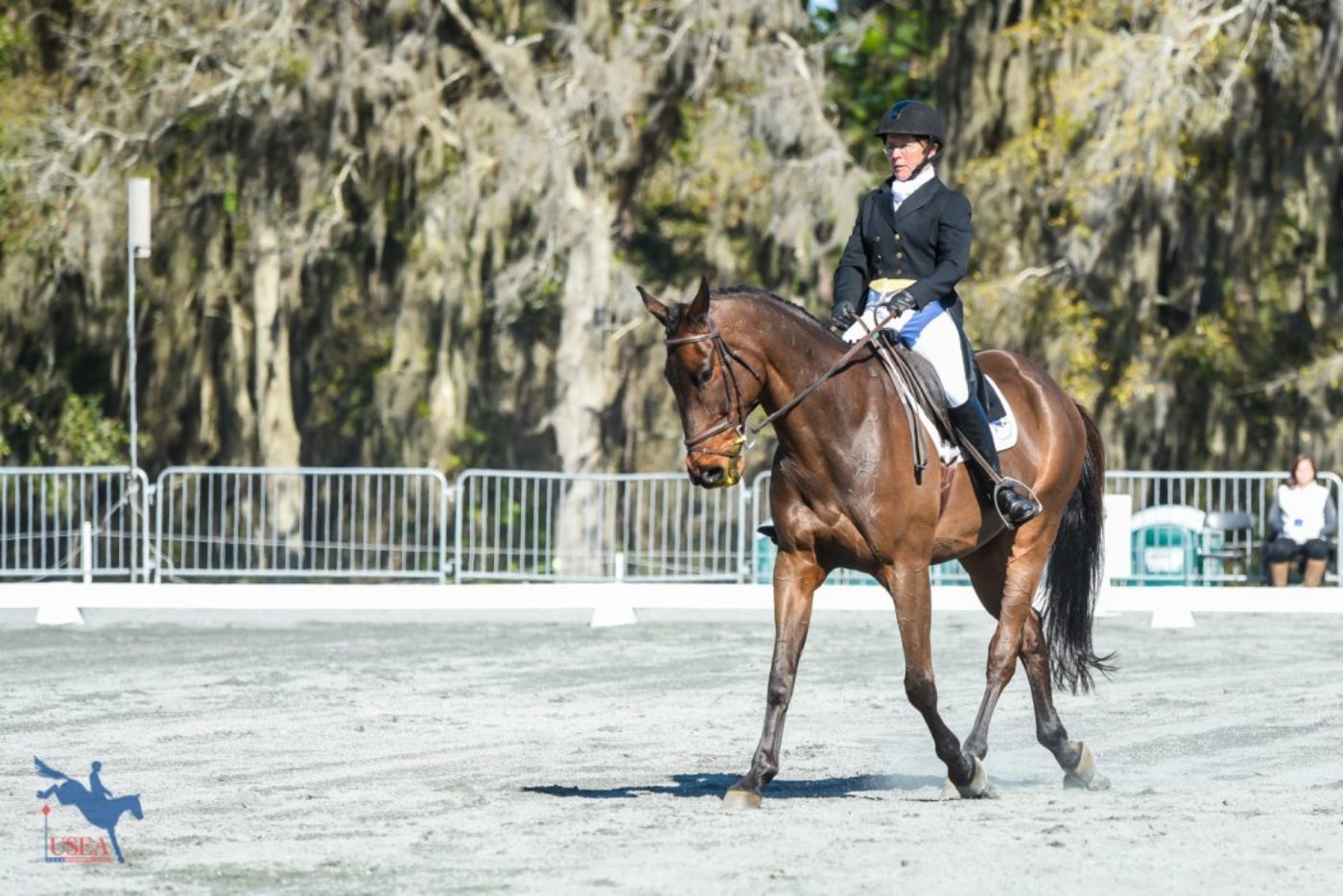 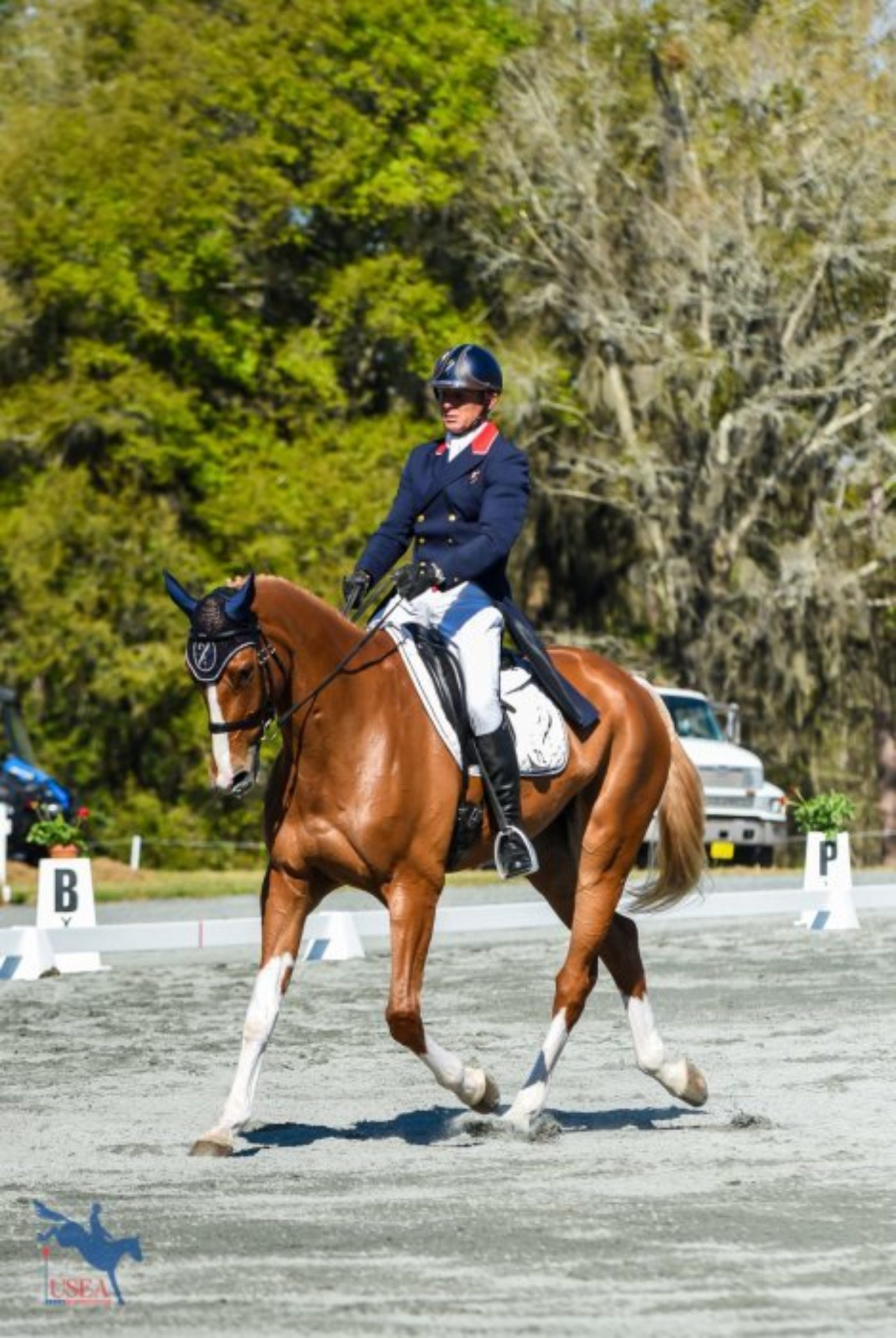 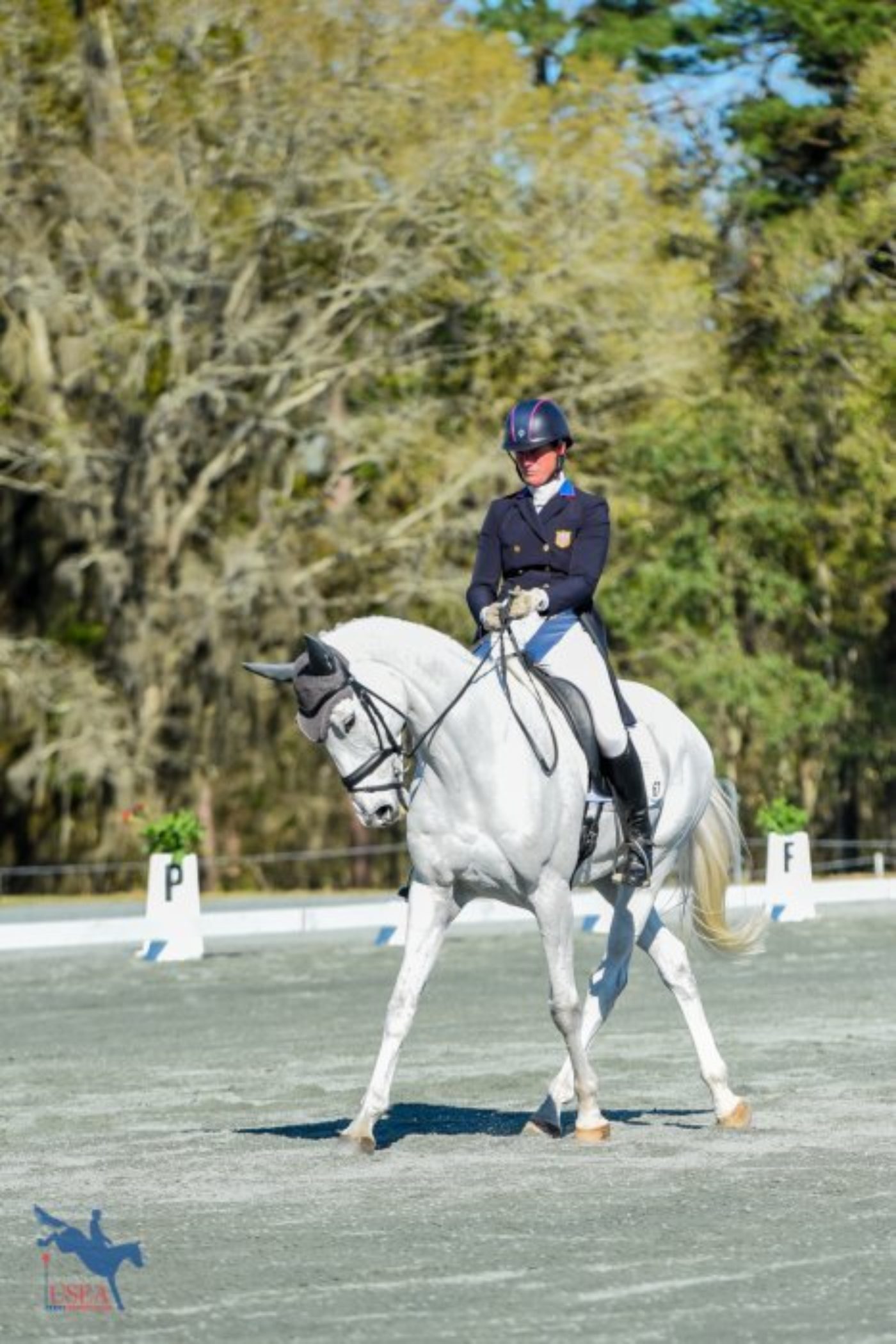