Many had predicted that this year’s Mitsubishi Motors Badminton Horse Trials would not be a dressage competition, and so it proved, with New Zealand’s Jonelle Price and Classic Moet soaring from 22nd place after the first phase into the lead with a thrilling exhibition of fast cross-country riding.

Price has been described as the fastest female event rider on the planet and it seems that the arrival of her baby son, Otis, last summer has done nothing to put the brakes on. She finished just one second over the optimum despite a heart-stopping moment in the Lake (fence 9abc) when the mare got too close to the brush in the water and twisted in the air. However, Price soon recovered her aplomb.

“I was a bit rusty and too strong – it was my fault – so we had to abort,” explained Price. “I had been up on the clock until then and we were then 12-15 seconds down, so as soon as we were through the Shogun Hollow, I thought ‘Let’s go’.

“She’s some mare, so un-special that she’s special, and she makes me look good. When I first got her, as a 10-year-old, I didn’t think she had enough scope, but she’s your best friend."

The stage is set for a thrilling climax in tomorrow’s show jumping phase. Dressage leaders Oliver Townend and Ballaghmor Class, the penultimate combination out on course this afternoon, finished on an equal score to Price – 28 – but were further away from the 11min45sec optimum.

Townend will be double-handed in his bid to become the third rider to secure the Rolex Grand Slam as his second ride, Cooley SRS, currently lies in fifth.

“Two horses in the top five is pretty good,” said Townend, the master of understatement. “Five years ago, I kept saying to people that I had some really exciting young horses coming through. Three years later people kept on asking, ‘Are they still coming through’? I’ve had both these horses from 4-year-olds and it’s taken a long time to get them here, but I’m glad they have turned out as talented as I thought they would,” he said.

Rosalind Canter and Allstar B led for a long time, but dropped to third by the end of the day on a score of 30.3.

Canter's round was a brilliant exhibition of bold, attacking riding coupled with precision and great care. Her 6.4 time penalties were just about as fast as anyone managed in the morning.

“This was probably the first time he’s had to really dig deep,” said the 32-year-old. “Last year [when they finished fifth] I had a dream ride and everything happened really easily. Today he was more tired than he had been before, but he still dug deep. He was unreal over the technical fences. When I jumped the Vicarage Vee I was thinking, ‘this ought to feel big’, but he just stepped over it.”

The ever-brilliant Michael Jung and La Biosthetique Sam FBW are within striking distance of the leaders in fourth place on a score of 30.7.

They survived a heart-in-mouth moment at the Outlander PHEV Mound (fence 14) when a misjudgement at the first corner left Jung having to cling on like a limpet.

“The gallop down hill changed the balance and perhaps I trusted him a bit too much,” was Jung's assessment. “I was nearly out; it was very close. You could have had a mistake anywhere out there, but that’s what cross-country riding is about; you need care from the first to the last [fence].”

Mark Todd, the oldest rider in the field at 62, has two horses in the top 10. Kiltubrid Rhapsody lies sixth and Leonidas II, 10th.

Lauren Kieffer was the only U.S. rider to cross the finish line and currently lies seventh with Team Rebecca LLC's mare, Veronica. "She was great," said Kieffer after her round. "I had a bit of a chip on my shoulder after going slow last year, so I wanted to go out there and have another crack at it one way or another. She is an amazing cross-country horse and if you point her at the fences she is going to jump them. We had a great round. I was able to ride all of plan A which rarely happens. I am probably due for a bunch of bad runs as I was able to ride plan A at Kentucky last week."

William Coleman and Obos O'Reilly had a runout at 9c (the Lake) and opted to retire while Madeline Backus fell from P.S. Arianna at the same fence. Backus got up and walked away.

Eleven of the 16 first-timers completed, including ninth-placed Padraig McCarthy and Mr Chunky and Alicia Hawker and Charles RR (54th).

There were all sorts of lines ridden through the Lake, but Harry Dzenis (Xam) and James O’Haire (China Doll) were the only ones to endure a complete submersion on the landing side of the huge log drop in.

Course-designer, Eric Winter, said: “I was happy with how today panned out. I didn’t expect riders to go to the left of the ropes coming out of the lake and angle the straight route c element – they beat me there – but otherwise the fences generally rode as I hoped they would.”

“What a remarkable day of competition, I am always in awe of the partnership between horse and rider in this phase,” said Lance Bradley, Vice Chairman at Mitsubishi Motors in the UK. “The cross country is always exciting, and we have seen some wonderful combinations tackling the course. It will be fascinating to see who takes home the trophy on the final day of competition tomorrow.  Congratulations to everyone today.” 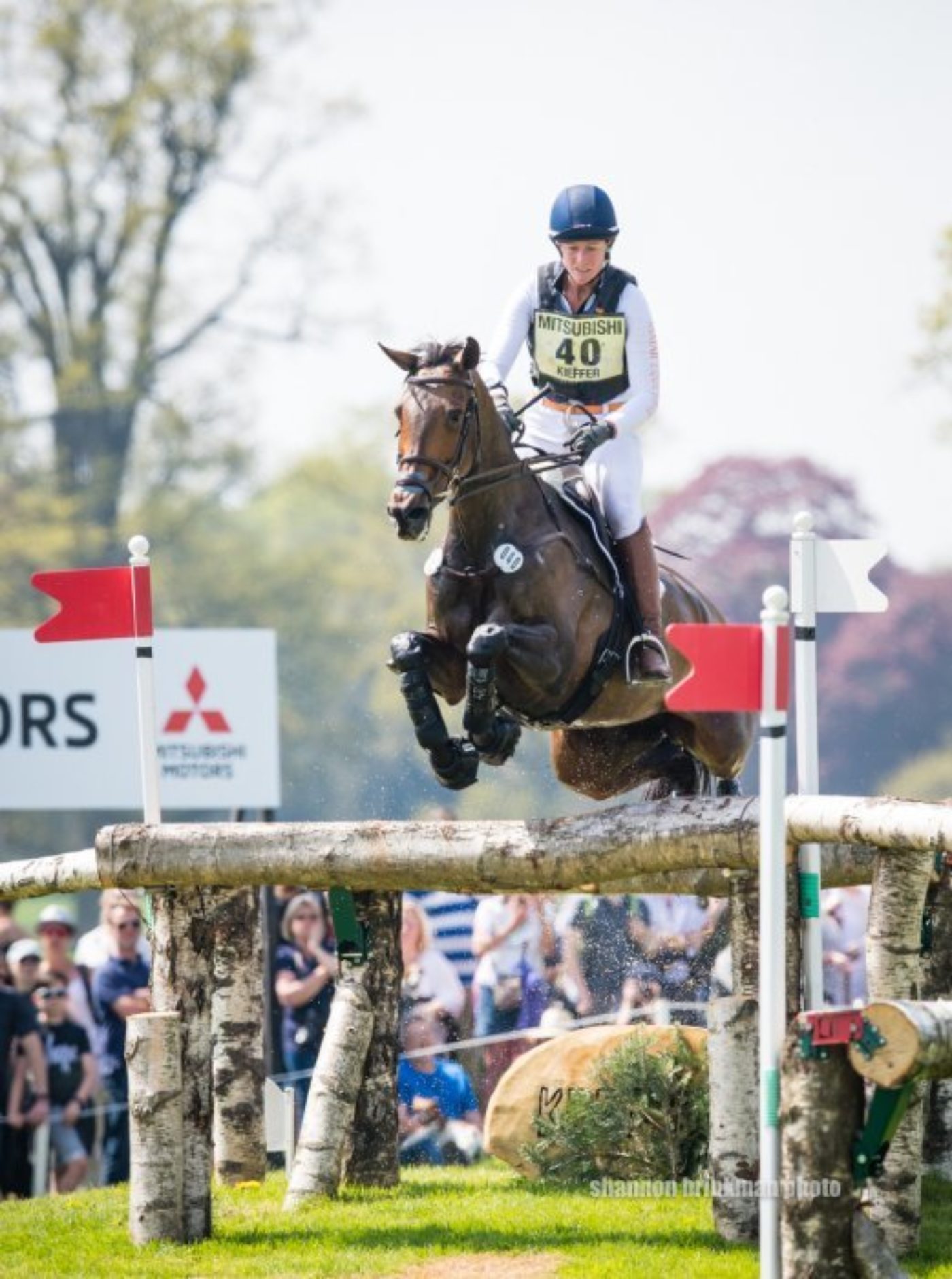 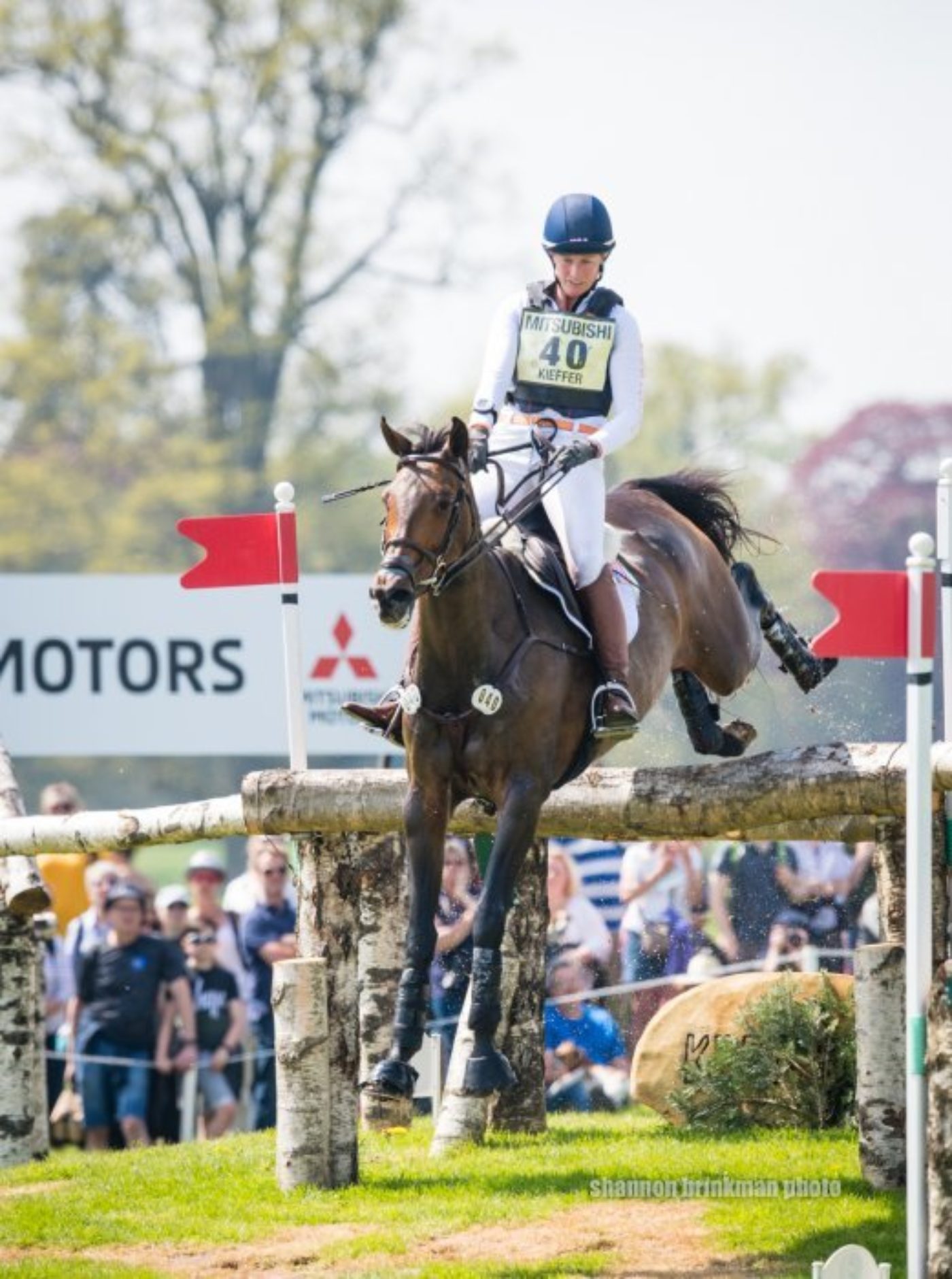 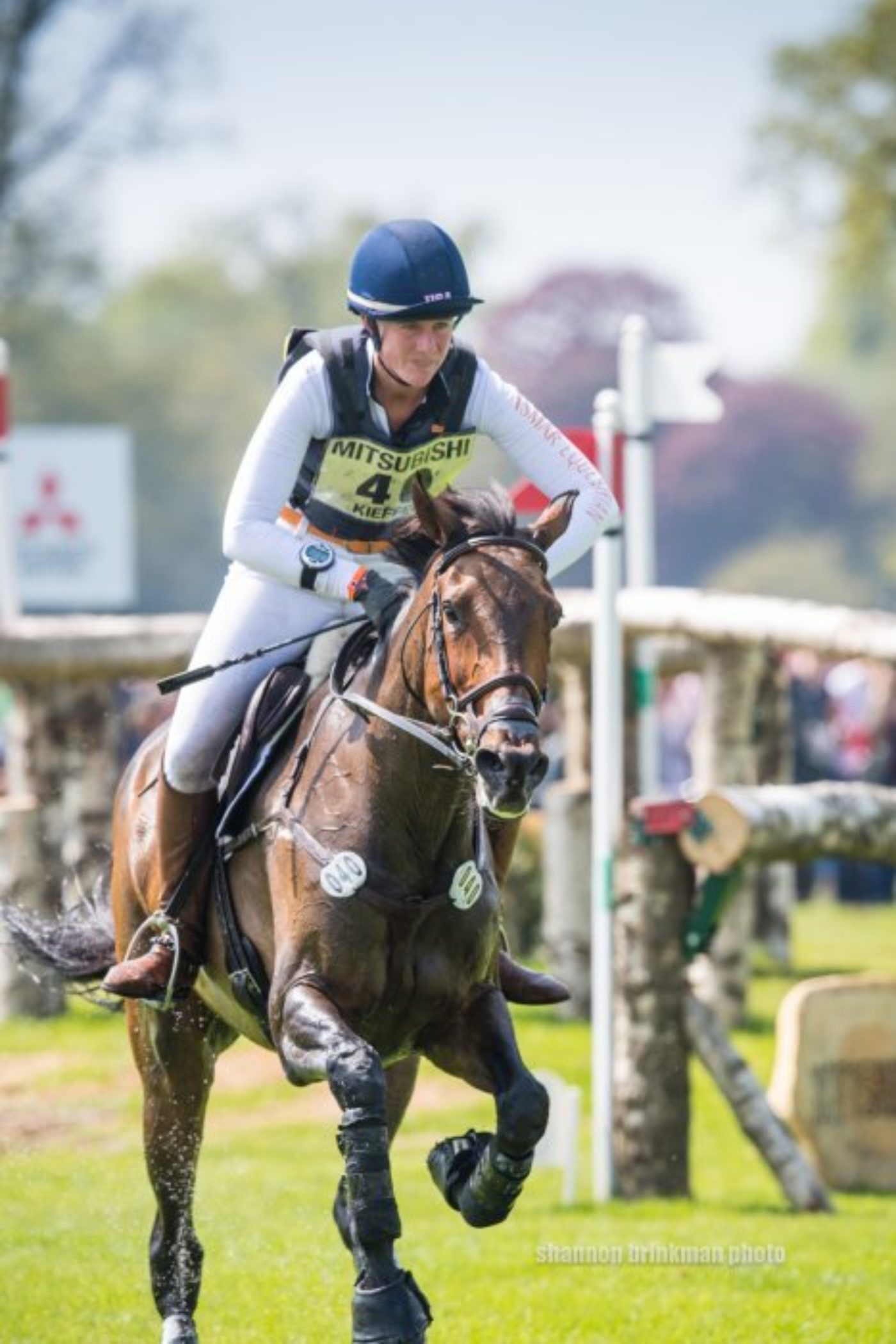 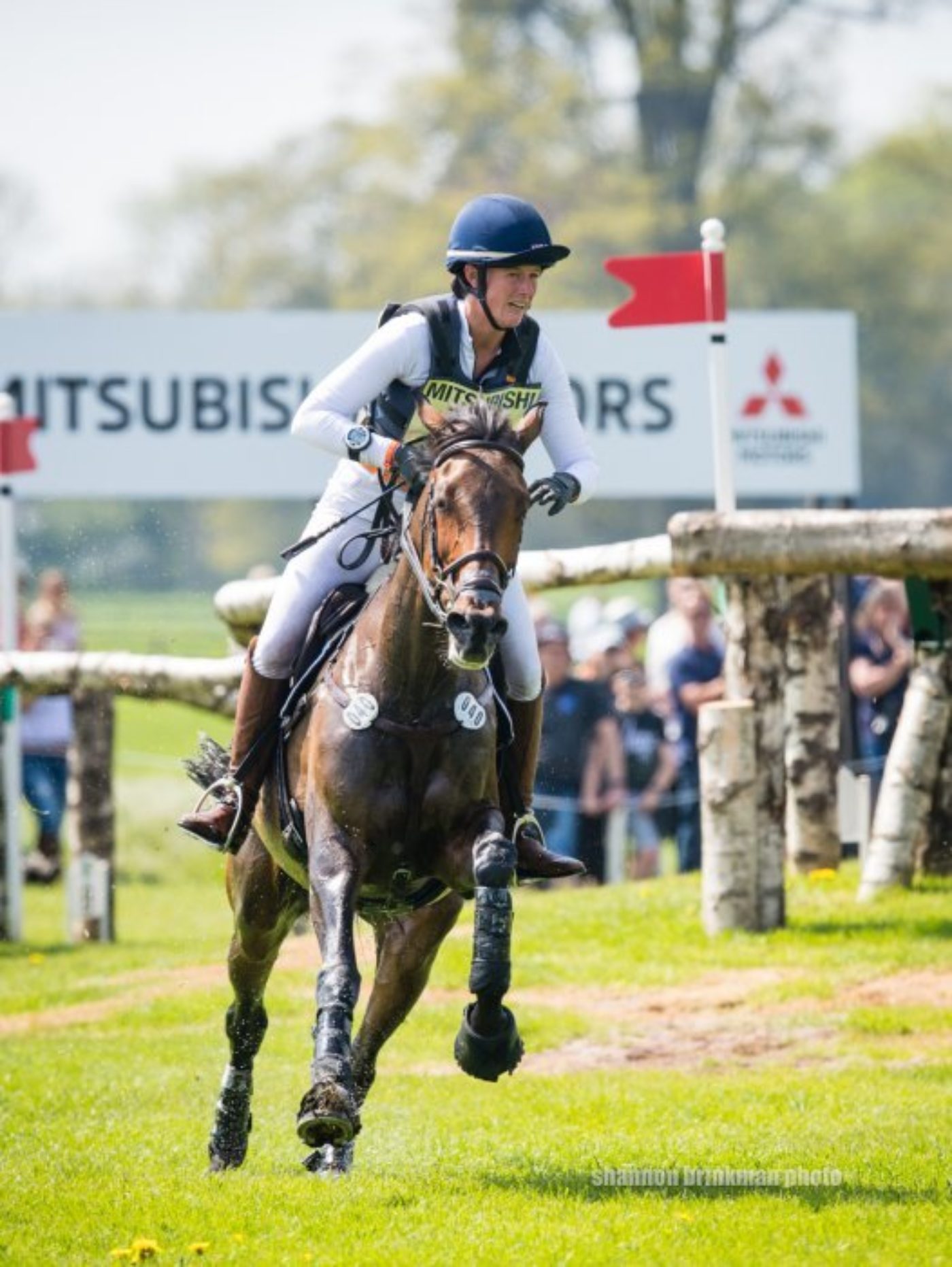 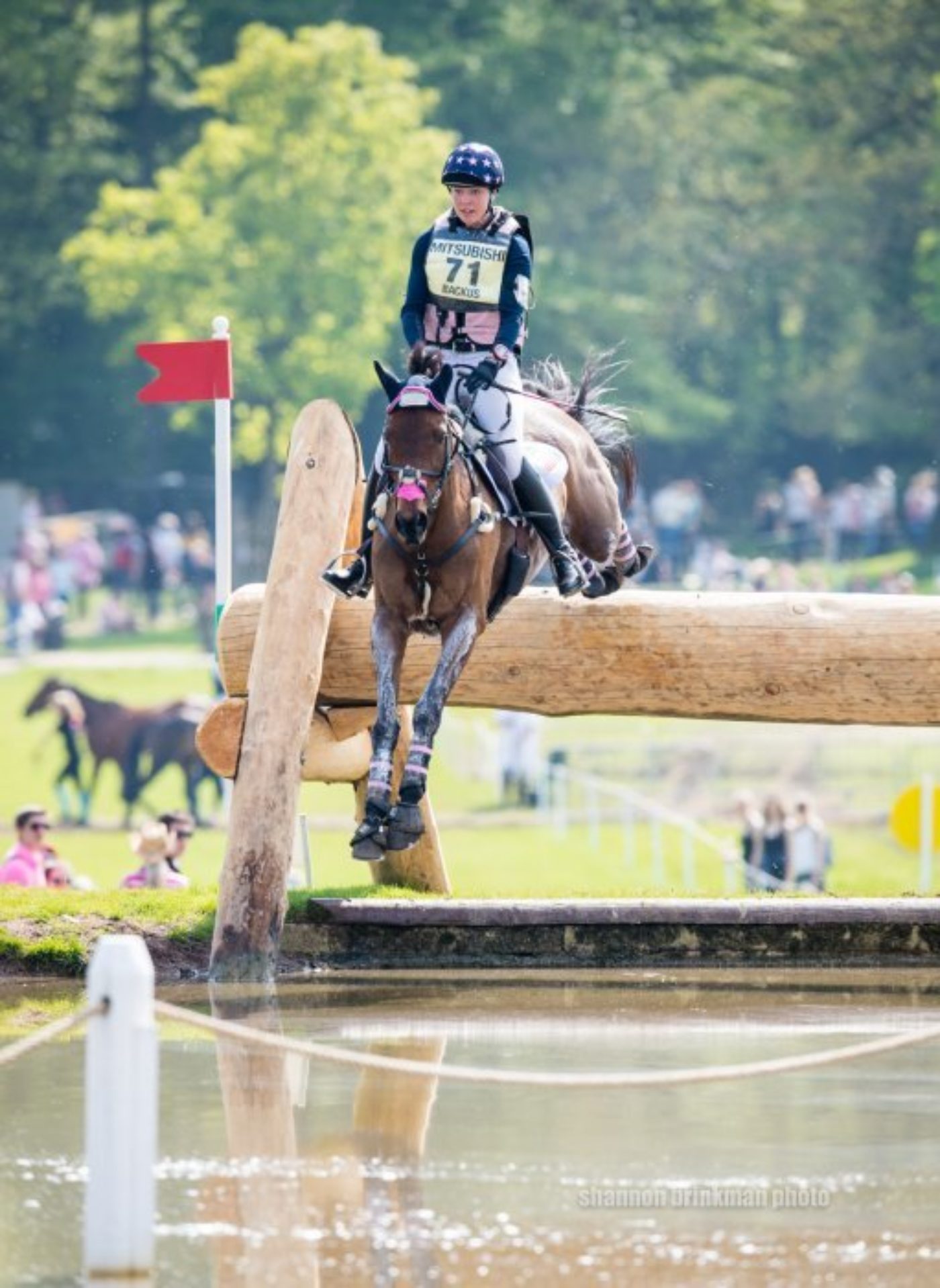 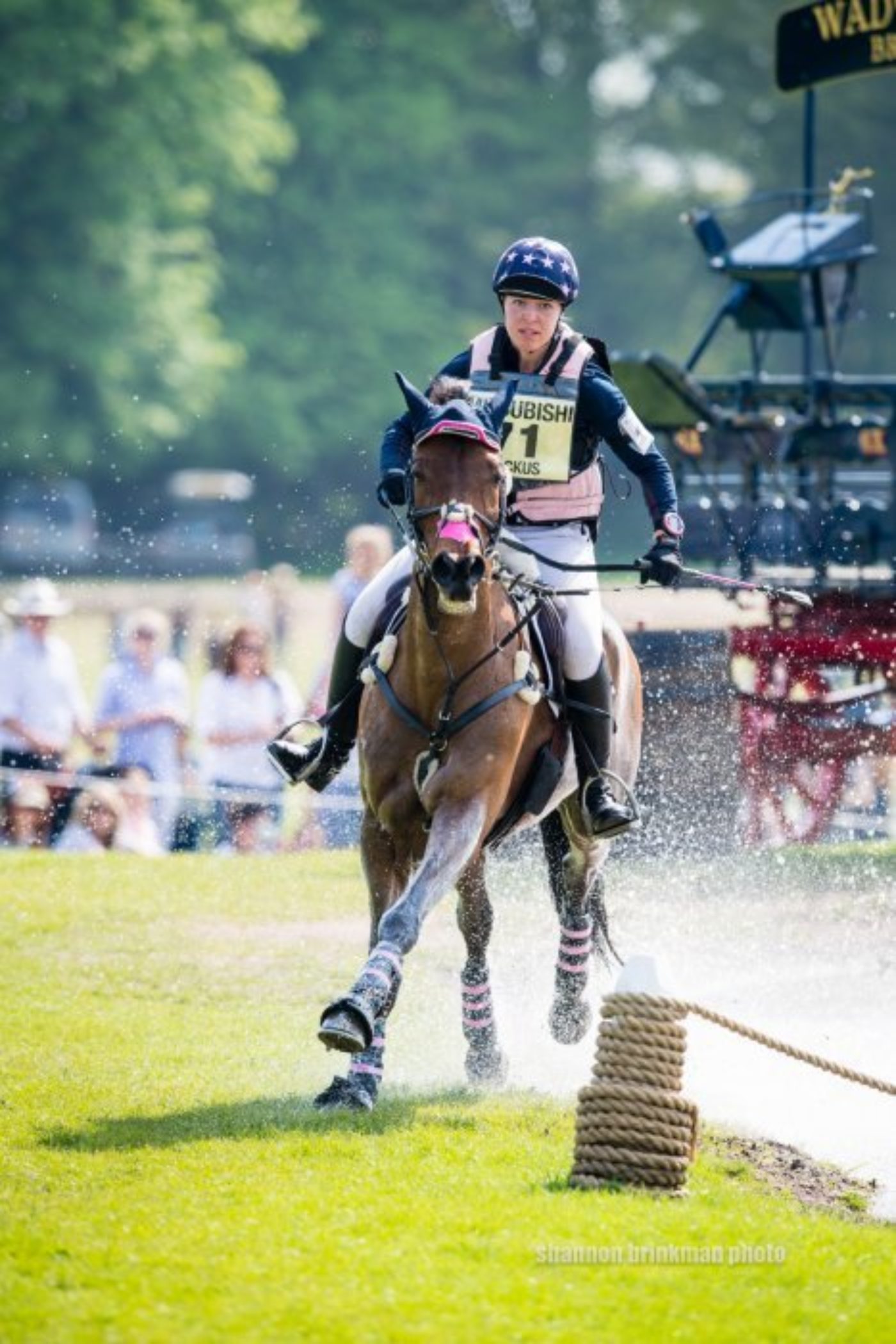 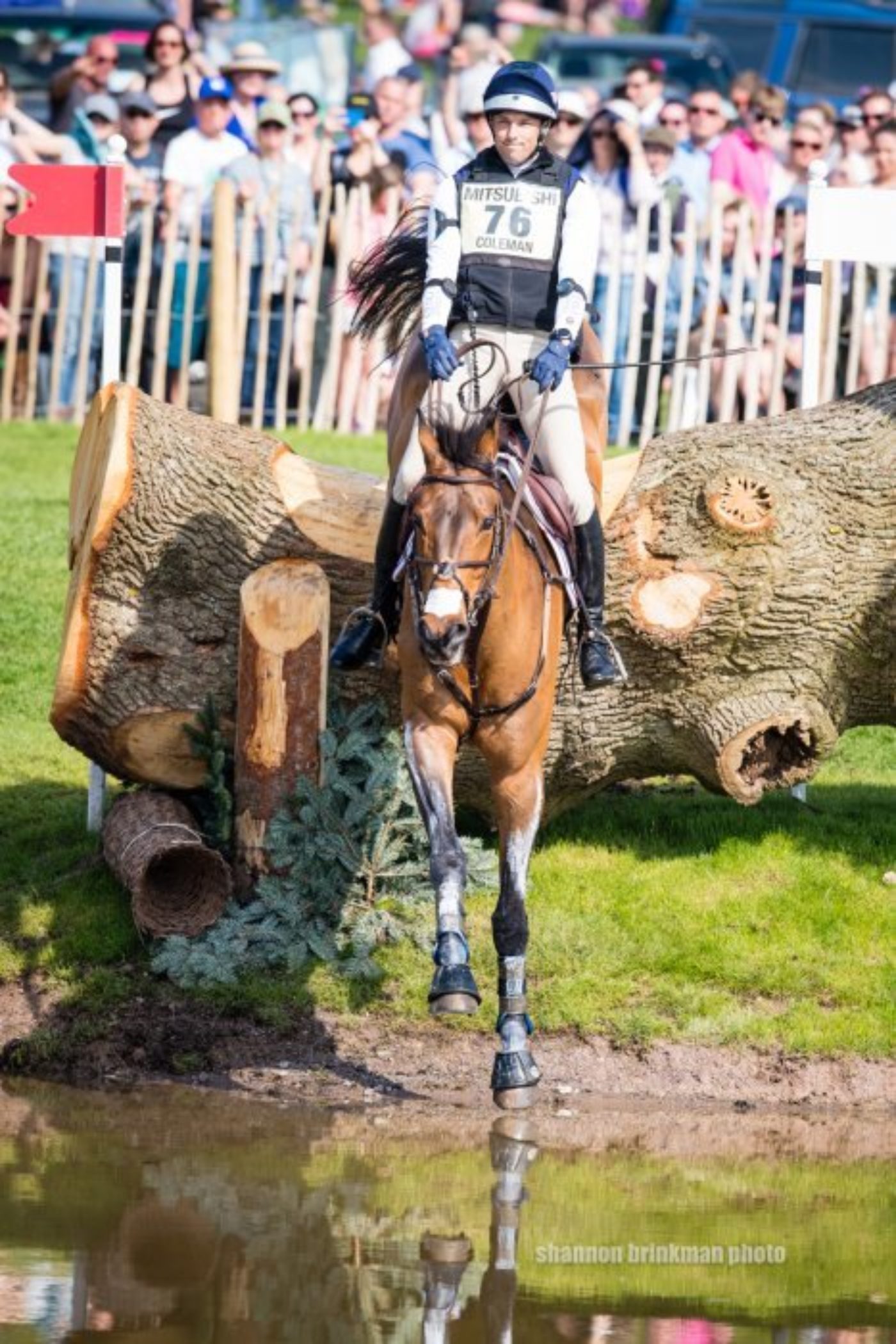 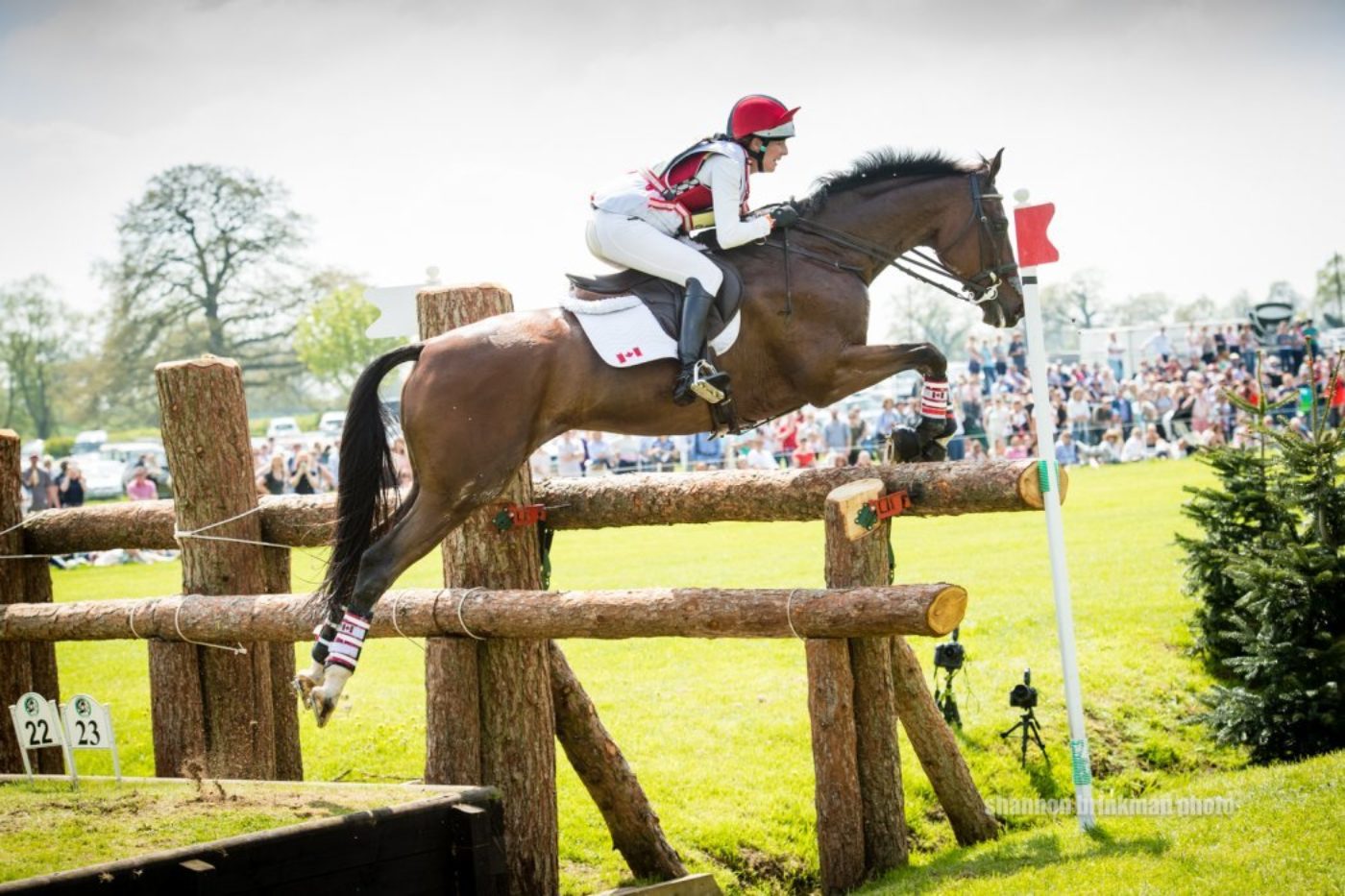 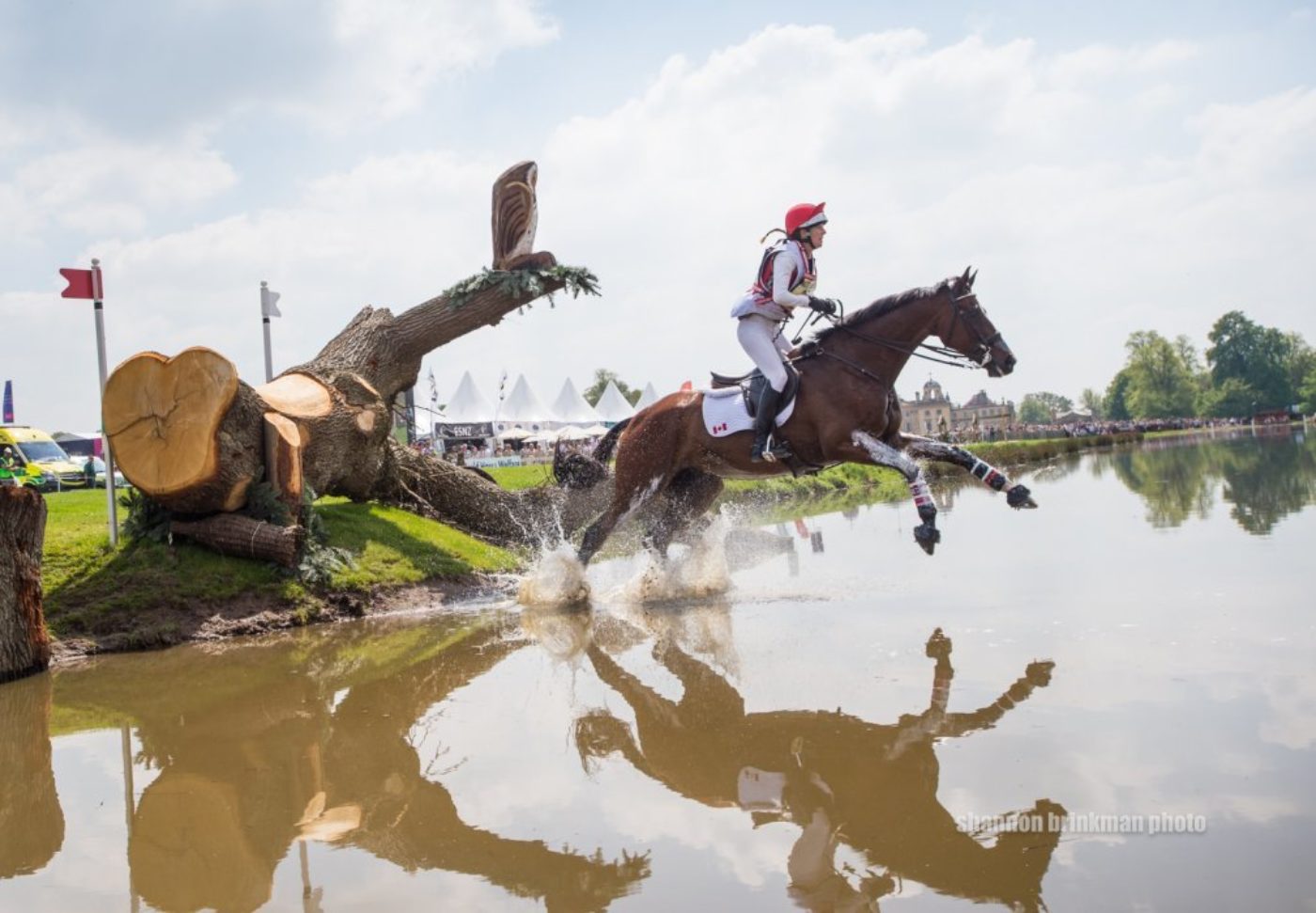 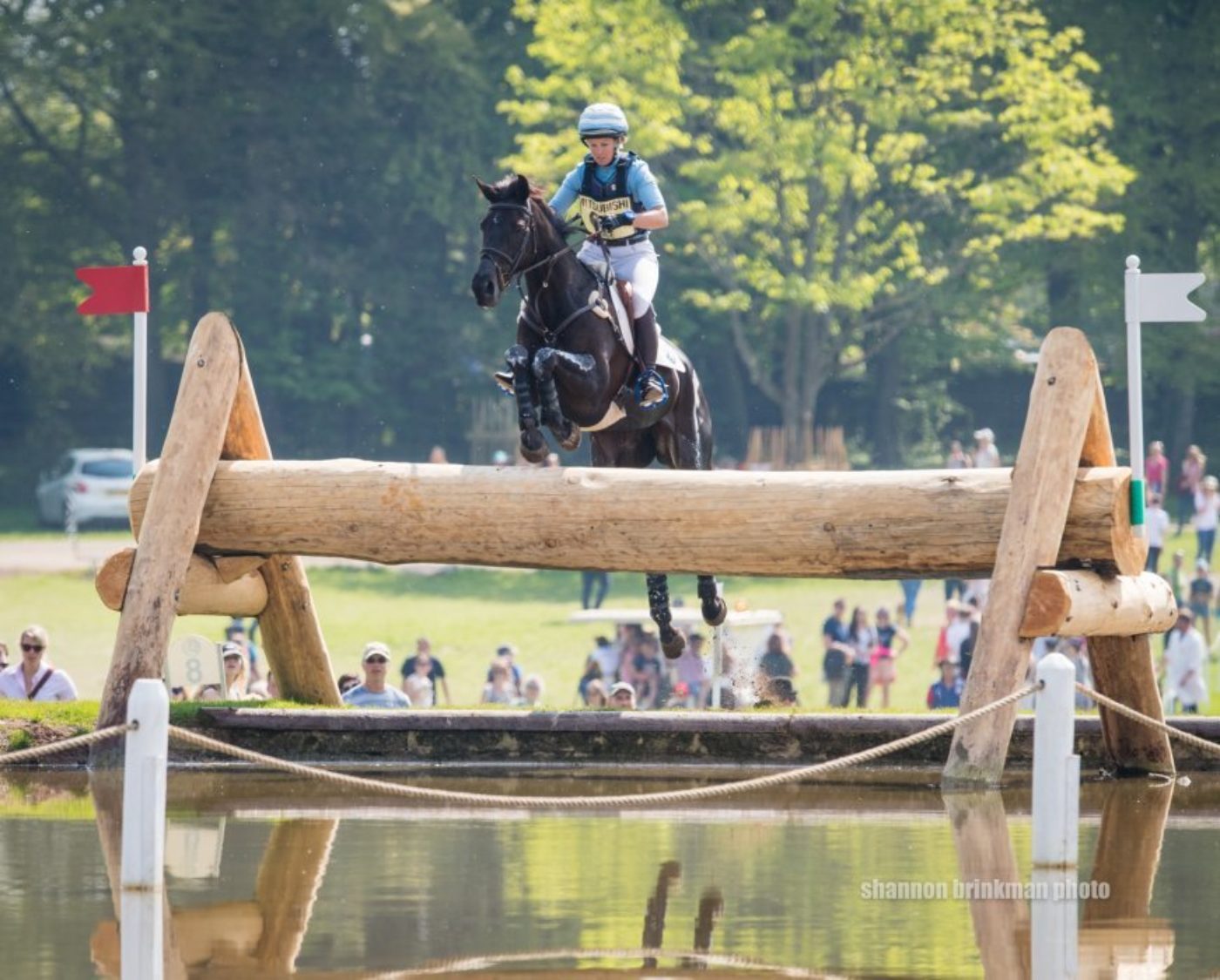 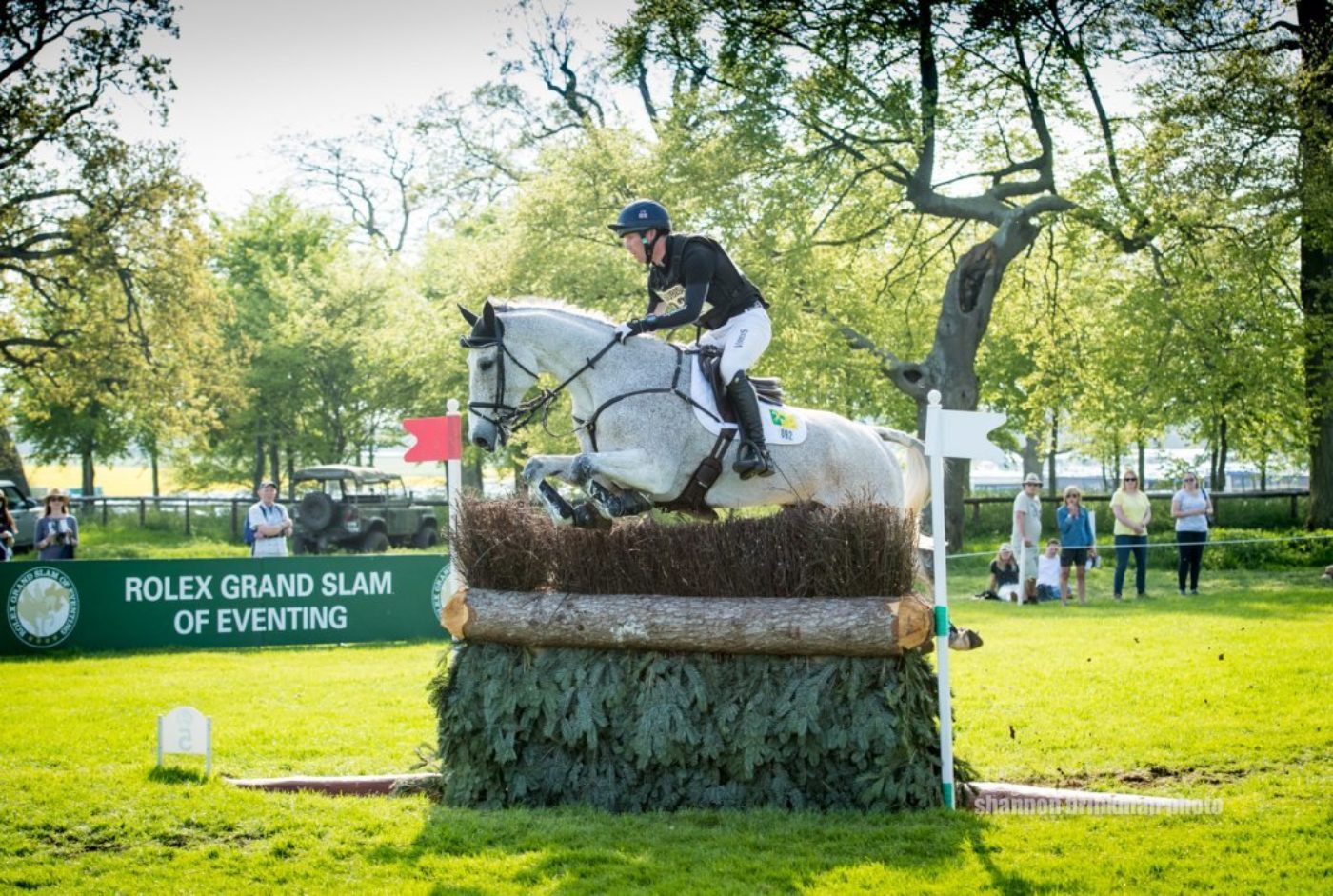 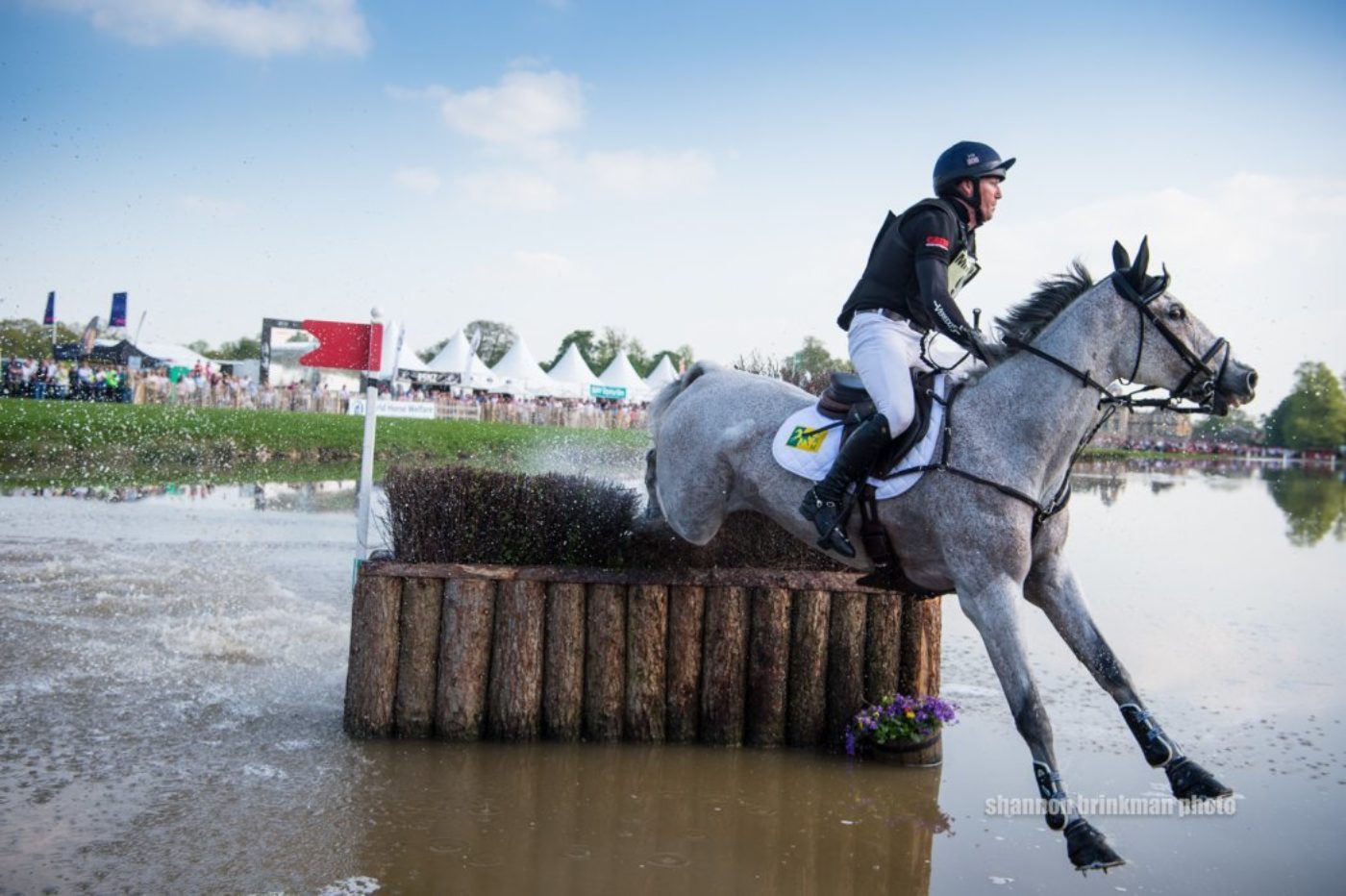 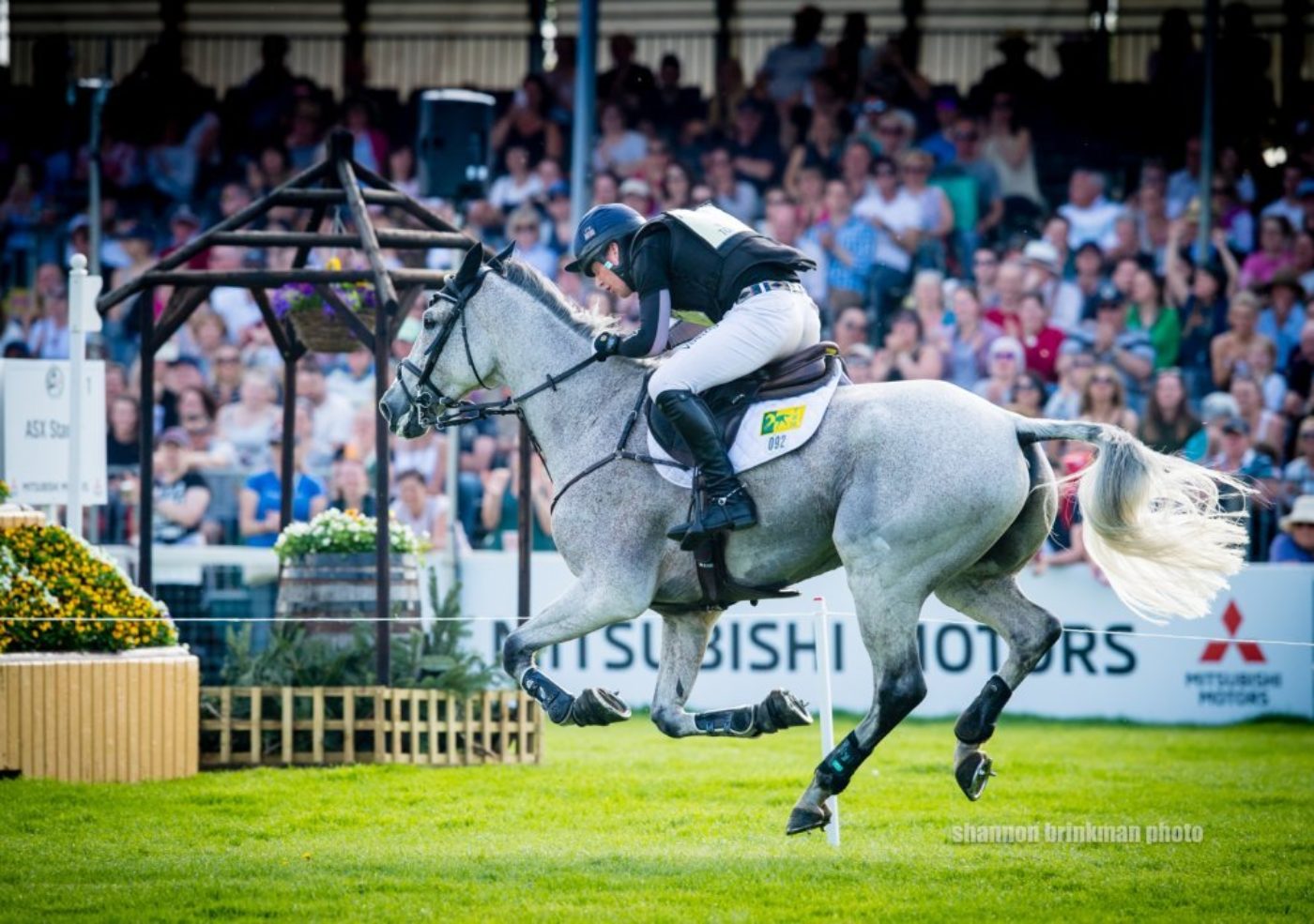