Today was the final day of competition in The Dutta Corp. USEA Young Event Horse (YEH) and USEA Future Event Horse (FEH) West Coast Championships at Twin Rivers Ranch in Paso Robles, California. Activities began on the combined show jumping and cross-country course early in the morning for the YEH 4- and 5-year-old Championships, testing the jumping aptitude of these very promising youngsters. Championship judges Debbie Adams and Peter Gray evaluated seven 4-year-olds and 15 5-year-olds over the course of the morning.

“We’ve really been working hard at keeping the rhythm and it just totally showed up today just keeping the consistency so we can utilize his scope and his jump appropriately,” said Hillas. “He was so bold, he was so confident, and he just loves being out there and you can see it.” Luxury Mail was in 10th place yesterday after the dressage and conformation phases, but today's impressive jumping score of 65.5 bumped him to the top spot on the leaderboard on a final score of 88.6.

The Reserve Champion title in the YEH 5-year-old Championship was taken by Amber Levine on Cellar Farm's Dutch Warmblood gelding, Keep Calm (Biscayo x Beauty), who moved up from third place overnight with a final score of 88.3, just 0.3 points off the leaders. Third place honors went to the Thoroughbred mare Ultimate Irish Rythm (Irish Road x Rhythmos) and her owner and rider, Bruce Hill, on a score of 88.0.

The first place contender in the 4-year-old Championship, Cellar Farm's Dutch Warmblood gelding Leonardo Diterma (Gullet HBC x Gracie Terma), led the way for YEH classes with Levine as the first pair to test the course this morning. “He was super," said Levine of Leonardo Diterma's performance. "He was a star for sure, especially with the limited experience he has.” The pair led the field after the first day of dressage and conformation competition on a score of 25.25, and added a jumping total of 61.8 to their overnight score to win the class on 87.05.

Levine hit the exacta today in the YEH 4-year-old Championship, claiming the Reserve Champion spot with Cellar Farm's Dutch Warmblood gelding Le Top F (Emir R x Zakiya F) on a final score of 84.5. David Koss finished in third with his Oldenberg gelding, Sniper (Self Made x Arancha) on a score of 80.9.

Two special awards were presented at The Dutta Corp. USEA YEH West Coast Championships. The Safe Harbor Award, presented to the young horse who consistently exhibits the most graceful and rider-friendly performance throughout the competition, was presented to Bruce Hill's Ultimate Irish Rhythm. Ultimate Irish Rhythm also won the Thoroughbred Incentive Program (TIP) Award. In the 4-year-old class, the 4-year-old with the best gallop score is presented with a crystal trophy vase and a check for $250 in loving memory of Donald Trotter. This award, presented by Stillwater Farm, was given to Cellar Farm's Le Top F.

The second day of competition at the YEH/FEH West Coast Championships was all about jumping, and after the last horse galloped past the finish flags in the YEH Championships it was time for the nine 3-year-old and five 4-year-old FEH horses to strut their stuff in the jump chute to see who would take home top honors.

Twain’s Fireflight DF (The Twain x Dominga), Sarah Moseley's Oldenburg filly, continued to dazzle the judges and maintained her first-place standing through the jump chute portion of the competition to earn the title of USEA FEH West Coast 3-year-old Champion on a final score of 84.2. The chestnut filly is Moseley’s first experience owning and training a young horse. “I really wanted to experience raising a horse and learning how to train it," she said. "It requires a lot of patience but I wanted to have that experience of the horse completely trusting you."

With only a few points between them, the Reserve Champion ribbon went to the Thoroughbred filly MFS Flywire (Understatement x Bryn Carregwen Tanwen Ten), owned by Carrie Miller and handled by Anna Collier, on a score of 82.0. Third place went to American Quest (Daddy Nose Best x Shellys Terms), a Thoroughbred gelding guided through the weekend by his owner, Emily Russell, to a final score of 79.6.

The FEH 4-year-olds from yesterday's under-saddle testing came back for their chance to wow the judges in the jump chute for the FEH West Coast 4-year-old Championship blue ribbon. With very little jumping experience, Pam Fisher and Elizabeth Koeppel’s Sea Lioness (Sea Lion x Princess Kabbalah) held her lead on a final score of 76.7 for a very nervous and excited Fisher. “I’m thrilled," Fisher said. "She really has very little jumping experience and I really didn’t know what to expect in the jumping chute. She’s just brilliant! She’s got her father’s mind and her mother’s too - they were just good thinkers.”

Final scores can be found here. Read coverage and check out photos from day one of the USEA YEH/FEH West Coast Championships here. 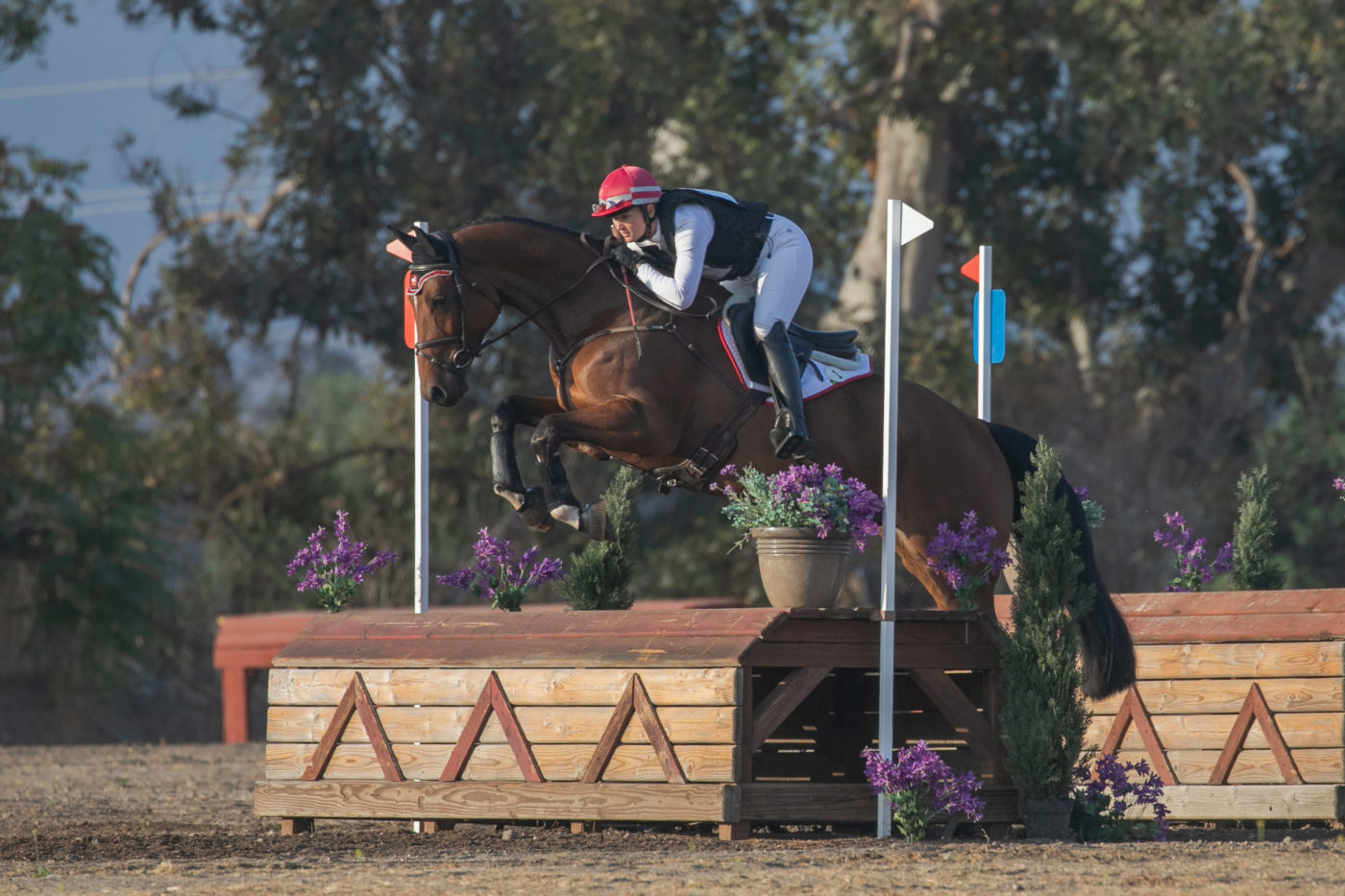 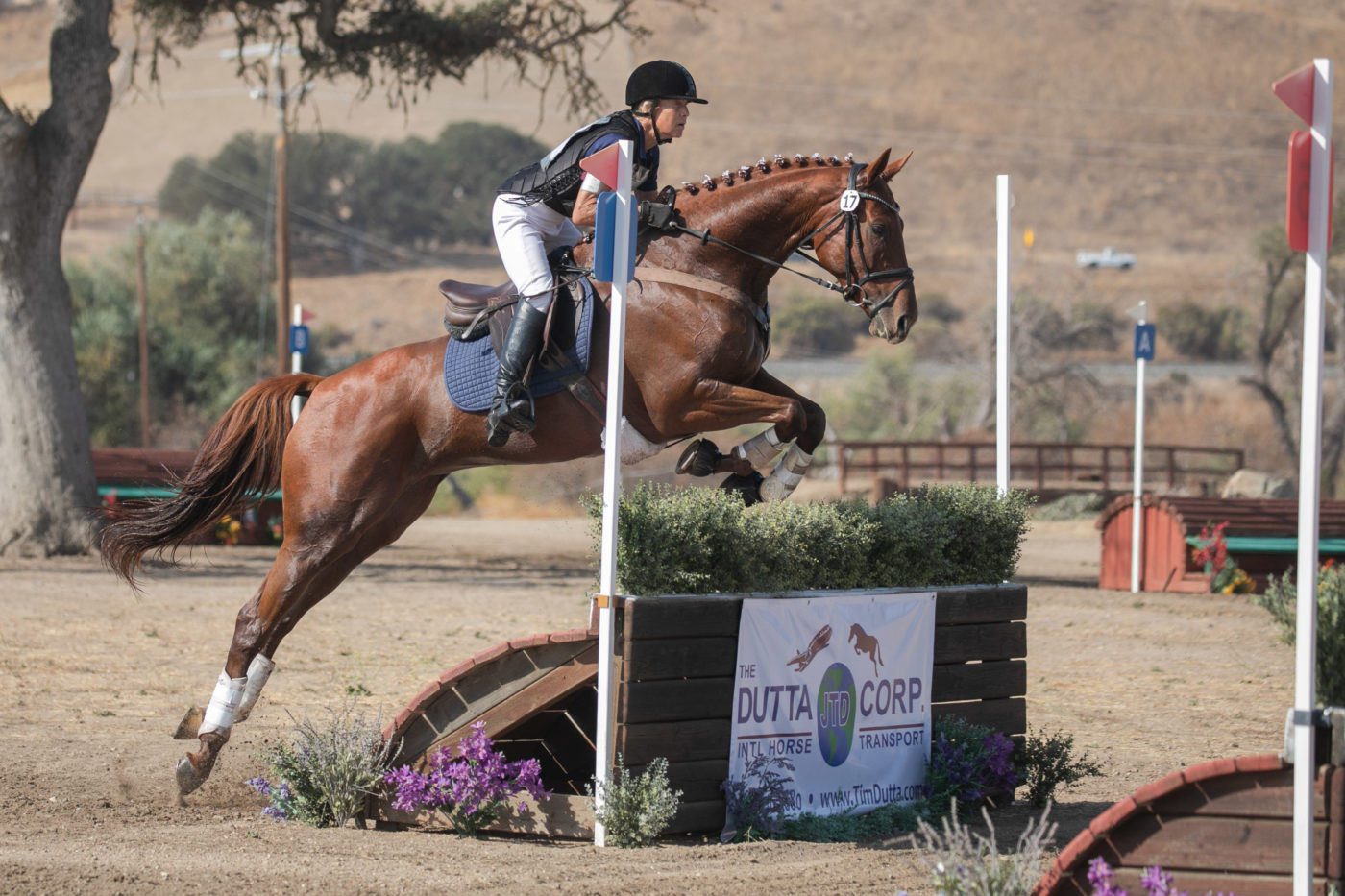 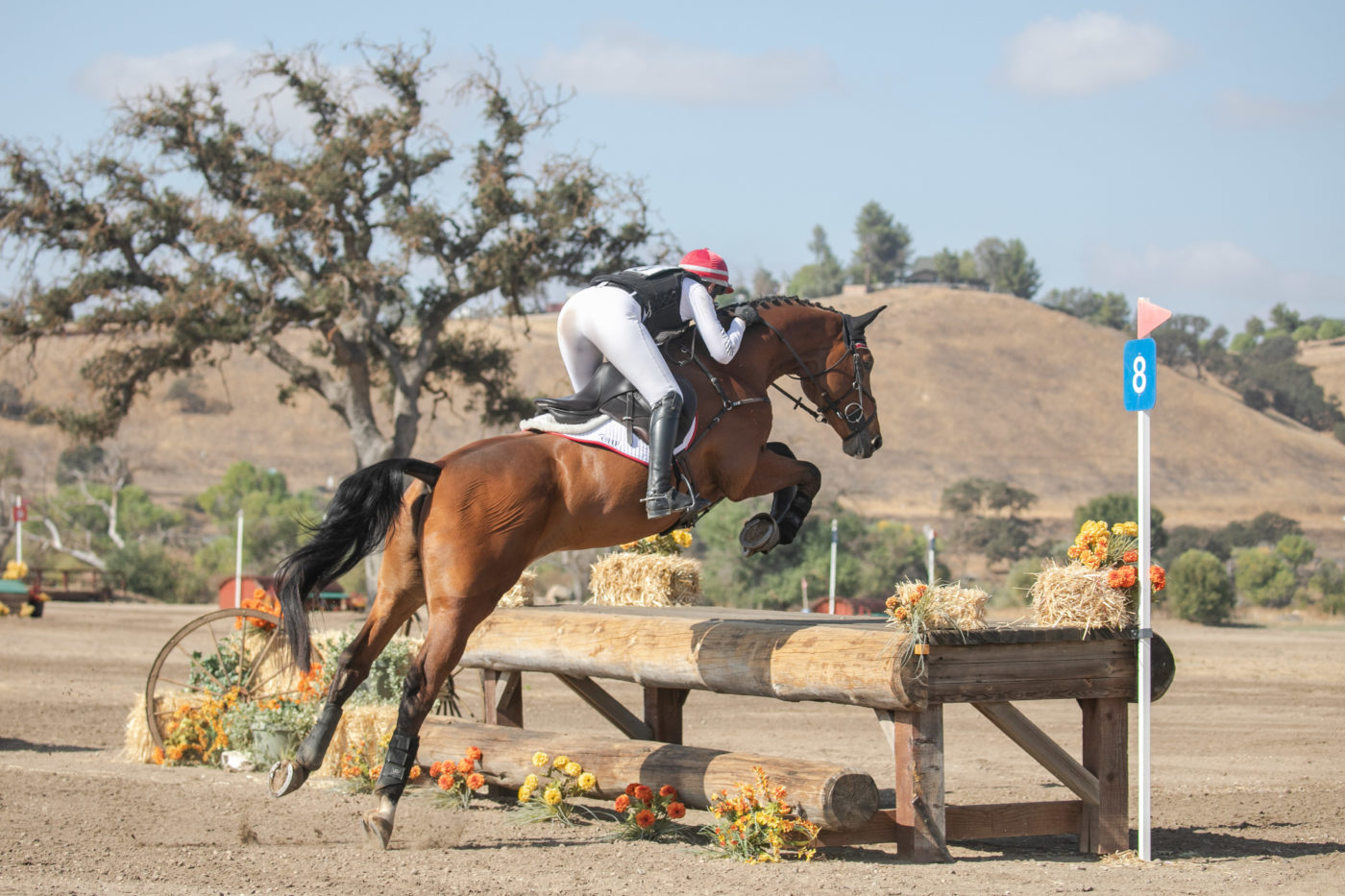 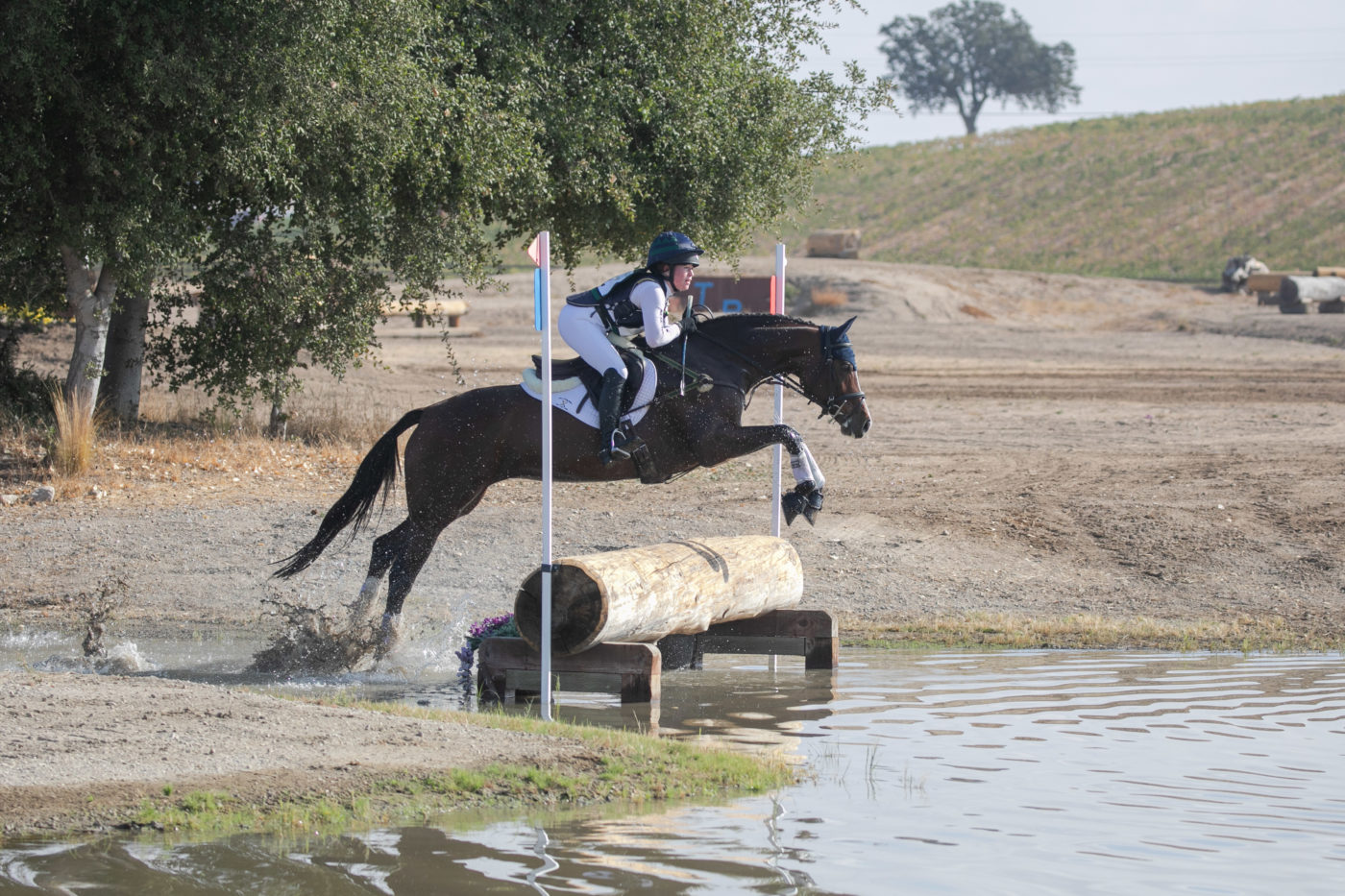 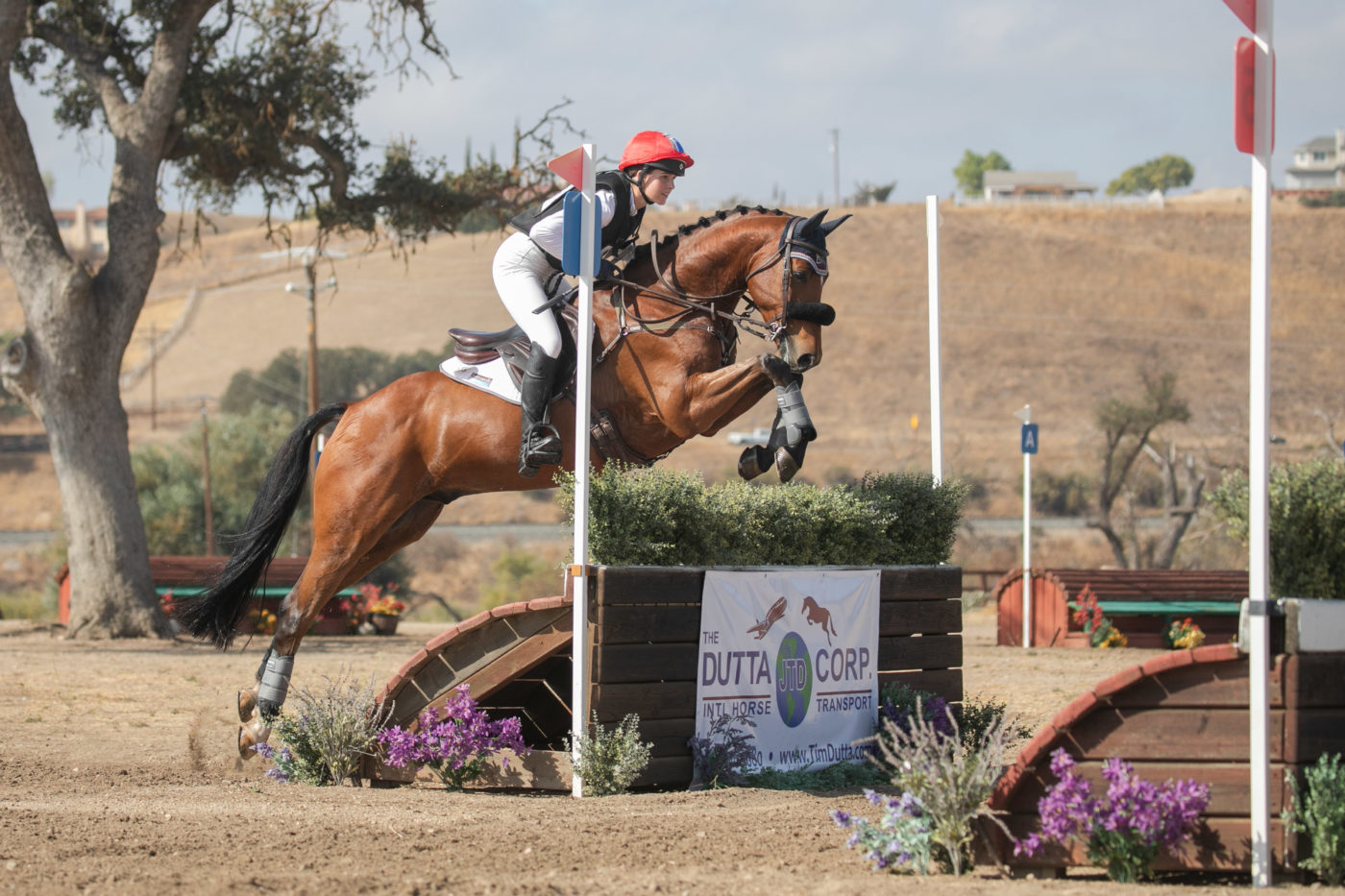 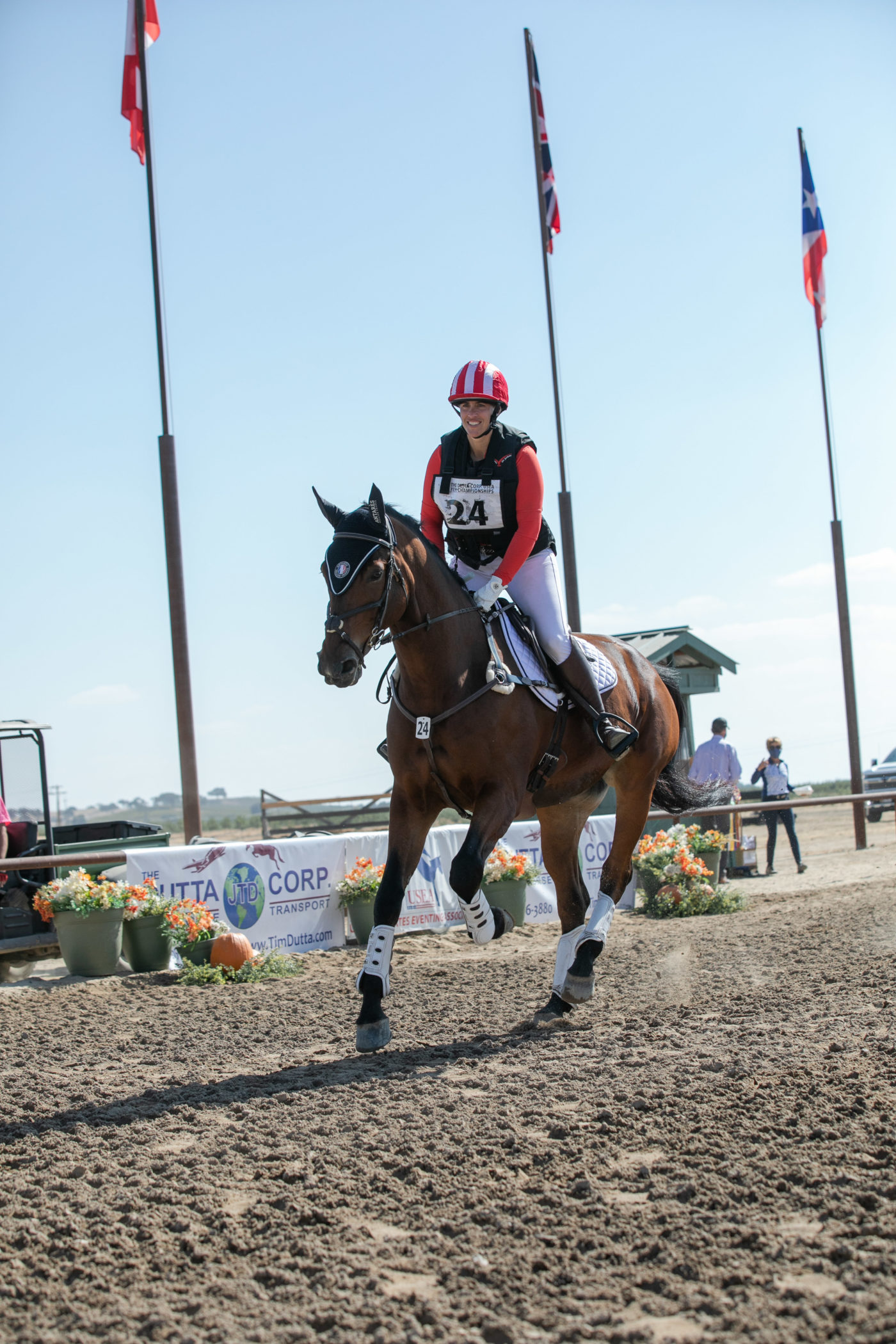 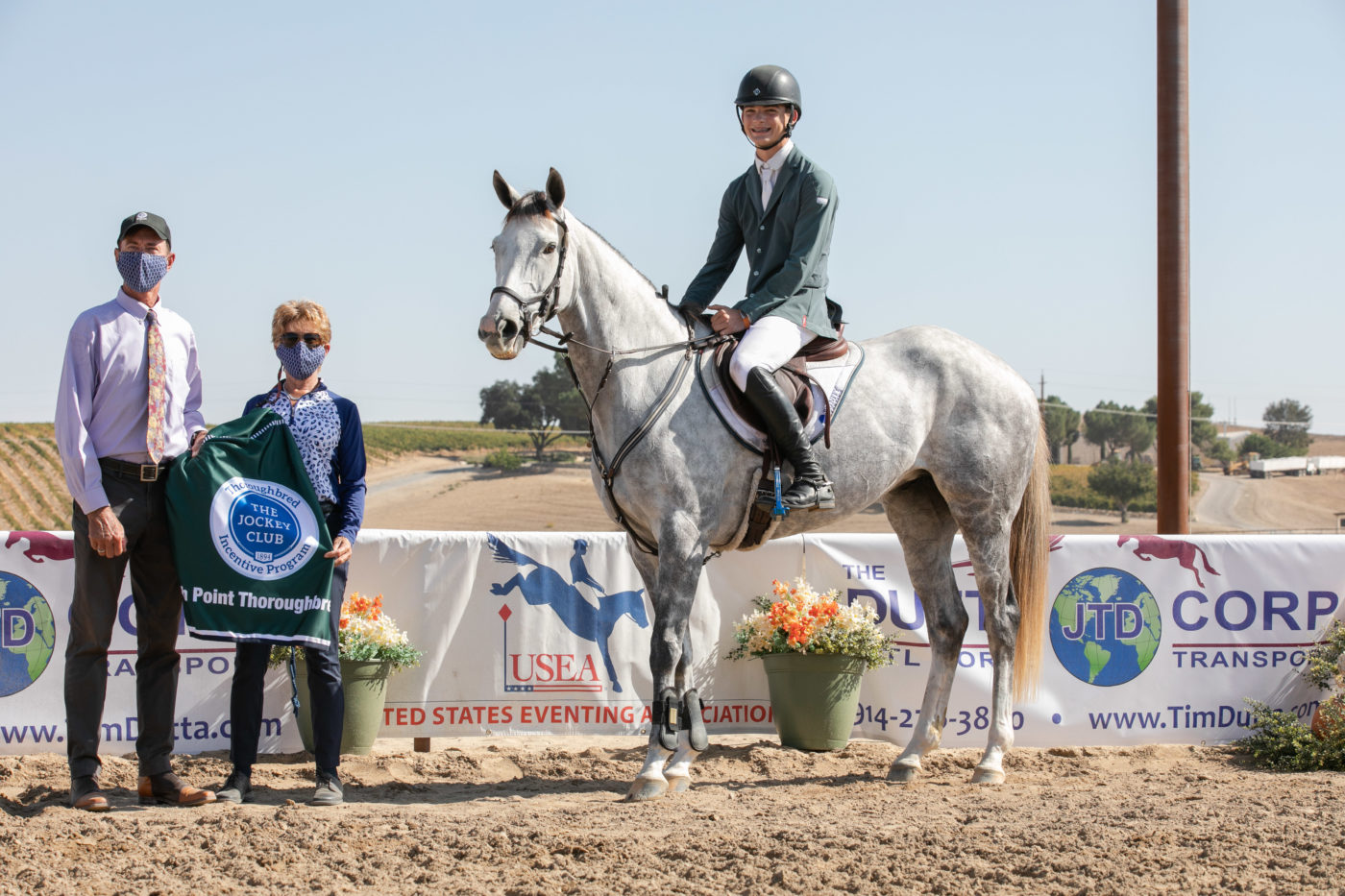 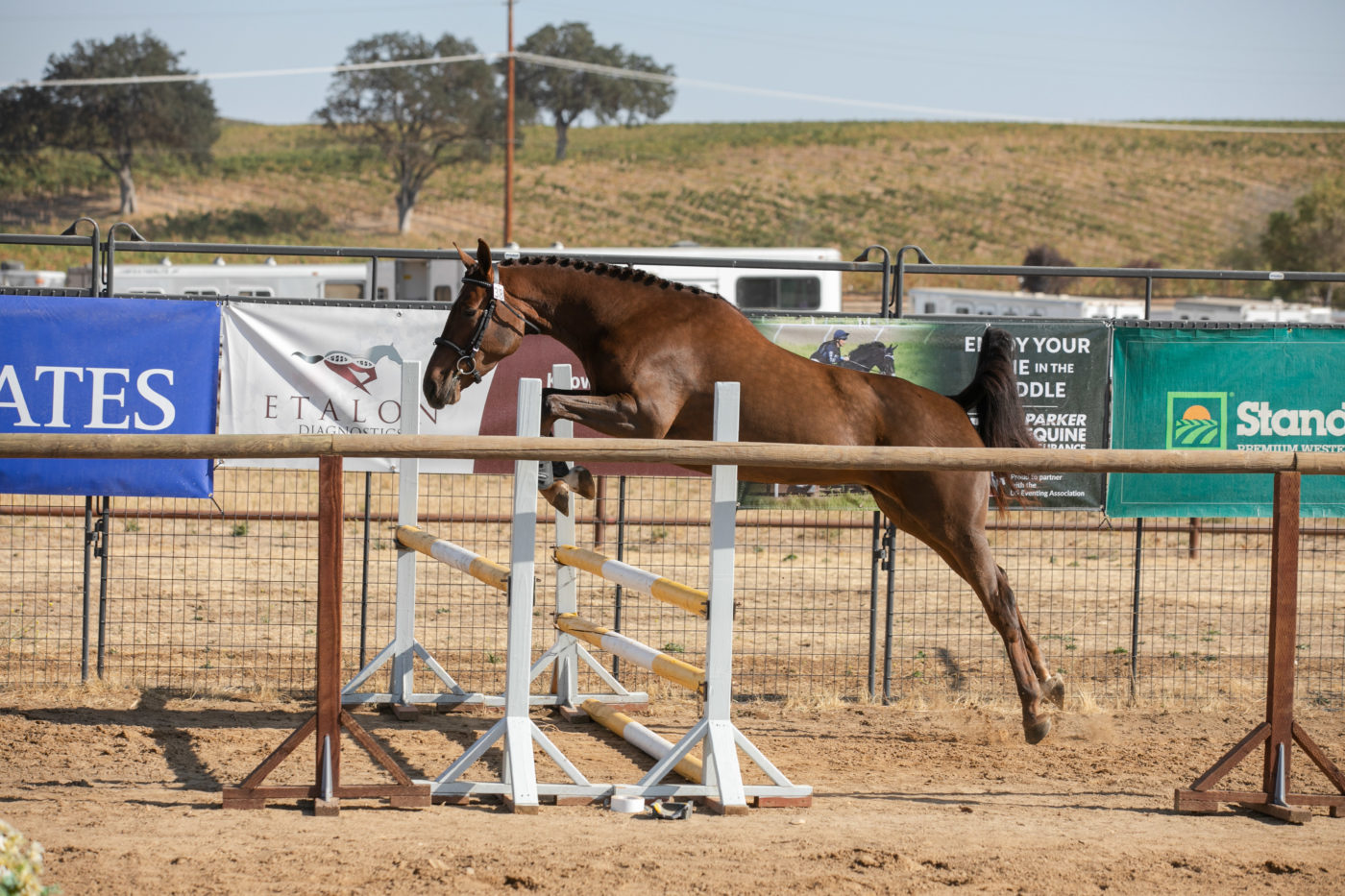 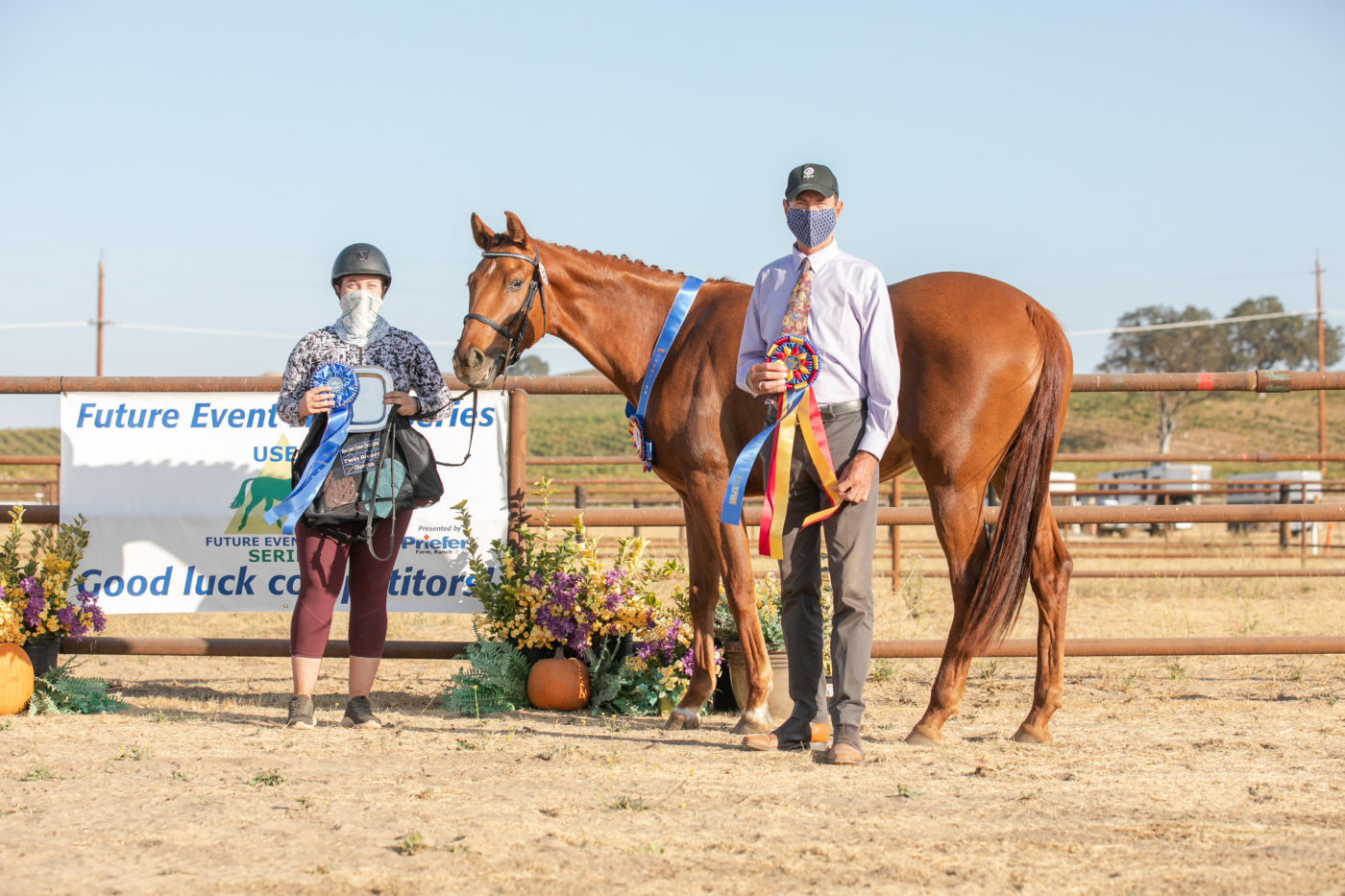 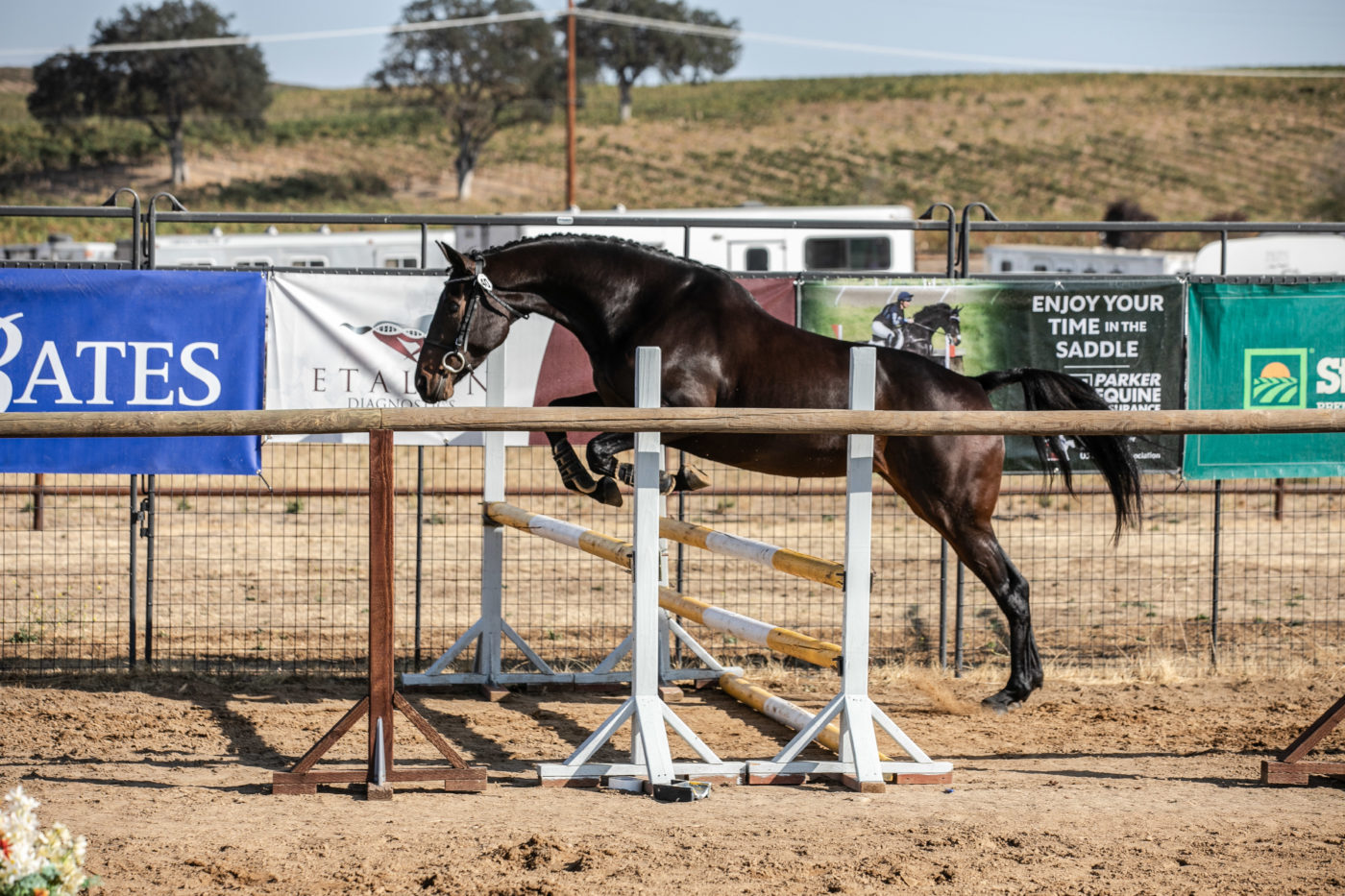