The turning leaves of the vineyards and the crisp, clear blue skies made for an excellent backdrop for the first day of The Dutta Corp. USEA Young Event Horse (YEH) and USEA Future Event Horse (FEH) West Coast Championships at Twin Rivers Ranch in Paso Robles, California. There are six divisions competing this weekend: The Dutta Corp. USEA YEH West Coast 5-year-old and 4-year-old Championships, and the USEA FEH West Coast 4-year-old, 3-year-old, 2-year-old, and Yearling Championships. All six divisions competed today, with the FEH 2-year-old and Yearling classes naming their champions. Peter Gray and Debbie Adams are working together to judge all the divisions.

RSH Goliath (Gringo-Gallipoli x Sam’s Girl), the Hanoverian gelding, lived up to his name, earning the title of FEH 2-year-old Champion for owner and breeder Michelle Cameron Donaldson on a score of 86.1. “His owner couldn’t be here but she is over the moon,” said handler and trainer Chloe Smyth. ”She found him online in Oregon. We really liked his breeding since he had a lot of really good jumping bloodlines. We had him shipped to us at the show here last year and we showed him as a yearling. He’s big and going to get bigger and since she is 6’1” and she loves chestnuts, he fits the bill perfectly.”

Standing in the Reserve Champion position at the end of the day on a score of 84.7 was Sarah McCarthy’s homebred Hanoverian colt, Ferao DFEN (Flexible x Bella Patriot), presented by Max Gerdes. Rounding out the field but not far behind was Nicole Fuentes’s Oldenburg filly, Jungle Love DF (The Twain x Vanity), on a final score of 83.0. The Dragonfire Farm-bred filly managed to show her grace with a little help from handler Earl McFall.

The FEH Yearling Champion title was won by Janine Jaro’s beautiful Belgian Warmblood filly, Trilogy (Claire de Lune x Honor Jean), on a score of 82.4. Jaro, who is also the breeder, had the assistance of handler Ghislaine Homan-Taylor. “I won a breeding to Claire de Lune some years ago in a Calcutta," said Jaro. "I acquired a mare with Secretariat lines and we had a really nice baby out of her. We decided to go ahead and breed her to Claire de Lune. Peter Gray loved her - we couldn’t be more thrilled!”

Very close behind in the Reserve Champion slot was the Connemara gelding Totality DFEN (Redbuds Blue Moon x Shee’s Magic) on a final score of 81.1. Sarah McCarthy is the owner and breeder of this very promising young gelding handled by Gerdes.

After a few turns around the triangle, the overnight leader of the FEH 3-year-old Championship is the Dragonfire Farm-bred Oldenburg filly Twain’s Fireflight DF (The Twain x Dominga), who is owned by Sarah Moseley. “We knew this one was going to be pretty cool,” said Earl McFall of Twain’s Fireflight DF, who scored an 85.0 in the first phase of the competition. “She has a big personality, she’s confident, and she moves big and she owns the ring when she comes in and I just love that about her.”

Taking the second-place spot in the FEH 3-year-old Championship on a score of 82.6 is the Thoroughbred filly MFS Flywire (Understatement x Bryn Carregwen Tanwen Teg) for owner and breeder Carrie Miller. Andrea Baxter handled Aberstar (Aberjack x A Bid for Stardom), a Thoroughbred gelding owned and bred by Michlynn Sterling, to an overnight third-place position on a score of 80.6.

The FEH 4-year-olds were judged on their conformation as well as their abilities under saddle today. Sea Lioness (Sea Lion x Princess Kabbalah), a homebred of Pam Fisher’s who she co-owns with Elizabeth Koeppel, is the current leader of the FEH 4-year-old Championship on a score of 78.4. Sea Lioness was sired by Sea Lion, who Fisher competed with at the Kentucky Three-Day Event in 2012. “I always told Sea Lion if he took me to [Kentucky] he could breed,” said Fisher, “so I bred Sea Lion to Princess Kabbalah…[Sea Lioness] has been very independent, very smart – well, her father is smart and she is like her father. She’s very brave and focused.”

Following close behind is the Dutch Warmblood gelding Fleeceworks L’Sprout (Gaspard de la Nuit x WowoIDA), who is owned and bred by Judith McSwain and being shown this weekend by Charlotte Babbitt, on a score of 77.7. The third-place spot is currently occupied by Keepsake (Ranch Samaguy Dream-Boy Kurt x My Emy My Amy), an American Warmblood gelding owned and bred by Natalie Kraus and shown by Caitlin Davidson, on a score of 76.4.

Both the FEH 3-year-olds and the FEH 4-year-olds will demonstrate their prowess over fences in the jump chute portion of the competition tomorrow afternoon.

Before the FEH divisions took their turn in the afternoon, the YEH 4- and 5-year-olds completed the dressage and conformation portion of the competition in The Dutta Corp. USEA Young Event Horse West Coast Championship. In the YEH 5-year-old Championship, Jennifer Wooten-Macouzet piloted Alison Hill’s Danish Warmblood mare Kowenna (Freeman VDL x Rowenna) to the first place spot on an overnight score of 24.7. “She arrived in Jennifer's barn on the third week in July," said an elated Hill. "We didn’t really have plans necessarily to compete her. We wanted to give Jen the time to see what she would do and where she was at. She was ready to come in September for the young horse qualifier and she did well and has continued to progress."

Also in the YEH 5-year-old Championship, the German Sport Horse gelding Lordley SRS (Lordanos x Do My Best) was ridden to second place by his owner and breeder, Savannah Gwin, on a score of 24.6. Third place is currently held by Amber Levine on Cellar Farm’s Keep Calm (Biscayo x Beauty), a Dutch Warmblood gelding, on a score of 24.4.

The YEH 4-year-olds also did their dressage and conformation tests today. Levine is solidifying her relationship with her new mount, Cellar Farm's Dutch Warmblood gelding Leonardo Diterma (Gullet HBC x Gracie Terma), with a first-place standing on a score of 25.25. “We purchased him in Holland," said Levine. "We have a good friend there who bred one of my Advanced horses, Carry On. His name is Maarten Groeneveld. He has found us numerous, incredibly nice Dutch horses. This one just came about six weeks ago.”

The YEH competitors will complete the final phase of competition tomorrow – a jumping and galloping test with a mix of show jumping and cross-country fences.

Full scores can be found here, as well as times for tomorrow's competition for the YEH 4- and 5-year-olds and FEH 3- and 4-year-olds. Ride On Video will be live streaming the jumping phases for YEH and FEH on Saturday. Visit www.rideonvideo.net for details. 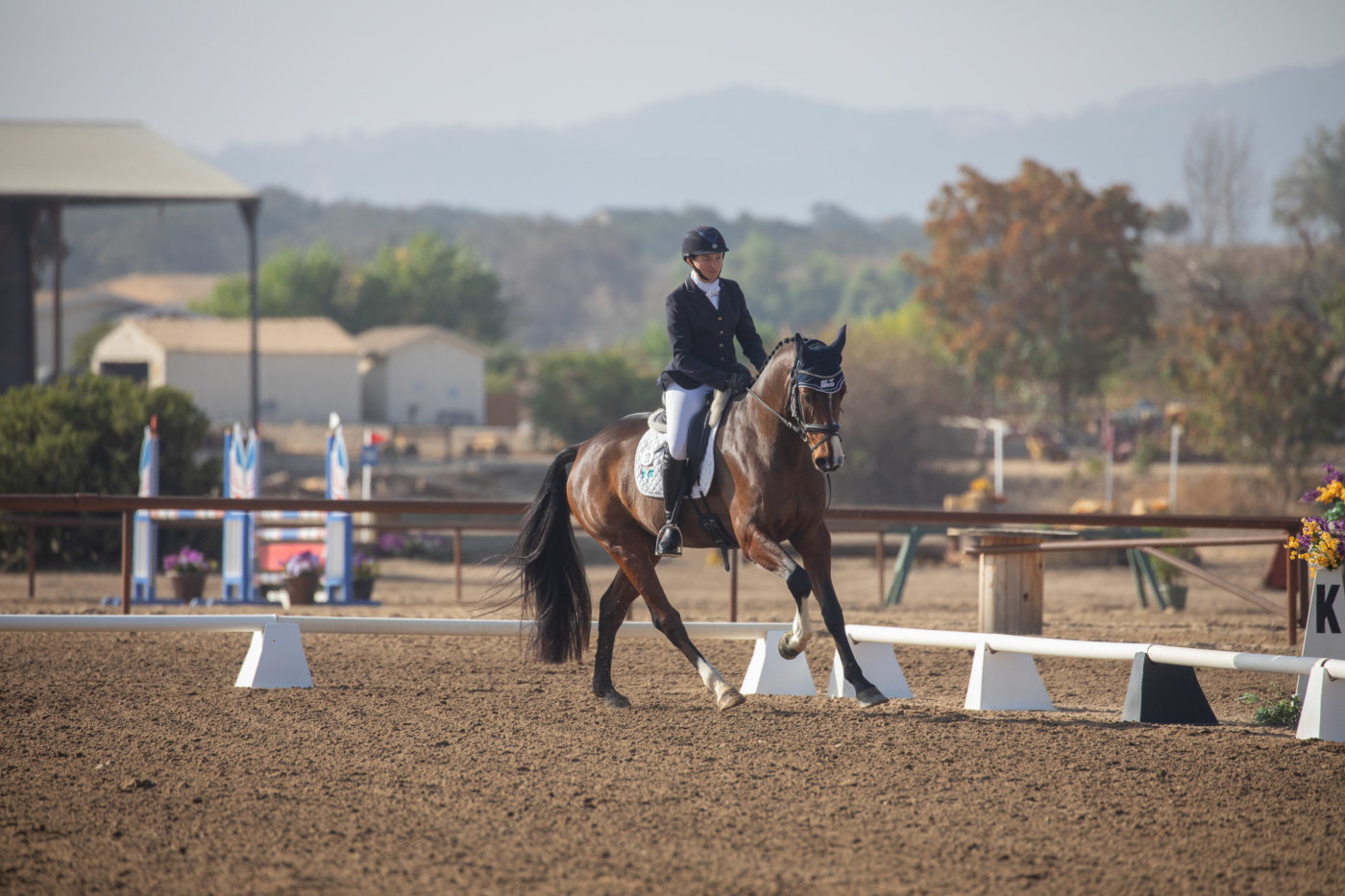 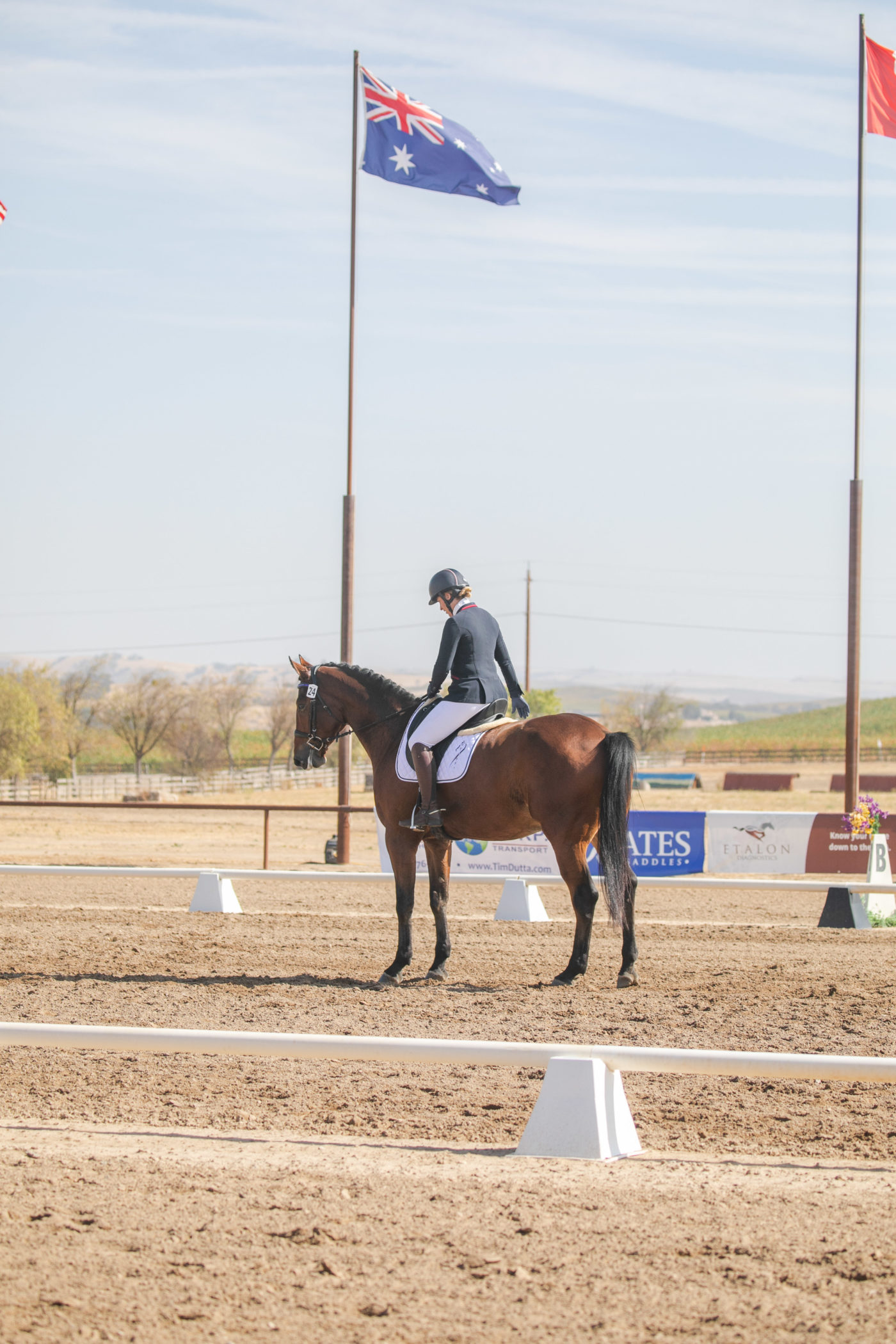 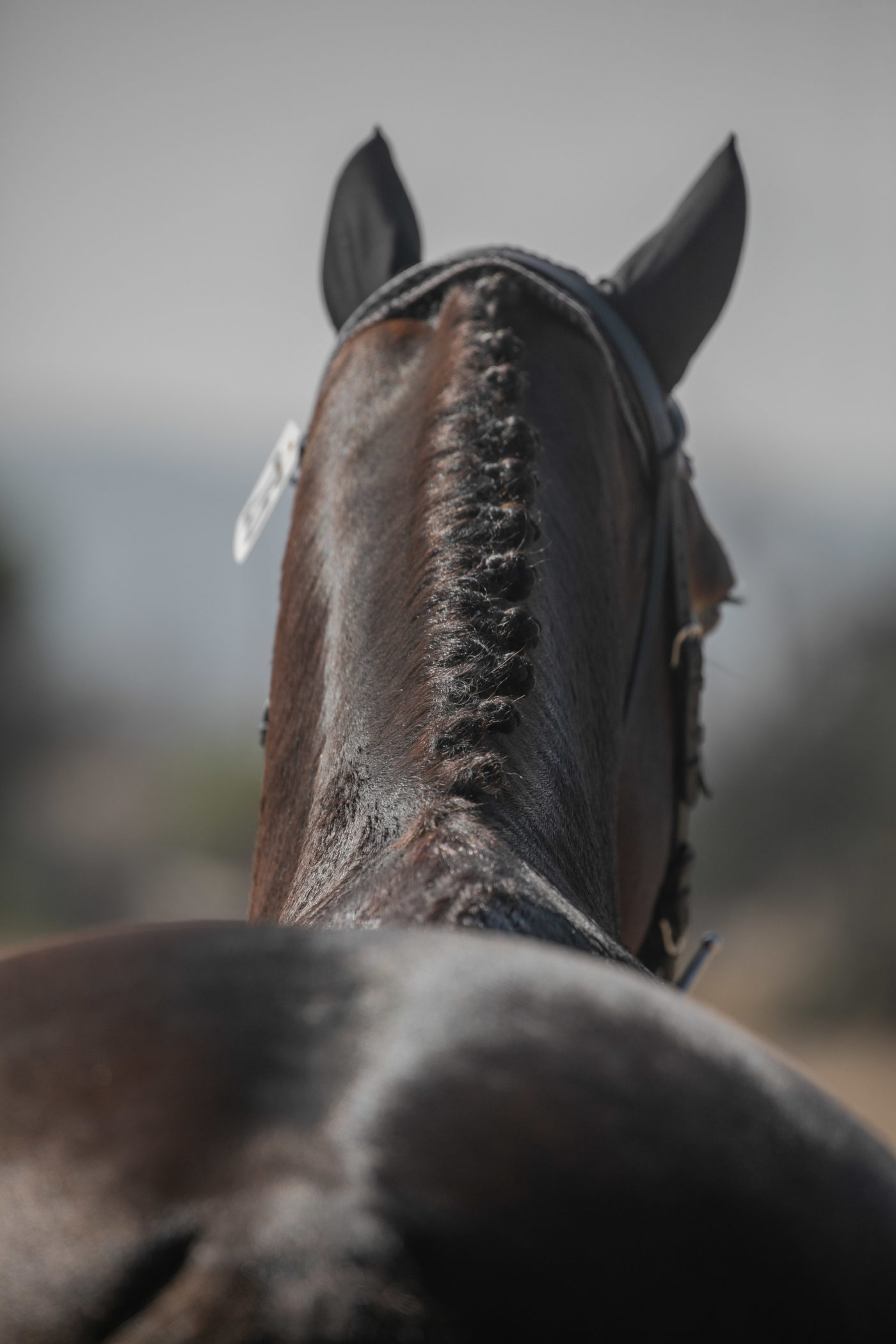 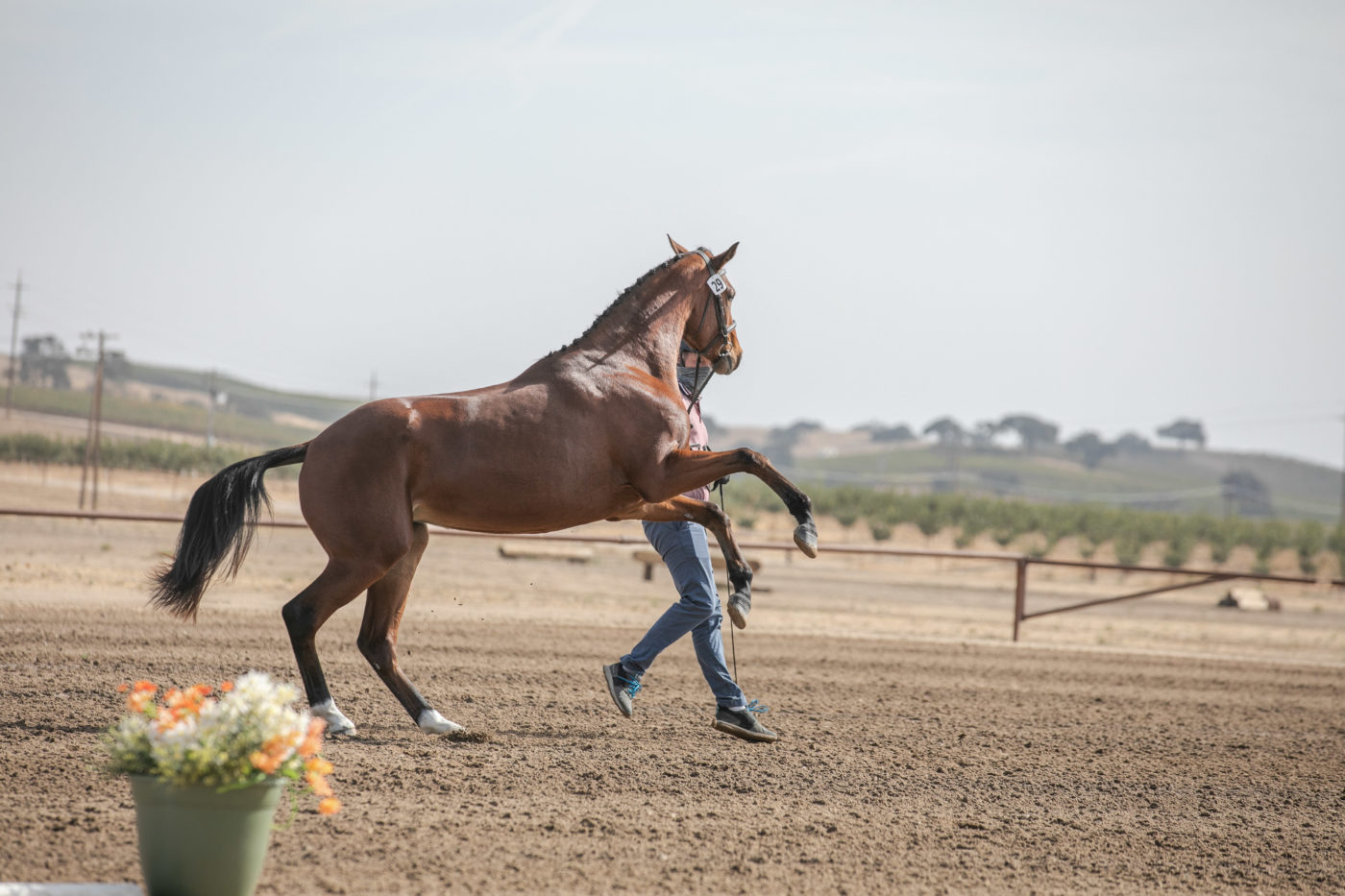 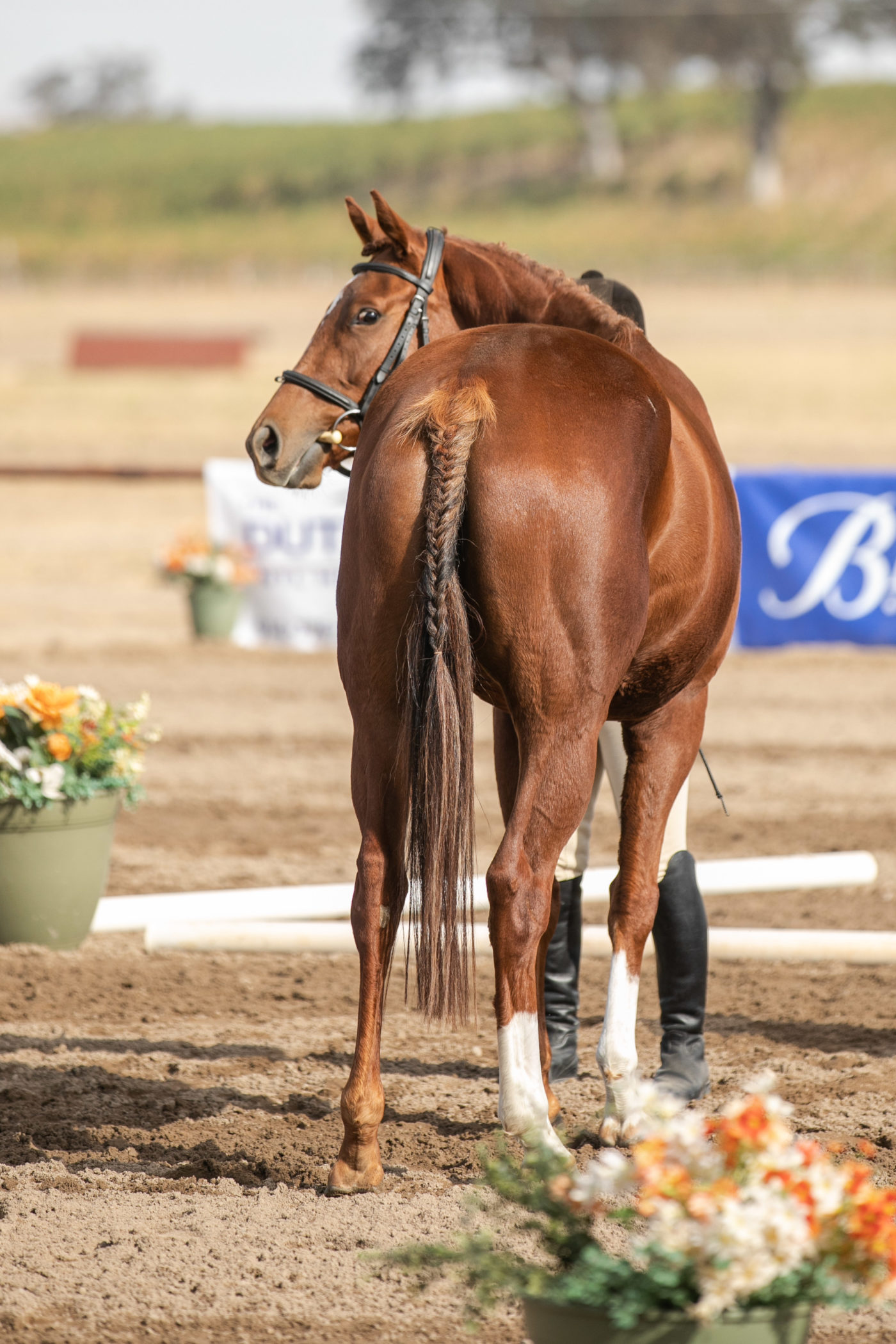 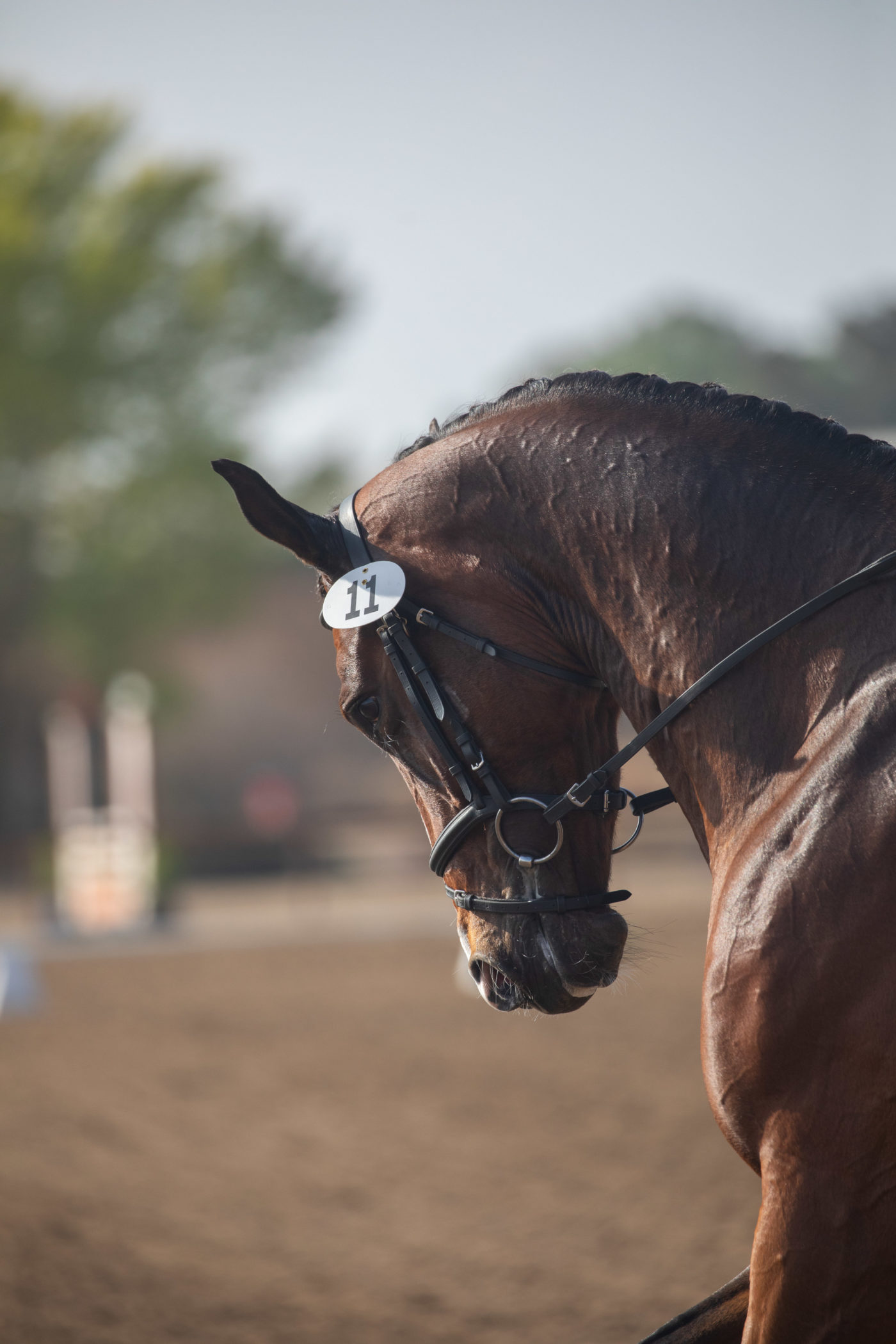