Just a month ago Mara DePuy and Congo Brazzaville C were in a very similar position – leading after dressage at the Fair Hill CCI4*-L, but a fall at the final water dashed their hopes of a victory. DePuy rerouted the 12-year-old KWPN gelding (Tangelo Van De Zuuthoeve x Mexico M) to the Ocala Jockey Club International CCI4*-L and is currently at the top of the division on a 28.5.

“My horse had about 10 days completely off [after Fair Hill],” said DePuy of the gelding she owns with David and Mary Clark Regamey. “What made the decision [to reroute] was that he was squealing and running around his field and normally Congo would be having naps after a hard event. So, he definitely was not ready to be done, and I put him back into hacking and hacked and flatted for a week, did one cross-country school, one gallop, and here we are. The dressage was the one part that was lacking because I didn't want to drill on him . . . if at any point he told me he was tired or sore or whatever after Fair Hill, I would have waited 'til next year.”

“The test was good enough – I still think it can always be better,” continued DePuy. “My horse was good, he didn't do anything wrong, I just didn't feel like he was quite as through maybe as he was at Fair Hill. But still, very correct and still good.”

This is DePuy’s first trip to the Ocala Jockey Club and she made the long trip from her base in Virginia with Congo and is looking for a competitive run tomorrow over Clayton Fredericks 10 minute 26 second course.

“This venue is amazing. I've never been to this event before, and it's so not typical what you'd think of Florida. The land is amazing and it's a proper, proper four-star – there's certainly enough to do. Obviously, it's a good course, there are fair questions, I think there's a lot to do out there, and it's even a little bit longer than Fair Hill. The ground is perfect of course too,” concluded DePuy.

The only other pair to break into the 20s this morning was the first of the 31 horses to go – Phillip Dutton and Long Island T, the syndicate-owned 13-year-old Oldenburg/Thoroughbred gelding (Ludwig Von Bayern x Hauptsbuch Highlight) who Dutton is riding for Boyd Martin who is out with an injury.

“I was ecstatic with Ludwig this morning, he went really well,” said Dutton after his test. “Silva and Boyd have done a great job with him, he just gets in the arena and understands what he has to do and goes about it in a pretty matter-of-fact way. There’s obviously a bit of improvement there but overall we haven’t been together too long so I was really pleased. It was helpful having Boyd here for my final warm-up: he told me Ludwig sometimes gets a little nervous in the halts, and that he thought he would come down a little lower in front once he got in the ring so that was useful to know as every horse reacts differently.”

“I thought he was a good boy, he tried in there. I thought his trot work was quite good and his walk would be his weakest gait,” said Symansky. “I think there's a lot of atmosphere in this arena with the flags and all the tents around, but I think it's very hard for the horses to have that fishbowl feel when you're doing your walk back towards that hill. So, I thought I gave away some marks in the walk and canter, but he was quite a good boy. He's been ridden a lot recently, I had a less than ideal lead-up coming into it and then he got here and was quite wild, so I've been spending most of my time hanging out with him on his back and off his back.”

As for the cross-country course Symansky thinks that it looks good, but it is twistier than in years’ past. “I do think time will be harder to make than it has in the past because there's a little bit less galloping,” she explained. [Fredericks] has been clever about what he's done with some of the lanes to ask a little bit of a different question or some of the same questions, but just changed around how he gets you there. I think the ground should be good, I think it's great that we had the rain. That did nothing but help it. It looks like a good track – it doesn't feel soft for sure. I think there's questions all the way up until the end.”

Coolio’s spring was focused on preparing for the Pan American Games and he had a vacation after, so Symansky said he is a bit light on runs, “But he had a jump on Monday and Tuesday, and I just have to rely on the fact that he's a good cross-country horse and loves his job.”

Fernhill PickPocket, the 8-year-old Irish Sport Horse gelding (Chacco Blue x Bracklin Mystique), owned by Lee Lee Jones, Ann Jones, and Caroline Moran, took the lead in the CCI3*-L with Phillip Dutton in the tack. The pair have won their last three events together all at the CCI3*-S level so are off to a good start to continue their streak as the only pair to crack into the 20s in the class.

“It's a little bit of an emotional relationship because it was actually Lee Lee's horse, and she bought him originally from Ireland. So it's kind of sad, but it's also exciting to have him. Annie Jones and Caroline Moran are also partners with Lee Lee now. We're really excited about his future. He's a little bit of a volatile horse, he's not the most laidback horse you'd ever see and so everybody's in agreement we're going to take our time with him and slowly produce him. He's got the makings of a really top horse. He can move and operate on the flat, but he's also a good jumper as well,” explained Dutton of the horse who was owned by his stepdaughter who suffered a traumatic brain injury.

Dutton and “Ollie’s” score of 28.9 give them just a few time penalties in hand over second place heading into tomorrow’s cross-country. Preview one of the combinations with Dutton here.

“It'll be the longest course he's done, but it should be well within his capabilities at this stage of his career. There's some quite decent proper jumping efforts there and there's also some jumps there that are a bit small compared to some of the course. The course varies a lot,” said Dutton about Clayton Fredericks’ course. “He can be a bit of an aggressive jumper, so I'll just have to make sure that he doesn't get too flat and low at the smaller stuff so that he's at his best for when the harder stuff comes.”

There is a tie for third place on a 33.0 between Jonathan Holling on Prophet, the 7-year-old Trakehner gelding (Tatendrang x Pennant’s Valentine) owned by the rider and Chuck McGrath and Katherine Brown and Carnaby, her own 6-year-old Oldenburg gelding (Cabachon x Clingolda).

In the CCI2*-L William Coleman and Chin Tonic HS have a strong lead on a 24.2. Hyperion Stud’s 7-year-old Holsteiner gelding (Chin Champ x Wildera) won his FEI debut at Great Meadow earlier this summer so is looking to keep his winning record unblemished. 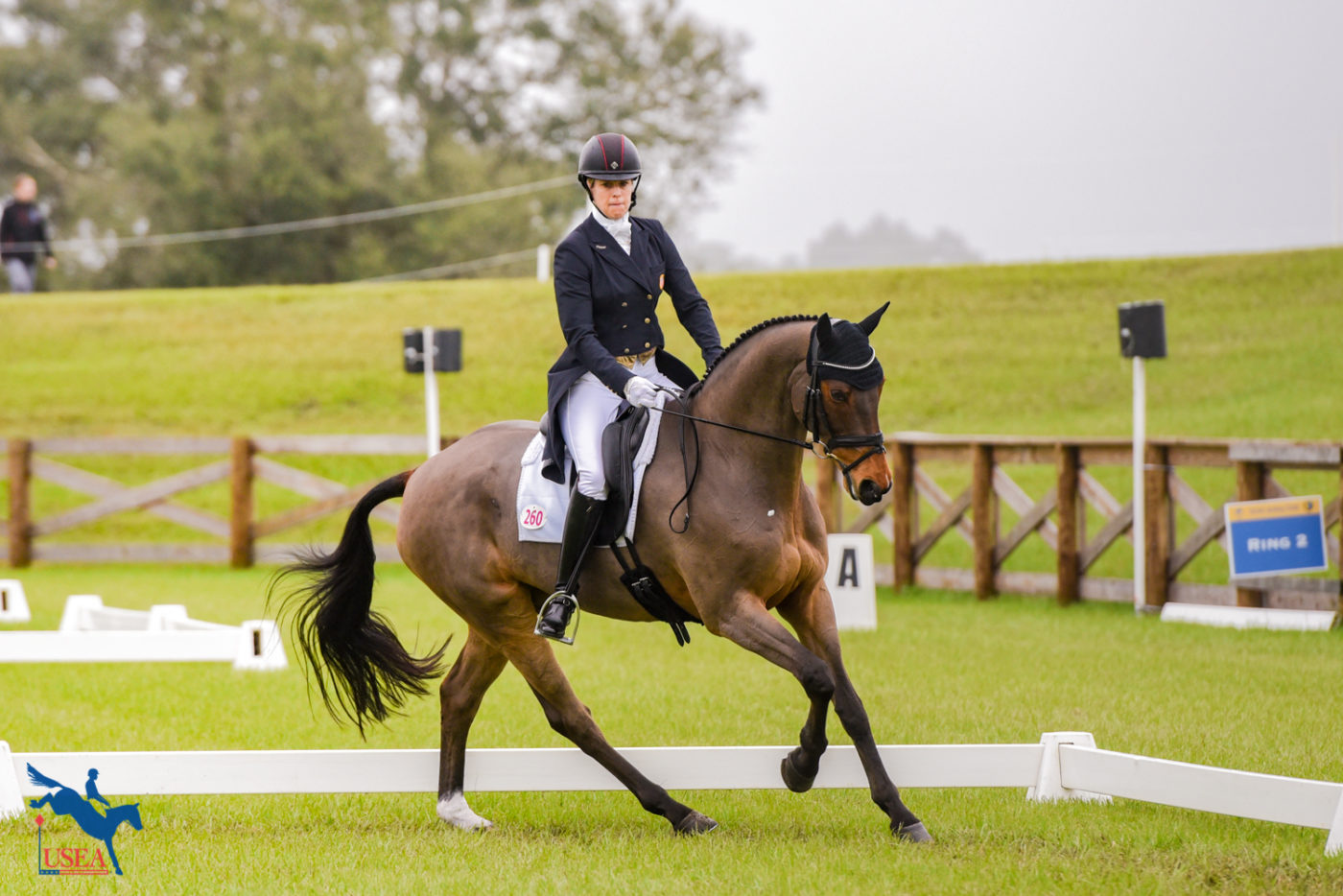 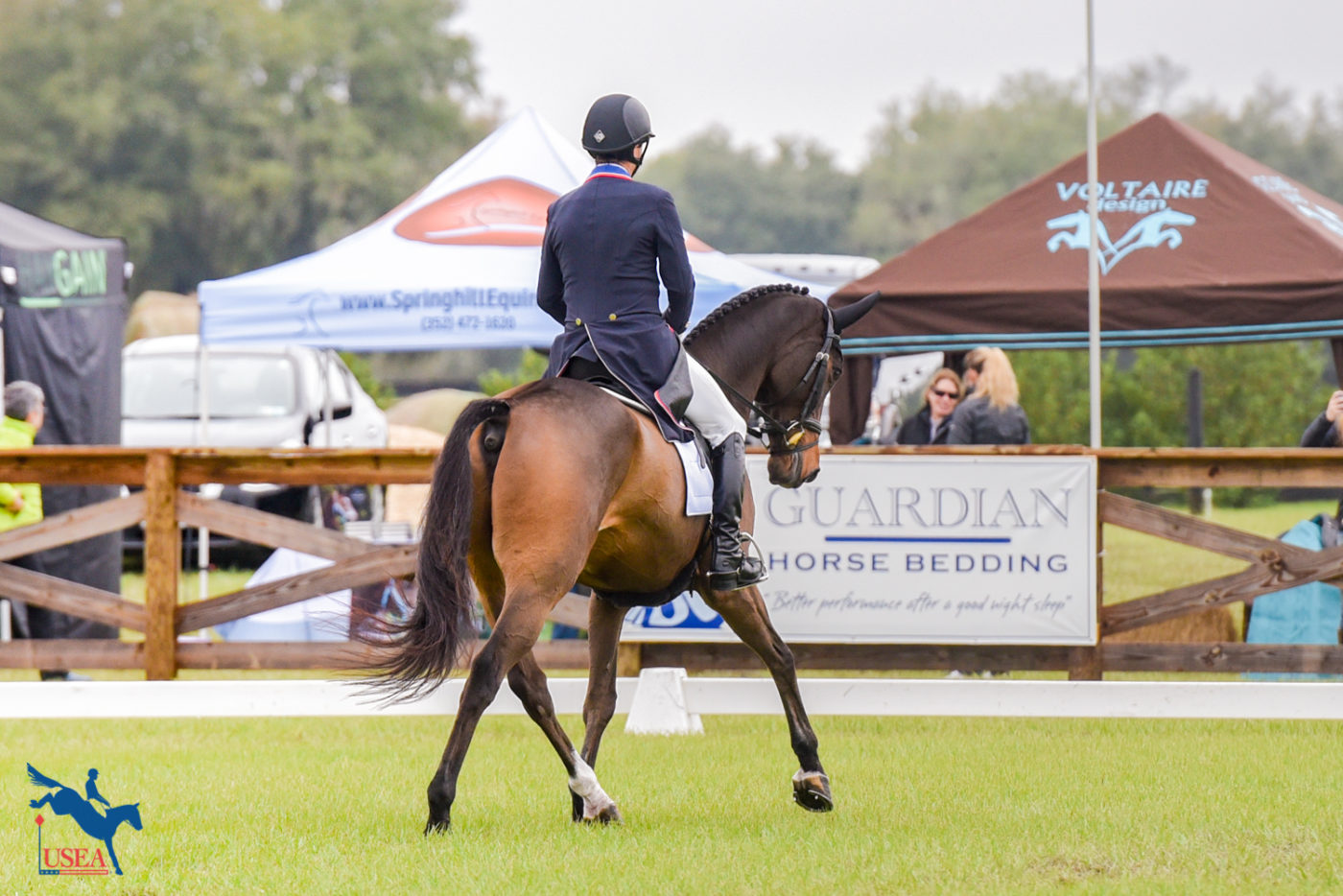 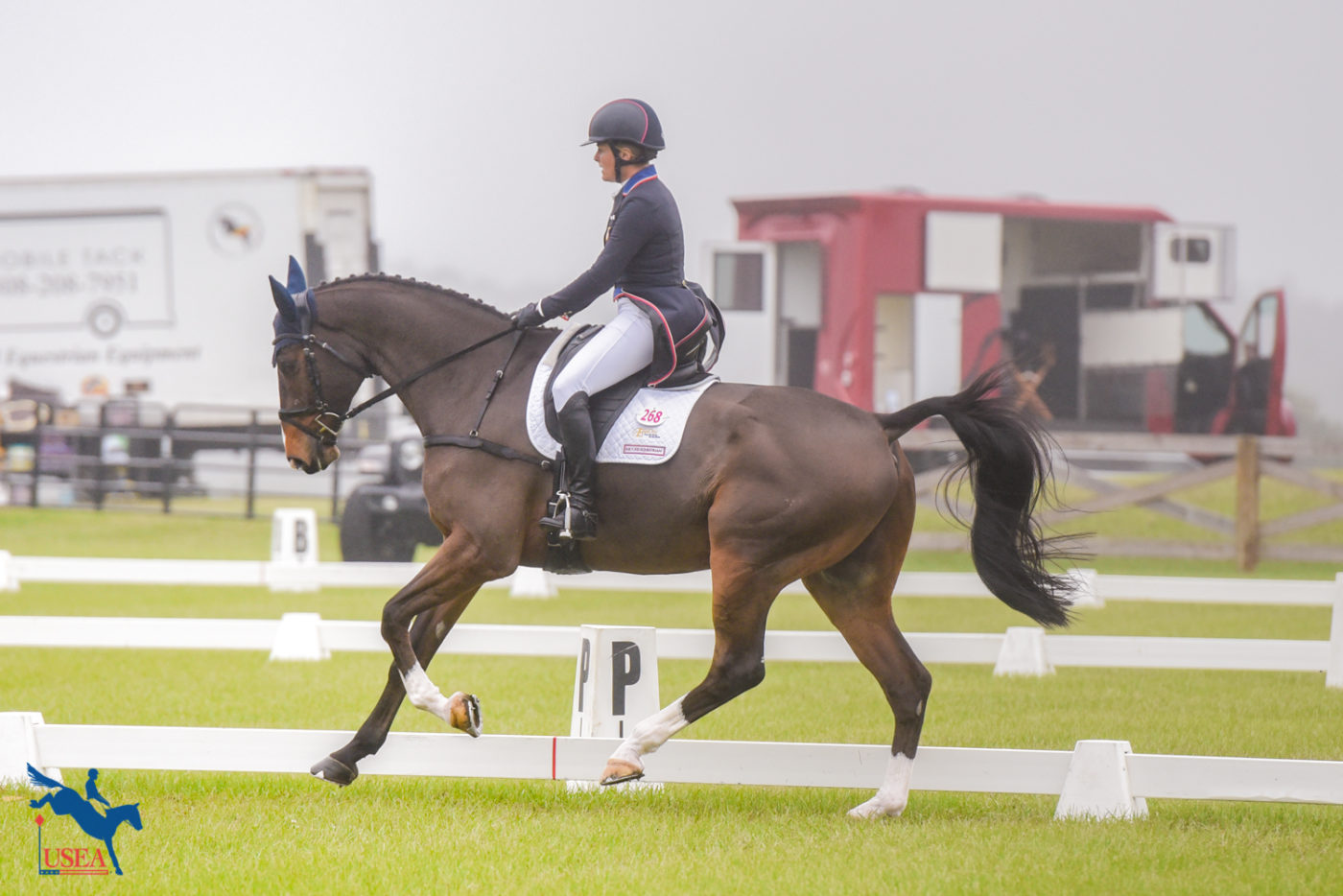 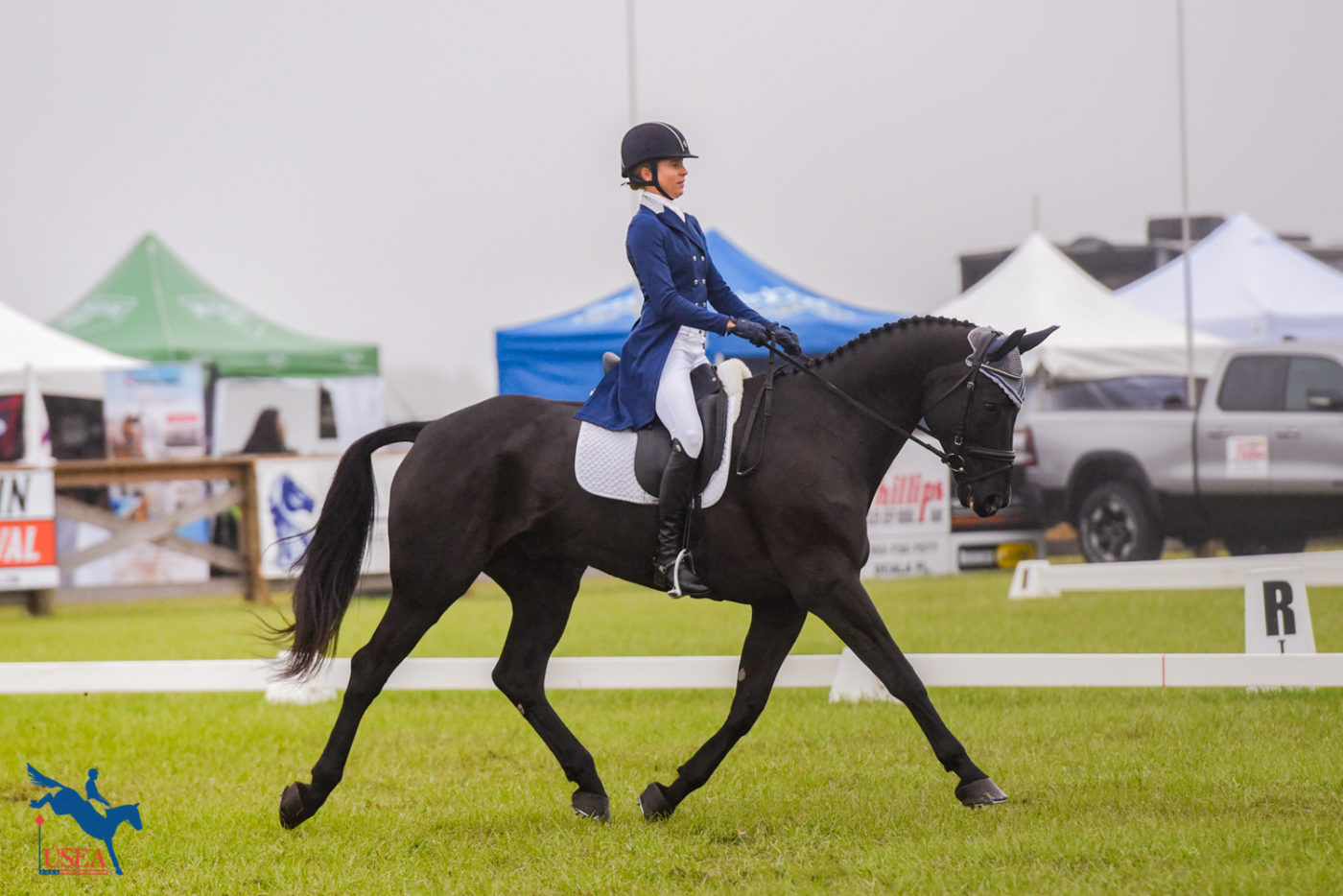 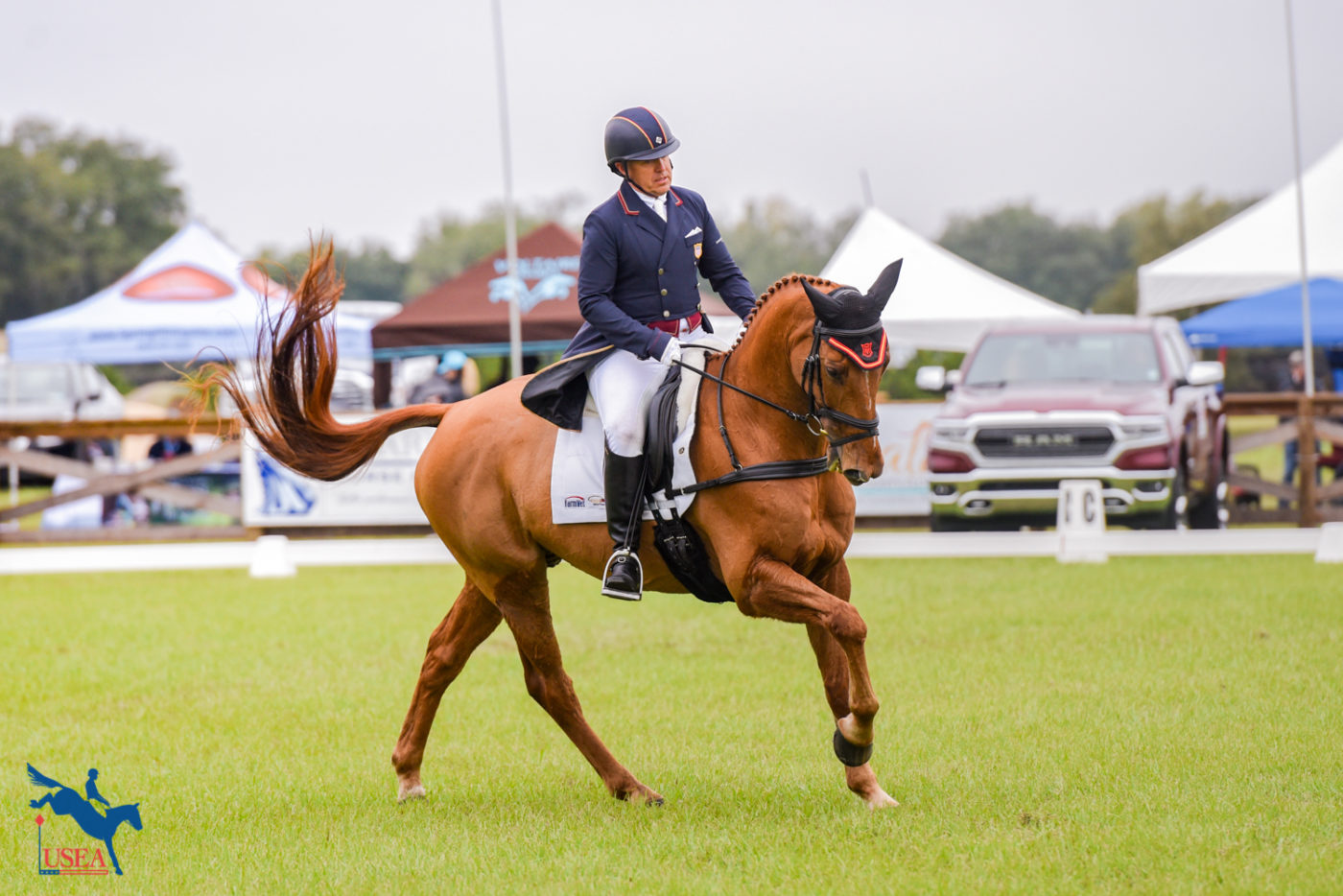 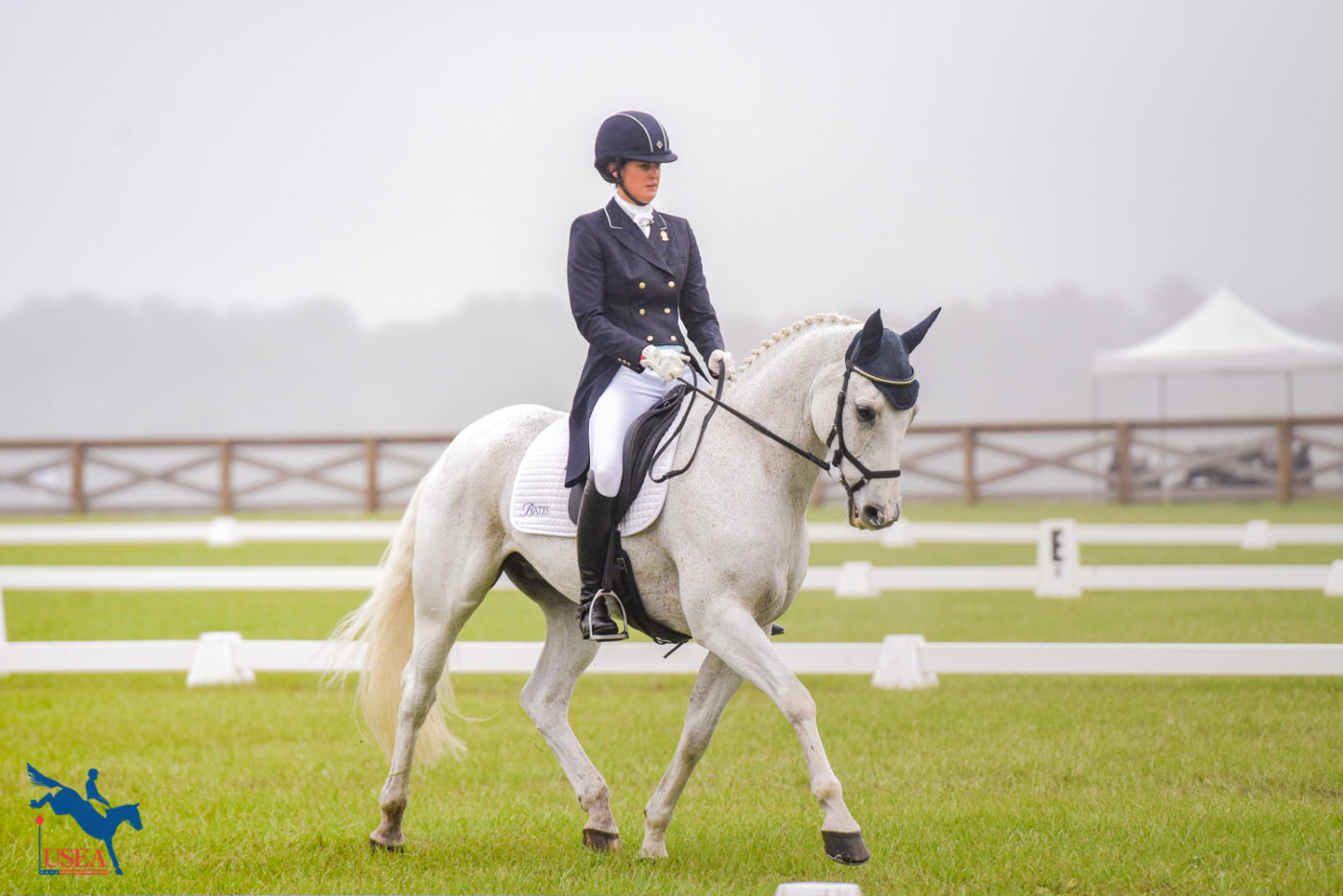 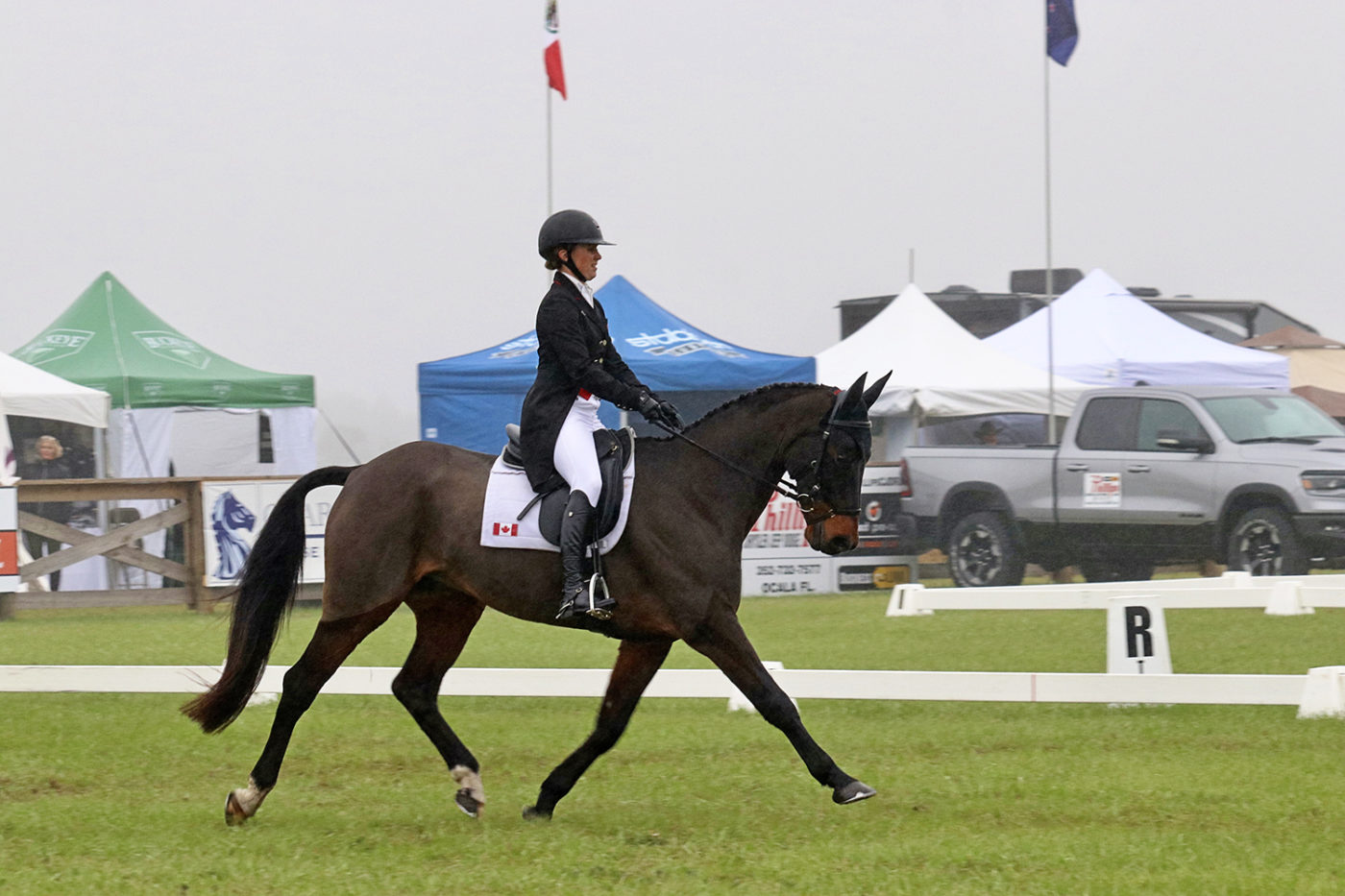 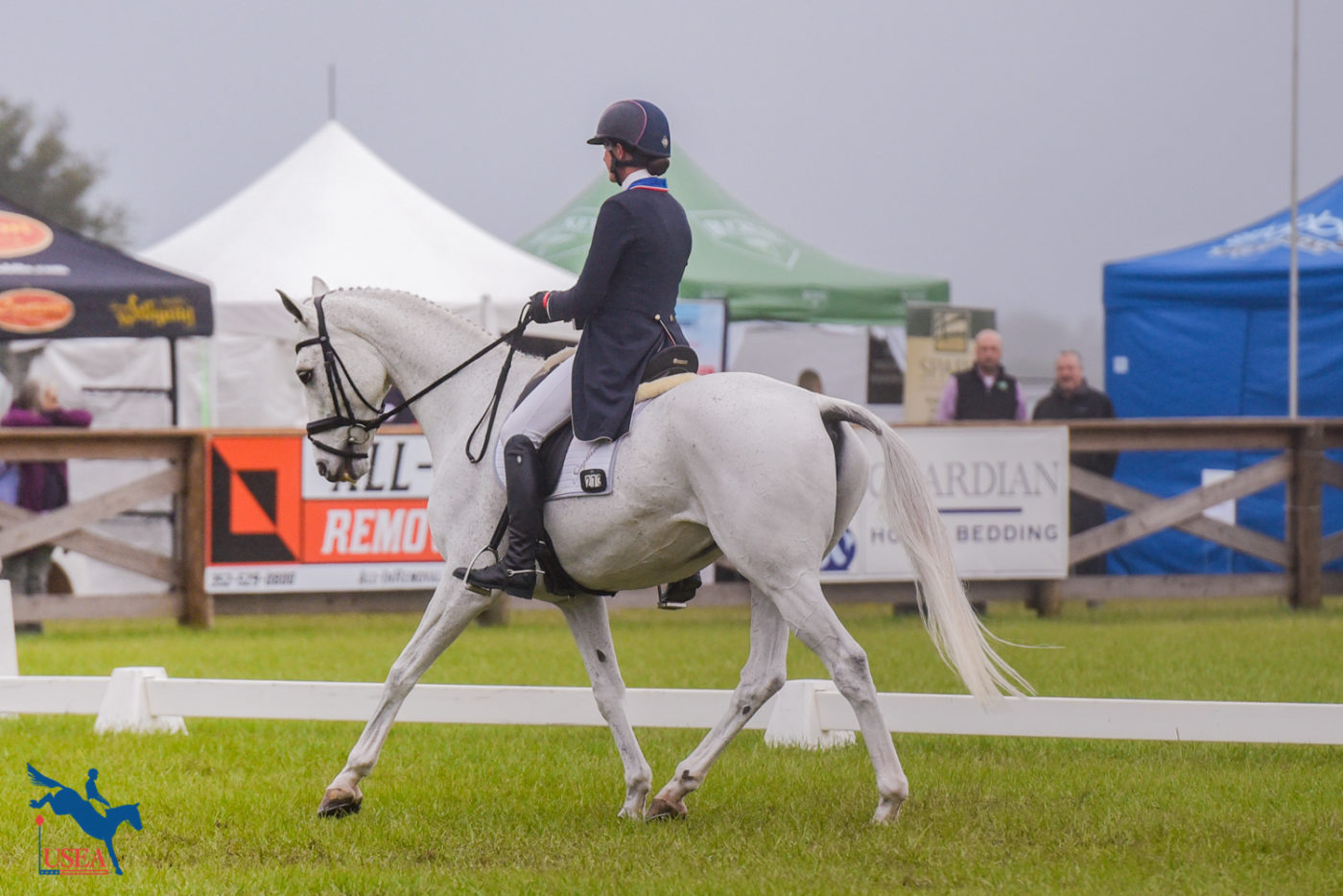 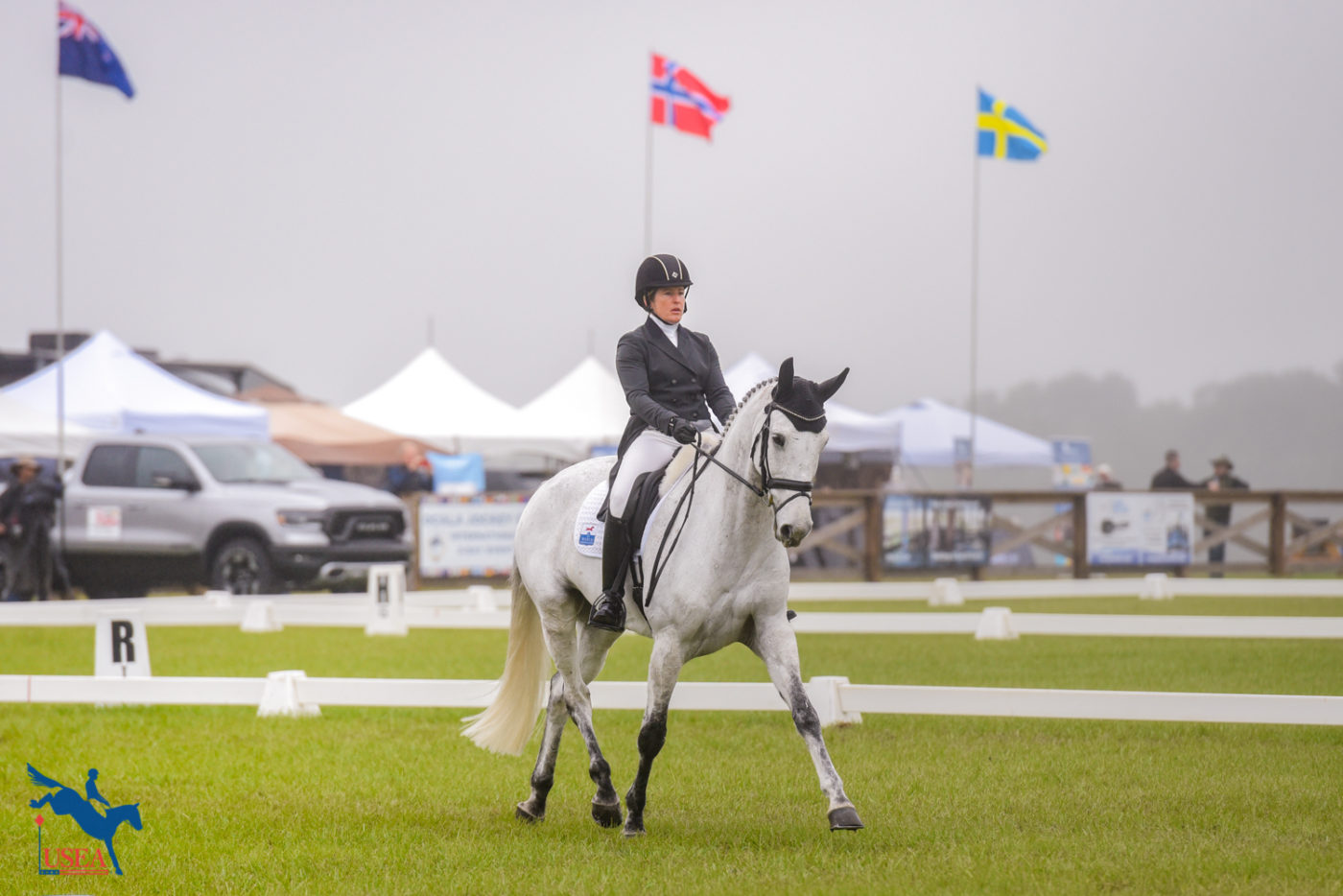