Area Two Trots into the Lead in the CICOY2* at NAYC

The 2018 Adequan/FEI North American Youth Championships (NAYC) may be at the two-star level for riders under 21, but Area II brought a quartet of impressive three- and four-star horses to take on the CICOY2*. The four riders have developed solid relationships with their partners and rose to the occasion to lead the field of three teams and 19 individual riders after dressage on a 97.9. The combined team of Areas I/IV/VIII is close behind on a collective score of 101.8 and Area VI rounds out the three teams on a joint score of 113.2 heading into the cross-country phase on Saturday.

Tayler Stewart and her own 15-year-old Westphalian gelding, Ideal Contini (Contini x Riviera Wonder) lead the way for Area II on a 31.2 and sit in individual second place. “I was really thrilled with our test especially after I saw the score,” said Stewart with a smile. “I never know quite what I’m going to get going into the ring. I can either get a good, or a not so good score, but I prepared the best I could for this test. Coming into [the NAYC], I wanted to be as confident as I could, and he was really steady and game for his test, so I’m really proud of him.”

"I have one of the longest relationships with [Ideal Contini] that he’s ever had. He was in a professional program up until I got him, and we’ve built such a trusting relationship, that when I make a mistake he helps me out. He was meant to be a young rider horse. He really loves it.”

Area II was out in full force to support its teammates. USEA/Leslie Mintz Photo.

Cambalda (Balda Beau x Cathy’s Lady) earned a 32.6 for Area II with Alexa Lapp in the saddle, and the pair sits in individual third place. The 16-year-old Irish Sport Horse gelding’s owners Tim and Nina Gardner are at Rebecca Farm cheering on Cambalda and Lapp, and Lapp said that she thinks “Tim and Nina are the bomb!” Lapp explained that while the Area II team may have some heavy hitters with all three- and four-star horses, it’s no walk in the park. “We all face a lot of pressure by having really accomplished horses on our team, but I love all the girls on the 1-star and 2-star team. Everyone’s cheering each other on.”

Stewart added, “we have some great horses, but we have a great group behind us. These aren’t easy horses to ride, so it’s nice having a strong support system to get us through.”

“A lot of people think that since the horses have done four-stars they’re easy to ride, but they’re actually really hard,” explained Olivia Dutton, who is riding the syndicate owned Mr. Medicott. “These horses have so much experience and they teach us so well. I’m having a lot of fun learning from Cave.” Dutton rode a consistent test with Mr. Medicott, earning a 34.1 for Area II, and sit in sixth place individually. “It’s taken me a bit to learn what buttons to push, but he really listened to me today. I thought he was going to be really strong, but he came back to me and I was happy. He was perfect.”

Ryan Keefe and Flintstar round out the Area II team, scoring a respective 35.4. Flintstar (Zabalu x Croftlea Firequeen), Rumsey Keefe’s 18-year-old Thoroughbred gelding represented New Zealand at the 2012 London Olympic games in addition to completing Burghley CCI4* twice. Keefe joked that “it’s not a secret dressage isn’t his favorite or strongest phase, but he was actually really good today. He kept it together and I felt like I could ride through the motions. It was a little nerve-wracking going first for the team, but I was really happy to be back at the barn afterwards and relax.”

It’s certainly not the worst to go first. Area VIII’s Alexandra Baugh took one for the team and trotted down the center line as the first competitor of the day, and the judges were undoubtedly impressed with the 2017 NAYC CH-J* individual silver medal pair. Ballingowan Pizazz (OBOS Quality x Rocklea), Altorac Farm’s 16-year-old Irish Sport Horse gelding had an smooth test with Baugh in the irons, scoring a 30.8 which remained the best score of the day to sit in individual first place heading into the next phase. “Mango was absolutely perfect,” said Baugh who is riding for the combined team of I/IV/VIII. “It was definitely one of our best tests to date. It’s been a bit of a challenge for us, and I’ve had him for two years now. We’ve finally gotten to know each other more and we’ve figured it out. He was really great today.” 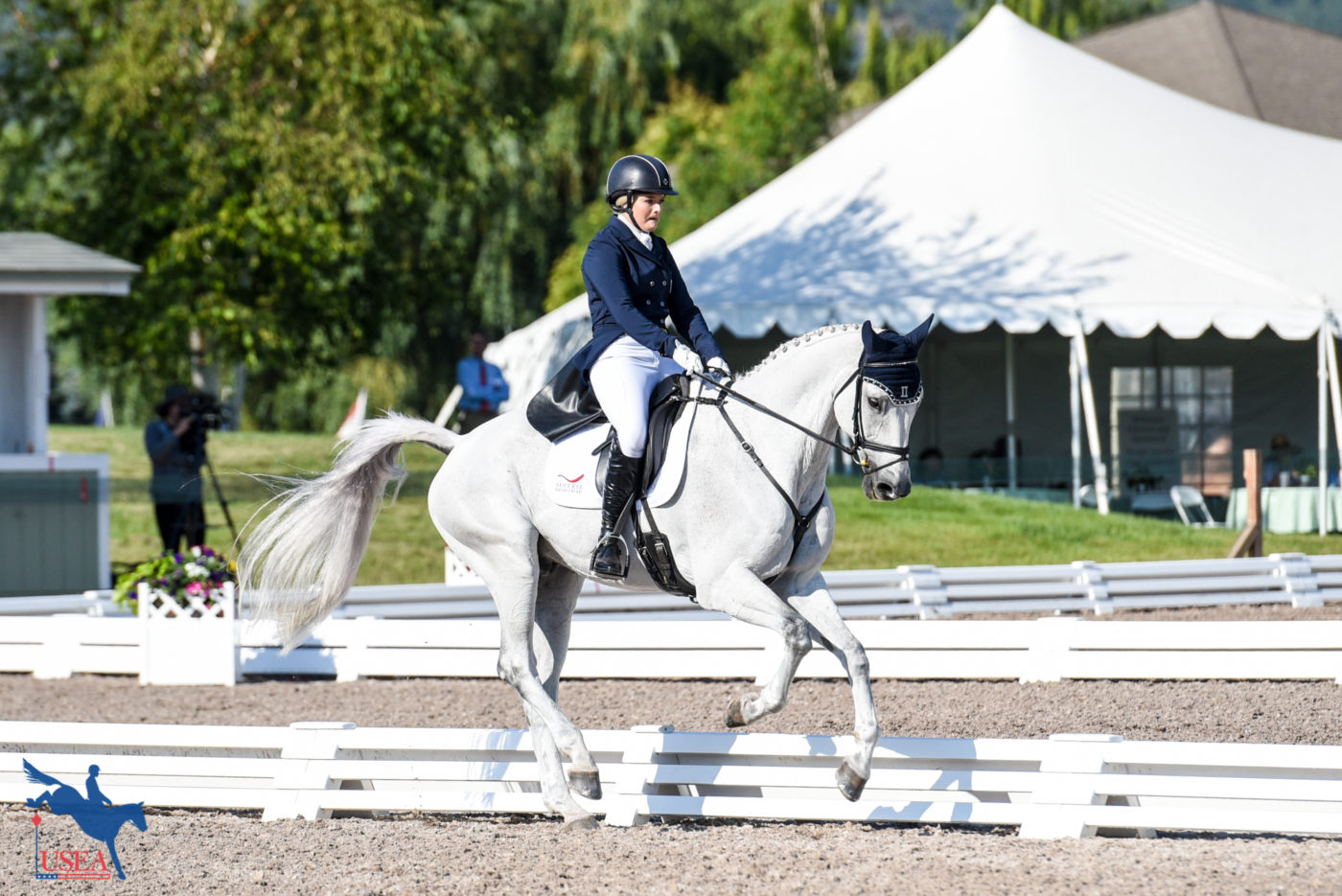 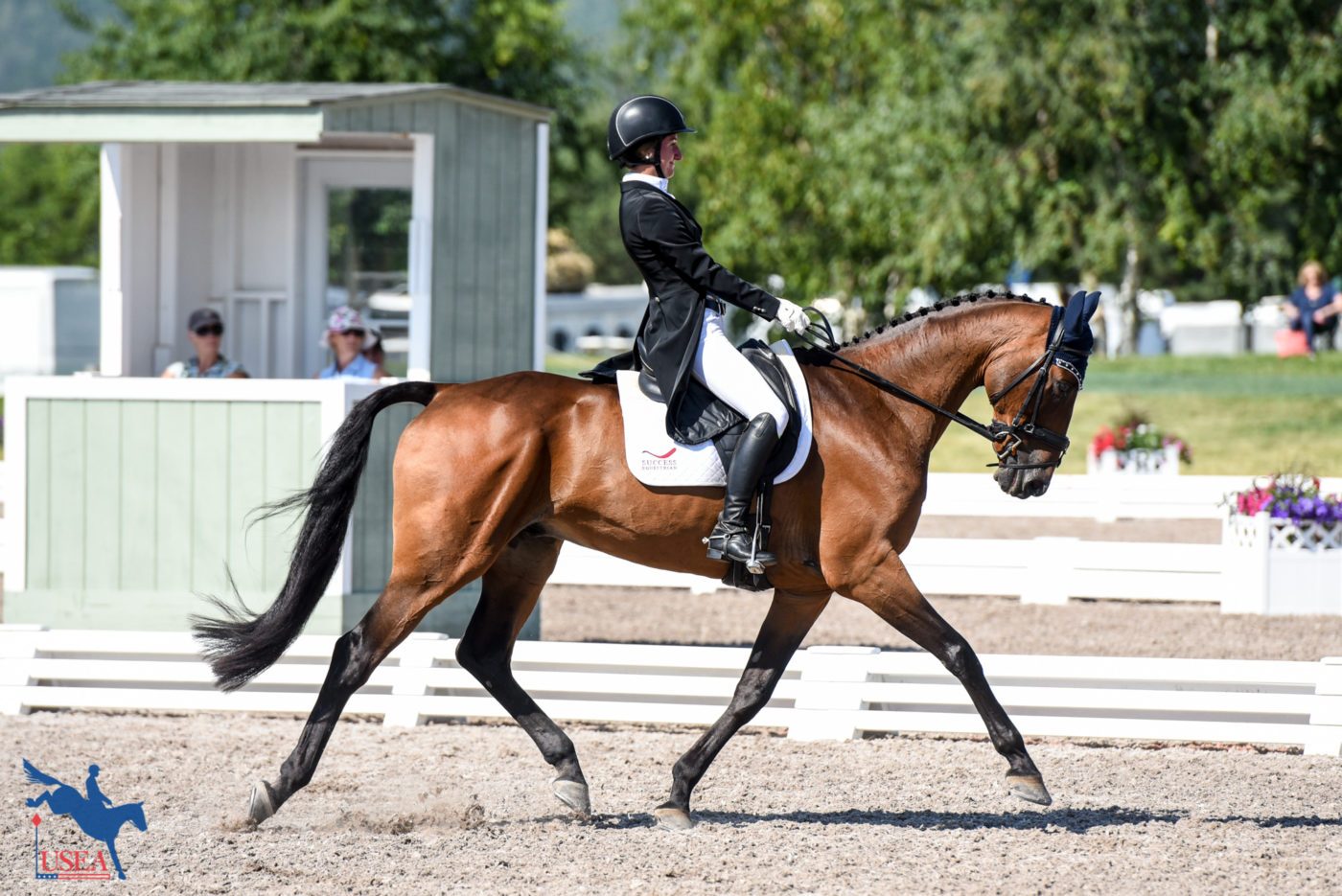 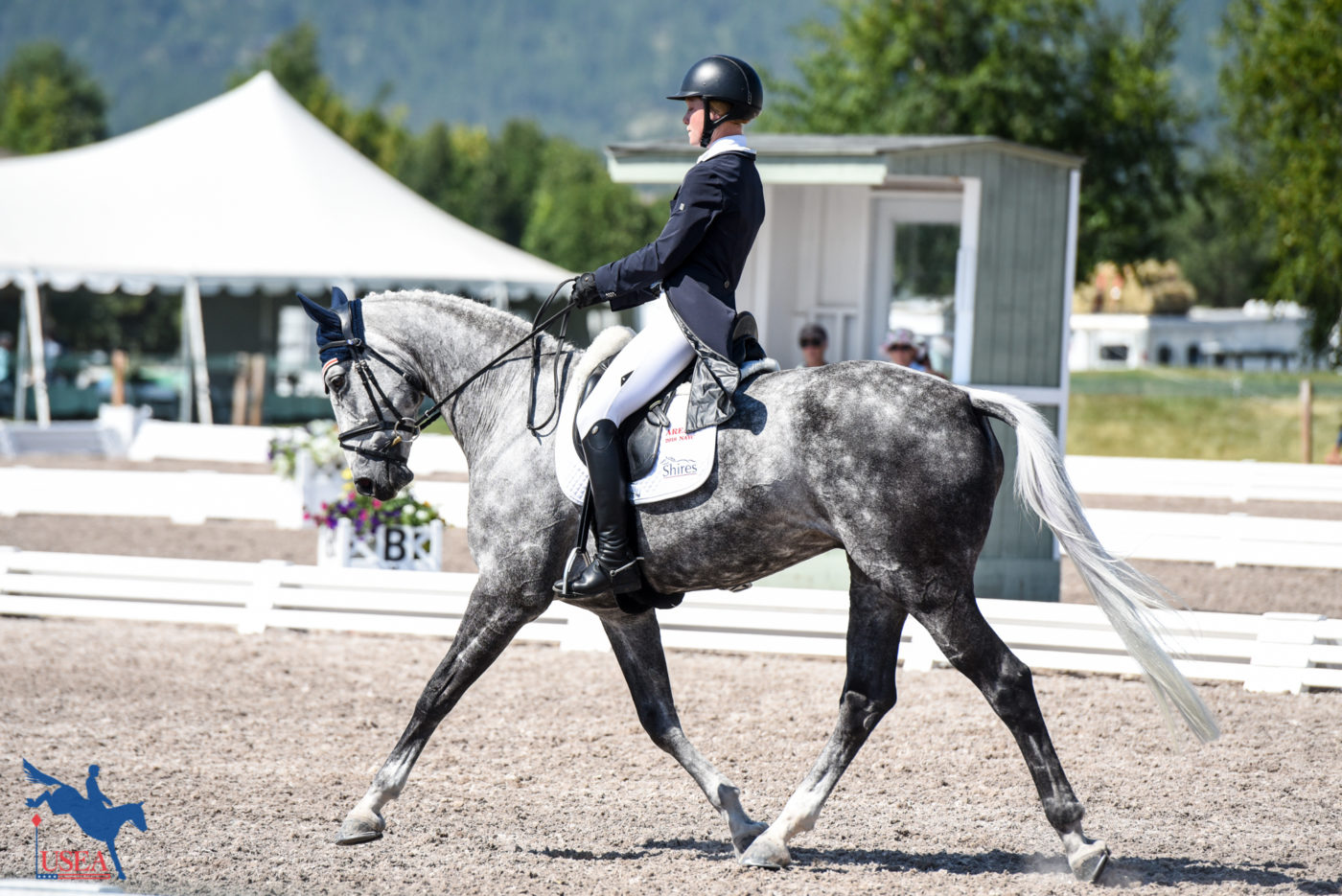 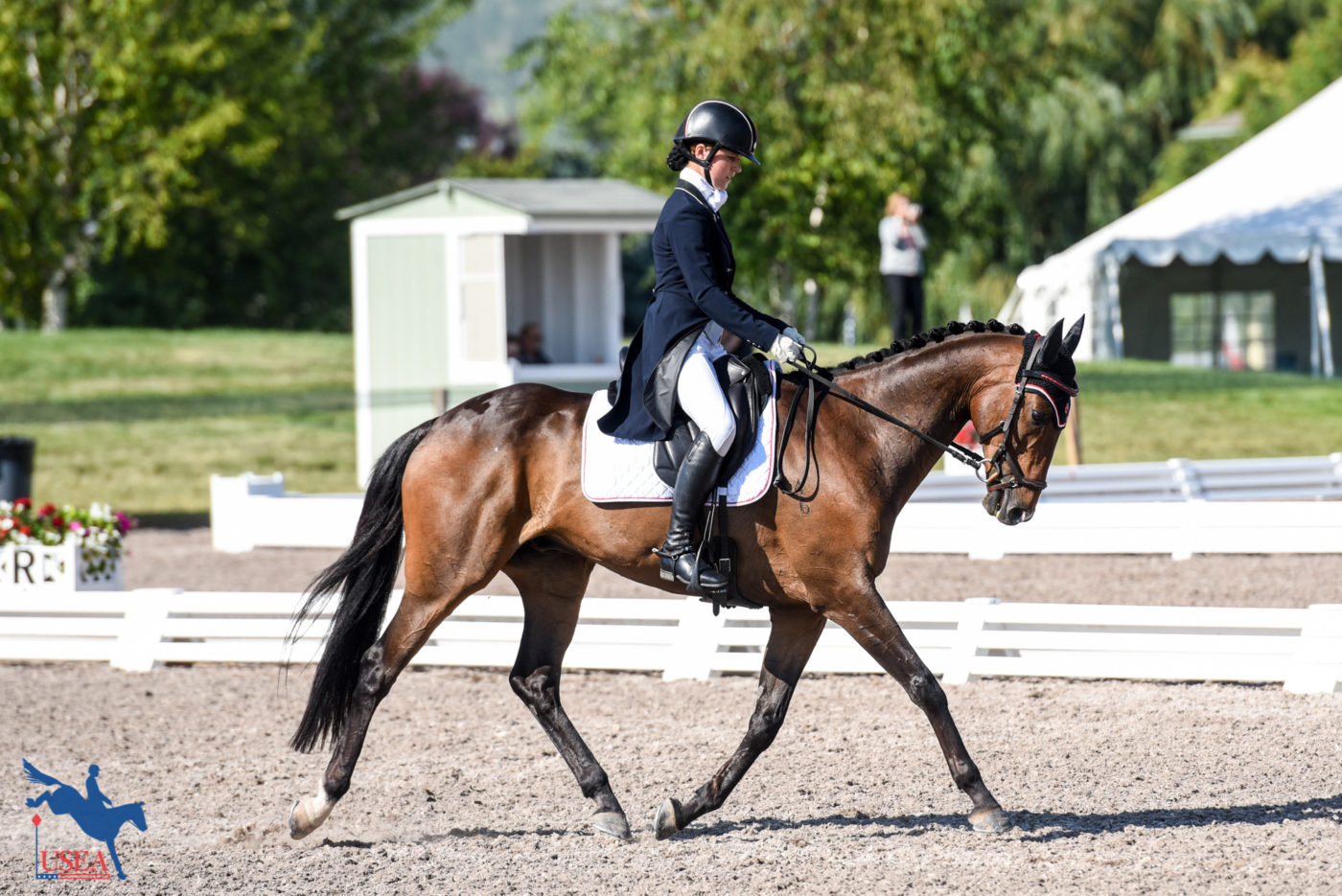 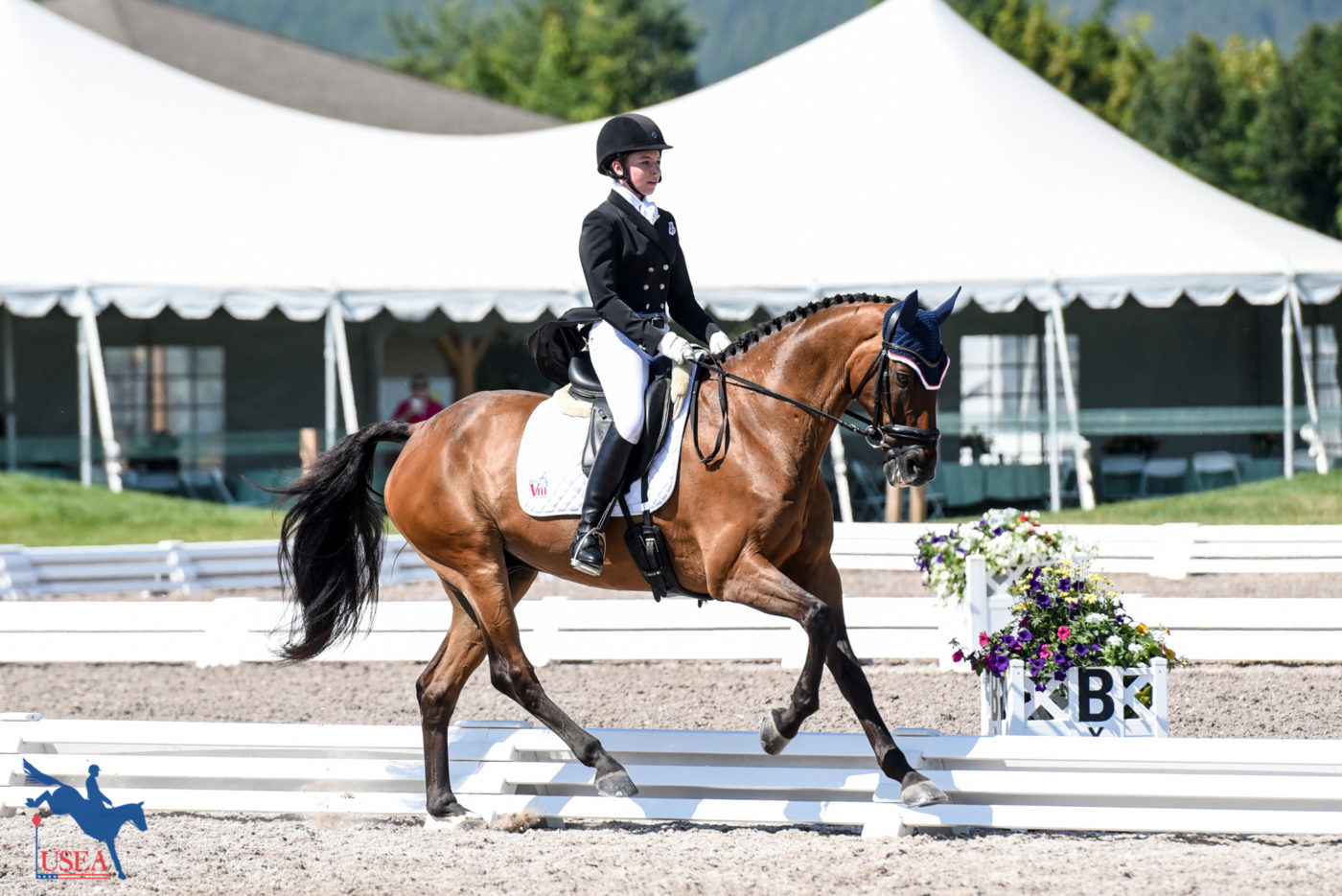 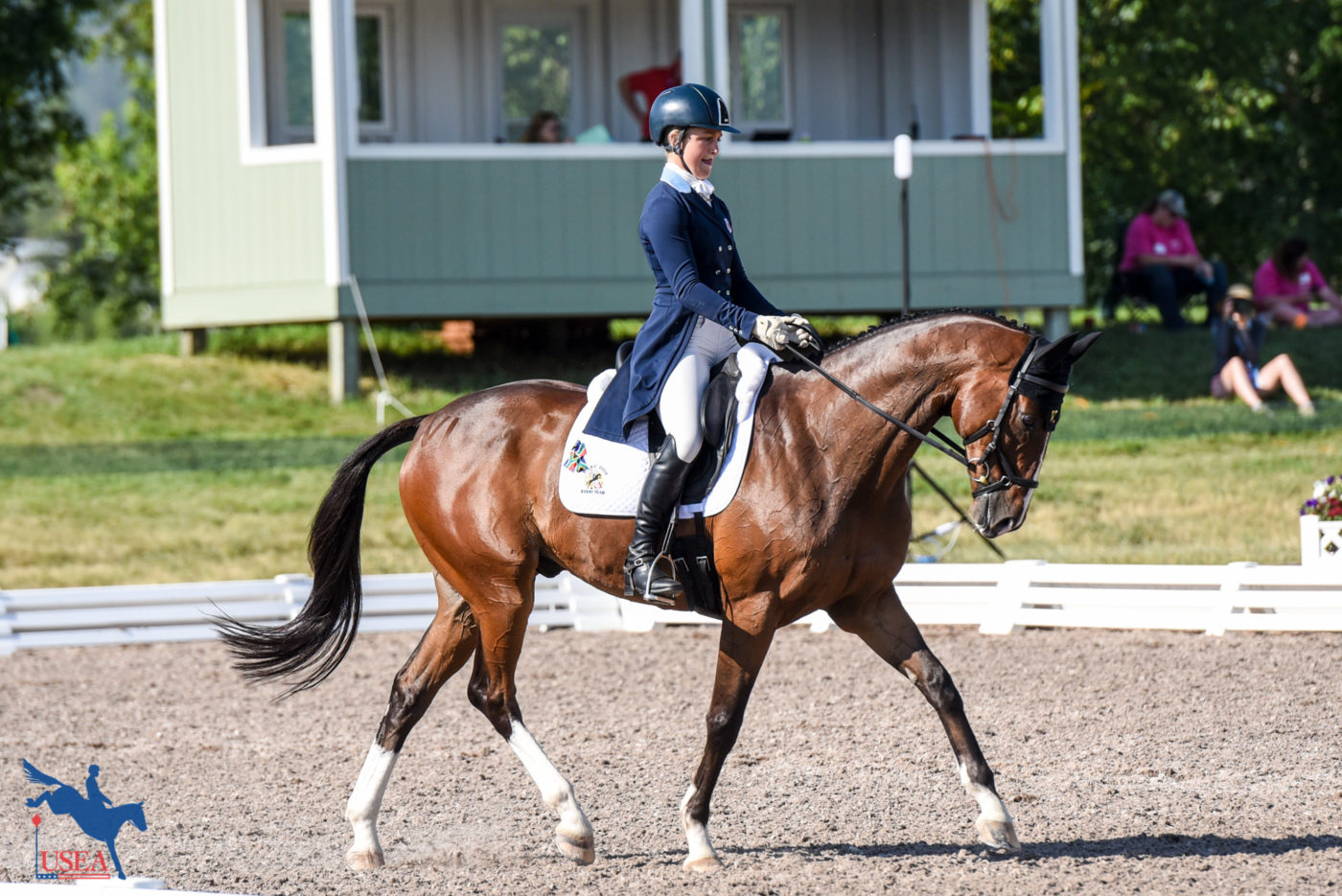 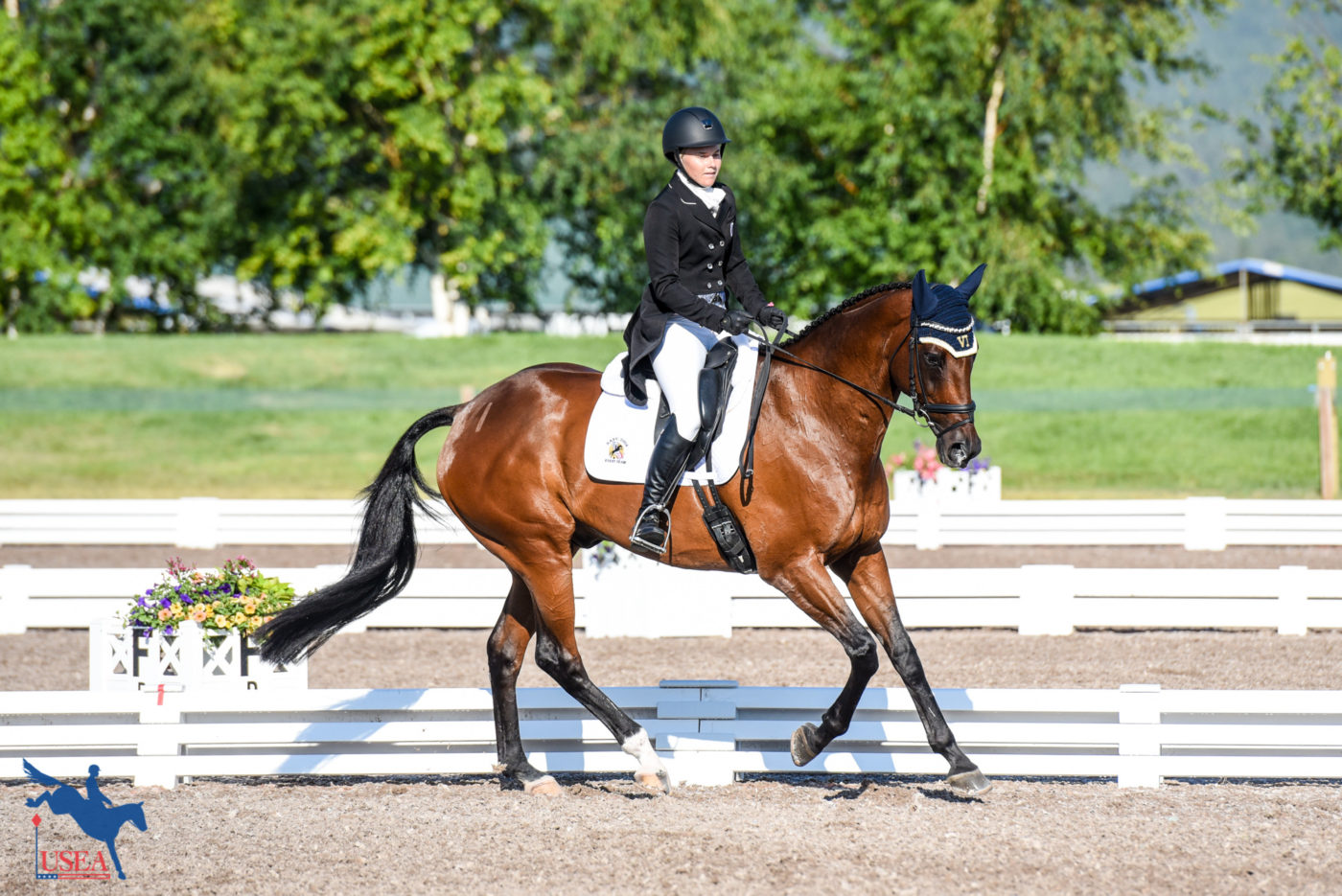 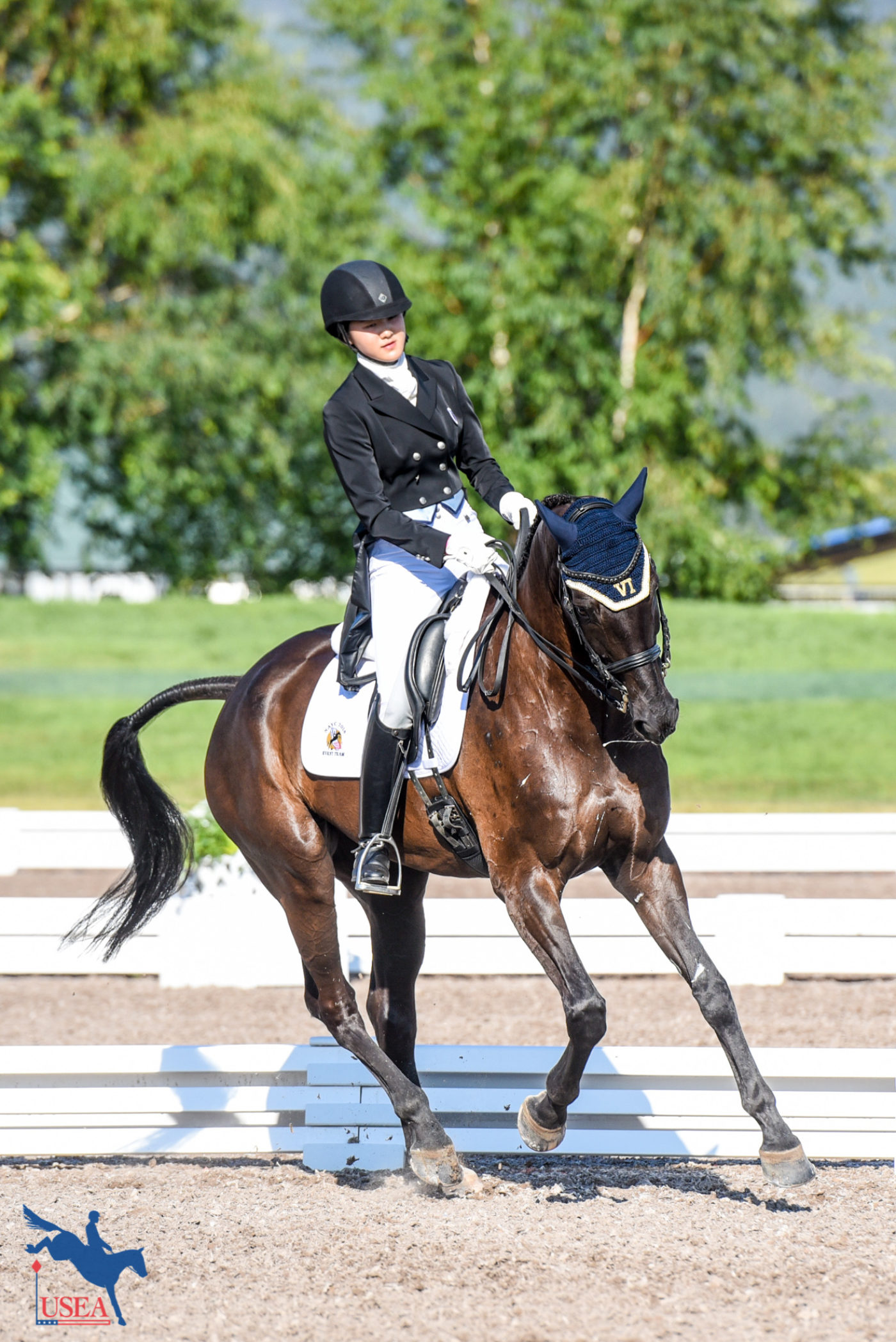 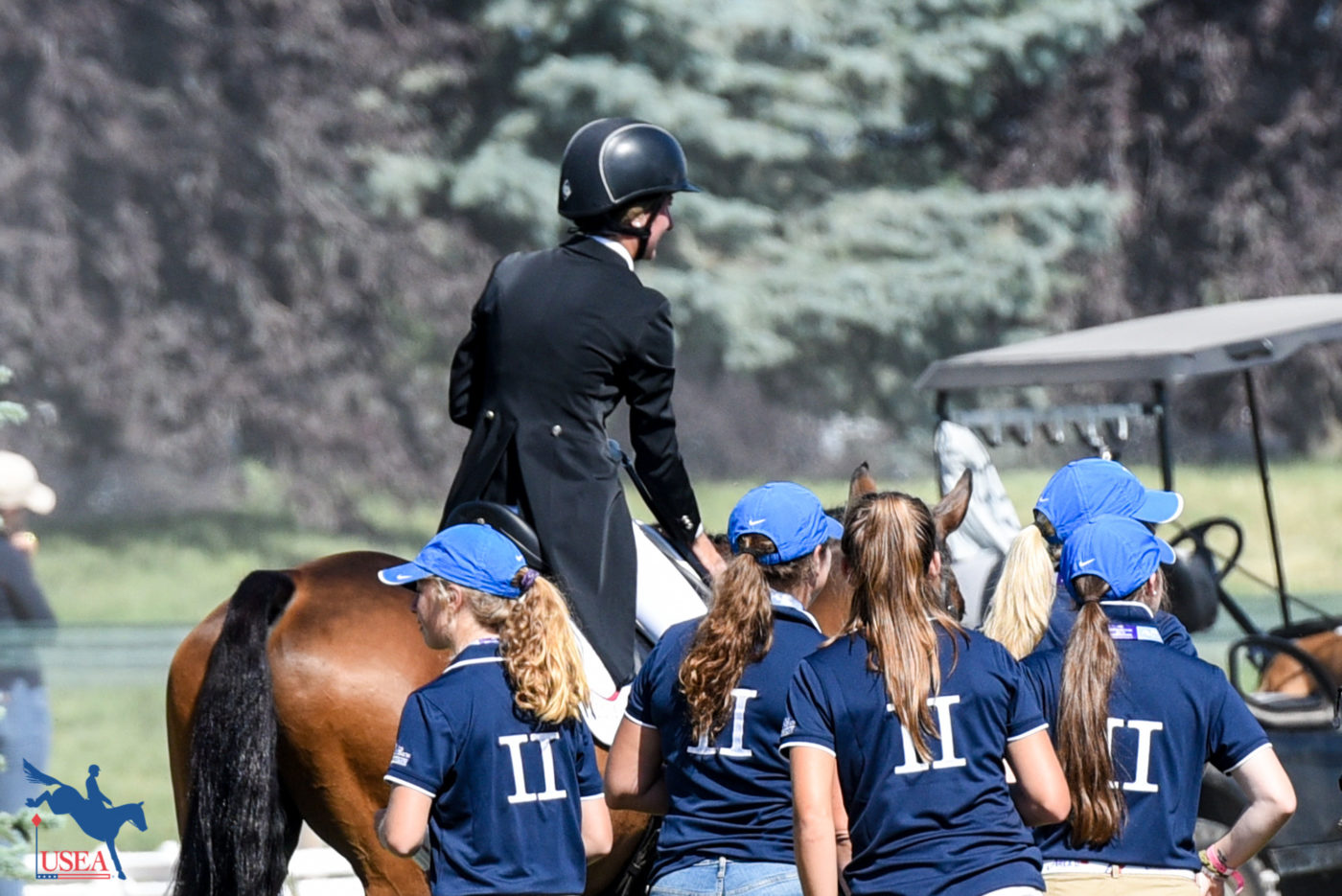 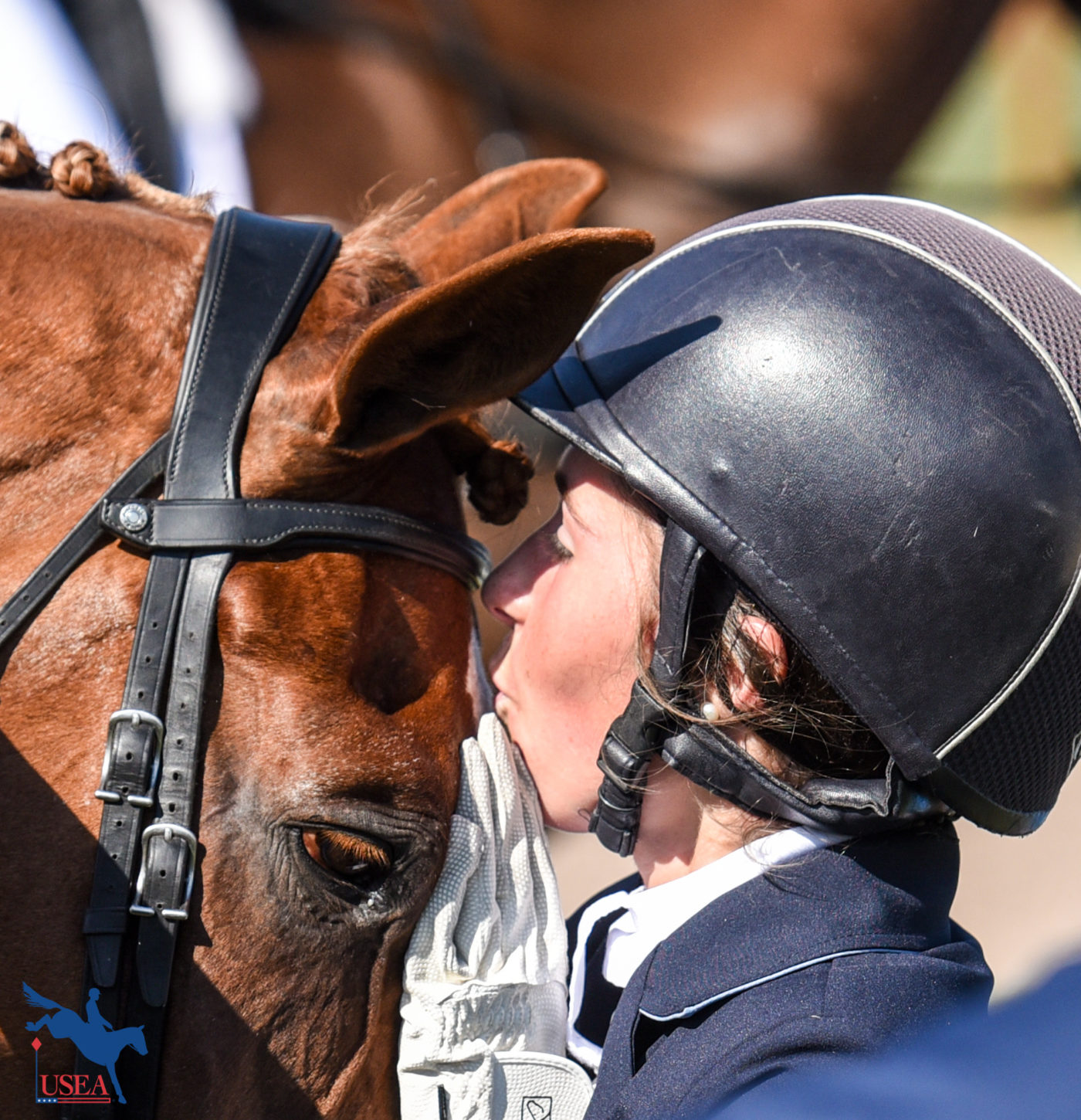