Wise Lolita Linda (Caraminal Del Jaral x Kwin Wise Christine), an Anglo-Arab/Belgian Warmblood filly owned and bred by Ronald Zabala-Goetschel, stole the show in the 3-year-old Overall and Filly divisions on a combined score of 82.9, just 0.2 points ahead of the Overall Reserve Champion.

Zabala-Goetschel revealed that “Lolita” gets her name from a Marc Anthony song. “It’s a phrase he has in one of his songs,” he explained. “Lolita Linda is a song about love – he loves this girl called Lolita, so he calls her ‘Lolita Linda’ which means ‘beautiful Lolita.’”

“She’s very special because her dam is the full sister of my life-changing horse, Wiseguy, who we cloned – we have three clones of Wiseguy. So, her dam is a full sister, and we bred her to this stallion that I bought who was the 3-year-old Champion in Spain in eventing. He is by a French stallion and out of a French mare . . . we were lucky that she came out with good things from the sire and good things from the dam.”

Zabala-Goetschel knew she was going to be something when she literally hit the ground running, right from birth. “From the moment she was born, the first day out of the stall, she was so fast. We have bred for many years and we have never had a colt or filly who was that fast on the first day.” In fact, Lolita’s first time in the jump chute was the Thursday before the Championships. You wouldn’t have known that based on her performance in the jump chute today, where she scored the highest individual score for scope/ability – an 8.9.

Next, Lolita will have a bit of a holiday and will come back into the barn at the beginning of her 4-year-old year to be started. “I start late with my horses. I am not a commercial breeder so I don’t start riding them until they’re four – I break them when they’re turning four and I go slowly with them. I don’t rush them – I want them to grow stronger physically and mentally and I’m not going to rush because if you go slow by the time they are 10 or 11 they’re doing the upper levels and I think that’s a perfect age.”

Manley competed “Indy’s” mother up through the Preliminary level before she was sidelined by an injury and Manley made the decision to breed her to Riverman. “I don’t have much on her background, but she’s got a lot of heart,” Manley said of Indy’s dam. “She would do anything for me and I wanted a piece of her for me.”

“I really wanted a bay filly, so I got the exact opposite,” she continued, gesturing at the 17 hand grey gelding, “and I would not trade him for the world.”

“He came out huge,” she described. “I had to pull him out myself, so we had a bond right away. He was six week’s overdue – he was 3’7” when he stood up, so I called him my Preliminary jump. He had legs everywhere and this tiny little body and I just spent as much time as I could with him and started doing things right away so we went for walks and I ponied him off his mother and he’s done cross-country in-hand.”

Indy recently went for his first cross-country schooling under saddle, where he conquered banks, ditches, and water with ease. “I think it’s because we’ve done so much on the ground and have such a good partnership.” Manley said they’ll head for Aiken this winter and look to complete their first recognized event in the spring.

Championship judge Peter Gray praised the work of Carolyn Mackintosh and her team of volunteers for putting on a fantastic Championships. “What we’re looking for in the committee is a real destination venue to host Championships to make them feel extra special and I think we hit the jackpot here,” he said. “Its so beautiful and Carolyn did such a great job manicuring the rings and putting out flowers and with the awards area. We’re very grateful to the organizers and fans of the FEH who put on such an effort.”

Stay tuned to find out how the yearling and 2-year-old East Coast Championships play out tomorrow, starting at 8:30 a.m. 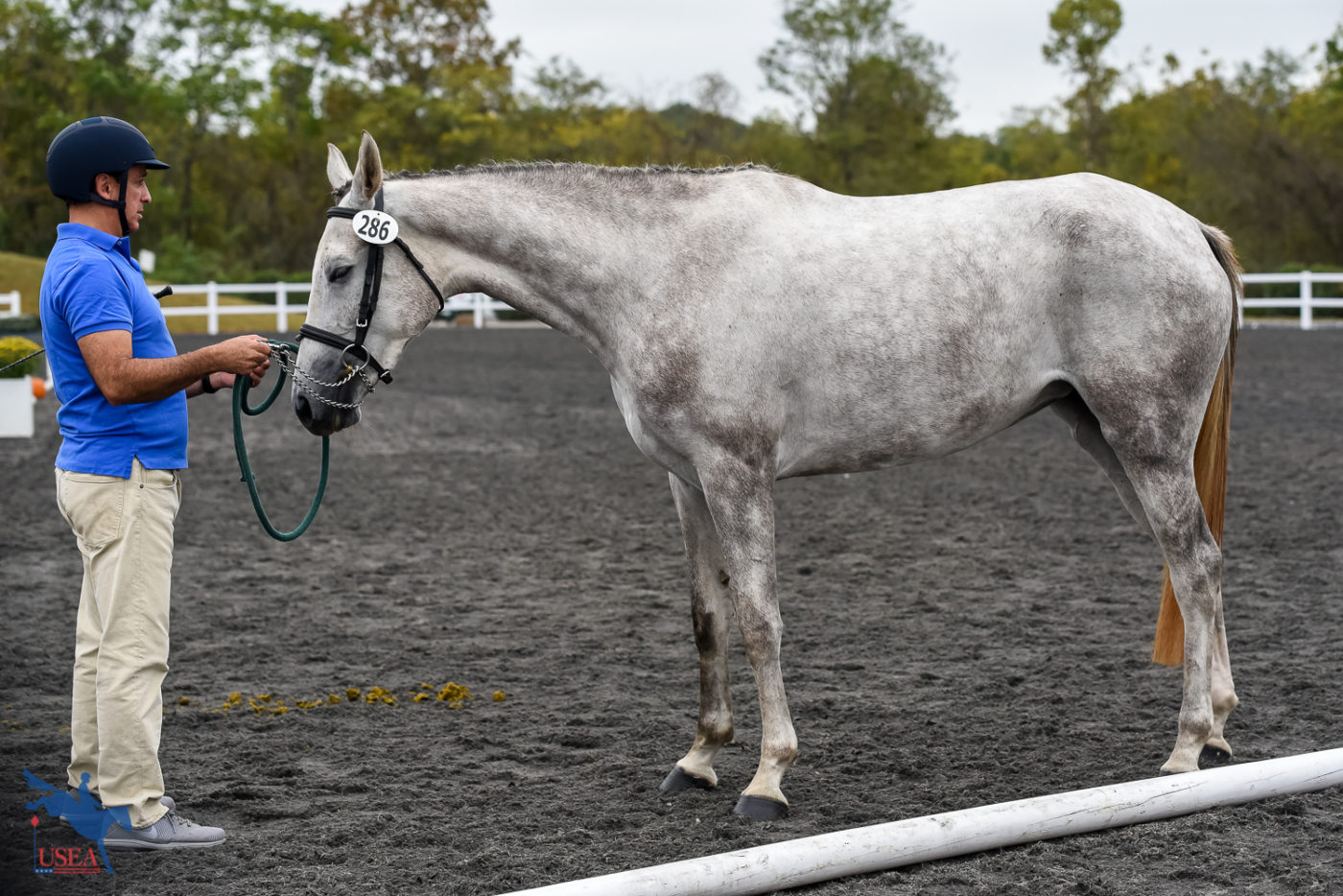 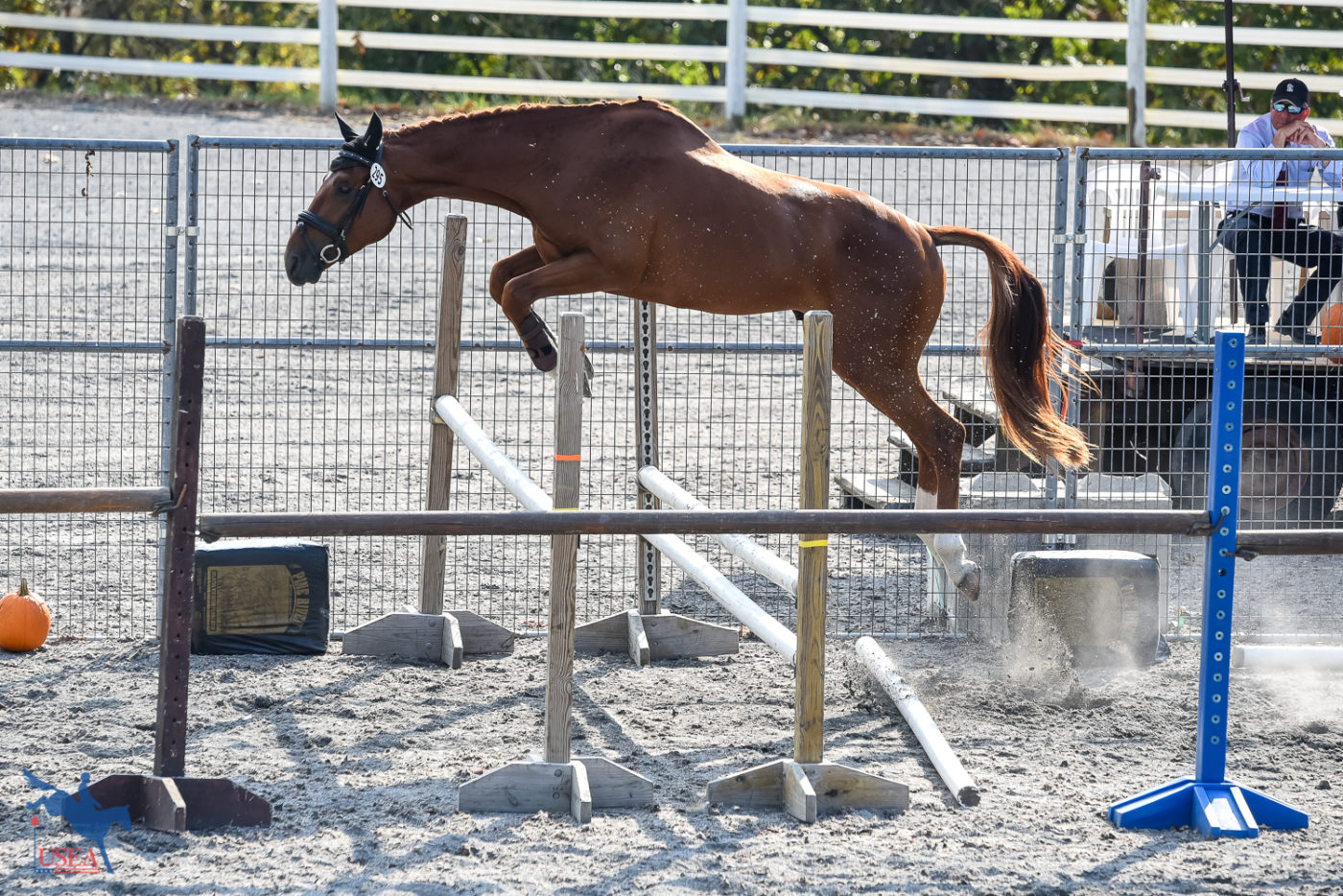 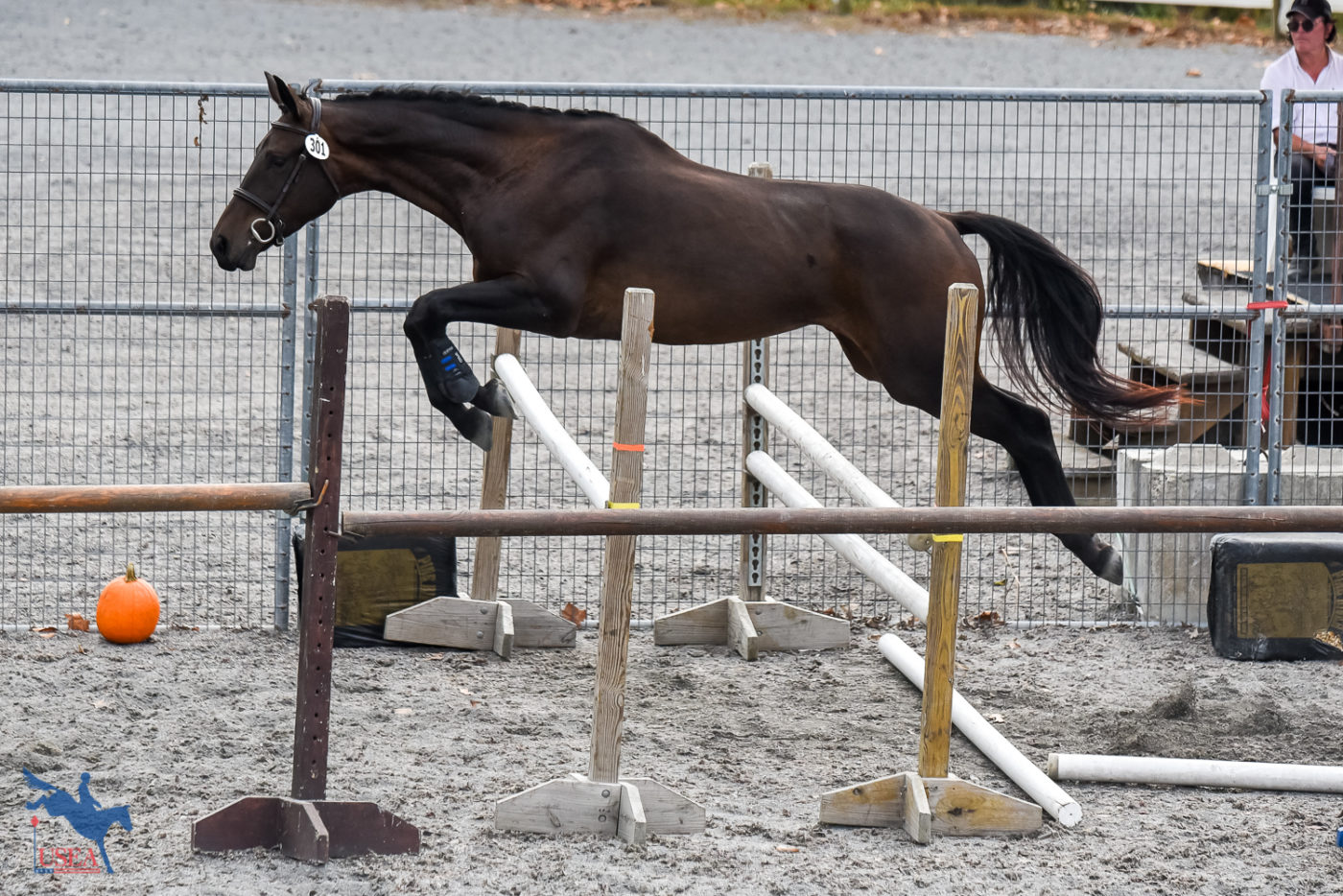 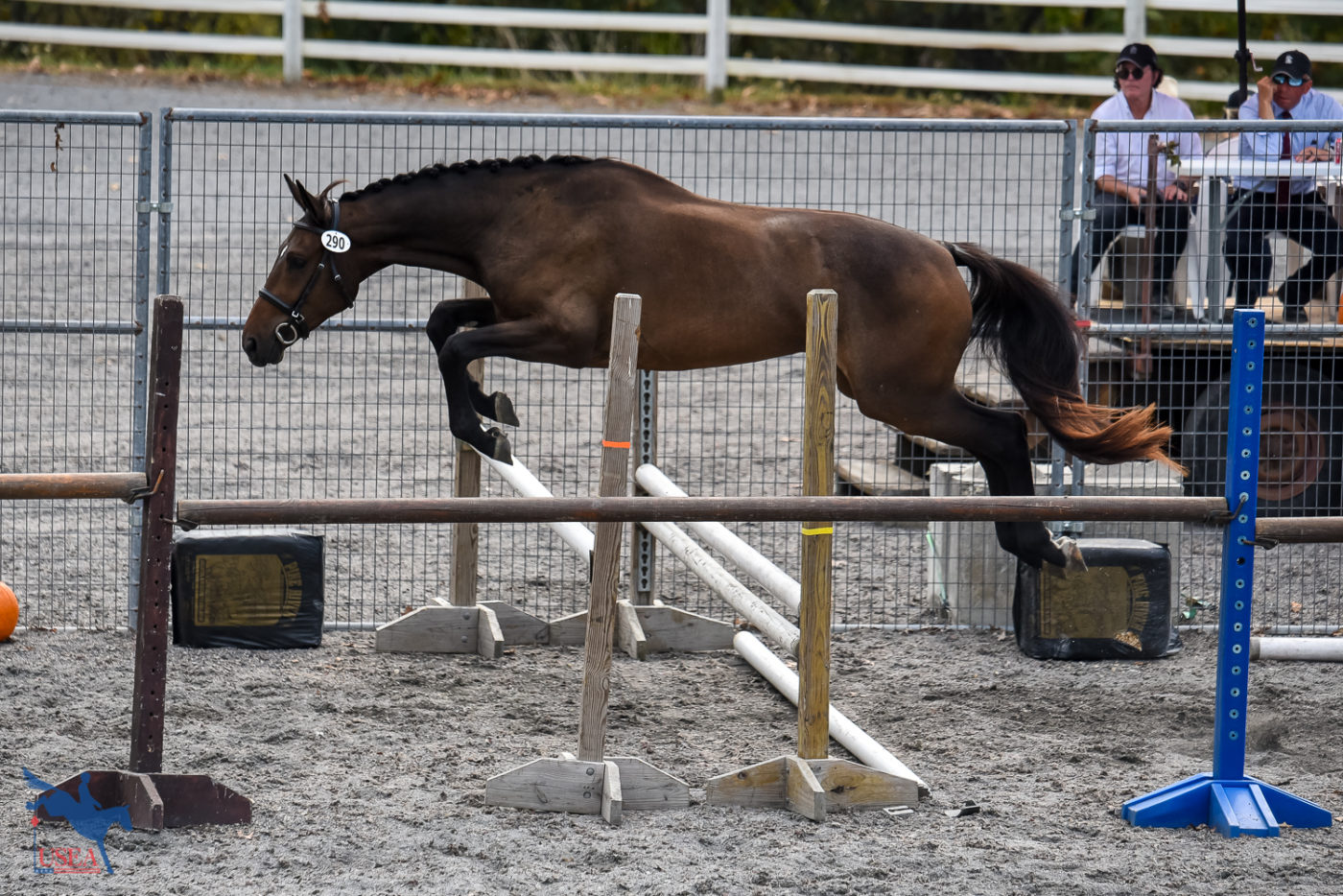 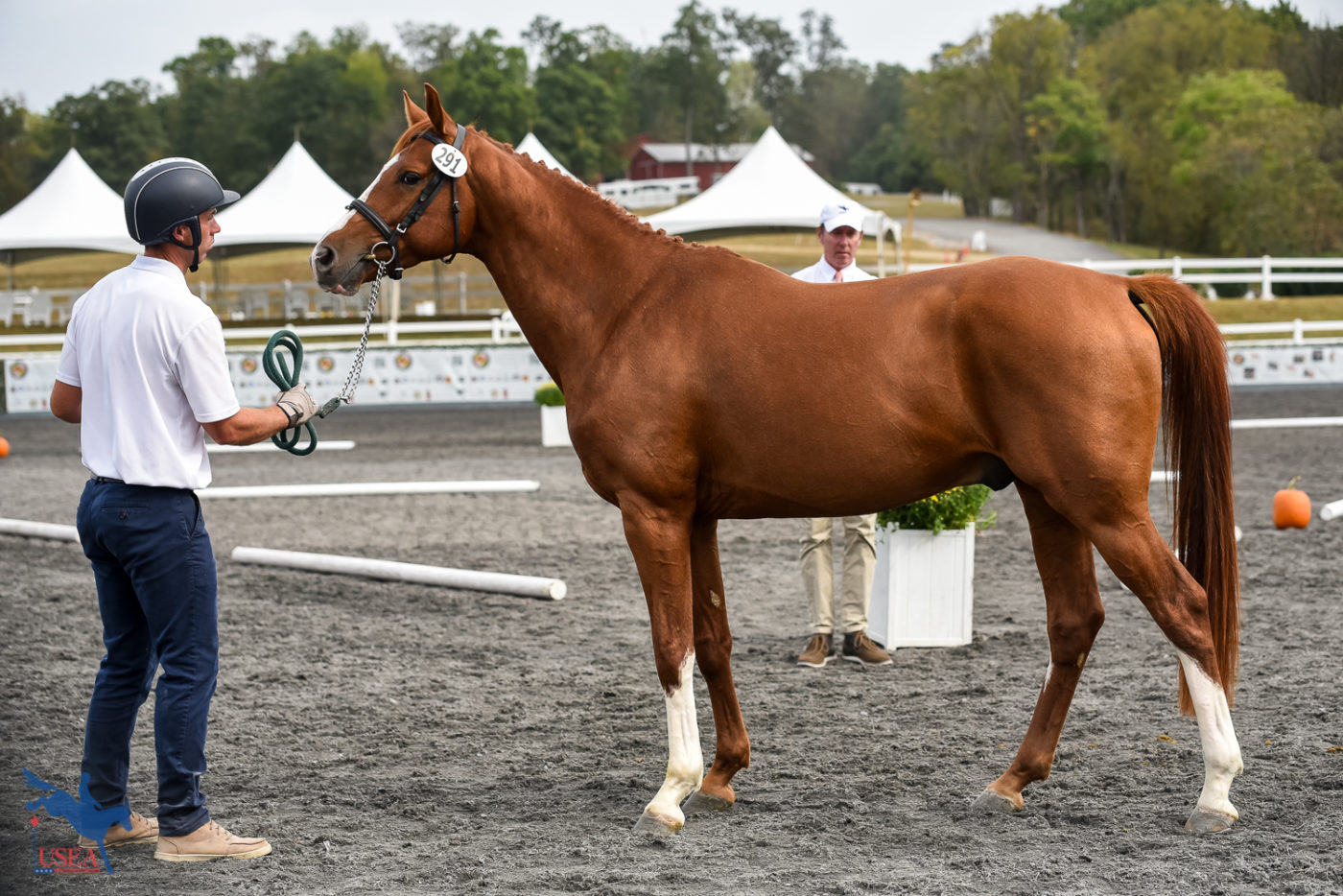 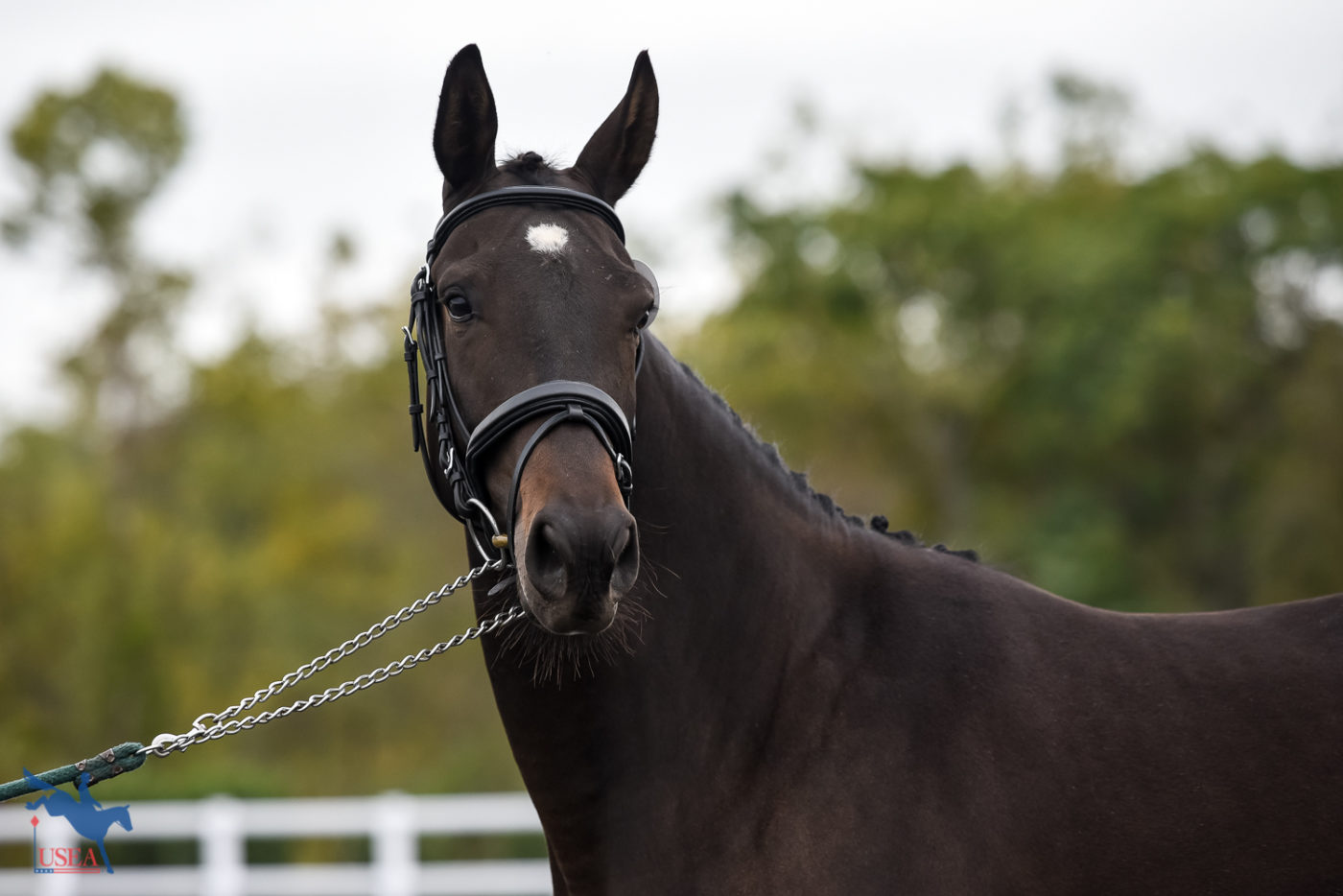 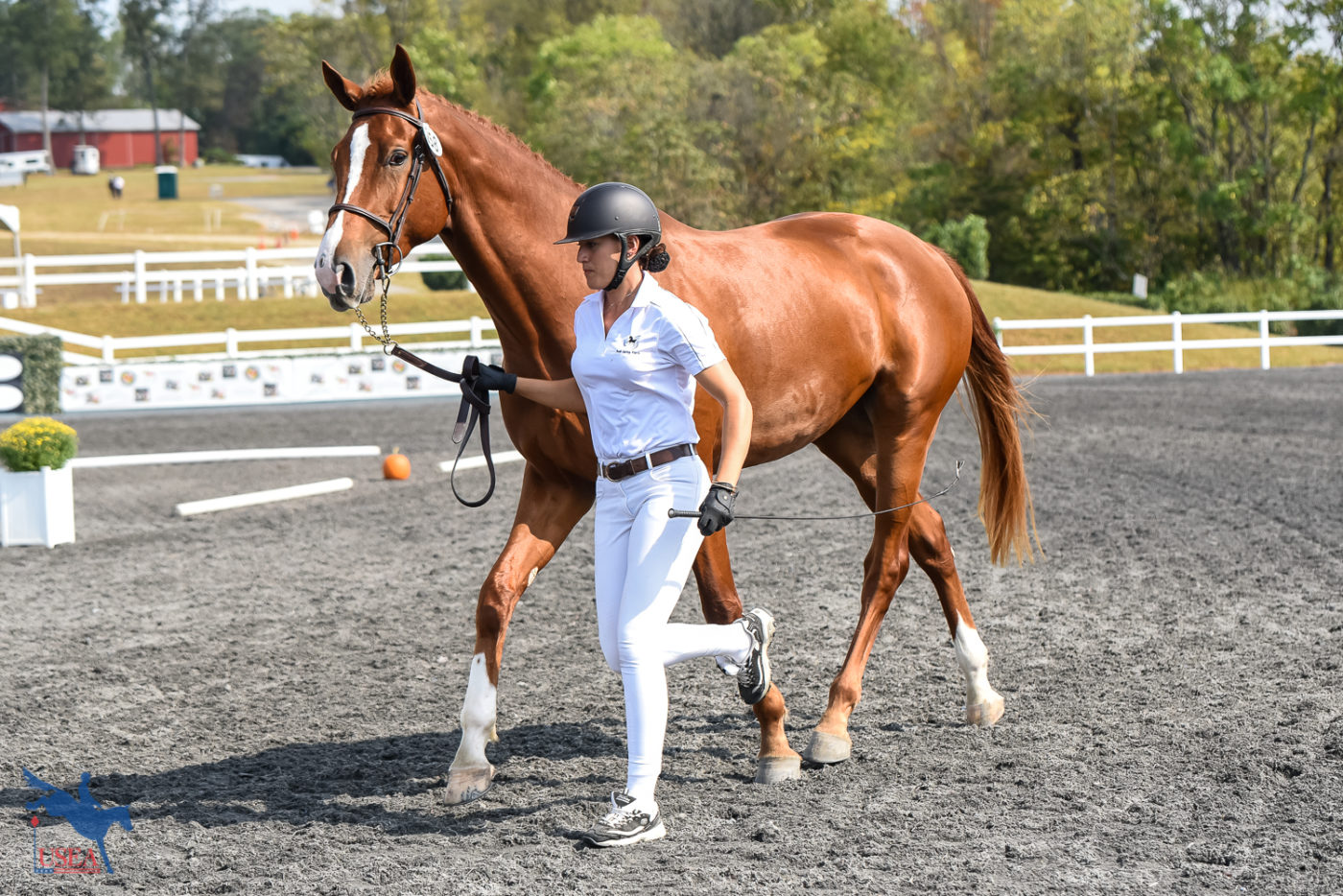 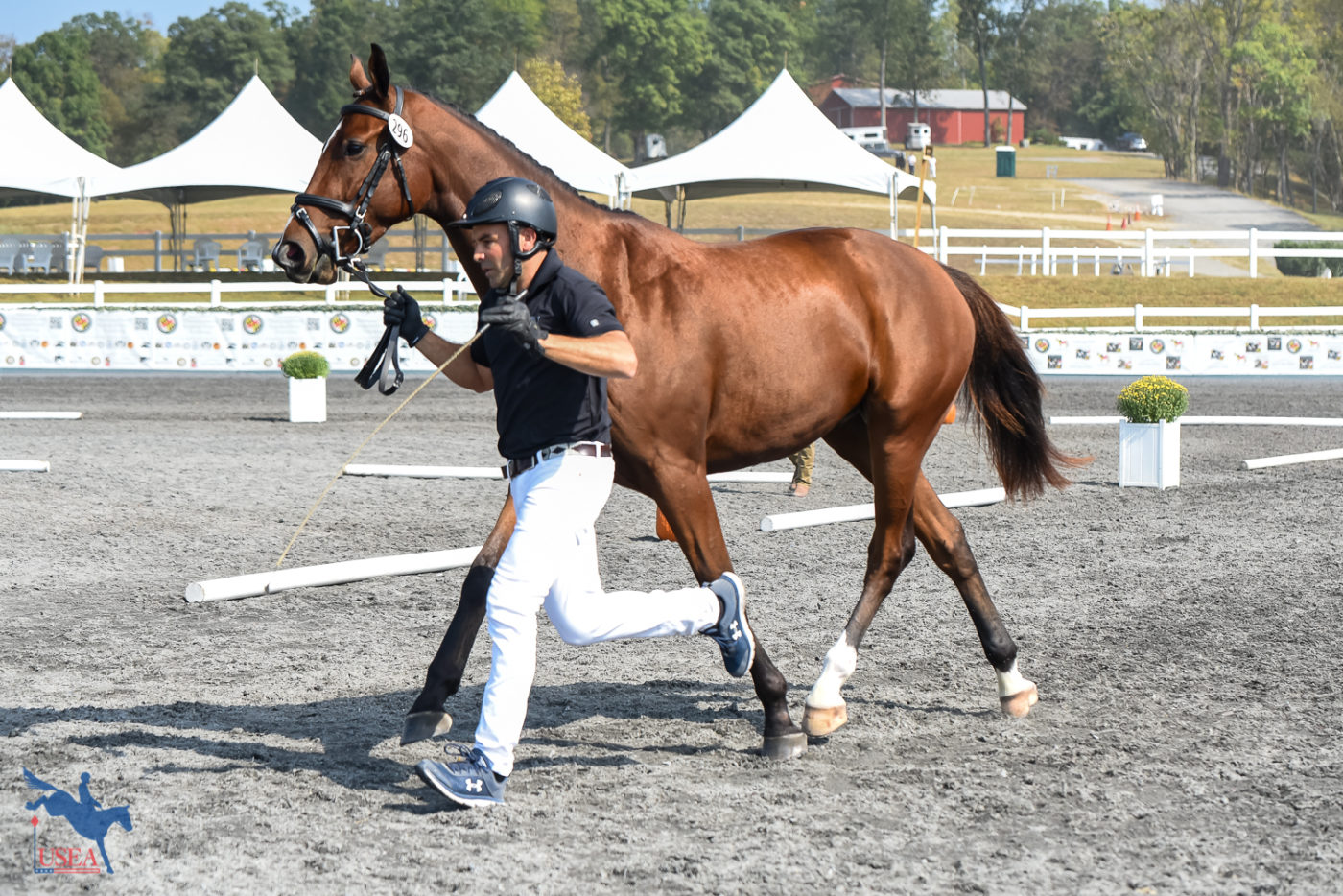 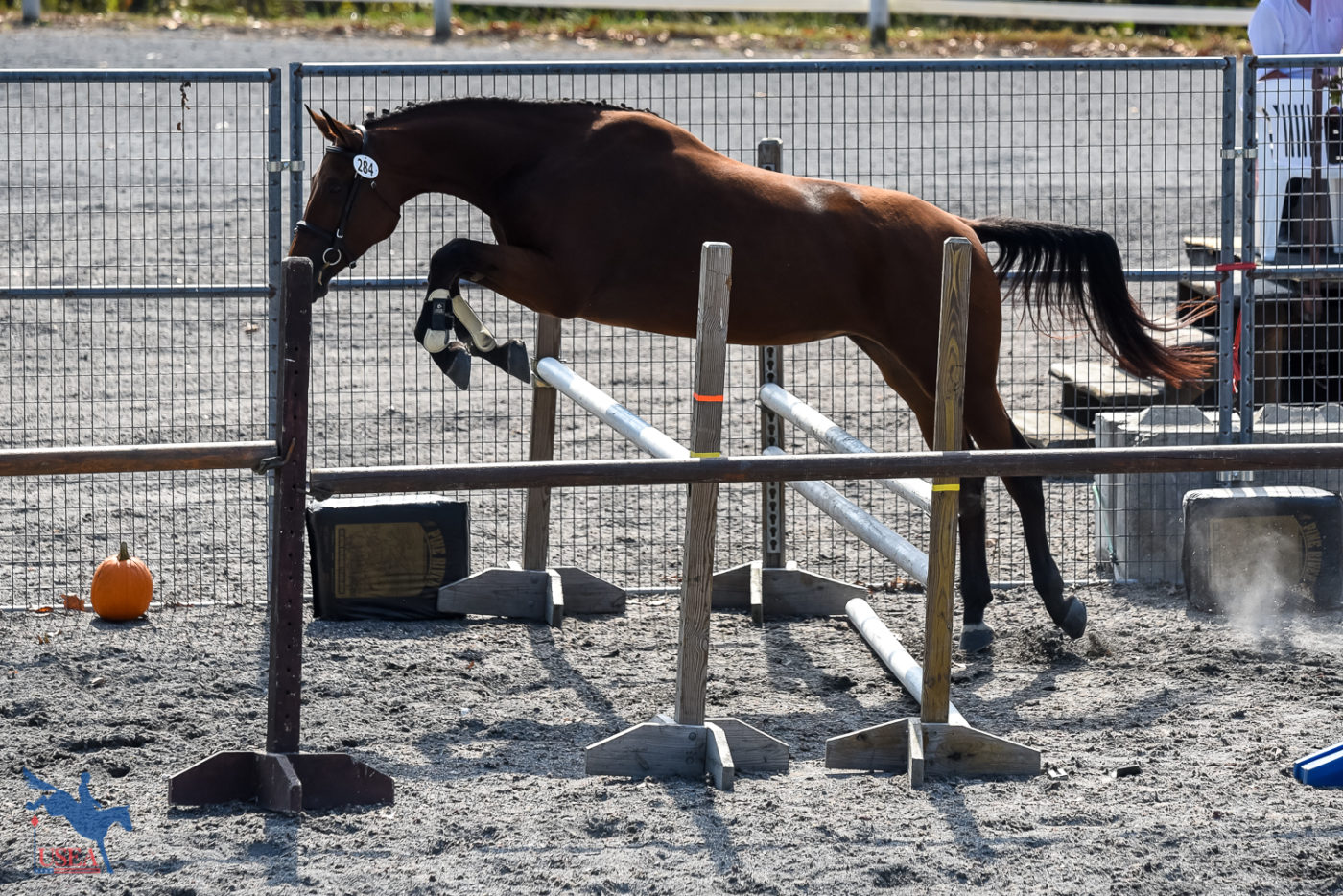 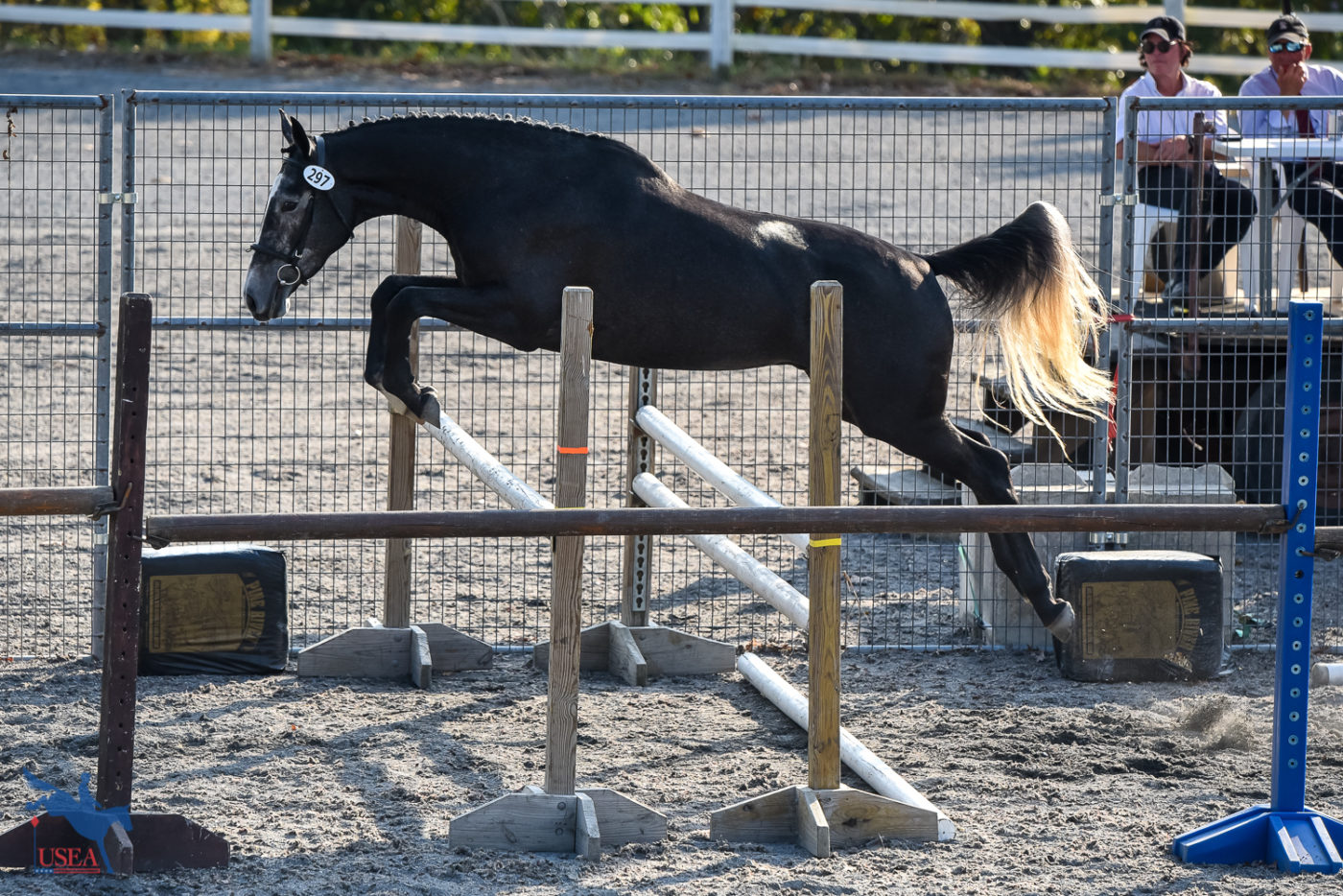