For the past two years, the British Team has finished third in the FEI Eventing Nations Cup at Great Meadow International (GMI). This year, the previous leaderboard stood on its head and saw Team Great Britain standing atop the podium on a score of 138.5 in the only Nations Cup competition in North America. Team Canada finished second on 148.7 and Team USA rounded out the top three on 157.5.

Team Great Britain (GB), made of up Sophie Brown, Ben Hobday, Georgie Spence, and Leslie Law, led the Nations Cup team competition wire to wire, taking the lead in the dressage phase on a score of 97.7, picking up just 1.6 penalties to add to their team score in show jumping, and finishing on a three-phase team score of 138.5 after today’s cross-country competition, more that 10 points ahead of the second-placed Canadian team.

Georgie Spence and her own and Suzanne Doggett’s 12-year-old Irish Sport Horse gelding Halltown Harley (Harlequin du Carel X Cummer Beauty) were the top-placed individuals for Great Britain, placing second on their dressage score of 35.2. Spence and Halltown Harley were the trailblazers for Team GB and they certainly blazed around Mike Etherington-Smith’s track this morning.

Ben Hobday and his own and Jane Chambers’ Shadow Man (Fidjy of Colors x Favorite Van de Keezerswinning), an 8-year-old Belgian Warmblood gelding, sat in second place overnight on a two-phase score of 29.7 but picked up an unfortunate run-out at 9B, the Beverly Equestrian Brush Corners, which caught out nearly half of today’s starters. The pair ultimately finished in 16th place on a final score of 56.9.

“It’s a little bit bittersweet for me,” said Hobday, “but the team has done an amazing job. It’s nice to be in the position I was going into cross-country but he’s a young horse and I think a lot of him. He just came out a little bit green, a little bit looky. As he cantered down the hill into the arena it was a little bit of a shock for him. It happens. This is the job we’re in and I’m grateful we got him home sound, safe, and he’s still feeling good. It’s disappointing, but we’re going to hold our head high and look to the next show. Hopefully that horse will do something very special soon.”

Sophie Brown and her longtime partner Wil (Silverstone x Sjoukje), a 15-year-old KWPN gelding she owns with her mother, also picked up 20 penalties at the Beverly Equestrian Brush Corners and added an additional 10.4 time penalties to their overnight score of 34.4 to finish in 18th place.

“It was good to come on a horse that’s still pulling,” said Brown. “I think the course did that really well. I know Wil like the back of my hand and he was jumping big. When you look back on the course, with the hanging log he became a little bit of an introvert on me, which then gave him a glance-off. I wish those corners were the other way around, as probably lots of riders do. What was good to know was that he came home pulling and quick and healthy and happy. Maybe another day my dice will roll a bit differently but it was good fun.”

Team Great Britain saluting the British flag as “God Save the Queen” played over the loudspeakers. USEA/Jessica Duffy Photo.

British Team Chef d’Equipe Philip Surl was back this year for the third time, and he shared that having been to GMI multiple times helped him prepare this year’s team for the competition. “It’s good to know the layout. Obviously with Mike [Etherington-Smith’s] courses, we know them very well in the U.K., but again he always builds a good track, and there’s always a fence that maybe catches people out.”

“The continuity here is through Alex [Van Tuyll] who looks after the horses,” he continued. “This trip would not really happen without Alex doing everything. Her work ethic is unbelievable, her organization, how happy she always is, even when the riders get a bit tetchy or I have a moment.”

Team Great Britain, winners of the FEI Nations Cup at Great Meadow International, and their support crew posing for a photo before this afternoon’s award ceremony. USEA/Jessica Duffy Photo.

“It’s great to come over here. We’ve had a couple of more challenging years. Today was a roller coaster from start to finish. It didn’t go out the way my dream happened last night; it certainly didn’t work out that way, but it just shows in a team competition anything can happen until the very end.”

“The support with the guys that come out with the horses – not just the team riders – has been fantastic,” Surl commented. “I think the first year we maybe only had one owner that made the trip out. We’re just incredibly grateful to be here and give our horses and our riders the opportunity to ride at this level at a competition of this magnitude . . . [Great Meadow] is a fantastic venue. We always feel so well looked after and welcome, so thank you.”

Team Canada sat in third place after dressage and show jumping, adding 18 penalty points to their team dressage score of 108.9 in the show jumping phase, but moved into second place today to finish the weekend on 148.7.

Lisa Marie Fergusson and her own Honor Me (Brynarian Brenin x Dream Contessa), a 12-year-old Welsh Sport Horse gelding, were the last to go for Team Canada, moving up from 38th place to eighth place after posting one of today’s few double-clear cross-country rounds, finishing as the highest placed rider for Team Canada. Jessica Phoenix and Amara Hoppner’s 11-year-old Thoroughbred gelding Bogue Sound (Crafty Shaw x Carolina Blue) also put in a double clear round to jump from 41st place overnight to finish in 12th place. Waylon Roberts and Kelecyn Cognac, Anthony Connolly and Skye Levely’s 15-year-old Australian Thoroughbred gelding, were first out this morning for Team Canada, coming home just a hair over the time to finish on 51.9 in 15th place. Shelby Brost and Crimson (Etta x Dixieland Heat), her own 15-year-old Thoroughbred mare, fell victim to the Beverly Equestrian Brush Corners and were eliminated.

“It was a really important team competition for Canada,” said Phoenix. “It’s the first competition that we’ve had our full support staff at. Just to have that level of confidence in the people that are supporting us is huge. [From] our vets to our support staff, the riders that are on the team, the grooms, the owners. It’s a huge thing to be able to come here and have it feel like a real team competition and to have everybody come together and pull it off as well as we did give us a lot of confidence moving forward.”

Team USA were in the middle of the pack after the first two phases of competition, adding 20 show jumping penalty points to their team dressage score of 103 for second place overnight. However, penalty points picked up on cross-country this morning dropped the U.S. team back into third place on a final score of 157.5.

At this afternoon’s press conference, Surl and the British Team members were wearing green ribbons in honor of Jonty Evans, the Irish rider who suffered a fall at Tattersalls and remains in a coma. “[His accident] shows that this sport is one of those that can be high and it can be low. Our thoughts and prayers and luck are with him and his family because we all know that this sport is a contact sport and we’re all only sometimes a heartbeat away from something happening, but that’s what makes us love the sport. Our thoughts and prayers are with Jonty and all his connections.”

Click here for final scores for both the teams and individuals and check out photo galleries from dressage, show jumping, and cross-country. 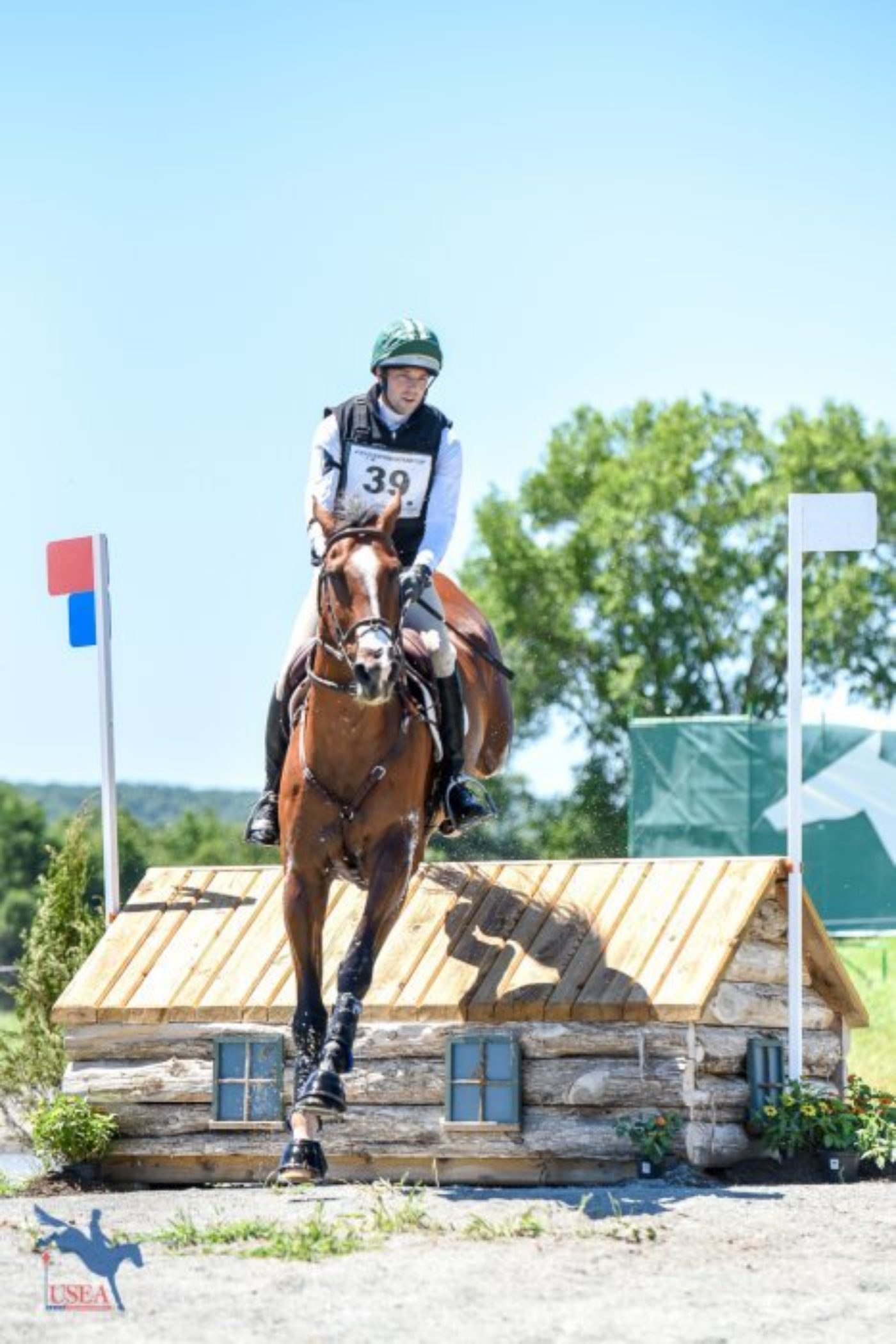 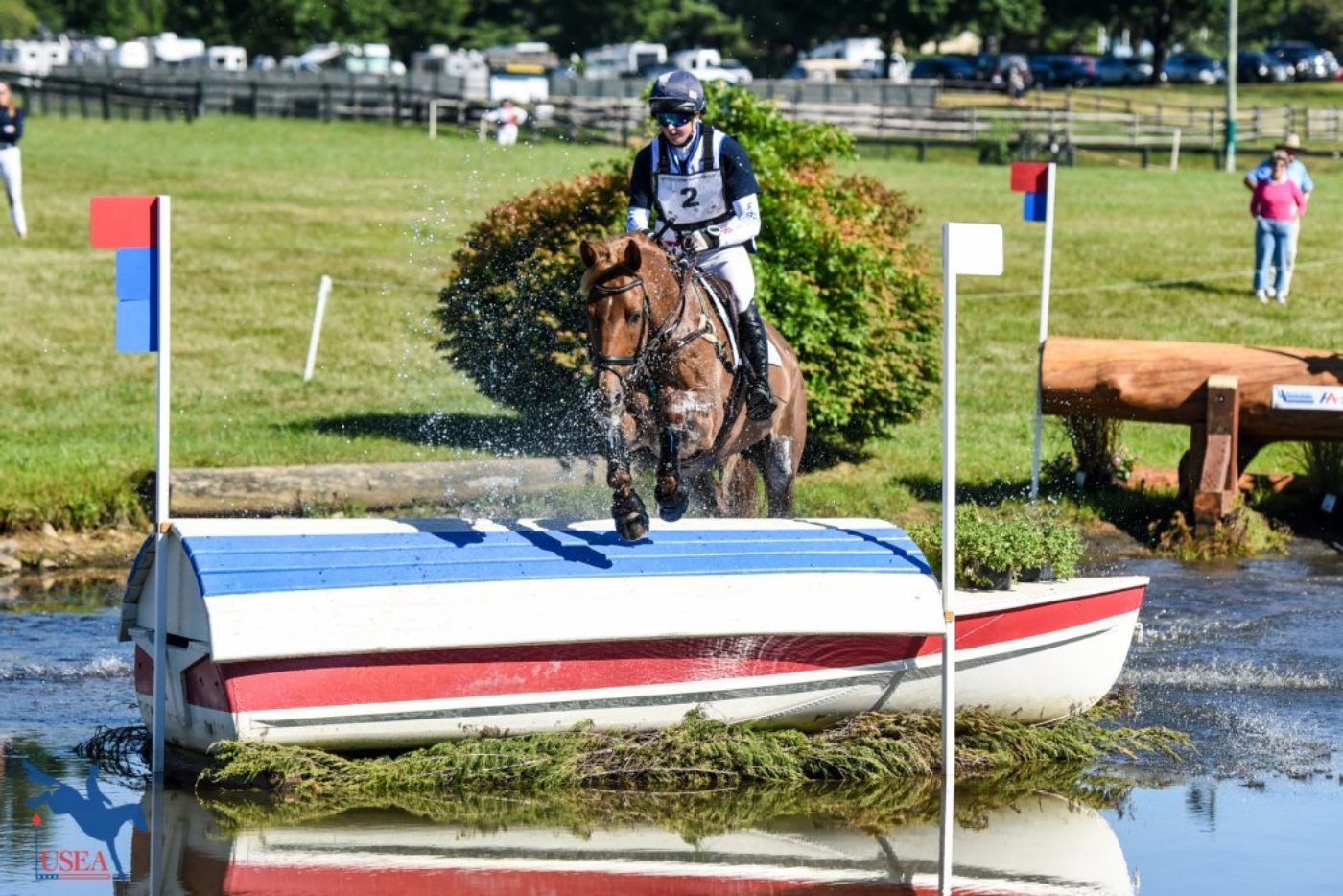 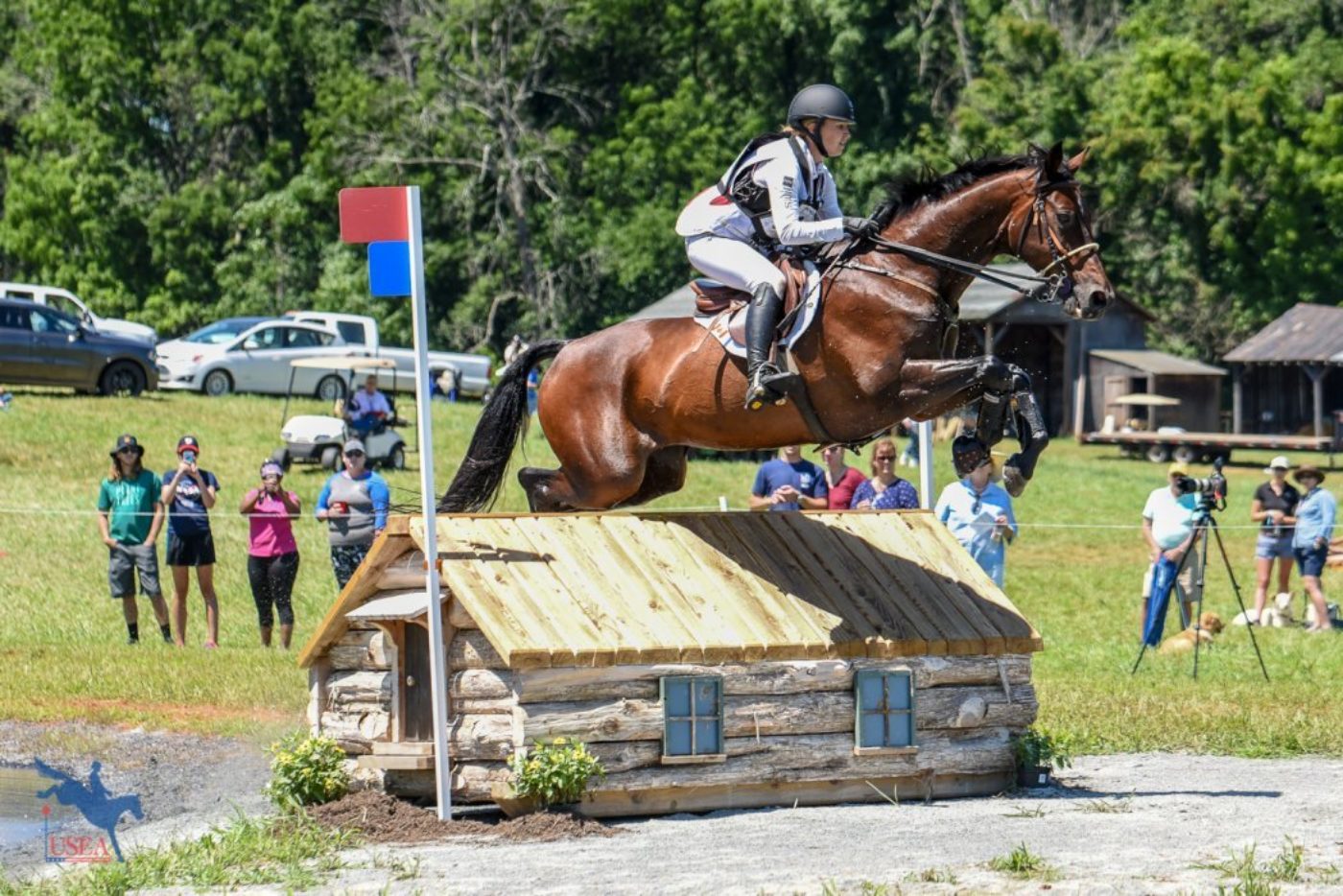 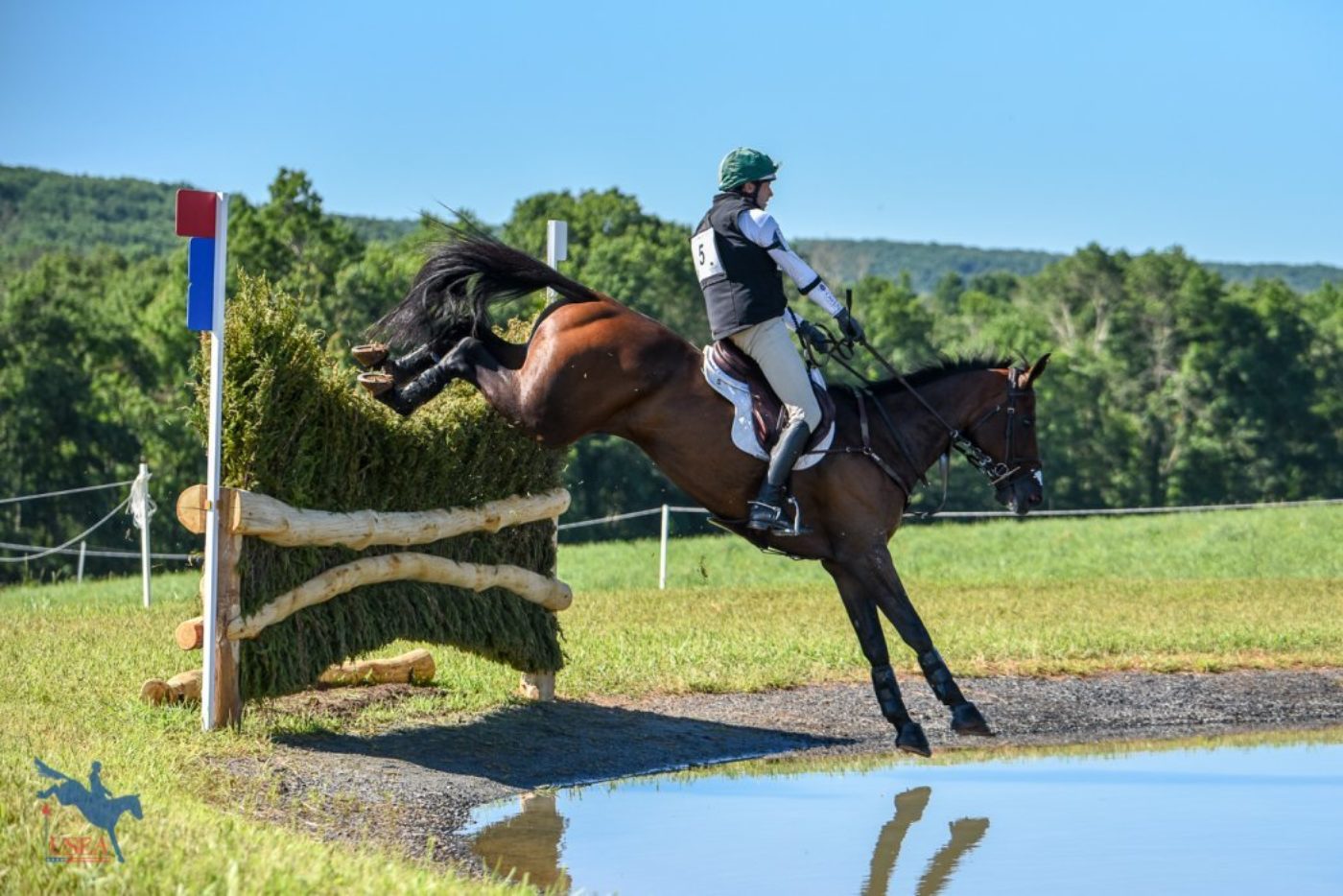 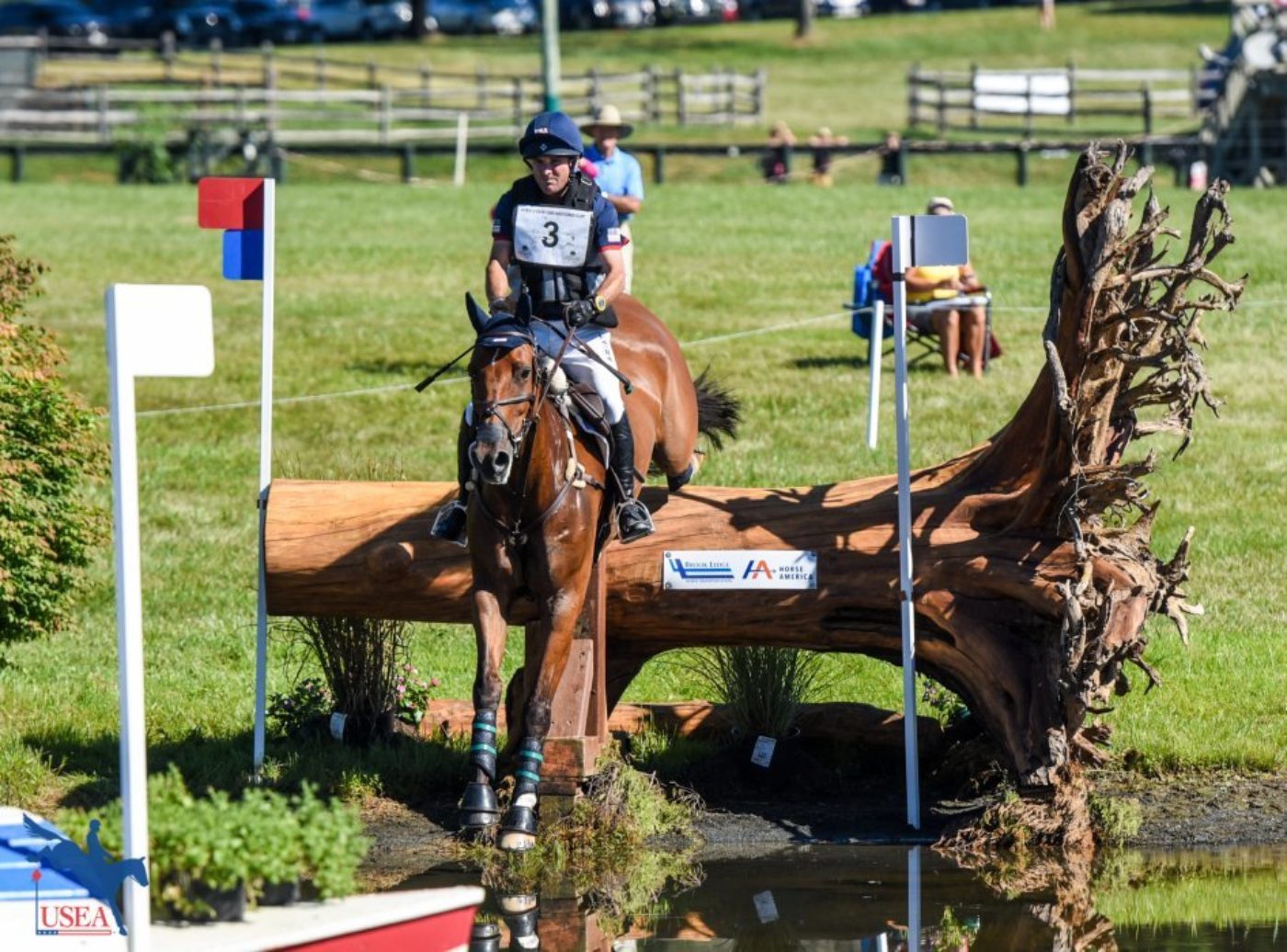 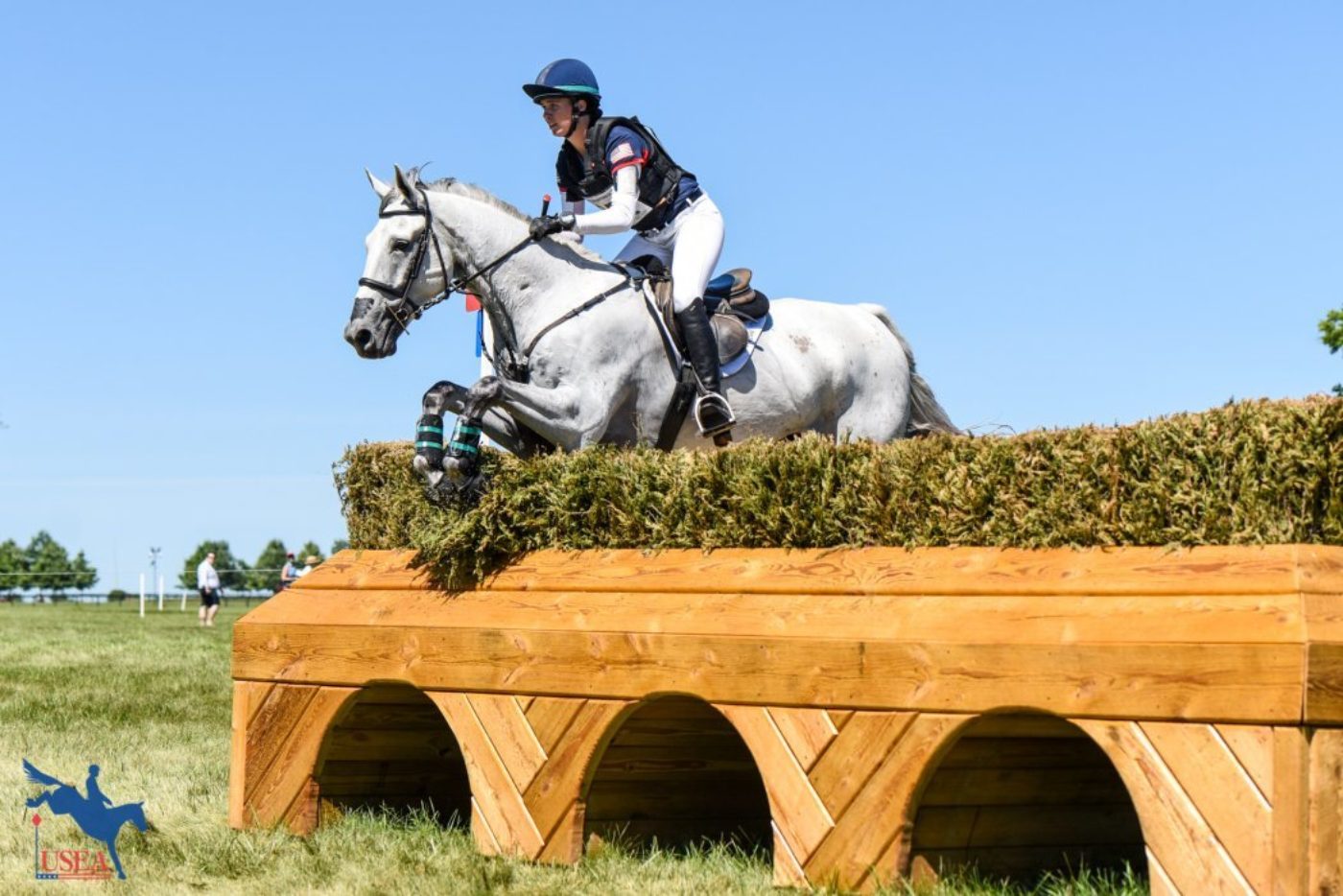 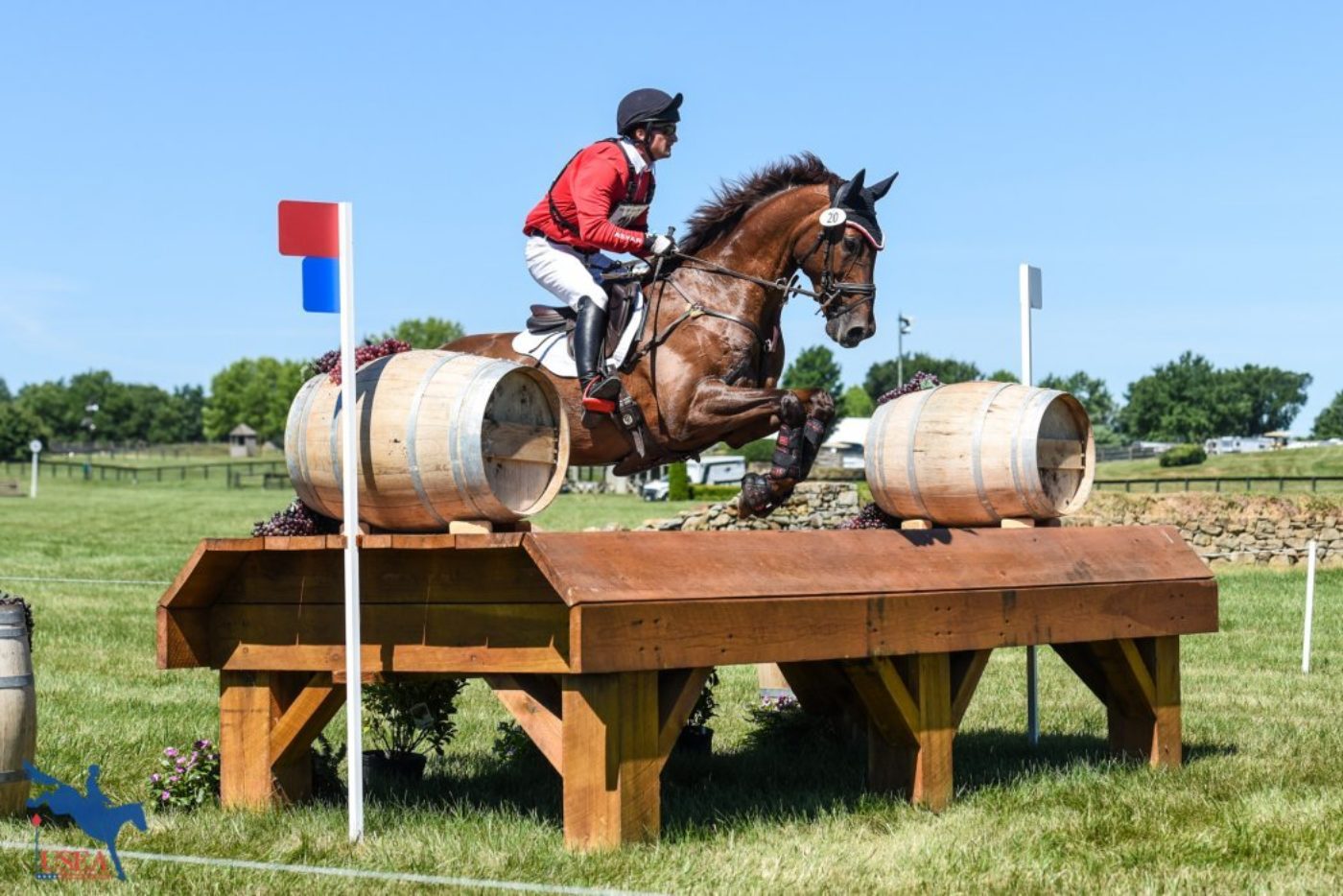 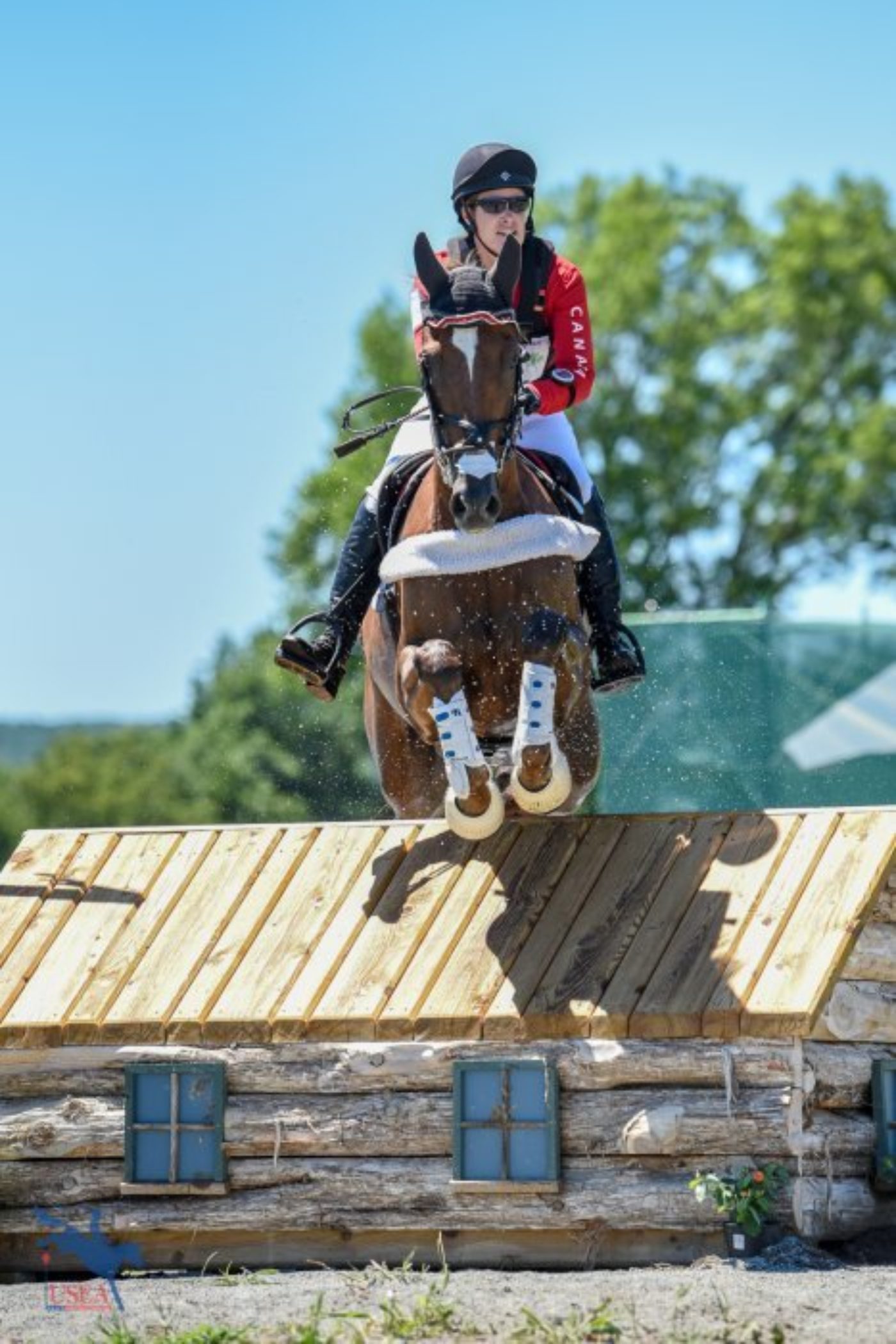 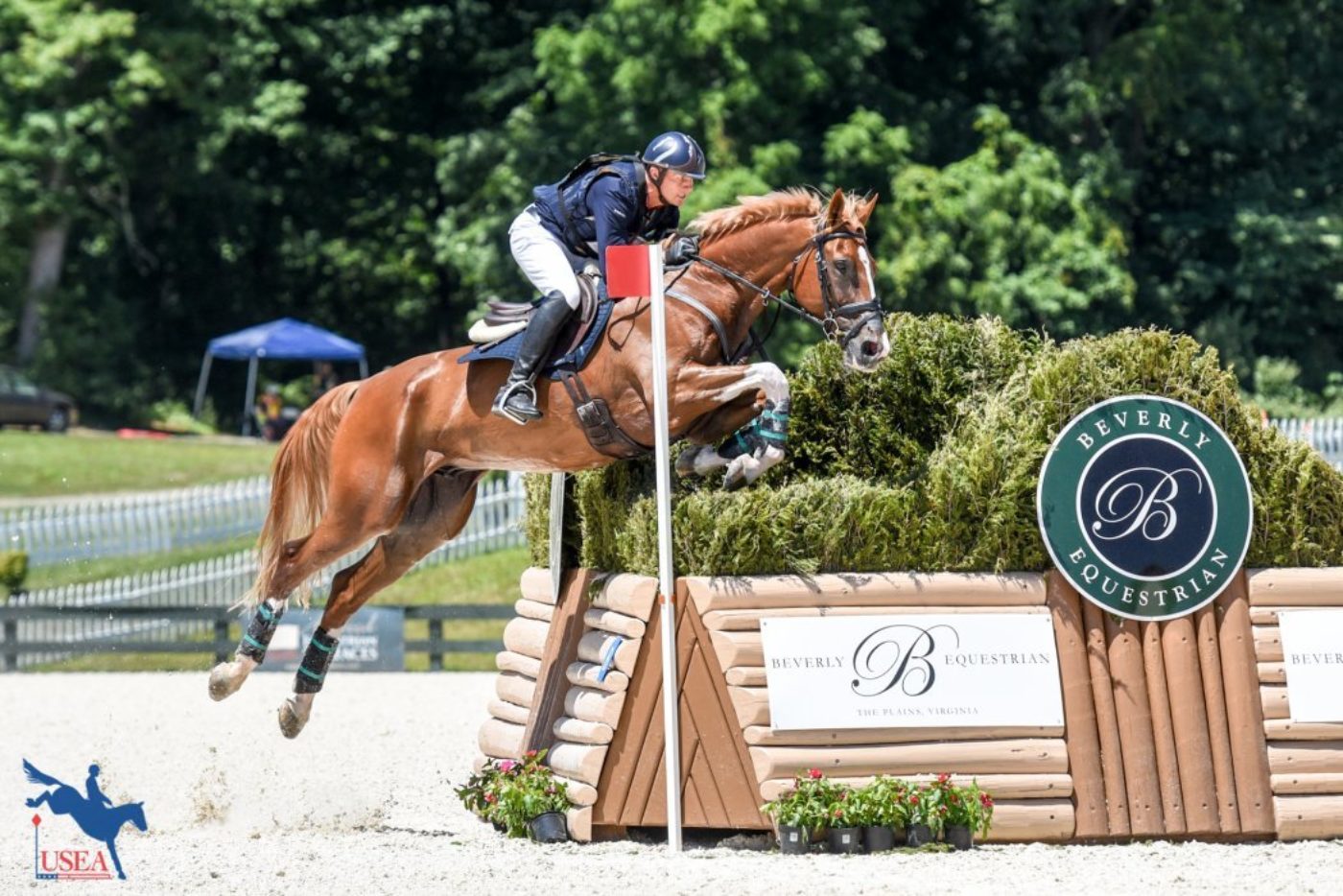 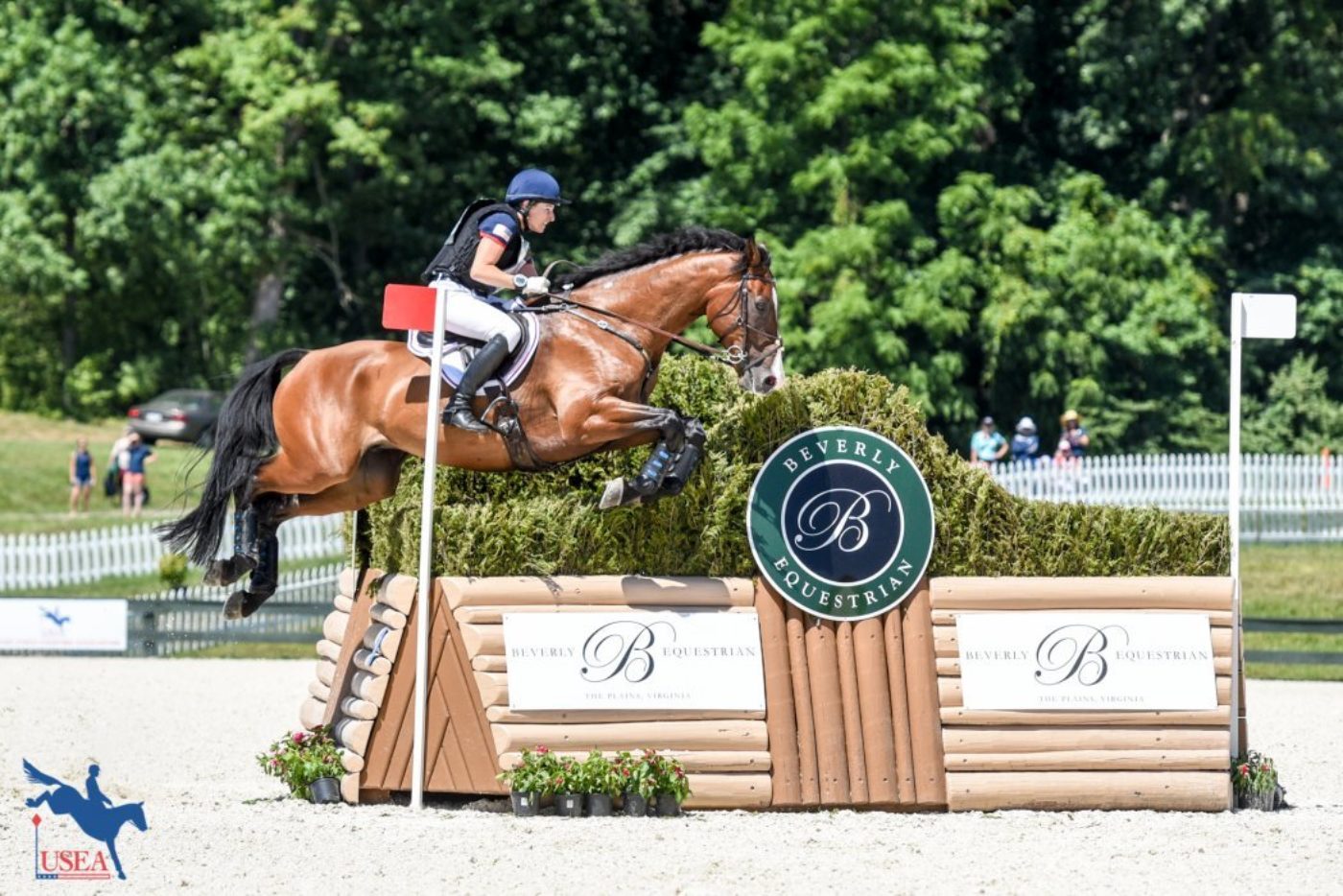 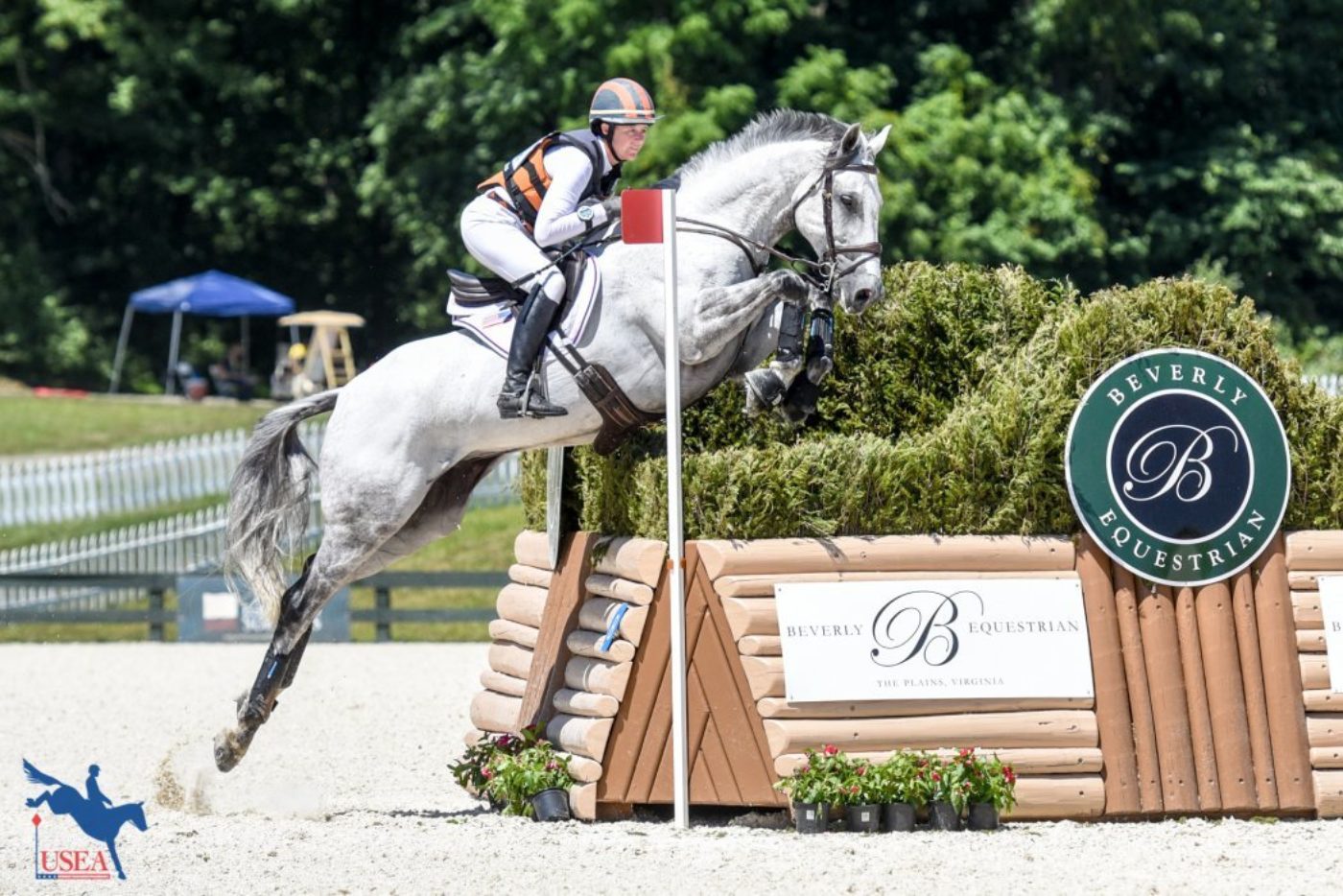 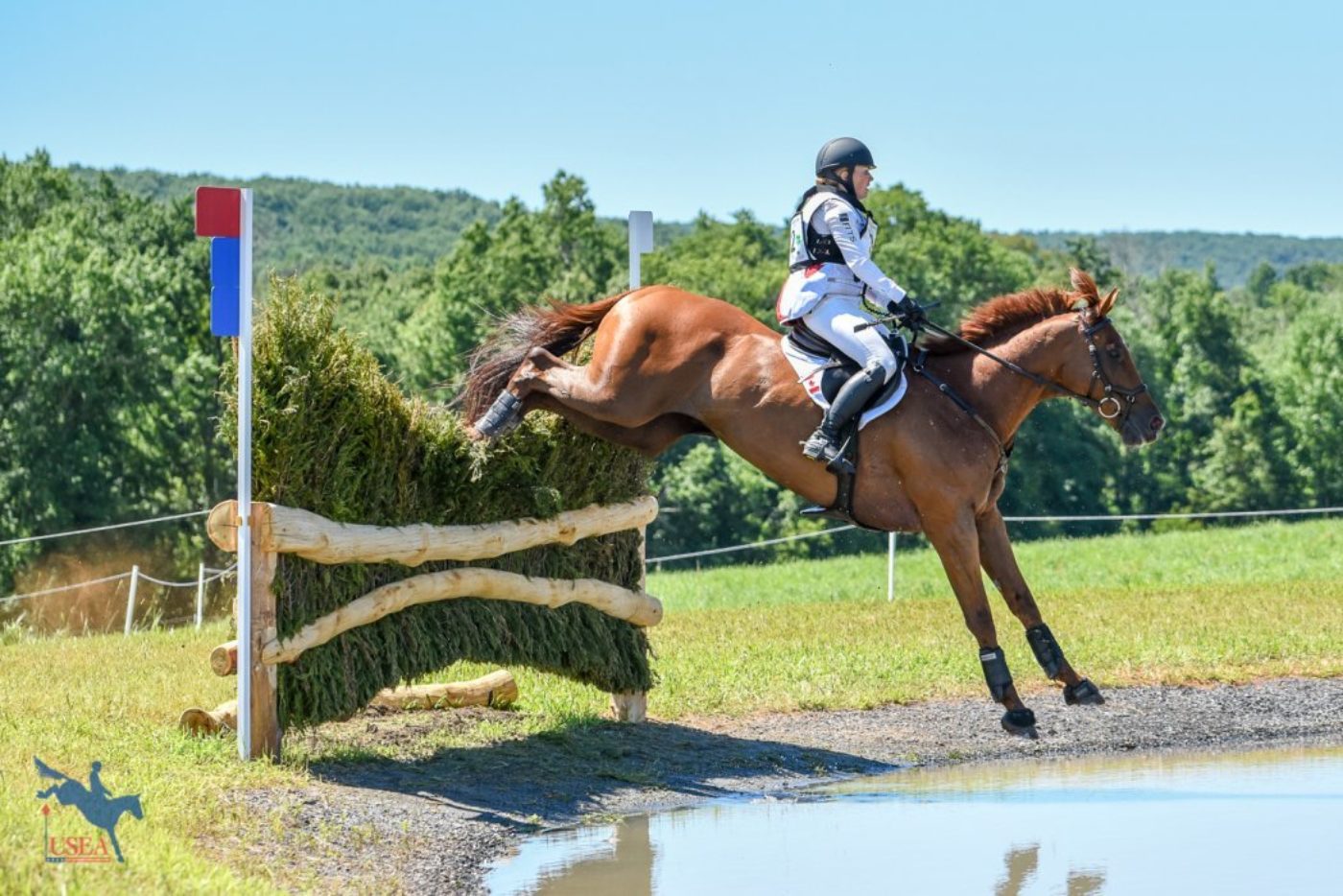