The Western Underground, Inc. Coconino Horse Trials & Three-Day Event concluded today at the Fort Tut Hill Fairgrounds in Flagstaff, Arizona. All fifteen horses in the Training, Novice, and Beginner Novice Three-Day passed the final horse inspection this morning and then it was on to show jumping, the final phase of competition. When the dust settled, Jennifer Miller, Leslie Villela, and Eileen Morgenthaler, sat at the top of the leaderboard in their respective divisions to take home the blue ribbons.

Dr. Jennifer Miller and her own 13-year-old Dutch Warmblood mare Bon Bon (Consul x Dark Promise) picked up 1.2 time penalties over Alice Sarno’s show jumping course, but when overnight leader Chloe Bonnaure and Texas Red had two rails down, Miller and Bon Bon moved up to take home the win in the Training Three-Day on a score of 30.0.

“She’s incredibly light on her feet she’s got great gaits, she has a great jump – she’s allergic to wood – she moves well,” Miller described. “She’s a bit of a princess – it kind of has to be her idea, but she’s been fun. She’s a challenge – certainly after today I owe her a lot of carrots. She felt a touch tired, but she jumped really well and she certainly dug in and helped me when she needed to – she normally isn’t that generous. She normally doesn’t have trouble making the time but she had a couple of seconds today. Her cross-country yesterday was awesome and she was very rideable and fun to ride. She steeplechased well – I was very pleased. I had a very positive weekend.”

Miller and Bon Bon have been together for 10 years as Miller purchased her when she was just a 3-year-old. “I found her locally from a gentleman named Dave Weller who was breeding jumpers and he decided he was no longer going to pursue it with young horses so he had a group of young horses for sale so we went down and had a look, so I found her in South Phoenix. She’s been a really great horse, she’s been solid, she hasn’t been shown the most consistently, but she pulls through, like last year going to the AEC she didn’t have a lot of prep but we went and had fun. She’s a great mare – she’s been a treat.”

This year, the AEC is on Miller’s radar as a possible next stop for Bon Bon, but she hasn’t made any definitive plans. “We’ll proably do some local events and head back to Galway in the fall – maybe try the Training Three-Day at Galway.”

Chloe Bonnaure and Texas Red, her own 10-year-old Thoroughbred gelding, had two rails down and picked up 1.2 time penalties in today’s show jumping to drop into second place and finish the weekend on a score of 35.6.

Kimberly Storm and her own Bucky O'Hanlian (Sempatico x Kentucky Gamble), a 14-year-old German Warmblood gelding, pulled a single rail but remained in third place to round out the weekend on a score of 55.9.

Shawn Ortiz and Patriot's Liberty (Amazing x Easter Bunny), her own 8-year-old Oldenburg gelding, finished the weekend in fourth place. They were also were presented with the award for best conditioned horse.

Leslie Villela and Diesel, Gayle Miller’s 13-year-old Thoroughbred gelding, jumped double clear in show jumping to lead the Novice Three-Day division from start to finish on their dressage score of 27.4. “It was the best ride we’ve had, after cross-country,” Villela said. “I kept him together. He was really good in the warmup, [he had] a couple rails but he still made it.”

Villela said her future plans for her and Diesel are still up in the air. “We had signed up for Rebecca but we were late, so we were on the waitlist,” she explained. “I think I’m in seventh, but I moved up from 16th, so I don’t know if I’m going to make it or not. If not, we’re going to Twin.”

Regardless of what show they compete at next, they’ll be competing at Training level. They had a successful move up at the Coconino Summer I Horse Trials last weekend. “Dressage obviously needs help, but the cross-country was great. We went a little slow but it was my first one. Stadium we had a rail, but other than that he really picked up his legs and jumped everything great.”

This time last year, Villela and Diesel were doing their first Beginner Novice together. A year later and they’ve had a successful move up to Training and completed their first Classic Series Three-Day Event. “Alice thought he was doing really good with me so she said we could move up. We’ve been doing Novice up until this last weekend. We only did one Beginner Novice, I think that’s a big accomplishment because I’ve only been doing Pre-Comp or Beginner Novice on ponies. Diesel was like my first real horse.”

Lucy Leff and her own Amarillo (Rocky Creeks Sail Away x Daisy), a 14-year-old Palomino gelding, had a single rail but moved up the leaderboard another spot to finish the weekend in second place on a score of 35.9. Leff and Amarillo also won the award for best turned out.

Sara Vogelpohl and her own Stellar Blue (Matty G x Lite Nite), an 11-year-old Thoroughbred gelding, moved up to third place from fifth place after pulling just one rail end on a score of 36.9.

Eileen Morgenthaler and Chicago GS, her own 8-year-old Trakehner gelding, jumped a clear round to maintain their dressage score of 23.6, securing the win in the Beginner Novice Three-Day.

Morgenthaler refers to Chicago as “Nico 2.0” after one of her other horses, Nico, who is currently rehabbing from an injury. She hopes to have both of them out and competing at the Novice level by next spring. “I got Nico from Canada too – Canada must be the place! I got Nico on the Vancouver side from Sabrina Glaser and Chicago from Jessica Phoenix on the other side [of the country]. They’re both grey, 16.2 hands, except he’s a Hanoverian/Oldenburg. I won the Area VI Championships on him. I’m extraordinarily lucky, I know how lucky I am in the horses I have. But I have tougher ones that have made me better through the years.”

“All I care about is improving,” Morgenthaler continued. “I came off the course and said to John, my trainer, ‘Was that a good round?’ and he said, ‘That was the best round you’ve done on him.’ That’s more important to me than any ribbon because at my age ribbons are not important, it’s improving and getting better and loving this sport and these animals.”

Morgenthaler’s next stop with Chicago is Woodside, followed by Twin Rivers in September and Woodside again in October. She plans to stay at Beginner Novice for the next couple of shows and evaluate the possibility of moving up later this fall. “I’ll see how I’m doing – I know I’ll definitely by April of next year be at Novice with him. I’ll bring my other one out at Beginner Novice in October and then maybe do both at Novice in April – that would be a goal. And I’d come back here in a heartbeat. It would be ideal to do the Novice Three-Day with Chicago – that’s kind of my goal.”

Jacquelynn Schoeggl and her own 6-year-old Paint mare Stellaluna jumped clean in show jumping to move up from fifth to third on their dressage score of 28.6. 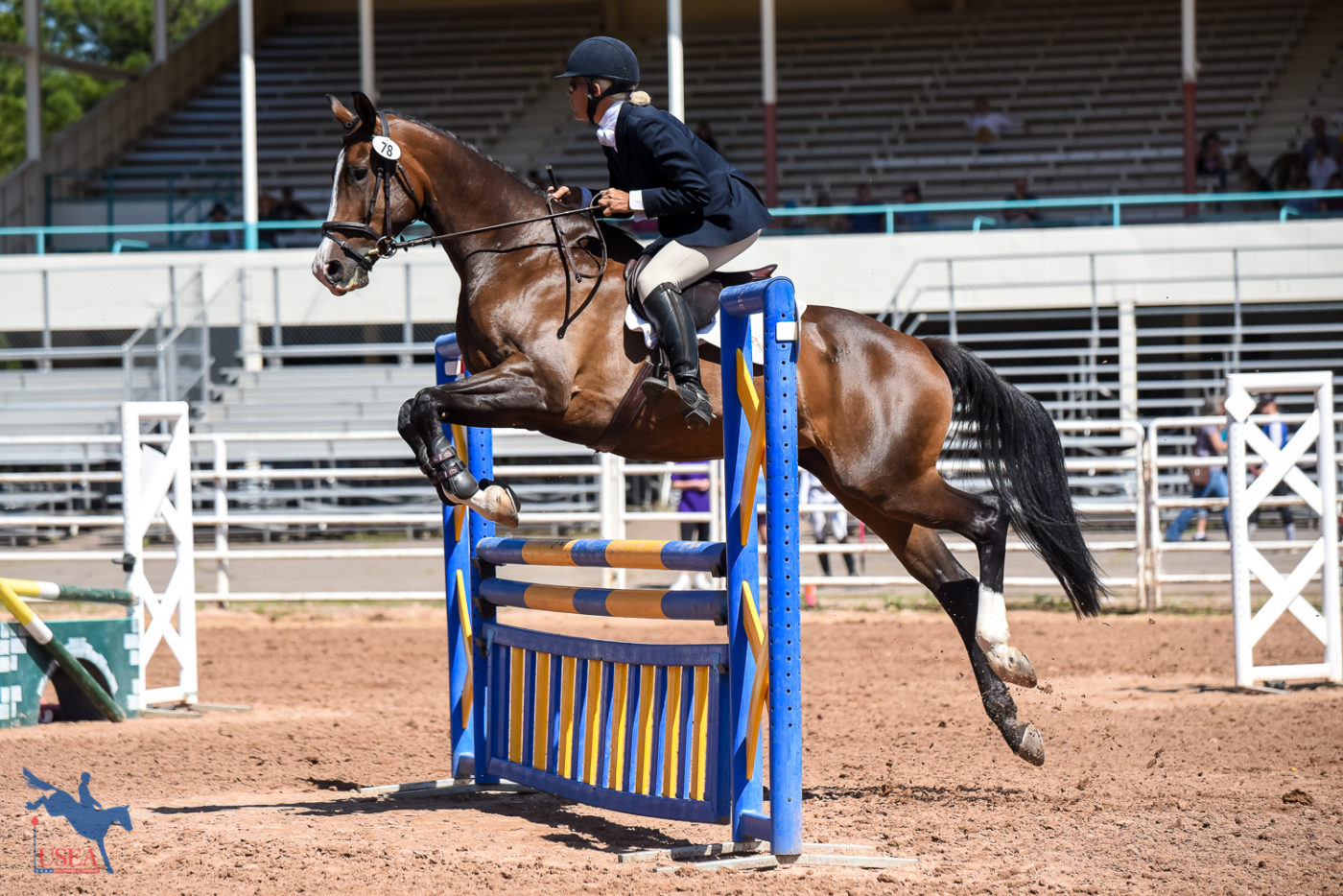 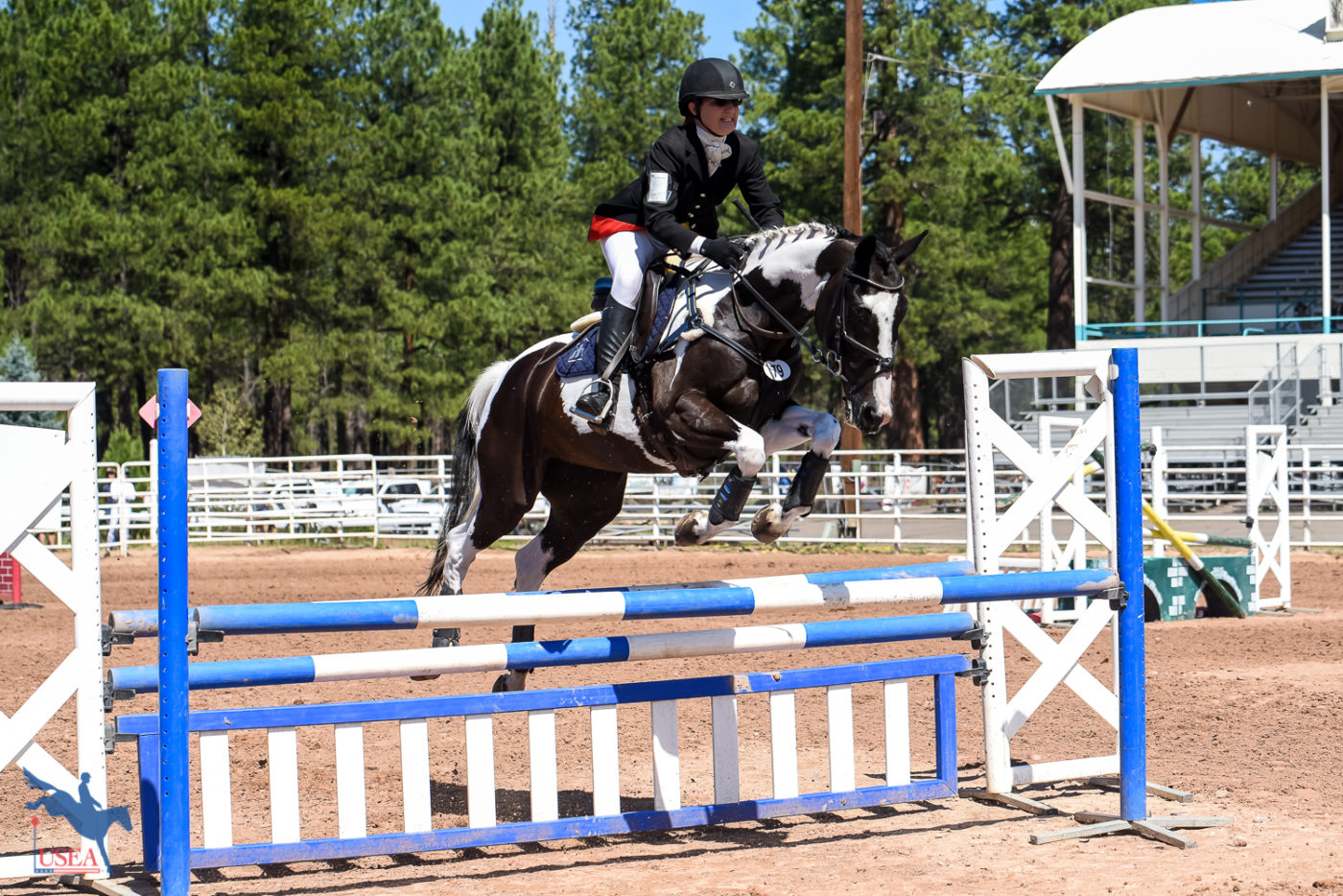 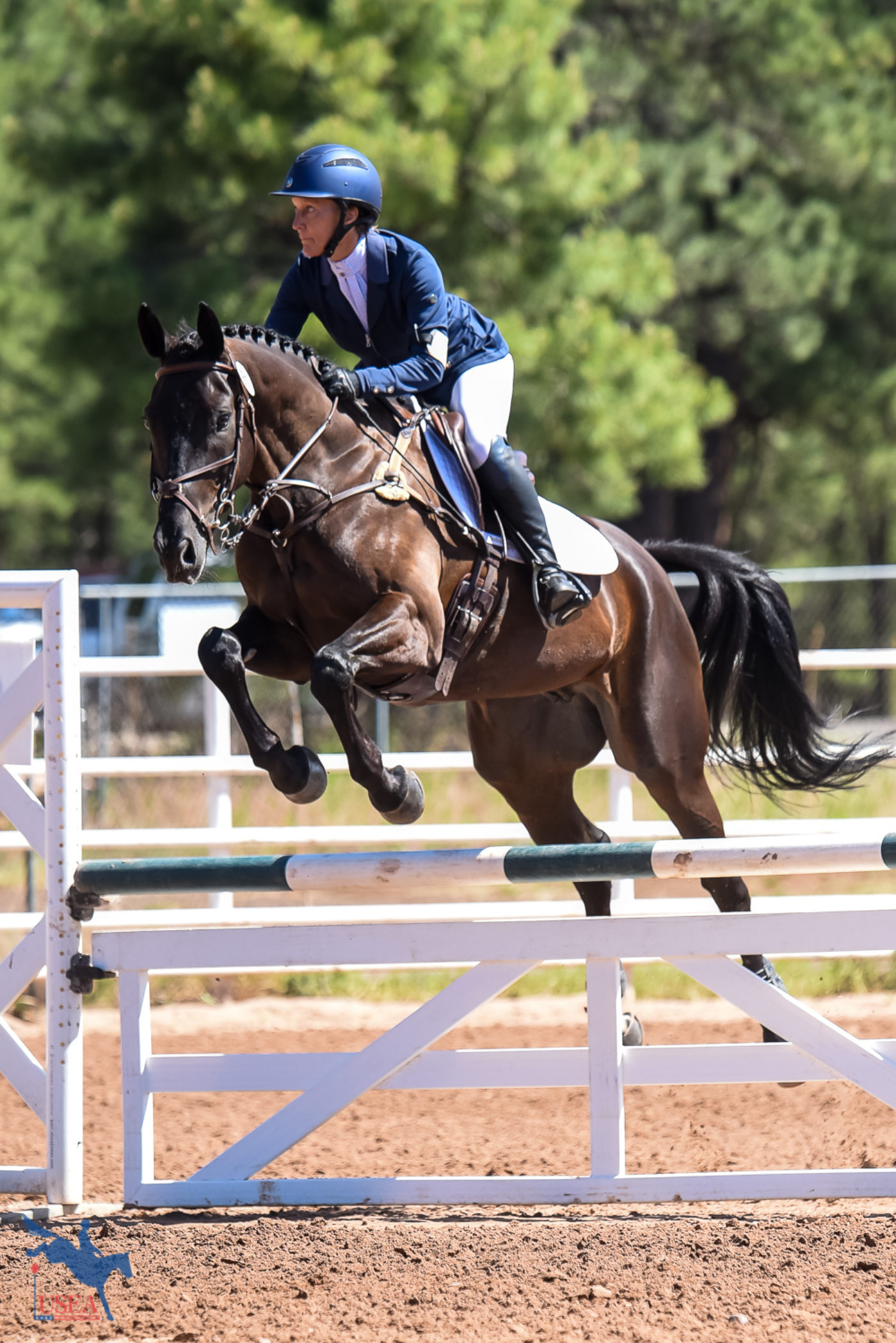 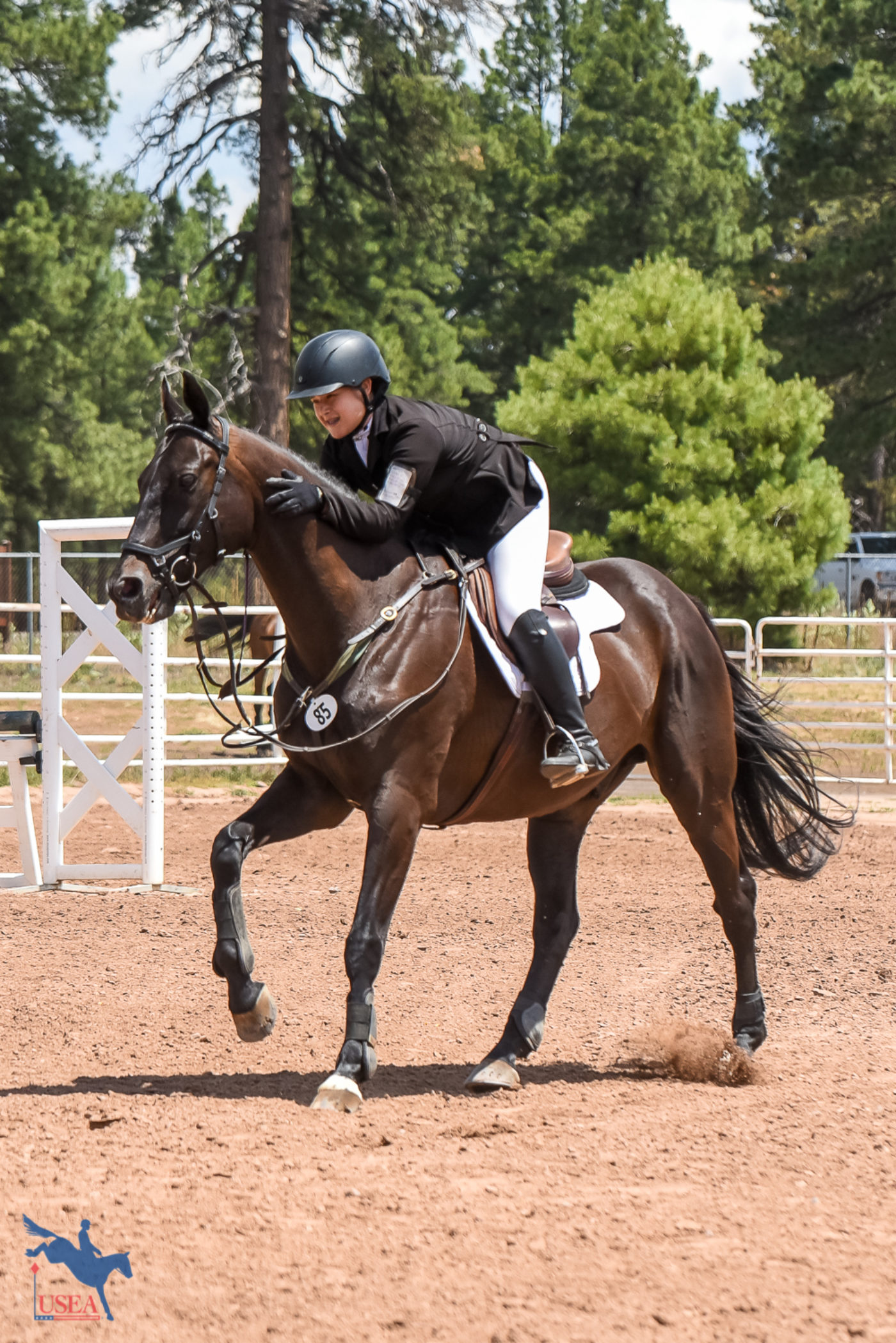 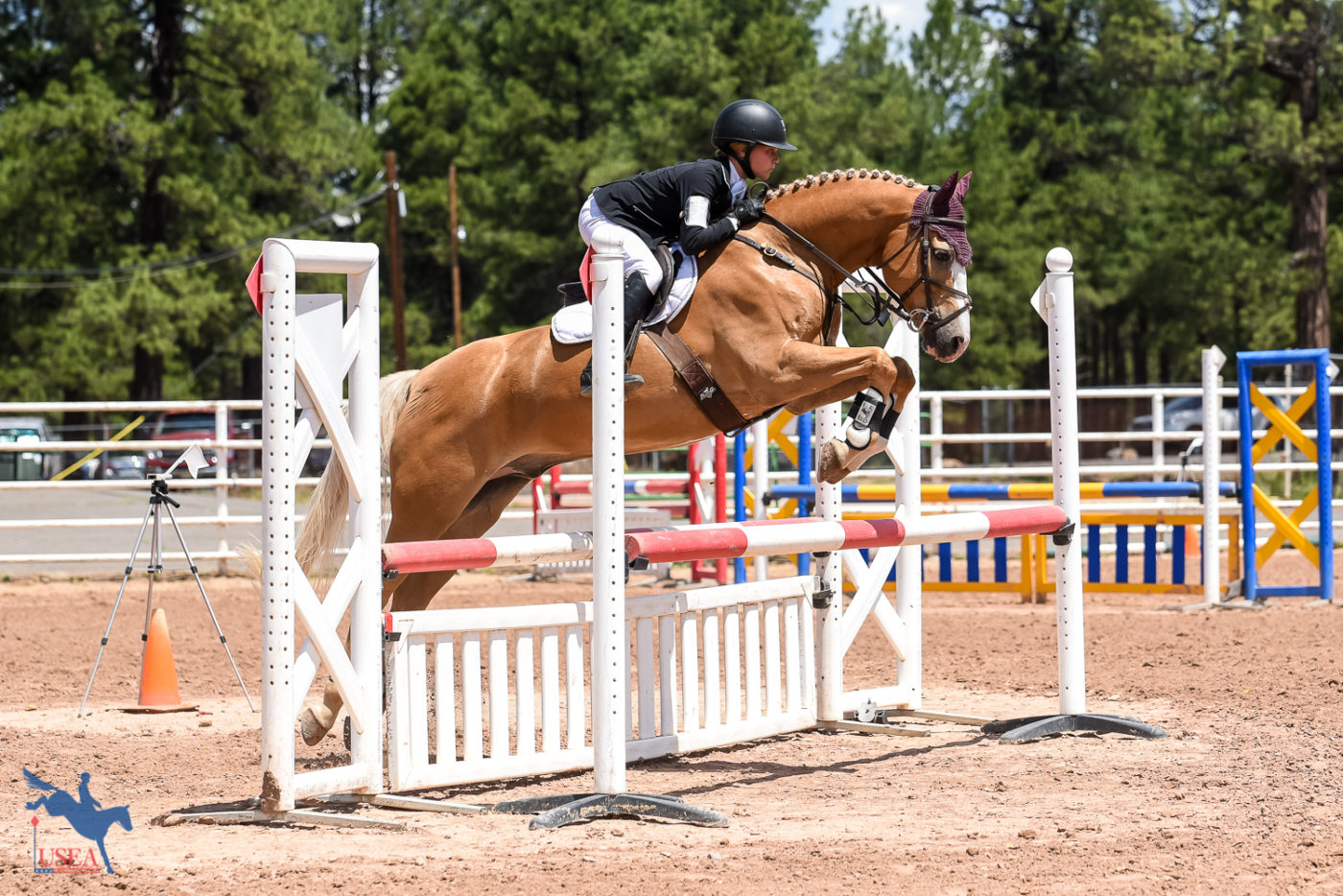 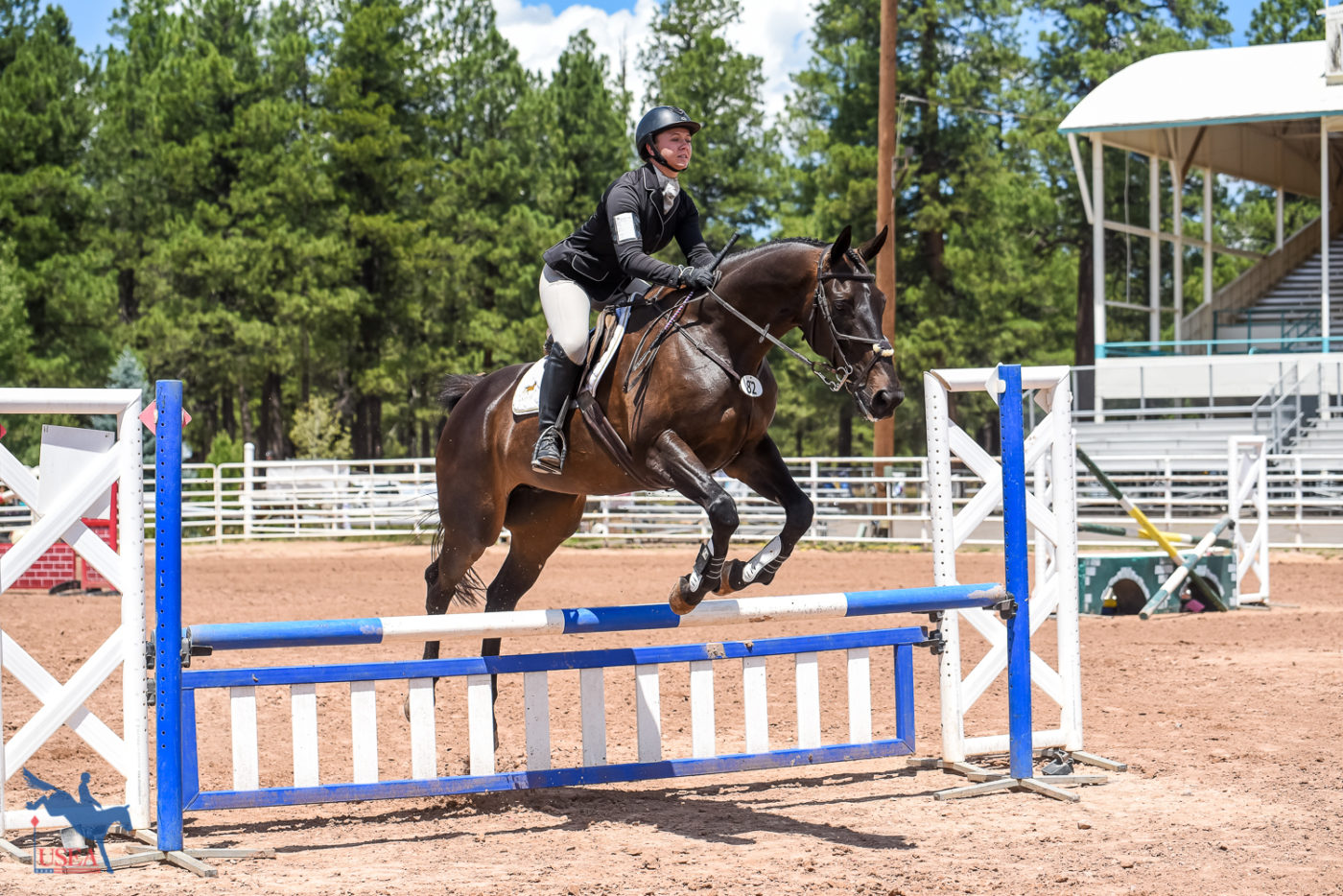 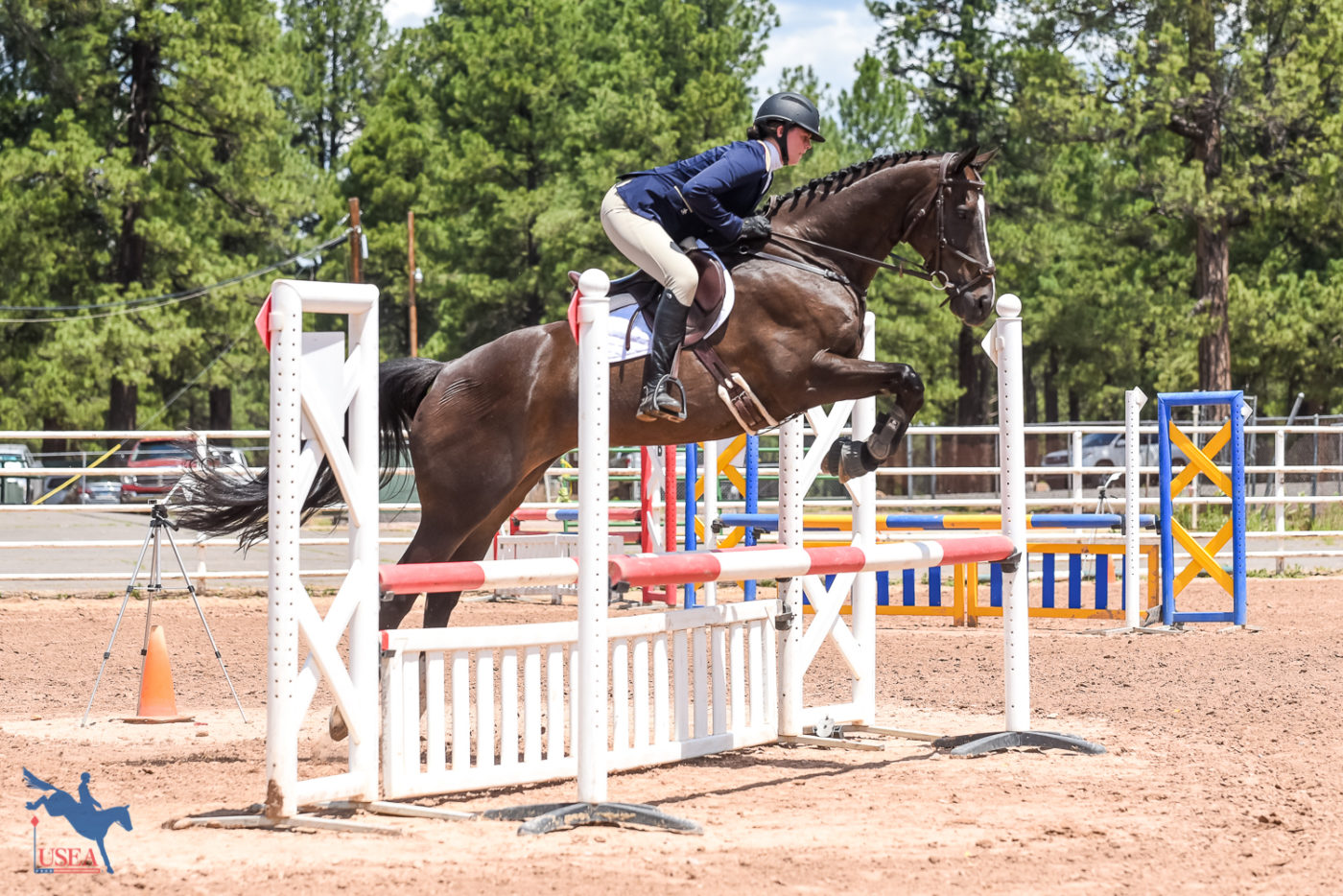 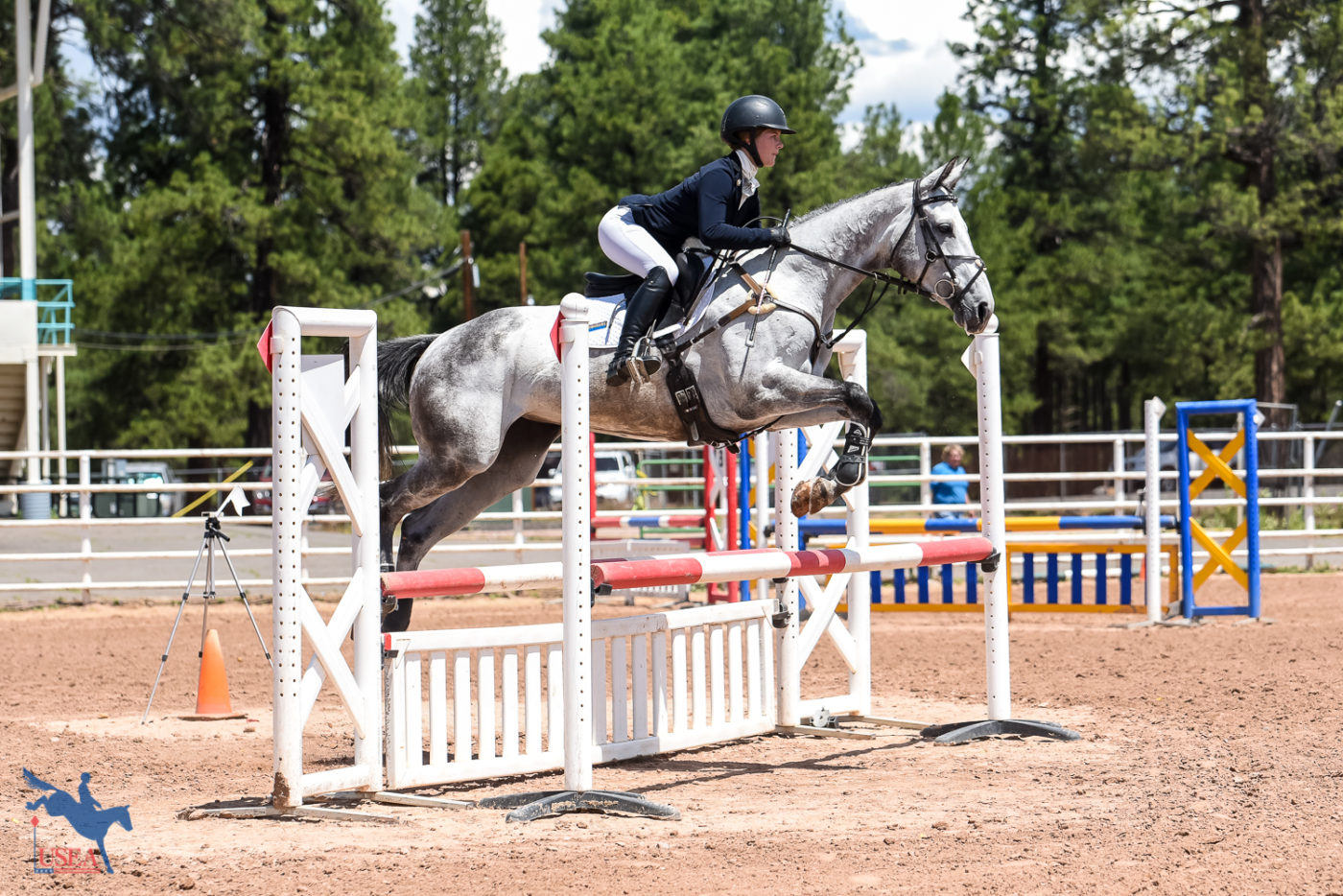 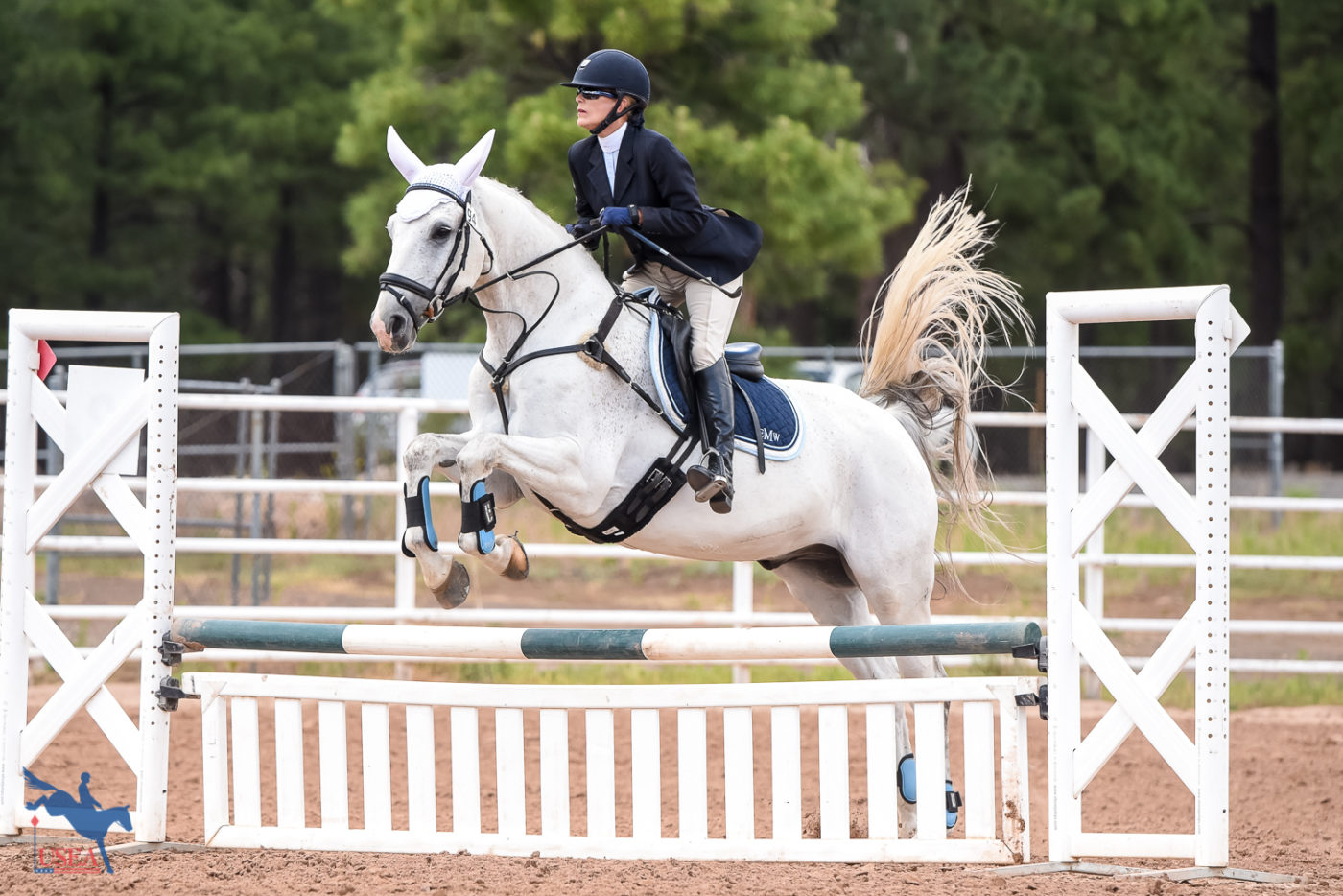 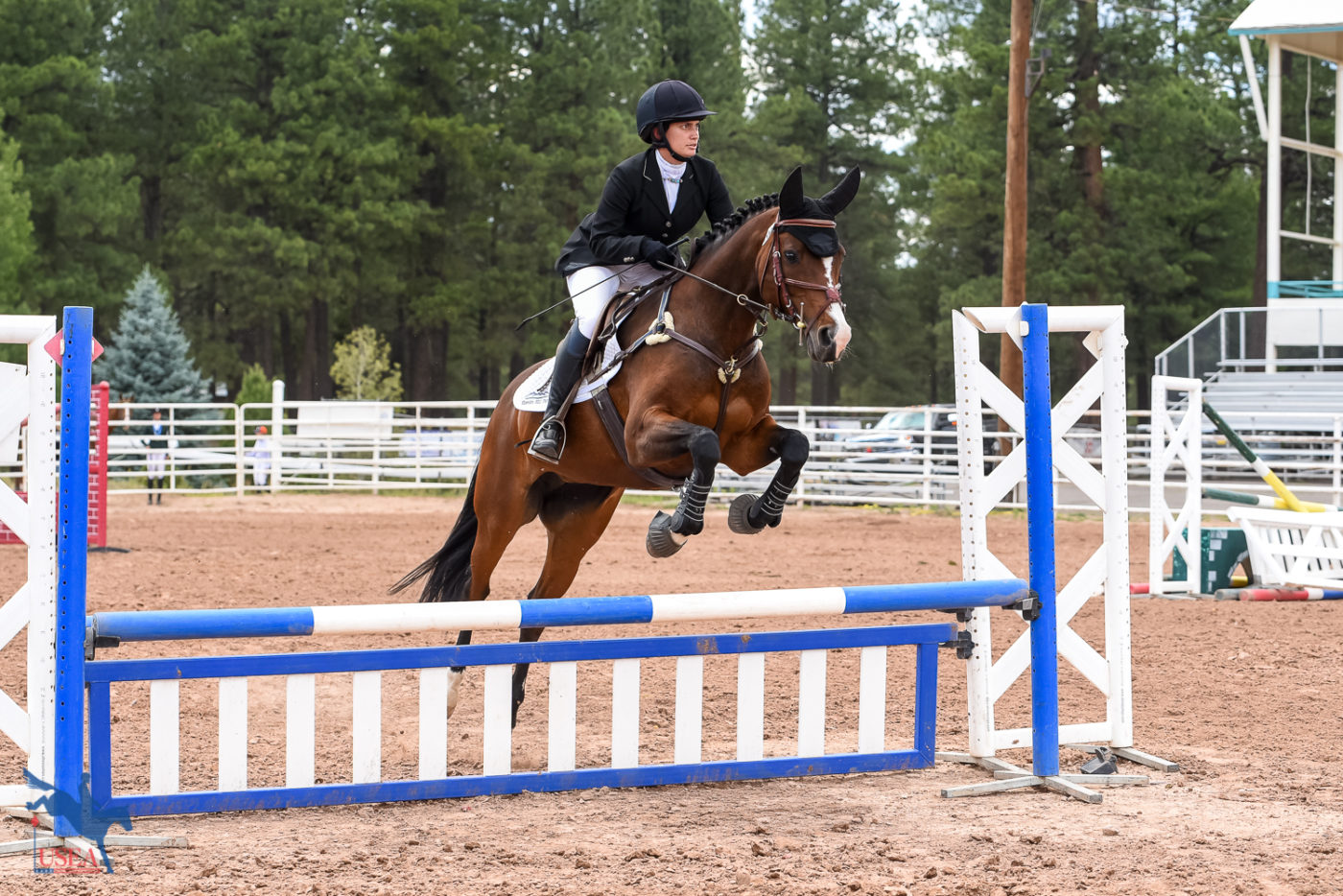 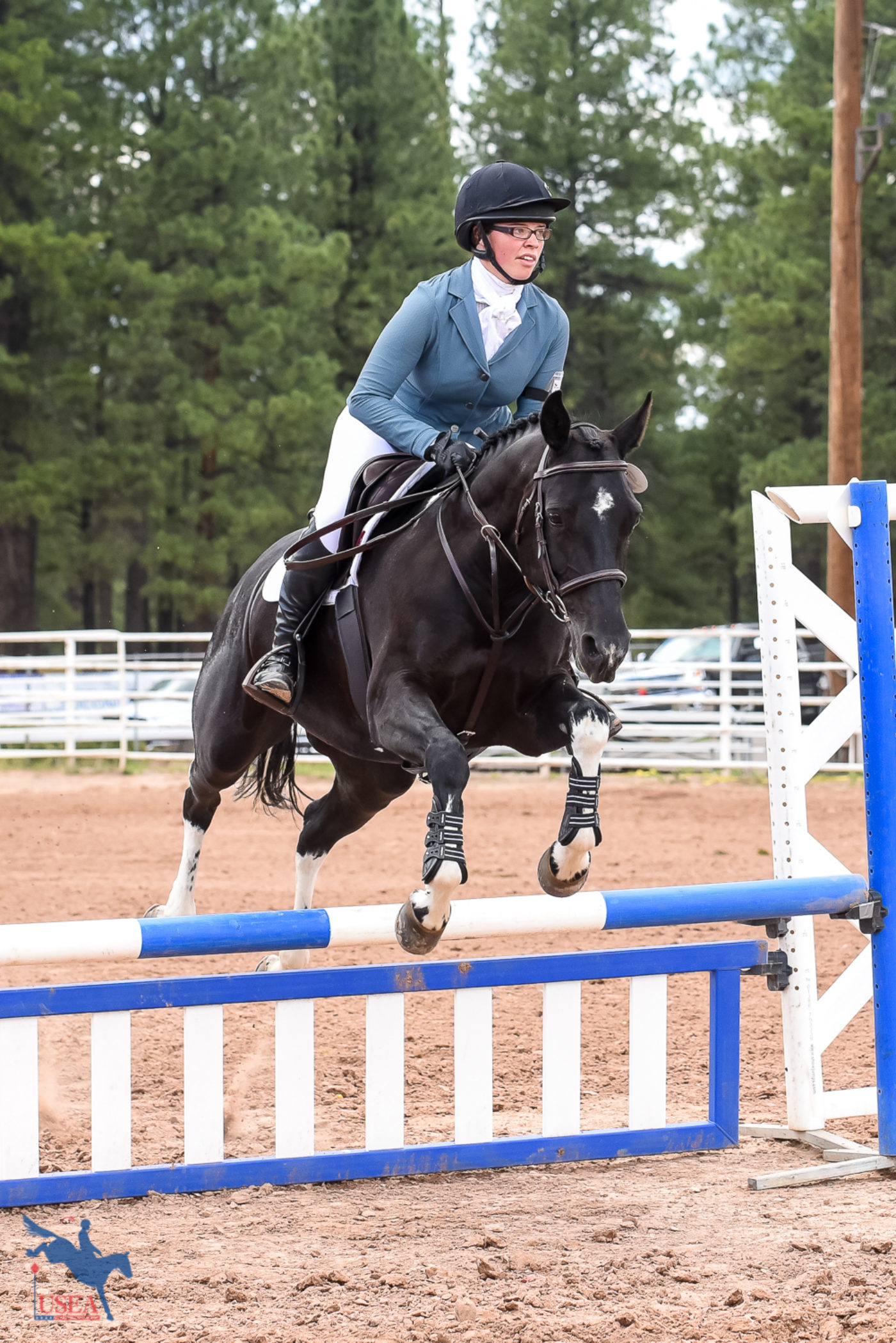