It was a game of seconds out on the cross-country today at the Ocala Jockey Club International Three-Day Event. Twenty of the 31 starters jumped around Clayton Fredericks CCI4*-L course without jump penalties, but only two managed to cross the finish line without any time penalties. And both of those crossed it bang on the optimum time of 10 minutes and 26 seconds.

Lauren Kieffer targeted this event for Landmark’s Monte Carlo for a few reasons, but one of those was the fact that no one made the time last year. With Jacqueline Mars’ 13-year-old Irish Sport Horse gelding (Formula One x Glamour) being such a fast horse, she thought the course would suit him for success.

“He’s a homebred, so I’ve ridden him his whole life,” explained Kieffer. “We’ve got a good partnership. He’s always been a fast horse, and we were quick, but it didn’t feel like we were taking risks – he is easy to be quick on. The course suited him because he doesn’t pull, and I wouldn’t say it was the most fun course – the jumps were fun, but the roping was weird. You had a lot of unnecessary yanking them off their feet, which was unfortunate because it’s such a great piece of ground and it feels a lot like Kentucky.”

Kieffer said that the course wasn’t right for a big, bold galloping horse, but rather a nippy pony especially with the way it was roped and the turns that you had to make. While the time was one reason she brought “Patrick” down to Ocala, another reason was the show jumping on grass in a big open arena which he seems to prefer.

“Show jumping is his bogey phase,” Kieffer said. “He doesn’t do well with pressure, so it will be an interesting mental exercise to go in like it doesn’t matter tomorrow. But we know that’s his thing, and Mrs. Mars knows that’s his bogey. We do the best we can by him and try to prepare him tomorrow as best we can. We’ll enjoy tonight and just take it as it comes.”

For most of the day Phillip Dutton was showing up in ninth place with Sea of Clouds due to quite a few time penalties, but Dutton was sure he crossed the finish line under the optimum time. Dutton and the 8-year-old Thoroughbred gelding (Malibu Moon x Winner’s Ticket) were held on course before fence 7 when Arielle Aharoni fell from Dutch Times, but the hold time was miscalculated and after Dutton protested his double clear round was recorded and he moved from 12th to second overnight.

“I didn’t think it would be quite as strong of a course here . . . Fair Hill typically has more of a championship feel, but today rode more like a championship. I wanted a nice move up course, and obviously it didn’t ride like that, but he stepped up and did his job. He’s a very fast horse and he’s a good cross-country horse but he hasn’t been exposed to a lot of the stuff that he saw today, so I’m very proud of him,” said Dutton of Sea of Clouds who is contesting his first CCI4*-L.

Erin Sylvester and Campground rocketed up the leaderboard by crossing the finish line one second over the time. The pair were in 24th place coming into cross-country, but with time penalties flying they put their name up in the top.

“I was really happy with him,” said Sylvester of Marnie Kelly’s 12-year-old Thoroughbred gelding (Forest Camp x Kneel). “This is the first long he’s done in a year in a half. The last was Bromont in 2017. He is a super cross-country horse, but he had a mild injury last year, and I’ve been battling a little bit bringing him back with rideability. He loves cross-country so much, so he became a really strong horse this year to the point where I was not really able to go fast on him anywhere because I was just spending so much time setting him up. We did a different bit today, which was really strong for him. I think it suited him most of the way around.”

Sylvester shares the ride with Campground’s owner, Kelly, who is a longtime client of hers. Kelly competed Campground at the Training level in July at Full Moon Farm. Kelly bought him as a 3-year-old when she went to watch the World Equestrian Games in 2010, and Sylvester said that “he has an absolute heart of gold.”

Leslie Law moved up from second to the top spot in the CCI3*-L with a fast double clear round on Sally Cox’s 10-year-old Swedish Warmblood mare Zick Zack (Blue Hors Zack x Mercedes). Law is riding Zick Zack while her usual rider, Elinor O’Neal is pregnant with her first child.

“He’s strong and I was trying to go fast,” explained Dutton of his time penalties. “The rideability is still a work in progress, so I think he’ll learn from today. He’s a great jumper, but sometimes he’s not quick off the ground.”

Sitting in third place is Lauren Lambert and Fantastique who climbed up two spots from dressage by claiming one of only five double clears of the day. The 11-year-old Belgian Warmblood gelding (Toulan x Nikitona) came from Charlie Jayne as a 5-year-old after a failed show jumping career. “He was wonderful today,” she said. “He was on his minute markers all the way around. This is the first non-Thoroughbred that I’ve brought to this level, so I was waking up in the middle of the night concerned that he wasn’t fit enough or that he wasn’t going to be able to make time, but he was solid.”

The top five placings of the class are all within a rail of each other, so anything can happen after show jumping tomorrow. Even though he is a show jumping reject Lambert said, “It’s been a patient partnership and I’ve figured out his show jumping. Figuring out the flatwork out has helped with the show jumping . . . I dedicated a lot of my time to working for a Grand Prix show jumper in the states and then in Germany for an Olympic show jumper. So, if I can sit up and ride somewhat well I’ll feel good. I hope that we can handle the pressure.”

The placings remained unchanged after cross-country for the top nine riders in the CCI2*-L with William Coleman and Chin Tonic HS, Hyperion Stud’s 7-year-old Holsteiner gelding (Chin Champ x Wildera), keeping their lead on a 24.2.

Dana Cooke moved up from sixth to third with FE Mississippi, a 9-year-old Wurttemburg mare (Cassini II x Vorbuch 1), owned by the FE Mississippi Syndicate who is making her debut at the level. 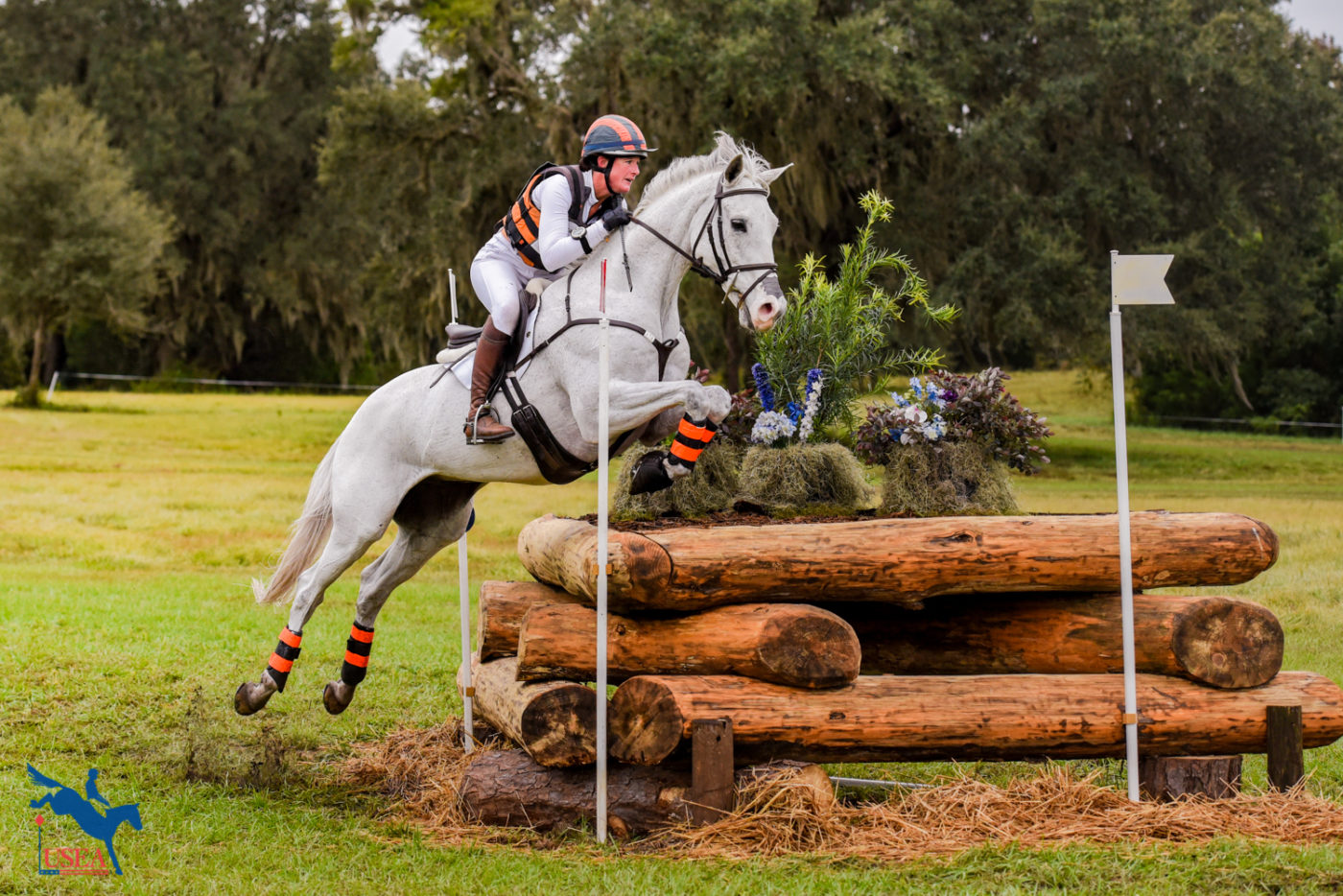 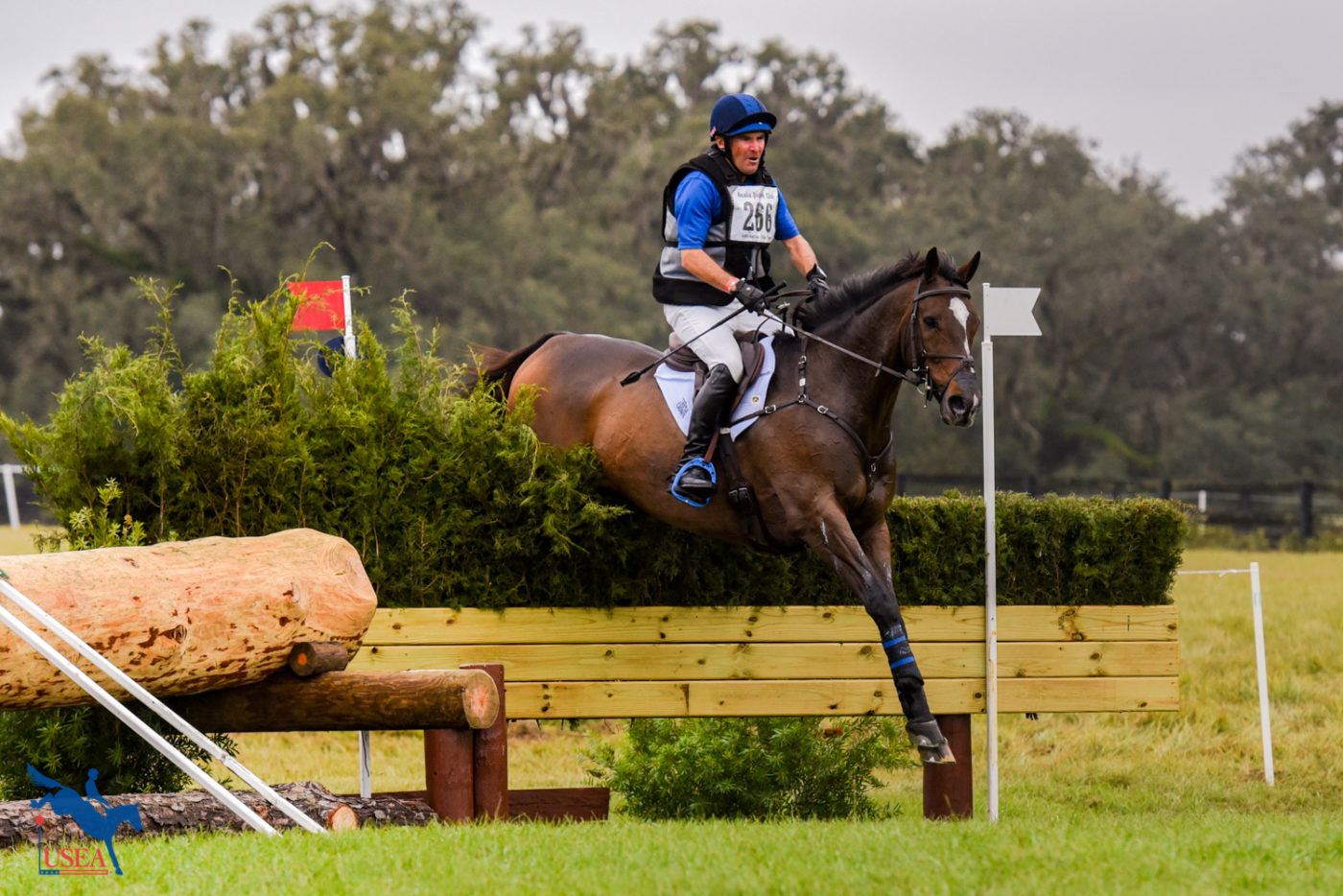 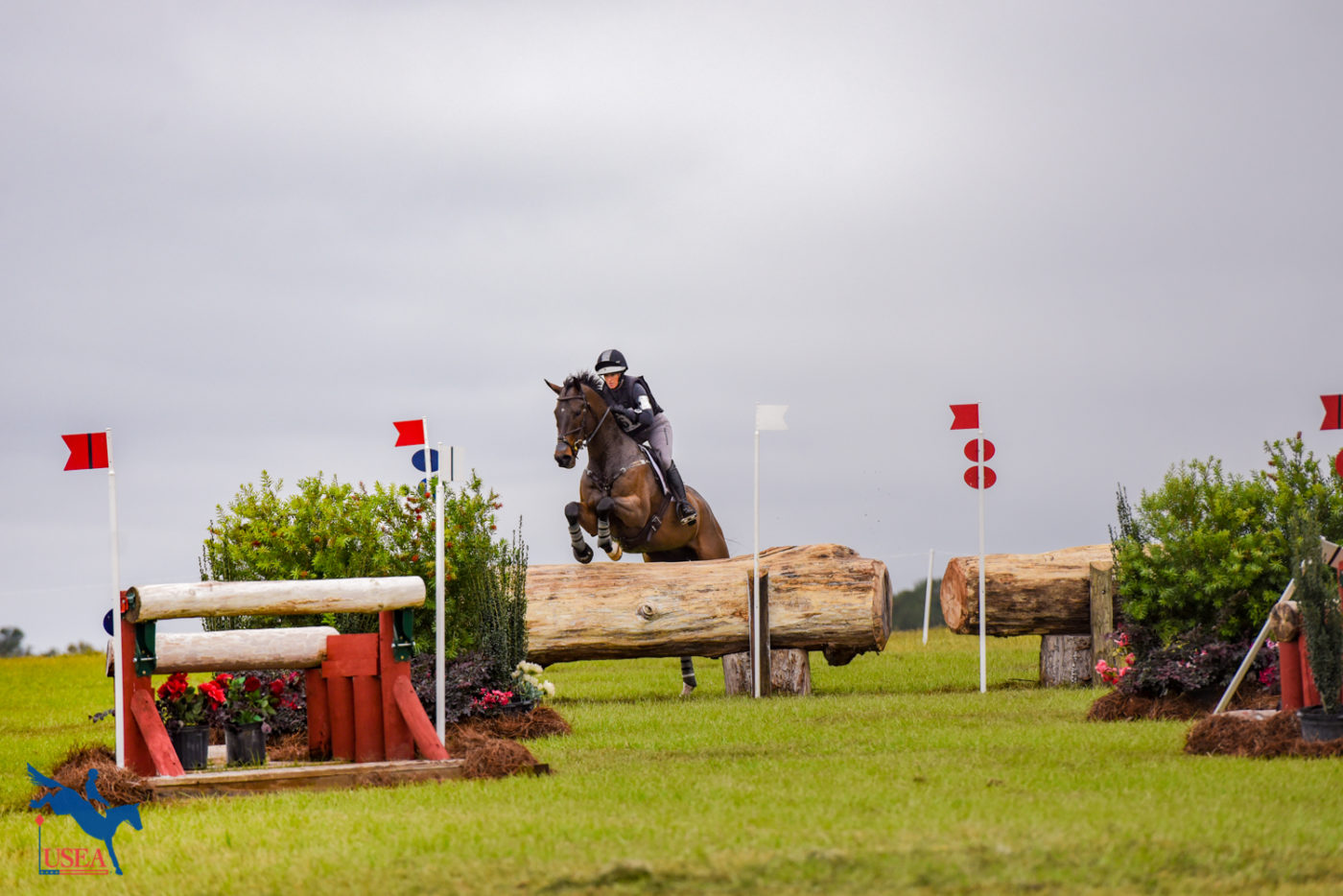 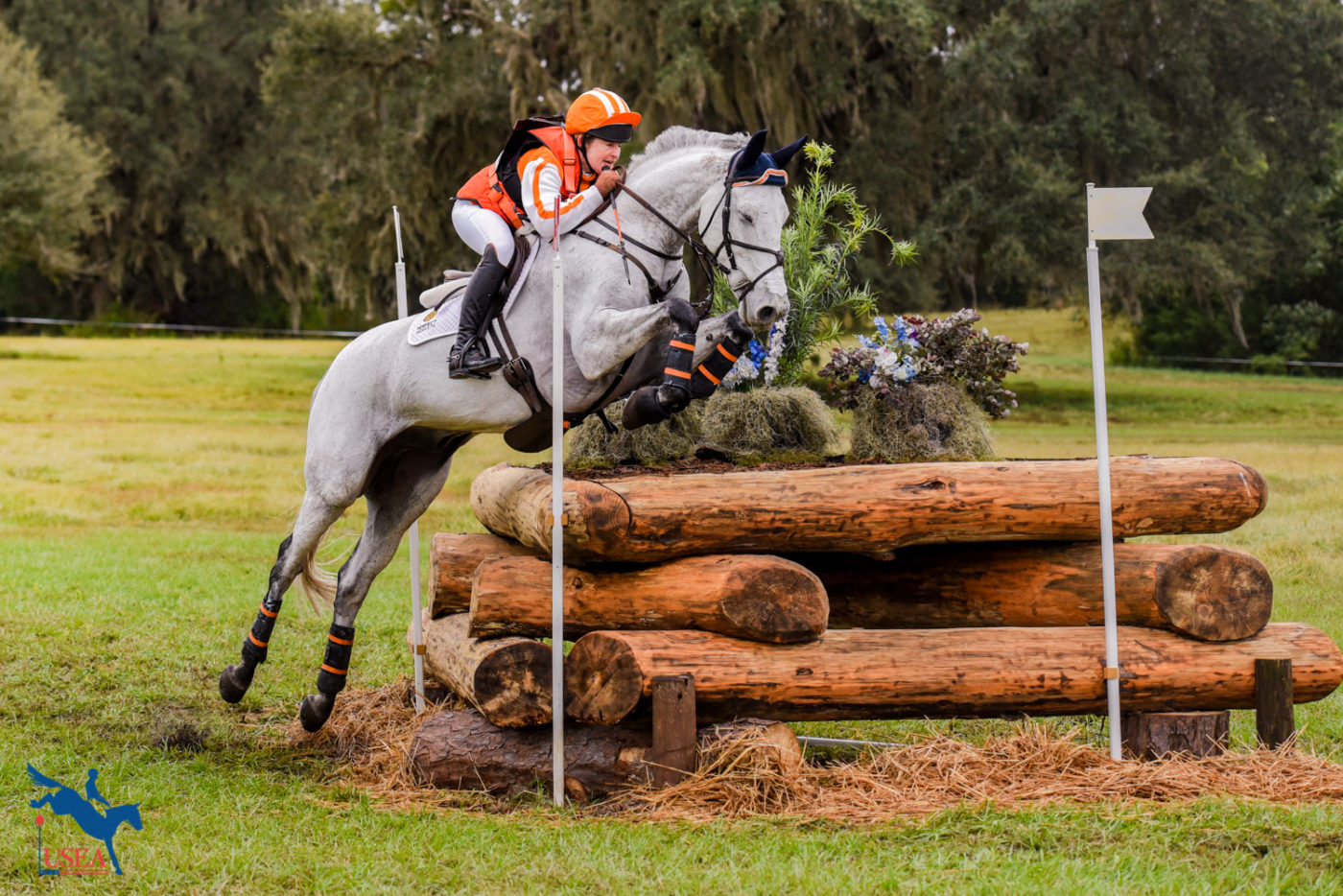 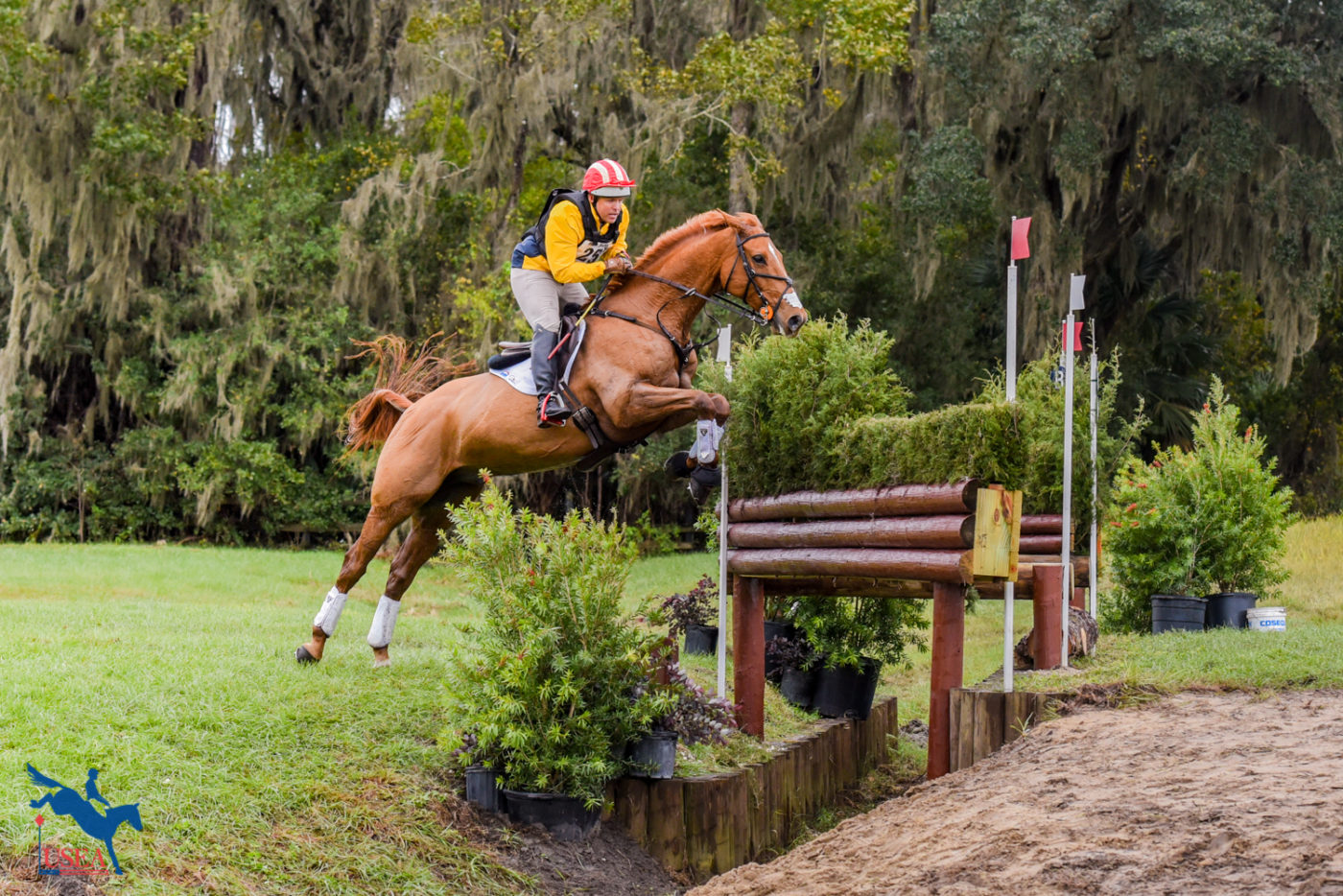 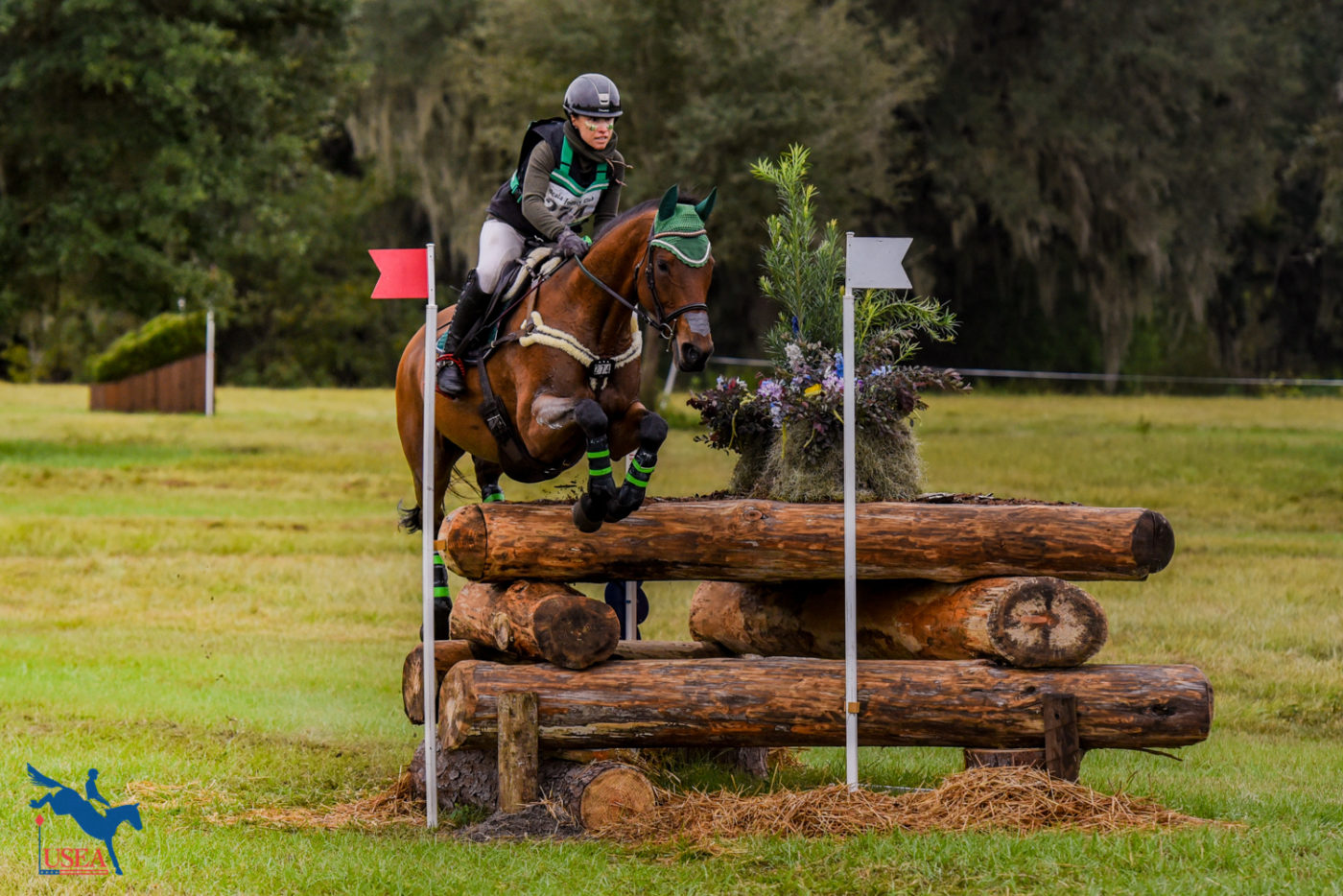 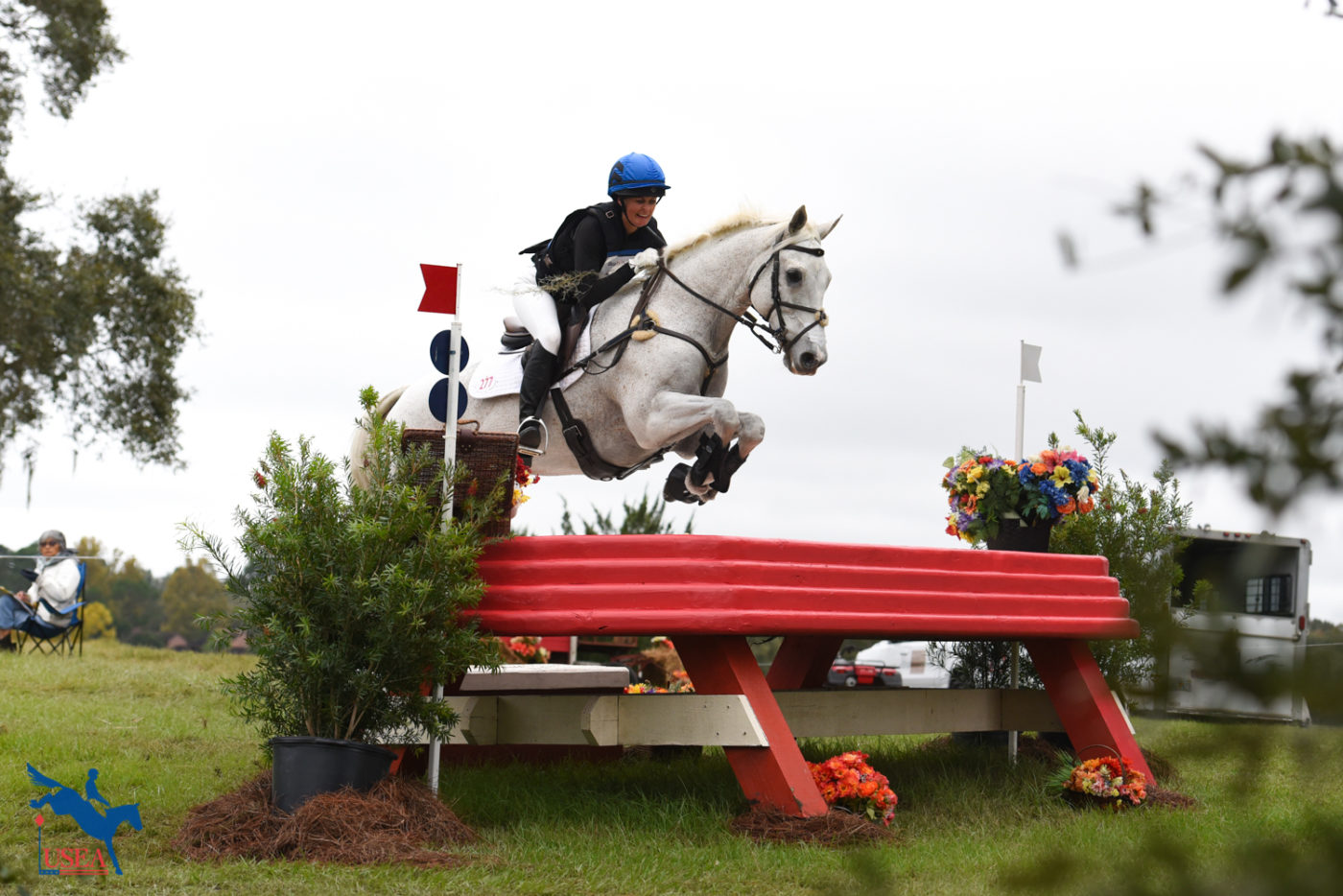 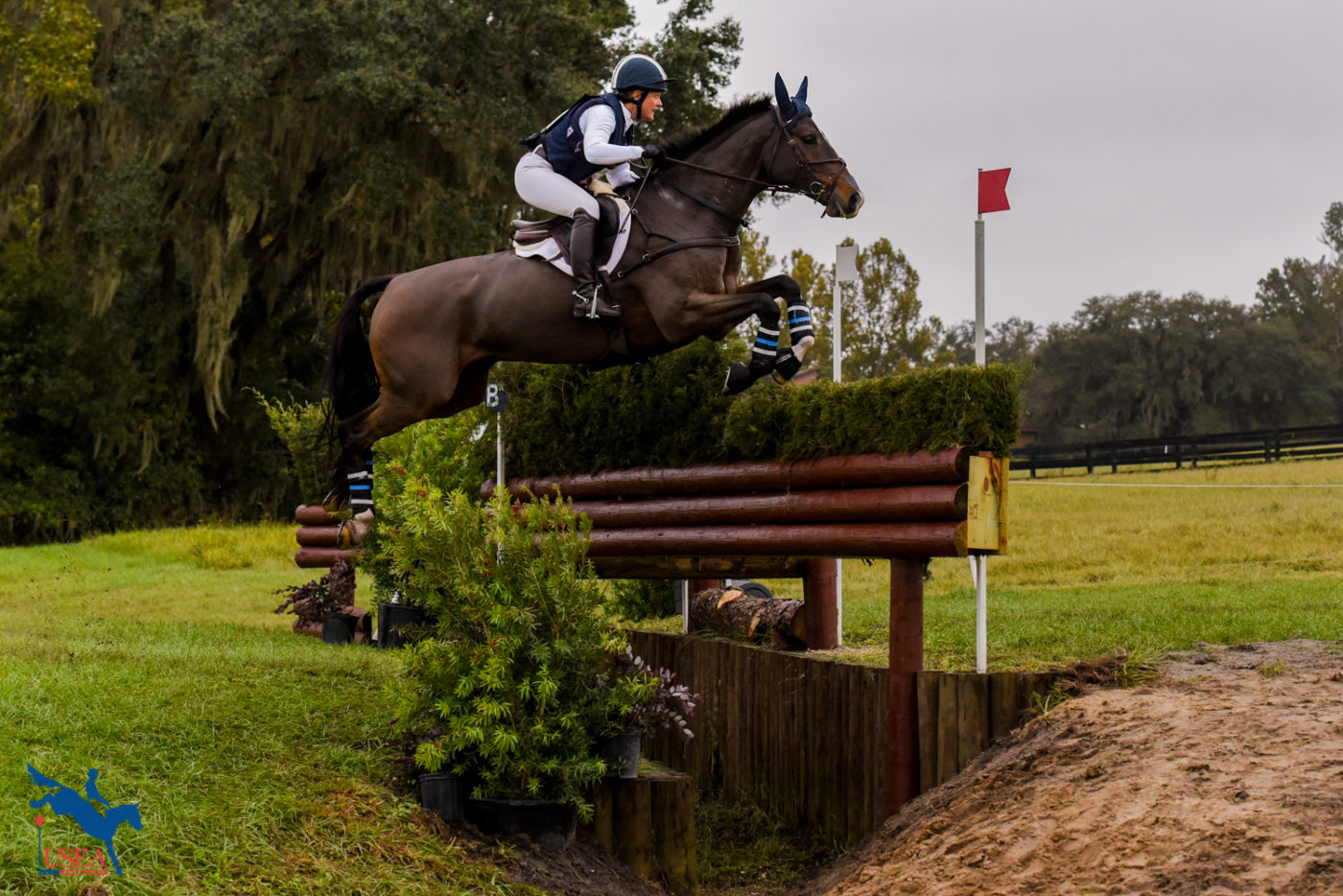 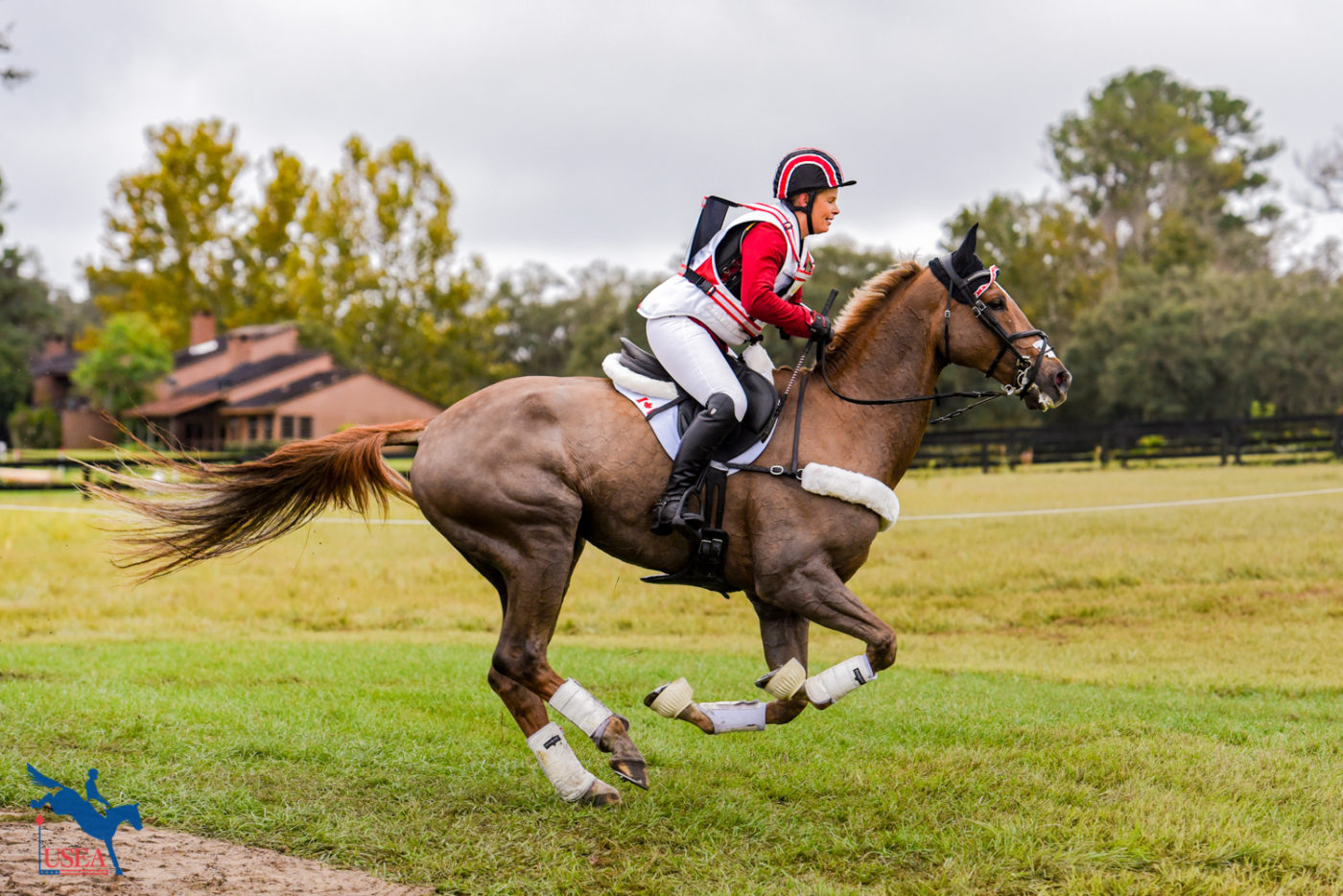 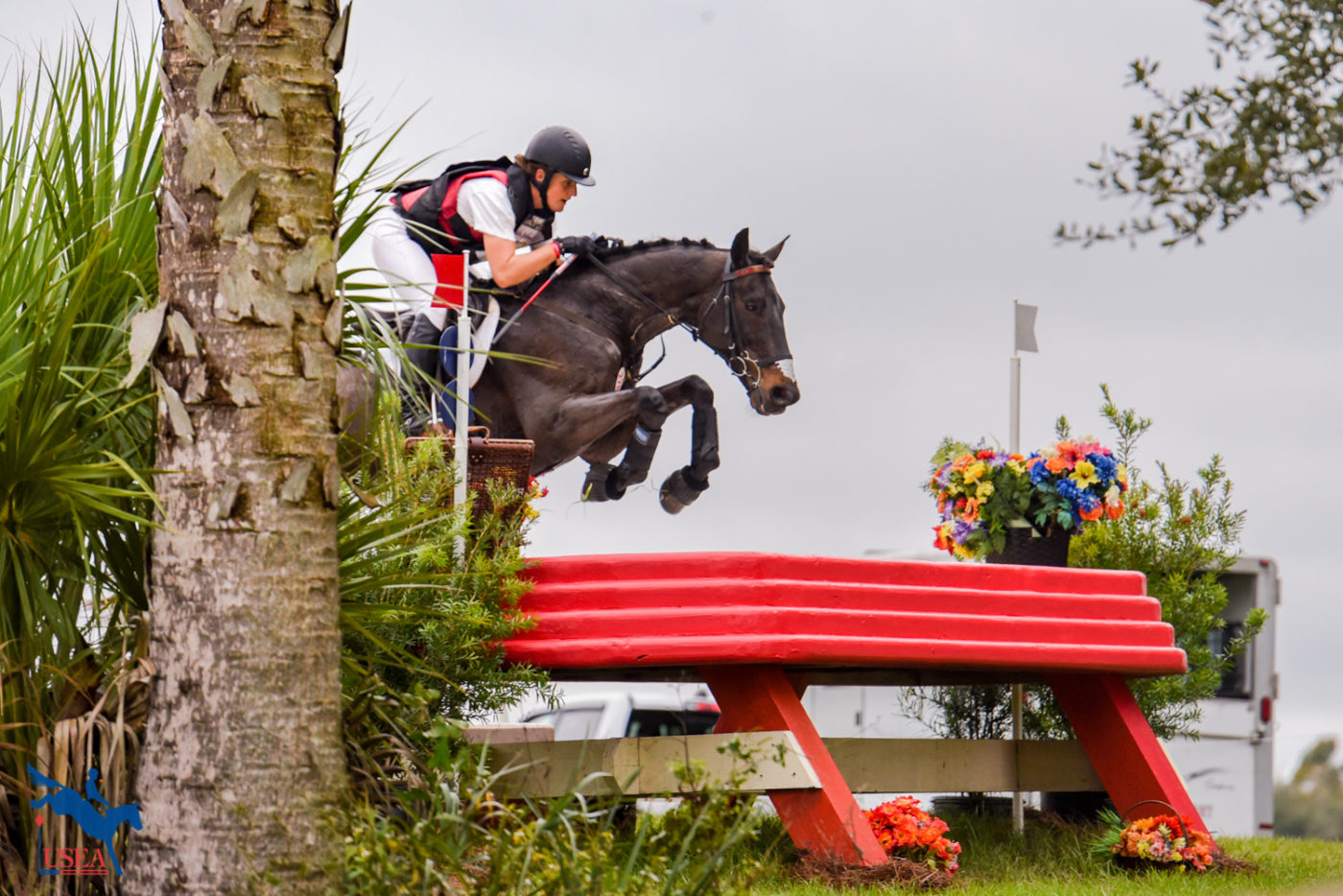