Dressage Sets the Stage for Comebacks at the $50,000 Mars Eventing Showcase

After a few days of record-breaking rain, wind, and storms that have left huge swathes of the country, and the eventing community in Aiken in particular reeling, it’s slightly surreal for eventers to find themselves in the midst of the Wellington Equestrian Festival in South Florida for the $50,000 Mars Equestrian Eventing Showcase. A gentle breeze, balmy temperatures, and perfect footing are not to be sniﬀed at, and the chance to ride the Land Rover Kentucky Five-Star dressage test and jump a big show-jumping course in atmosphere before attacking a shortened cross-country have all combined to attract a stellar field of eventers. Riding and training alongside the best pure dressage and show jumping riders in the world is also invaluable and delivers a daily dose of inspiration. No wonder everyone seems to love it here and despite the two-year hiatus, the Wellington Showcase is becoming a fixture and a destination event on the calendar.

Thirty-eight combinations completed the dressage phase Saturday under the covered arena at the Global Dressage Festival. At the end of the day, it was Marilyn Little and RF Scandalous who topped the leaderboard by a considerable margin after a mistake-free, forward-going test which scored a 19.4. The 15-year-old Oldenburg mare (Carry Gold x Richardia) came back after a year oﬀ in 2019, to compete at Ocala Jockey Club last November and has been in work ever since.

Watch the winning dressage test thanks to David Frechette:

“I didn’t let her down because I used [the Ocala Jockey Club] as the start of her season,” explained Little of Kitty who is owned by Phoebe and Michael Manders and Jacqueline Mars. “So, she’s been traveling back and forth from Wellington to Ocala to do a lot of gallops to really keep going with the fitness and do some cross-country schooling up there. I’ve taken her to some diﬀerent shows – she went to Venice one weekend and she showed here, so she’s been very busy. I haven’t really done any dressage with her since Ocala, so then that was the thing I was hoping was going to come together and it did.”

Little has been training on the flat with Swedish trainer Bo Jena who is here for the CDIs and who knows Erik Duvander well. “I don’t get to see Bo very often so that was very helpful. I won’t see him again until Kentucky. Erik was there and I got a lot of support from him in the warm-up area. I think that we are in a national program to really support the riders at every phase, and I felt an incredible amount from that today. I think it’s working –the scores seem to be improving so that was super, and everything really went according to plan with the way Erik and I had mapped it out.”

Boyd Martin rode the Syndicate owned Long Island T (Ludwig Von Bayern x Haupstsbuch Highlight) into second place on a 26.6 with a professional, expressive test. Despite just returning from injury Martin has maneuvered himself into a good position to grab a third Wellington title. The 14-year-old Oldenburg/Thoroughbred gelding is aiming for Kentucky or Luhmühlen this spring, his first attempt at the five-star, but he doesn’t have the best track record at the showcase.

“Last time he came here it was disastrous! But he’s come a long, long way since 2017,” explained Martin. “If I get past the third fence this year it will be an improvement!” Martin has looked to his fellow competitors in the other disciplines for inspiration, he talked about watching Steﬀen Peters win the Grand Prix Freestyle the night before and is planning on watching the five-star show jumping tonight. “And then hopefully we’ll nip around the cross-country tomorrow and get out of here!”

If you’re in the mood for a safe bet, perhaps you should save your money. “He’s a great horse,” said Martin. “I jumped him in the Mini Prix last weekend at Aiken and he jumped clean there, but there’s still a bit of a mission ahead of us. Cross-country looks twisty and tight and fast and furious. We won’t go for broke completely – you want to be competitive, but not to wreck him. It’s a long season ahead – it’s good to go well, but not at all costs.”

Today was the day of comebacks, and of course all the emotions attached to them. Canadian competitor Selena O’Hanlon has brought her long-time partner, John and Judy Rumble’s 17-year-old Foxwood High (Rio Bronco W x Evita II) back from an untimely injury just before Badminton last year that could have been career-ending and is sitting pretty in third place.

O’Hanlon admitted that everything they do together from here on in is icing on the cake. “So, whether it goes well or it goes badly, who cares? You’re here and you’re competing with the big boys and it’s just such a great experience. My smile started in warm-up and it went right on into the ring. I think that releases endorphins and that relaxation and that confidence in your horse travels down to him because he knows me so well and you get the results you want.”

Their test was poised and confident scoring a 27.4, and O’Hanlon was impressed with how calm Woody stayed in the ring despite being a good deal fitter than normal for this time of year. “The dressage today was great, he’s picked up where he left off. He’s a lot less anxious in the ring, he’s such a quiet horse on the ground that everybody just assumes he’s like that to ride but he’s not. At Great Meadow International he spooked at the cameras, he did a little spook today in the ring but it actually worked to our advantage and it made him more expressive in his medium trot. To be able to come here a couple of days early and work with Christilot (Boylen) was great, I haven’t seen her since we were getting ready for Europe so that was really helpful and we had training camp right before we came down, so we were all building up to getting down here, and here we are.”

“We’re just getting into the season, but it’s nice to start with a horse that’s rideable so that you can go for those extra points just by turning the volume up a little bit each test you ride, you can keep going for more expression and more energy and more collection so I was super- duper pleased with him today, I couldn’t be happier,” she continued.

“I was super excited to come here because the atmosphere is enough that it gives you a baseline of how they’re going to be when you take them to some bigger events, and they treat you and your owners really well down here. And I love the food - I’m famous for going from event to event by how good the food is! It’s pretty amazing here,” she said.

From here O’Hanlon is hoping to follow roughly the same track as last year, competing in the Red Hills CCI4*-S before heading to Europe for a month and hopefully tackling Badminton.

Five horses have been withdrawn overnight and only 10 penalties stand between 2nd and 30th positions. The competition resumes tomorrow with show jumping at 10:30 a.m. in reverse order of go. Cross-country will finish the weekend beginning at 1:30 p.m. 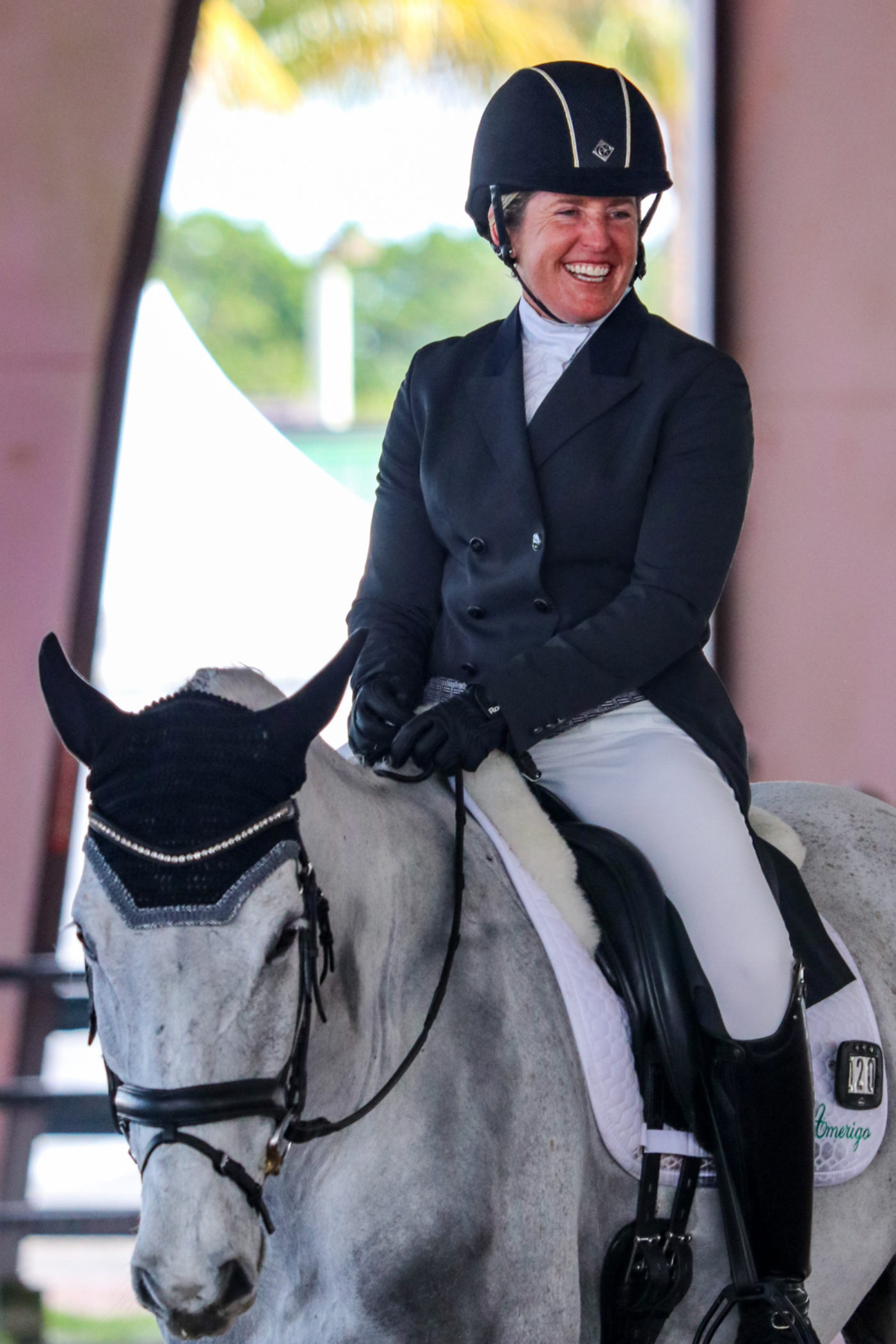 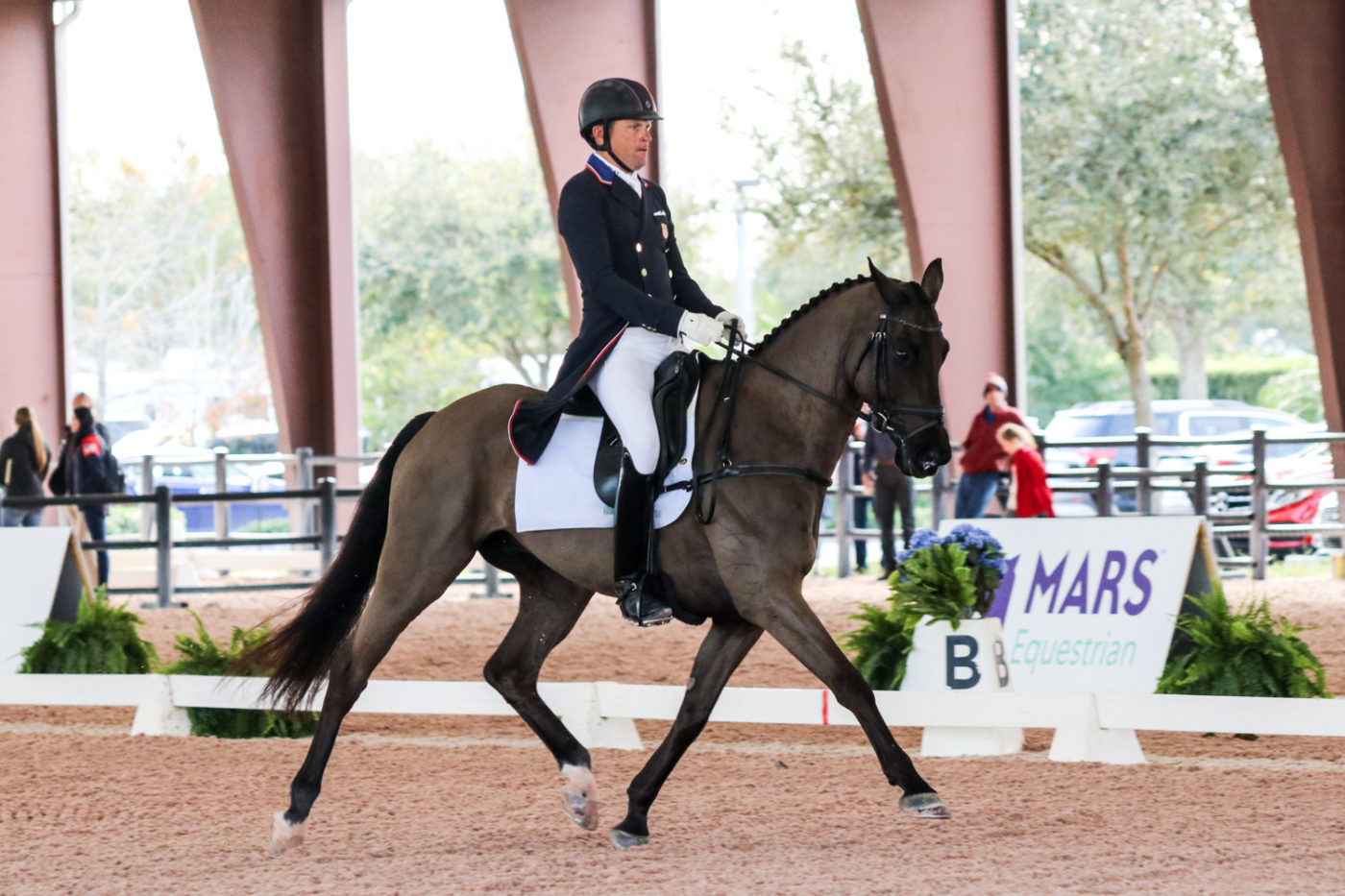 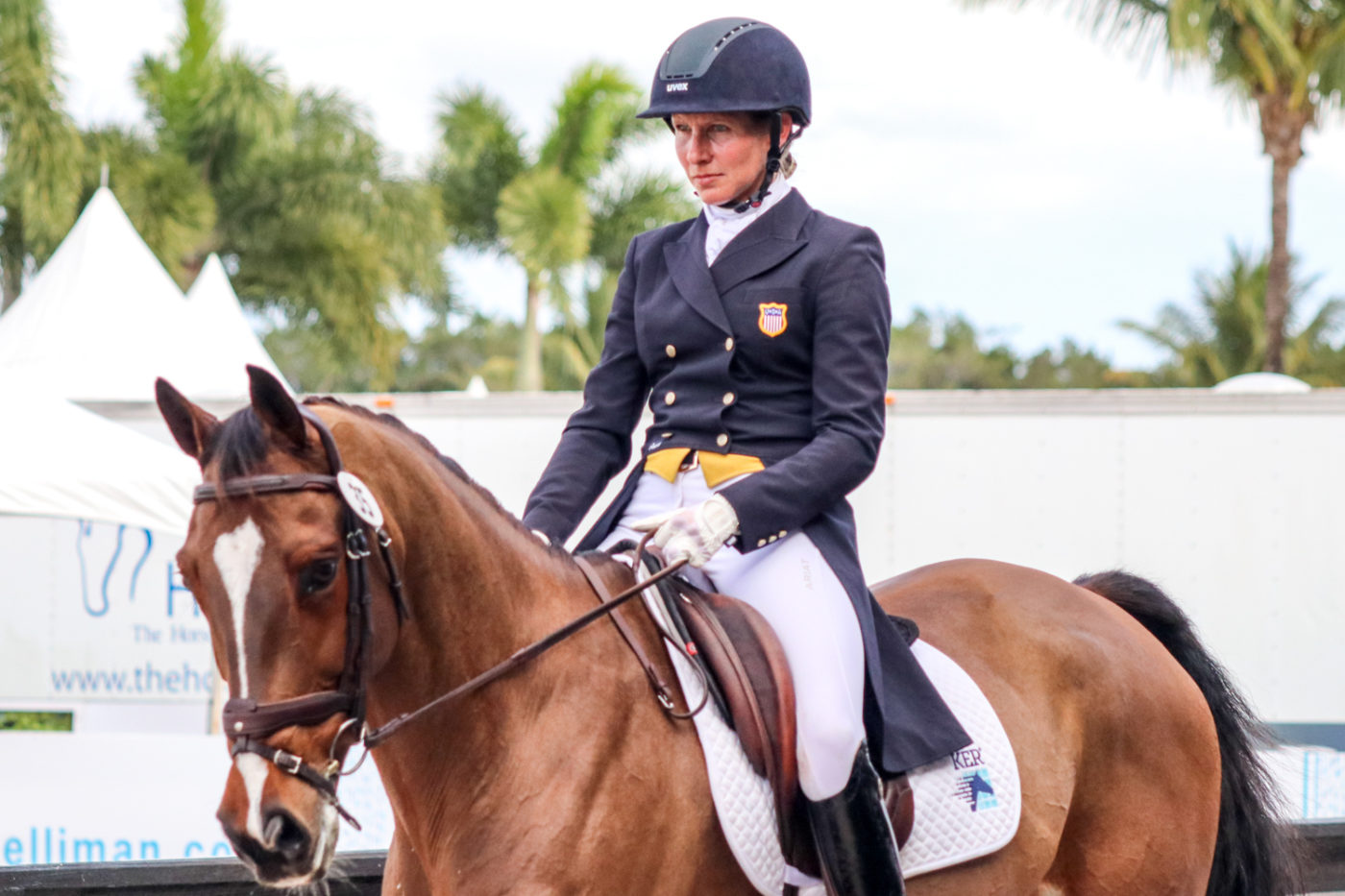 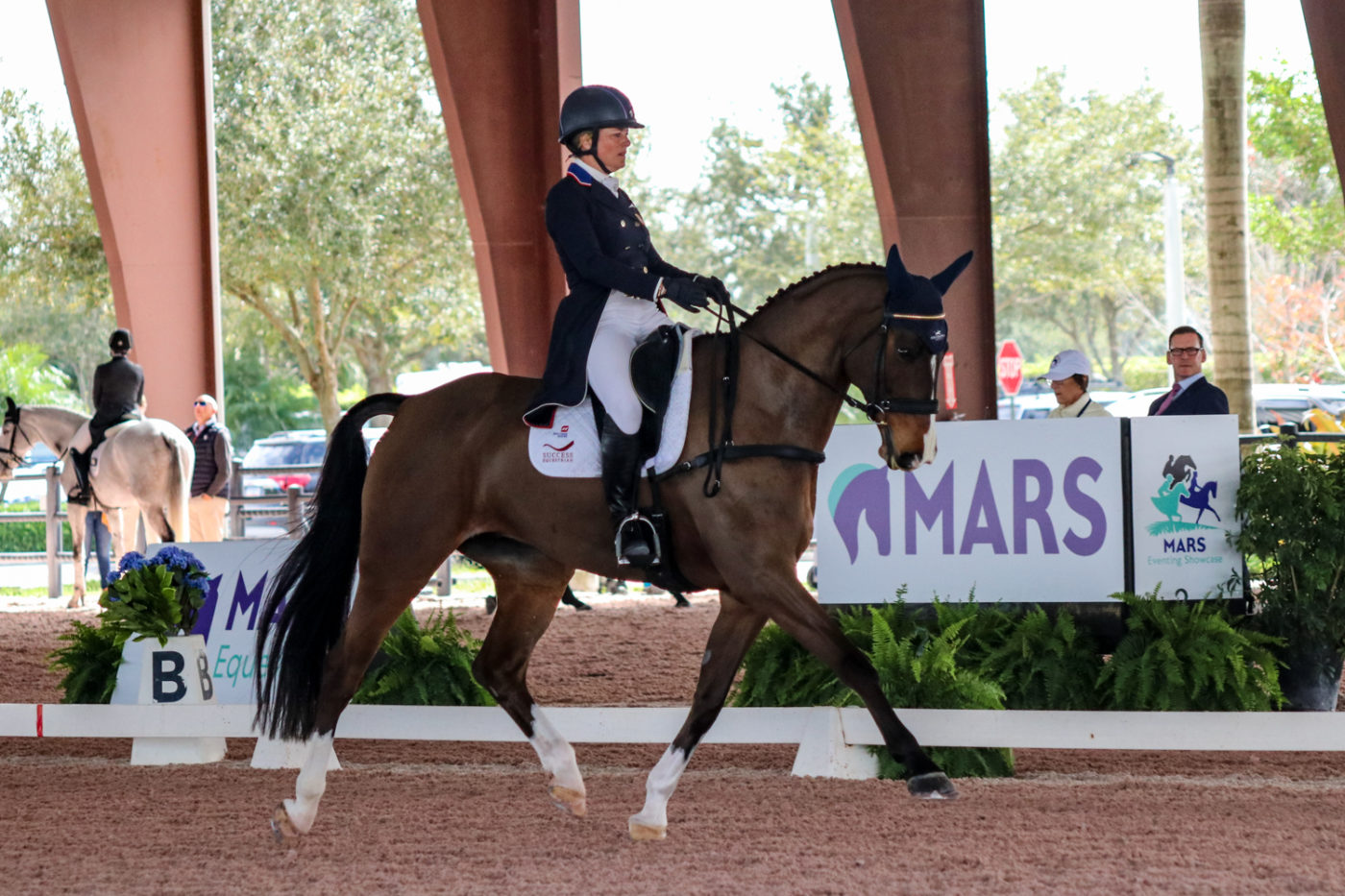 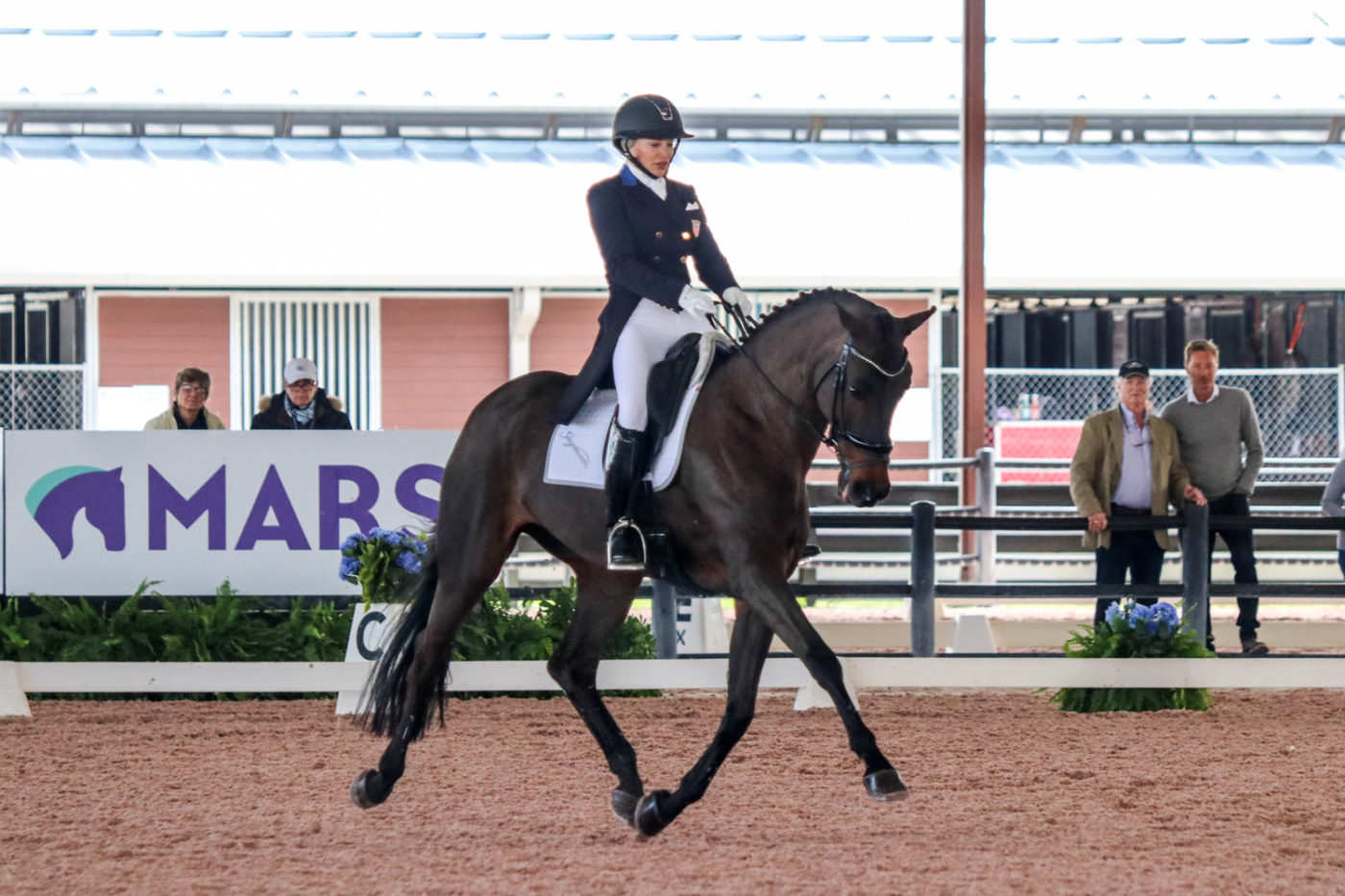 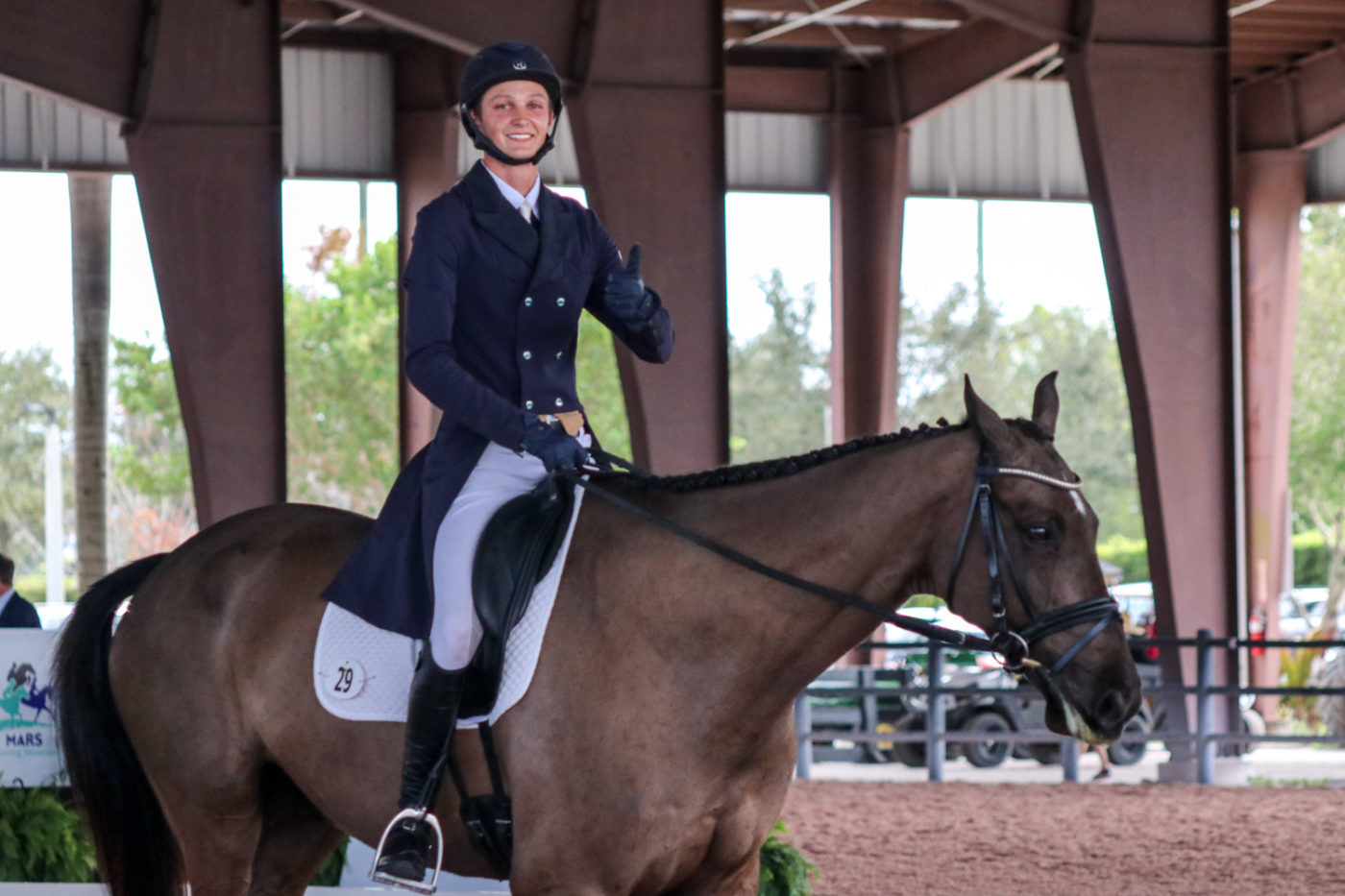 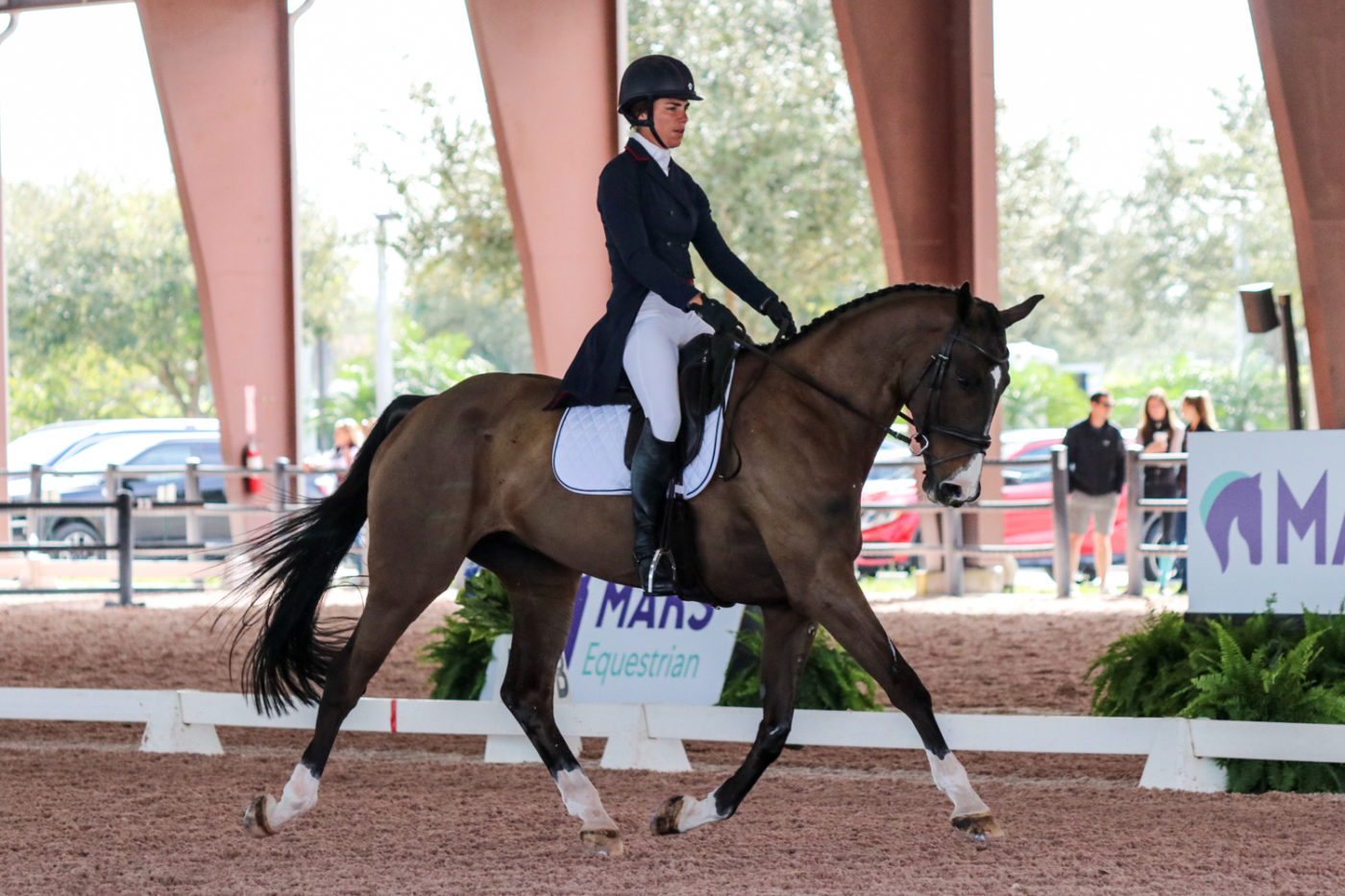 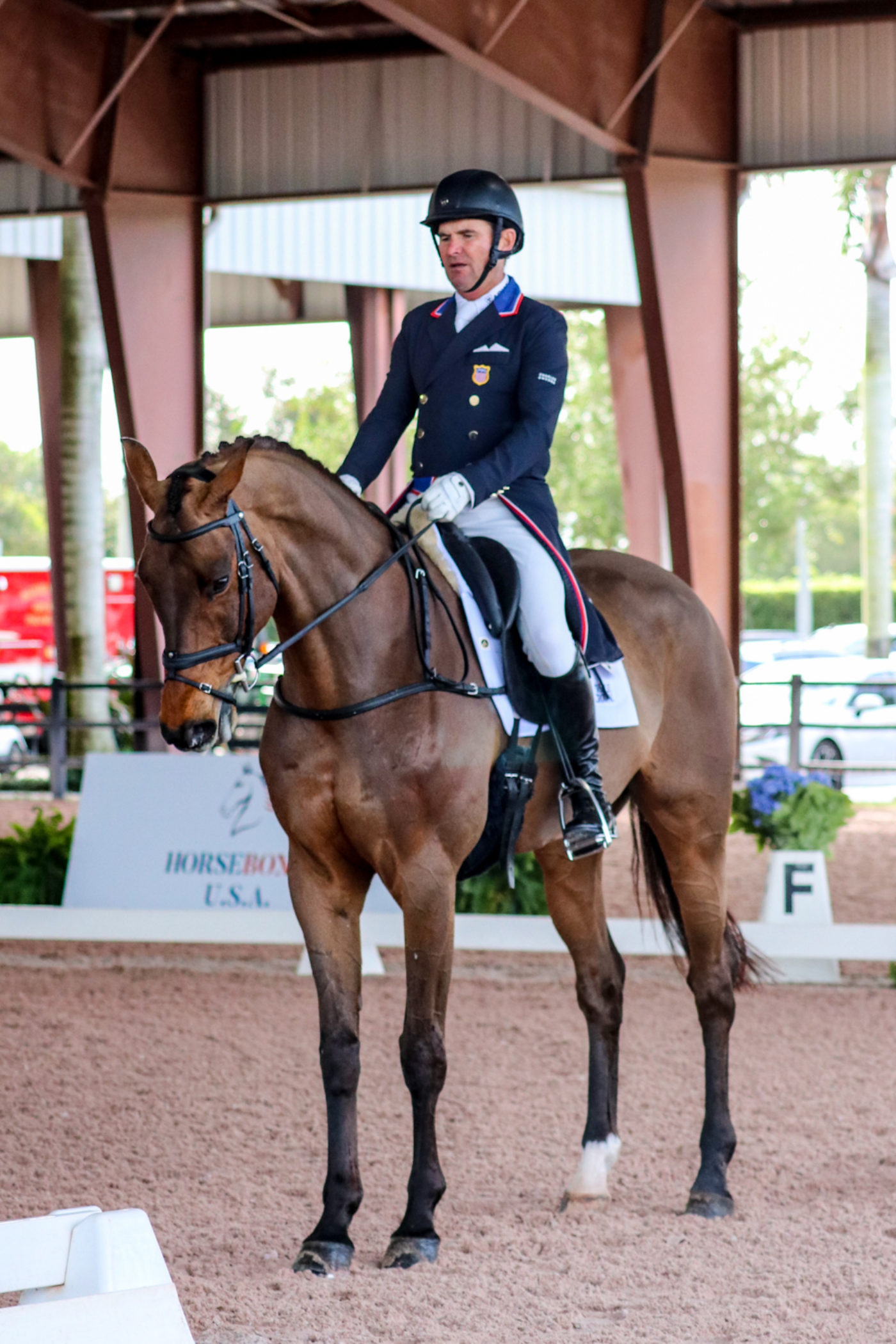 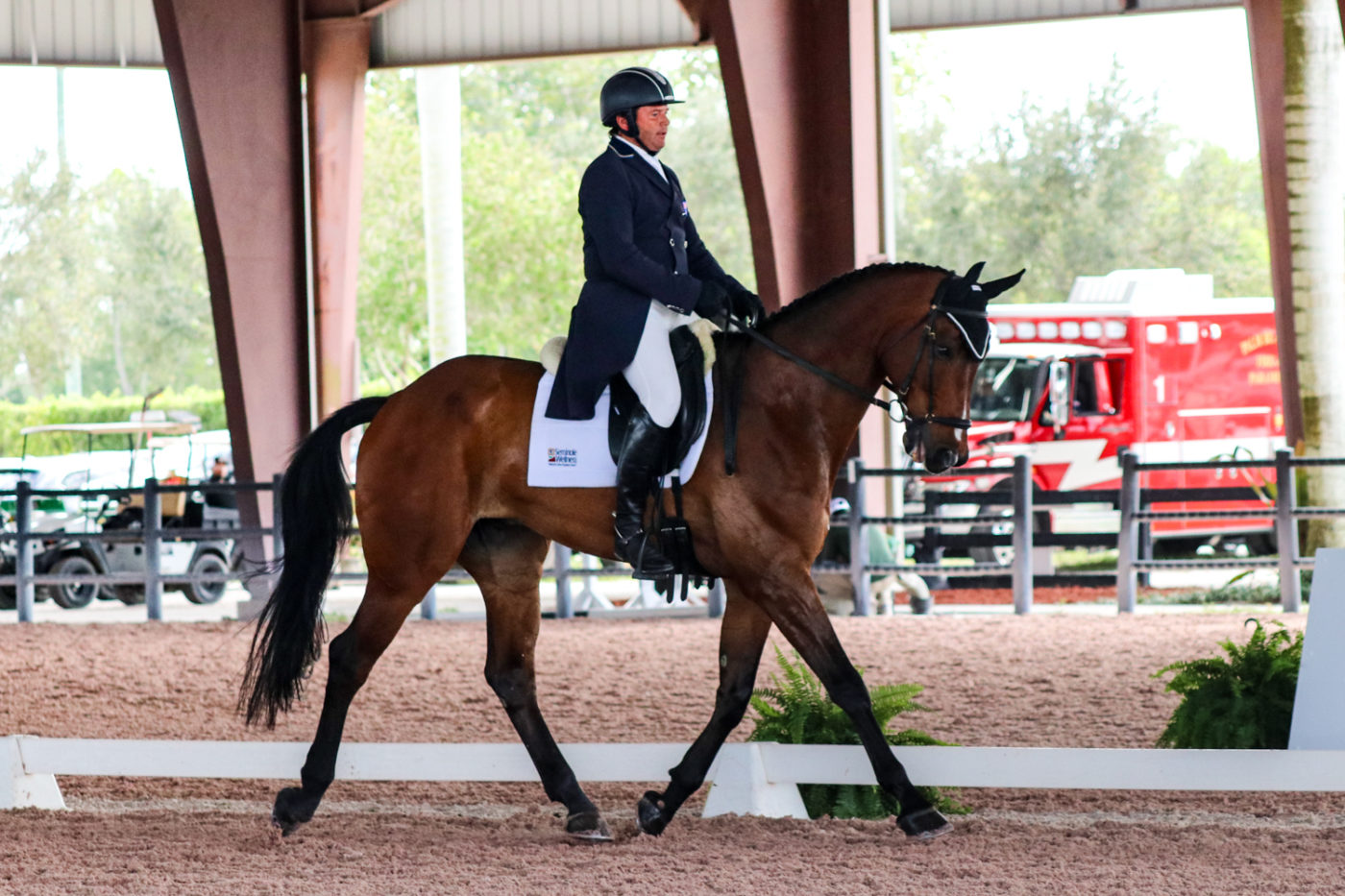