Twenty of the 26 pairs entered in the CCI3* at the Jersey Fresh International Three-Day Event performed their dressage tests in front of Andrew Bennie (NZL), Jane Hamlin (USA), and Gretchen Butts (USA) this morning at the Horse Park of New Jersey in Allentown, N.J. Jessica Phoenix and Pavarotti (Pavarotti Van de Helle x Fidelia) took the early lead in the division on a score of 28.5 and no one could quite catch up with them.

Phoenix and Don Good’s 16-year-old Westfalian gelding have been partnered together since 2011, but she felt that this was one of the best tests of Pavarotti’s career. “He felt relaxed," Phoenix said. "He felt like he kept his hind legs underneath him more this test than in previous tests. But he’s just so excited to be here and he feels so fit and so ready to go so I’m pretty pumped."

“Pavarotti really has been the horse of a lifetime for me,” Phoenix commented. “The things that horse has done for me and the teams he’s ridden on; he’s just been so competitive every time out for me. To bring him to Jersey and have him feel this fit and ready to go is pretty exciting. When you’ve been around that many courses on a horse you definitely feel like they’re your best friend and you know each other inside and out. On cross-country, anything can happen any day but you feel really confident leaving the start box on that horse.”

Phoenix didn’t come to Jersey Fresh last year, so she didn’t have the opportunity to see what changes Captain Mark Phillips made to the course when he came on board as course designer. “I think it really flows nicely at the start,” she remarked. “It gives them something to do and they can just get into the rhythm before you start doing circles later. There’s a lot of turning and a lot of circling back on yourself towards the later part of the course but there’s a lot of really good questions out there and I think the way they’ve used the hills the fitness will be really important this year.”

In second place is Boyd Martin and The Ray Price Syndicate’s 10-year-old Thoroughbred/Dutch gelding Ray Price (Raise a Stanza x Fair Fiona) on a score of 29.1. Martin’s homebred is making his debut at the CCI3* level this weekend after two Advanced level events and a CIC3* earlier this spring.

"He’s very green," remarked Martin. "This is only his fourth event [at the level]. It’s probably a little bit premature getting him to this level but I knew it would be a good track and he’s really coming on. I think he’s going to be a really good horse for the future. He was green and wiggly in the test and there’s lots of improvement to be made, but I think he’s all class.”

“I was secretly hoping [Jersey Fresh] would be easier than Bromont,” quipped Martin about choosing Jersey Fresh for Ray Price’s first CCI3*. “I’ll probably not go to the wall on him cross-country day, although he’s a fast horse, but really just take my time and let him look at all the complicated stuff and then by the end of the year at Fair Hill I think he’ll be a genuine, proper three-star horse. If that all goes well, I think he’ll be good to go up to [four-star] for next year.”

Martin not only bred Ray Price, but also his dam, Fair Fiona, and her dam, Banjo’s Word, and has Ray Price’s 2-year-old sister back home at Windurra. “I was there when he was born in Australia and shipped him over as a 3-year-old," explained Martin. "To get him all the way through to this level is a wonderful sense of achievement, but we still got a lot further in his career to go.” Martin describes Ray Price as being a bit quirky, and said that trait runs in the family. “He’s about 80 percent Thoroughbred and he’s quite a cuddly horse, but you wouldn’t want to take your raincoat off when you’re riding him; he’s quick and he’s got a flinch in him. But he’s a real modern three-day event horse; he’s got speed, he’s got movement, he’s got heaps of jump, he’s young, and he’s sound. I’m pretty excited about him.”

Waylon Roberts and Lancaster, Michelle and John Koppin’s 11-year-old Canadian Sporthorse gelding of unknown breeding, round out the top three on a score of 30.8. Roberts started the gelding as a 4-year-old before the horse was sold to Boyd Martin. When Lancaster came available for sale in 2016, Roberts worked with the Koppins to purchase the horse and retake the ride on him.

“He was a good boy,” praised Roberts of Lancaster's performance today. “He didn’t like the corner at K, so we lost a few marks there, but the horse just comes out of his stall in the right outline and shape, so it’s just trying to put all the movements together in a row. He was super today.”

“I think there’s plenty of challenges out there,” remarked Roberts on the track Captain Mark Phillips has laid out for the three-star competitors, “but I think Mark’s done a good job with setting it to get some of these younger horses around. I’m looking forward to tackling it on Saturday, but I’ll be walking it a few more times between then and now.”

Just 11 of the 41 entrants in the CIC3* danced in the sandbox in this afternoon with the remainder of the field going tomorrow. Clayton Fredericks and FE Bowman were the last pair into the arena this afternoon and they ultimately took over the lead with a score of 30.1.

The 10-year-old Wurttemberger gelding of unknown breeding owned by Fredericks, Amanda Bernhard, Diana J. Crawford was originally imported by Fredericks as a sale horse as a 5-year-old. However, he ended up being quite strong to ride. “There weren’t many people that felt comfortable riding him, just because he’s so powerful and big and strong, so he ended up with me,” explained Fredericks. “It seems like he’s been around for awhile, but he’s still quite green at the three-star level. We’ve got some bits to iron out and get right . . . but he’s well capable of doing it.”

“[Dressage] is a good phase for him,” commented Fredericks. “He was a bit tense today, I didn’t give him as much [warm-up] as I normally have, so he was a little bit tense and we made one little error, which is a bit unusual for him. It’s a bit of a hard arena for him because he’s such a looky horse, so being so close to the side, it’s not good for his relaxation . . . I just have to rely on the training with him and that always gets him through.”

Caroline Martin and Danger Mouse, her own and Sherrie Martin’s 10-year-old Warmblood gelding by Kannan, led the division for most of the afternoon on a score of 30.6 and lie in second place overnight in the CIC3*.

Boyd Martin and Steady Eddie (Jetball x Tudnela), Pierre Colin, Denise Lahey, and George and Gretchen Wintersteen’s 15-year-old Australian Thoroughbred gelding, sit in third place on a score of 31.2. Martin and Steady Eddie rerouted to Jersey Fresh after their weekend at the Land Rover Kentucky Three-Day Event ended early. The pair picked up 20 penalties at the C element of fence 6, the Park Question, and elected to retire.

Dressage will resume tomorrow morning for the CCI3* at 8:30 a.m., followed by the remainder of the CIC3* division beginning at 9:15 a.m. 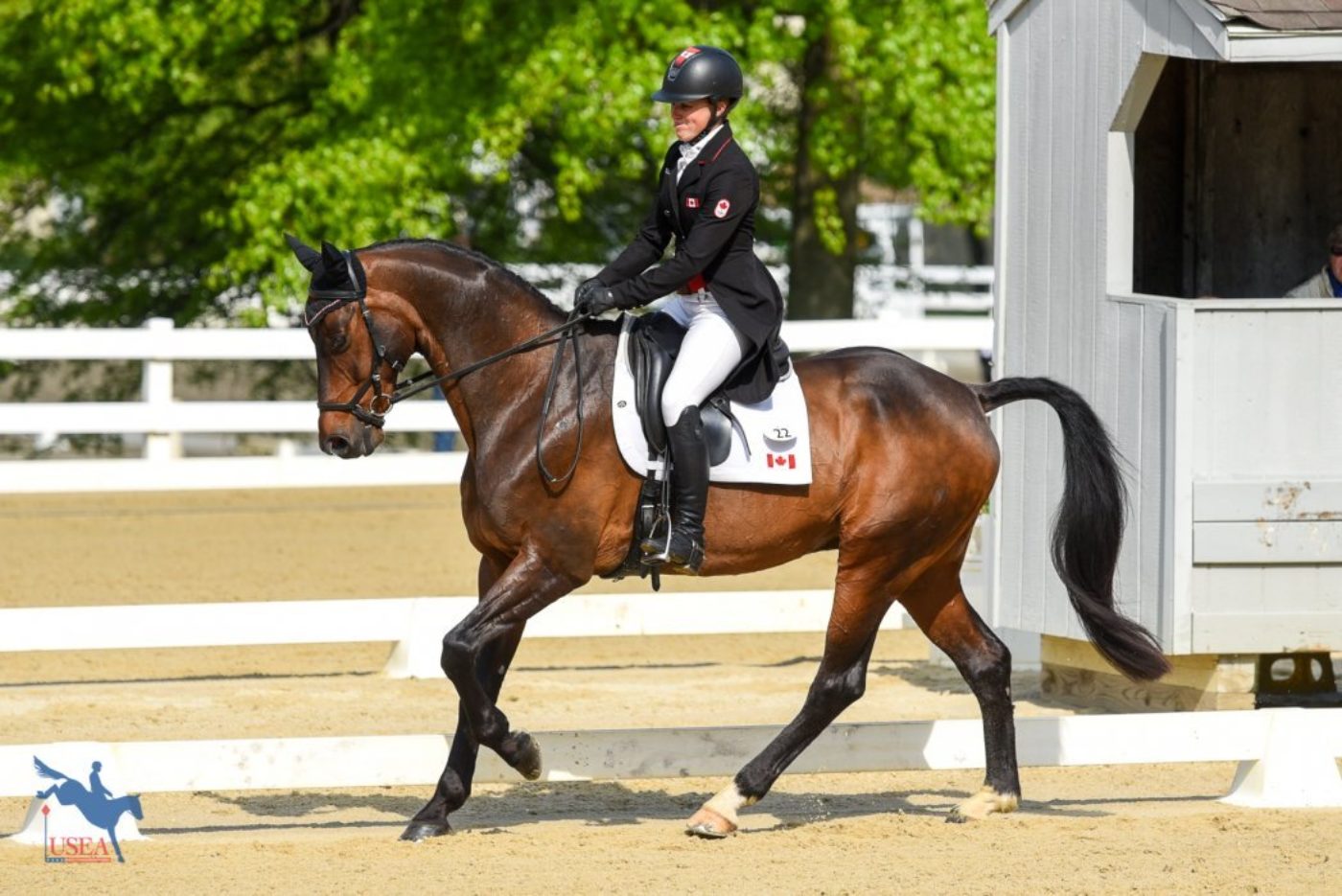 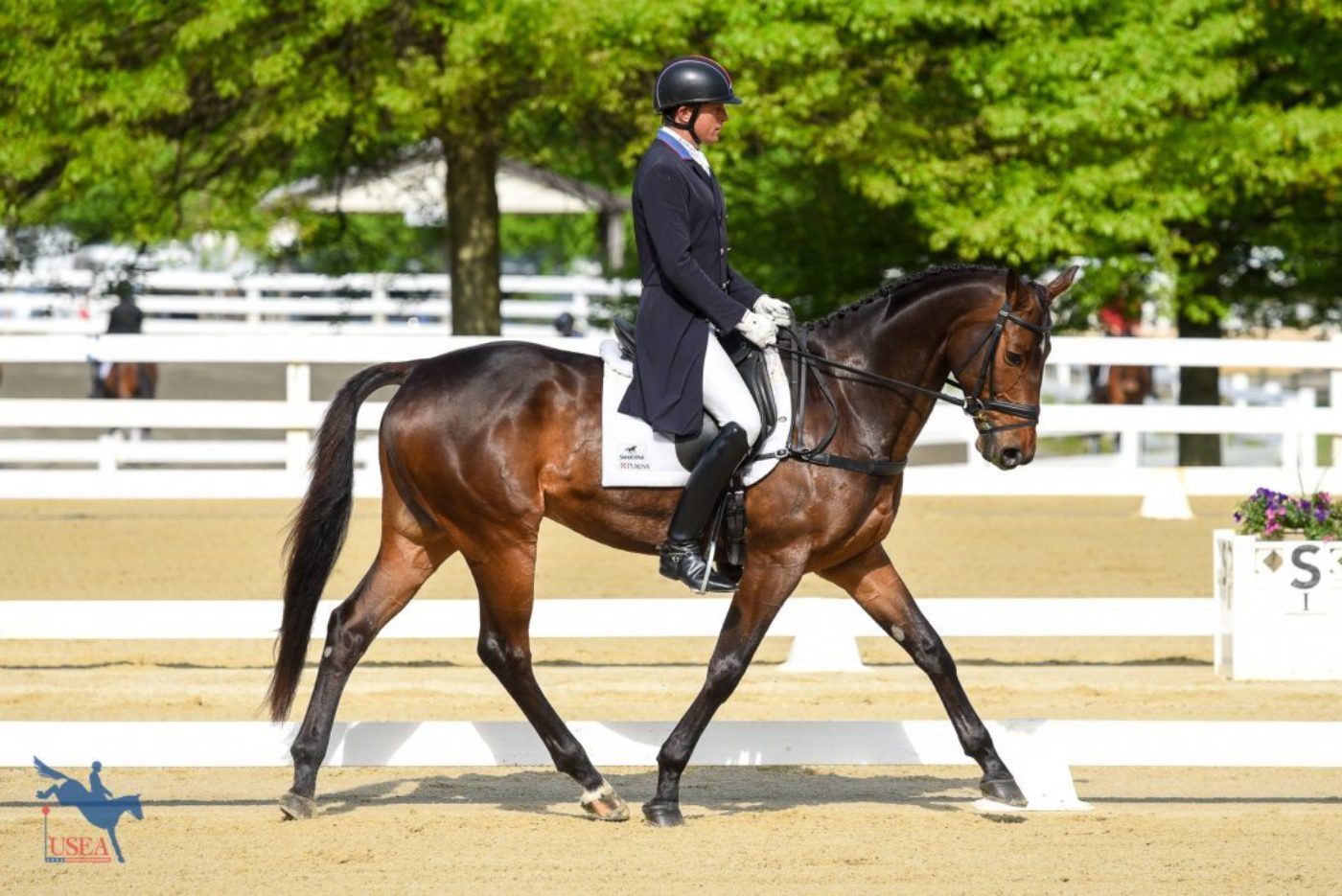 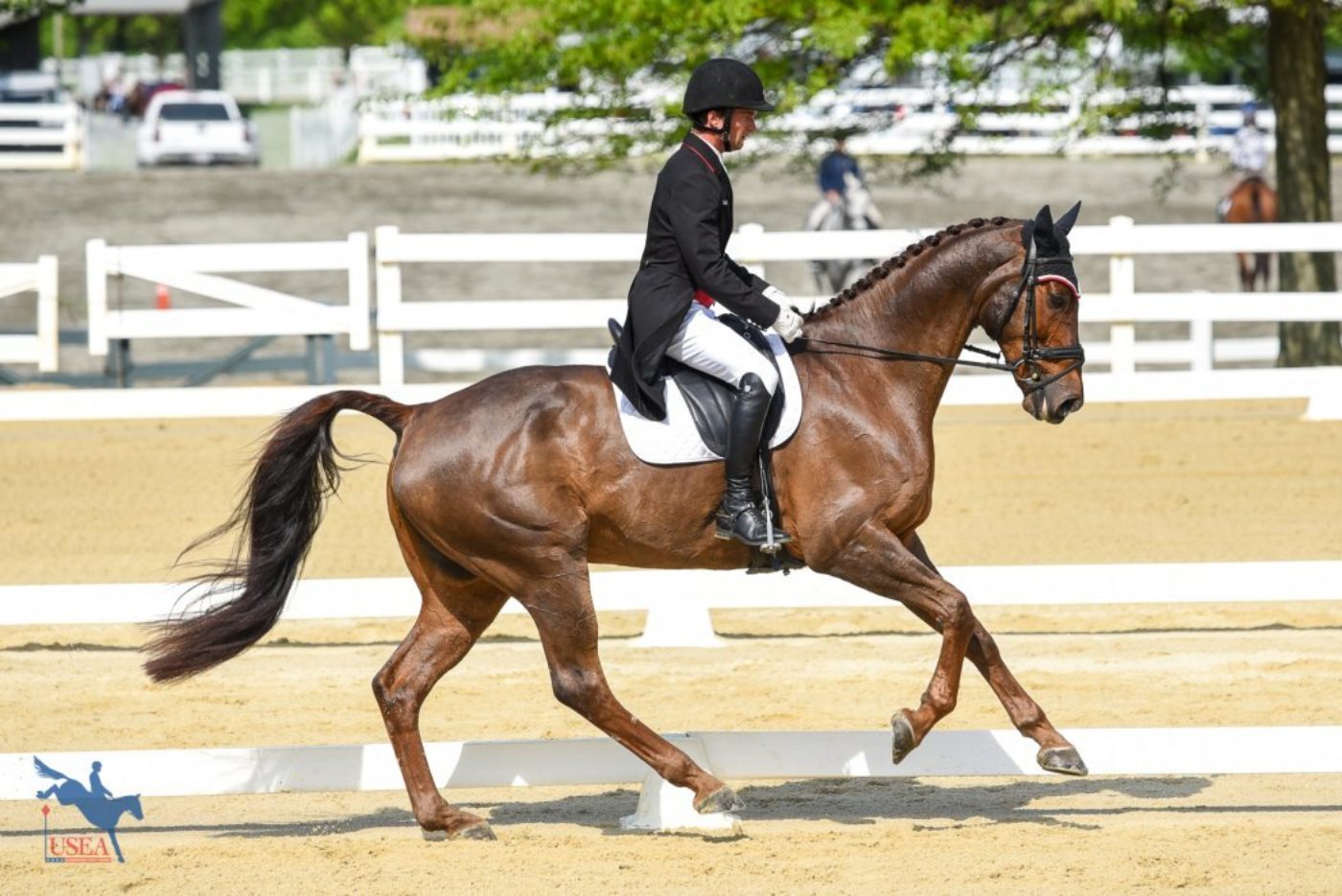 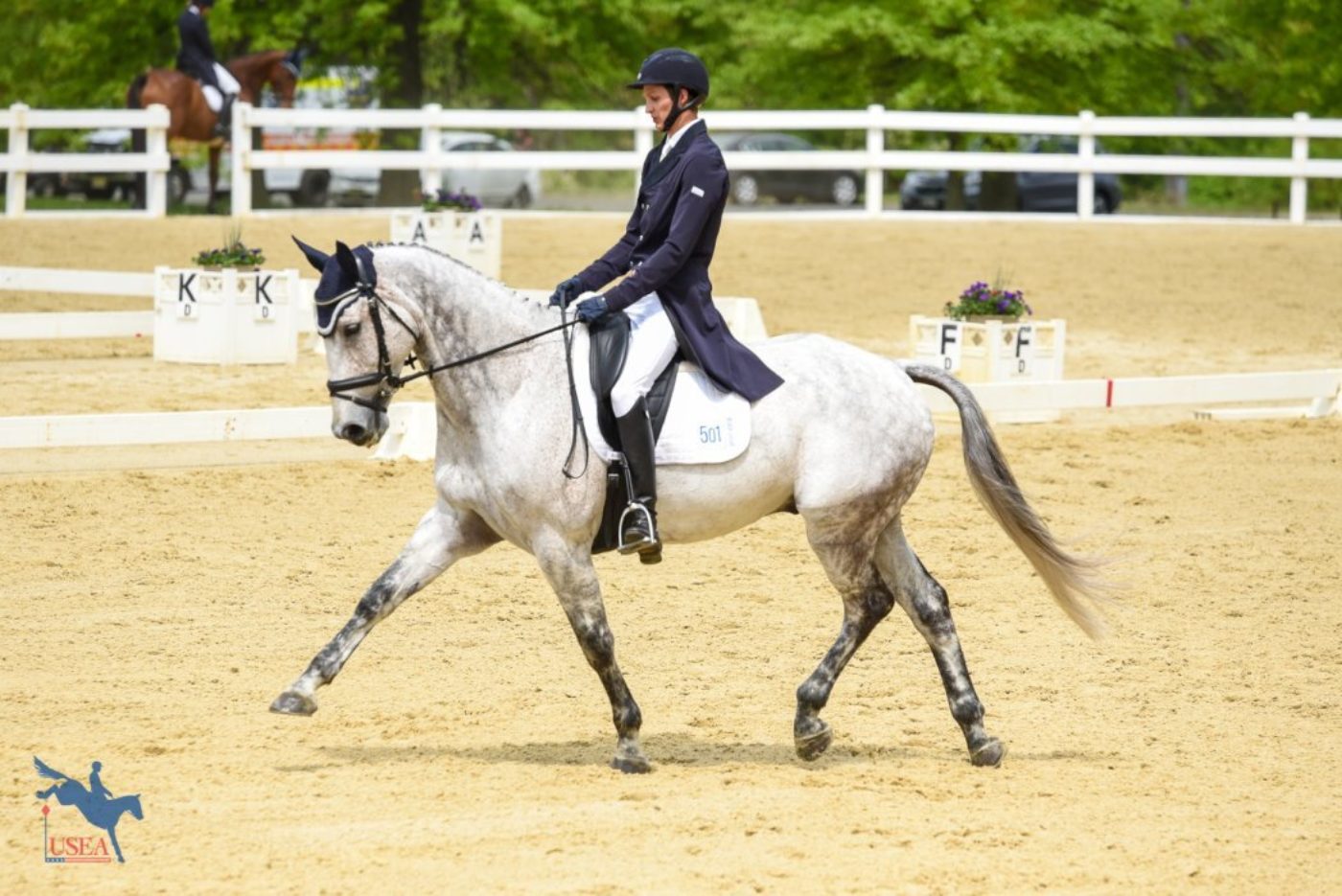 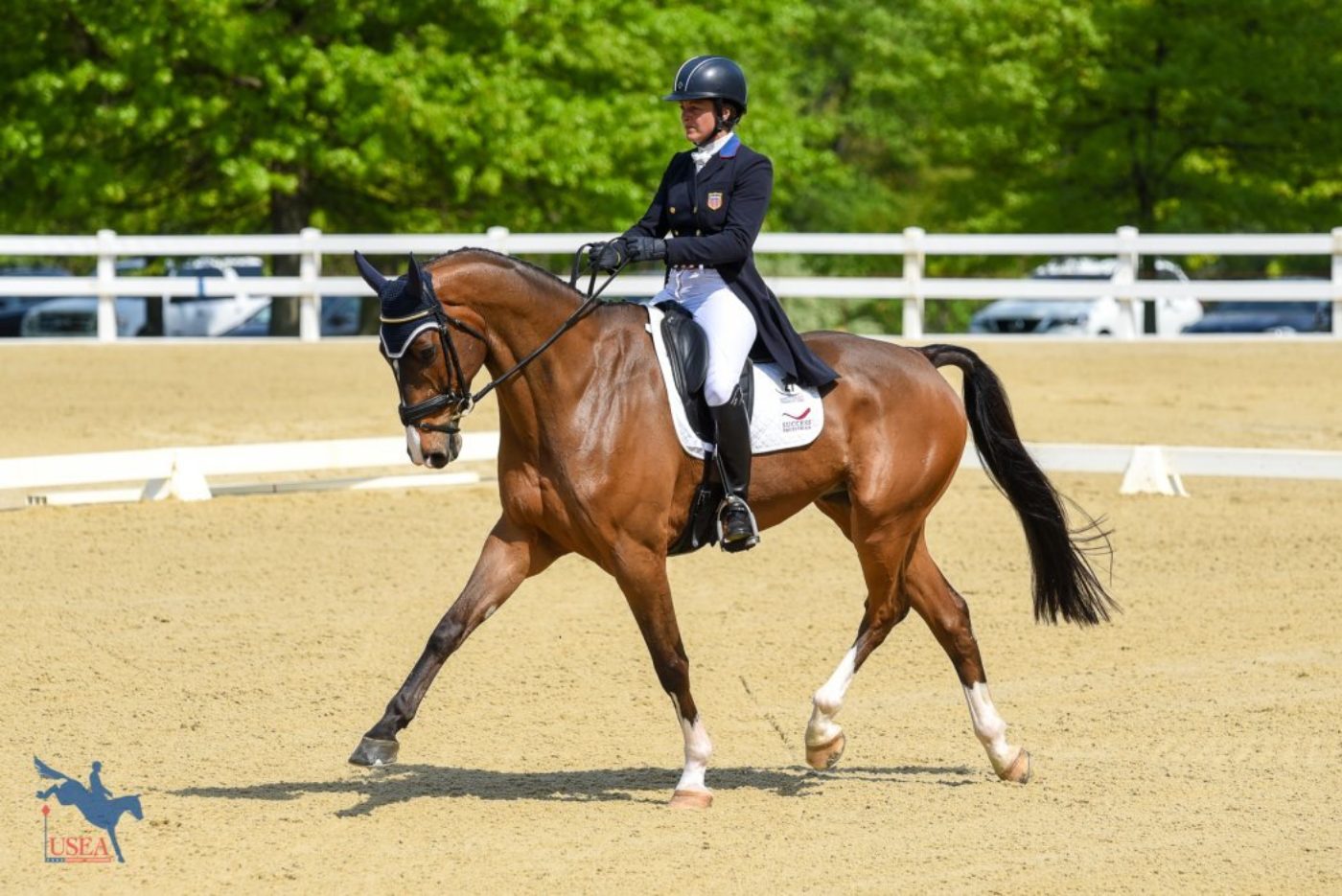 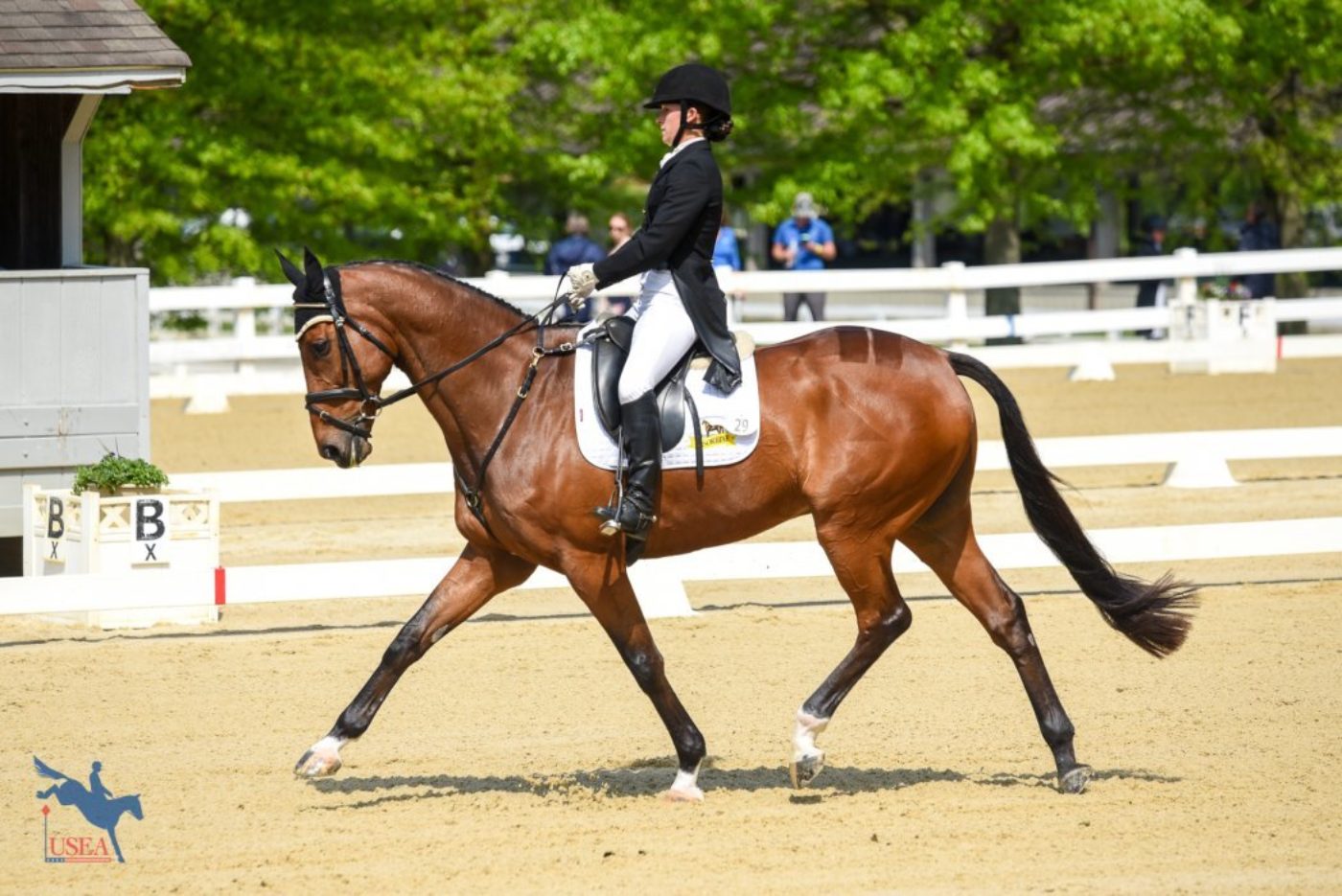 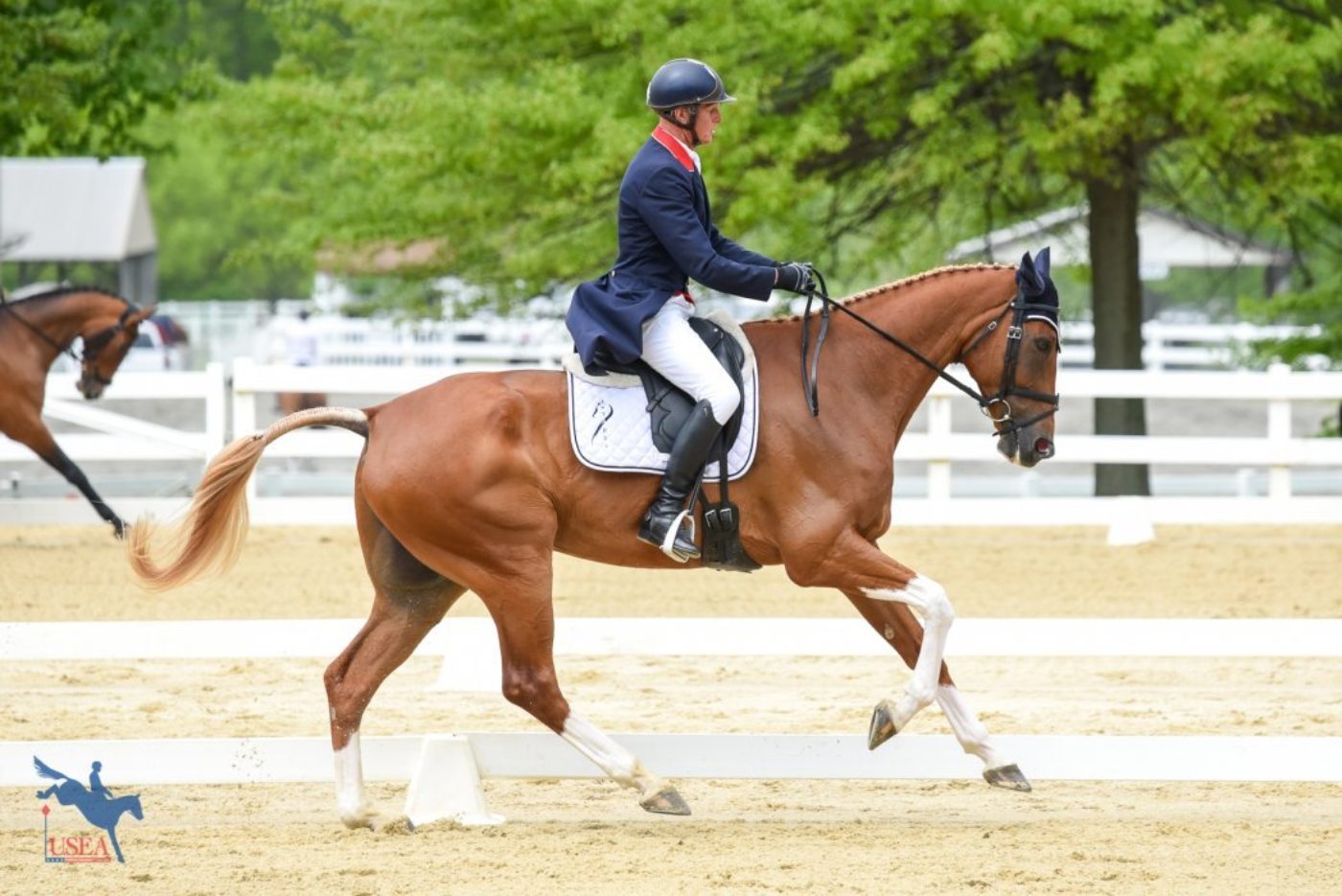 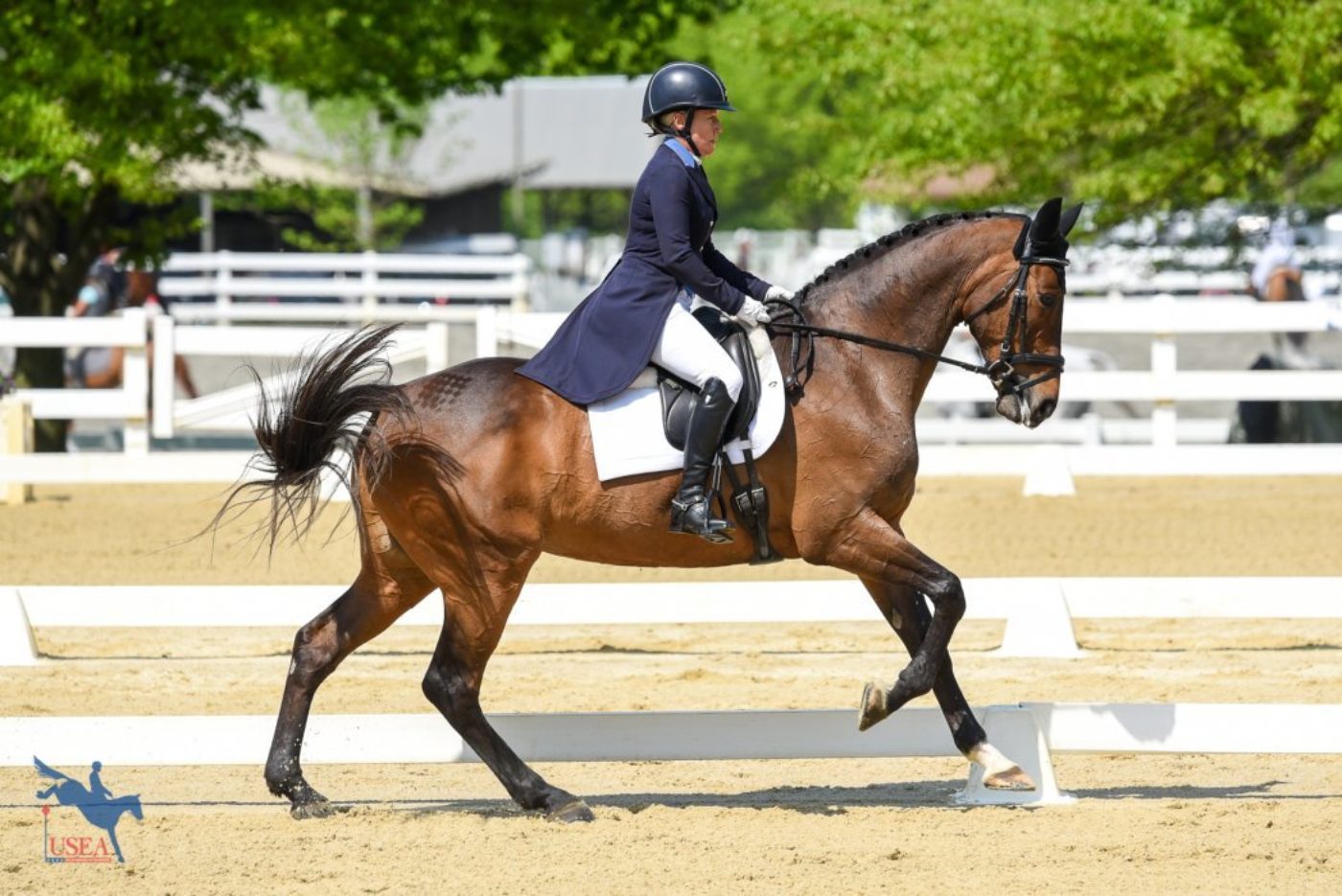 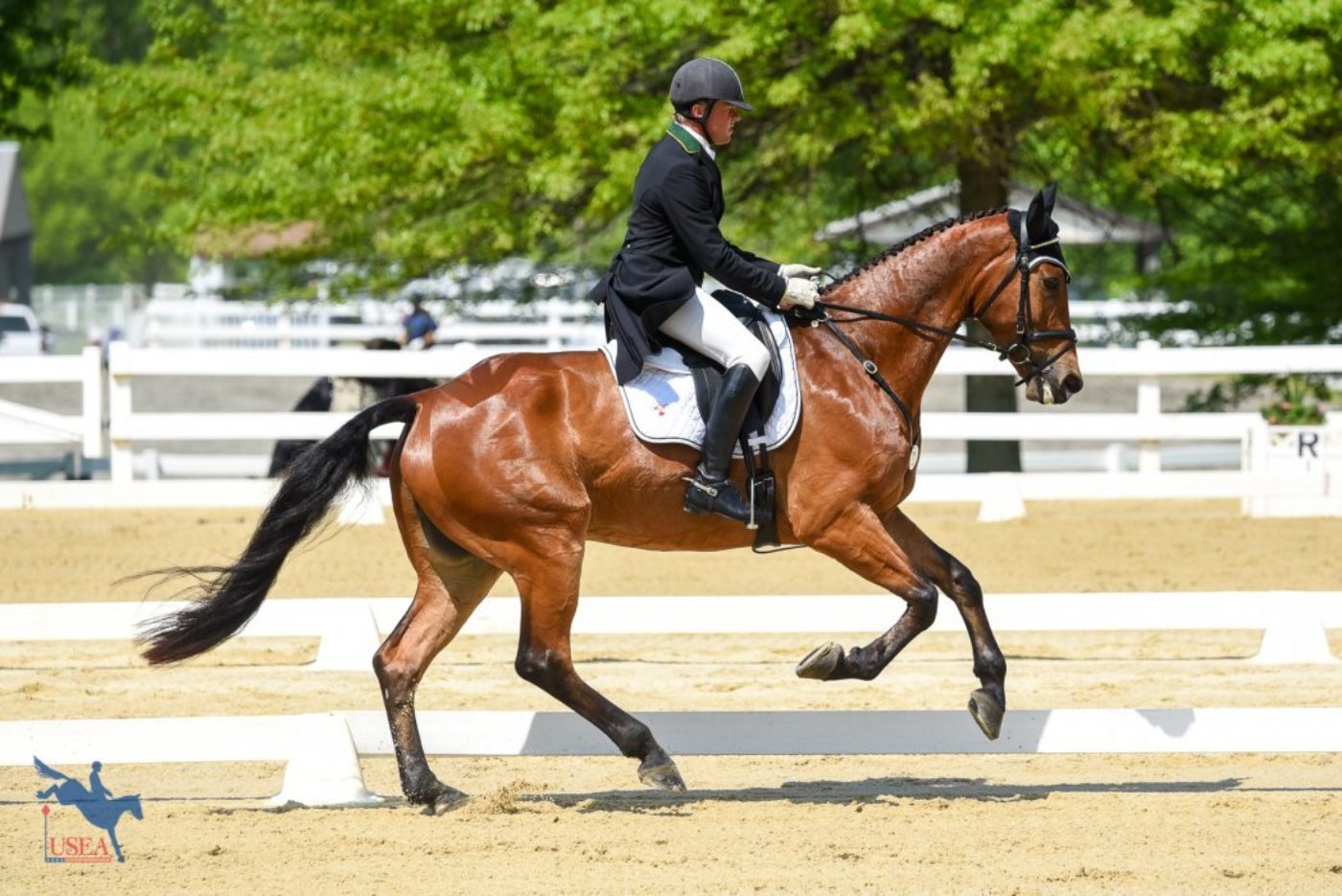 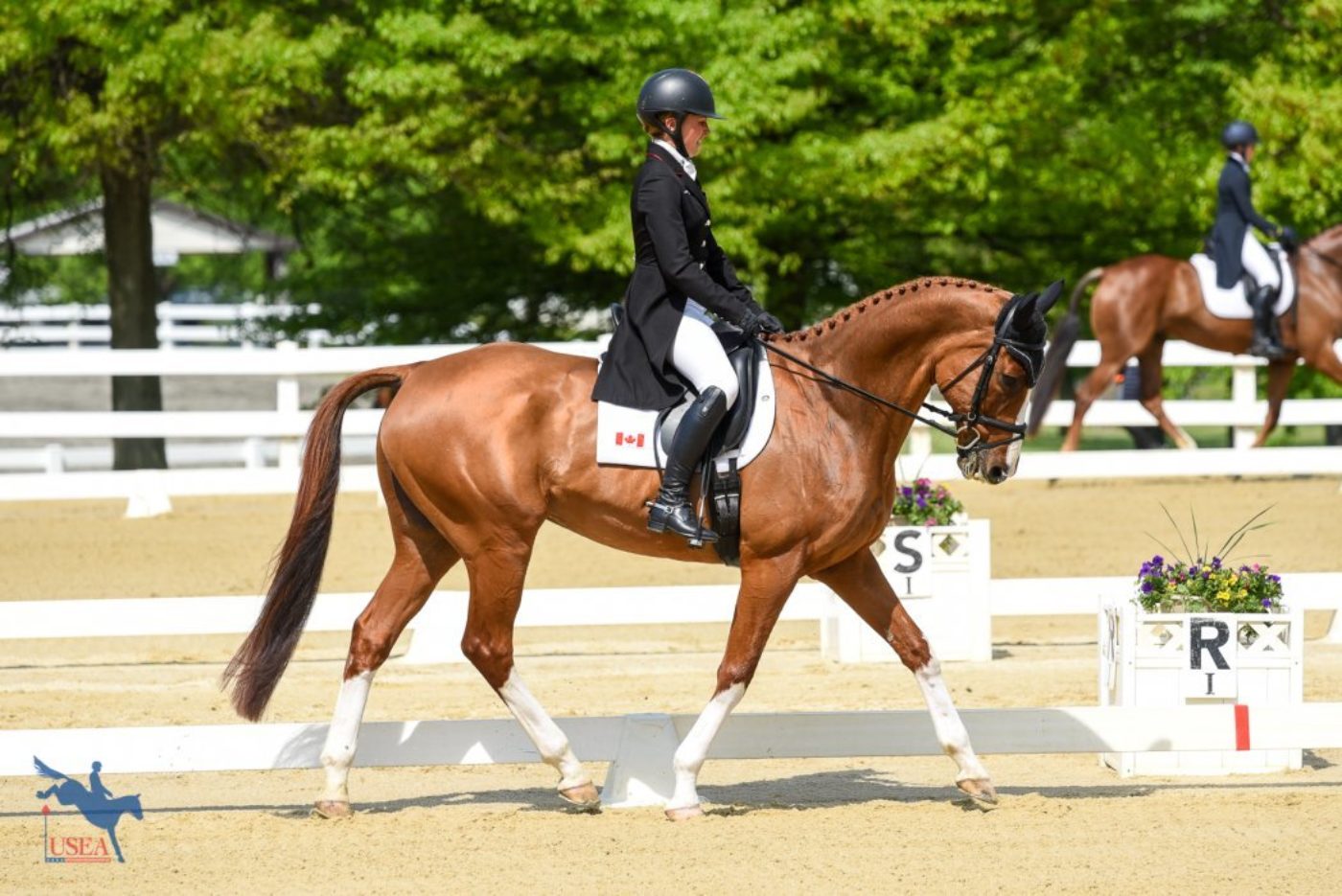 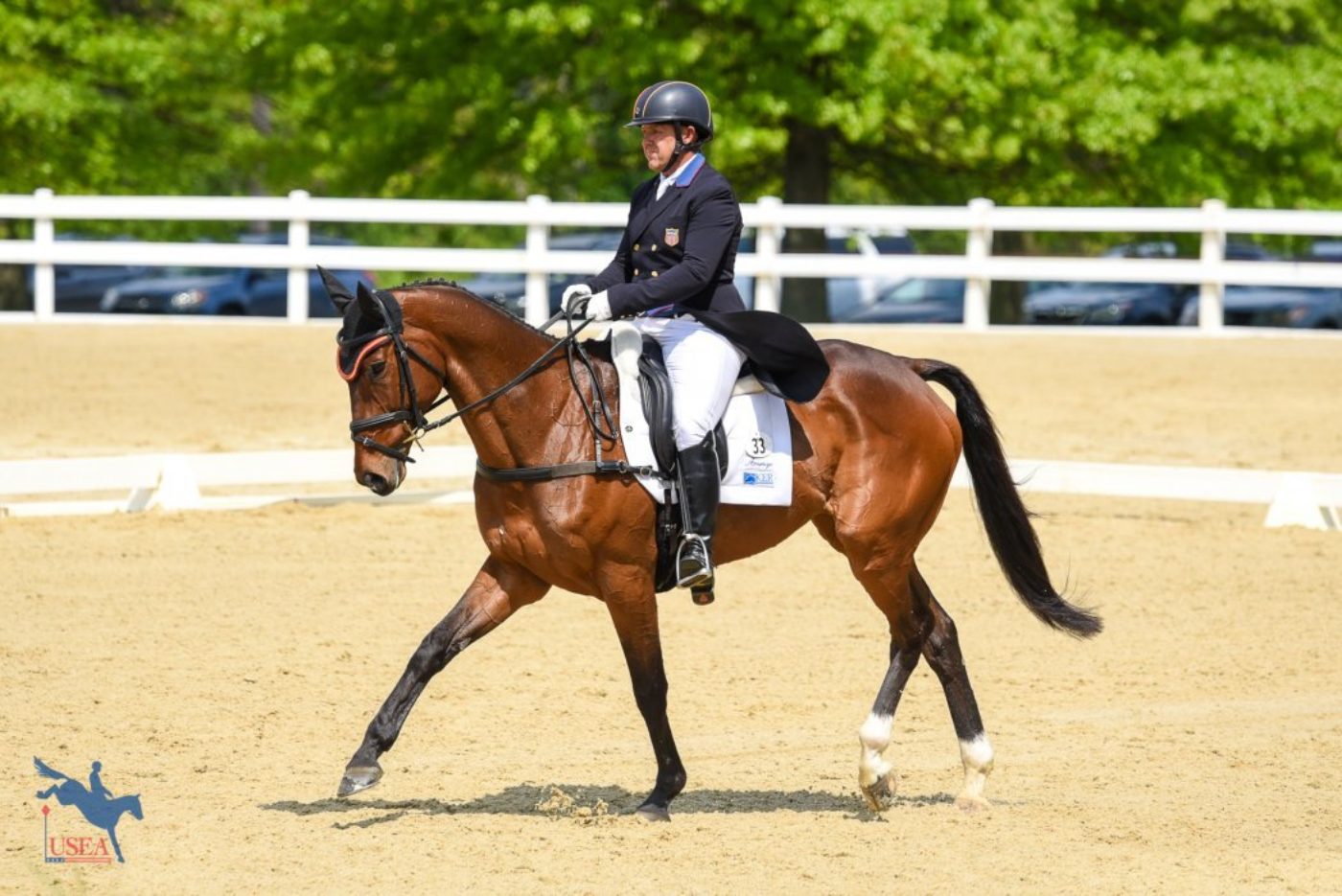