All Tight at the Top for $50,000 Mars Eventing Showcase Finale

As predicted both jumping phases proved influential at the $50,000 Mars Eventing Showcase. Five combinations withdrew overnight, leaving 33 horses coming forward to show jump over a big track designed by Andy Christiansen. Of those, only 11 jumped clear within the time allowed which saw some significant re-shuﬄing on the leaderboard.

Dressage leader Marilyn Little and RF Scandalous had a big enough cushion that their single fence down wasn’t enough to topple them any placings. Little said that Phoebe and Michael Manders and Jacqueline Mars’ 15-year-old Oldenburg mare (Carry Gold x Richardia) got her tongue over the bit between the first and second fences, but “it was just a testament to her heart and bravery that she kept going because a few years ago she would have been incredibly distracted and wouldn’t have been able to pull that oﬀ.”

Boyd Martin and Selena O’Hanlon saw their podium places plummet to 12th and 14th places respectively after pulling two rails each on Long Island T and Foxwood High. Instead, they were filled by Buck Davidson on Carlevo and Phillip Dutton and Z capitalizing on their clear rounds. Liz Halliday-Sharp added nothing to her dressage on either horse and went forward to the cross-country phase with Deniro Z in fourth place and Cooley Quicksilver in seventh.

Waylon Roberts conjured a clear round out of Lancaster to find himself in fifth place after the show jumping and Sharon White and Cooley On Show rounded out the top six after also leaving all the poles in their cups.

Cross-country started just a couple of hours after the show jumping had finished and took place mainly in the Grand Prix field where the show jumping had been. A substantial and enthusiastic crowd had assembled to enjoy the action and the perfect weather, and commentator John Kyle kept everyone engaged until the very last second, maintaining the excitement with his relevant background on the competitors and mad math skills juggling what exactly was at stake during every round. Although ultimately the top eight would remain unchanged that certainly didn’t mean there weren’t plenty of thrills around Capt. Mark Phillips’ course.

By the time Little went as the final rider there had been 10 clear rounds inside the time, two falls, one retirement, and a technical elimination. Little and “Kitty” used up a few of their nine lives, surviving a hairy moment at the second of the Buckeye Nutrition skinny brushes on the top of the hill, and then another at the Horseboxes USA corner at 15. Despite having to take the time to regain her seat and her composure, and in the second instance to pick out her way to the alternative, Little and Kitty still came home with the slimmest of margins in hand to keep the lead, winning from wire-to-wire by just 0.4 penalties. So slim in fact that due to a timing confusion Davidson was actually announced the winner, but then graciously conceded once the mistake had been discovered.

Although Davidson had to be content with second place he can take some solace from how well Carlevo (Eurocommerce Caresino x Ramatuelle) went in all three phases, especially as he’d been second-guessing the next steps in their career together. “I learned a lot with him last year at Blenheim so I’ve taken a diﬀerent route with him this year and hopefully he’ll be good,” said Davidson of Carlevo LLC’s 13-year-old Holsteiner gelding. “He’s certainly good at this stuﬀ, the show jumping is getting better. The owner and I had sat down and talked about maybe selling him, but we figured he would be good for these kind of things. He’s a nice horse to have in the barn, he’s a really sweet horse, he’s good in all three phases and he was very good this weekend.”

Z, the 12-year-old Zangersheide gelding (Asca x Bellabouche) owned by Thomas Tierney, Simon Roosevelt, Suzanne Lacy, Anne Jones, and Caroline Moran, is Dutton’s most experienced horse, and after this weekend Dutton confirmed he’d probably be his choice out of his barn to take to Tokyo. They cruised around the course coming home one second under time, and Dutton also finished Fernhill Singapore in the top 10. “It was a conscious decision to come to this showcase with these two boys and then to take them to the Aiken Grand Prix, especially Z being a hotter horse. I wanted to get them in some atmosphere, and I believe that the cross-country will be not dissimilar to this in Tokyo – a shorter course, a lot of jumping eﬀorts, and a lot of turning. These will be their first two runs and then I’ll probably just do one more event if everything goes to plan, and then hopefully Z will go to Badminton.”

Liz Halliday-Sharp finished on her dressage score on both Deniro Z and Cooley Quicksilver, the only two horse rider to do so, and consequently, she also finished with two in the top 10, filling the number four and seven spots. Waylon Roberts did the Canadians proud with a fifth-place finish on Lancaster, and Daniela Moguel represented Mexico in the top-10 by finishing on her dressage score for 8th place.

The Buckeye Triple Brushes at 9 and 10 on the top of the hill were the most influential, causing both rider falls - Sara Kozumplik Murphy fell from Rubens D’ysieux and Clayton Fredericks from FE Money Made. Ariel Grald and Leamore Master Plan had two stops at the second element and subsequently retired on course.

RF Scandalous is being aimed for the Land Rover Kentucky Three-Day Event later this spring, but Little acknowledged they’ll have to perhaps re-think their game plan, “This afternoon did not go to plan,” Little said. “She hasn’t had a normal preparation for this event, so lesson learned. Not our best weekend – some very great moments and certainly some things that showed that she has matured immensely as a competitor and certainly some things to work on. Yes, we have to go back to the drawing board and figure out what went wrong, but we also have to stick with the things we do well which is the plan that I know works for her as we come to the big day which is Kentucky.”

Little credited her longstanding partnership with Kitty as one of the keys to their success, “I have had a relationship with her for a very long time so we trade on that quite heavily, and we’ve obviously got a great support team around us which helps a lot.“

The grooms of the top three horses, Ellie Hill, Kathleen Murray, and Emma Ford were all honored and awarded cash prizes during the prize-giving ceremony, courtesy of Caroline Moran for Goshen Hill. All the riders were virtually unanimous in their praise for the venue, the format, and the organization and of course the sponsors.

“I think the cross-country was fast enough without going crazy,” Davidson said. “It’s certainly a unique event, it feels a bit more like a cross-country school than it does a big competition but I think that for most of the horses here that have the experience they understood the job. Mark [Phillips] is certainly a genius at putting these things on, he has a way of making you think it’s not going to work, but it works! Full credit to him and to everybody here that puts on a great show - the footing was perfect, and it was a fun week.” 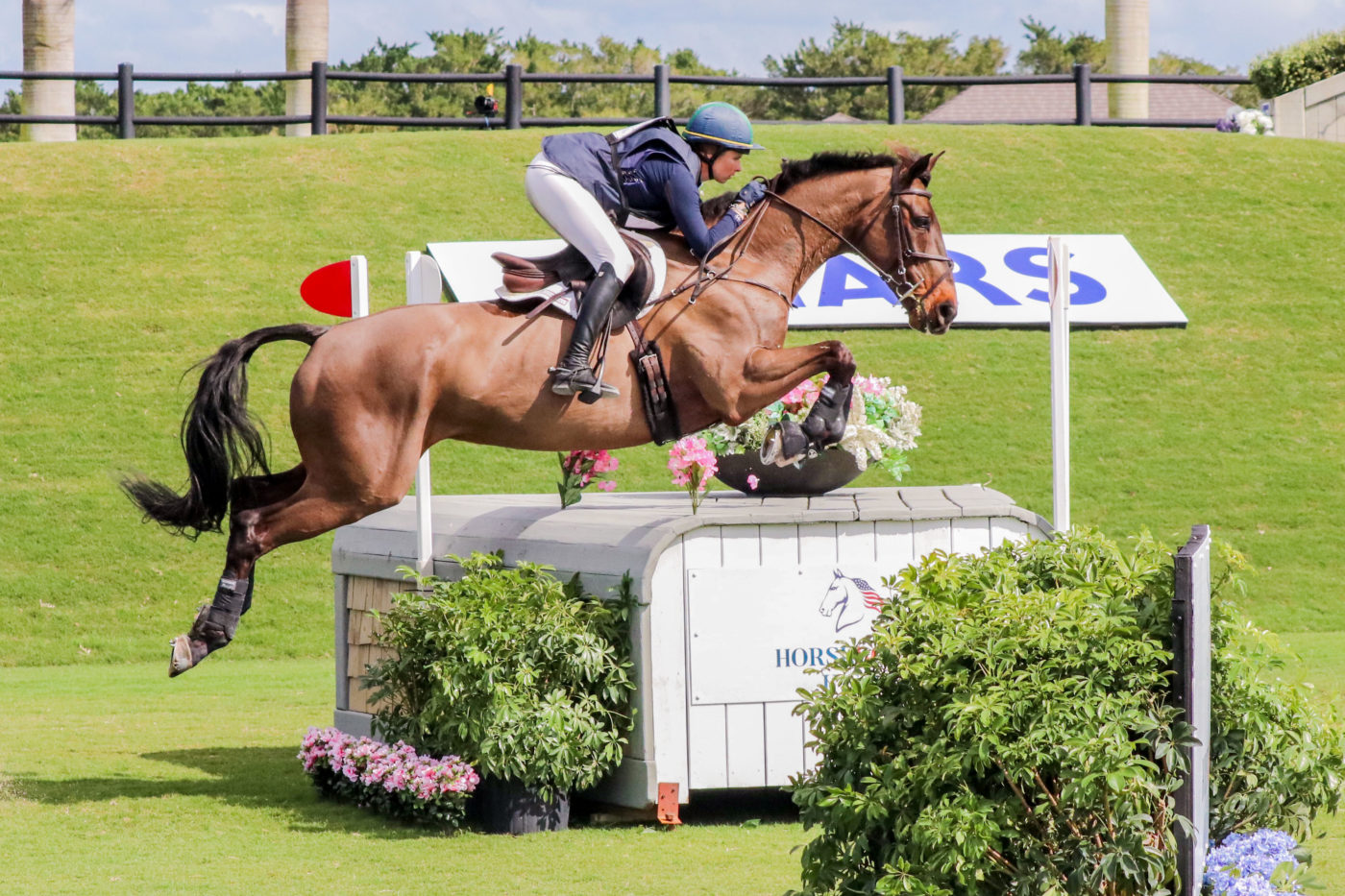 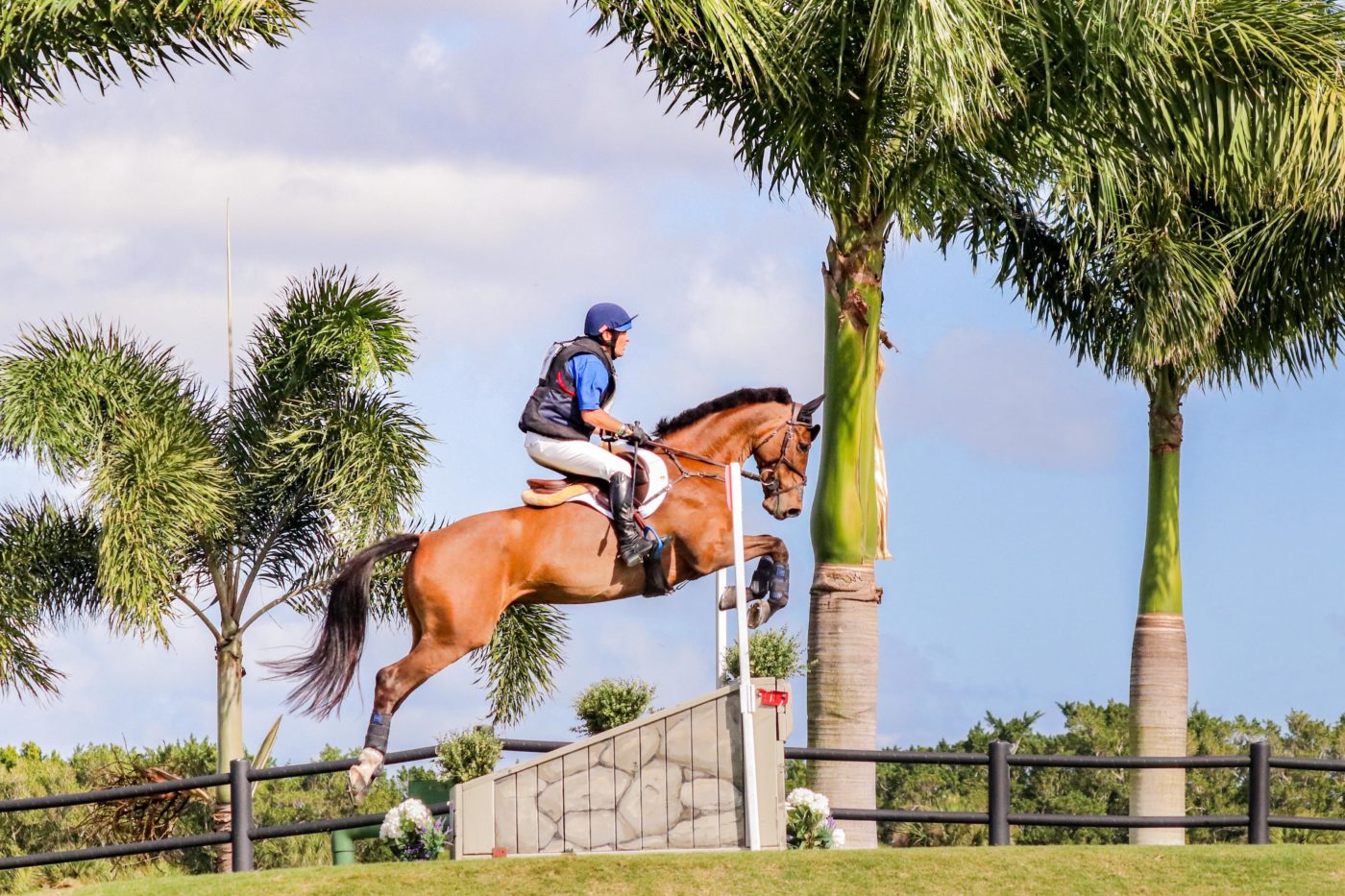 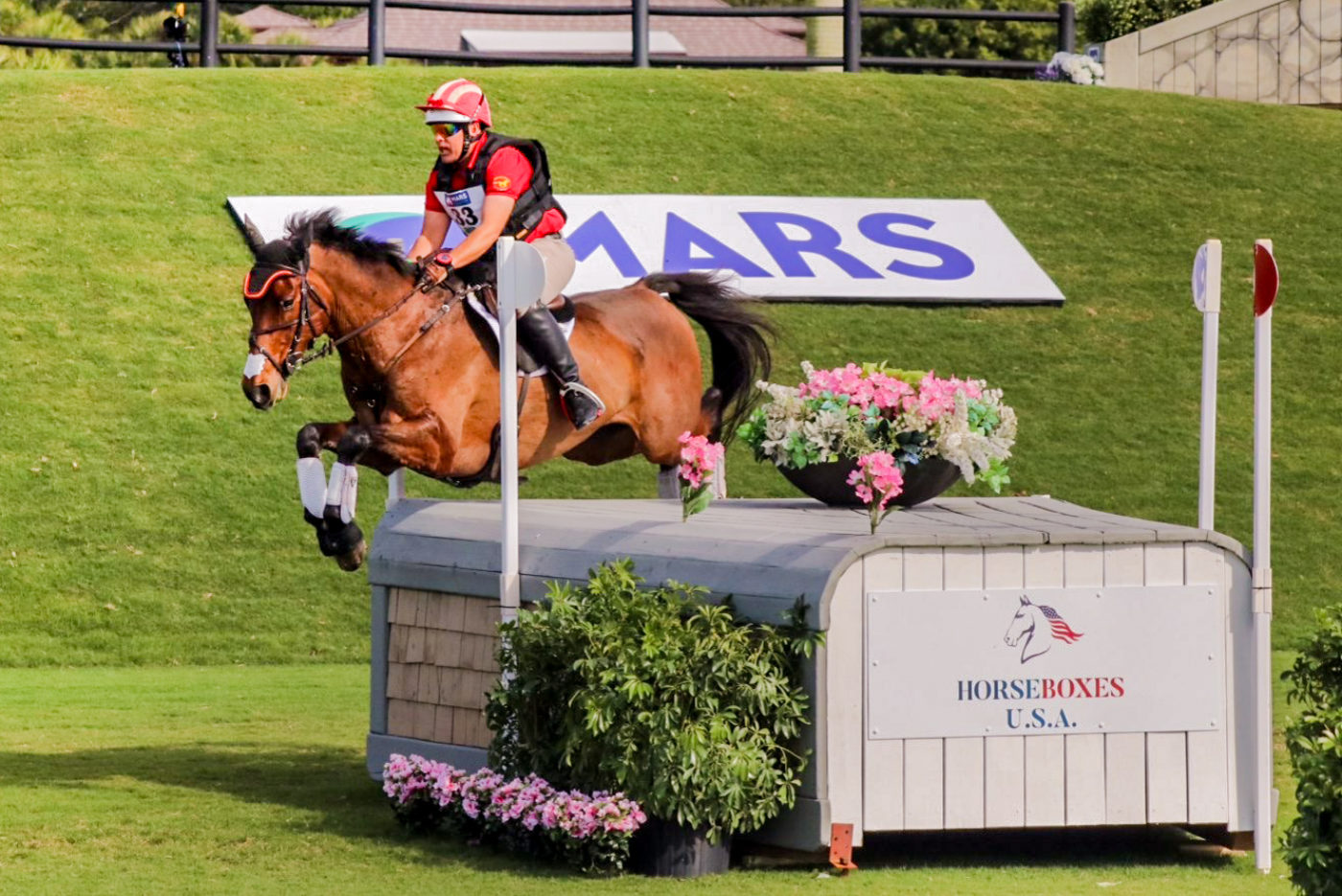 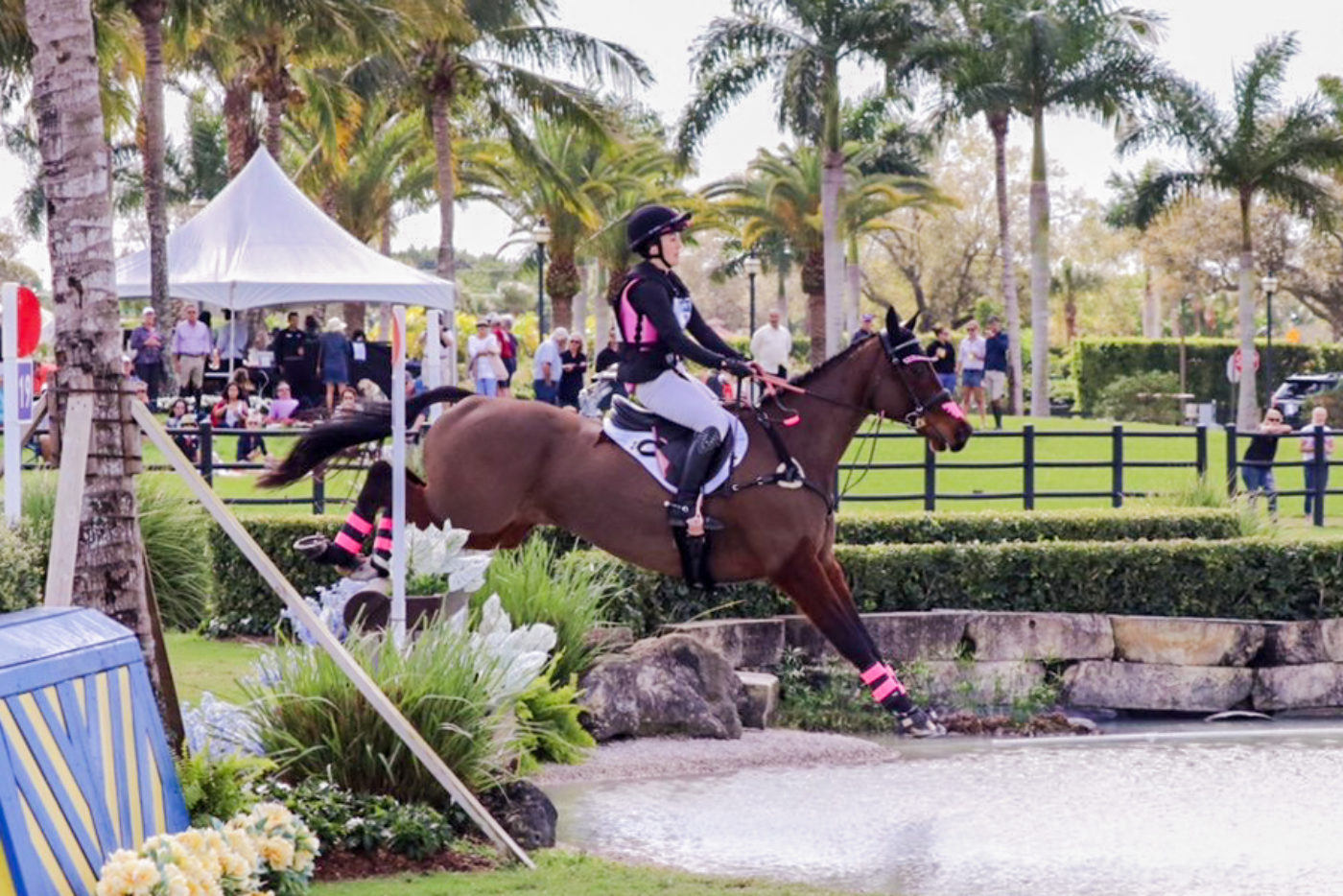 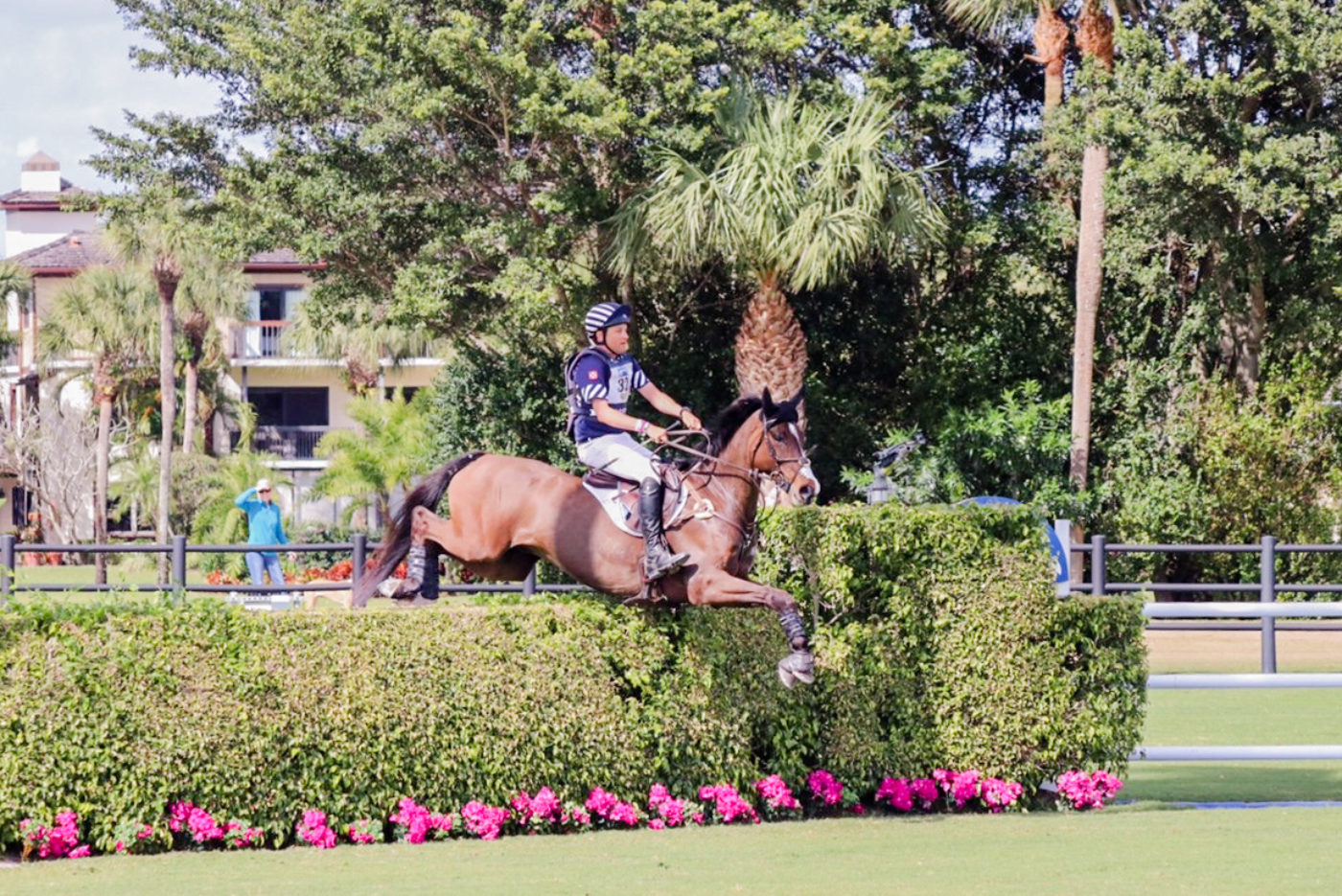 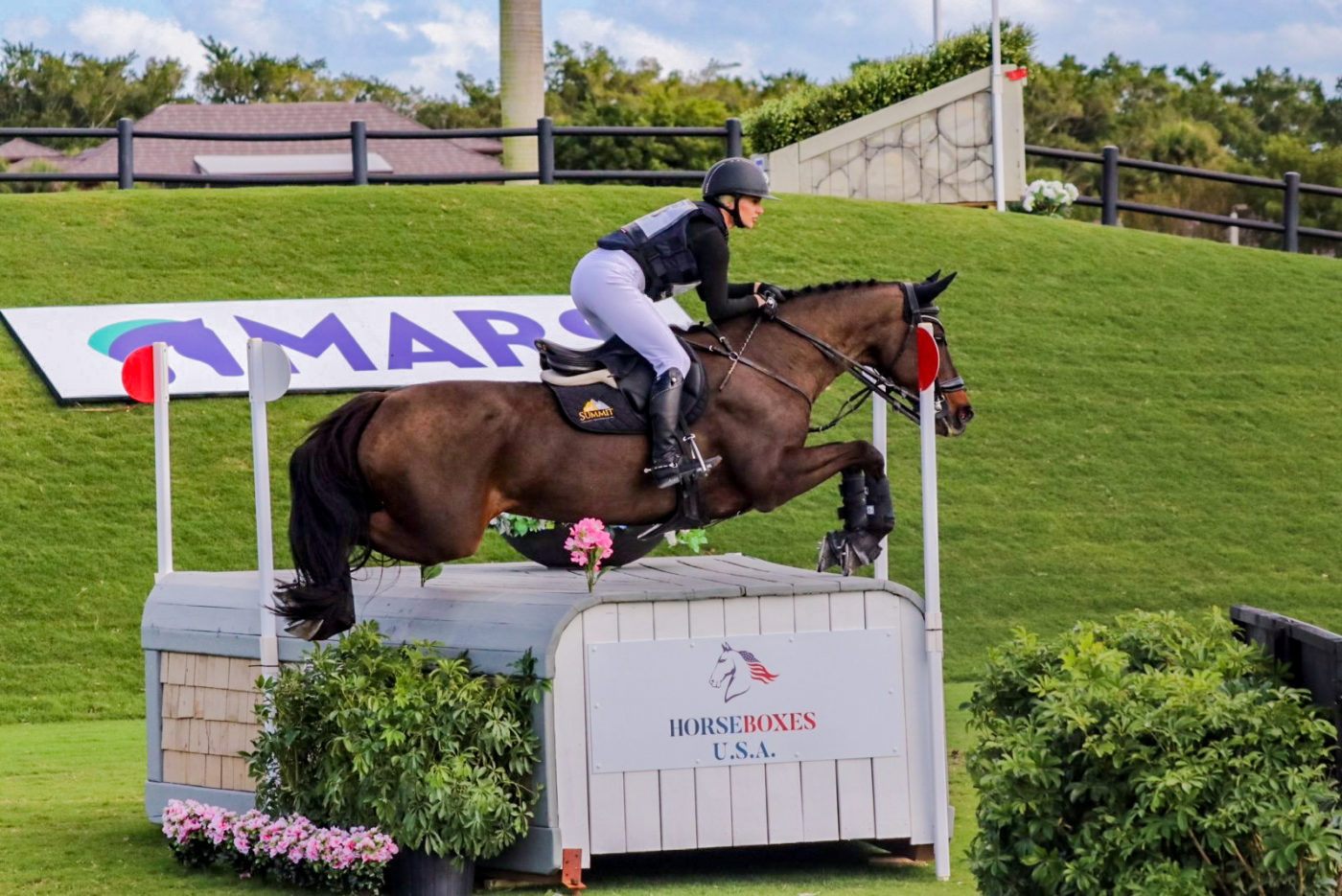 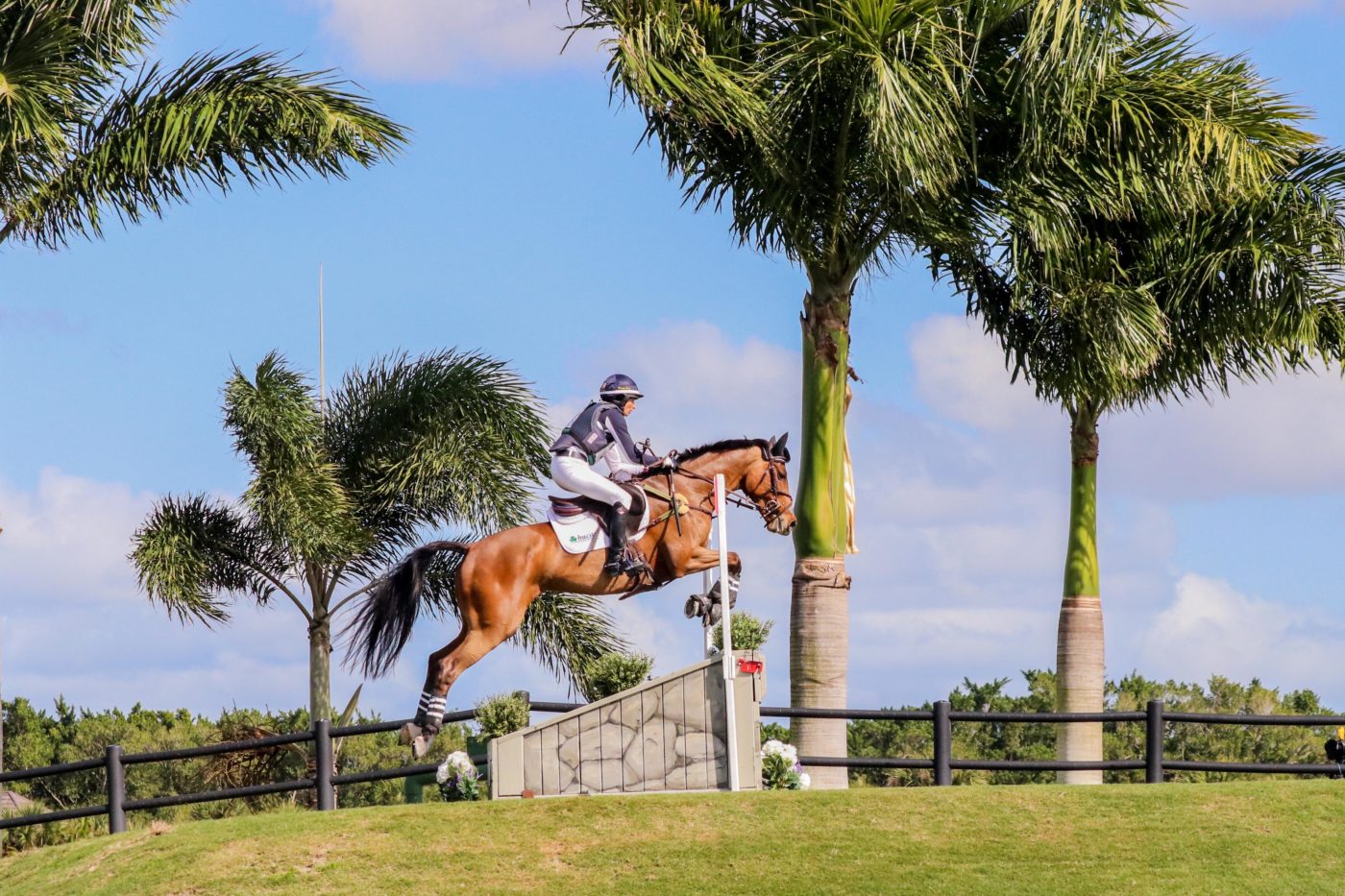 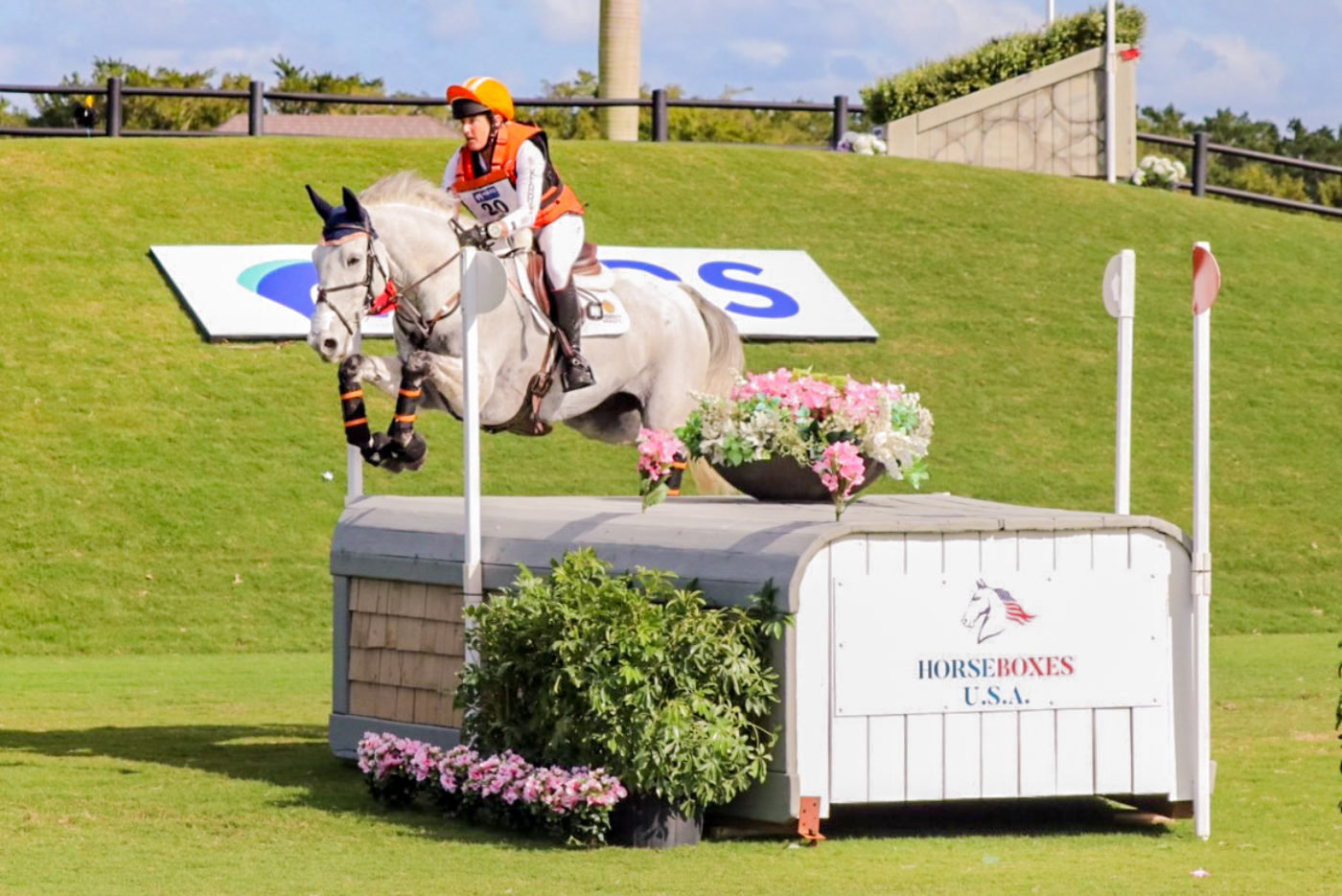 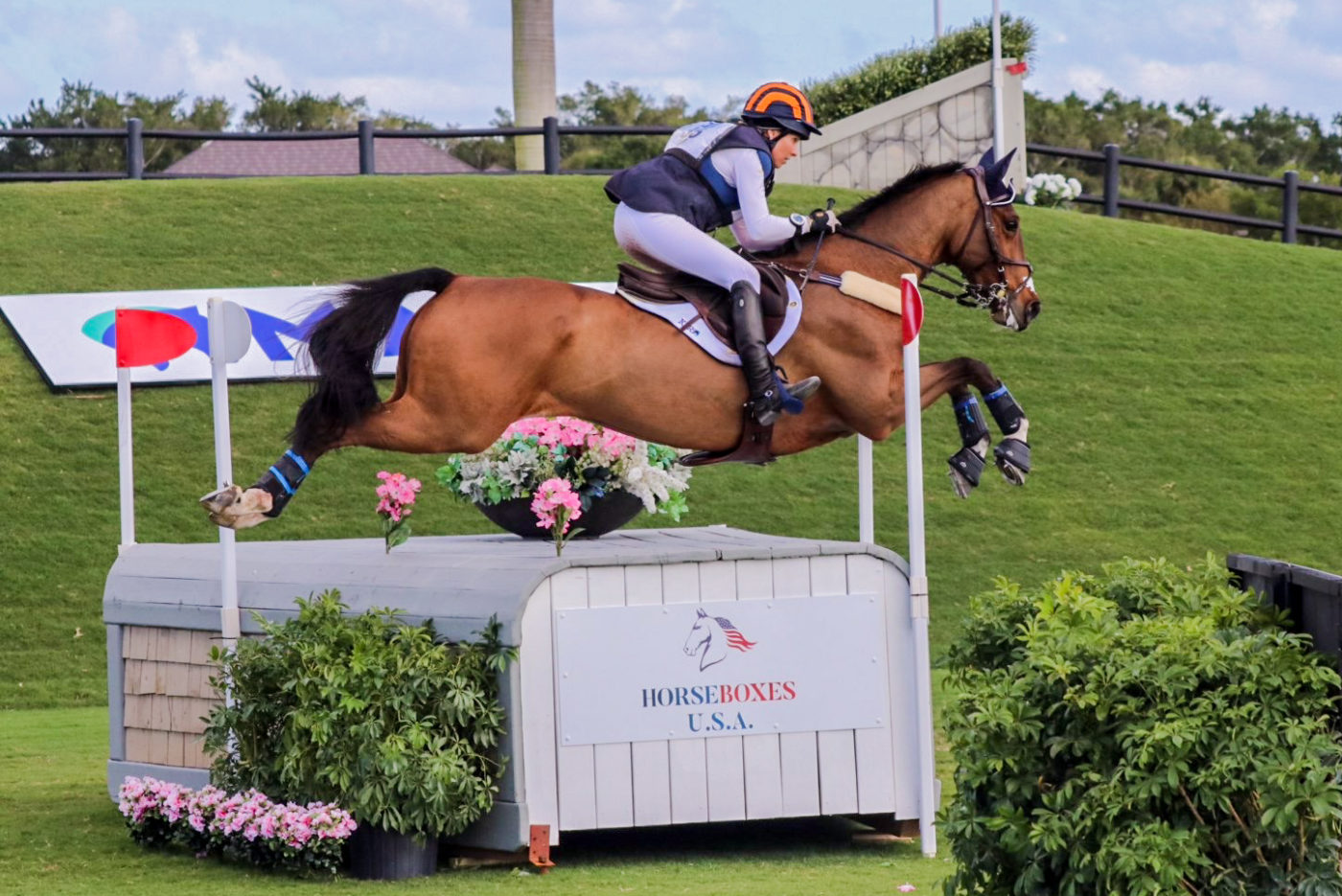 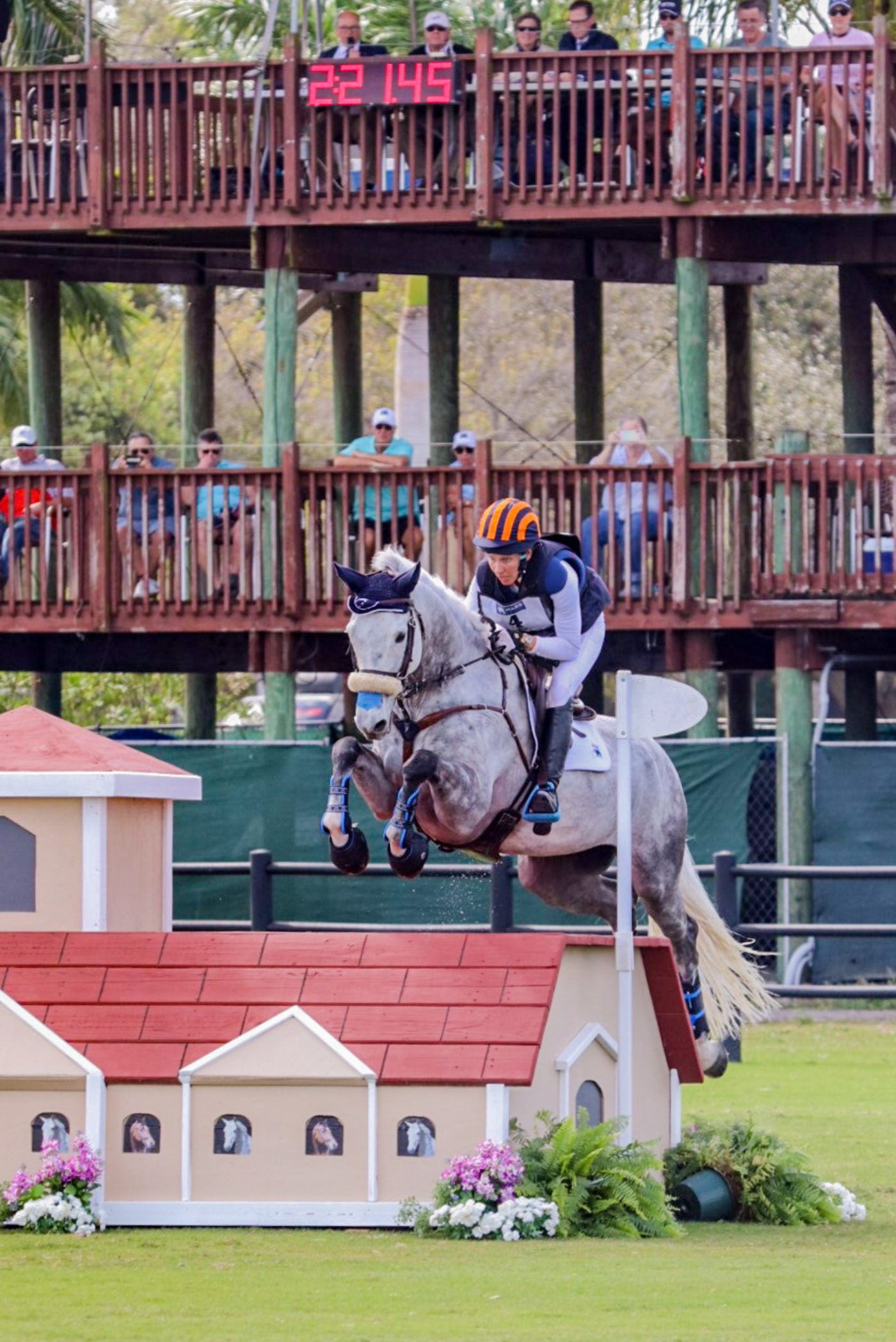