Leaders Stay On Top of the International Divisions at Galway Downs

Those that finished the CCI4*-L all did so clear and inside the time, meaning that all continuing on to the final day of competition will do so on their dressage scores. Tamra Smith and En Vogue (Earl x Laurena), leaders after dressage on a score of 28.5, were clean and fast to stay at the top of the leaderboard.

Despite her greenness, Ruth Bley’s 14-year-old Hanoverian mare put in a stellar performance today, impressing Smith. “I went out of the box and she jumped fence one and fence two was a maxed table and she just jumped it," Smith said. "She’s very green at the level – she’s done one CCI4*-S – and so I said, ‘Here we go!’ She jumped it easily, and as we were going around I thought, ‘This is amazing.’”

“It’s a testament to the foundation that was put on her because I’m really riding off of that,” continued Smith. “Bella Mowbray rode her in quite a few Intermediates and Kimmy Steinbuch rode her in the Preliminary for years. The mare’s just really come into her own and I’m really riding off of their rides . . . It proves to you, when you really put a foundation on a horse, it doesn’t matter. It’s when you move them up too fast that you see the holes. She just doesn’t have any.”

Gina Economou and her own Exclusive (Marlon x Julia S), a 10-year-old KWPN gelding, jumped double clear to move up from fourth to third.

Tamra Smith also retained her lead in the CCI3*-L aboard Ruth Bley’s Danito (Danicer x Wie Musik), a 10-year-old Hanoverian gelding. With a score of 24.3, she has more than a rail in hand going into the final phase tomorrow.

“He was so easy – he could have gone around the four-star track today,” Smith said. “I was actually nervous because he’s a horse that’s won a lot and it’s harder to win multiple times on horses once they start winning. Danito is expected to do well – he doesn’t know that, but I sure do. I just didn’t want to mess up. He is experienced at the Intermediate/three-star level and has done a CCI4*-S so I suspected that this would go well . . . He was super rideable.”

“I think the hardest thing for me is every horse I ride is completely different from the other – there’s not one that’s duplicate,” Smith observed. “You see riders ride horses and they have a type and I don’t care what it is as long as it’s nice, I ride everything.”

“Danito, knock on wood, has been very good at jumping around,” Smith said. “But he hasn’t finished a long format and then jumped after that, so I don’t know what he’s going to be like. Is he going to be tired? We’ll see. Luckily I have a cushion.”

Asia Vedder and Isi (Ibisco x Unique), her 9-year-old Holsteiner gelding, moved up to second place after a double clear round to sit on their dressage score of 32.3 going into tomorrow’s show jumping competition.

Erin Kellerhouse and Woodford Reserve (Tinaranas Inspector x Laharns Laughton), her 8-year-old Irish Sport Horse gelding, jumped up the leaderboard from fourth to third after a fault-free cross-country round to move forward to tomorrow with 32.9 penalties.

In the CCI2*-L, dressage leaders David Koss and Stunner (Escudo 19 x Whiz Bang) jumped clear around Burt Wood’s cross-country track, picking up 0.4 time penalties but still holding on to the top of the leaderboard. Koss and his own and Vicky Koss’s 6-year-old Hanoverian/Thoroughbred gelding will carry forward a score of 26.2.

Stunner is a homebred that was bred by Vicky and started by Robyn Fisher before David took over the ride. “He got a little strong and wild for her so I got him,” David shared. “He’s an opinionated little guy – he’s a character.”

“He started off like he was going to be golden and he got in the box and a horse finished and that set him off a bit so he started off a bit strong,” David said of today's cross-country ride. “I had to knuckle him down in the beginning because at Woodside he ran a bit long and flat to everything. This time it was about making a better shape over the fences.”

“He was a bit green,” David continued. “He was a lot more looky than I though the was going to be. That kind of caught me by surprise . . . It was a nice galloping course, everything rode really good. He was a good baby. He’s green but he was good.”

Looking to the show jumping tomorrow, David said that Stunner can be a bit “lackadaisical, especially after cross-country. He might be better at the same time because sometimes, like in the short format and it’s before cross-country, he can be amped and he’s too wild. Now, when it’s after cross-country, it’s a little better because he’s more rideable.”

Olivia Loiacono-Putrino and Lauren Gillis’s 8-year-old German Sporthorse mare Under the Spotlight (Fleiner x Sabinettee) sat in third after dressage on a score of 27.9 but moved up into second place with a double clear cross-country round.

Tamra Smith and MaiStein (Rocky Lee x High Ovation), her own and the MB Group’s 6-year-old Oldenburg gelding, moved up from sixth place to third place on their dressage score of 29.0. 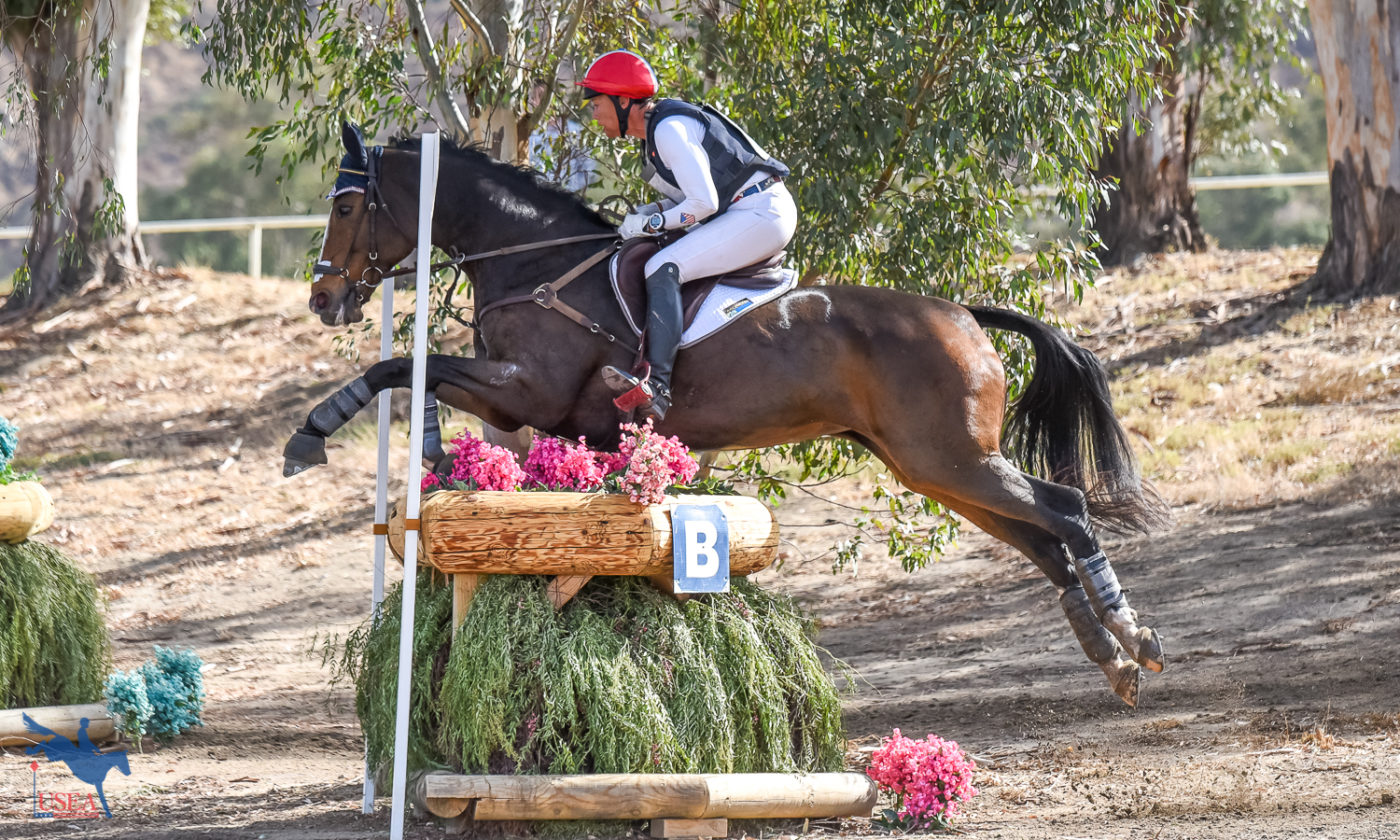 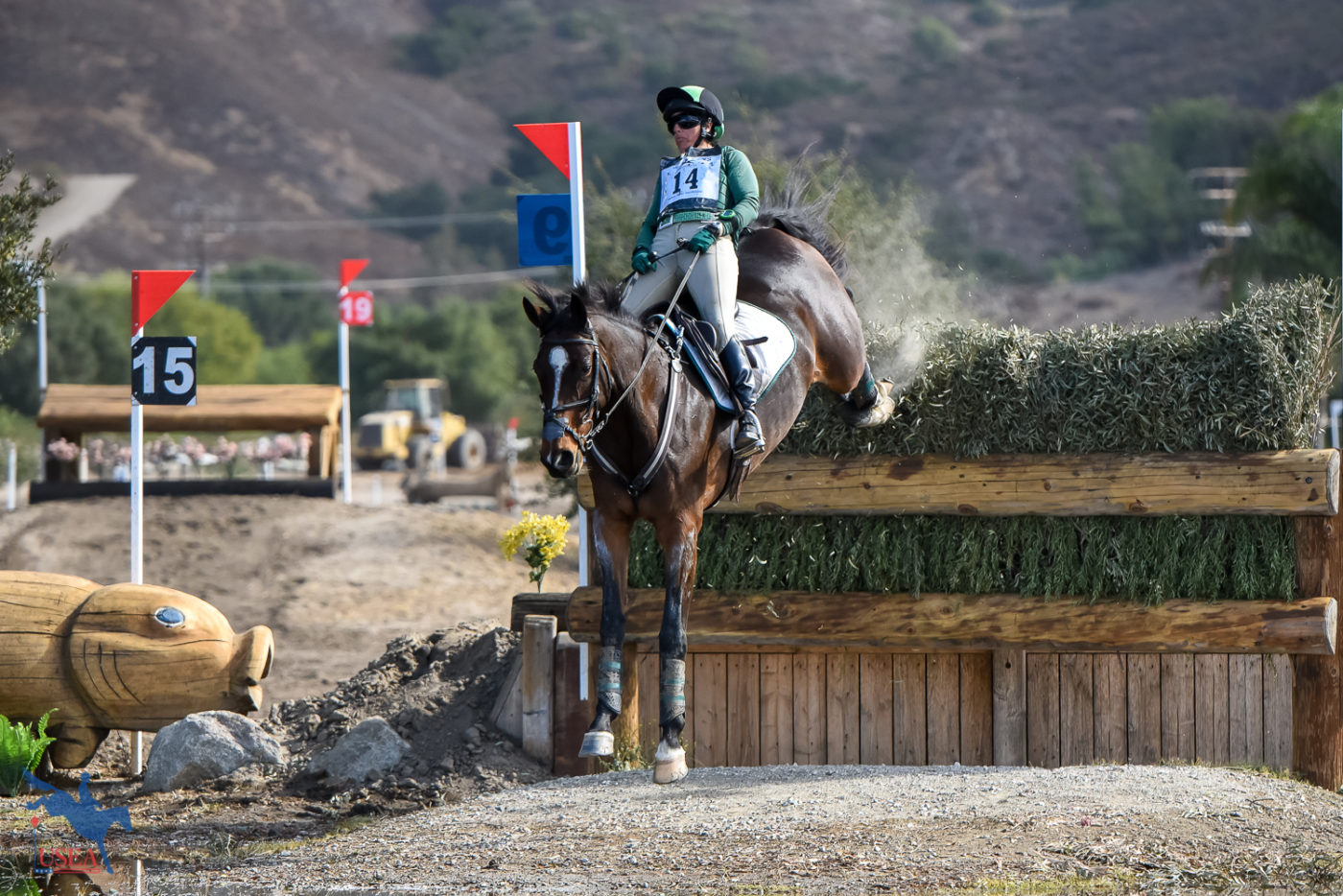 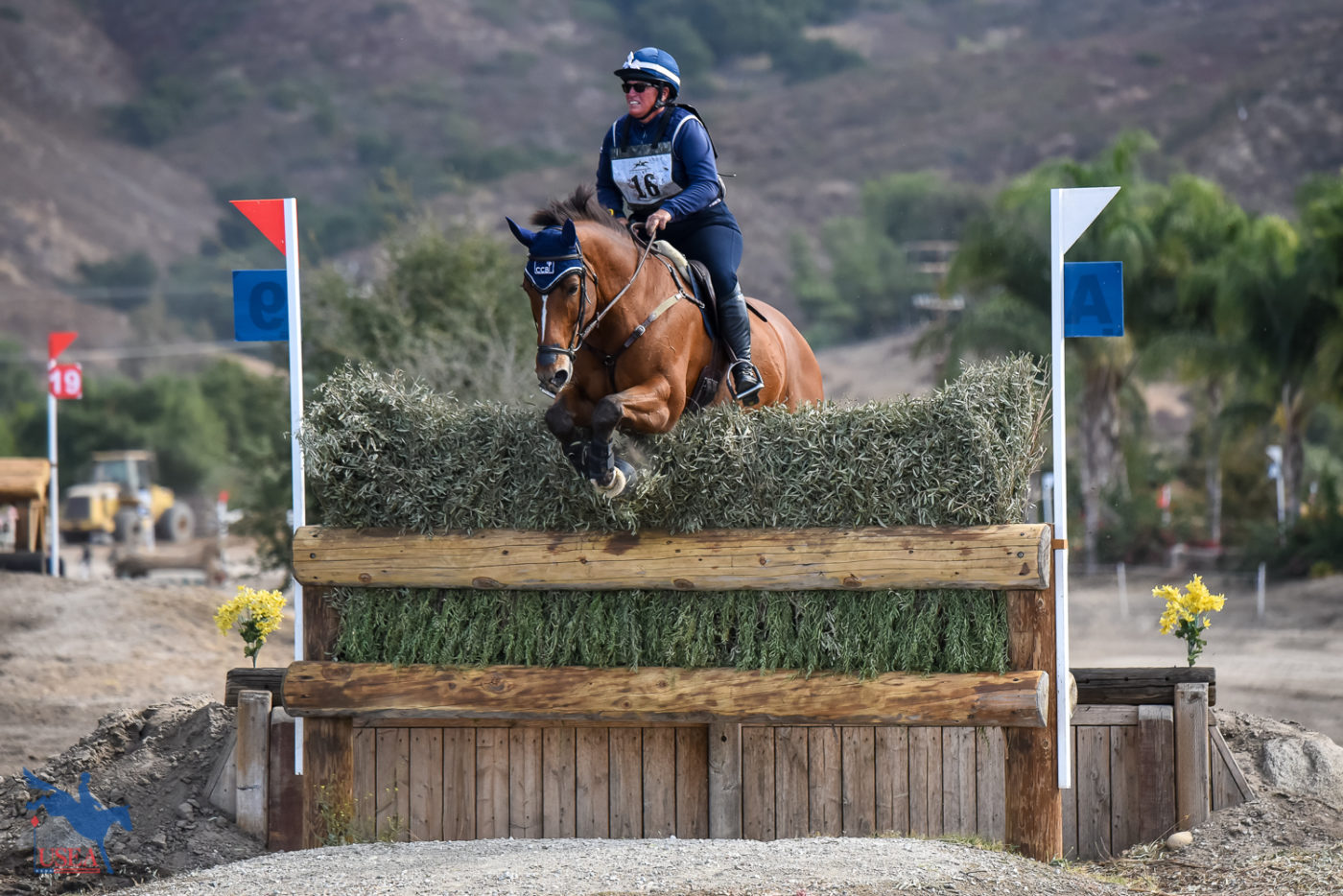 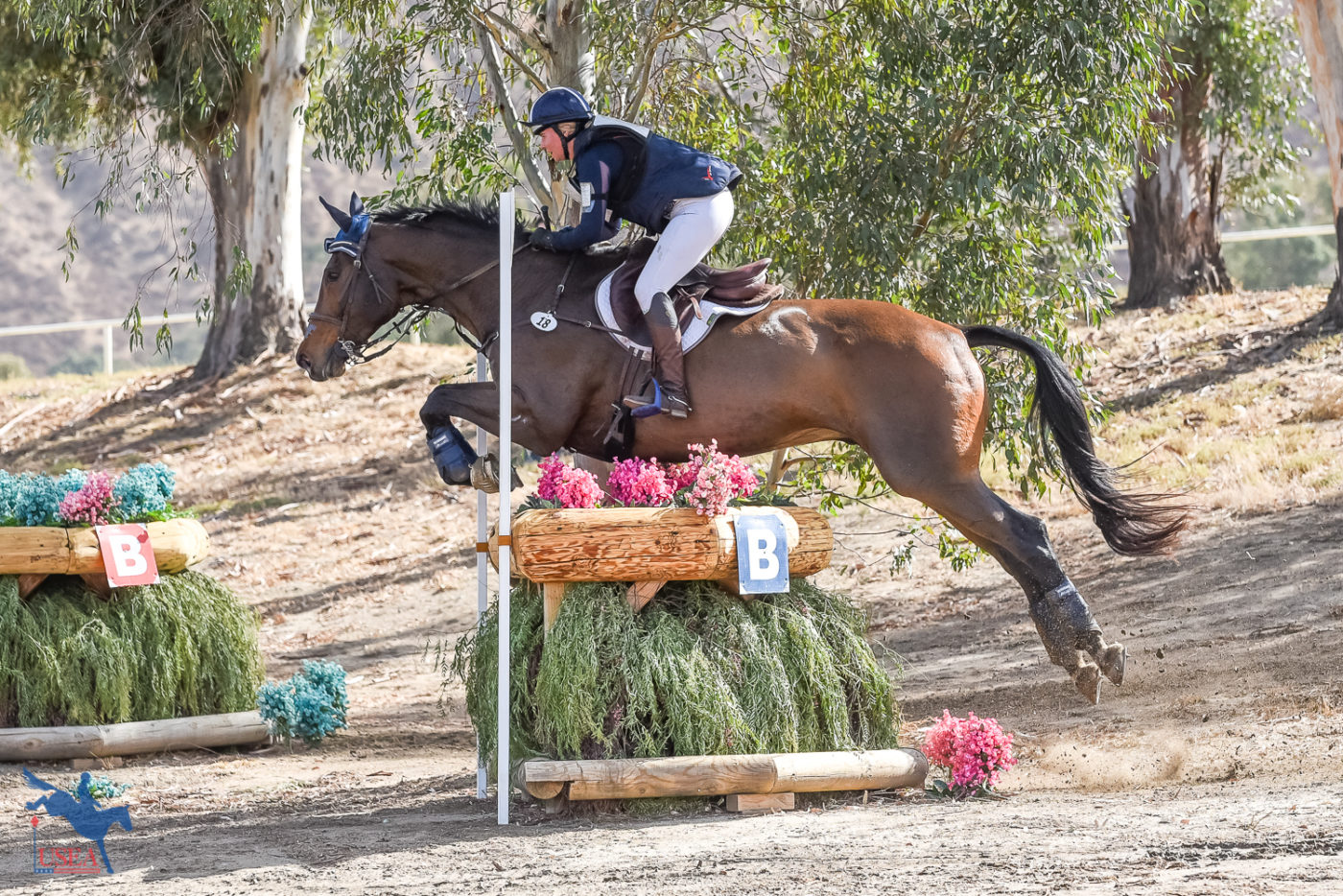 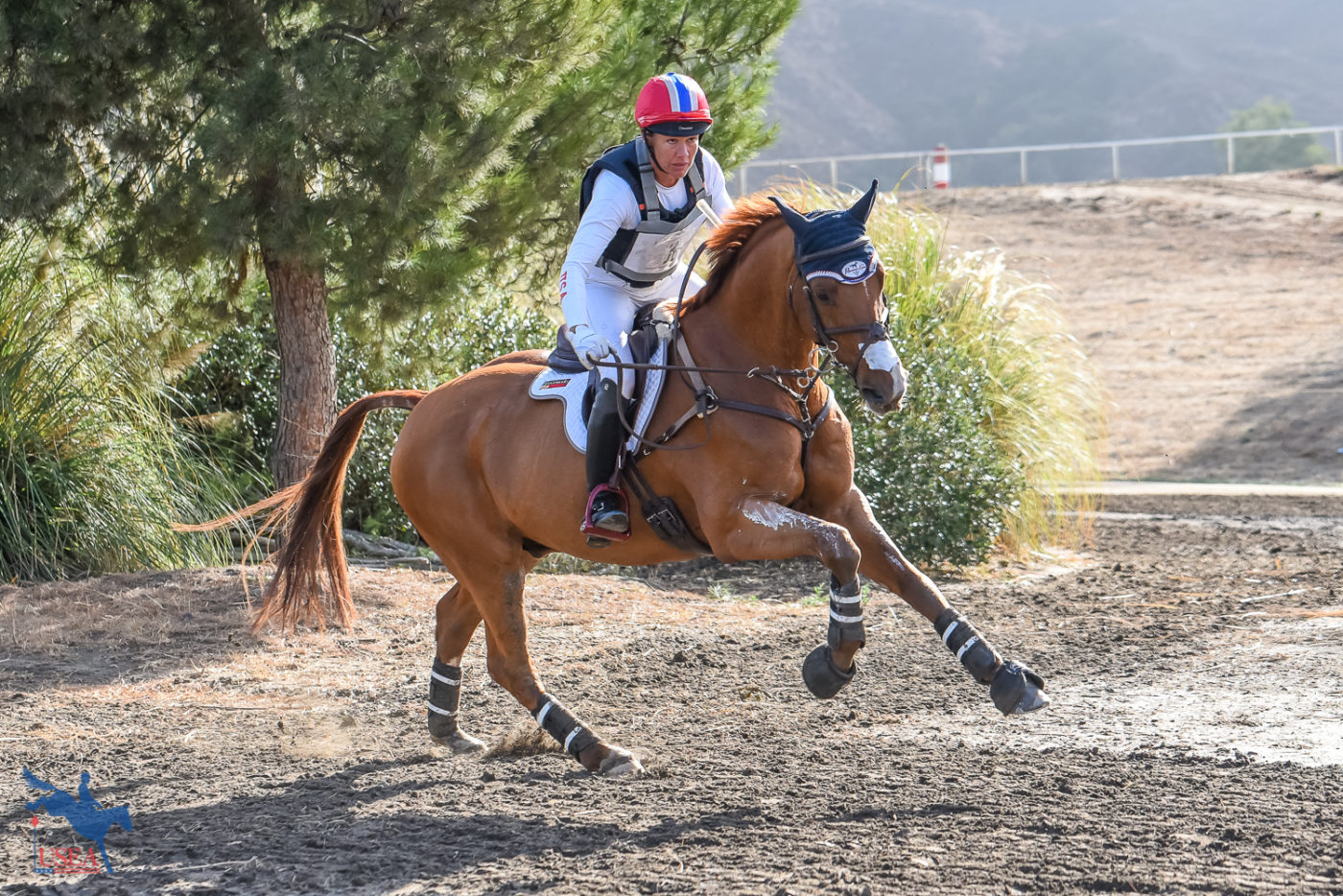 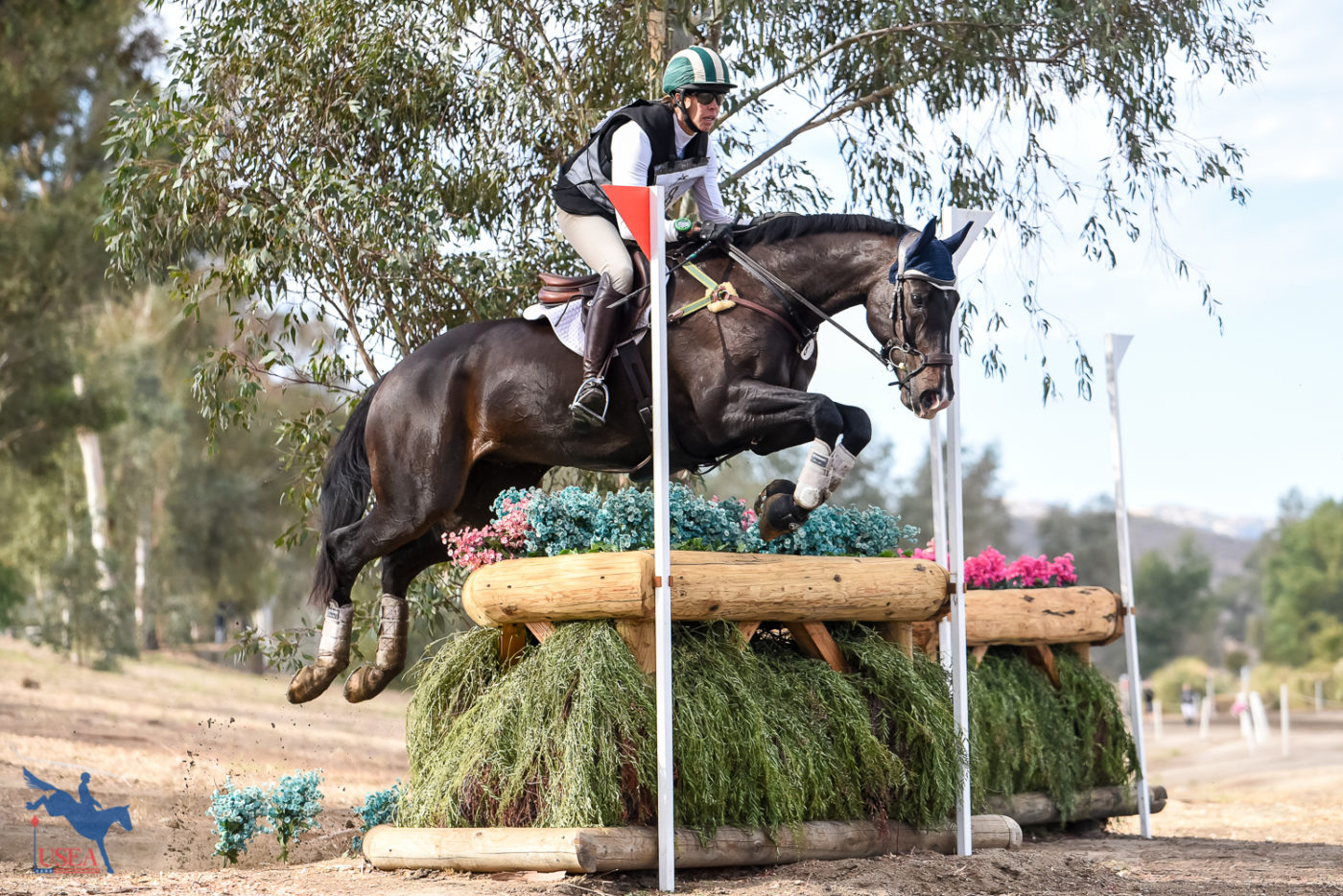 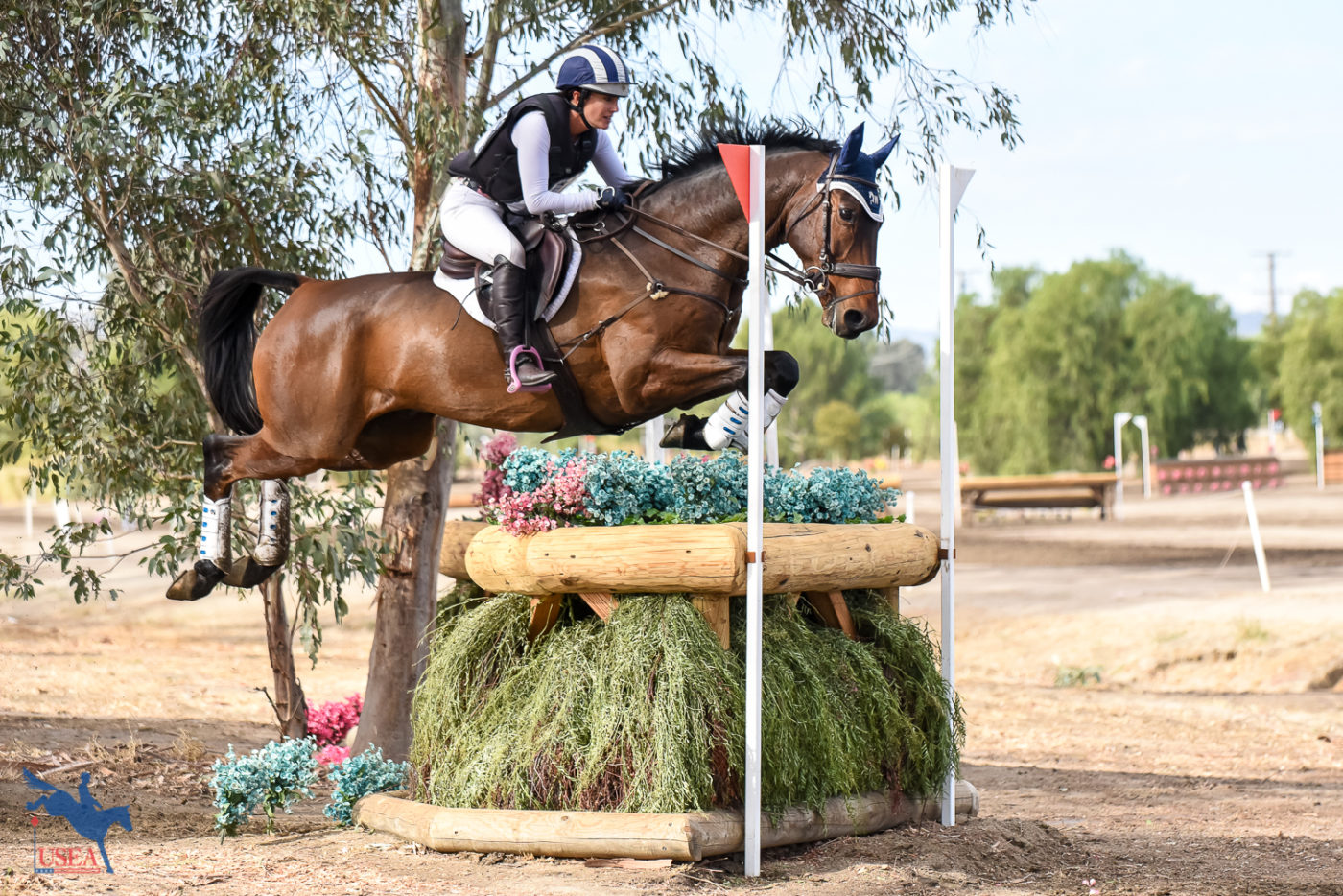 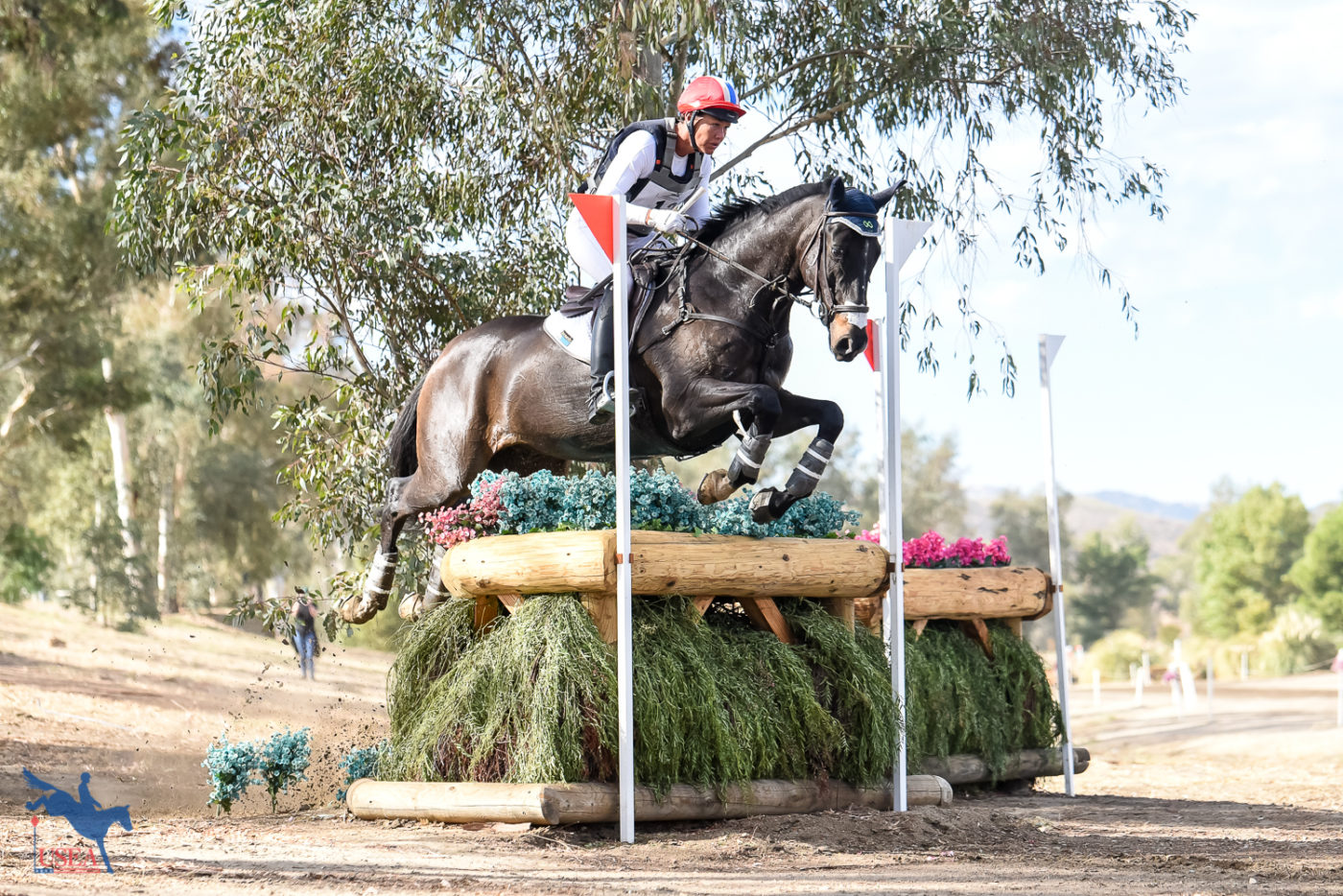 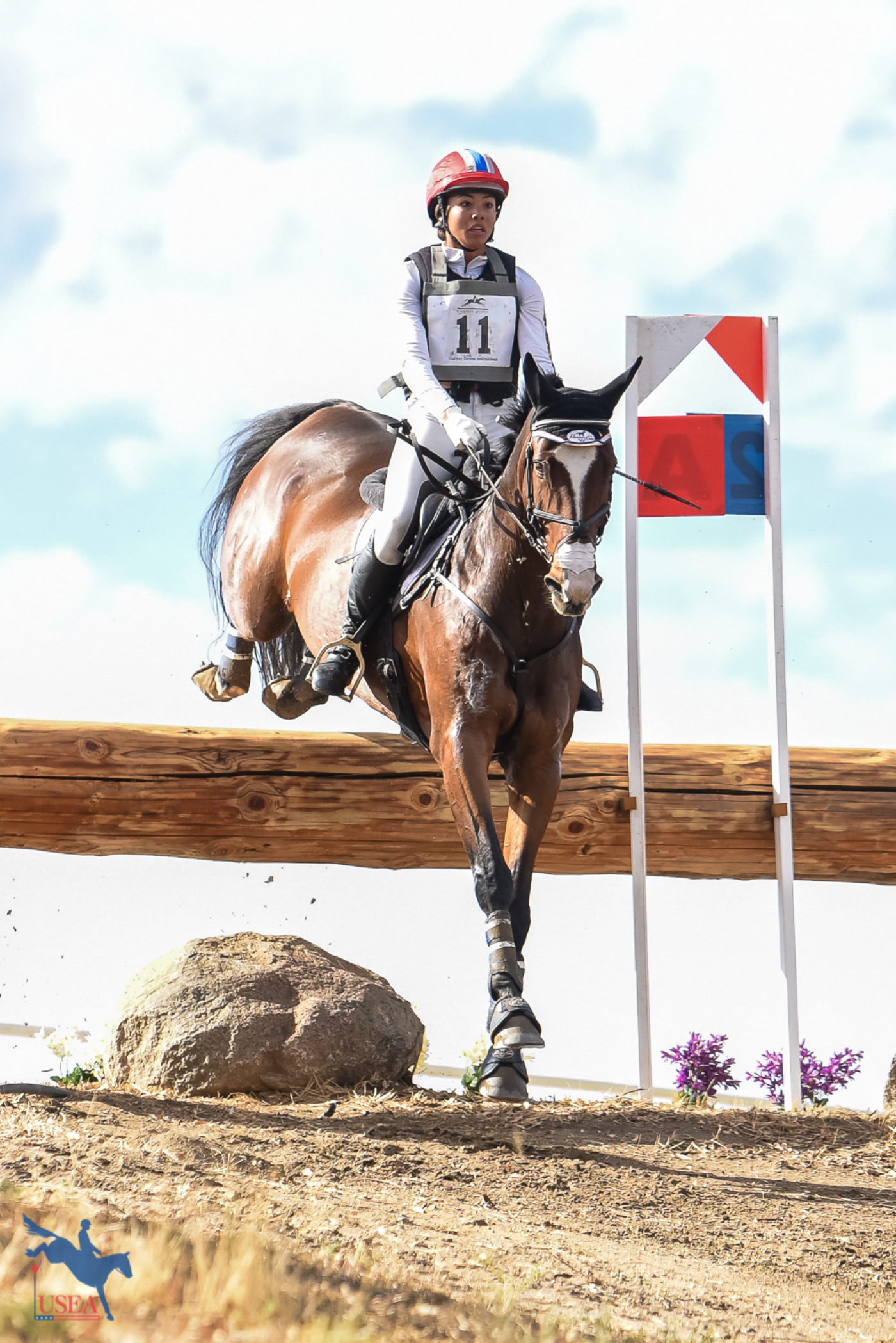 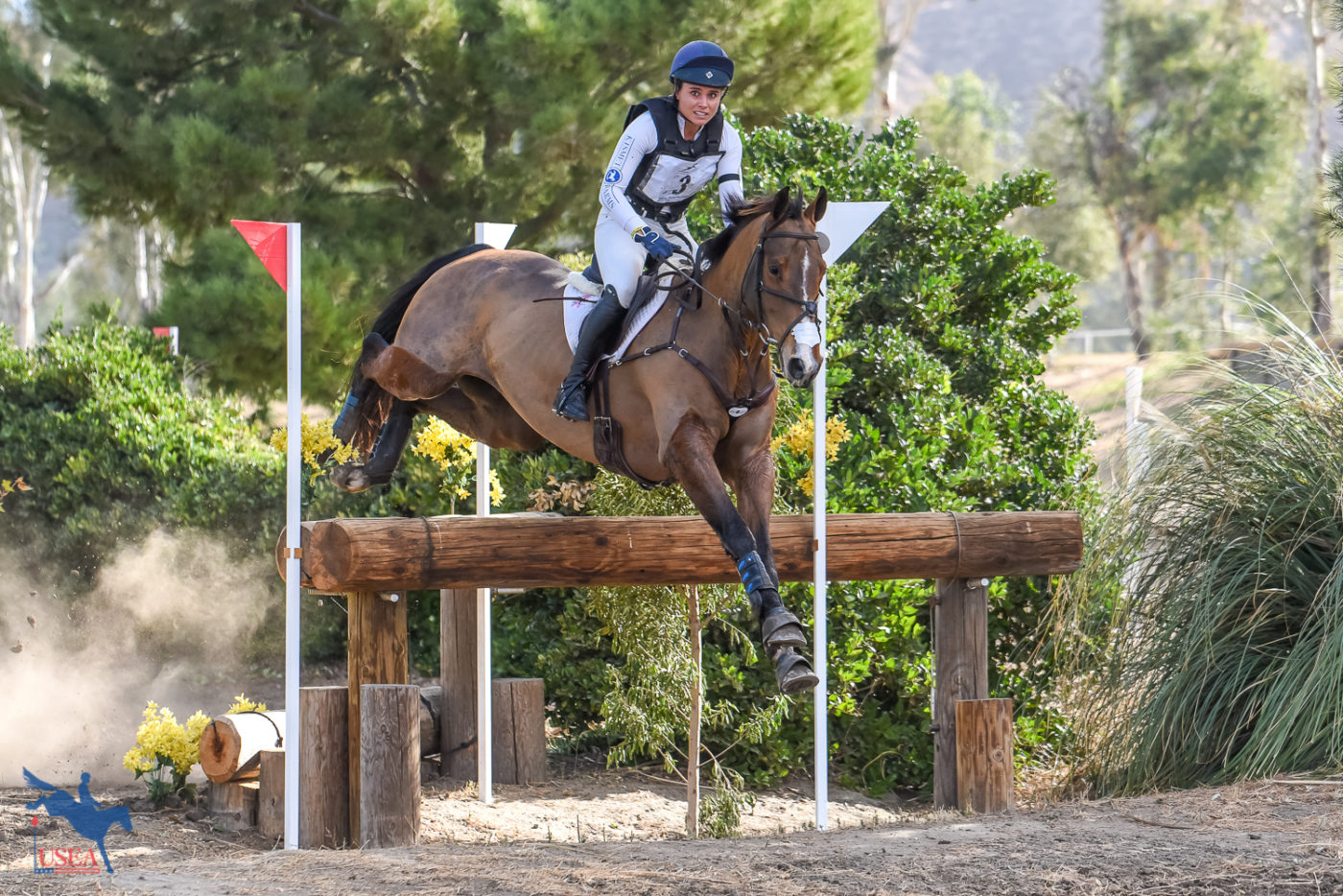 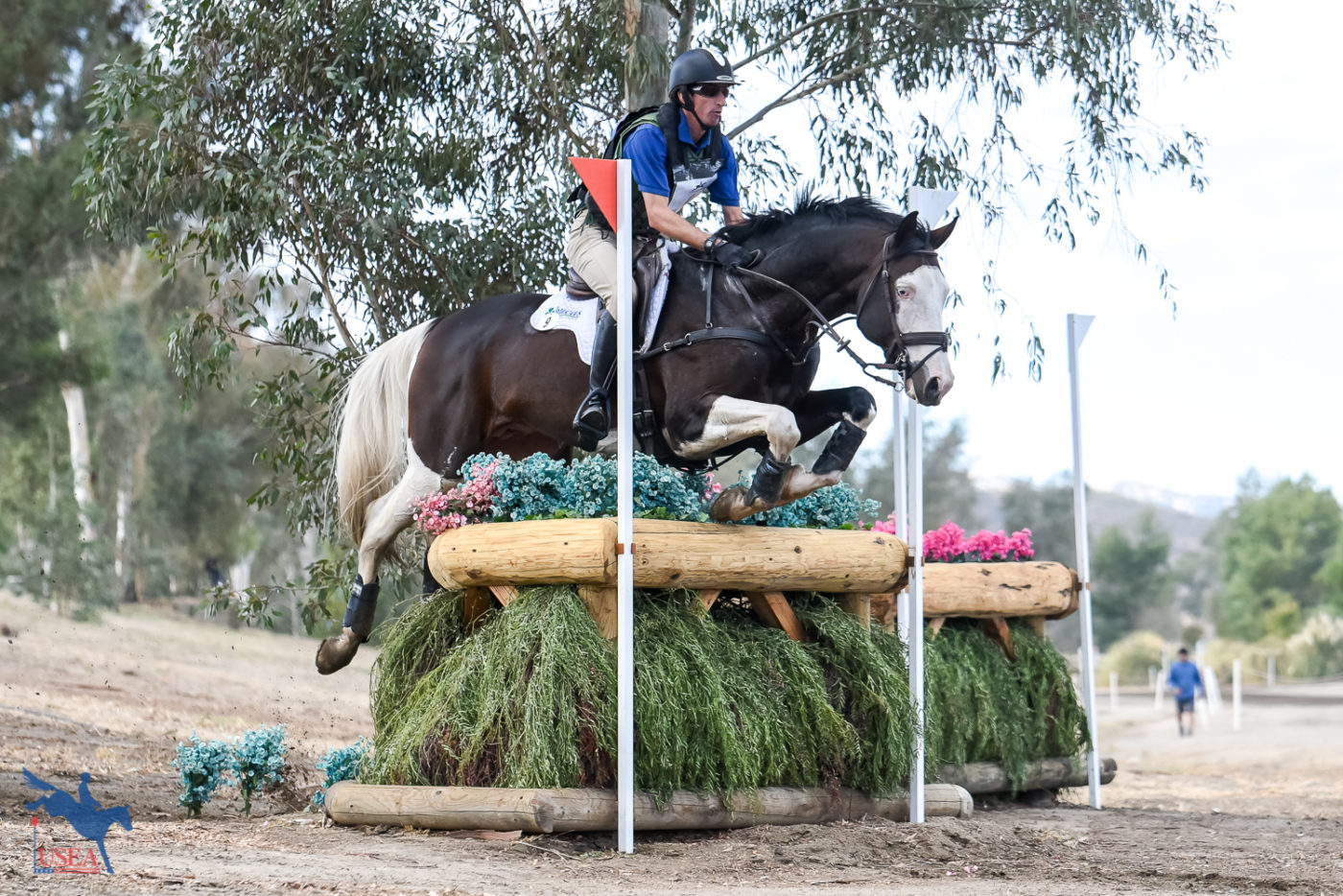 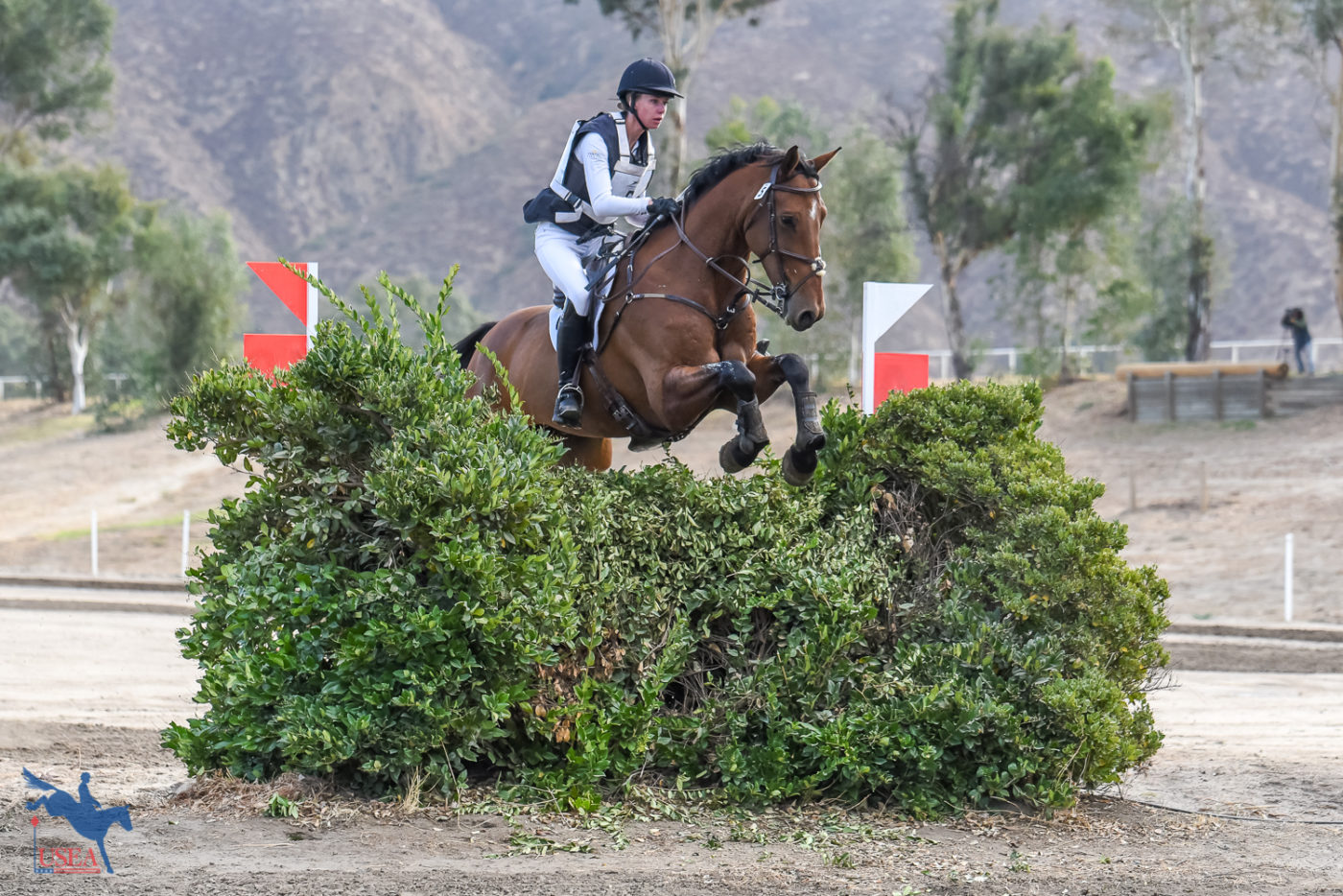 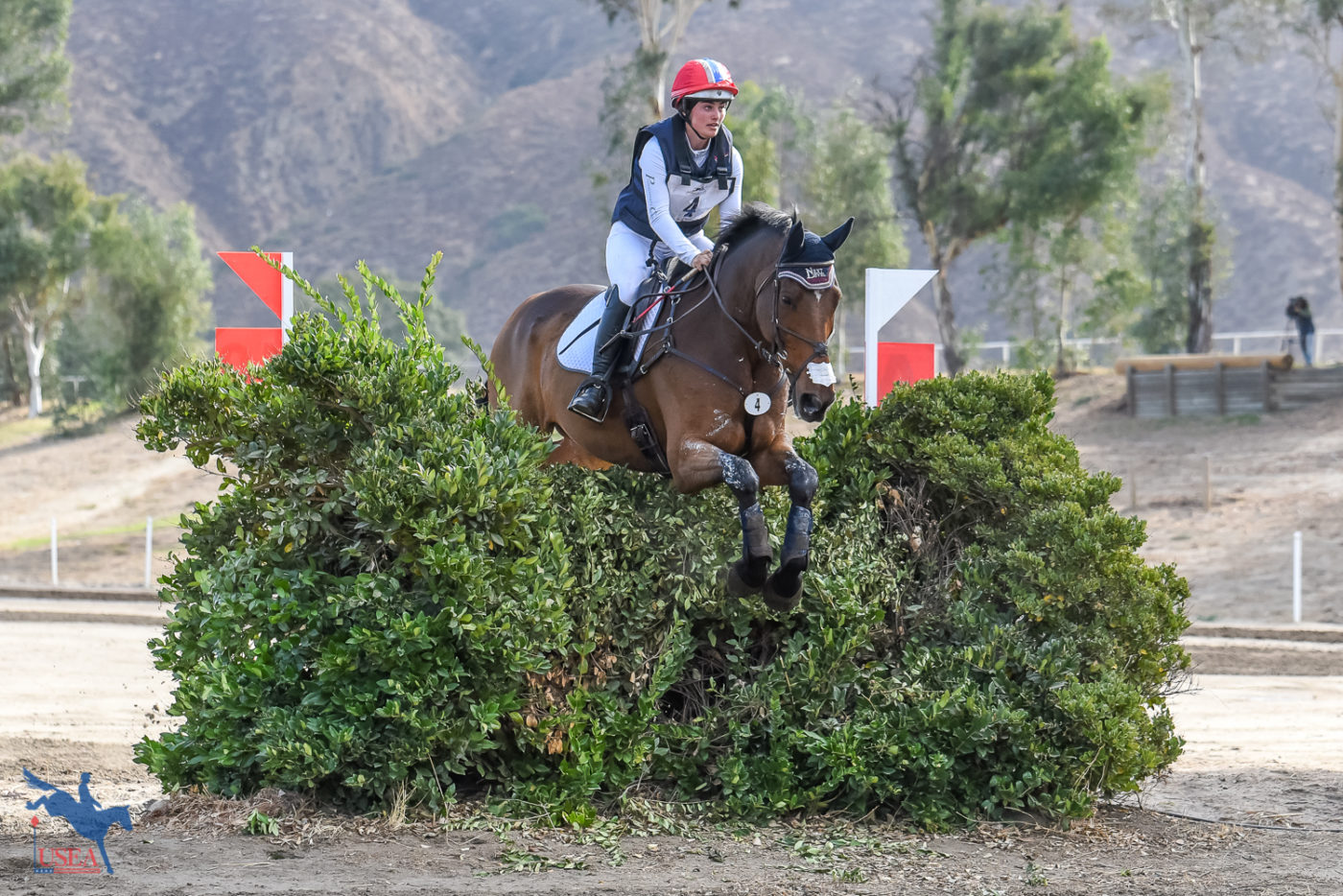