When Auburn University’s Alayna Backel jumped the final jump on her cross-country course today you couldn’t even hear the announcer over the mob of Auburn students, fans, and family members standing at the finish flags. As the last member of the Auburn War Eagles team to compete at the 2022 USEA Intercollegiate Eventing Championships, Backel’s double-clear cross-country round with Amy Dobbins’ 17-year-old Halflinger gelding Oliver Twist (Aurora x Ludora de Las Perlas) solidified Auburn’s first victory at the Intercollegiate Championships in three years on a cumulative team score of 79.23.

“I started coming up to the last fence and I started tearing up and I thought, ‘okay I just have to get over it!’ And then I crossed and instantly, tears were just flowing! It feels unreal. I don’t think it’s hit me yet,” said an elated Backel.

Oliver Twist was a catch ride for Backel who rode him for the first time just a week and a half ago, but she had confidence in the pony going into all three phases. Interestingly enough, Backel wasn’t the only member of the team with a history with Oliver Twist. Teammate Grace Montgomery had previously competed the pony previously before he made a trek around the U.S. to teach other riders, only recently having made his way back to Alabama to run amoeba level with his leaser’s 8-year-old daughter.

“I ran Novice with [Oliver Twist] four years ago and then he was sold to a person in Arizona and then they sold him to someone in California where he did the jumpers,” Montgomery shared. “And then he ended up back with his original owner which I think is so awesome. This weekend he was a catch ride for Alayna and it makes my heart so happy to see them together.”

Montgomery was the first member of the Auburn War Eagles to compete on Sunday with Alexandra Green’s 9-year-old Irish Sport Horse gelding Fernhill Wonder (Farfelu de Muze x Cherokee Bella m2s). Despite having been out of the competition atmosphere for nearly a year, she tried to go into her cross-country round with a clear mind, a mindset that would not only benefit her team but would also leave her with a blue ribbon in the Open Novice A division at the conclusion of the competition.

“I felt like there was a little bit of pressure because I was the first rider to go for the team,” she shared. “I haven’t been out in so long but [Fernhill Wonder] was just perfect and we had fun. He’s pretty experienced, he’s done up to the two-star, and he just was just perfect this weekend. It’s been amazing.”

Galloping out of the startbox for the last time for Auburn University was recent graduate Gabrielle Yashinsky with her own 6-year-old Zangersheide gelding Sky Full of Stars Z (Rusticus x Little Star Z). The experience both with her horse and her team has held a lot of sentimental value to Yashinsky. “[Sky Full of Stars Z] was a little rockstar today. We had a super positive ride and he was game around the whole thing. I just made sure to reinforce at every jump and we got it done and we got a double clear to end the weekend. It’s an awesome way to go out. I couldn’t be more happy for my team and Auburn and it’s the perfect way to end my four years on the team.”

While her fellow teammates galloped around the grounds at Chattahoochee Hills, Kate Midgley and her own 15-year-old Thoroughbred gelding Ditch (by Gulch) closed out their weekend in the show jumping ring with a double-clear round to not only contribute to the Auburn War Eagles’ win but to also win the Preliminary Rider division on a score of 29.5.

“Ditch was awesome,” said a beaming Midgley. “He jumped around double clear. I was nervous going in – our team had a bit of a lead but show jumping can sometimes be our hard phase, but he was perfect. He carted me around and jumped great and I am so happy with him.”

Auburn University not only received the honors of Intercollegiate Champions but they were also presented with the 2022 Spirit Award for their exceptional team spirit and camaraderie that was displayed all weekend long.

Rounding out the weekend in second place was the University of Georgia’s Gurley’s Gone Wild team which is made up of Hannah Ledford, Bennett Smith, and Sierra Shurtz on a final cumulative score of 106.80

The USEA would like to thank all of the Intercollegiate sponsors, Bates Saddles, FITS Riding, Kerrits, Horse & Country, U.S. Equestrian, and World Equestrian Brands, who provided wonderful prizes to the top three teams. 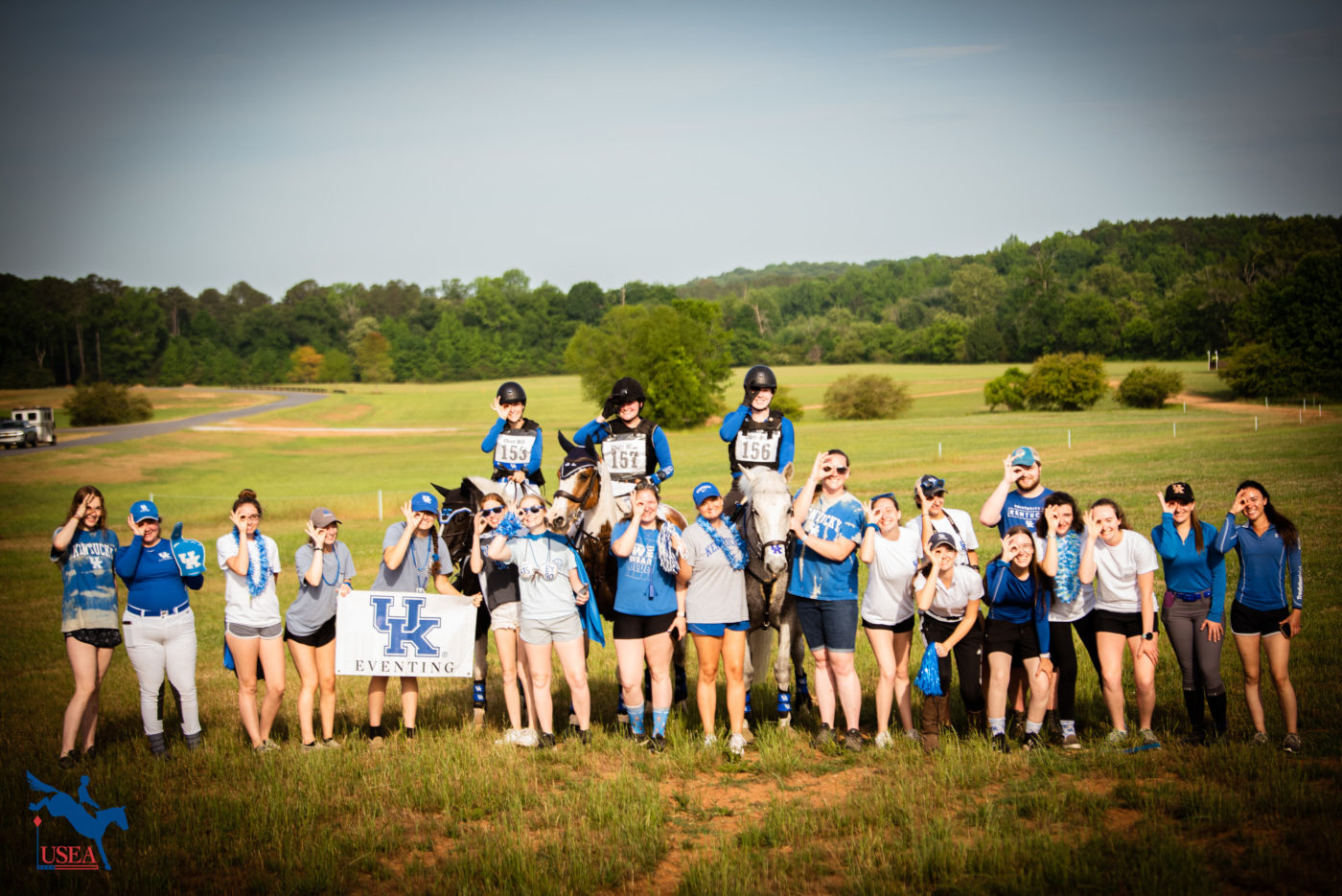 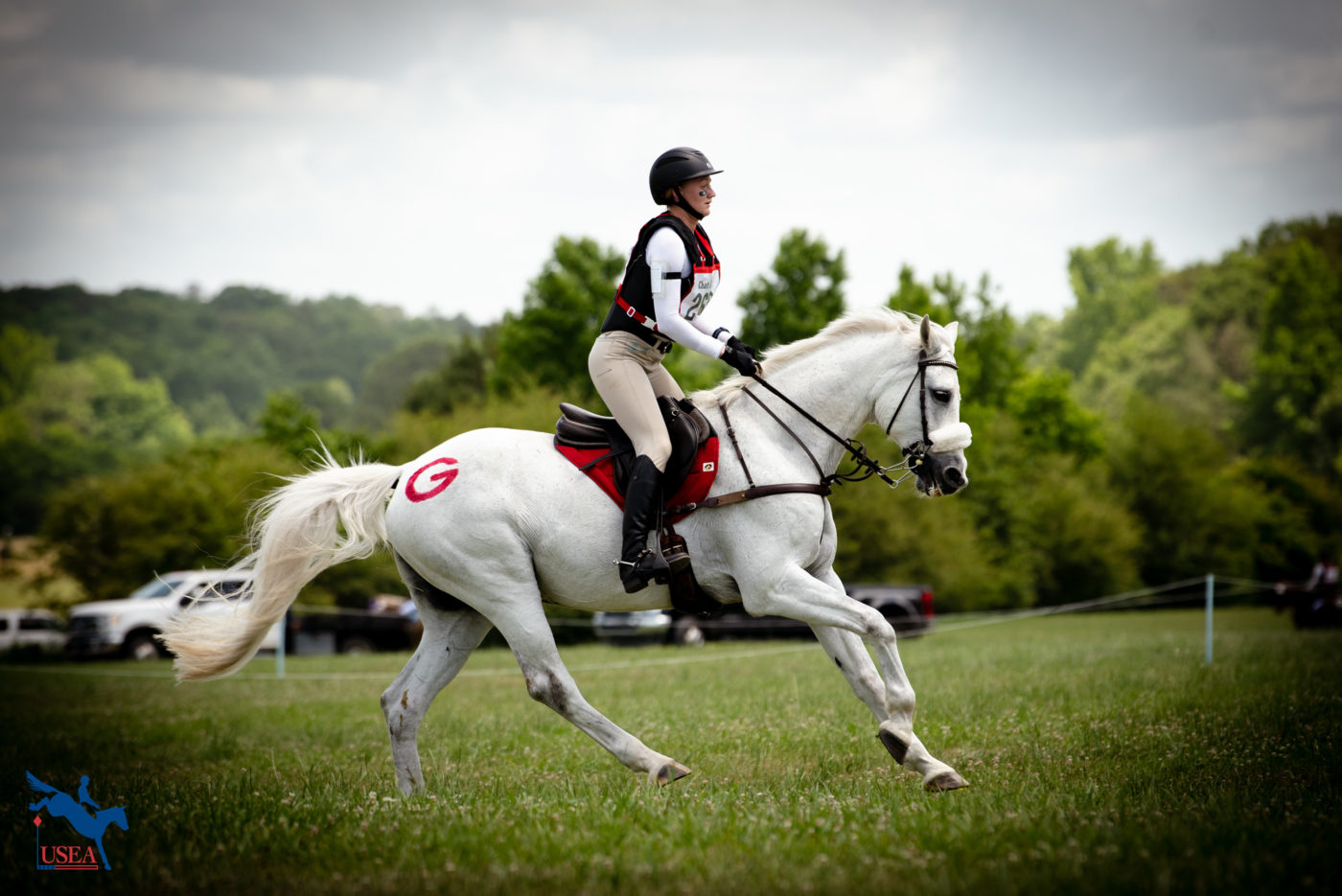 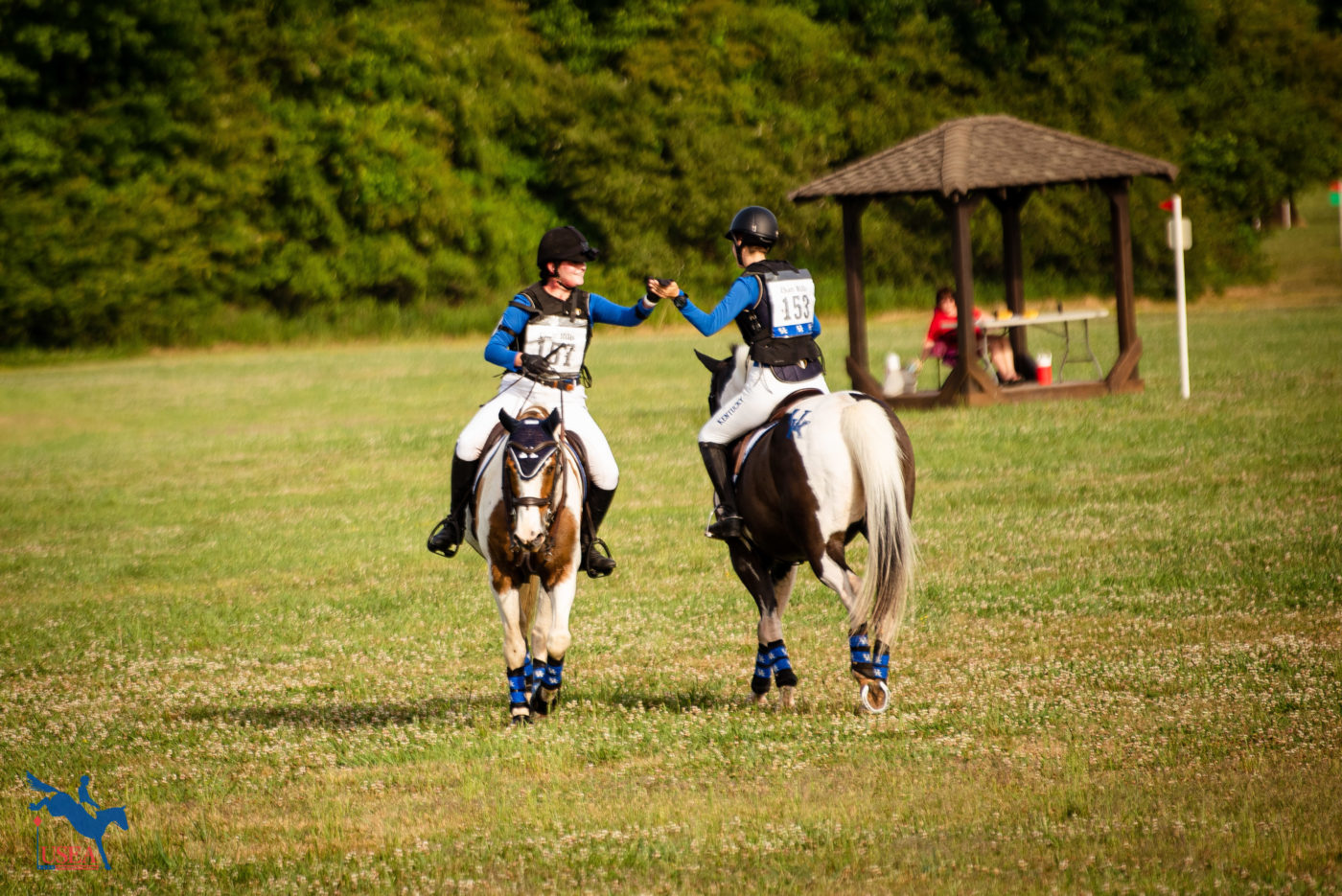 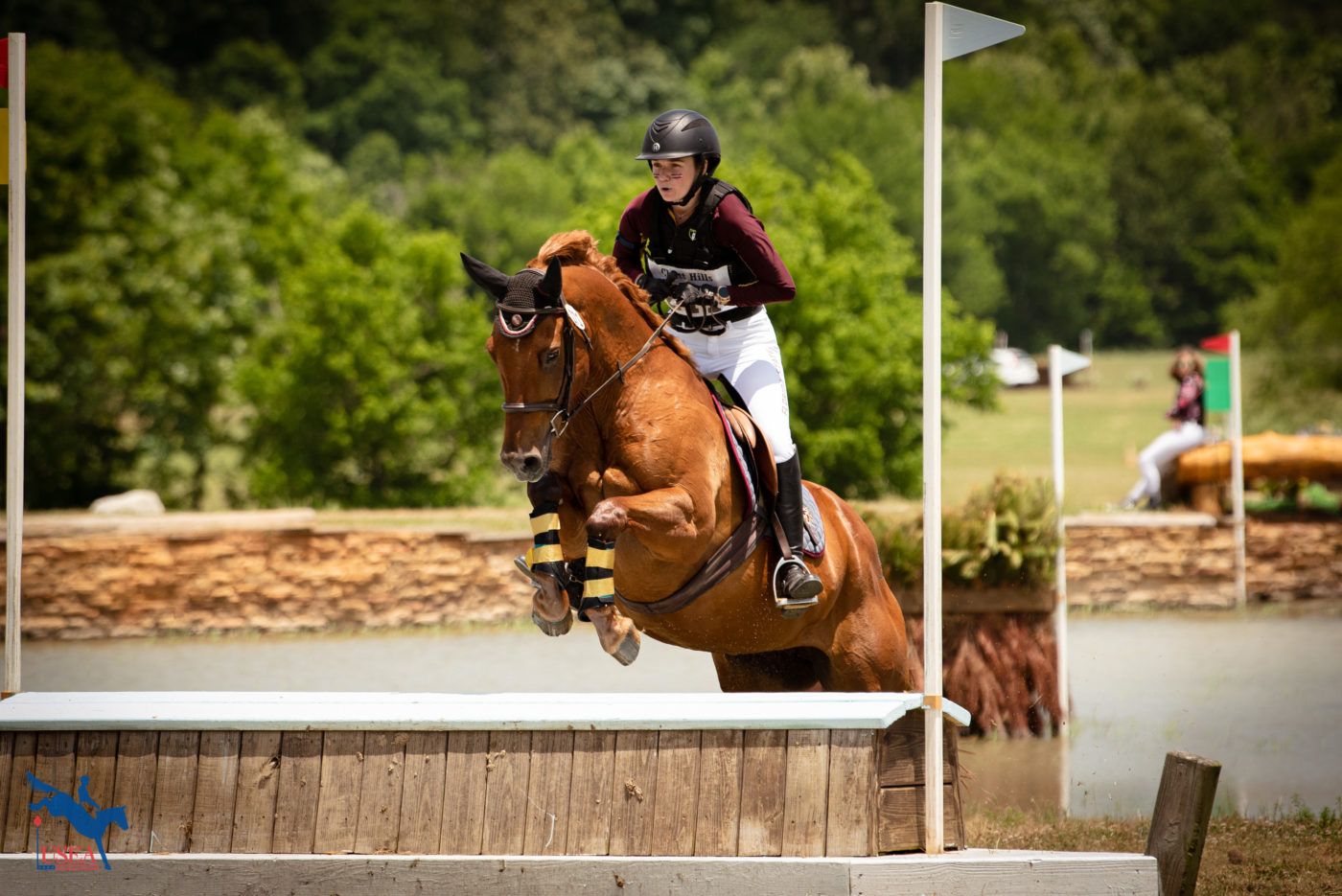 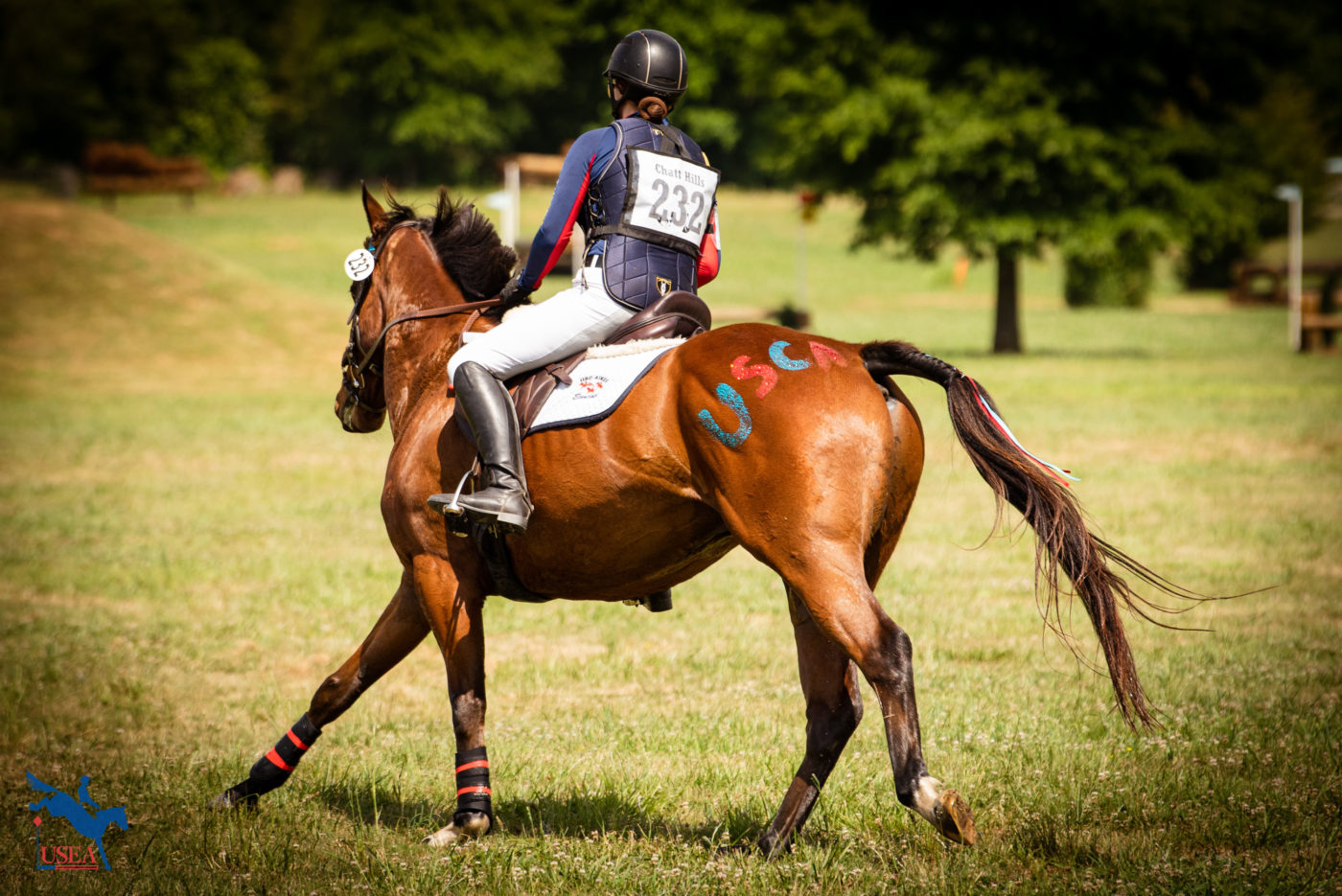 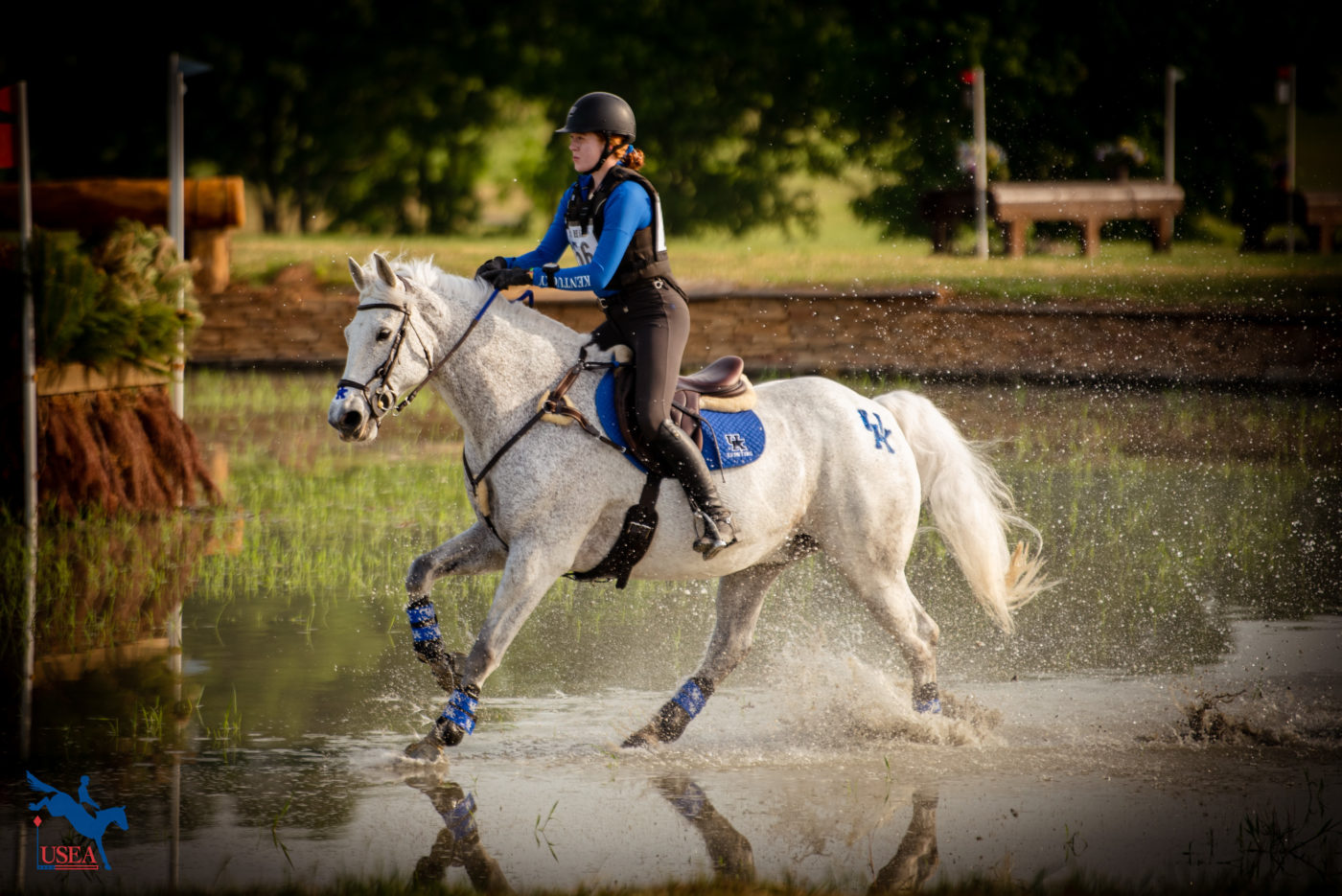 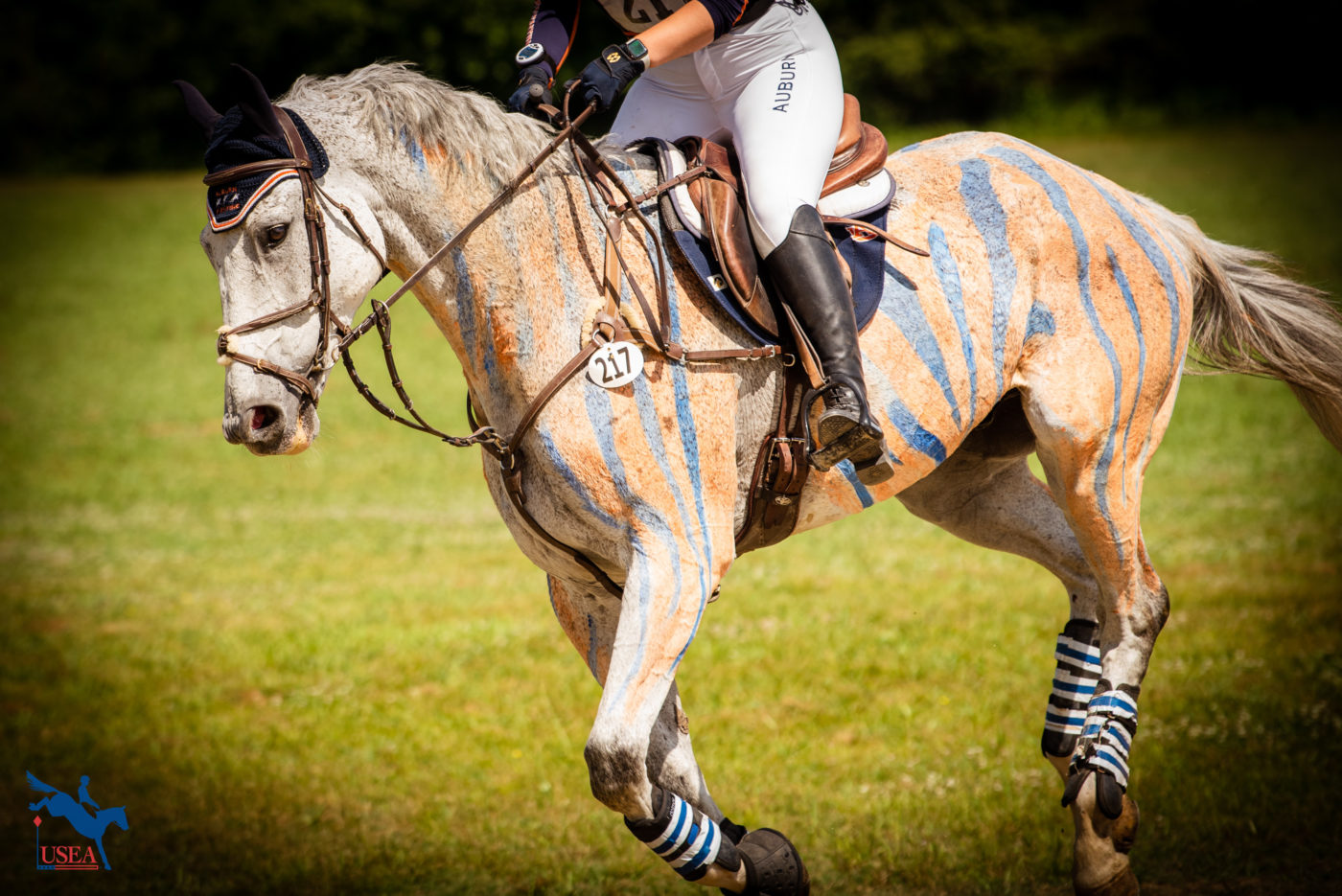 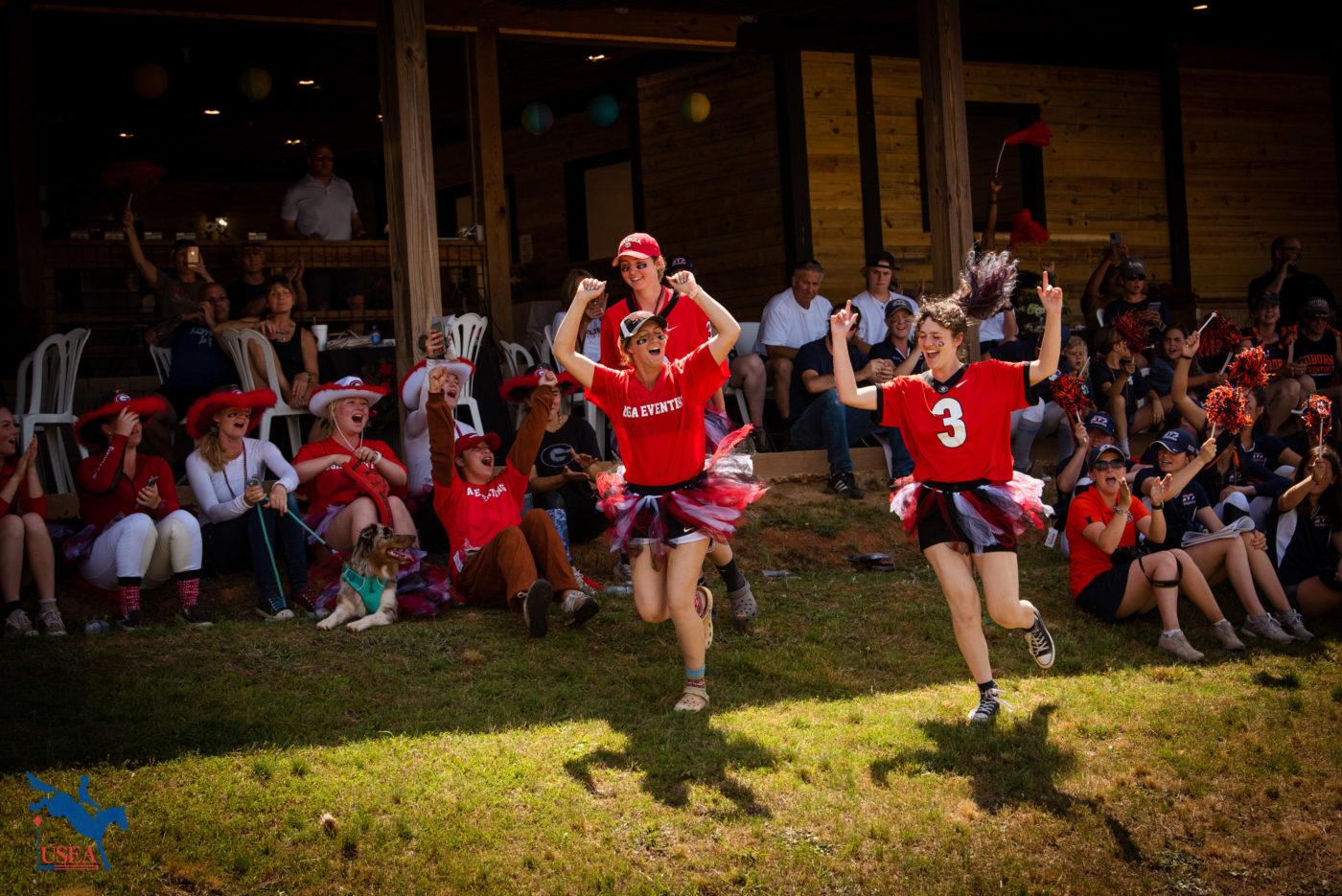 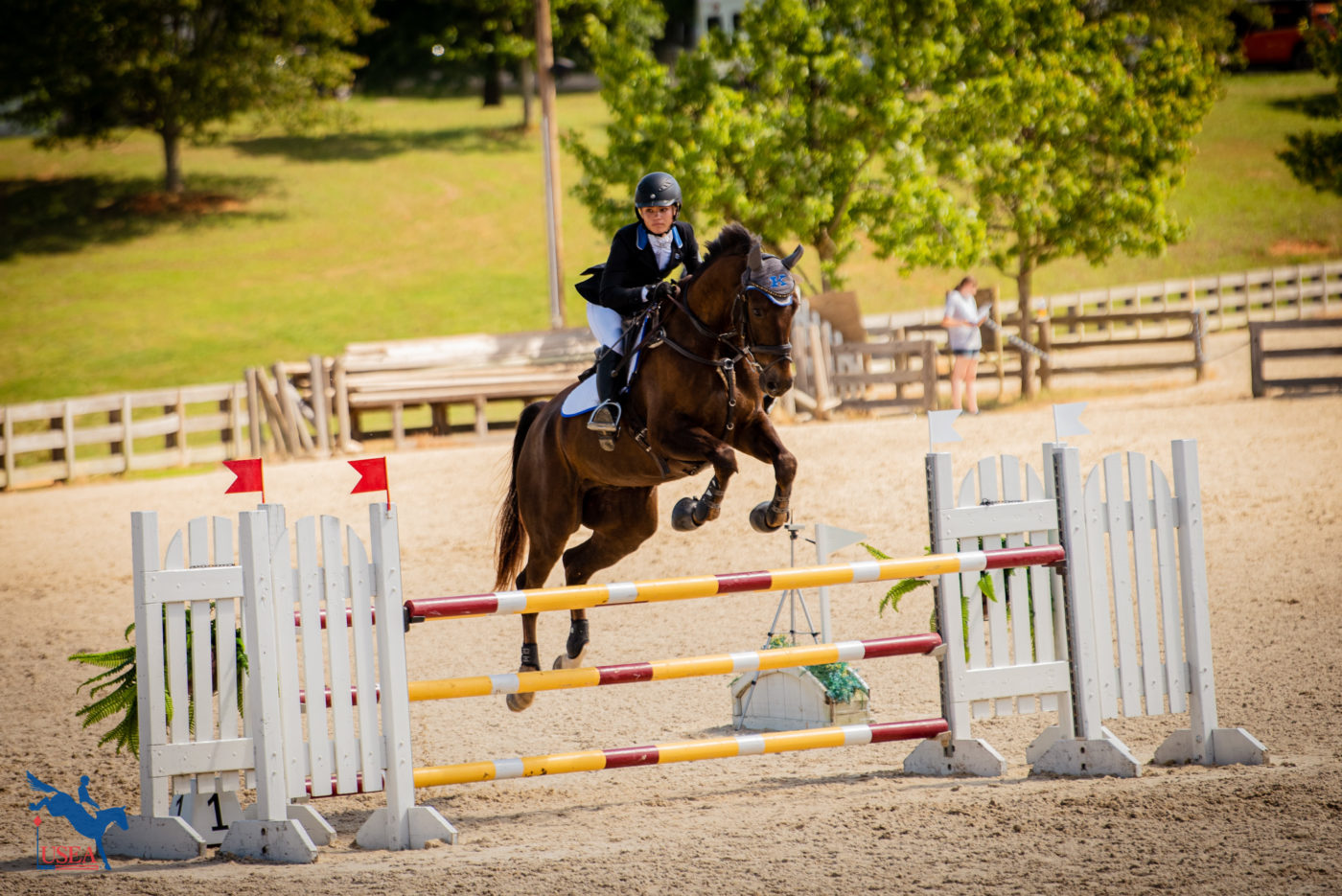 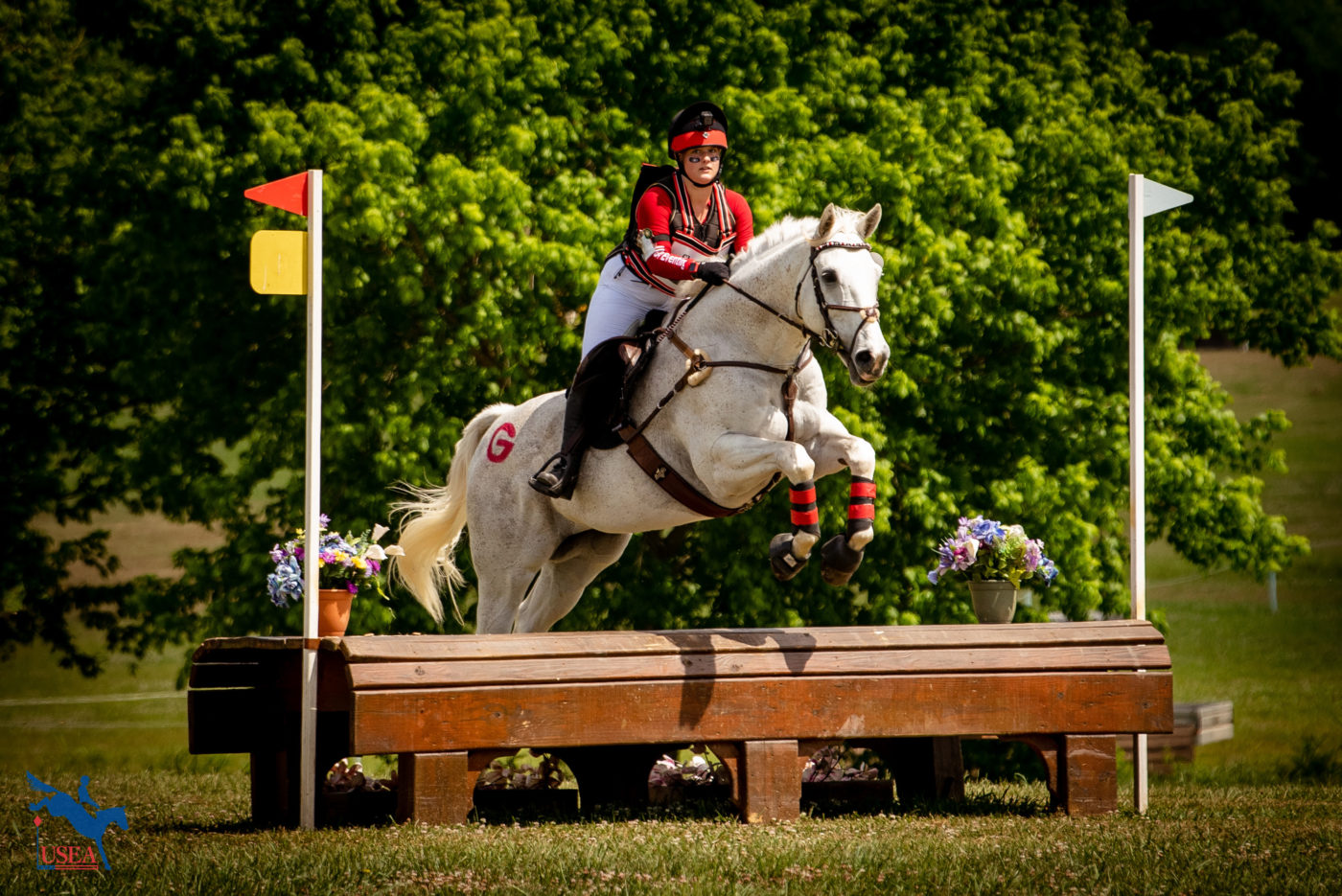 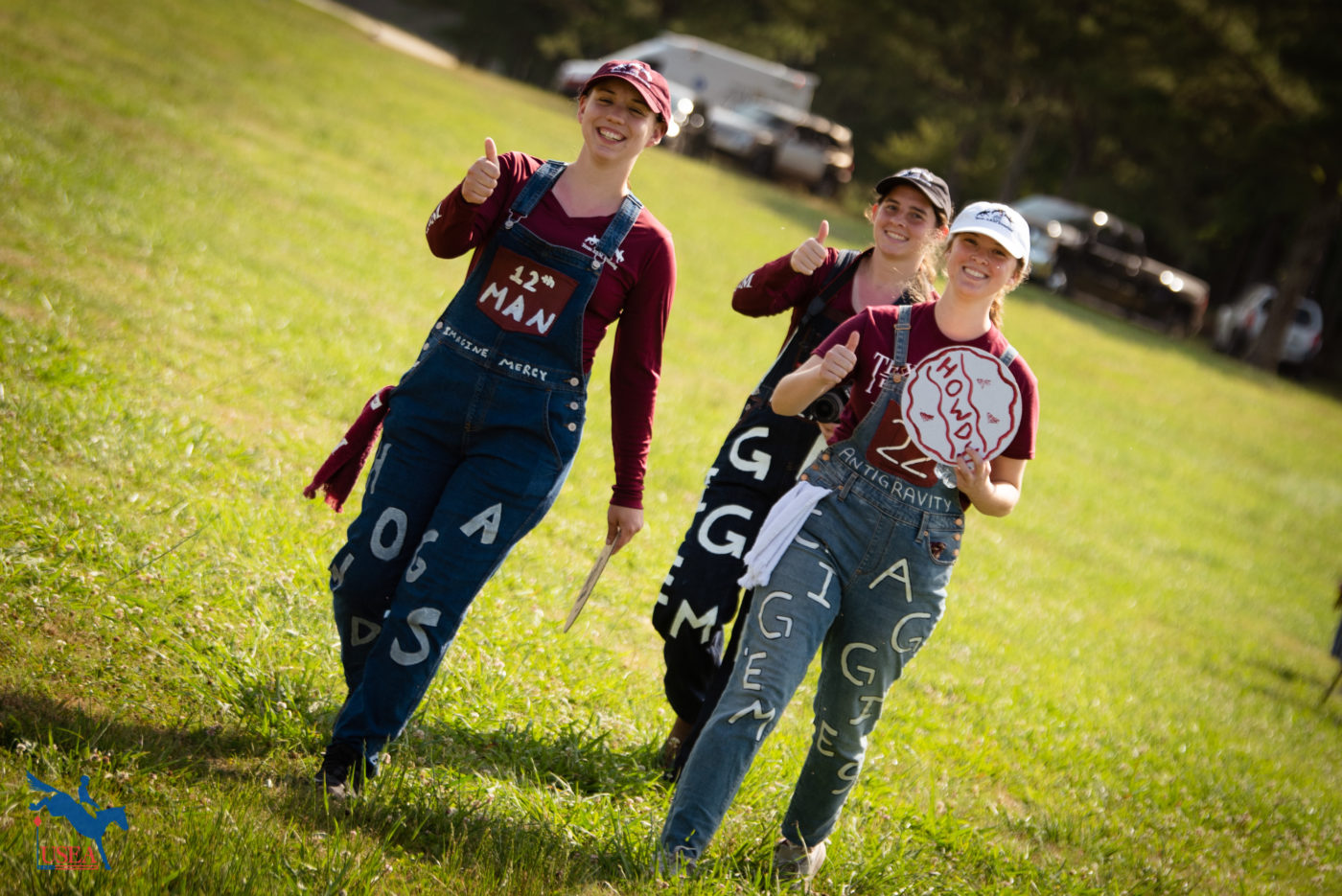 On May 1, 2022, Max Corcoran was appointed as the Eventing Elite Program and Team Facilitator. In her role, Corcoran will support the areas of communication, logistics, and management of the teams for the Eventing Programs to deliver sustained success at World and Olympic Games level. As the Facilitator, she will work closely with the interim Chef d’Equipe/Team Manager, Bobby Costello, and eventing staff to build solid lines of communication with athletes, grooms, owners, coaches, veterinarians, and all stakeholders linked to the athletes and develop the structures around the Elite Program and senior U.S. Eventing Team.

Imagine: you are at the biggest sporting event of your life. The stakes are high, and you have spent countless hours preparing for it. However, you are expected to just show up and immediately perform. You cannot stretch or take a practice swing. You have no time to loosen up or sharpen your eye. Sounds like a recipe for disaster, right? Just like us, our horses need adequate time to warm up each day. A warmup is any preparation for work, and it is often the leading edge of that work. It is the small aid response that becomes the more advanced aid response.

This year a new class will be joining the 47 eventing legends currently in the United States Eventing Association (USEA) Eventing Hall of Fame. Induction into the Hall of Fame is the highest honor awarded within the sport of eventing in the United States. Those invited to join the USEA's Eventing Hall of Fame have truly made a difference in the sport of eventing. Hall of Fame members have included past Association presidents, volunteers, riders, founding fathers, course designers, officials, organizers, horses, horse owners, and coaches

Rule Refresher: What Will Be Expected of Me at the Training and Modified Level?

Preparing for your first horse trial and not sure what is expected of you at each level? Over the course of the next few Rule Refreshers, we will be diving into each level and the performance expectations of each phase. Want to better prepare yourself or your students for their first competition or a move-up? The USEA Eventing Handbook by the Levels is a free resource to all USEA members that outlines clear and consistent guidelines for riders and trainers to refer to when navigating their way through the competition levels.