Lynn Symansky and Mary Ann Ghadban’s Under Suspection jumped a clear round in front of the crowds this afternoon to maintain their lead in the CCI4*-S at the MARS Great Meadow International in The Plains, Virginia. Symansky and the 15-year-old Holsteiner mare (Contender x Naomagic I) sit on a two-phase score of 25.0 going into tomorrow’s cross-country finale.

“She was very quiet all afternoon and got up there and warmed up great, she was a little more quiet than normal, and then I got down the ramp to get down there and she certainly ramped up a bit,” Symansky described. “She really tried her heart out - she was jumping great.”

“She has a tendency to be a little bit low in her style compared to what I’m used to – something that is a little more up in front of me,” she continued. “But the horse tries her heart out and she has her own way of jumping and you have to not fight that and figure out how to let her use her body . . . I was very happy with her because it’s been a struggle this season with one unfortunate thing after another. I’m very happy for her owner Mary Ann Ghadban to have her going into the lead going into cross-country on her home turf.”

Symansky was pleased with what she saw when she walked David O’Connor’s course. “I did a quick cursory walk but there are no big surprises out there,” she said. “I think the corners are going to ride very hard even though they are not in the arena this year. They are just big and imposing and come at you. Everything is very fair and the ground is good and the course is beautifully presented and I’m looking forward to getting out there tomorrow.”

“I will say, I am a little lighter on fitness and gallops going into this summer/fall season . . . so I’ll go as quickly as I’m comfortable on her. It wouldn’t be a place where I would be going really fast just because we are a little lighter on gallops. She is fit and ready to go do something, you have just got to feel how the horse feels like on the day and she hasn’t had that many runs this spring and summer. I am looking forward to finally going out there and finding something we can attack.”

“He was absolutely excellent,” Payne stated. “ We went in just to have an efficient, smooth round and he jumped great. Time-wise it was helpful to take the one inside turn from the triple to the red – he cut off a fair bit. He’s an efficient horse as it is.”

The pair are headed for Burghley in two weeks and this is their final prep run. “I’ve been in the last year trying to be as smooth as I can and just make it easy on him and let him use his body as best as possible. I was lucky enough to be able to pull that off.”

With Burghley in mind, Payne plans to give “Quinn” a steady, confidence-building round without worrying about the time. “He’s a pretty efficient horse – I’m not going to go crazy to make the time. We’re just going to go for a smooth run. I think there’s a couple of really good questions that will benefit him. After Kentucky he’s just been to Maryland in the Intermediate so it’ll be good to get him out on course again. I think it’s a very good prep for him.”

“We’ve been working really hard to change both of our attitudes towards show jumping,” Rutledge said. “We’re definitely taking some of the right steps. I’m incredibly pleased with how he’s feeling.”

“We both would tend to get a bit panicky and a little bit worried so we went back to the drawing board a little bit,” she continued. “I decided that if I’m going to take rails, I’m going to take rails because I’m trying to set him up correctly rather than let him make poor life decisions. I’m super pleased with how he went today because he’s trying so hard to actually do what we’ve been working on and he’s trying to do it in the ring.”

Hannah Sue Burnett and Lukeswell (Puissance x Gentle Servant), the Lukeswell Partnership’s 14-year-old Irish Sport Horse gelding, jumped a double clear round to move up into fourth place on a score of 29.6.

“Well he’s a very good jumper . . . he wants to jump carefully and cleanly,” Dutton commented. “He was as good as he’s been, especially as that is a great arena to go into with atmosphere. Being a green horse, I thought he handled himself well actually. It was a tough enough track without being unfair.”

Looking to the cross-country tomorrow, Dutton said he’s looking forward to the test it will present for “Ollie.” “Whoever ordered the rain, they did a very good job. It’s a pretty testing cross-country so I think it’s going to be a good education for my horse.”

Sharon White and her own 7-year-old Holsteiner gelding Claus 63 (Catoo x Tina II) moved up from fifth to third, picking up just a single second of time to sit on a score of 31.9.

Will Coleman and Chin Tonic HS, Hyperion Stud’s 7-year-old Holsteiner gelding (Chin Champ x Wildera), rose steadily up the leaderboard this weekend to ultimately claim the win in the CCI2*-S on a score of 25.0. Coleman has been working with Chin Tonic since he was a 2 ½ year old.

“We’re really excited about him,” Coleman shared. “He’s a lovely type, probably as good of a horse on the flat as I’ve ever had and he’s really taken to the sport. Vicki [Castegren, of Hyperion Study] has got a wonderful perspective on horses and sport and eventing. She’s been a big supporter of mine and I’m hugely appreciative of that support. This is a really fun horse for us because it’s very representative of the type of horse that she’s trying to breed – a great athlete with a great mind that can do a lot of different things. We’re having fun with him and I owe a lot to her. I hope we can take this horse and fulfill all his potential.”

“I thought he did a nice test,” reflected Coleman. “He can probably do better but he did a very nice test – got a 25. I thought he jumped a super show jump round this morning, I was very pleased with that. And then on the cross-country he just continues to get better. We’ve taken our time and we’re under no pressure to rush him up the levels, we really are giving him as much time as he needs at each phase and I think that patience is starting to bear fruit.”

Lynn Symansky and SpectraVET Tempranillo, her own 8-year-old KWPN mare (Boss x Zadina Mail VDL) also made a climb up the leaderboard to go home with a red ribbon on a score of 26.1. Catherine Pournelle and her own MTF Cooley Knight (Lancelot x Sea Bright Clover), an 11-year-old Irish Sport Horse gelding, had a fault-free weekend to finish the weekend in third place on their dressage score of 27.9.

Cross-country for the CCI3*-S and CCI4*-S takes place tomorrow morning beginning at 9:00 a.m. and 12:00 p.m. respectively. The event will be live streamed on EQSportsNet.com. 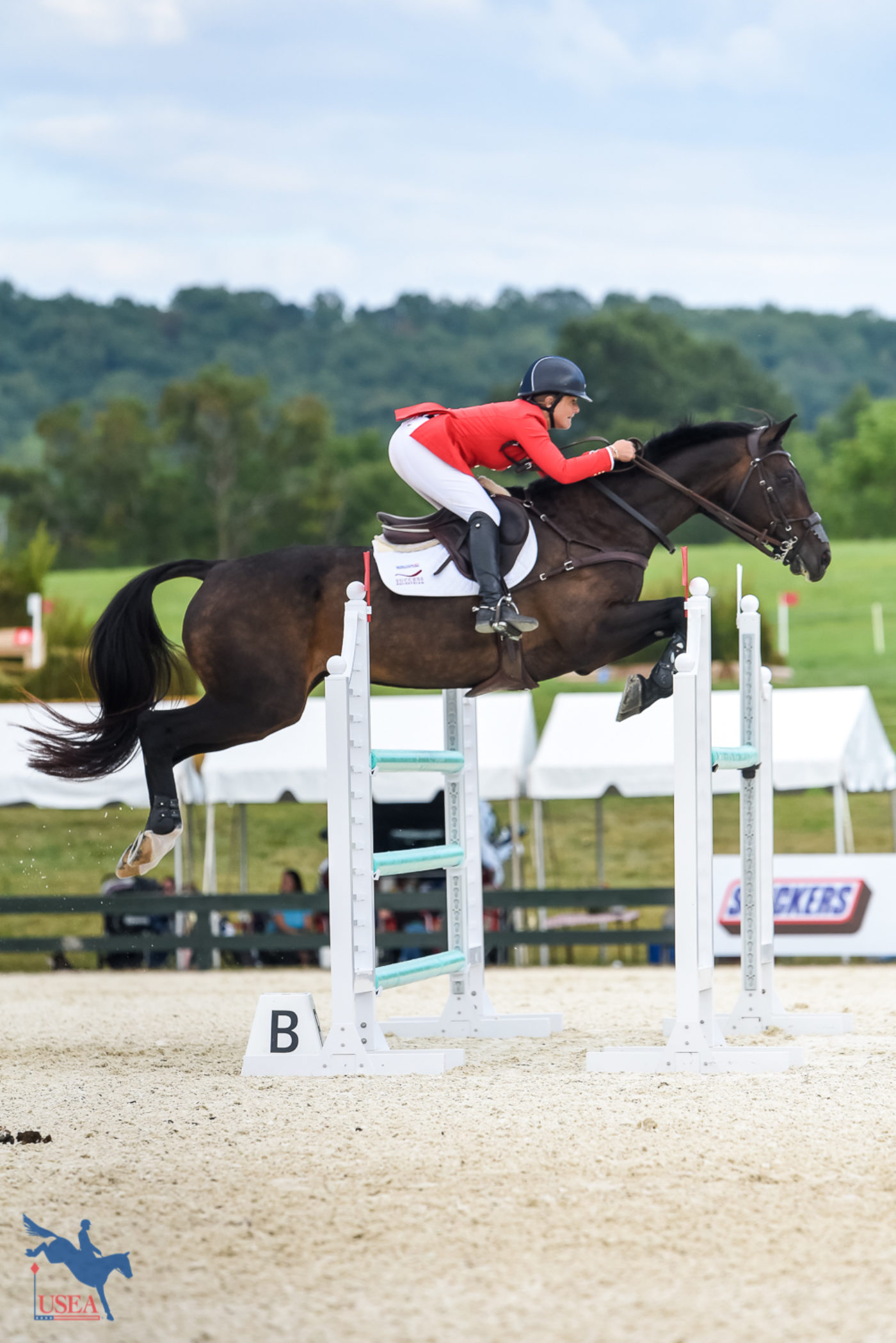 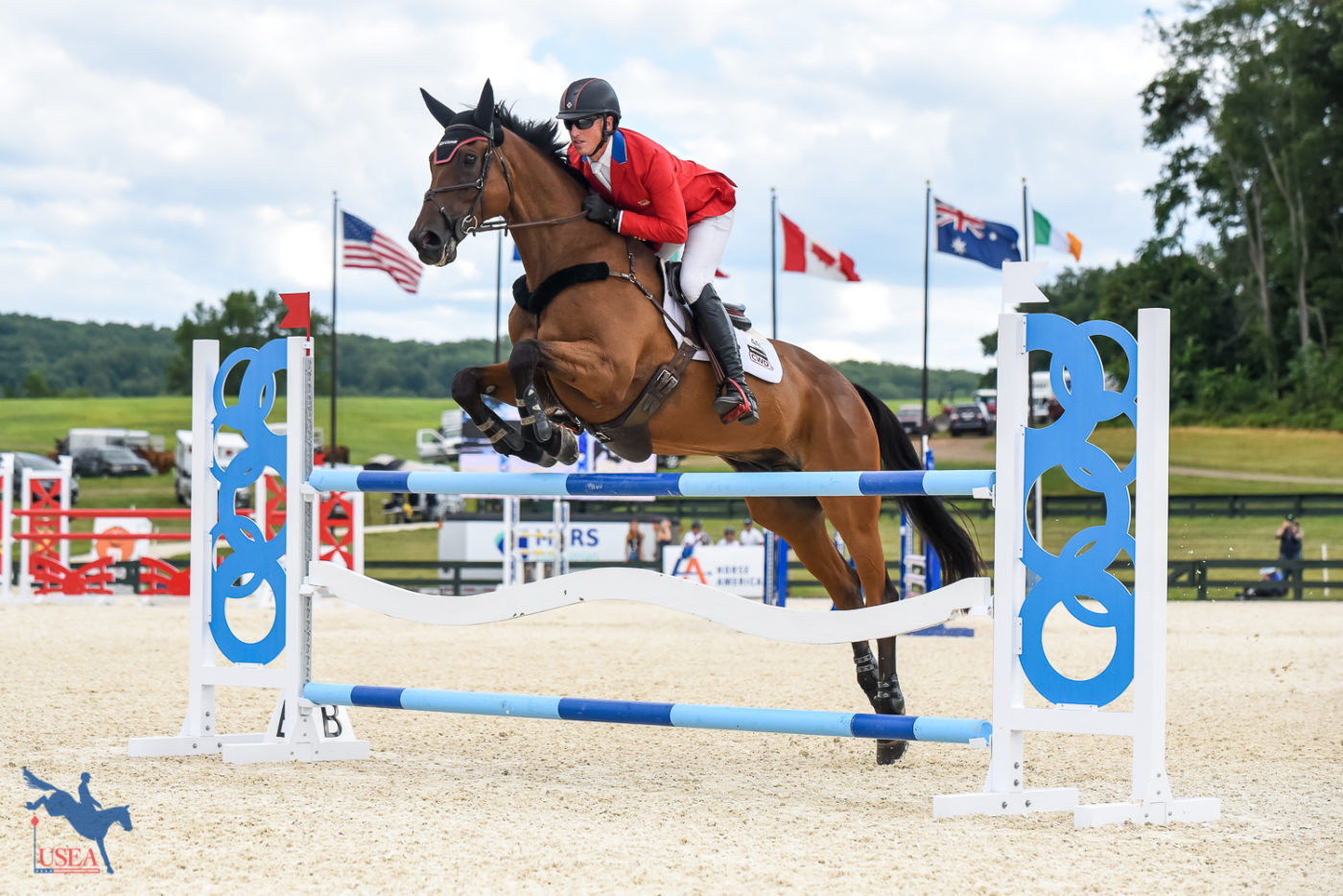 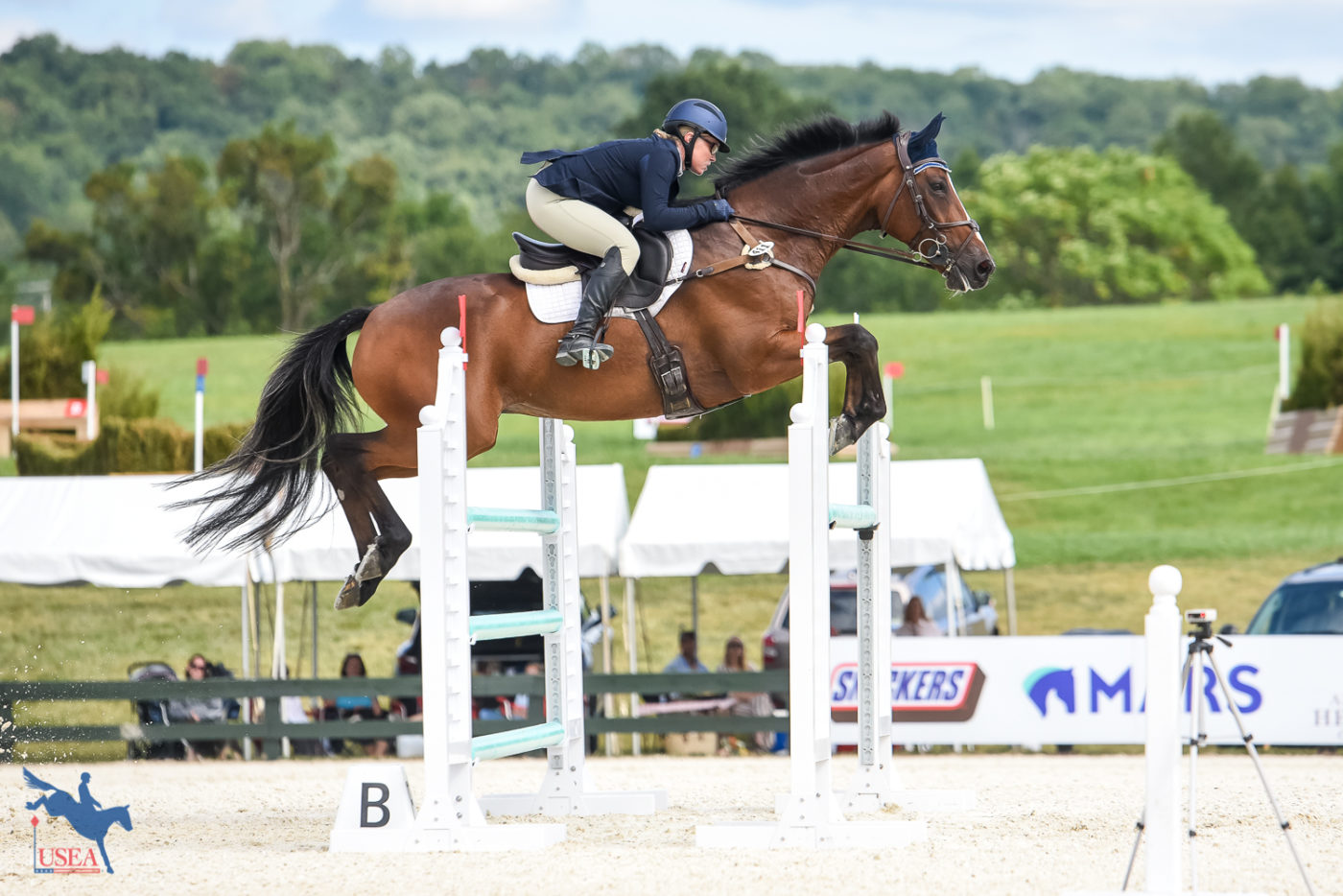 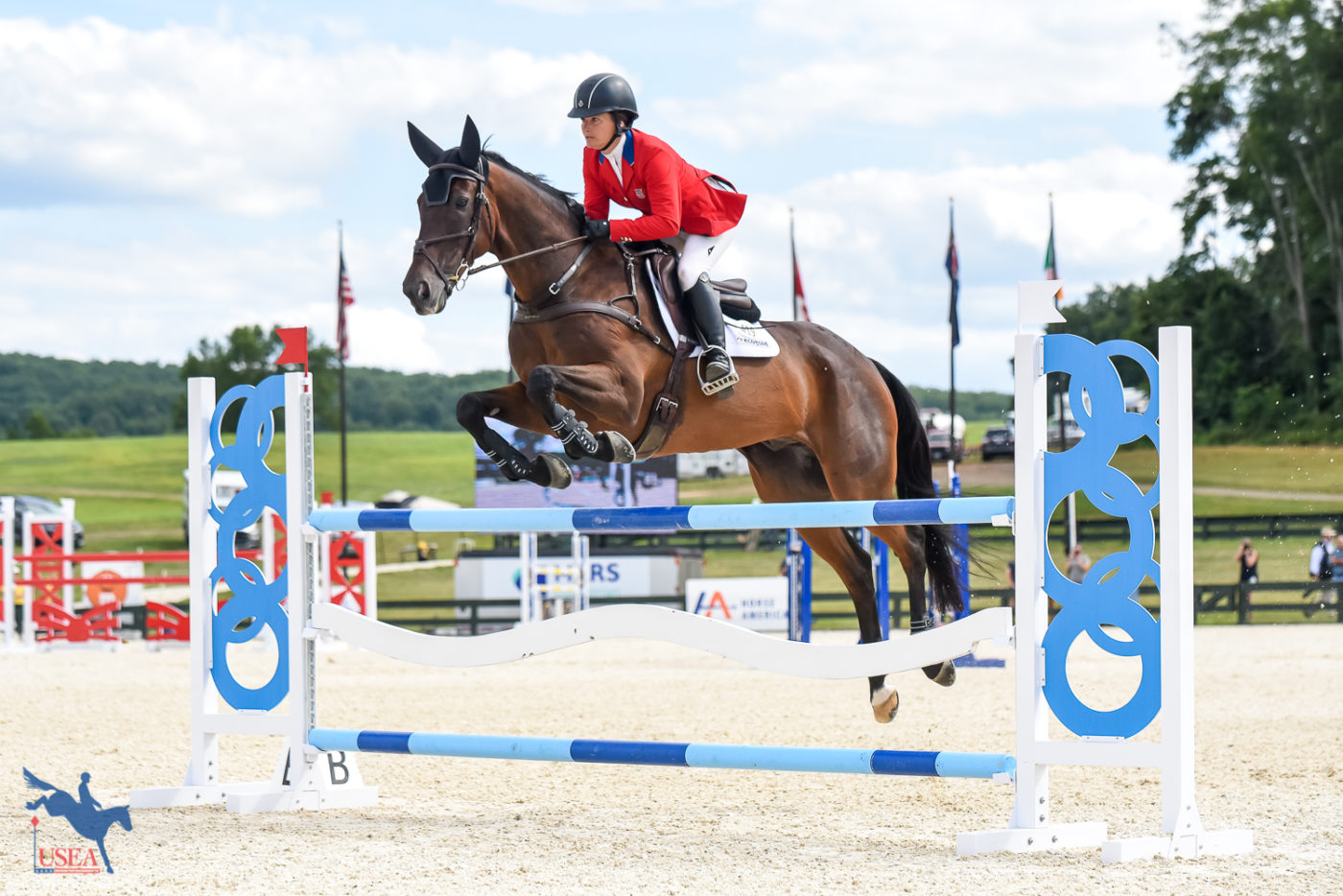 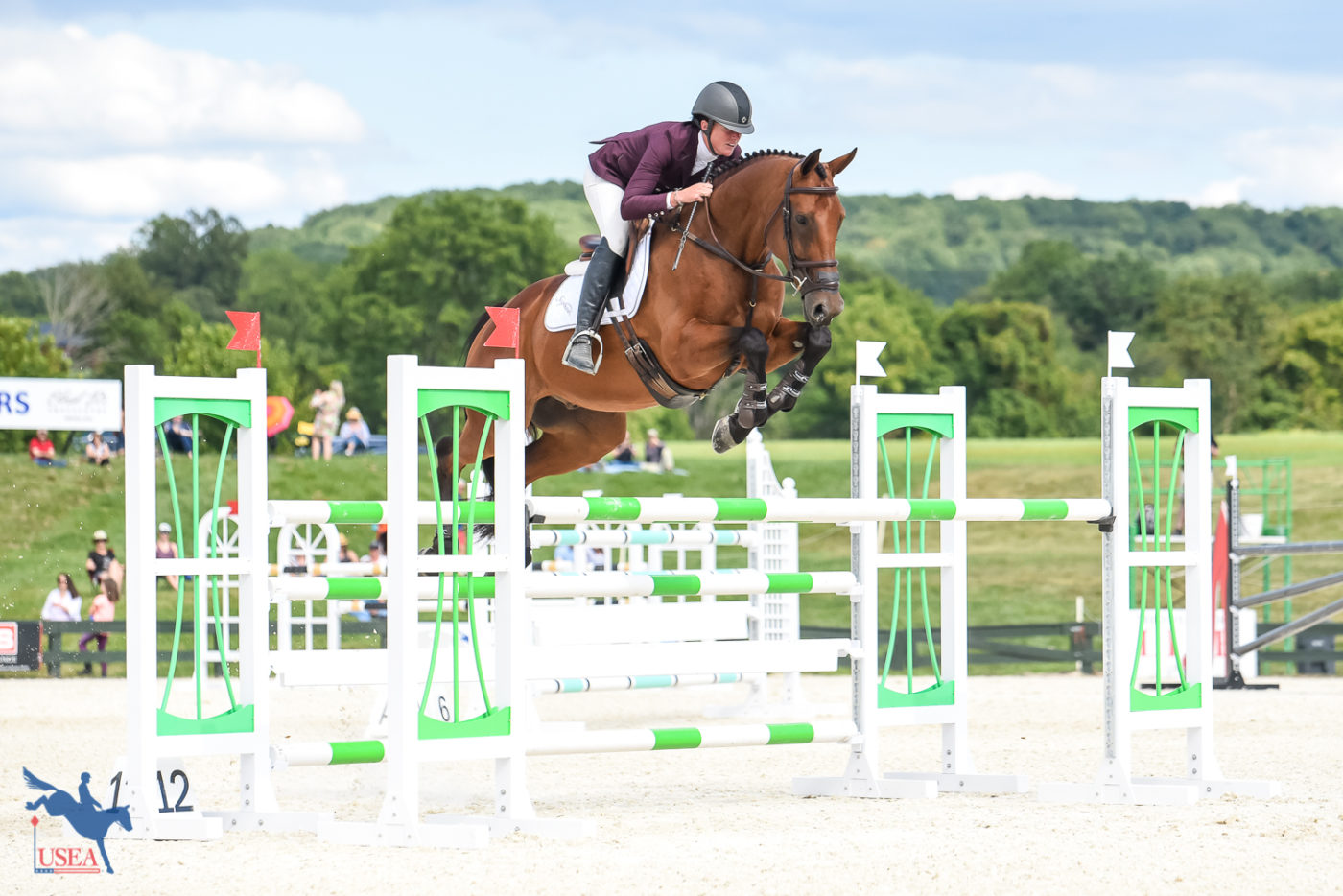 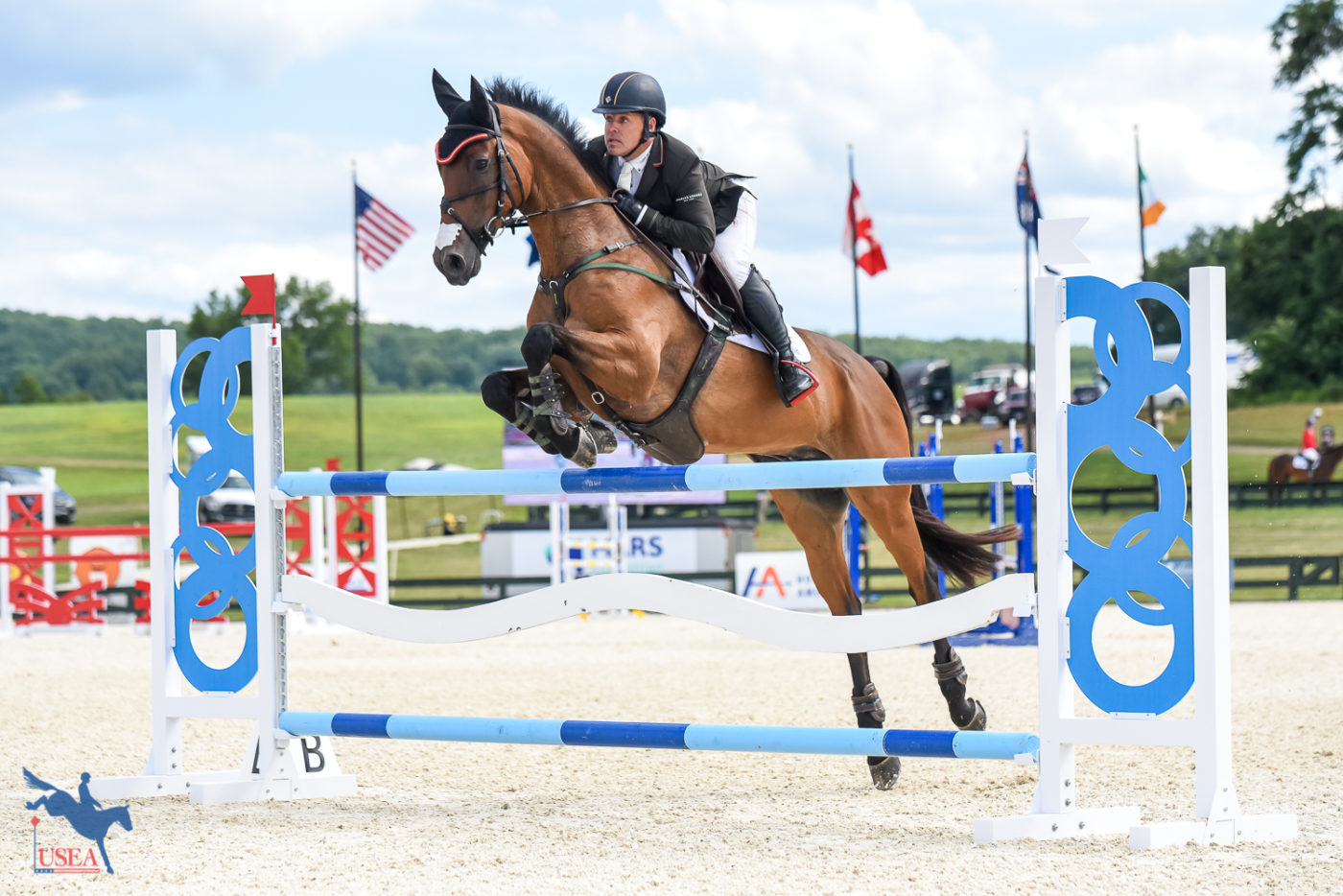 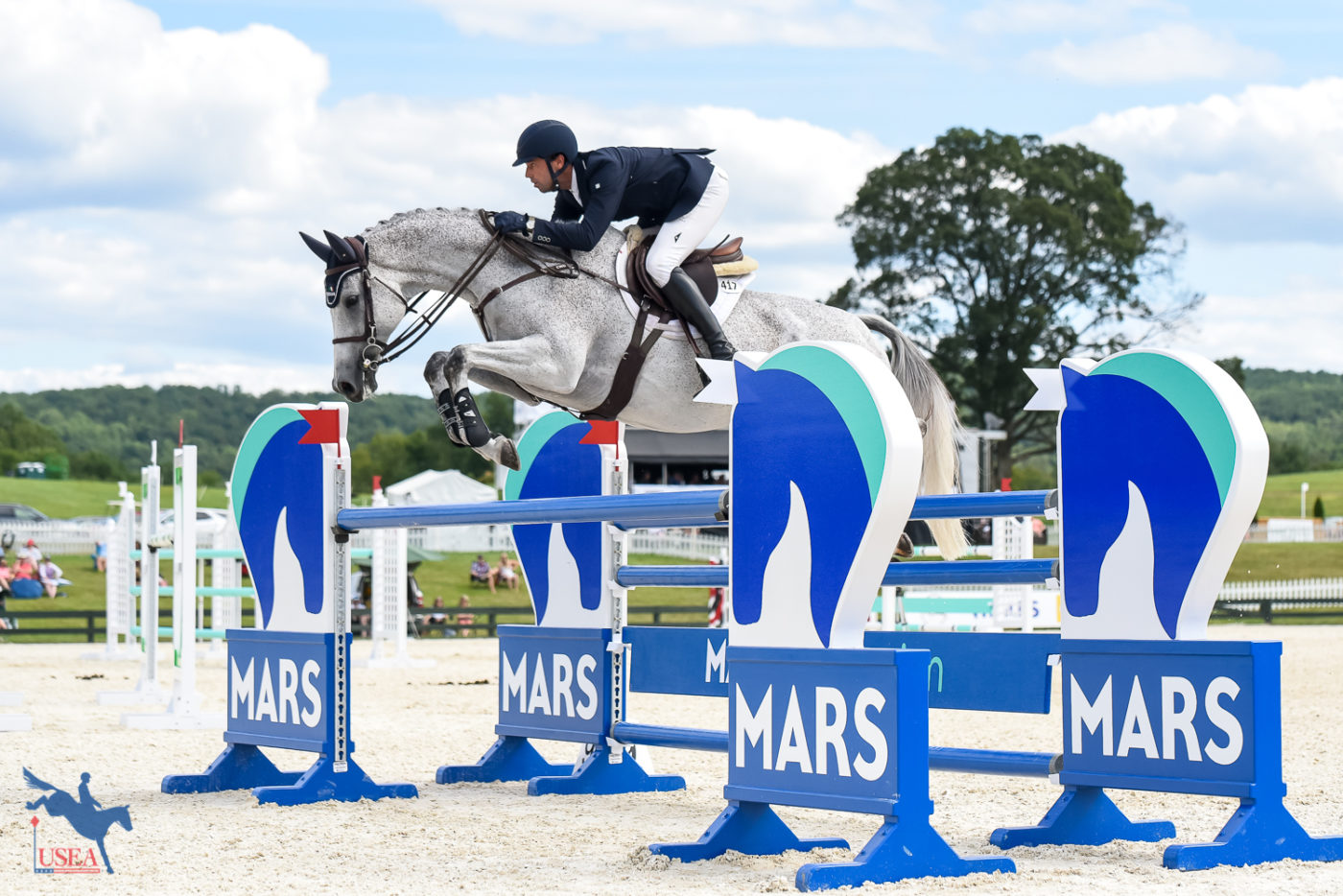 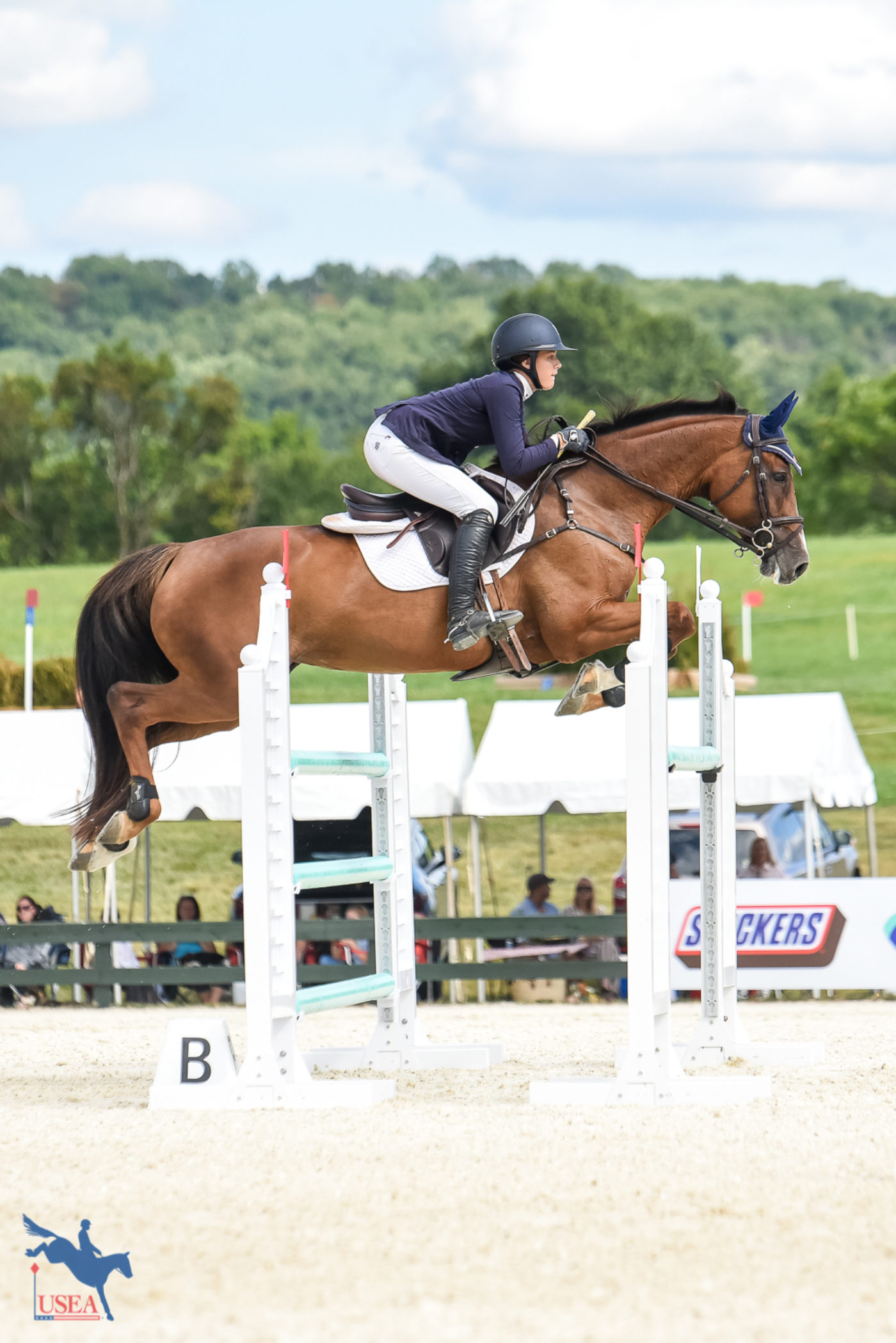 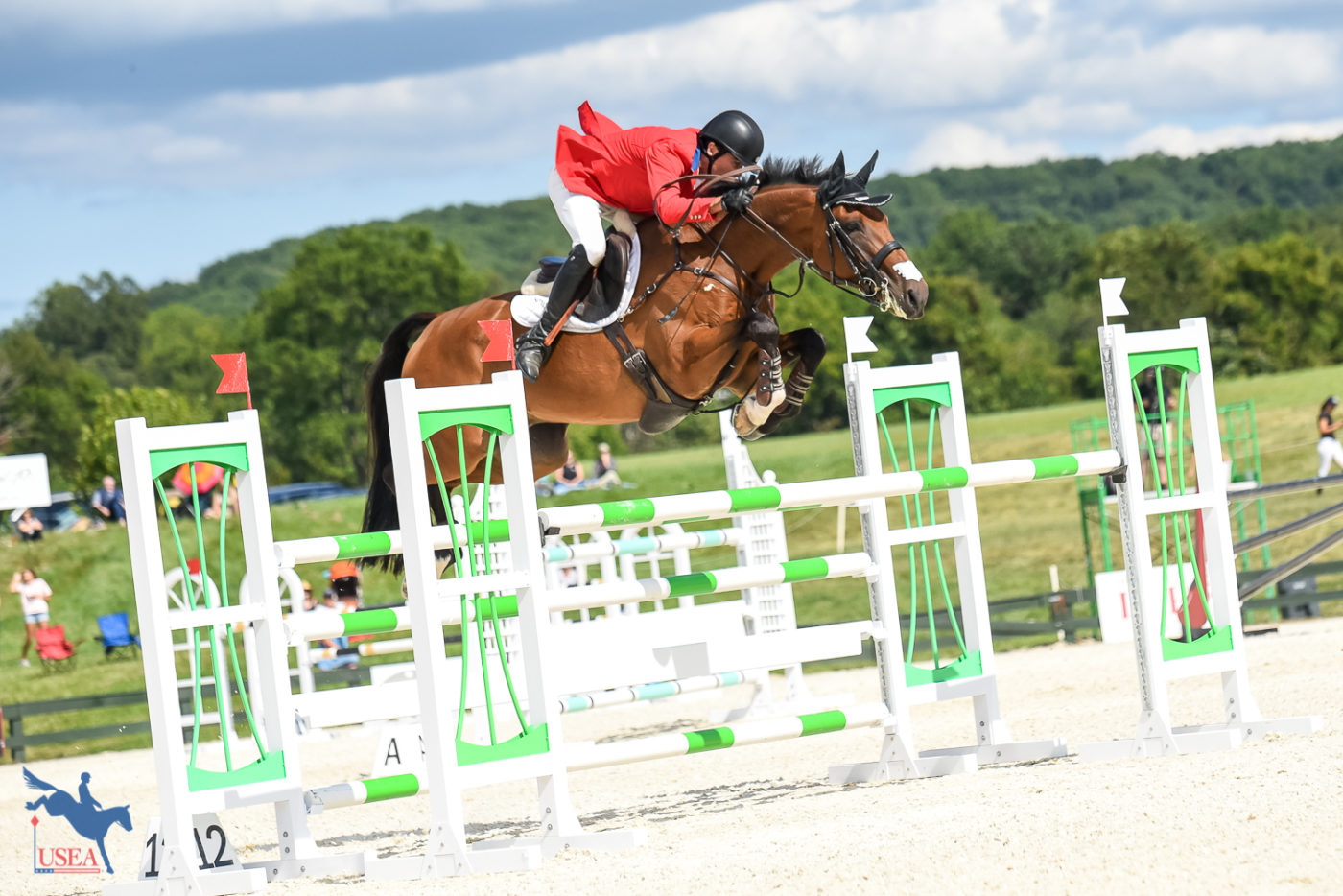 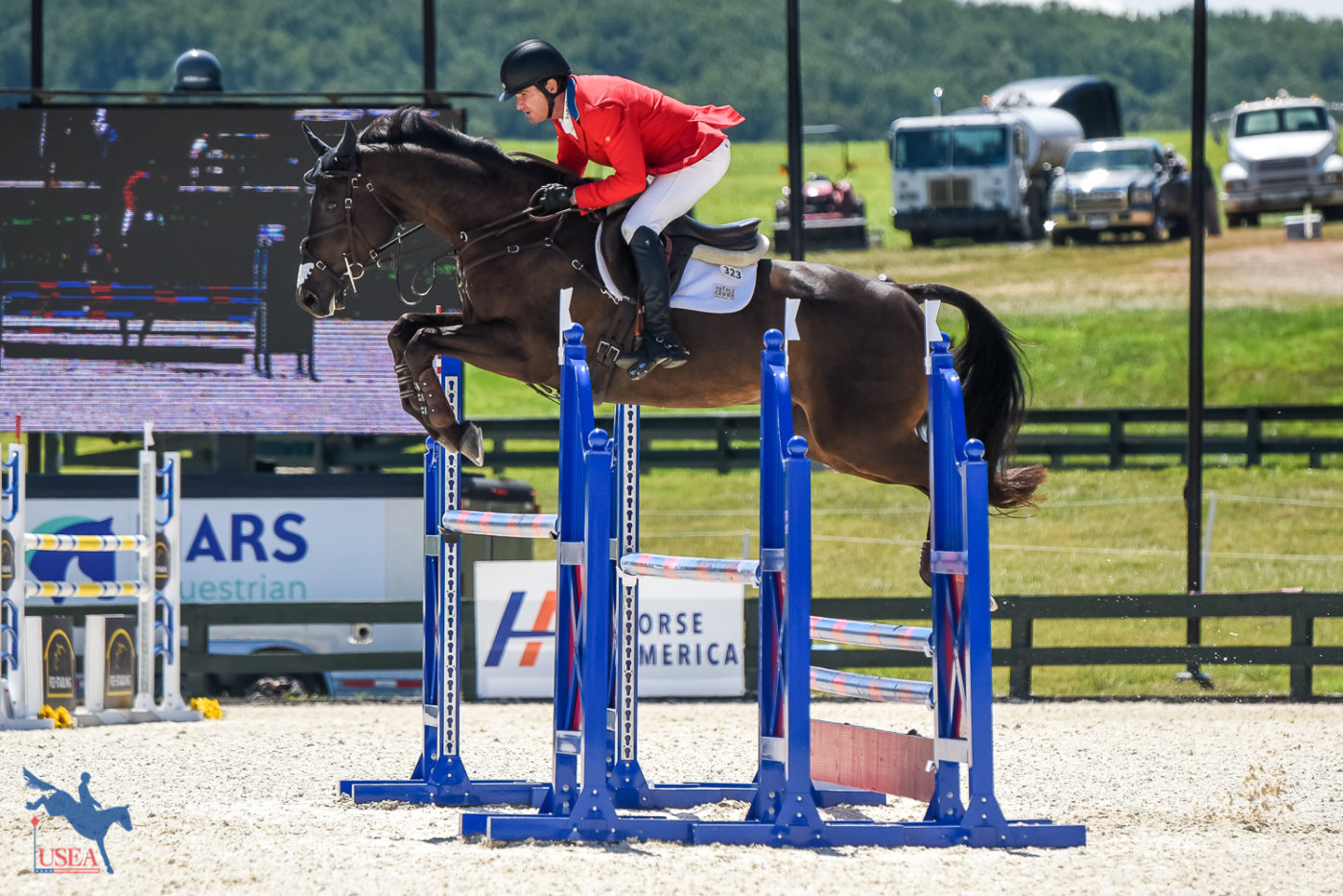