United States Eventing Association (USEA) members from all over the country gathered on Friday for the 2022 USEA Annual Meeting & Convention Year End Awards Ceremony. The afternoon’s ceremony was led by Jim Wolf and recognized riders, horses, and game-changers in the sport of eventing with multiple awards and grants.

First on the docket, Wolf recognized the winners of the 2022 USEA Classic Series Sweepstakes. Both the Training and Novice 3-Day Sweepstakes divisions were sponsored by DG Stackhouse and Ellis Saddles and winners will receive a custom-fitted Stackhouse and Ellis Saddle. Congratulations to Training 3-Day winner Ashley Kehoe and Novice 3-Day Winner Sofia Seto.

The next riders recognized were those who topped the 2022 USEA Leaderboard of Champions presented by Nunn Finer. The leaderboard recognizes many divisions within the levels from Beginner Novice through Advanced. Each winner of the rider categories will receive a beautiful keeper trophy and ribbon, and winners of the horse categories will receive an original champion stall plaque, commissioned by Indian Creek Farm of Spring Branch, Texas. The USEA is always honored to recognize the achievements of these hardworking riders and horses. Click here for the complete leaderboards.

The 2022 Sunsprite Warmbloods Volunteer of the Year is Richard Owen. Owen has provided 489 hours of volunteer service at USEA-recognized events and achieved the USEA Volunteer Incentive Program silver medal for dedicating over 1000 hours of volunteering to the sport. He will receive $1,000, a memorial trophy and ribbon, a personalized 2022 USEA Volunteer of the Year jacket, and a custom Kerrits backpack. Owen was, unfortunately, unable to attend the 2022 USEA Annual Meeting & Convention because he is volunteering again this weekend! He did, however, send in the following statement to be shared:

“I am honored to have been named the 2022 USEA Volunteer of the Year. This comes as a result of the nearly 500 hours I volunteered at USEA events mostly in Area II in Florida– and I loved every minute of it.

I am just one of the many volunteers who love this sport, who love being out with the spectators, competitors, and horses, and who love being able to give back to the amazing sport of eventing. Like many volunteers, I live a little vicariously as the riders canter past me to the jumps. I watch the riders closely, hoping to catch a glimpse to improve my own riding by seeing how it ‘should’ be done. We volunteers get the amazing opportunity to be up close and personal with the well-groomed horses and riders, rubbing elbows so to speak. We are truly appreciative when the competitors and coaches take a few seconds to thank us. We are thrilled when the competitors engage us in a brief conversation. We feel “recognized” when a rider even just waves to us as they are heading back to the barn. These gestures mean a lot to the volunteers. It drives the thoughts that they aren’t just cheap help but that they are a real part of the show, that they are really appreciated, and that they belong. It’s called the eventing community for a reason. And that is why we volunteer.”

RevitaVet sponsored rider Tamra Smith presented the Linda Moore Trophy to the 2022 RevitaVet USEA Young Rider of the Year Cassie Sanger. Sanger received $1,000, a memorial trophy, and a RevitaVet System including a pair of hock savers and poll cap.

The Windfall Trophy was presented to the 2022 SmartPak USEA Stallion of the Year Geluk HVF (Jazz x Bronte HVF), the 11-year-old Dutch Warmblood Stallion owned and ridden by Bethany Hutchins-Kristen from Reddick, Florida. Along with the trophy, the recipient also receives $1,000 and an embroidered Stallion of the Year SmartPak show cooler.

After a remarkable year maintaining a top ten finish in all entered events and overall win at the Carolina International CCI4*, Team Rebecca LLC and Four-Star Eventing Group’s 12-year-old Irish Sport Horse gelding Dondante (by Pacino), ridden by Will Coleman, was recognized as the 2022 Standlee USEA Horse of the Year. Dondante received the Caser Trophy, $1,000, and a certificate for $1,000 in Standlee Premium Products.

For the second year in a row, Tamra Smith was awarded the title of 2022 Bates USEA Lady Rider of the Year after an impressive year with top finishes at Galway Downs, Ram Tap, the Fork, Badminton, Maryland, and the FEI World Equestrian Championships in Pratoni. Smith received the Essie Perkins Trophy, $1,000, and a Bates Saddle.

The standings were extremely tight for the title of the 2022 World Equestrian Brands USEA Rider of the Year with the top three riders being separated by a single point. In the end, it was Boyd Martin who was dubbed the recipient of the Windy Acres Farm Trophy, $1,000, a memorial trophy, and a World Equestrian Brands prize pack including an Equilibrium Therapy Magnetic Rug and Equilibrium Stellar Head Collar. This is Martin’s sixth time earning this title.

Following the presentation of the leaderboard winners, Wolf shifted gears and began announcing the recipients of this year’s grants and scholarships. First to be awarded was the USET Connaught Grant, which is designed for a horse competing at the CCI2* or CCI3* level who shows potential to one day be on the U.S. Team and is presented in memory of Bruce Duchossois. The USET Foundation awarded the 2022 Connaught Grant to Caroline Martin and her mount HSH Blake (Tolan R x Doughiska Lass), a 7-year-old Irish Sport Horse gelding owned by Molly Hoff and Sherrie Martin.

USEA Foundation Chair Diane Pitts took to the stage to issue the 2022 USEA Foundation Grants, starting with The Wilton Fair Fund, which is donated by David and Cheryl Lenaburg with the goal of supporting U.S. developing riders. The Fund allows grants to be given each year for a variety of educational opportunities for riders 29 and under who have not yet ridden for a senior team. This year’s grant recipient was Hallie Coon.

The $5,000 Haller Educational Grants for Eventing Officials were awarded to Heather Gillette and Ashley Johnson. The $10,000 Essex Grant was awarded to Cornelia Dorr and Julia Crandon was awarded the $5,000 Seema Sonnad Junior Rider’s Grant. The recipient of the Mike Huber Award is able to identify a USEA Area Young Rider program to receive a $500 donation from the USEA Foundation. This year’s recipient was John Bourgoin of Area 1.

Pitts was joined onstage by Judy McGaughan and Karen O’Connor to deliver the first-ever Packy Prize in memory of Packy McGaughan. The honor of winning the award in its inaugural year went to Peter Gray.

Generously provided by the Broussard Family and the Broussard Charitable Foundation Trust, the Going Forward Grants recognize USEA members who are passionate about moving their commitment to the sport forward. Members of the Broussard Family and Broussard Charitable Foundation Trust joined the stage to recognize Janice Binkley and Rebecca Caulfield, who were awarded the USEA Eventing Coaches Program Certification Grant, and Alison Eastman-Lawler, Colleen Rutledge, and Mallory Stiver who all received the Eventing Officials “r” Training Program Grant.

In addition to the Going Forward Grants, the Broussard Family and Broussard Charitable Foundation Trust also had the honor of presenting the 2022 Broussard Developing Rider Grants. Six riders were awarded the National Rider Grant worth $10,00 each to put towards their continued education. Those six riders are as follows: James Alliston, Rebecca Brown, Valerie Vizcarrondo Pride, Kaylawna Smith-Cook, Dani Sussman, and Chris Talley.

The Amateur Impact Award is presented to an Adult Amateur that embodies a dedication to the sport of eventing and shares outstanding sportsmanship. The 2022 recipient of this award was Stephanie Tassos Reimers.

Presented to outstanding owners who make exceptional influences on the careers of riders and their horses, the As You Like It Owner’s Award was presented to Nancy Winter.

The 2022 Liz Cochran Memorial Grooms Award salutes the well-earned recognition of the individuals responsible for the wellbeing of our horses. Working tirelessly behind the scenes, the grooms are indispensable to both the competitor and above all, the horses. This year's Liz Cochran Memorial Grooms Award was presented to Hailey Burlock and Erin Jarboe, who groom for Will Coleman.

The final list of awards to be presented were the USEA Appreciation Awards. The Courtney C. Reeves Memorial Trophy is awarded to a young individual who exemplifies sportsmanship and the spirit of the sport and who gives back to the sport. This year, that award was presented to Hayden Drager.

Recognizing members 60 years of age and over who are competing at any level in USEA-recognized competitions and show great sportsmanship, the Vintage Cup is a unique award. This year, three Vintage Cup recipients were named: John Meriwether, Sally Holman, and Suz Roehl.

Similar to the Vintage Cup, the Ironmaster Trophy is awarded to individuals in the sport who exemplify fortitude and courage. This year’s award recipient, Sandra McDonald, received a standing ovation for her unrelenting courage and determination as she combatted cancer and rode throughout her chemotherapy treatments.

The Sue Hershey Award, in honor of Sue Hershey for her time and dedicated efforts to the development of the USEA Eventing Coaches Program, recognizes an ECP Instructor who exemplifies the values and commitment of the program as well as inspires students to achieve their goals. This year’s recipient was Christian Eagles.

During every Hall of Fame celebration year, the USEA recognizes two additional award categories for the hard-working individuals who work behind the scenes of our cross-country courses. The 2022 Posthole Digger award was bestowed upon Tyson Rementer and the 2022 Neil Ayer Course Designer Award was awarded to Derek di Grazia.

The final award of the afternoon, the Wofford Cup, is awarded to those who have given so much to the sport of eventing that they rise to the very top. Wofford Cup recipients are known for dedicating the betterment of their life to eventing, and the 2022 recipient goes far beyond that standard. This year, the 2022 Wofford Cup was presented to former USEA CEO Jo Whitehouse.

About the USEA Annual Meeting & Convention 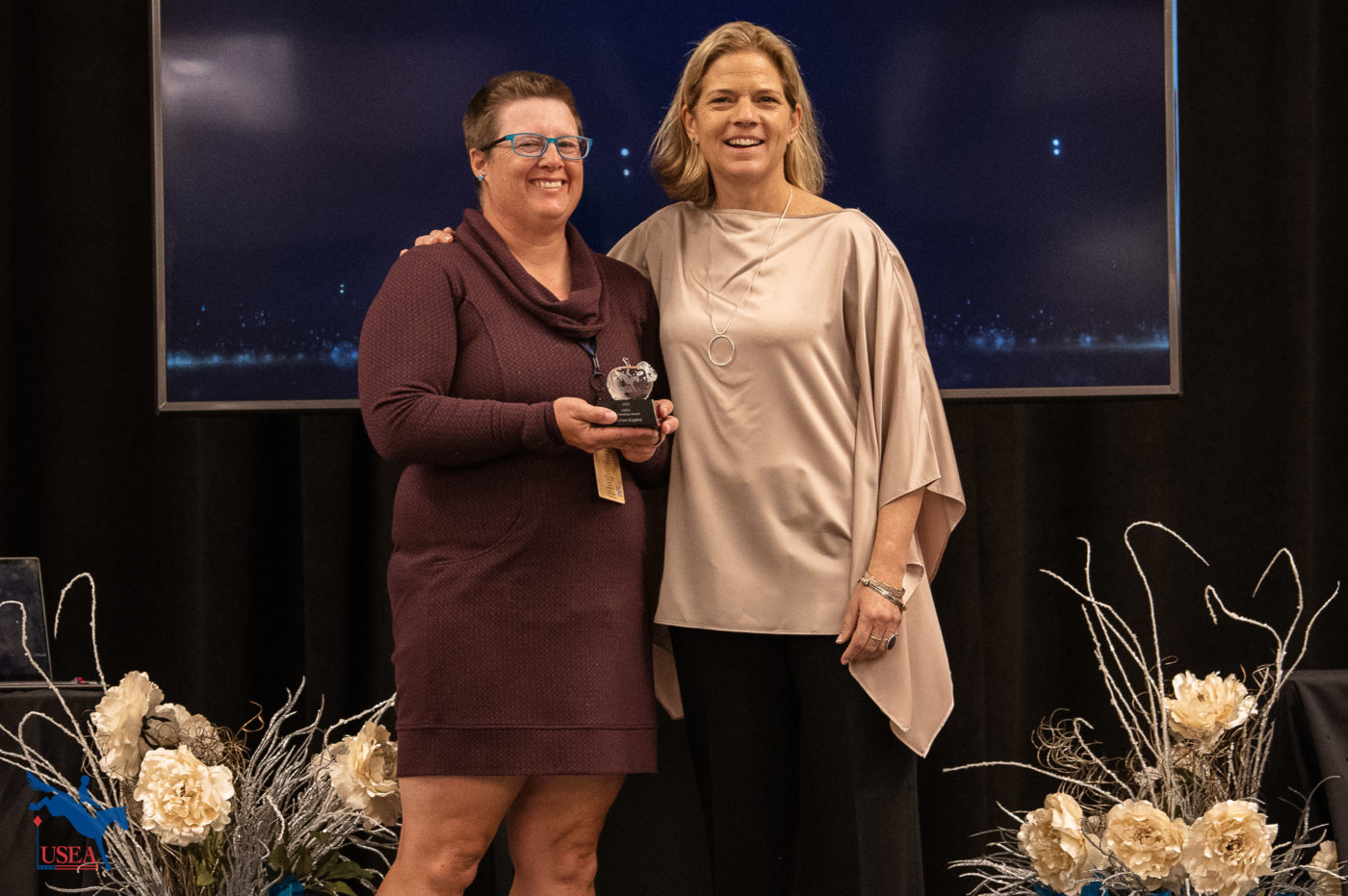 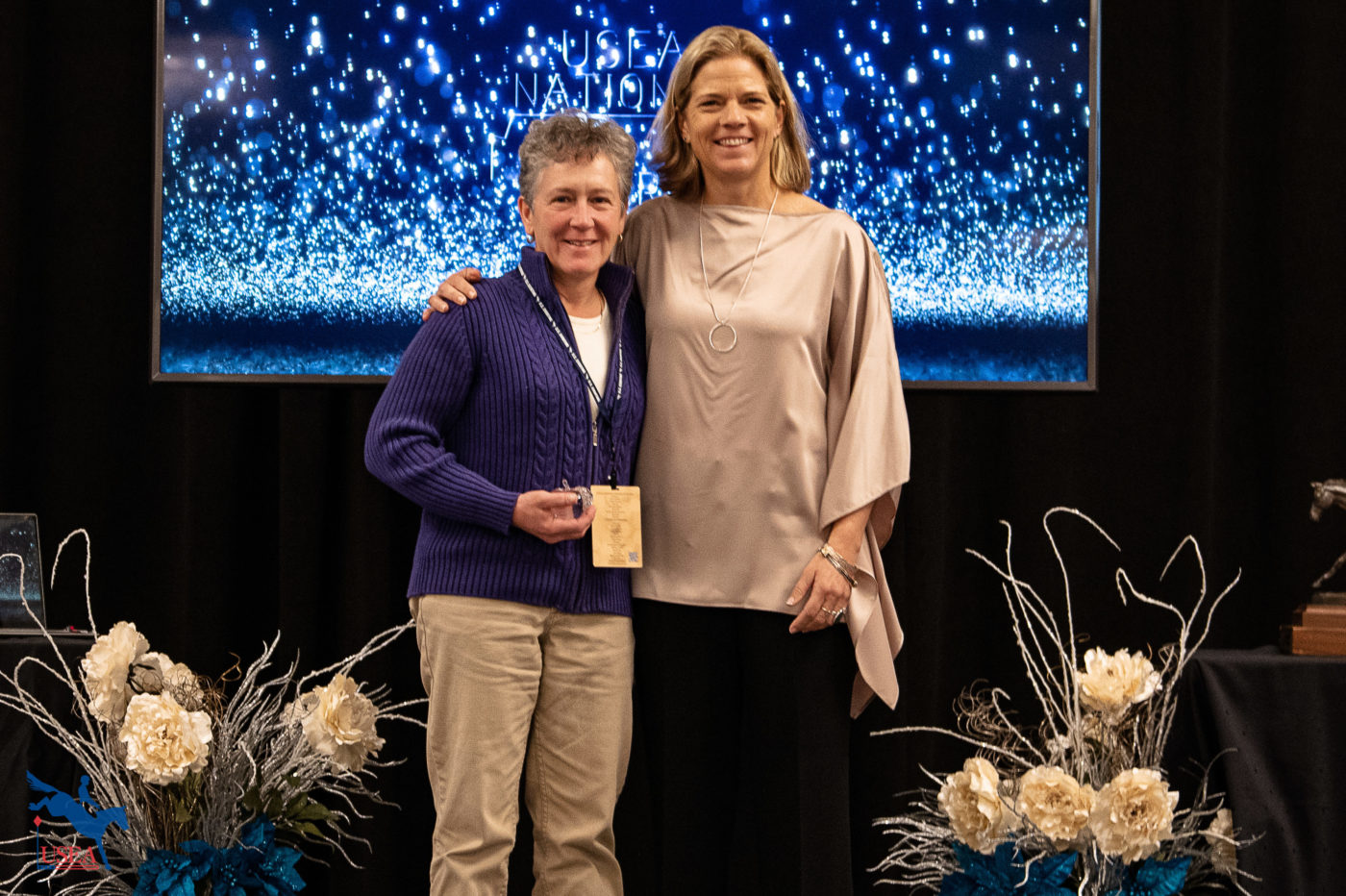 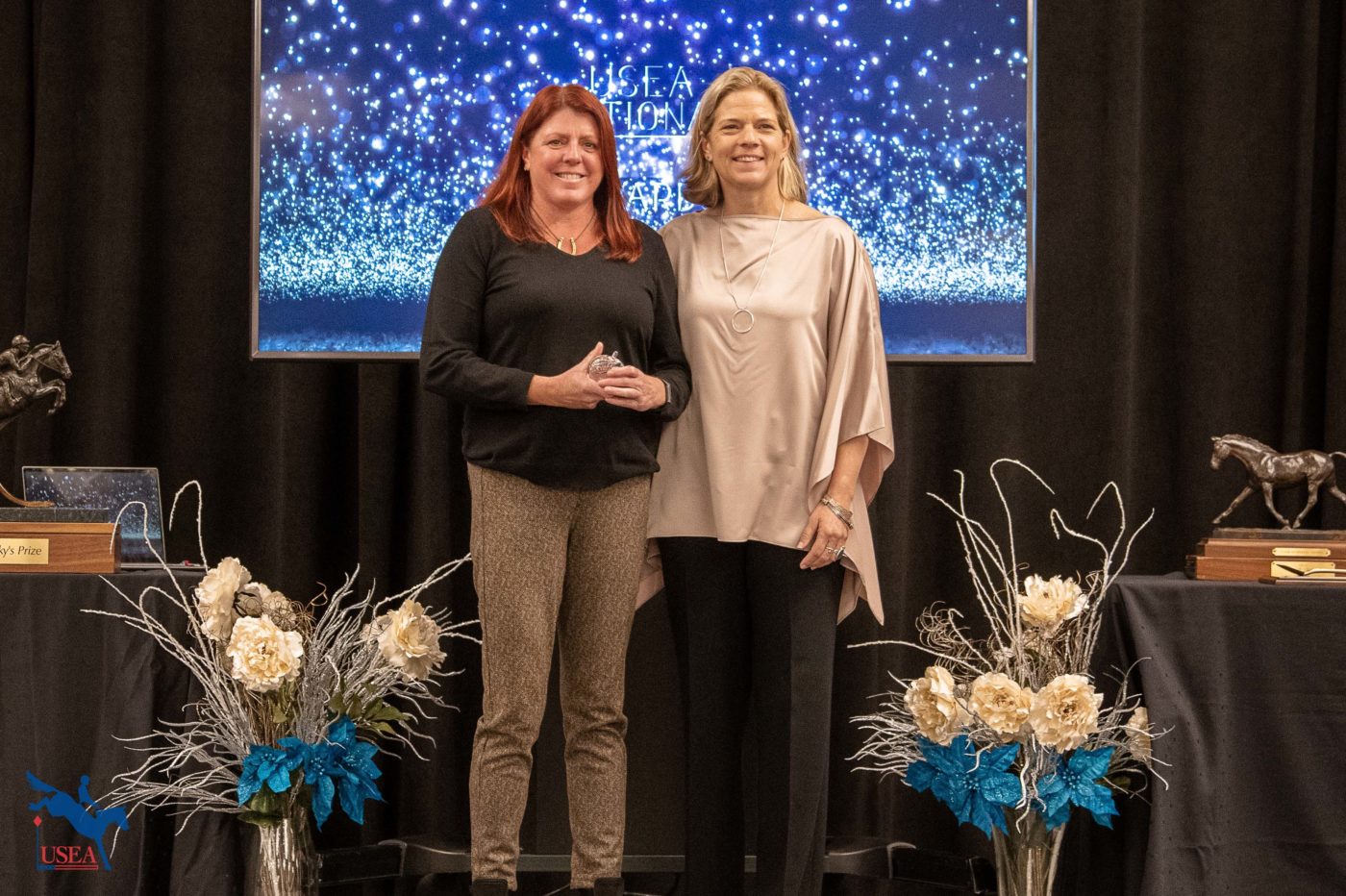 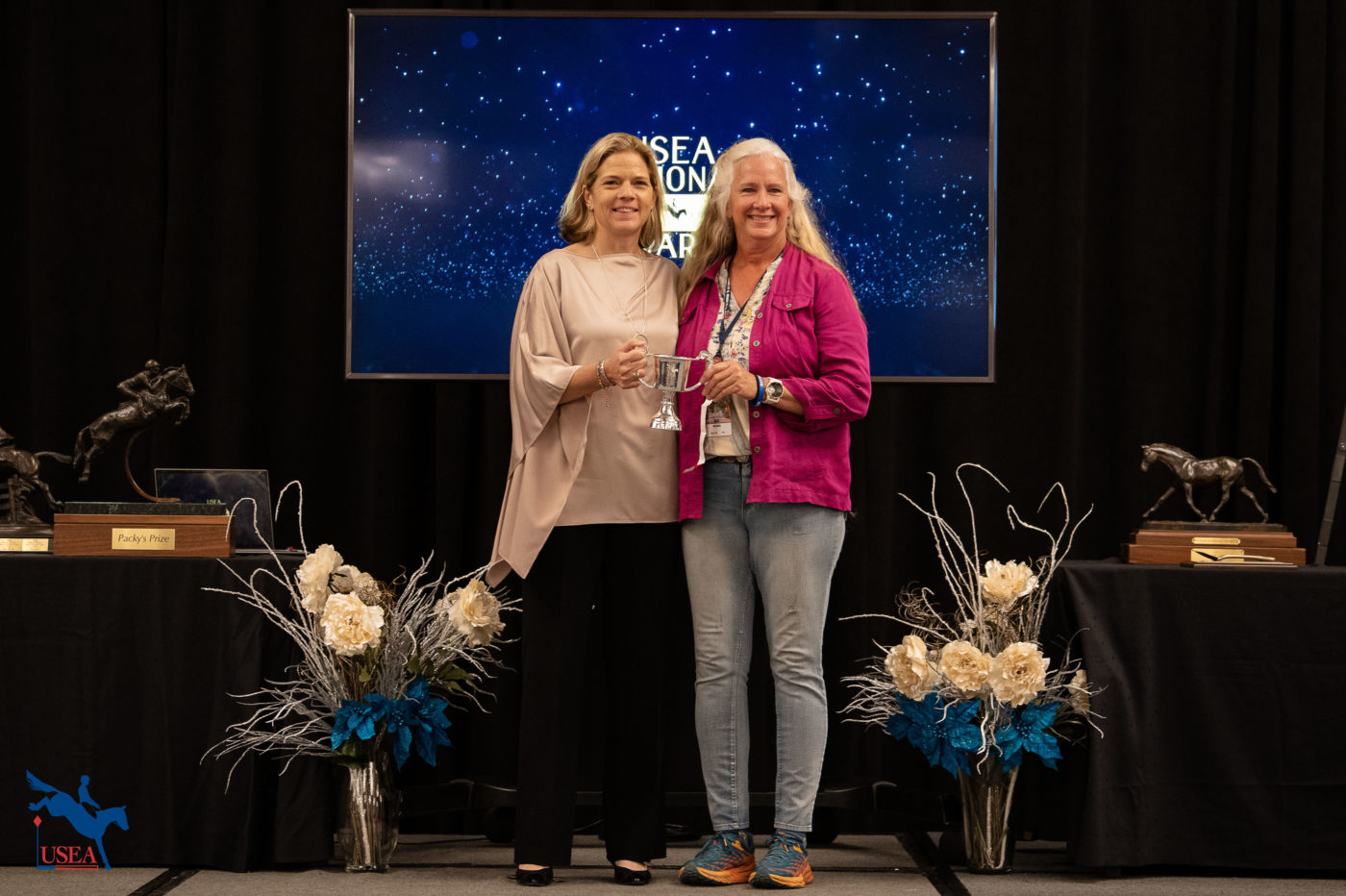 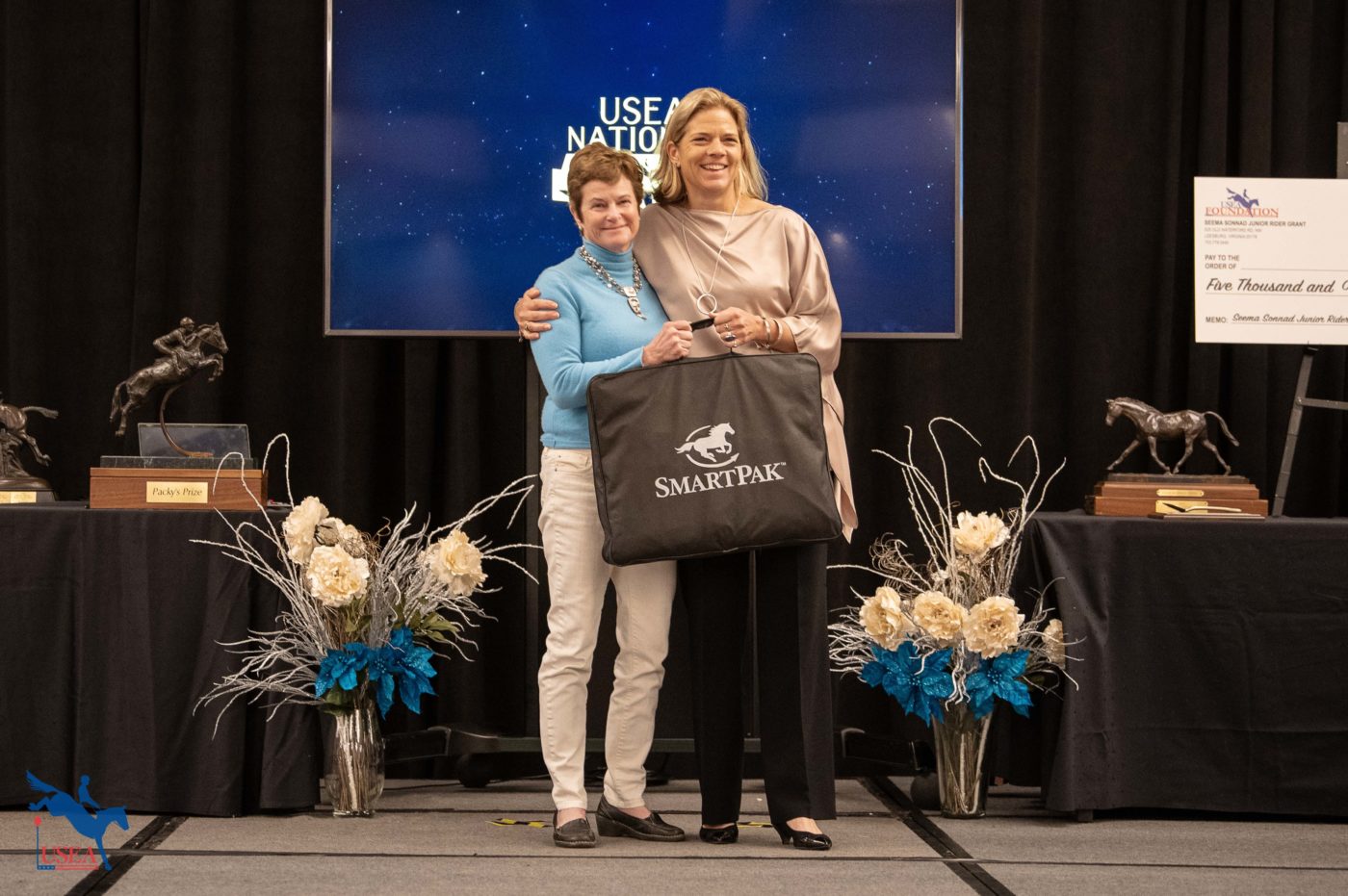 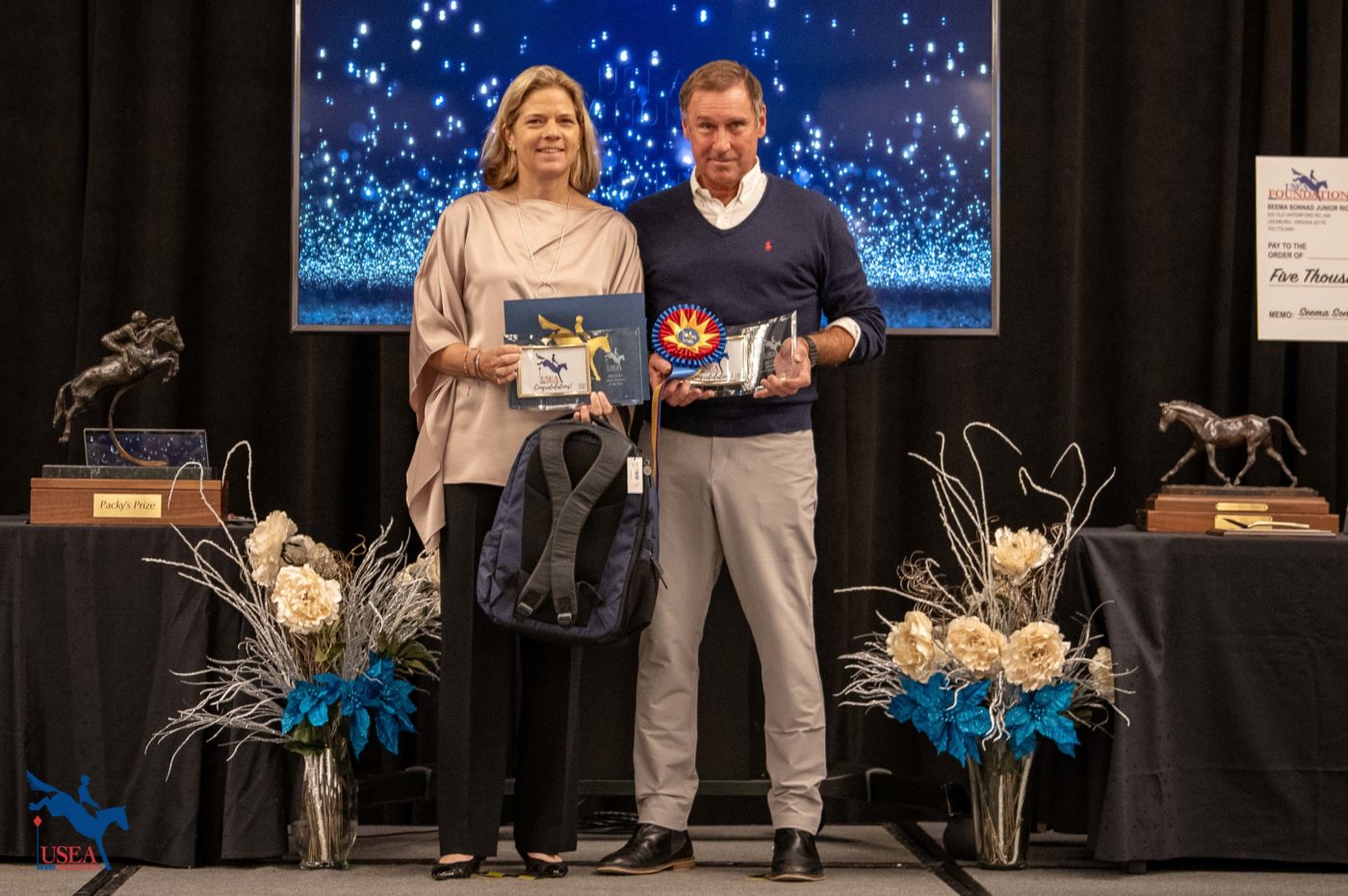 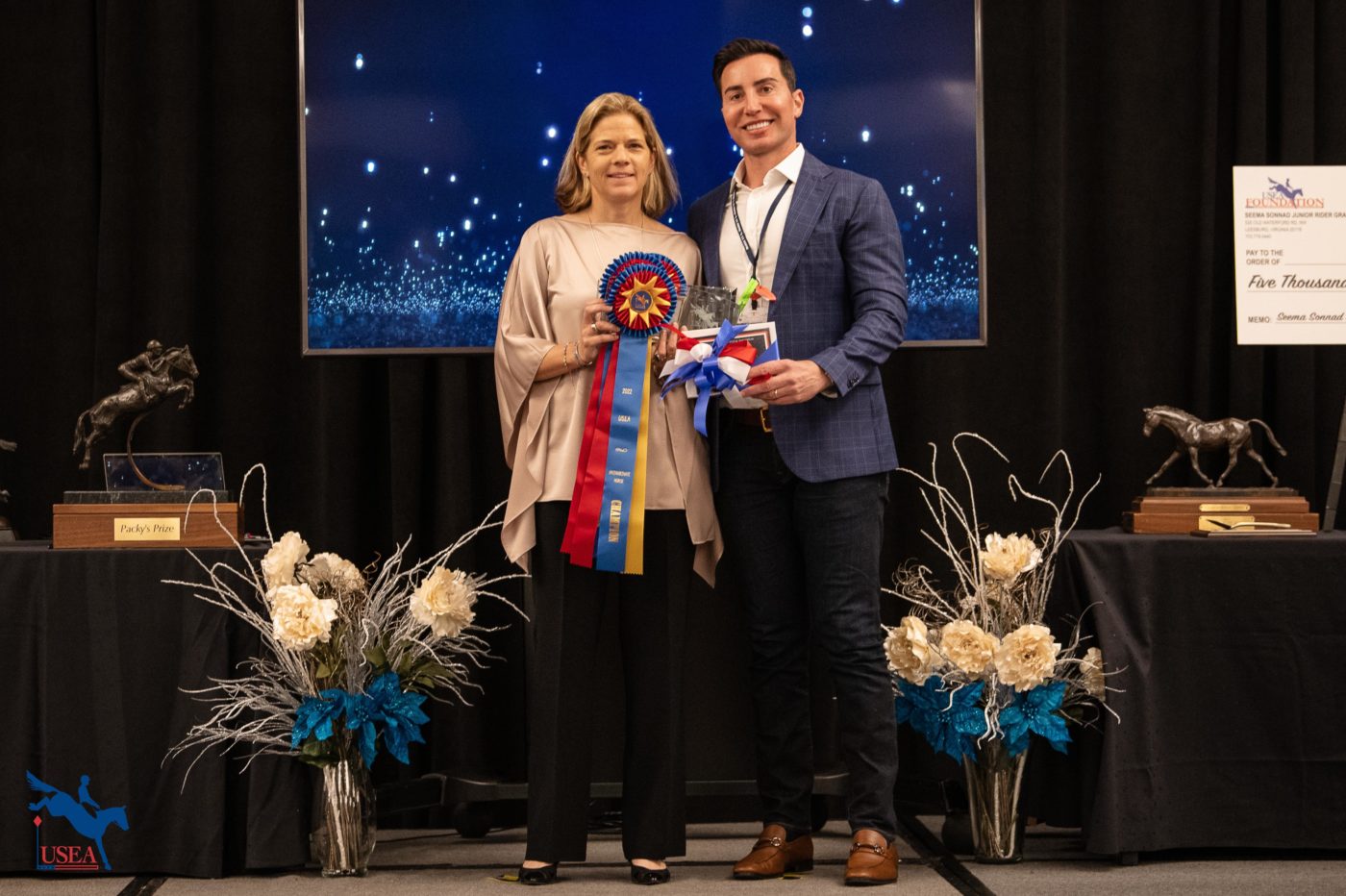 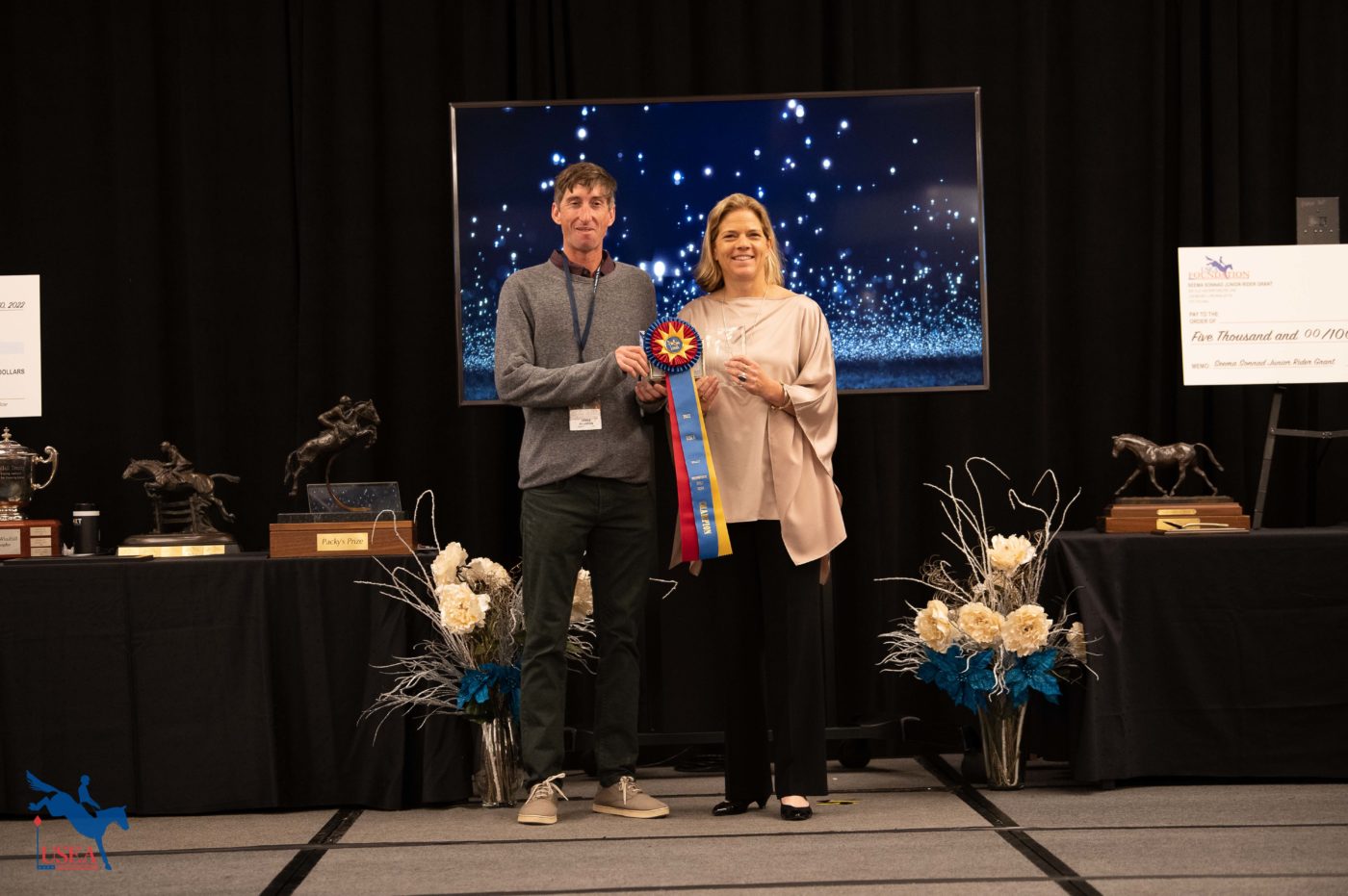 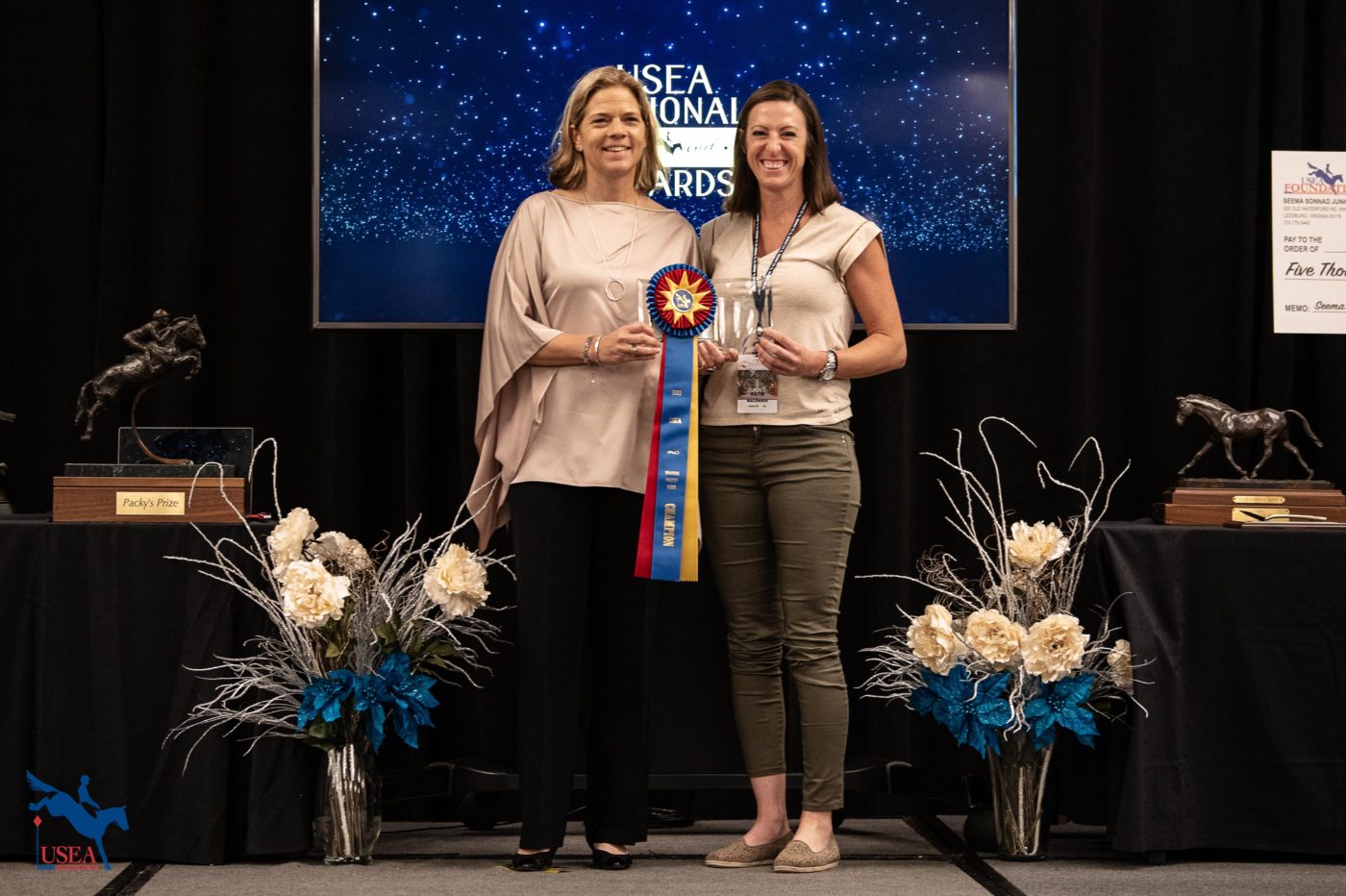 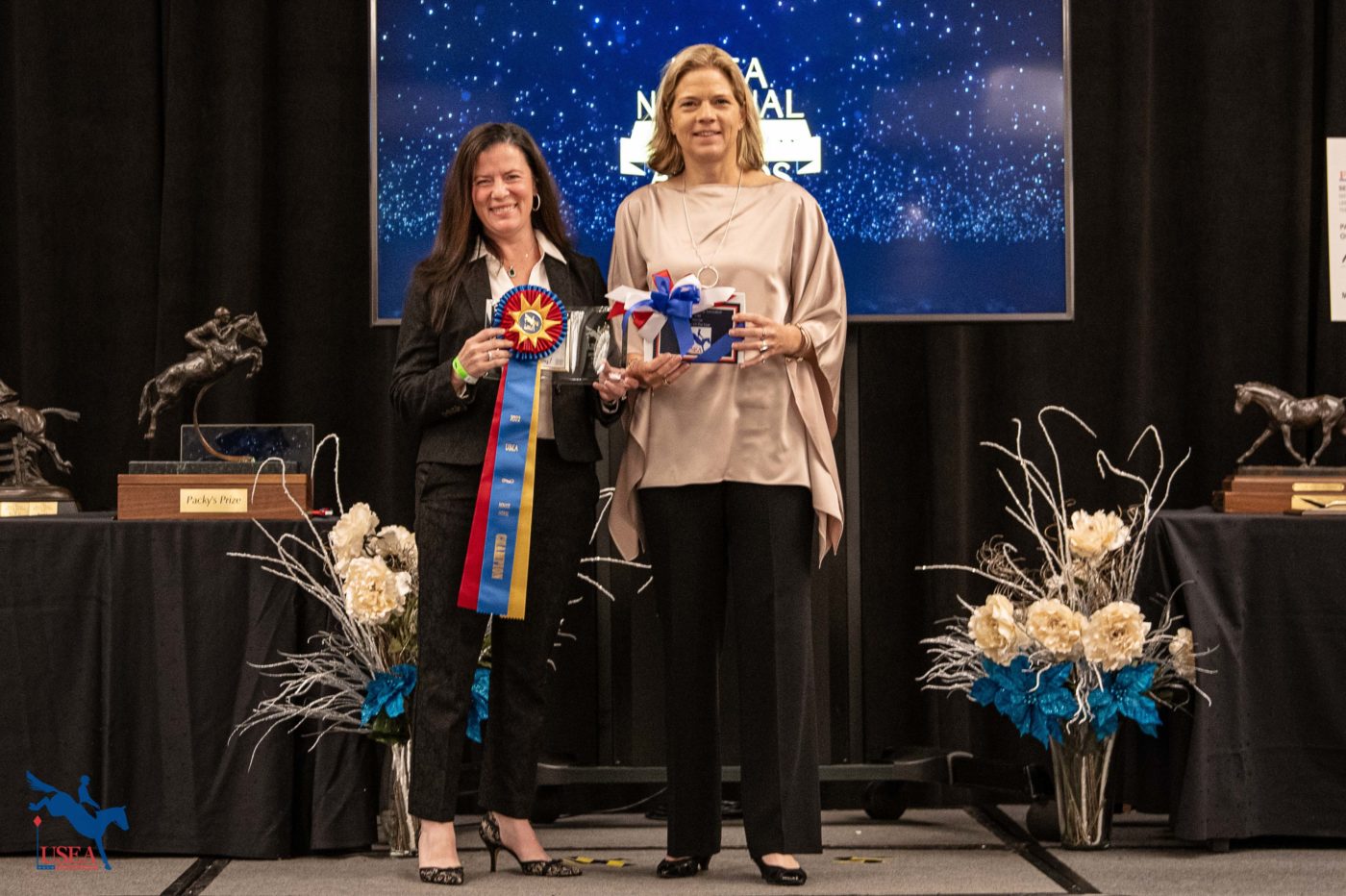 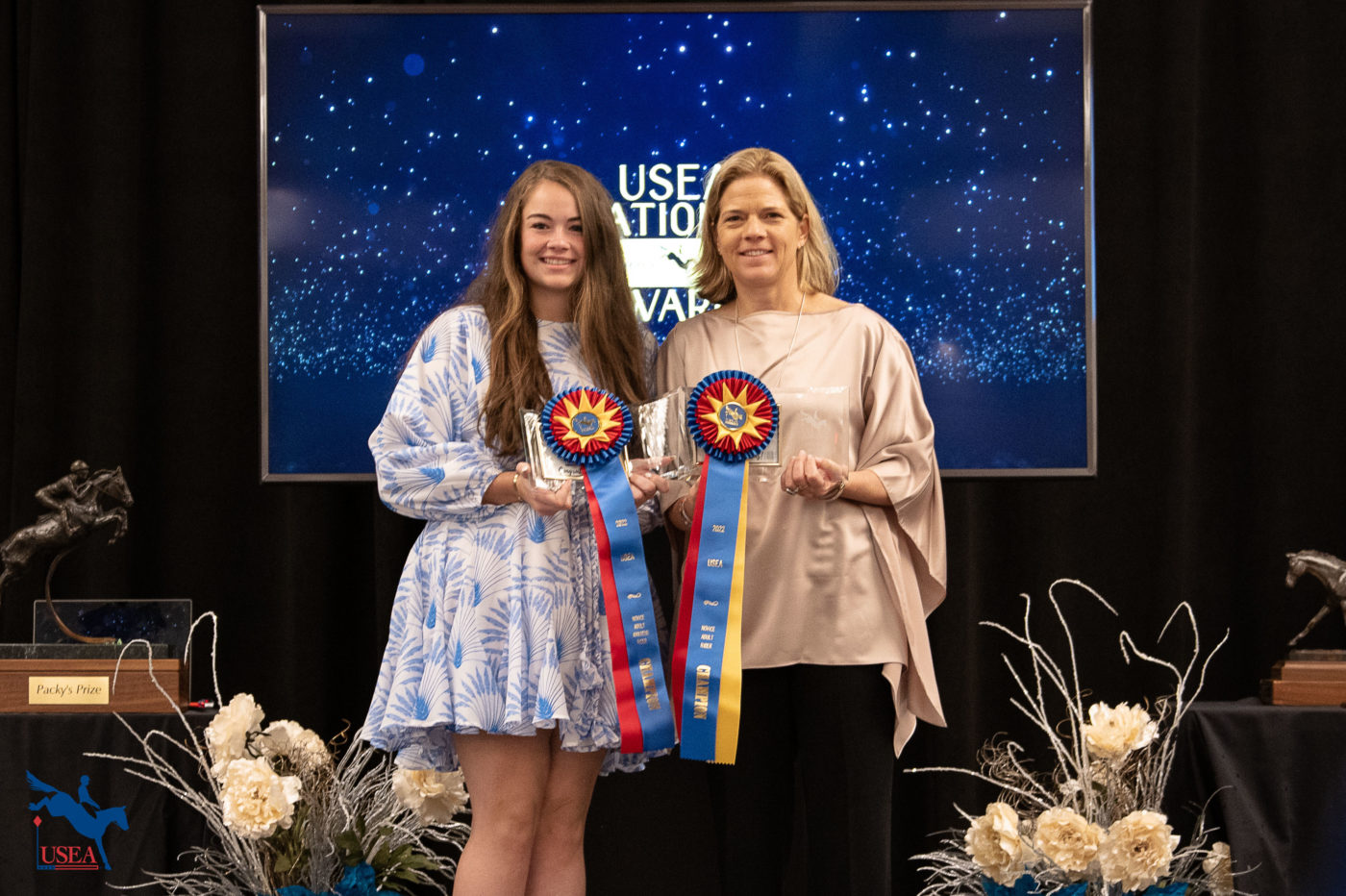